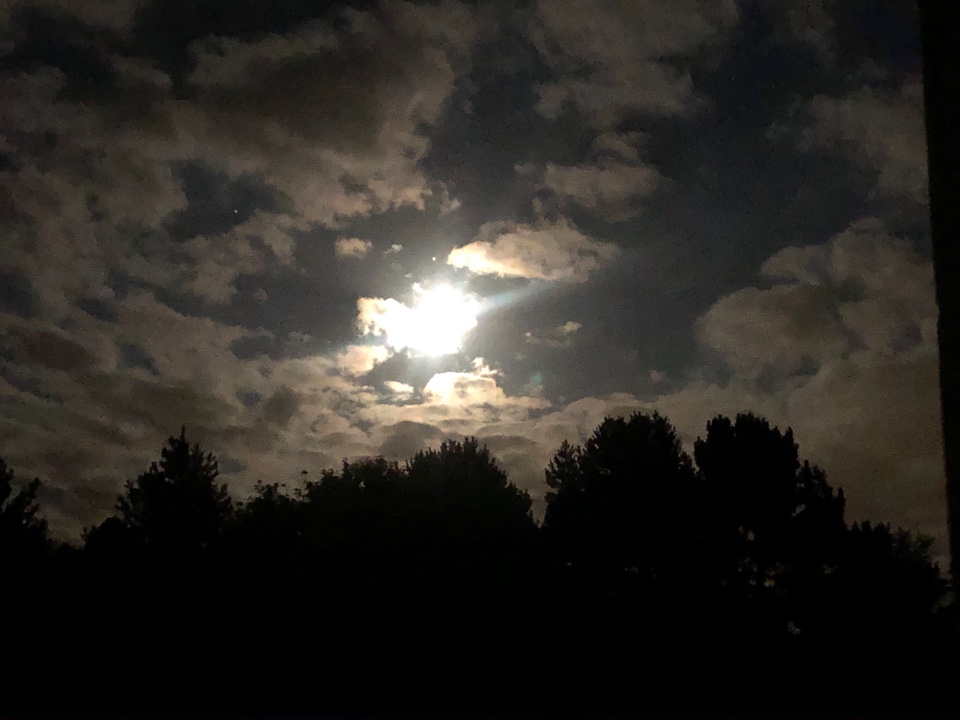 I hope this finds you well, and coping with all that’s going on around us.  We seem to have been living in a world of contradictions of the last couple of weeks – conflicting reports about Covid, weird and wonderful weather, and a question mark hanging over us as to how best we are to contend with it all. Holding on to what I know of some kind of routine makes it easier. I will be honest though, since I was poorly last month, I’ve not really felt very safe going for my walk on my own so most of the exercise I’ve done recently has been in the garden. We have a fair bit of lawn to mow, and the number of pots I have has increased over the last few years. Colin also added the water feature last year, which I planted out in May and thanks to a fair bit of watering and of course Richard Jackson’s Flower Power, it’s looking pretty healthy.   This year though Colin’s really put a lot of time into the garden, and has made the very best of what was a really dull and barren part of it by building this pergola and creating two more flower beds. 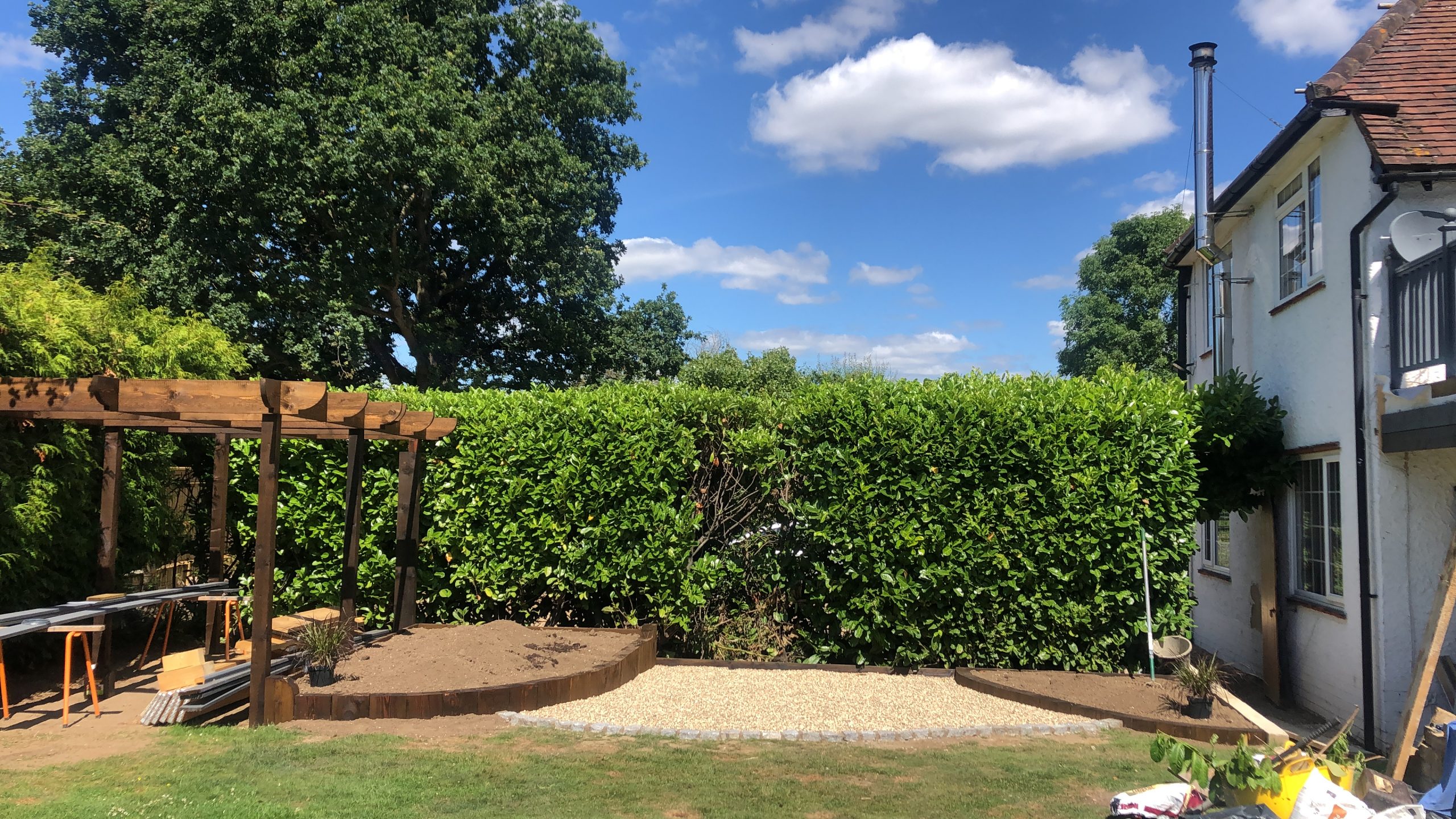 We plan to put gates in the middle of the laurel hedge there so will be another entrance into the back garden.  You may have heard me comment on my Saturday night story reading that I’ve had to move around the house to avoid the banging and sawing noises.  Not that I’m complaining as it’s going to look great when it’s all planted out, and the family were so impressed when they visited recently, that he’s now got an order from my Lucy and his son Dan to make them pergolas too! 🙂 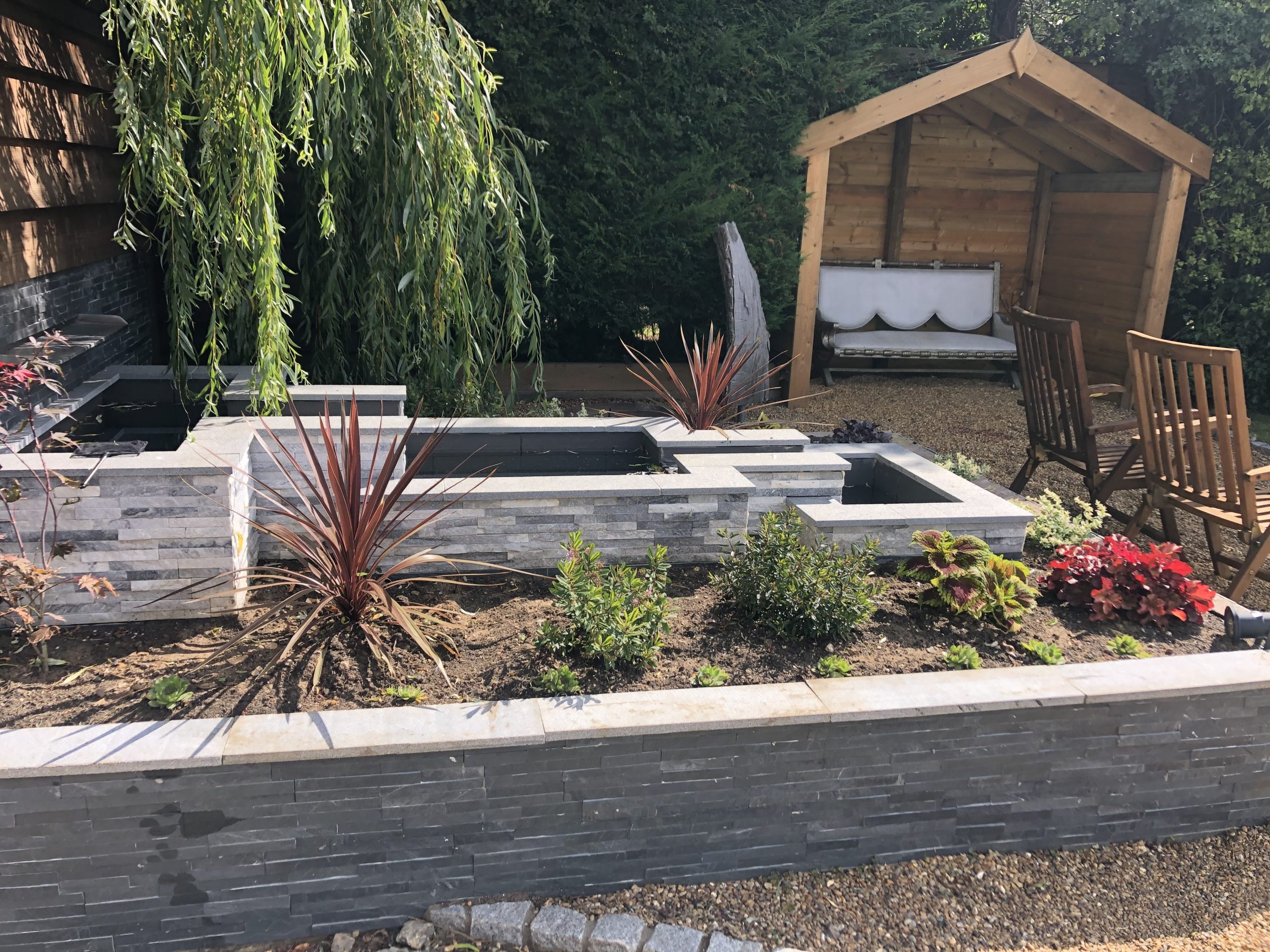 I’ve almost finished sanding down the little table to go with the chairs I’d renovated last month, and then that will be the last of the garden furniture sorted.  Mind you, I’ll have to re-treat them all before the winter otherwise the wood may suffer.  I can completely see why man-made patio furniture is such a popular choice, and if you have some, you may well be interested in our Greenworks G30 Home and Garden Pressure Washer (520931). I think it’s got to be the best price I’ve seen one for at just £119.97 and it comes with all kinds of accessories like an extension lance, turbo nozzle, foam sprayer and patio cleaner and brush.  Because it’s on a little trolley it’s easy to move around and it will be our Today’s Special Value this weekend, launching with Tommy Cross and I on Saturday the 8th at 9pm.  Keep an eye out on Instagram, Twitter and Facebook though as I’ve been promised one to have a play with before Saturday, so that could be interesting! 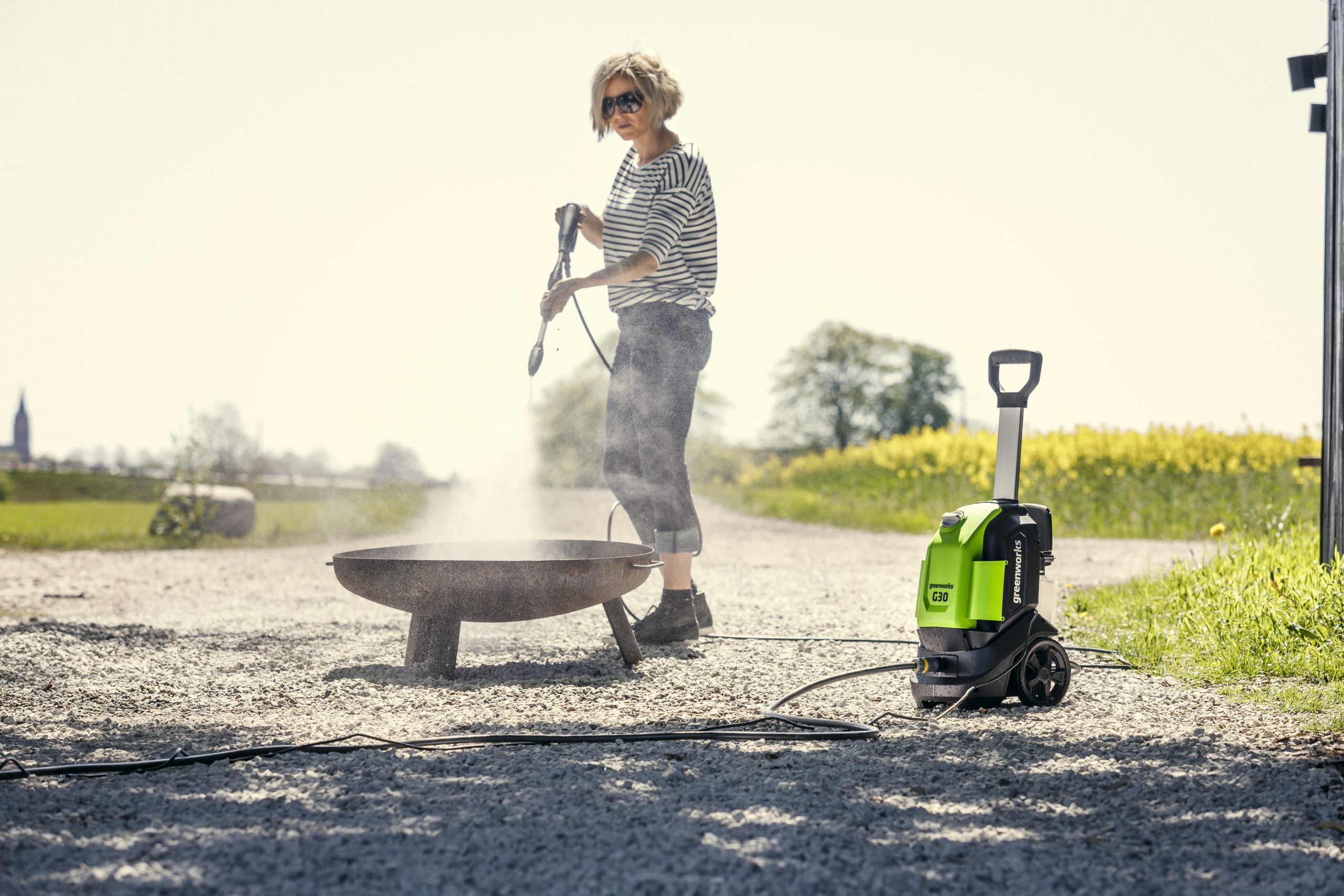 We had a bit of a family relay the weekend before last for Calla’s fourth birthday.  Of course we’re still trying to stick to the social distancing rules and so staggered each of them arriving and leaving but in spite of all that it was lovely to have some time together.  Last year I made Calla a PJ Masks cake as that was her choice.  This year….. Morph!  Hands up though – I only made the cake – the fabulous decoration of Morph himself was made by Granddad Colin.   She loved it. 🙂 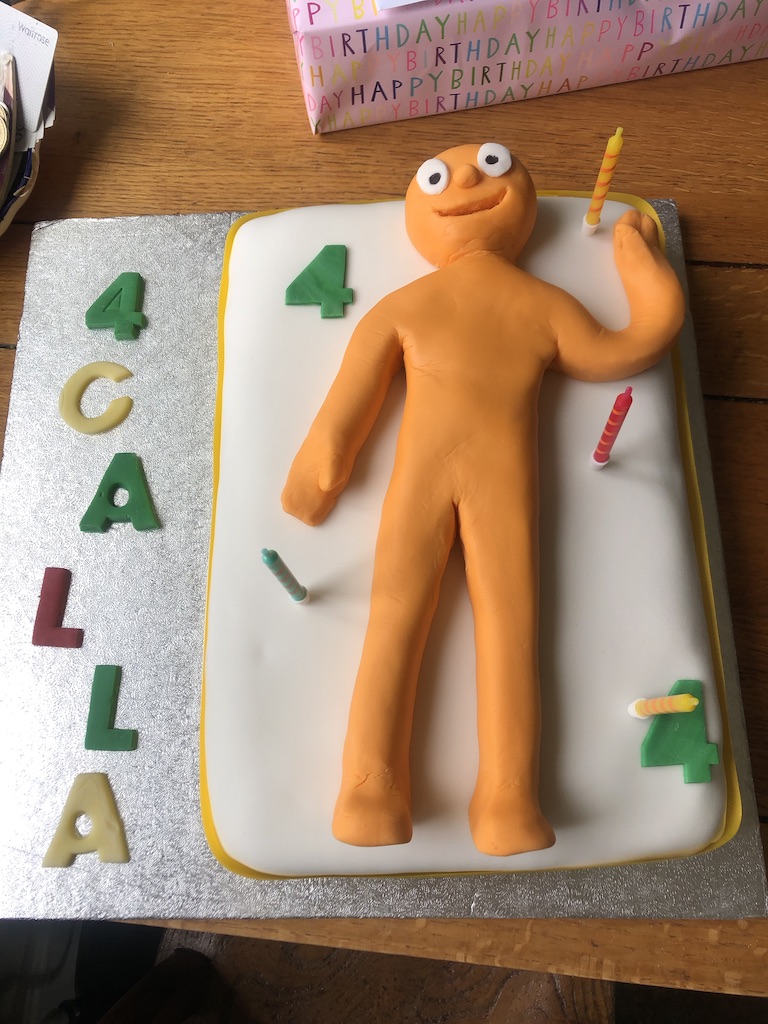 I managed to get up to see Lucy and Honey again last week, and we went to the park, played on the swings and then had a lovely meal before Honey went to bed.

Lucy and I then watched the stage production of the musical Hamilton that you can find on the Disney Channel on TV. I’d heard about it but didn’t get to see it when it was at the theatre, although I now understand why it received so many accolades! It was really quite remarkable.  Although I am not a political animal, it was very interesting to see how little interparty relationships have changed in spite of the world moving on.   People, their personalities and egos lead the way and in this particular story, this behavior leads to a truly tragic situation.  Lin-Manuel Miranda who wrote and starred in it is such a talent! I have to admit to never having heard of him until I saw the film Mary Poppins Returns where he plays a very original version of the character Bert. I have always enjoyed musical theatre, and feel so desperately sorry for all the artists, dancers, actors, make up artists, costume makers, set designers, producers and directors who are not able to work while the theatres are closed.  And I know it’s the same for so many other industries too. Let’s pray things change soon for the better. While I was with Lucy and honey we made a little production of our own – I had taken the Aqua Laser duster set which was to be our Today’s Special Value and Honey decided she wanted to make a film about how to use it. Suffice to say she did such a brilliant job that part of this little film was used on air. We sold out before 9 am but I’m happy to tell you that if you missed out, Aqua Laser have been able to bring a few more to QVC on advanced order.

Keep your eyes peeled for some great fashion too!  One of my favourite brands who are famed for their fabulous gaucho jumpsuits – Coco Bianco – have a beautiful longline linen mix shirt dress (185488) for under £38. It is a Today’s Special Value from Wednesday and comes in a number of different colours.  Perfect for wearing now and certainly through into the autumn. You could team it up with any of the Phase Eight cropped trousers or maybe Ruth Langsford jeans? And don’t forget our selection of sandals and sneakers – have a look on QVCUK.com and you’ll be spoilt for choice with brands like Moda in Pelle, Vionic, Marc Fisher and Sam Edelman. 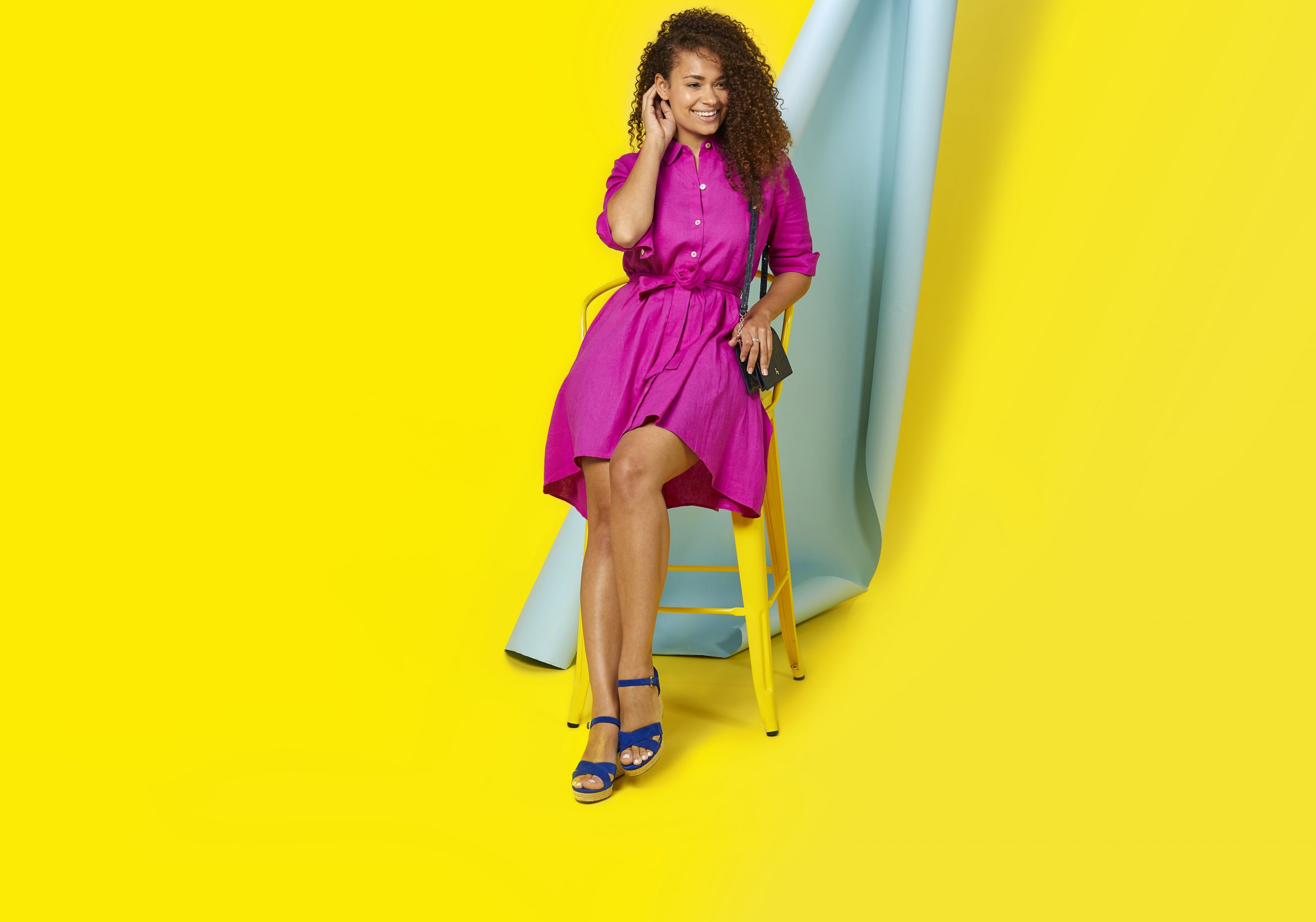 One last bit of news to share.  We have pigeons nesting in our porch-like shelter that sits against the back wall of the house. We keep the garden chairs and cushions in it, and we also have a very large pair of audio speakers on top of the cupboard for whenever we play music in the garden.   The nest is right on top of one of them.  You can just see mama pigeon balanced on the nest and peeping over the edge of the speaker!  A pair of them spent days flying in and out of the porch with ridiculously large pieces of twigs and sticks and have made the most untidy nest I’ve ever seen! . We didn’t have the heart to dismantle it early on, and it’s too late now as she’s definitely sitting on eggs. I cannot begin to imagine the mess once the baby birds start pooping everywhere! Still, it could have been worse…. there was a report in the National Geographic last month that had a fabulous photograph of wild white storks nesting on the Knepp estate in West Sussex – they had five chicks and apparently it’s the first time in centuries they’ve done so in the UK! 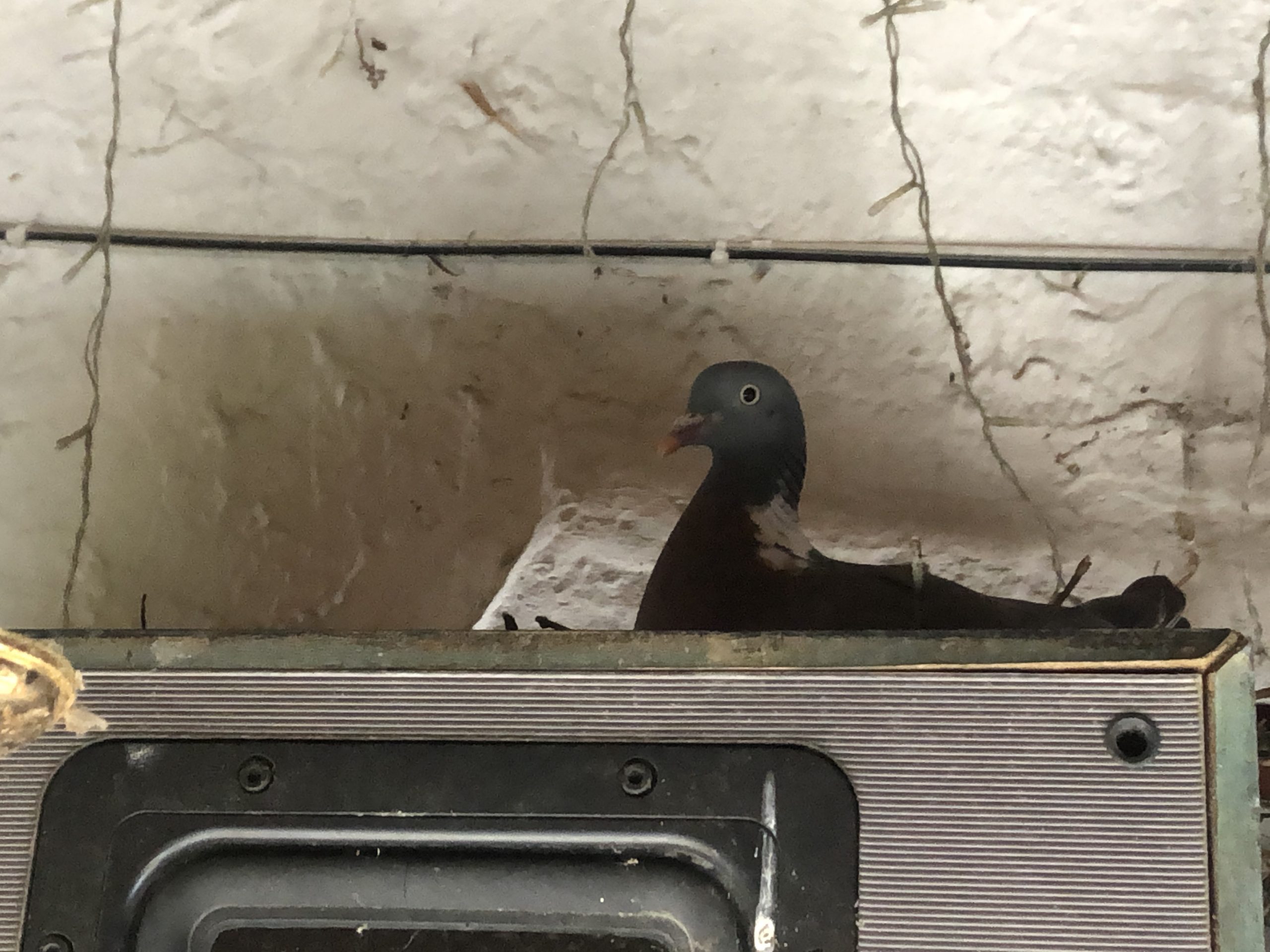 Thank you so much for writing to me last month, and I hope you’ve found my response.  Do keep in touch again this month, and don’t forget my weekly story on Instagram and Facebook – it’s nice to have an opportunity to escape the world every now and then.  Take care and stay safe, 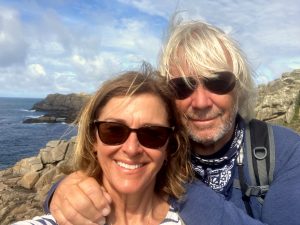 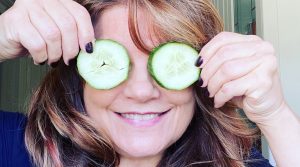 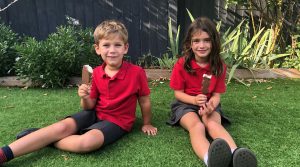 It’s shaping up to be a sunny autumn