Menu
Stories > Presenters > Julia Roberts > Are you a chocolate or a cheese lover?

Are you a chocolate or a cheese lover? 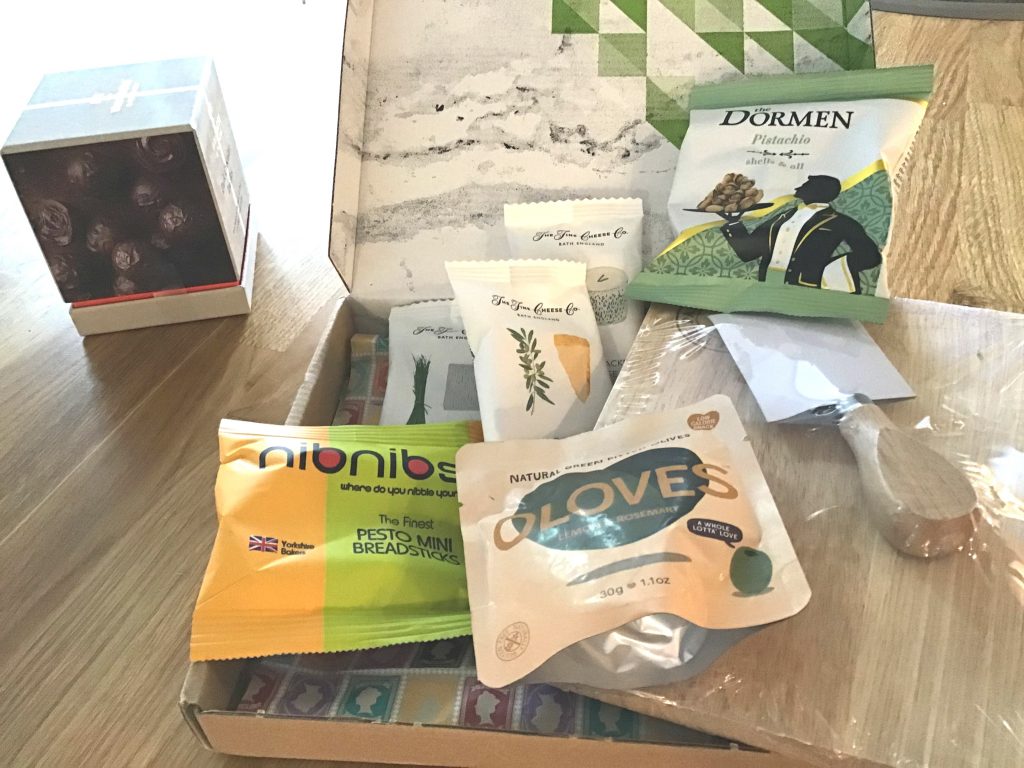 It’s Valentine’s Day; Chris and my first as a married couple and I’m hobbling around on crutches so not very romantic! We’ve never been ones for huge romantic gestures (apart from the year he bought me my heart-shaped ruby and diamond ring!), but we always get each other cards and small meaningful gifts. As I’m still not allowed to put any weight on my left foot (ankle update later) I can’t leave the house, so Chris, knowing how much it would bother me not to get him a card, bought one for himself and presented me with it last night to write to him. The thing is, I had ordered one online, proving once again that internet and TV shopping really are a godsend for housebound people. 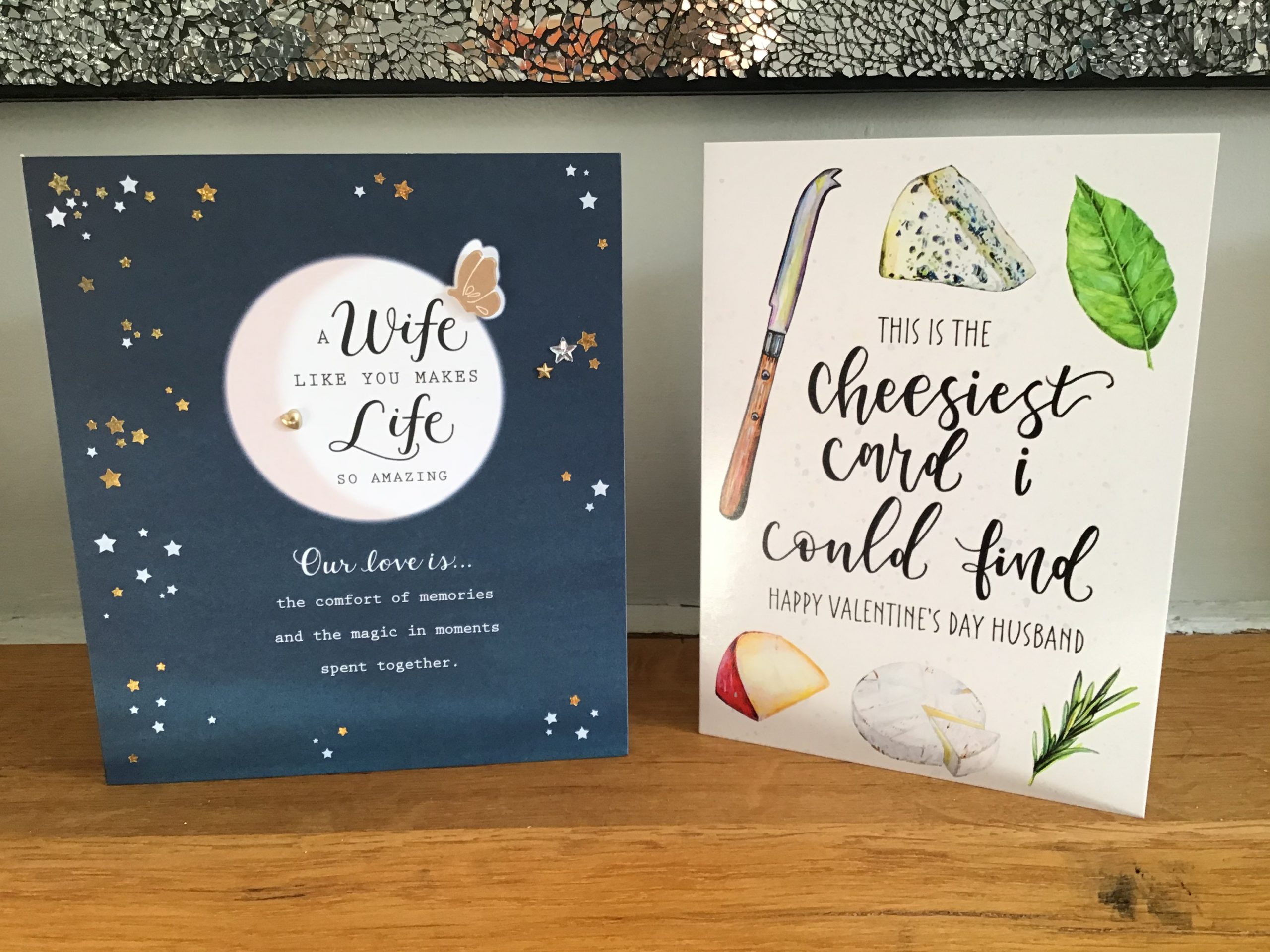 I like cheese, but Chris absolutely LOVES it so this card was perfect for him and I also ordered him a box of goodies for the cheese lover. All he needs to add is the cheese: Manchego, Cheddar, Saint Agur blue, Wensledale and Cranberry and of course the delicious Snowdonia cheeses we sell at QVC – I’m pretty sure I’ll be helping him to devour the crackers, nuts and olives to accompany all that cheese! He can take or leave chocolate but he’ll be sharing the box of truffles he bought me along with my lovely flowers, just in time to replace my get well flowers from my son and my boss at QVC. 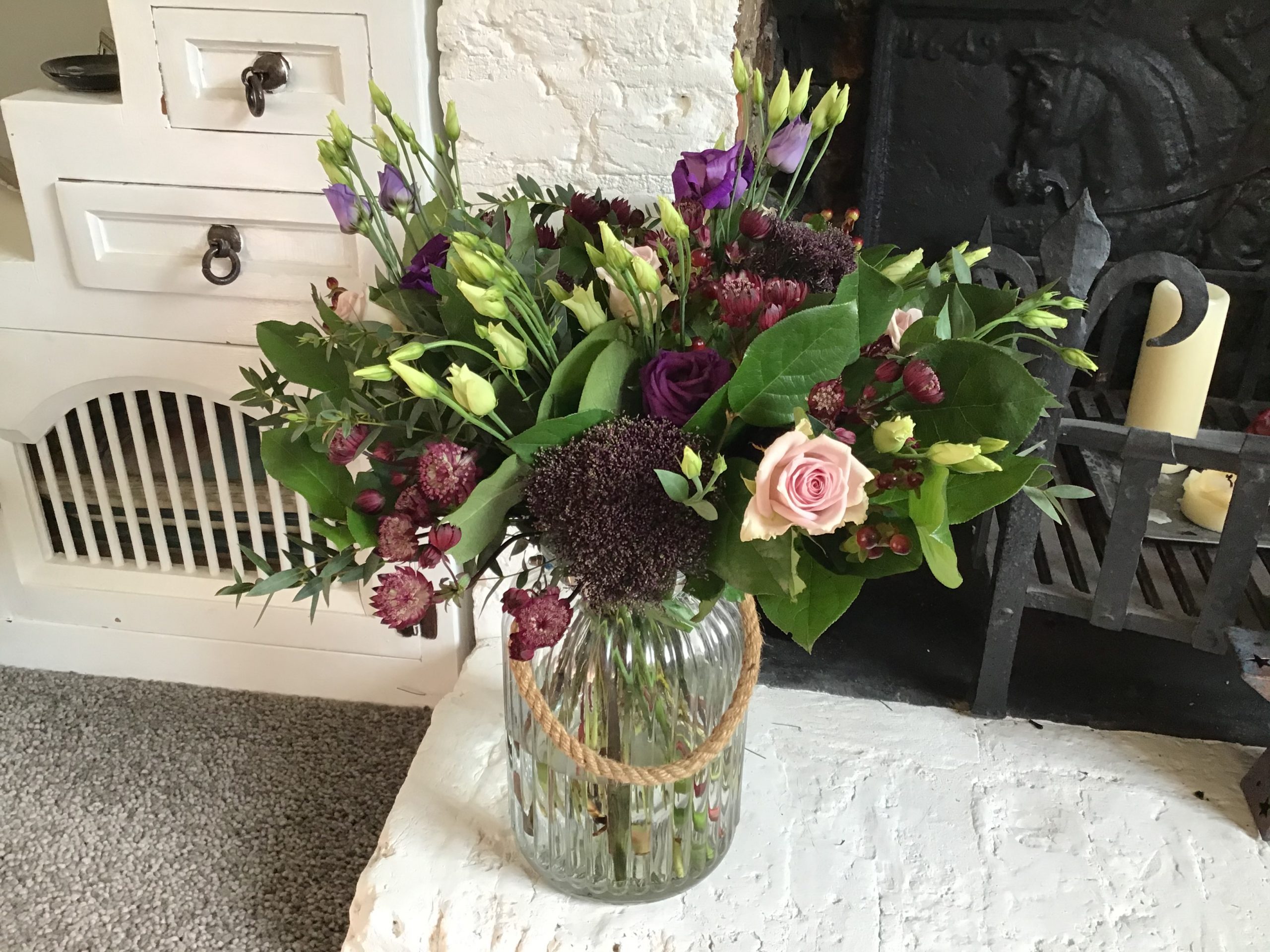 Speaking of my son and Snowdonia, he and his girlfriend have gone away for a few days to the Snowdonia region. It looks beautiful, but I’m guessing they won’t see much of the outdoors once Storm Dennis hits. I hope you’re all okay after Ciara? Our only damage was to my metallic eagle sculpture. It blew over in the high winds and one of its wings came off. I hope that’s not symbolic for Crystal Palace for the remainder of the season!! 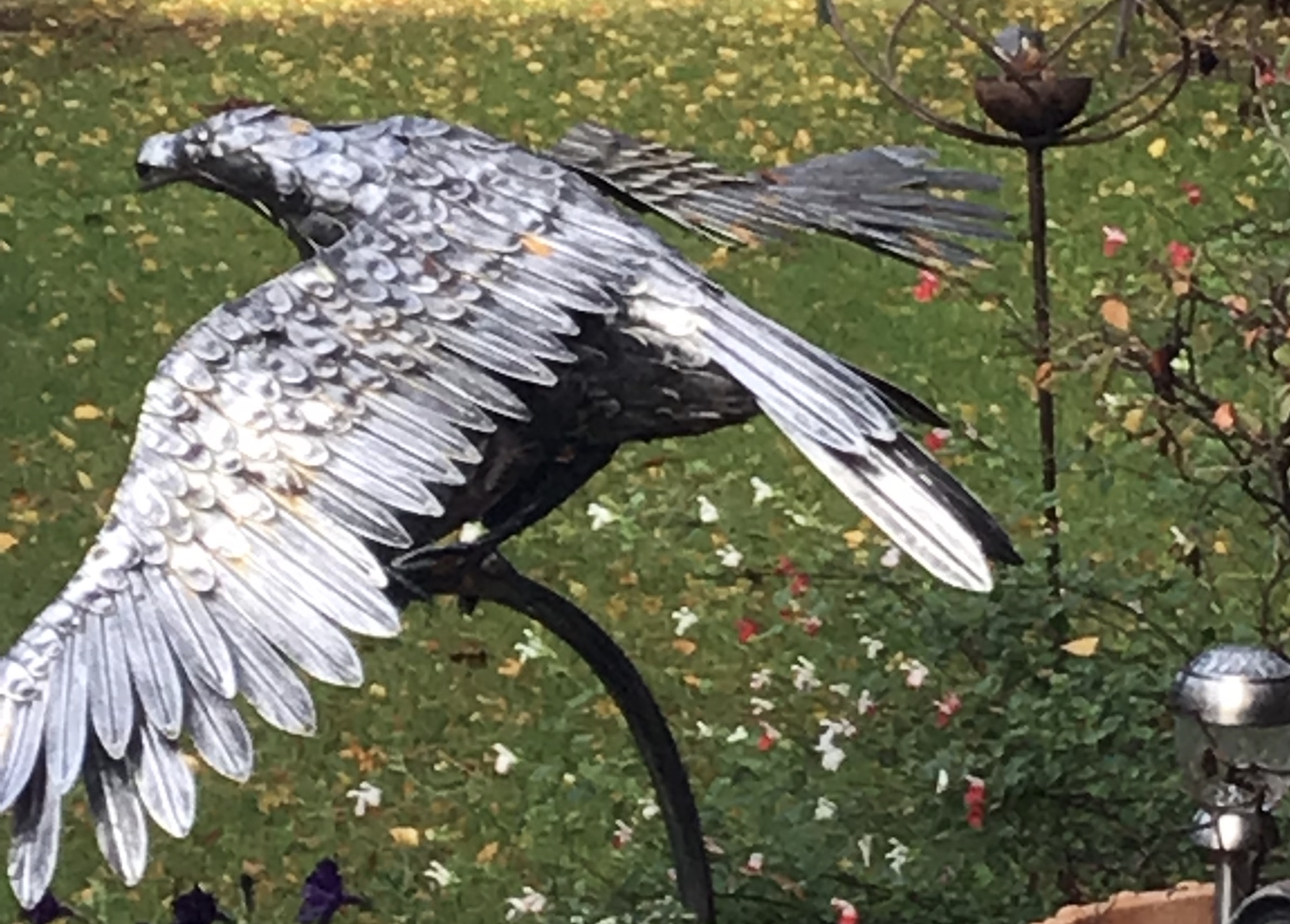 So, they are away this weekend, but last weekend Katie suggested coming over to cook for me as Chris was working on Friday evening. Together they made this delicious recipe, Dan mostly with Katie as his sous chef chopping vegetables and the like, but on Saturday, Katie took centre stage. She did Butternut Squash soup for lunch, using a squash her mum had grown, and veggie Toad in the Hole for dinner. This ‘not being able to stand and cook’ lark isn’t so bad after all!! 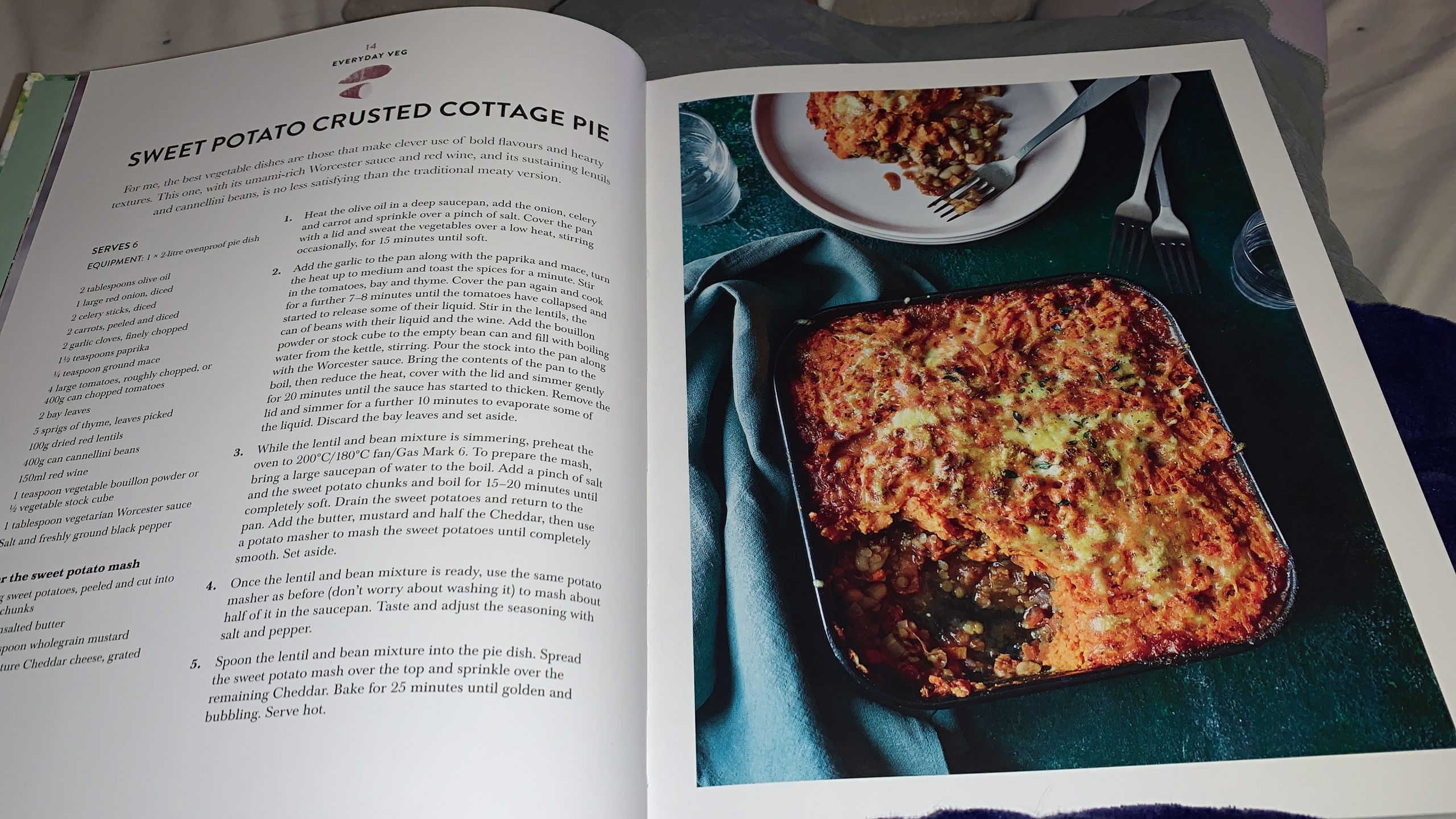 So while Dan and Katie were with us, Sophie and her boyfriend, Reece, were in New York. It was her first ever visit and their birthday gift to each other – they are both January birthdays. Her brother had given her a list of ‘must dos’ and she added a few extra things that friends had recommended. It’s amazing how much you can pack into two and a half days in New York – I know we did on both of our recent trips. I had offered to treat them to a Broadway show, so they booked Moulin Rouge… apparently it was a very good choice if you’re planning a New York trip while it’s on.

While Sophie and Reece were in the air on their way home, I was at the hospital having my cast removed and my stitches taken out. The good news is that the operation appears to have been a success and the wounds are healing brilliantly – the bad news is that the ‘Air’ boot is not as light as it sounds! It’s a lot heavier than the cast and at the moment I’m having to sleep in it so it’s pretty uncomfortable. At least I can take it off for showering and some light exercises to stretch my calf muscle. The amount of shrinkage in my left calf is quite alarming after only two weeks in a cast, but once my physio starts properly next week we should be able to build it back up again – I’m counting the days until I’ll be allowed back on my Aeropilates machine.

I have been doing exactly as instructed in my recovery, but I did have one minor hiccup on Tuesday. Because the painkillers make me fuzzy, I decided to cut some of them out… bad mistake when my leg wasn’t used to the aircast boot! I won’t be doing that again in a hurry – I was in agony for a couple of hours. Still, that apart, all good on the recovery front and I’m really looking forward to Monday when not only am I allowed a soak in the bath (assuming I can negotiate the stairs), I’m also allowed to sleep without the boot. That will feel like proper progress. 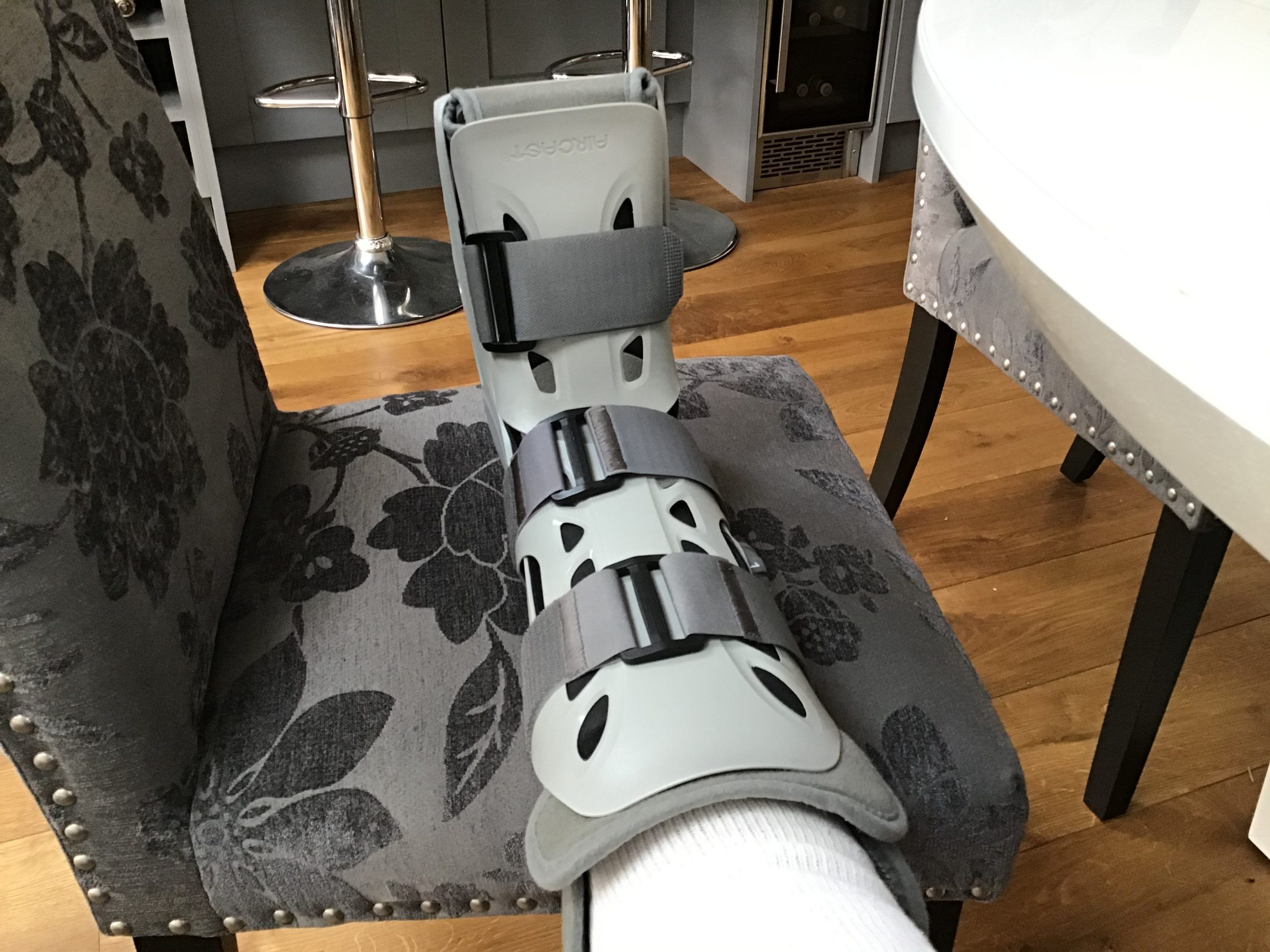 As I haven’t been able to get upstairs to my beauty cupboard, I’ve been relying on the products in my travel bag that I took into hospital. I might be standing on one leg, but I don’t compromise on my facial routine. You’ll notice L’Occitane Divine Cream and Divine Eyes, which I’ve been using as a replacement for the discontinued Decleor Serum Hydratenseur – my fave alternative so far. Liz Earle Instant Boost is a must of course and Decleor Systeme Corps for the body, plus plenty of Elemis. 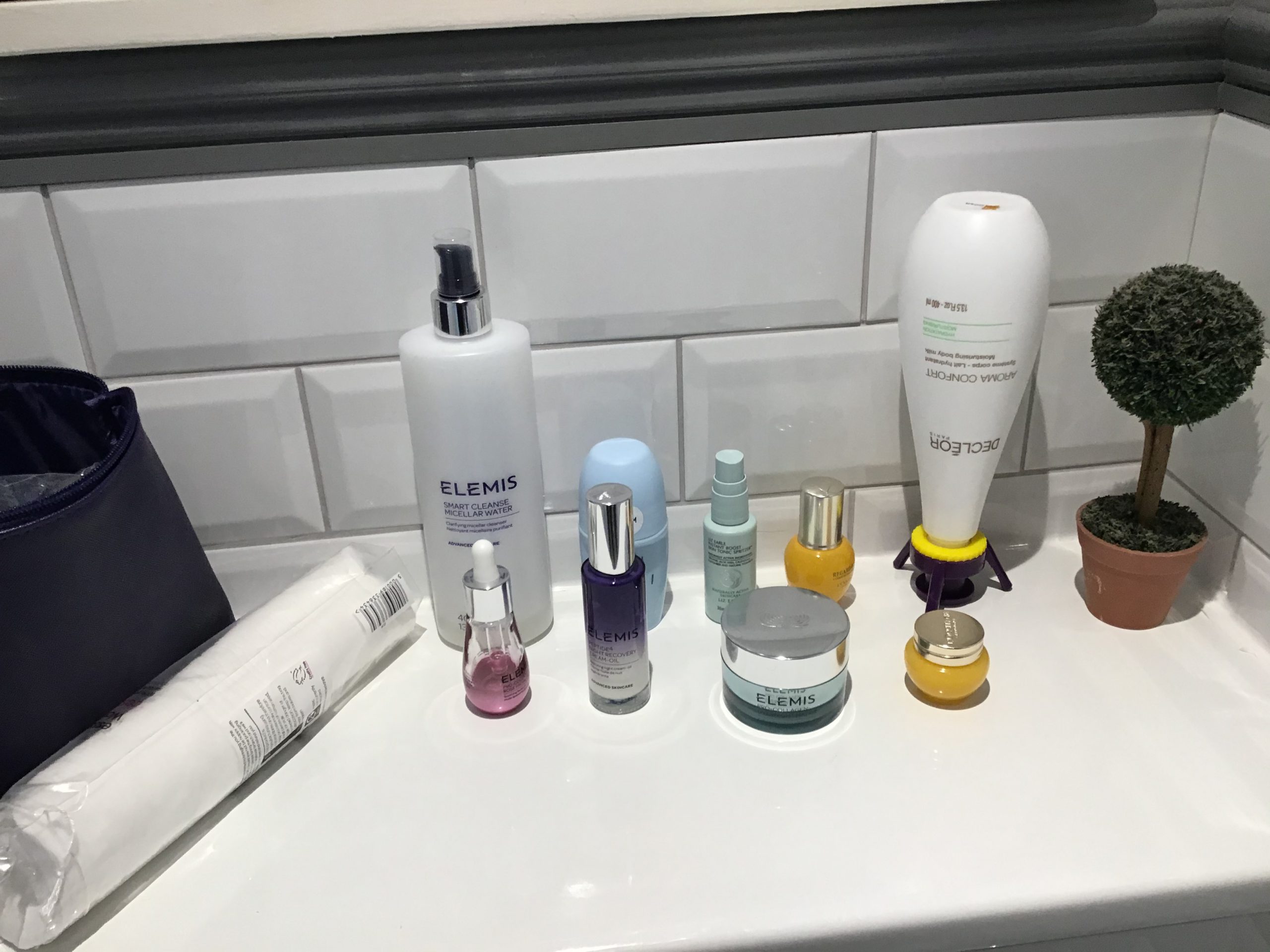 I’m gutted to be missing the Elemis Today’s Special Value, this Sunday as I’m a massive fan of the Peptide4 Night Recovery Cream Oil, which is part of the four-piece collection, and I look forward to trying the new Overnight Radiance Peel. It’s been on pre-order since Monday and there are already six five-star reviews, all raving about the overnight peel. I’m usually nervous about peel-type products because of my sensitive skin, but I have total trust and confidence in Elemis. 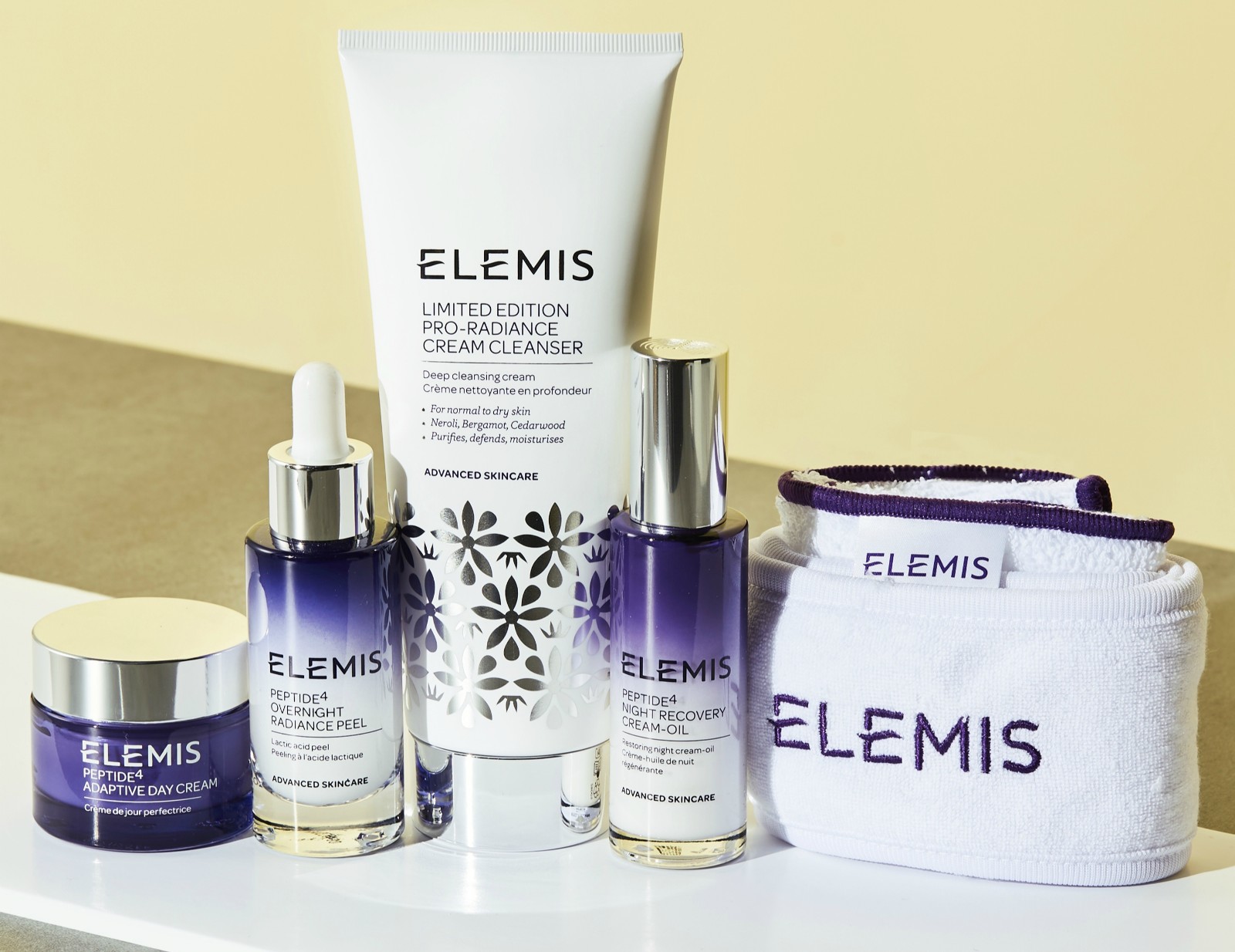 Another QVC product that has been invaluable while I’m less mobile is my Dyson Supersonic Hairdryer. I wanted clean, blow-dried hair for my hospital visit on Monday but I probably wouldn’t have bothered if I’d had to use a traditional heavy hairdryer. Chris set me up a chair to sit on near the big mirror in our hallway and my long, thick hair was dry in under ten minutes. 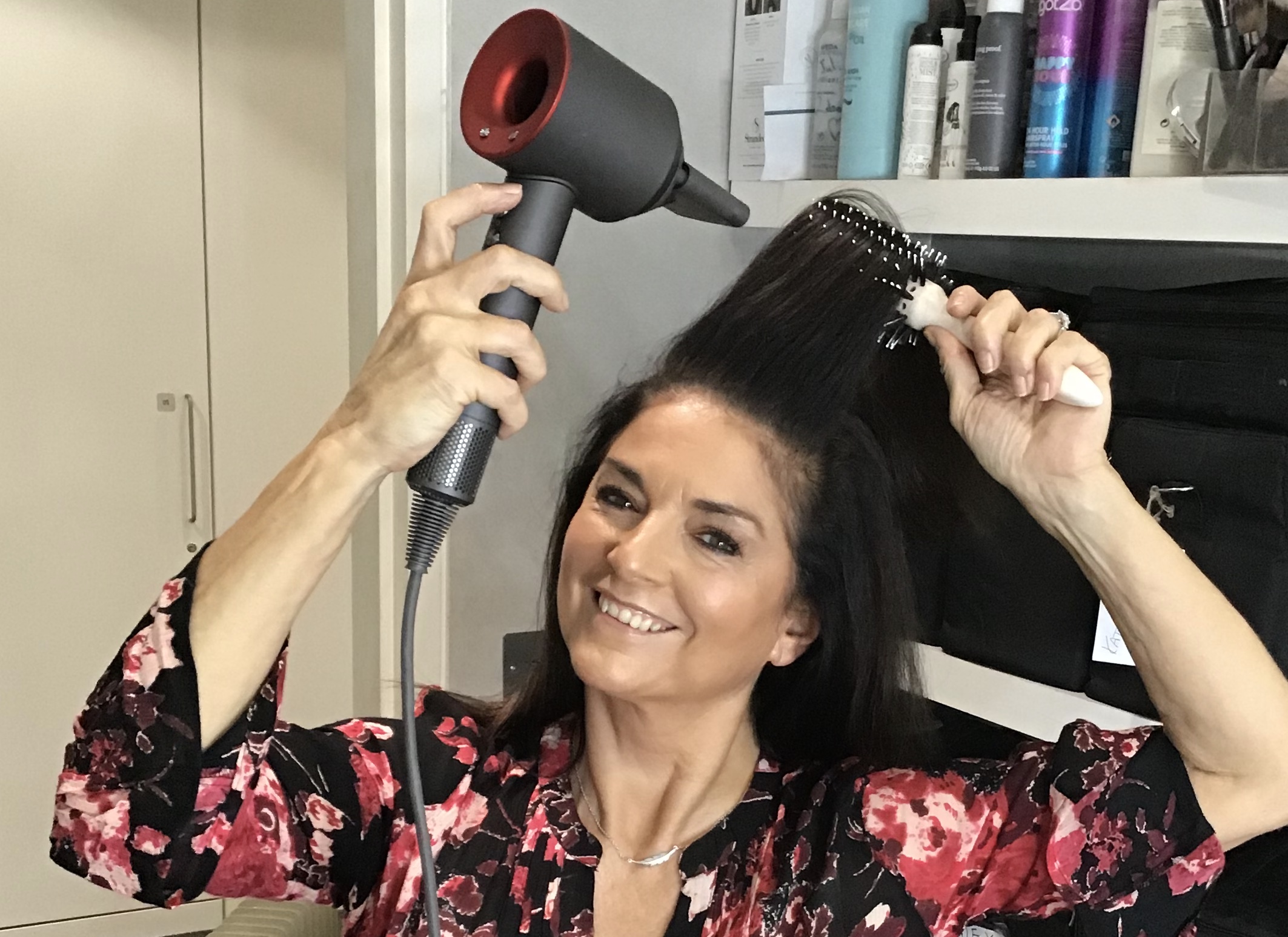 This photo was taken at work using the red limited edition one that was a Today’s Special Value before Christmas, but there is a ‘new kid’ on the block and it’s shocking pink!! It’s only going to be available from Dyson directly and us and they haven’t got it on their website yet… but we have! It’s just under £300 and has the wide-toothed comb, which so many of you have requested as part of the offer. I often get asked if it is worth the money and I always say YES! That is my honest opinion, but don’t take my word for it, try it out on the first easy pay instalment of £59.99 with no P&P – if you don’t love it within the 30 day money-back guarantee, you send it back for a refund and never make the other four payments – simples!, as a certain meerkat would say.

Not only am I missing the Elemis and the Ruth Langsford Today’s Special Values this weekend, I’m also missing Butler & Wilson. Simon has a two hour show tomorrow night at 7 p.m. with Debbie Flint. She and I go back a very long way, over thirty years, so it was lovely to receive this card from her earlier in the week to cheer me up – thanks Debs! 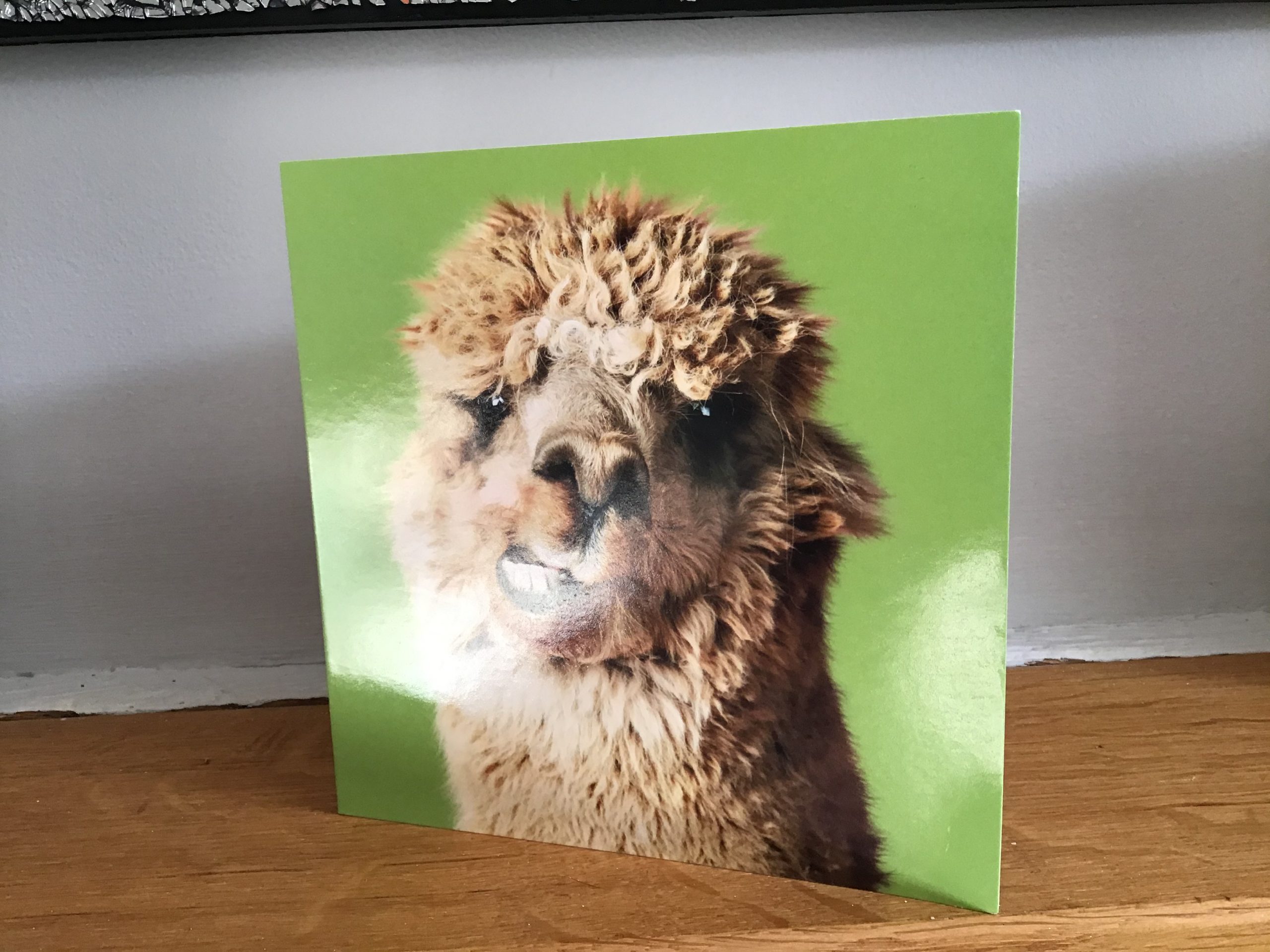 I’m going to finish there as it’s time for my calf stretches and my lunch, after which I have some editing to do on my latest book. It’s not due out until May but will be going on pre-order before the end of this month – did I mention I LOVE the title!

Have a great weekend and stay safe in Storm Dennis.