It says blue on the tin 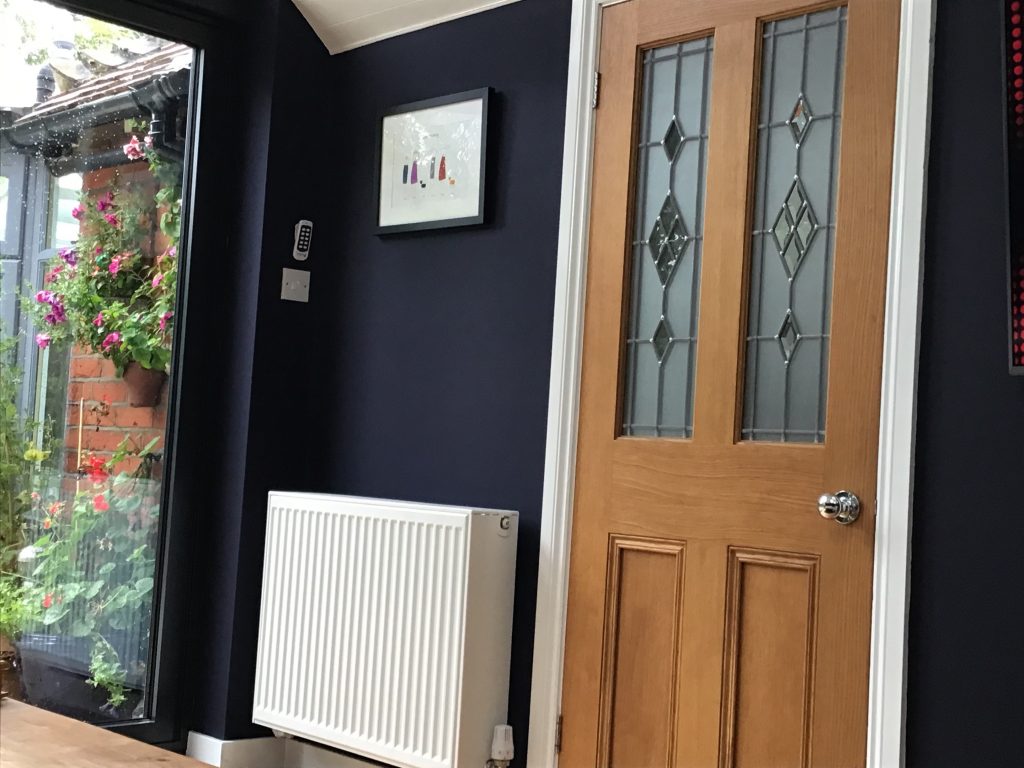 Those of you who watch QVC regularly will know that I am a bit of a purple fan, so when we were choosing a new colour for the walls in our family room, I was leaning towards purple, but my husband Chris was not so sure. The compromise is that this shade is called Scotch Blue, so it must be blue… right? More on our painting antics later!

Well, it’s been another couple of weeks of medical appointments for me, starting with my eighteen-month check-up after my ankle surgery in January 2020. The good news is that the realignment has worked well, and the muscle strength is much improved, but I have been experiencing some bouts of acute pain recently. My consultant said it is caused by bone scarring from the extensive surgery, so he arranged for me to have steroid and hyaluronic acid injections. I went for them on Wednesday and although not as painful as the botox injections deep into my calf pre-surgery, they were not very pleasant. A big thank you to nurse Nancy for allowing me to squeeze her hand (suitably protected in surgical gloves, of course) as Chris was not allowed into the appointment with me. Apparently, it will feel worse for a few days before I start to feel the benefit… what’s the saying? ‘No gain without pain’ or some such thing.

Steroid injections I’ve heard of before, but I was quite surprised about the hyaluronic acid. The only time I’ve come across that is in connection with skincare, which leads me nicely into tomorrow’s Today’s Special Value from Perricone, launching on air at 9pm tonight. It’s a five-piece collection comprising of 177ml Citrus Brightening Cleanser, 30ml Cold Plasma Plus serum, 59ml Photo Brightening Moisturiser, 59ml Face Finishing & Firming Tinted Moisturiser and the product I’m most excited by, the hypoallergenic CBD sensitive skin therapy Soothing & Hydrating Eye Cream. I have to be so careful with the skin around my eyes, but I have been fine with this after patch testing for 48 hours. Looking at the reviews on our website, the tinted moisturiser seems to be a customer favourite – ten reviews and nine of them are five-star. One of the best things about buying your beauty from QVC is the current 60-day moneyback guarantee… the other is when we have special price offers like this Today’s Special Value. I’ll be on with Karra Beck during the 5pm show tomorrow, assuming we still have stock.

I’ll also be presenting the second of the Diamonique Festival shows. The first two-hour show is this afternoon with Debbie Flint and Lee Clarke, and then Alison O’Reilly and I pick up the reins tomorrow from 2 – 4pm. We have some really pretty coloured Diamonique pieces and a very glitzy watch that I have my eye on! 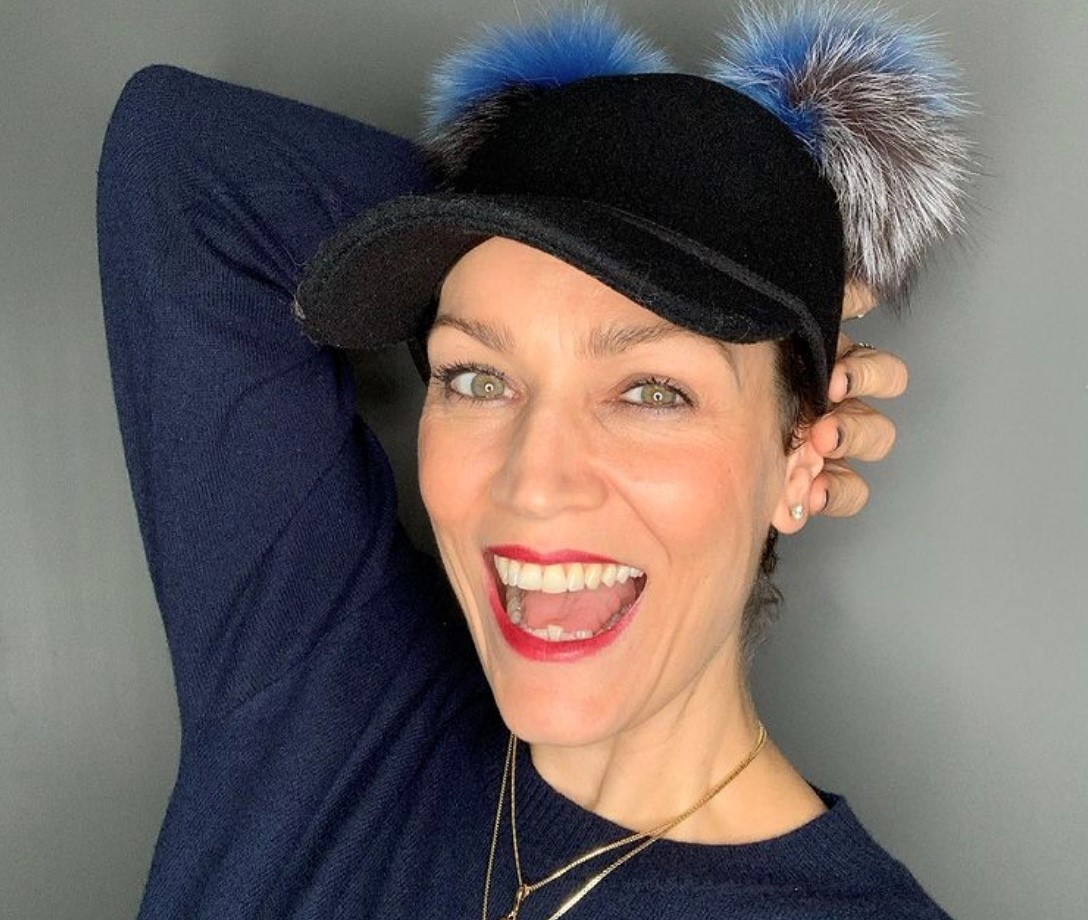 Of course, lovely Alison O’Reilly joined me for a chat on my Permission to Pry feature on my Instagram page, juliagroberts, a few weeks ago. Today, it is your chance to find out more about our ‘techie’ guest Lee Hobein, who had a very busy day yesterday with the Hisense TV Today’s Special Value. I wonder if any of you treated yourself to it? It will be great for watching the footie on when the season starts up again in a couple of weeks. I always ask my P2P guests if they are a dog or cat person and I’m pretty confident that Lee will be joining forces with Alison and myself as a cat fan. If you can’t watch live at 11am, I always post a video for you to catch up later.

Speaking of cats, Wilfie has now returned home. It was lovely having him here for his ‘holiday’ and I must say he was as good as gold. I’m rather looking forward to our next ‘catsitting’ duties, whenever they may be. Lovely as it was to have him here, I do confess it was easier to get on with painting the family room once Wilfie had gone home. I didn’t like shutting him out of the downstairs of our house, but it was preferable to risking purple paw prints across the wooden floors, tiles and carpets! 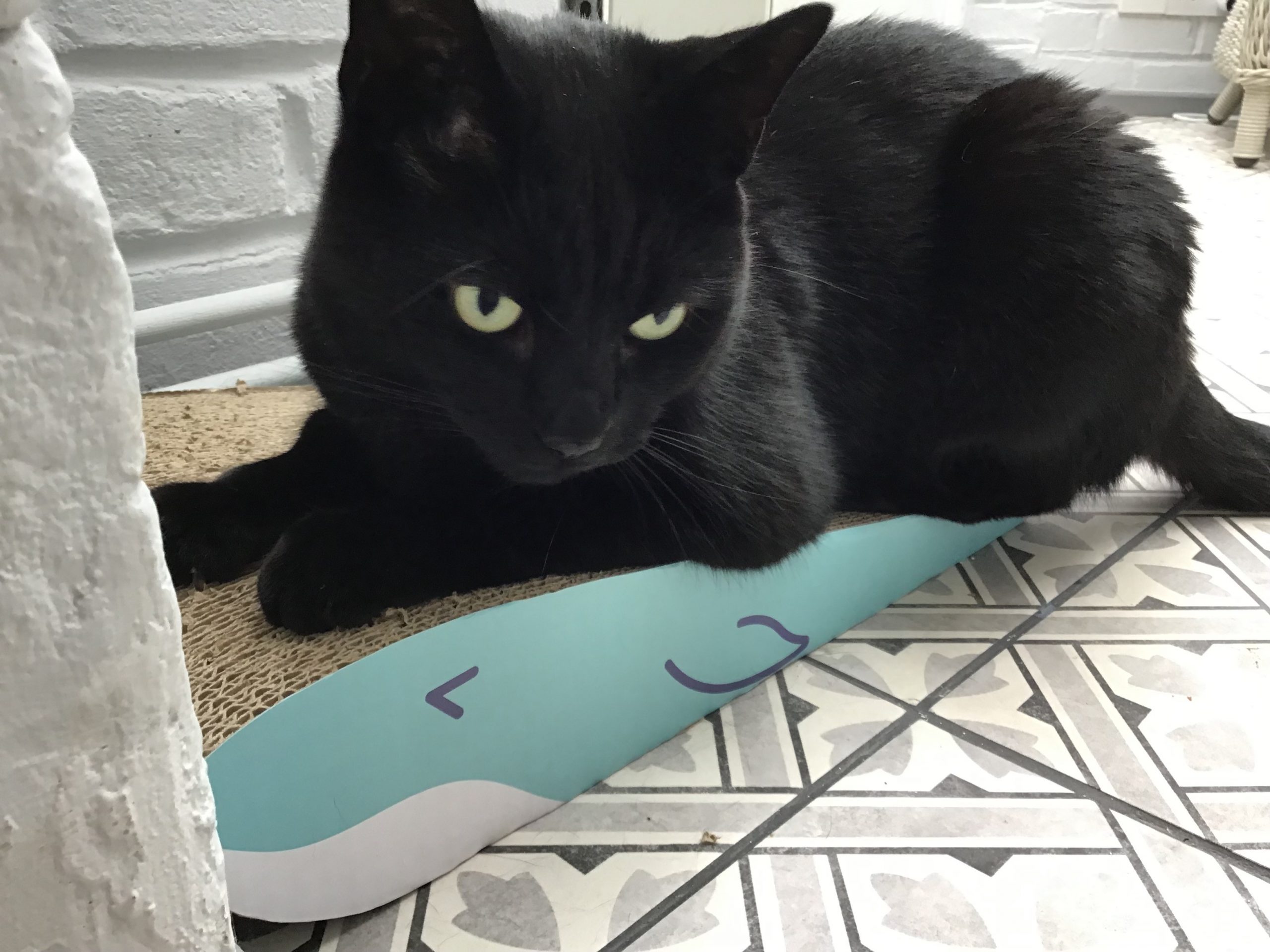 Yes! I did say purple, although as mentioned above, it is actually a shade by Farrow & Ball called Scotch Blue and in certain light it does look more navy, at least that’s what I keep telling Chris… it’s definitely dark purple! We were going on over a very pale grey, so to get the true colour we had to undercoat first, which we did on Sunday. Then on Monday we applied the first coat with the second one on Tuesday. 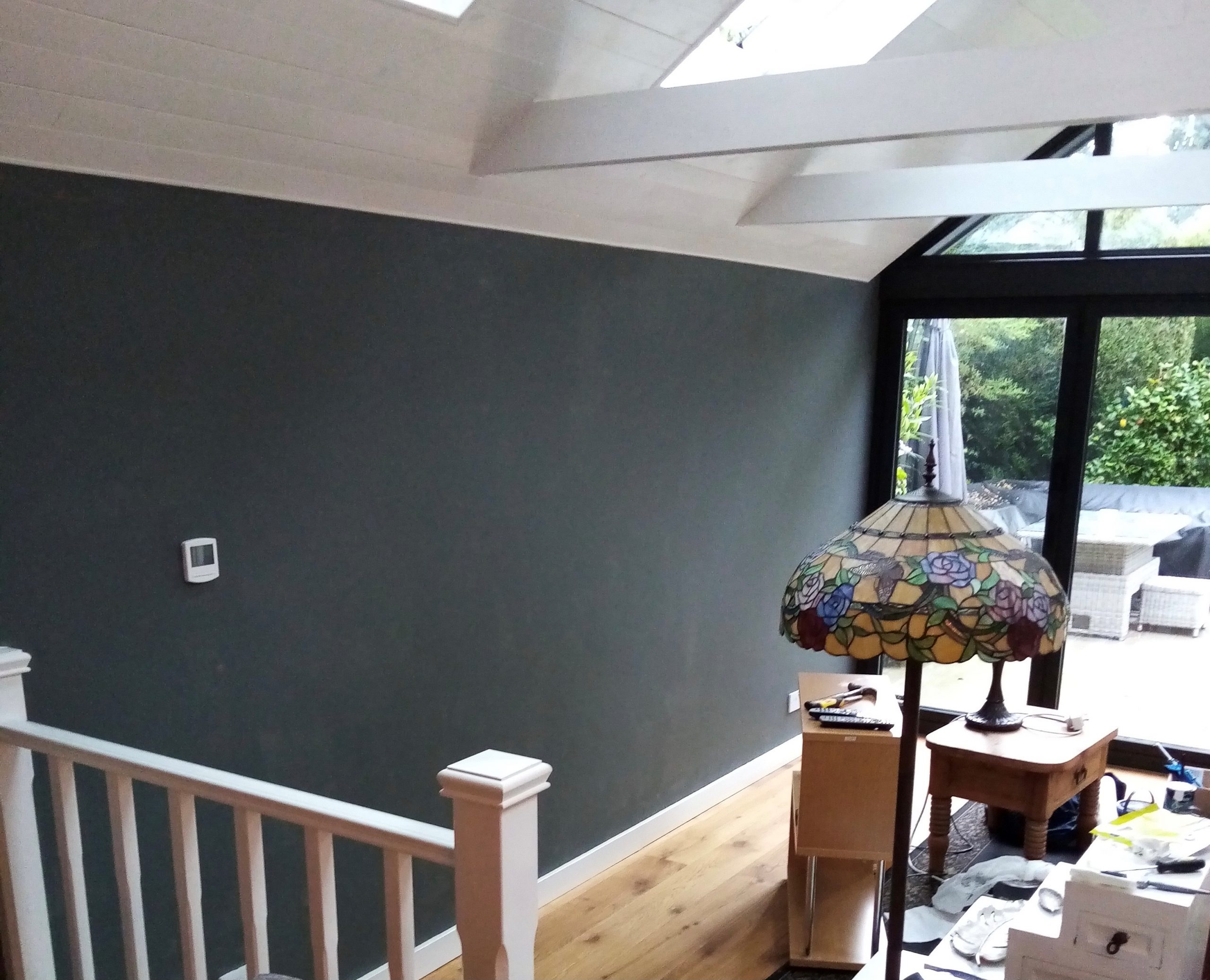 Chris does the high-up edges and ones that really ‘show’, while I do the skirting boards (mostly lying down so that I could see what I was doing) and all the rollering! I absolutely LOVE it, particularly as we have now moved our pale grey sofas in from the lounge in readiness for the arrival of the new ‘gold’ ones in September! 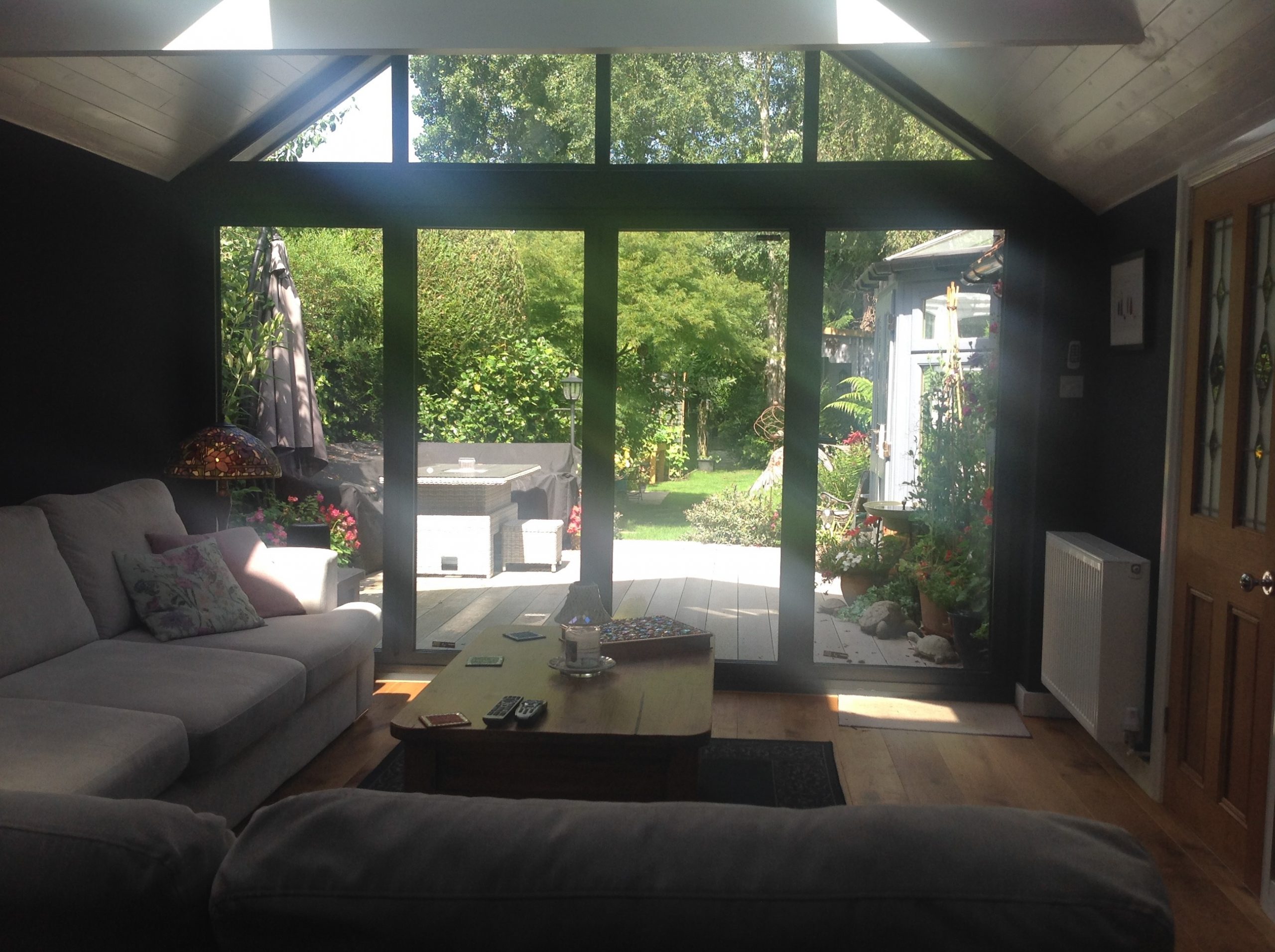 This is the view from one of the sofas looking down the garden. It’s funny how after only a couple of days it feels as though it has always been like this. It’s also a great vantage point from which to observe the birds flock around one of the bird feeders – clearly they were a bit ‘peckish’ when I filmed this.

Well, hopefully my ankle pain is sorted after my injections this week and my attention will re-focus (terrible pun) on my eye. I had an appointment on Monday and have another one next Wednesday,k when hopefully a decision will be reached on what needs to happen next to improve my vision. I’ll give an update on the blog I write on alternate weeks to this one on my juliarobertsauthor website, also on Fridays. Next week, I have a rather special guest on my Between the Lines feature – it’s none other than our very own Jackie Kabler. I haven’t managed to get her on P2P yet as requested by several people, but I’m working on it. In the meantime, there are some eye-opening answers to some of the questions, things you probably never knew about Ms Kabler! There will also be the chance to win a signed copy of her latest book, which releases in paperback on the same day as my next book, The Woman on the Beach is published. I can’t believe that is less than three weeks away, this year is positively flying by.

Well, that’s it from me for now. Enjoy your weekend – hopefully the weather will settle again, and we’ll get a bit more sunshine. If not, watch some QVC and maybe some of the footage from Tokyo of Team GB in action.