A bit broken… but winning! 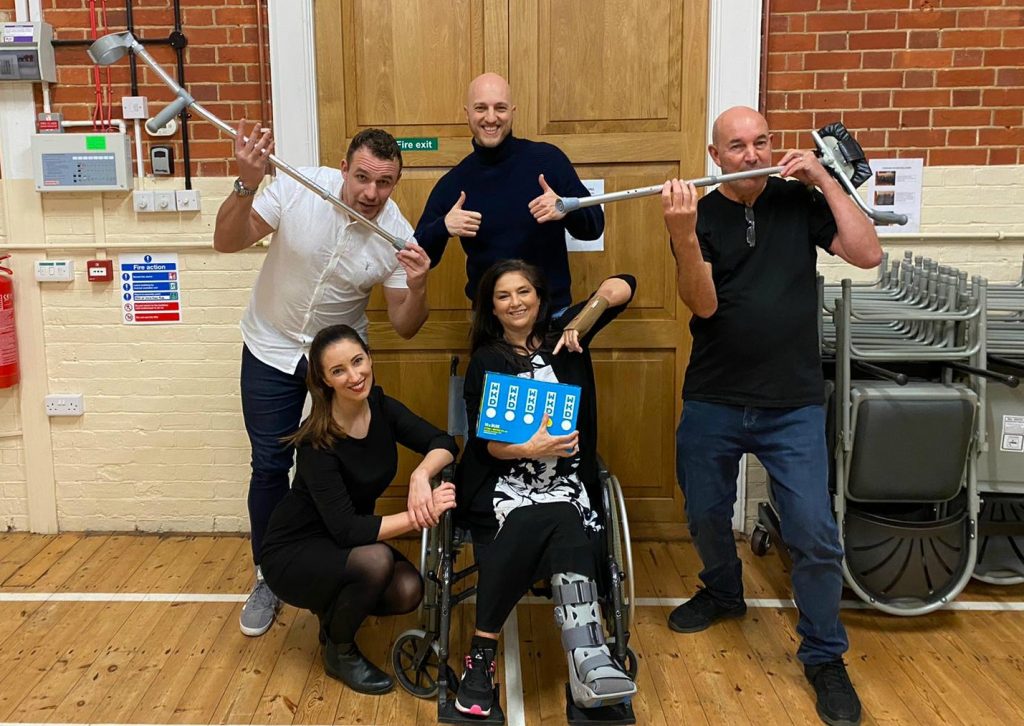 Firstly, can I just say a massive thank you to everyone who left lovely comments on last week’s blog. I’ve read them all and will eventually get around to answering you because your very kind words are exactly what has kept me feeling so positive throughout this unfamiliar period of feeling helpless!

It’s actually been quite a busy week for me with two trips into Chiswick to my physiotherapist, my first visit from a non-family member and the charity quiz last Saturday that I had promised our daughter Sophie we would attend.

To be honest, I get pretty tired by the early evening so I was tempted to go back on my word, which I’m sure she would have understood, but I wasn’t going to let a broken arm and ankle stop me. I tried to make a bit of an effort by choosing to wear one of my favourite dresses and putting a little bit of make-up on, but asking Chris to put heated rollers in my hair was just one step too far for him. In the end we managed it together, but I don’t think it’s an experience he is keen to repeat!

So off I went in my wheelchair with the crutches also with us, just in case I needed the loo. Our team was called ‘Quiztal Palace’ and we followed on from the success of Crystal Palace who had won earlier in the day by coming first in the quiz. There was also a separate section where you had to give a lip-sync rendition of a song. We chose ‘My Heart Will Go On’ from Titanic and thanks to some very clever choreography from Sophie, we made use of my crutches as giant flutes and my wheelchair. The quiz we won fair and square, but I have a feeling there may have been something of a sympathy vote as we won the lip sync too. I’m not going to lie, I was shattered by the time we got home, but oh so glad we made the effort and helped to raise some money.

Those of you who read my blog regularly will know that I’m a fan of inspirational message plaques and have lots of them in our downstairs loo. I decided it was time for a new one and this one seems particularly appropriate at the moment. 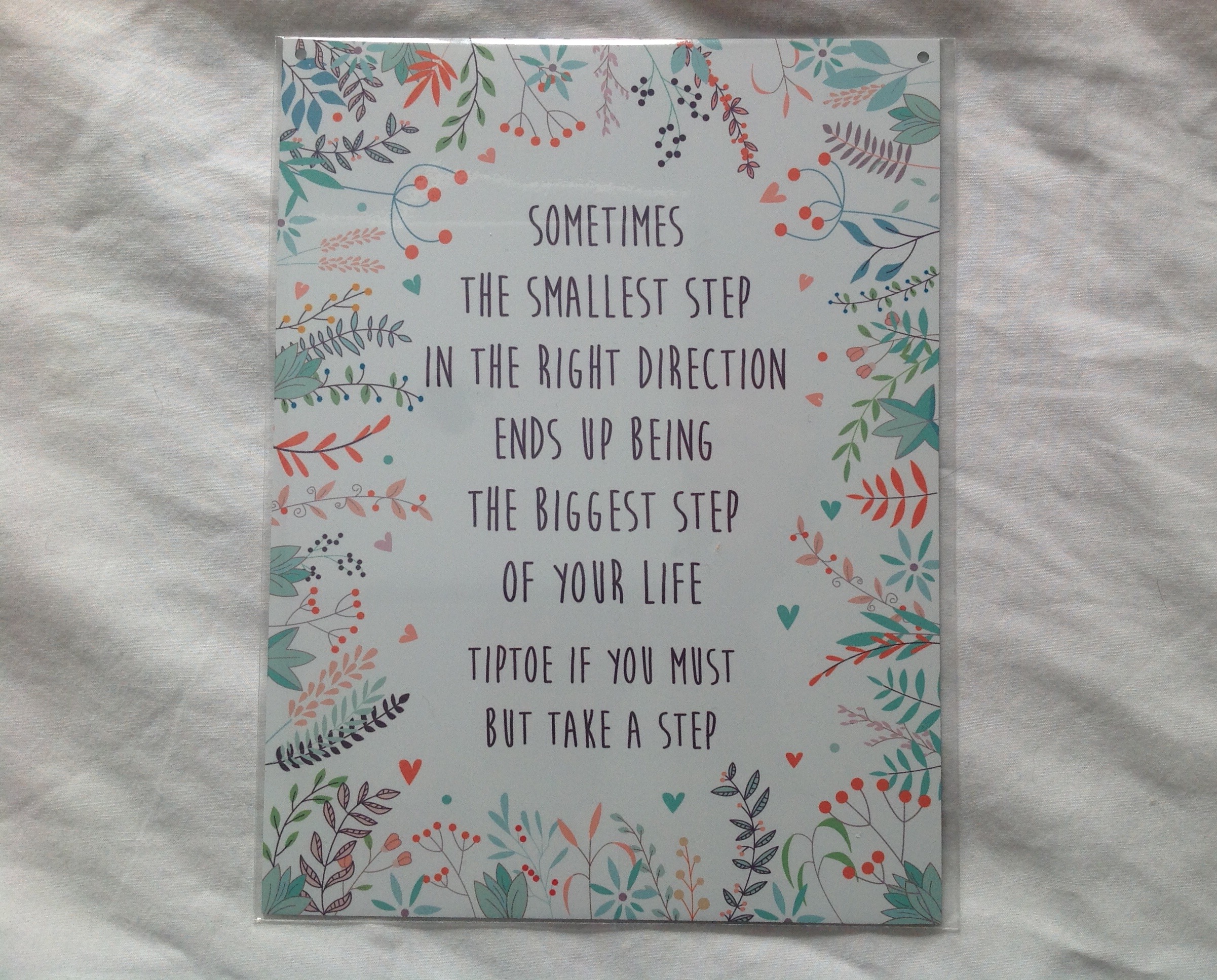 Obviously, I’m taking the meaning literally with regard to my ankle, but it is also true metaphorically. This time five years ago, I had never had a novel published, despite having wanted to write one since I was ten years old. My first novel, Life’s a Beach and Then, was published in June 2015 – I know some of you bought it from QVC and I thank you for that as I was able to make a sizeable donation to the blood cancer charity LLR, now known as Bloodwise. Today, less than five years later, my seventh novel, third in the DCI Rachel Hart series and entitled ‘Why She Died’, has gone on pre-order, before publication in May. As promised, here is the cover. As with the others in the series, it is a crime thriller for those of you who like that sort of thing. 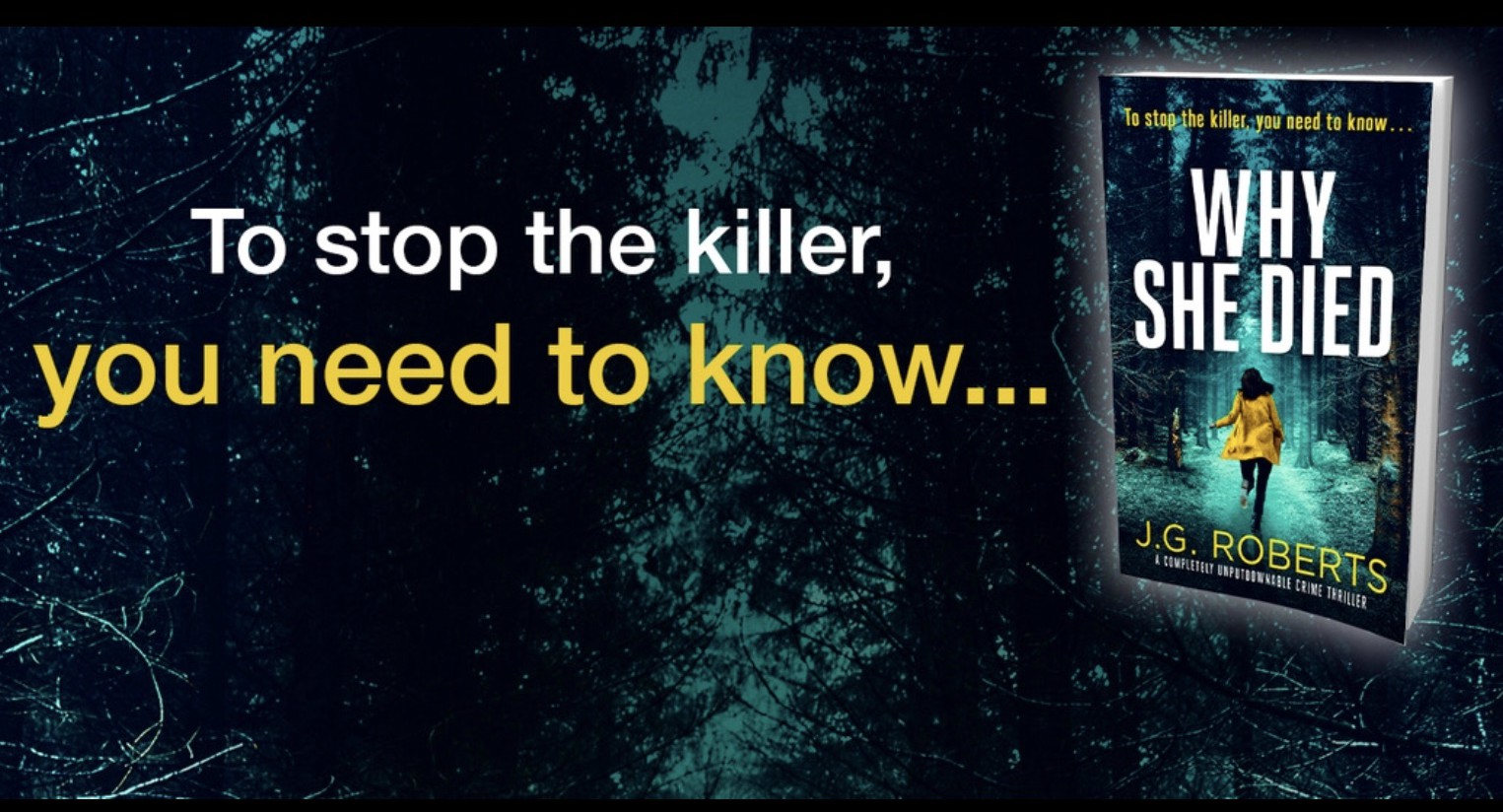 I have actually needed to do a bit of work on one of the editing stages, which has been so difficult with my arm, but thankfully QVC gave me this pillow to try out, which is a Big Deal next week. Not only has it been great for propping me up on the bed when I’m resting my ankle during the day, it’s also been a great base to rest my computer on for my one-handed typing… in fact, that is exactly what I’m doing now! It’s really clever actually, as it’s customisable for lots of different scenarios, including sitting on it in the car or an office chair. Keep a look out for the Big Deal presentations next week. 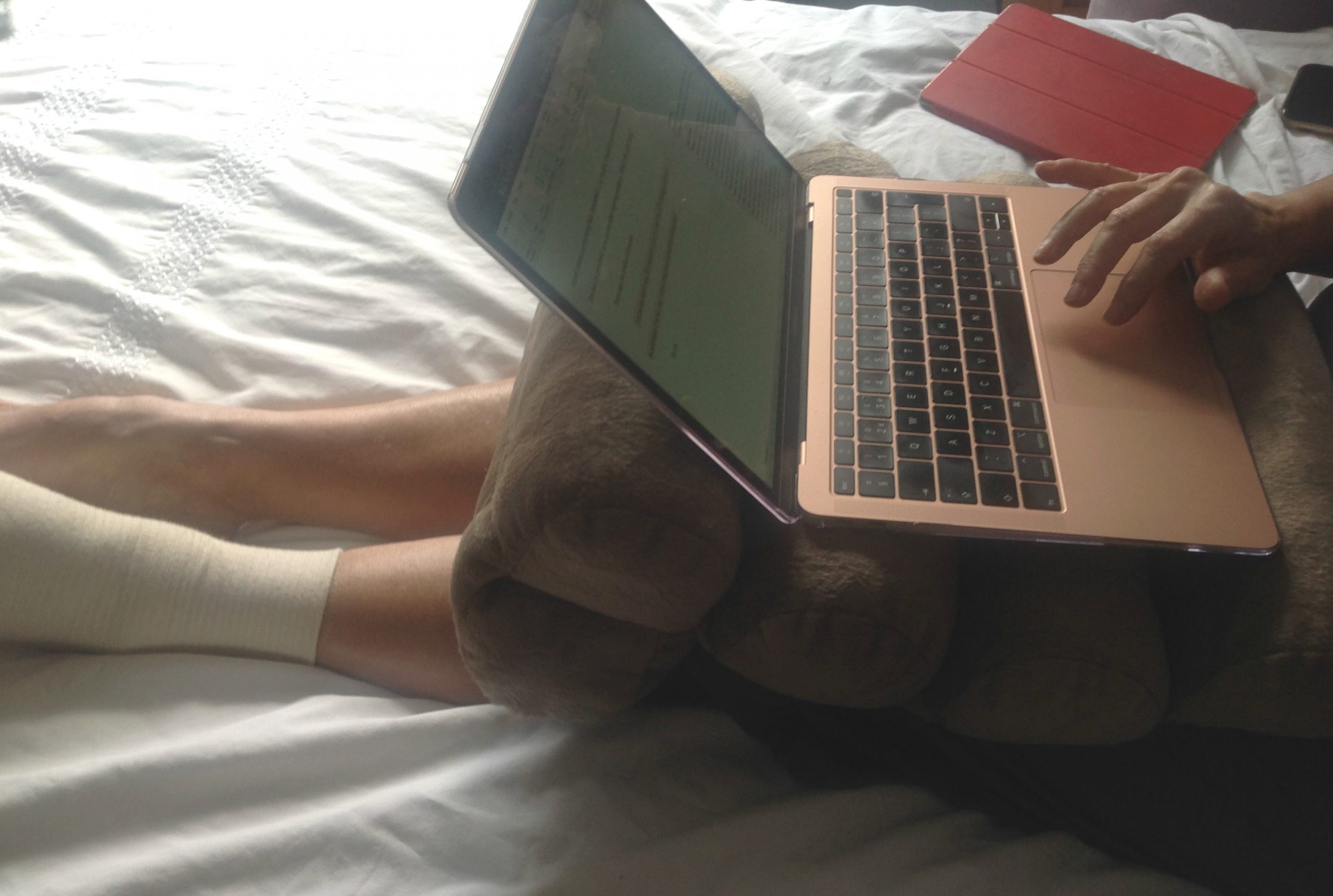 As I mentioned above, I’ve had a couple more physio sessions this week along with all the exercises she gives me to do at home. Monday was particularly challenging as she had me walking on a treadmill! I know what you are thinking, how can you walk on a treadmill if you are on crutches? Well, this is a special one. It’s called the Alter G and is widely used by athletes and footballers when they are recovering from injury – it was also used by our very own Jackie Kabler when she had hurt her back. It was a bit tricky to get into with a broken wrist but once in and zipped up, it is pumped up with air to support a percentage of your body weight – quite incredible really, when you consider I only had my operation four weeks ago. Chris did take a video, but I think I’ll be keeping it to myself!

However, I’m happy to share this video he shot yesterday morning – we had a light dusting of snow! Well, it’s better than all the rain and again my heart goes out to you if you’ve been caught up in any of the floods.

After the exertion of the treadmill on Monday, it was really nice to spend a more relaxed day on Tuesday, especially as I had a visit from my ‘bestie’ Denise. For those that don’t know, Denise and I have been pals since we did The Price is Right together back in 1983 and Chris and I once surprised her and her boyfriend Steve on their holiday in Dubai. They’re going away again in a couple of weeks, but there will be no surprise visit from me on my crutches so they can enjoy their holiday in peace.

It’s been lovely to receive get well cards and know that people are thinking of me and I had a couple more this week from the Liz Earle team and also from Caroline personally. I love the message on Caroline’s and I think I shall try and heed it in future: You can do anything but not everything! It looks like I’m going to miss their upcoming anniversary on-air, but I can do what you guys do and tune into the shows from home. 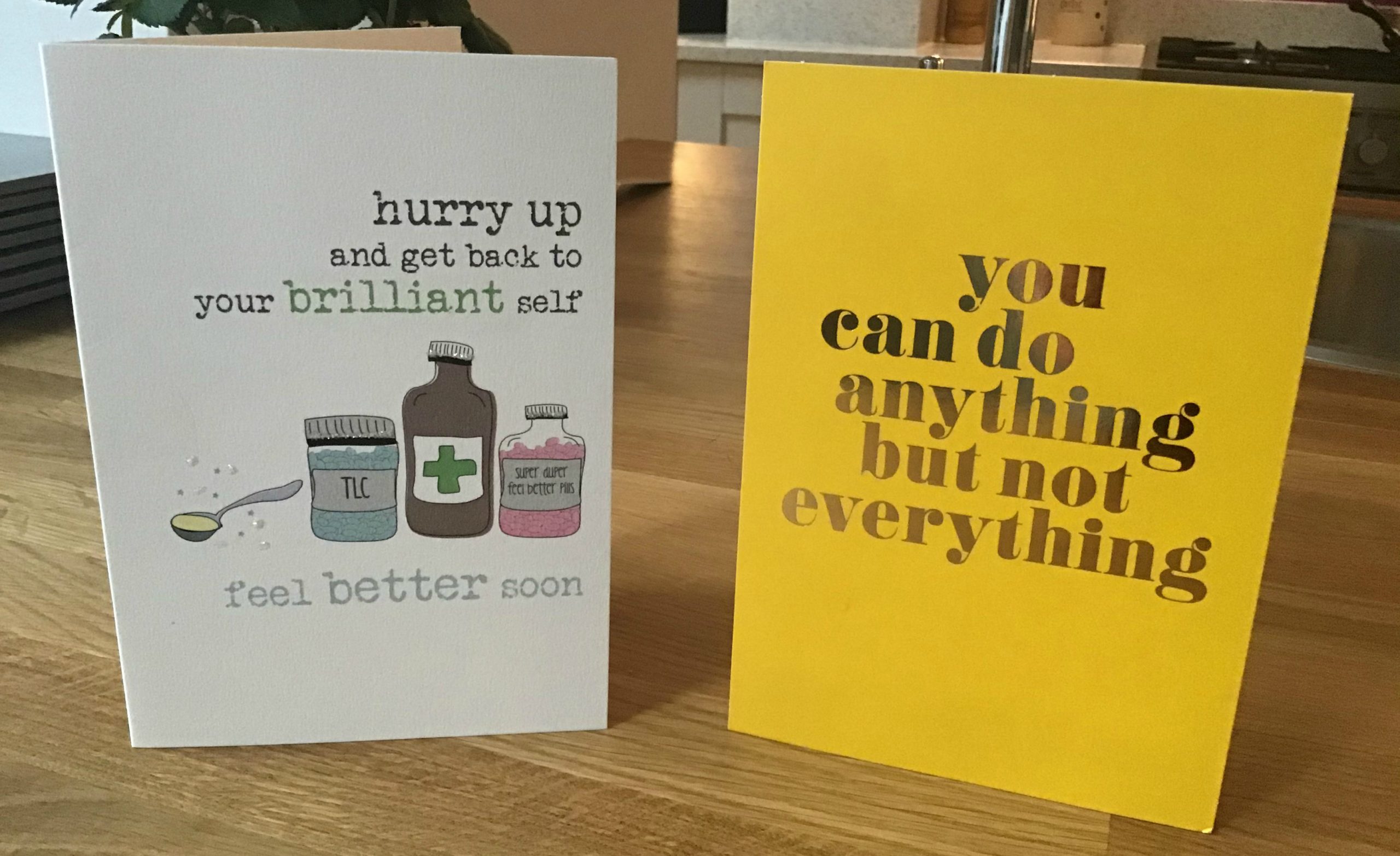 Speaking of our fabulous QVC beauty brands, we have a brilliant Molton Brown Today’s Special Value this coming Sunday, which is already on pre-order. I’m a lucky girl as I was given a sample of the Warm option to try, although I’ll probably have to buy the other option as it has Tobacco Absolute in it, which is my son’s ‘absolute’ favourite. 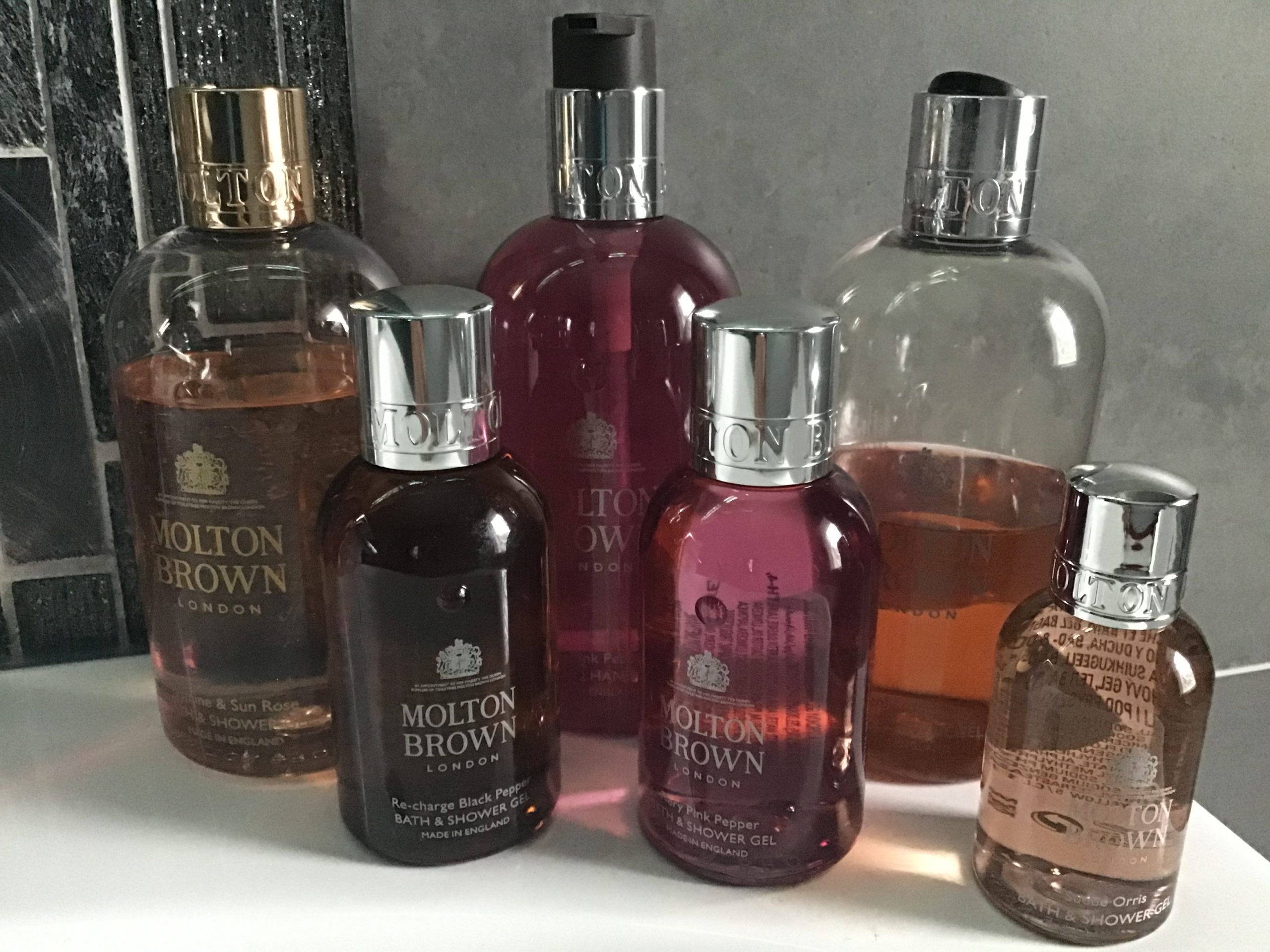 My sample is already well-used as you can see, particularly the Heavenly Gingerlily, a long-time favourite of mine, and it has the Re-charge Black Pepper, which is my husband Chris’s fave. Whichever option you go for, you will receive two 300ml Bath & Shower Gels, two 100ml Bath & Shower Gels, one 50ml Bath & Shower Gel and a 300ml Hand Wash. Check out both options on our website and also check out the price – £45 Today’s Special Value price when it would be £89 direct from Molton Brown AND it’s on four interest-free Easy Pay instalments. With Mother’s Day just around the corner, you could treat your mum to the larger sizes, which come gift-boxed, and keep the smaller sizes for yourself.

I’d better finish there as my one-handed typing is sooooooo slow! Enjoy the extra day tomorrow and Happy St David’s Day on Sunday to any Welsh readers – we’re planning Welsh rarebit and potato and leek soup for lunch.

Much love and thanks again for all your kind words,