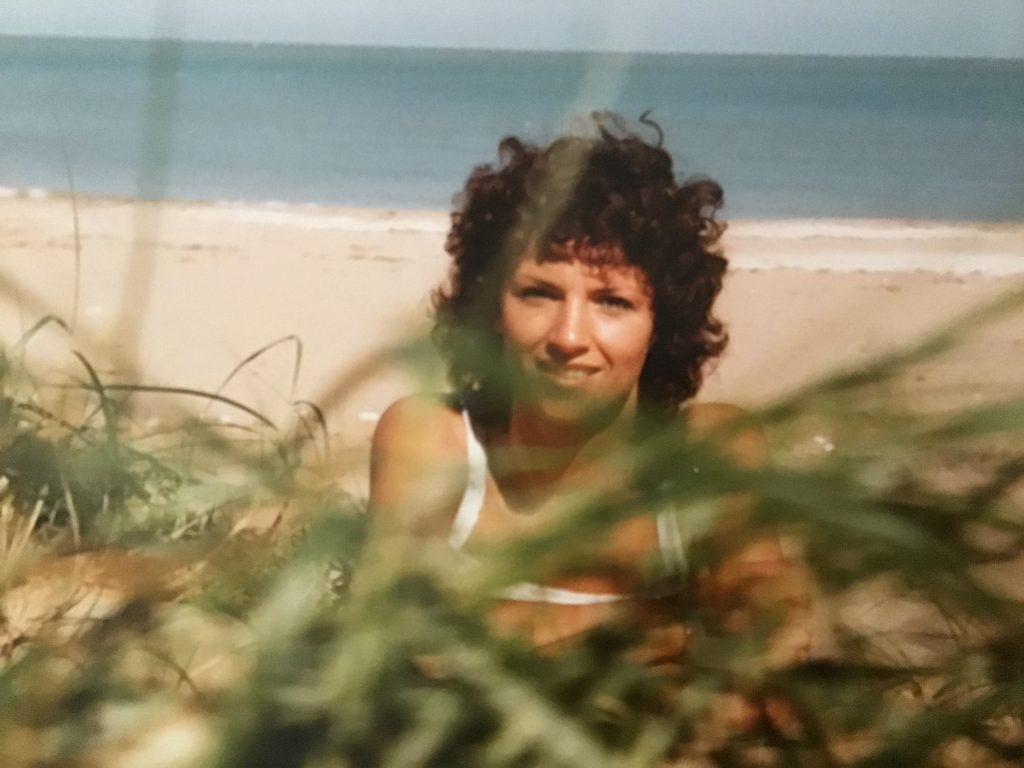 I know some people get a little irritated by the term ‘staycation’ when referring to holidaying in the UK rather than going abroad, but we truly did stay ‘at home’ for the three days of annual leave I took last week, although once the weather perked up, we did manage to get to the beach on a couple of occasions – more on that in a moment.

We’ve been busy doing some more ‘jobs around the house’ in readiness for our new lounge sofas which, although a little later than expected, are due to arrive on Monday. It will be minus the co-ordinating scatter cushions, but that’s another story! We decided it would be a good idea to repaint the lounge as it had started to look a bit ‘tired’, but we have kept it the same colour, which we both love, and which will complement the yellow of the sofas (fingers crossed). We managed to get that done in an afternoon, although towards the latter stages we were both flagging a bit. It was definitely worth it, as it looks much fresher now, and it also spurred us on to have a rearrangement of pictures on the walls. I’ll take some photos for my next blog once the sofas are in place. 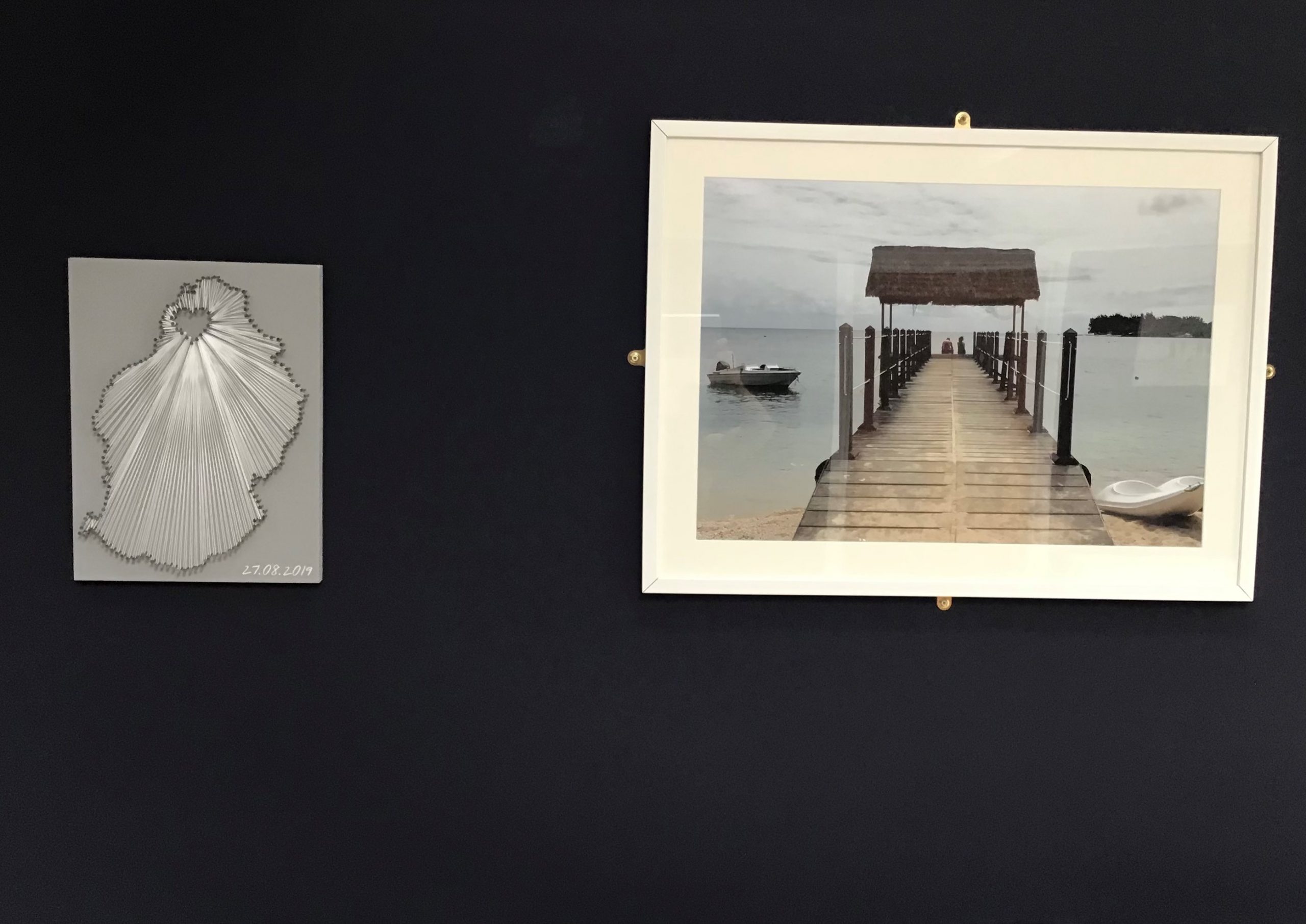 One of the pictures we moved was the gorgeous print Sophie had done for us as a wedding present, with Chris and I sat on the end of the jetty in Mauritius the day after our beach wedding. To one side of it is our latest anniversary present from Sophie and Reece. Those of you who read my blog regularly may remember that for our first wedding anniversary, which is paper, Sophie had the lyrics of the Shania Twayne song that she sang for us printed up in hearts and framed – I love it! Continuing the theme, the second anniversary is cotton, apparently, and she had this made for us. I must confess it took me a while to realise what it was, but once you know, it is clearly the outline of the island of Mauritius with the heart over the location of the hotel where we were married. What a thoughtful and ingenious gift, which has deservedly taken its place next to our wedding gift on the purple wall of the family room. 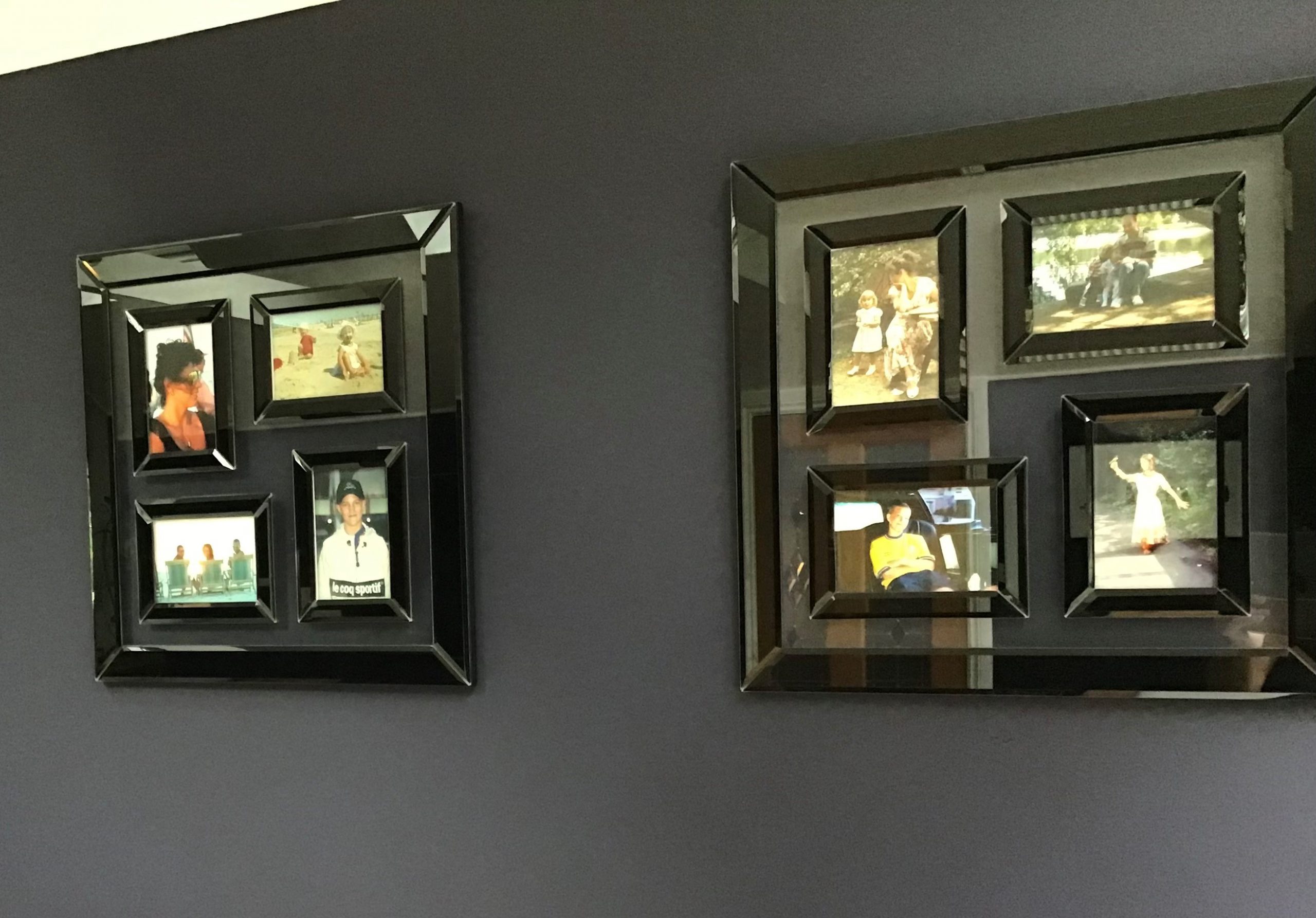 On the other side of the wedding gift, I have finally put photos in my Julien Macdonald mirrored frames, which I bought back in May and Chris has hung them. I think we’ll probably change the photos from time to time to always keep them interesting, but I’m happy with the selection for now.

I’ve been doing quite a bit of sorting out and organising in my time off… you know, the sort of stuff you keep leaving for another day, but it irritates you because you know it needs doing. The shredder has been very busy after attacking my filing cabinet and I also went through a lot of photos that haven’t yet made it into albums. I thought I’d share a couple with you. 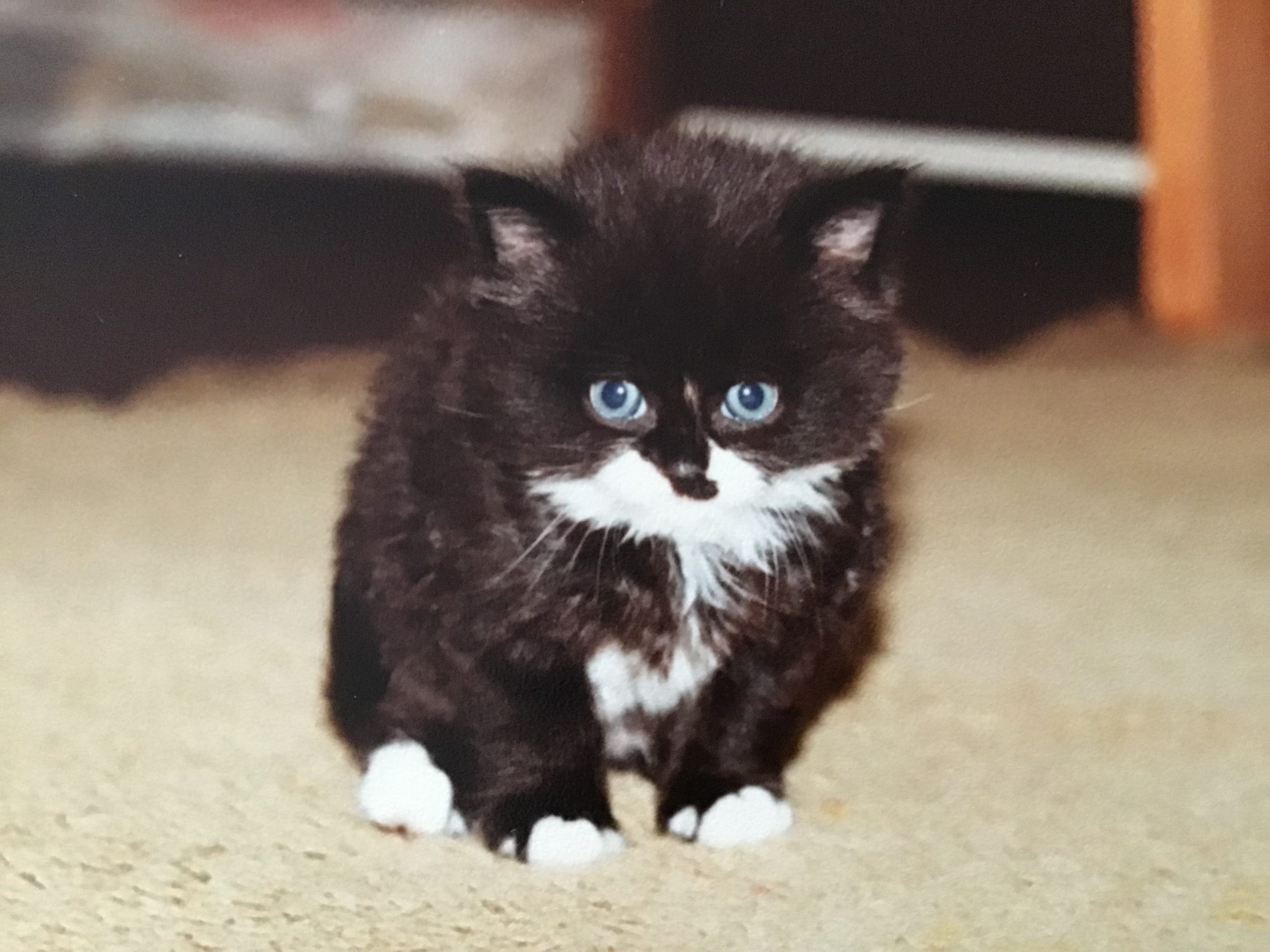 You may have heard me mention a tiny kitten called Charlie who we had to hand-rear after discovering him in the back of an old washing machine. These photos were actually taken when we’d had him for around three weeks. You can see how tiny he is by the size of his play mouse. 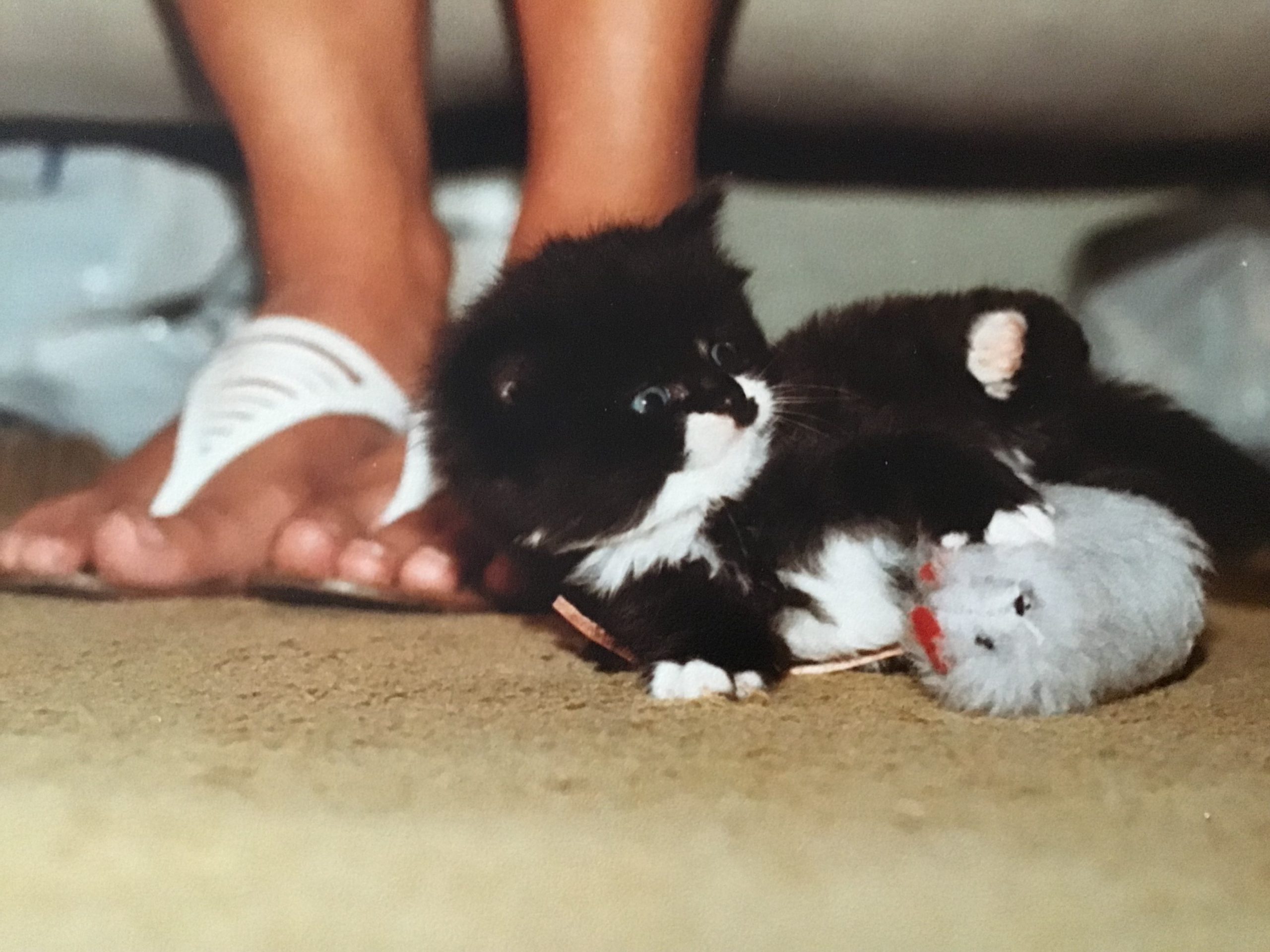 In the same envelope of photos, I found these photos of me circa 1980 taken on a beach near Margate where Chris was doing summer season with Jim Davidson. I made the dress by the way, and the Broderie Anglaise trimmed petticoat which I used to wear showing just beneath the hemline, which was the style at the time – really it was, you ask Glen Campbell. 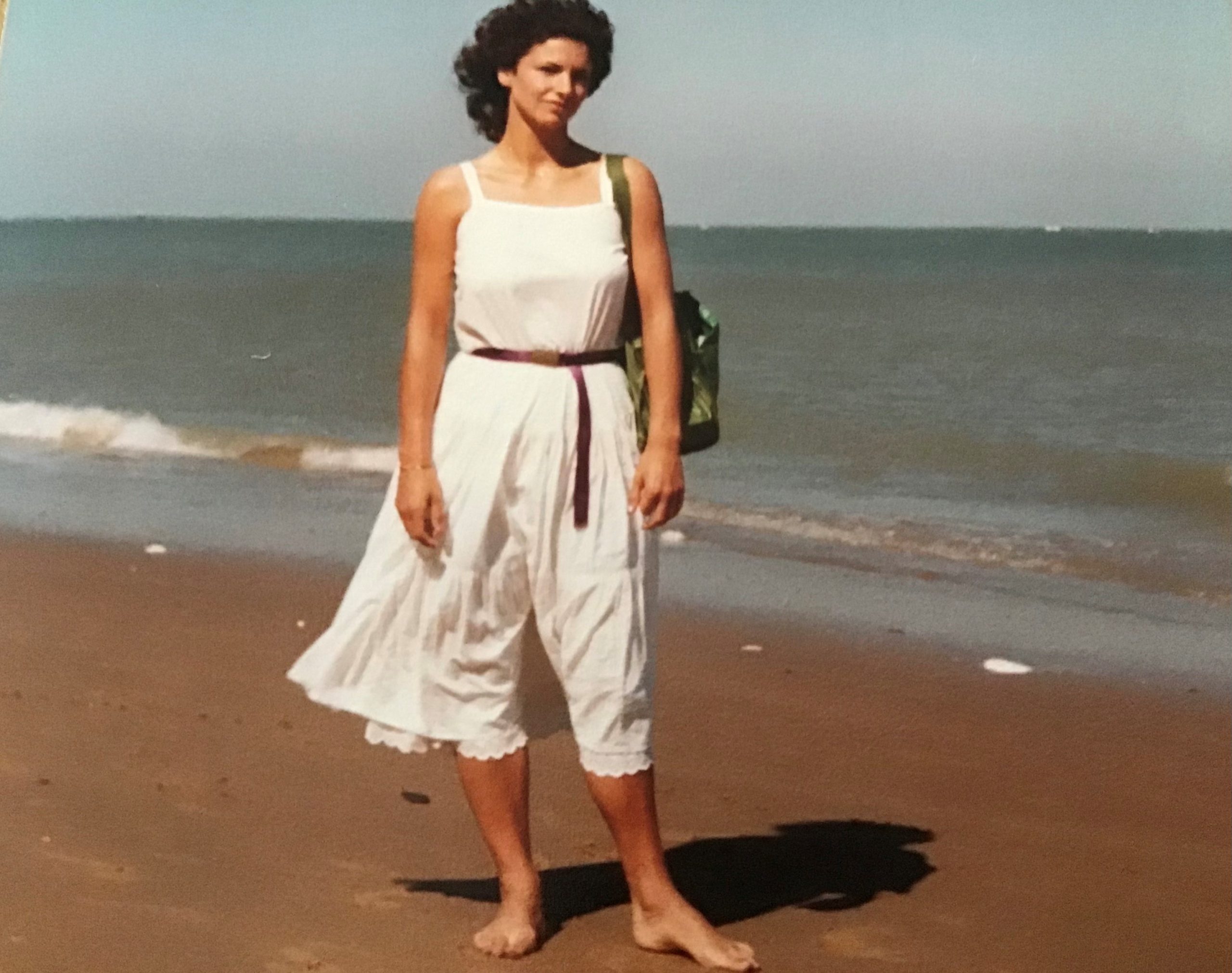 There’s no denying I’ve always been a bit of a beach ‘bum’ which makes the success of my latest book even more satisfying. I came across photos of me as ‘the woman on the beach’ in locations as far flung as Hong Kong and the Bahamas, as well as much closer to home like the ones above. My latest one below was taken at Goring by Sea, near Worthing on Tuesday of this week. 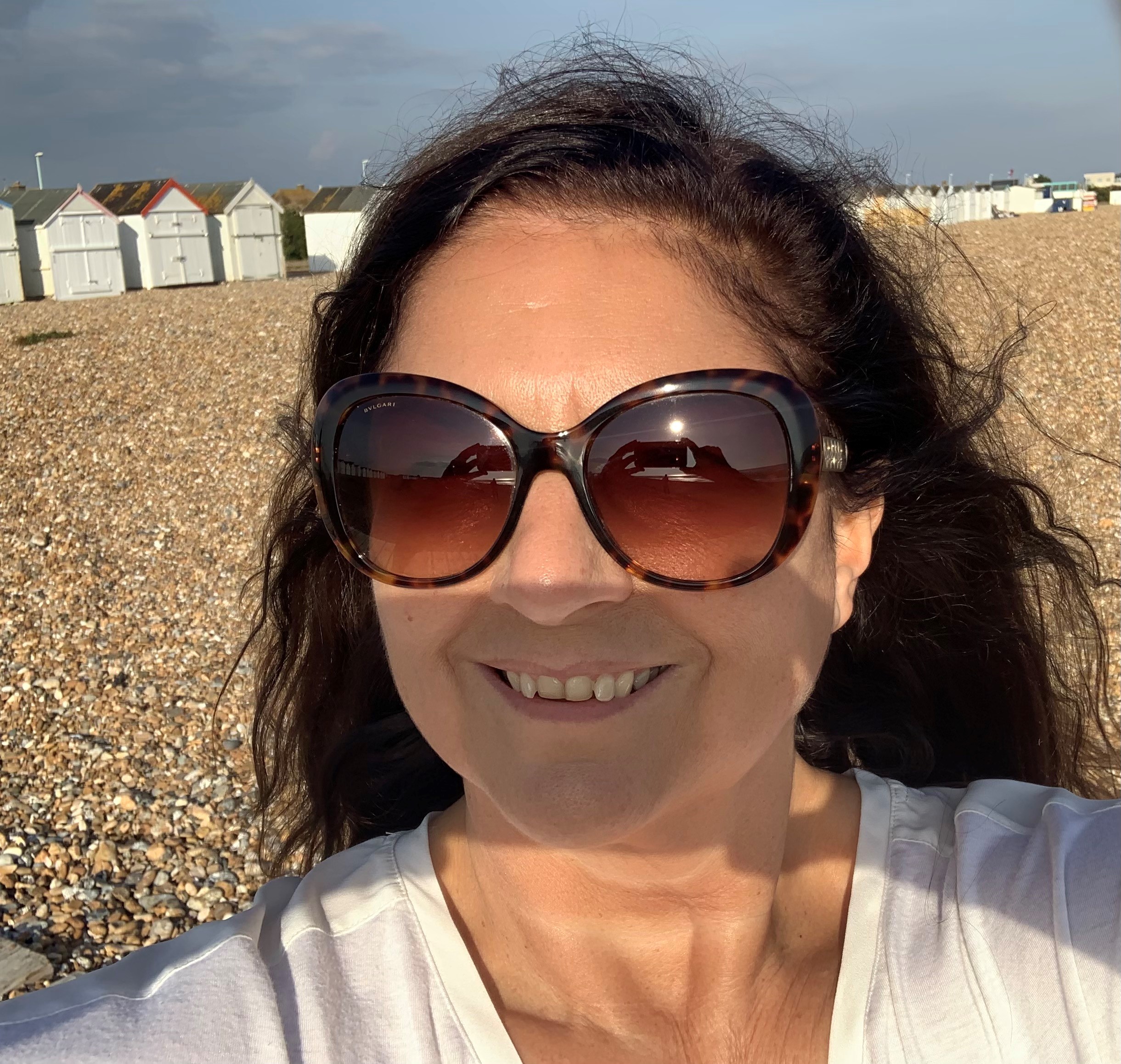 We returned there on Wednesday as it was another sunny day, but this time we had a guest. We were puppy-sitting Quin, Dan and Katie’s dog and he had a whale of a time digging in the sand and dragging Chris up and down the pebbly shoreline. We’re puppy-sitting again on Sunday, but we’ll be playing host to Sophie and Reece’s puppy, Baxter this time. I say ‘we’, but technically it will be Chris, as I’m working at QVC on Sunday. 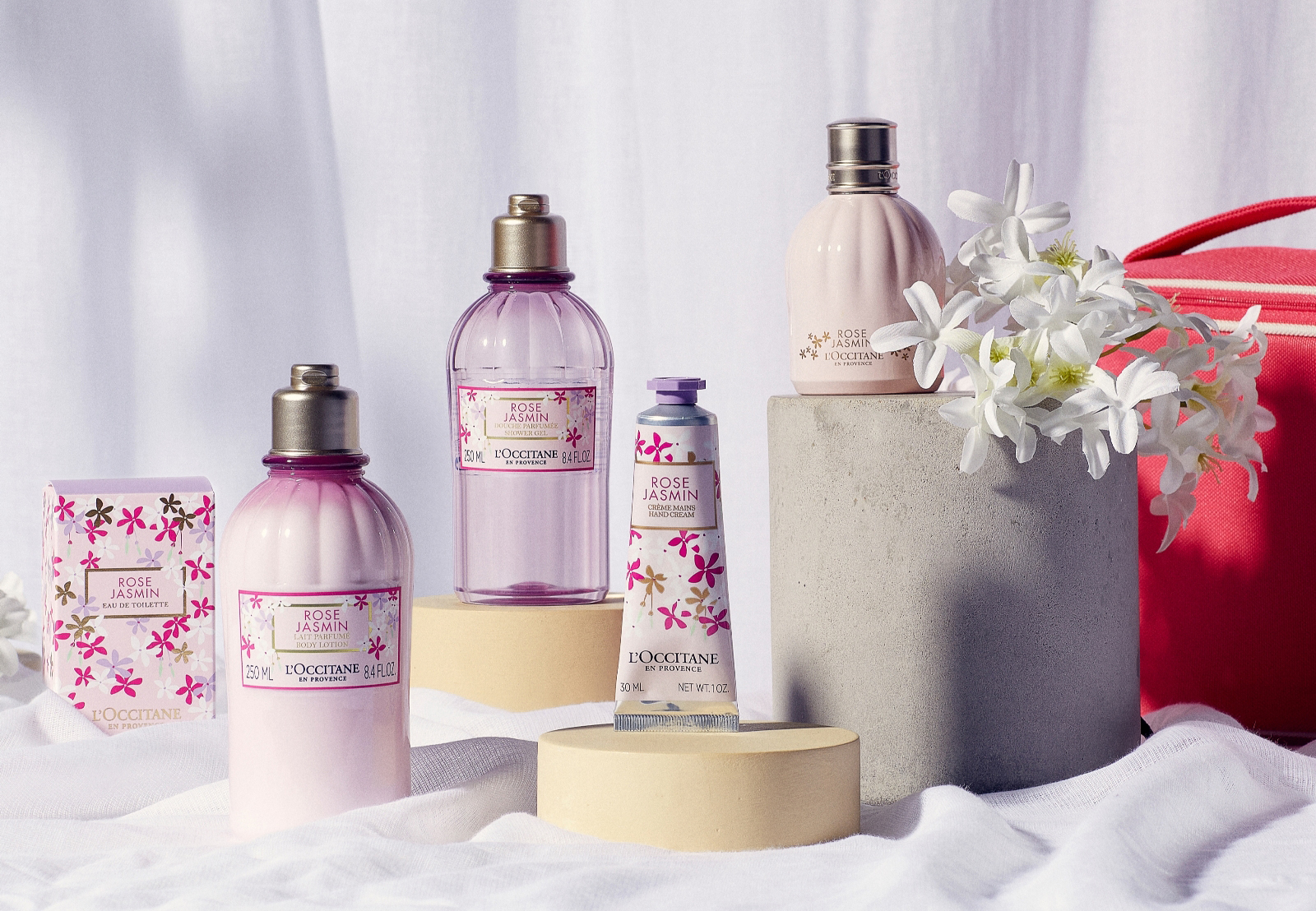 I have an hour of L’Occitane at 11am, which includes the Today’s Special Value. For the first time there are two ‘female’ and two ‘male’ choices, but we’re not the scent police so you just go for whatever appeals to your sense of smell. As always, it’s a really good offer and would make fabulous Christmas gifts if you’re trying to get organised early this year. My other hour on Sunday is 1pm and it’s Joules – a coincidence, as that is the brand of our sofas arriving on Monday. 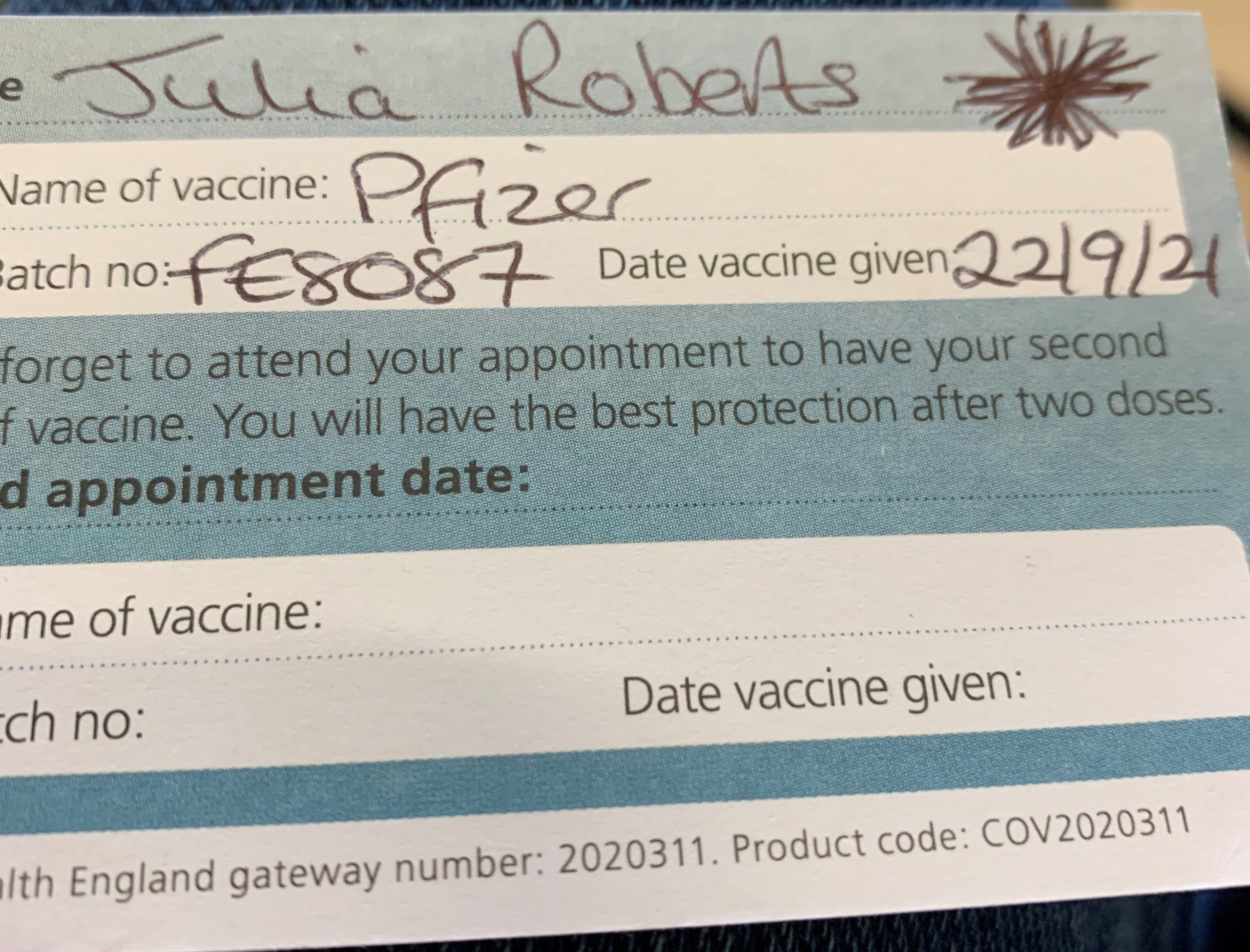 On Wednesday, I was lucky enough to get my 3rd Covid jab (the booster) as my local health authority invited me early because of my Chronic Myeloid Leukaemia. Funnily enough, it was on World CML Day, the 22nd September, selected because chromosomes 9 and 22 mutate to cause this type of leukaemia. It’s my 10th World CML Day since being diagnosed in 2012 and I’m grateful for each one I’ve celebrated. It’s thanks to charities like Cure Leukaemia and Blood Cancer UK who tirelessly raise funds for research into new types of treatment and more effective drugs, that people like me can live a near normal life – they are amazing.

Speaking of charity, I’m hosting an event next Tuesday to raise funds for the South-East Cancer Help Centre, who are there for people coping with cancer. It’s obviously close to my heart as I know how shocking it is to receive any kind of cancer diagnosis, whatever the prognosis.

And then next Friday it is QVC’s 28th birthday – goodness me, where has the time gone? I thought I’d finish with a photo of the original presenters from the 1993 Christmas card. It’s all very different in today’s world, but I hope you’ve embraced all the changes just as I have. 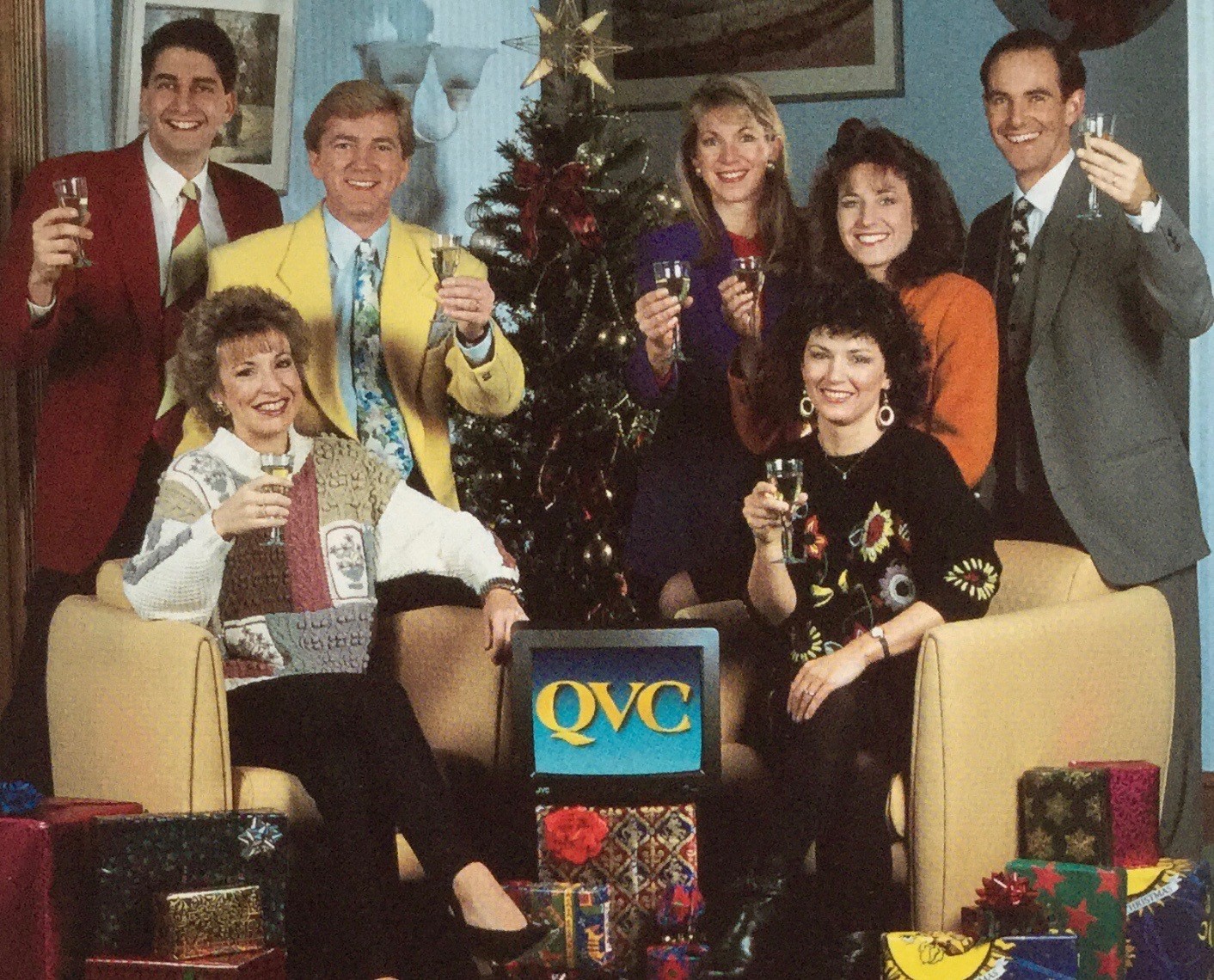 Much love until next time,