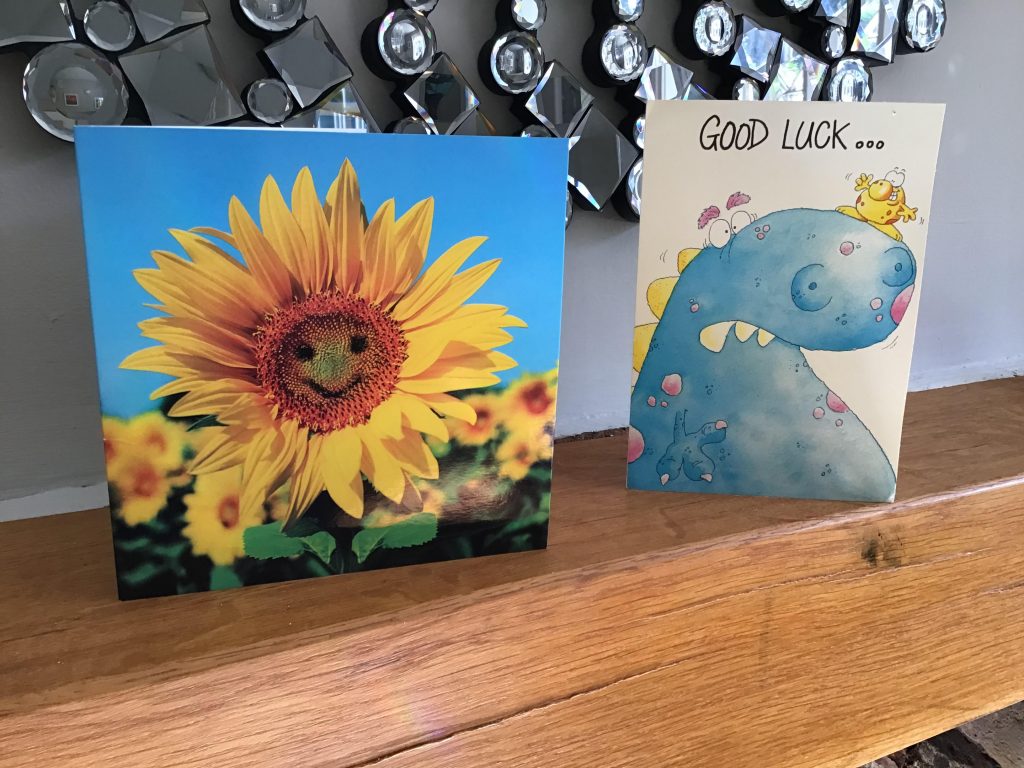 I always think of sunflowers as happy flowers, which is why this card from Chris, celebrating QVC’s 28th birthday last Friday, was particularly meaningful. It’s funny to think of those two cards being given to me for the same celebration twenty-eight years apart. My family have always marked the occasion, although this year we were unable to have the usual get together… I’ll explain a little later in this blog. 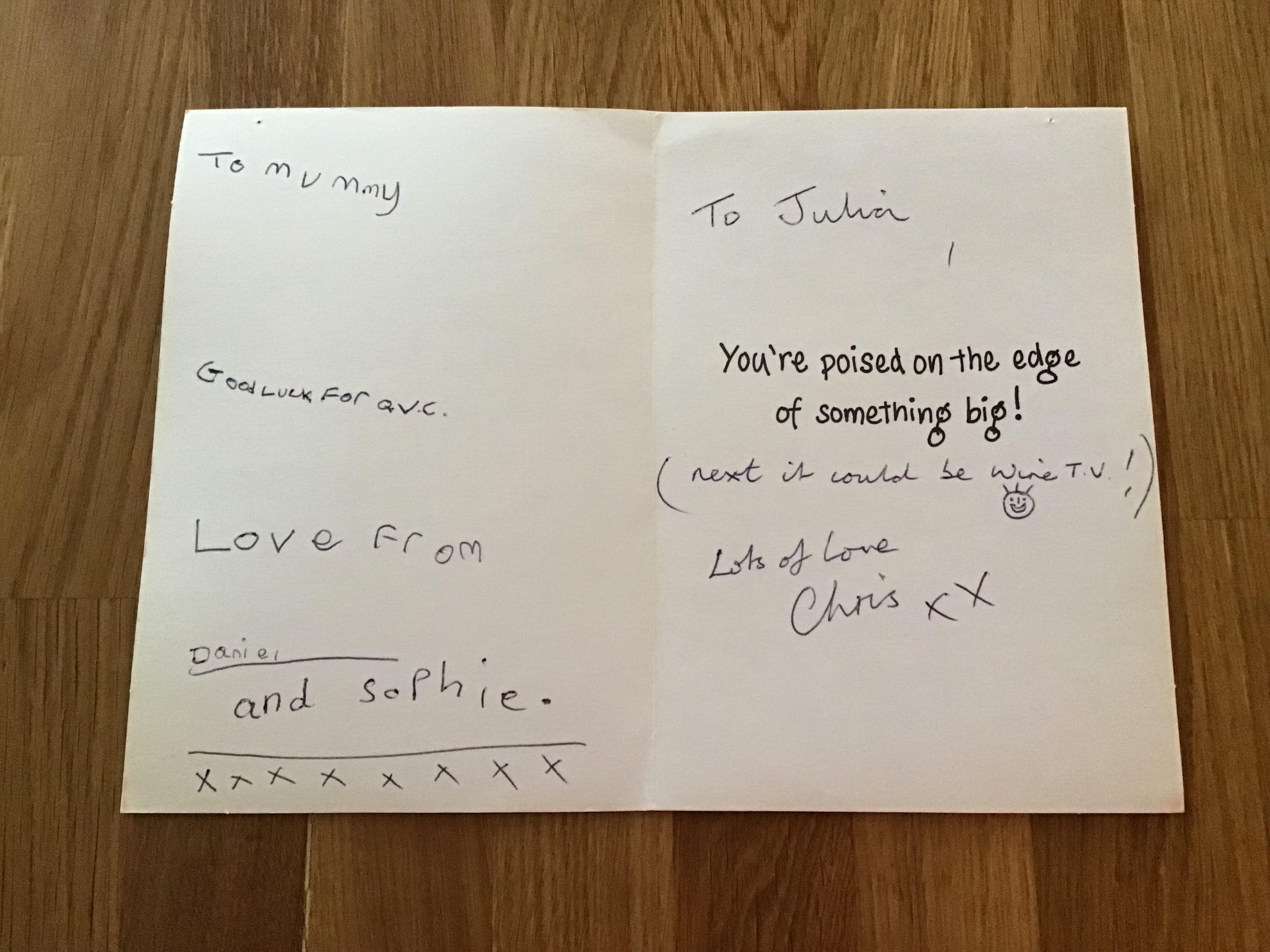 I showed the original card that Chris and our two children sent me when QVC first broadcast in October 1993 live on-air during my Fashion on Friday show with Glen Campbell. Who could have realised just how prophetic the message inside the card would turn out to be? And how adorable is Daniel and Sophie’s handwriting – they were five and six at the time. I’m pretty sure that mine at that age was nowhere near as good – in fact, it still isn’t! 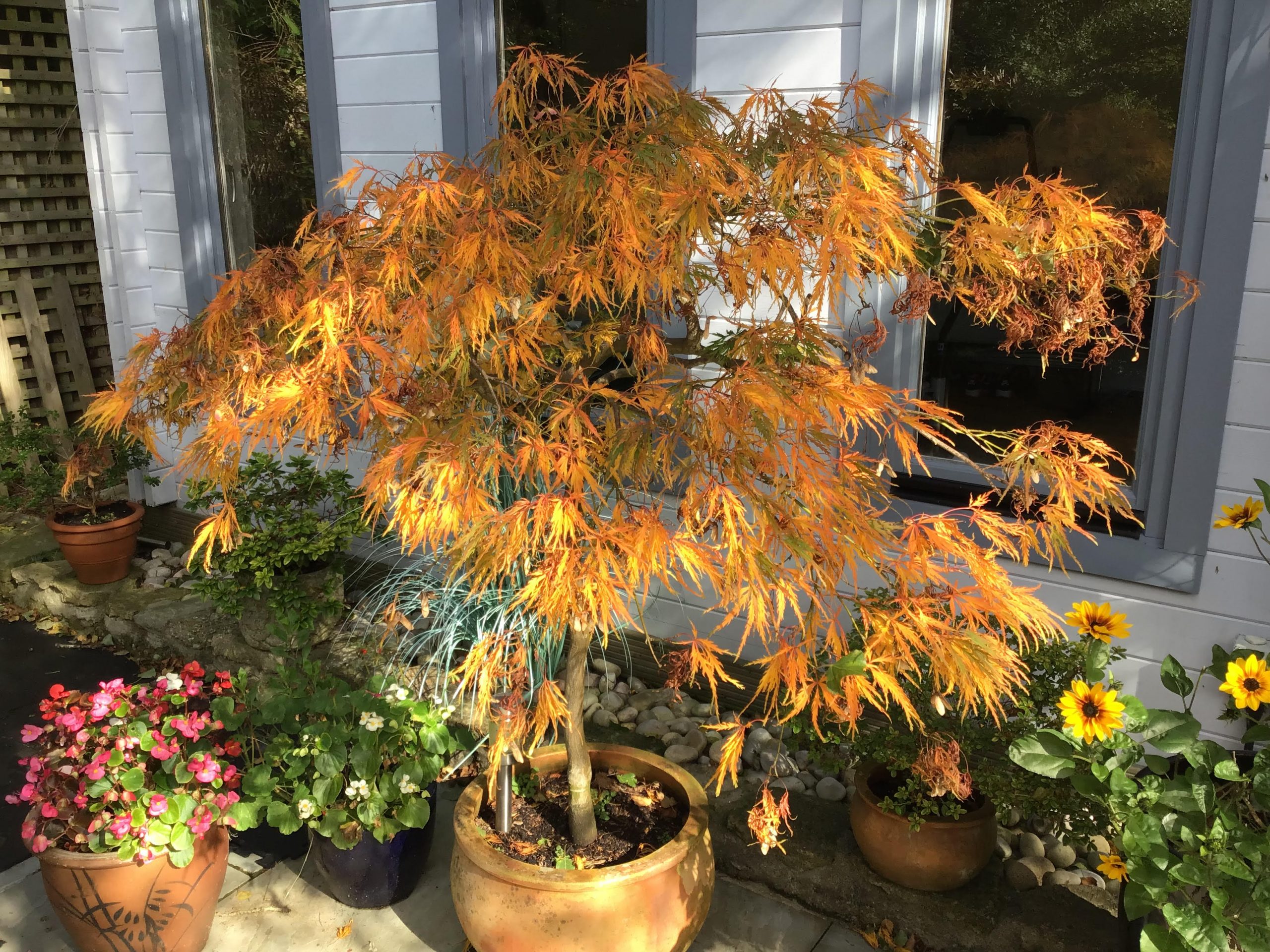 Mentioning our son, he keeps on dropping mega hints about my beautiful Acer, which we dug up from the garden and replanted in a terracotta pot when we had the extension built on our house. His problem is that I love it too, especially as it starts to turn to the colours of autumn. Spot the sunflowers in the picture too. We have two pots of them outside the home gym at the bottom of the garden and another nearer the house on the decking. I have also been bringing them indoors as cut flowers for months now. 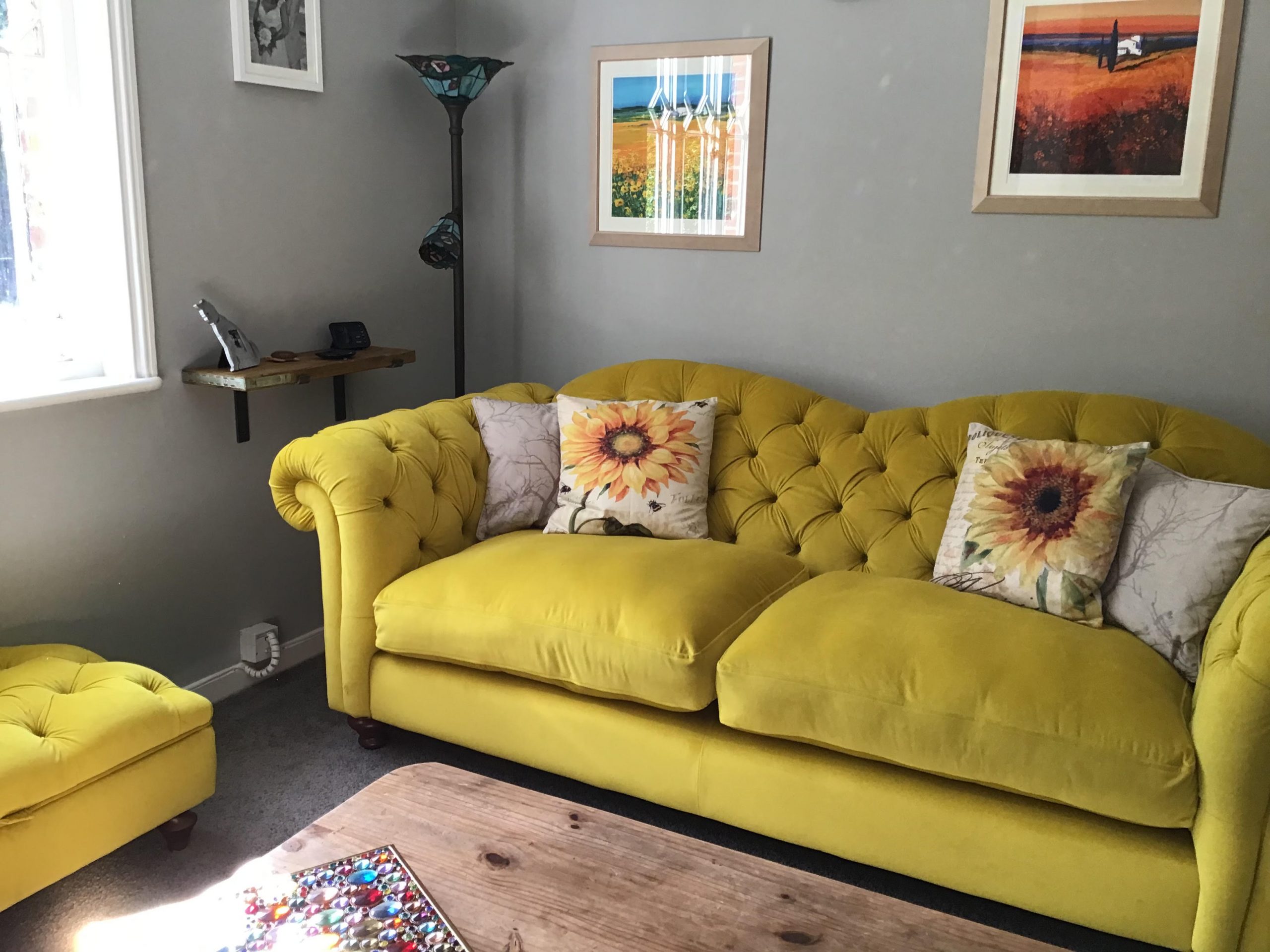 Maybe the happy feeling is as much about the colour as the flowers themselves, which could be the reason that I ordered yellow sofas and at long last they have arrived. They are made by Joules, the clothing brand that we sell on QVC, and I absolutely love them. Notice I have some linen sunflower cushions on the sofas already, but there are some velvet Joules ones set to arrive in a couple of weeks-time. 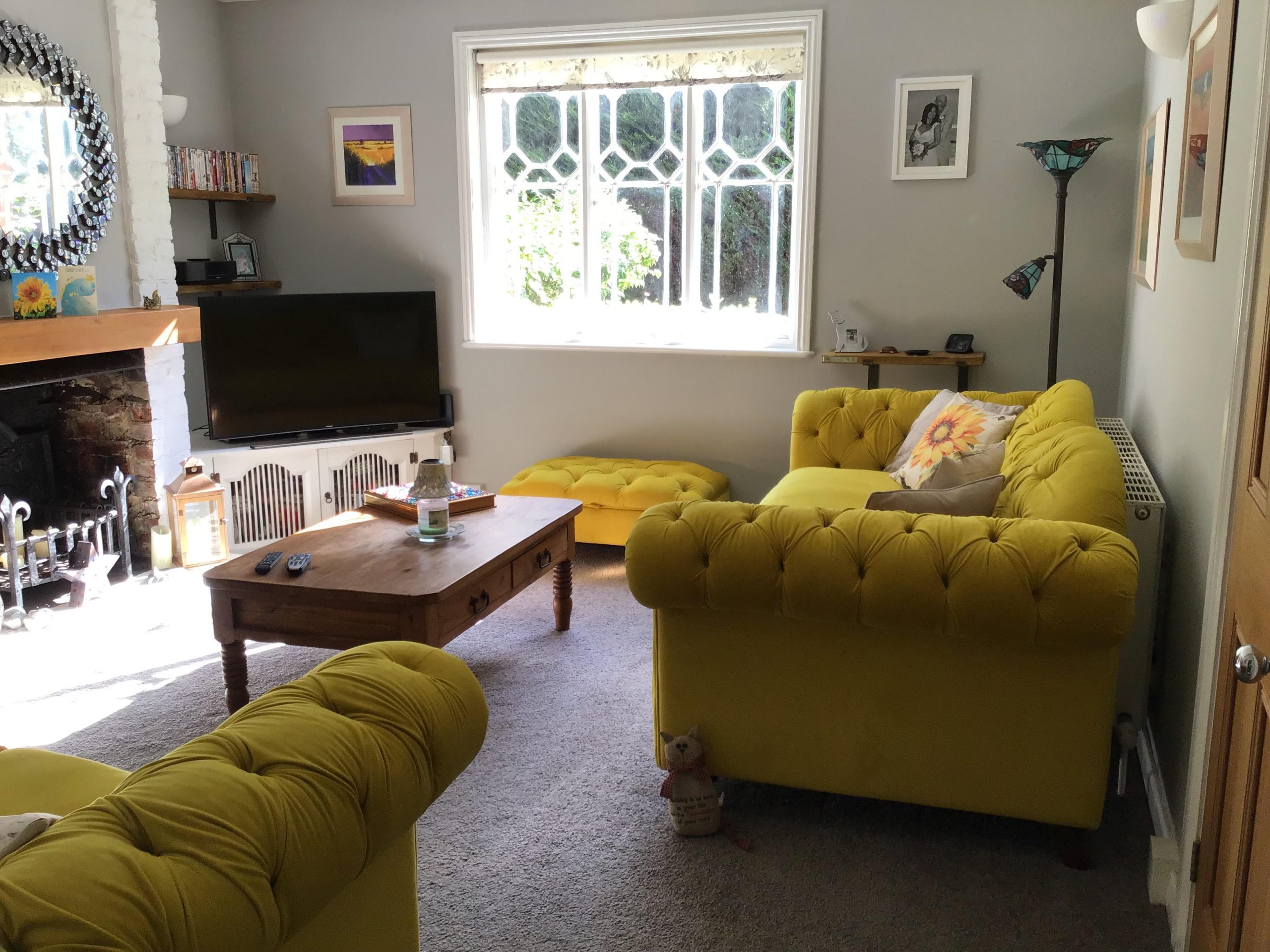 I also shot them from this angle to catch the shelves that Chris has put up. The brackets wrap around the front edge of old scaffolding planks, which Chris varnished – he’s very clever! Also in the picture above the fireplace is my fabulous JM by Julien Macdonald mirror. I was so sad to miss the launch of his brand-new fashion range on Tuesday, but hopefully I’ll have the chance to work with him on shows in the future – maybe even a Fashion on Friday. 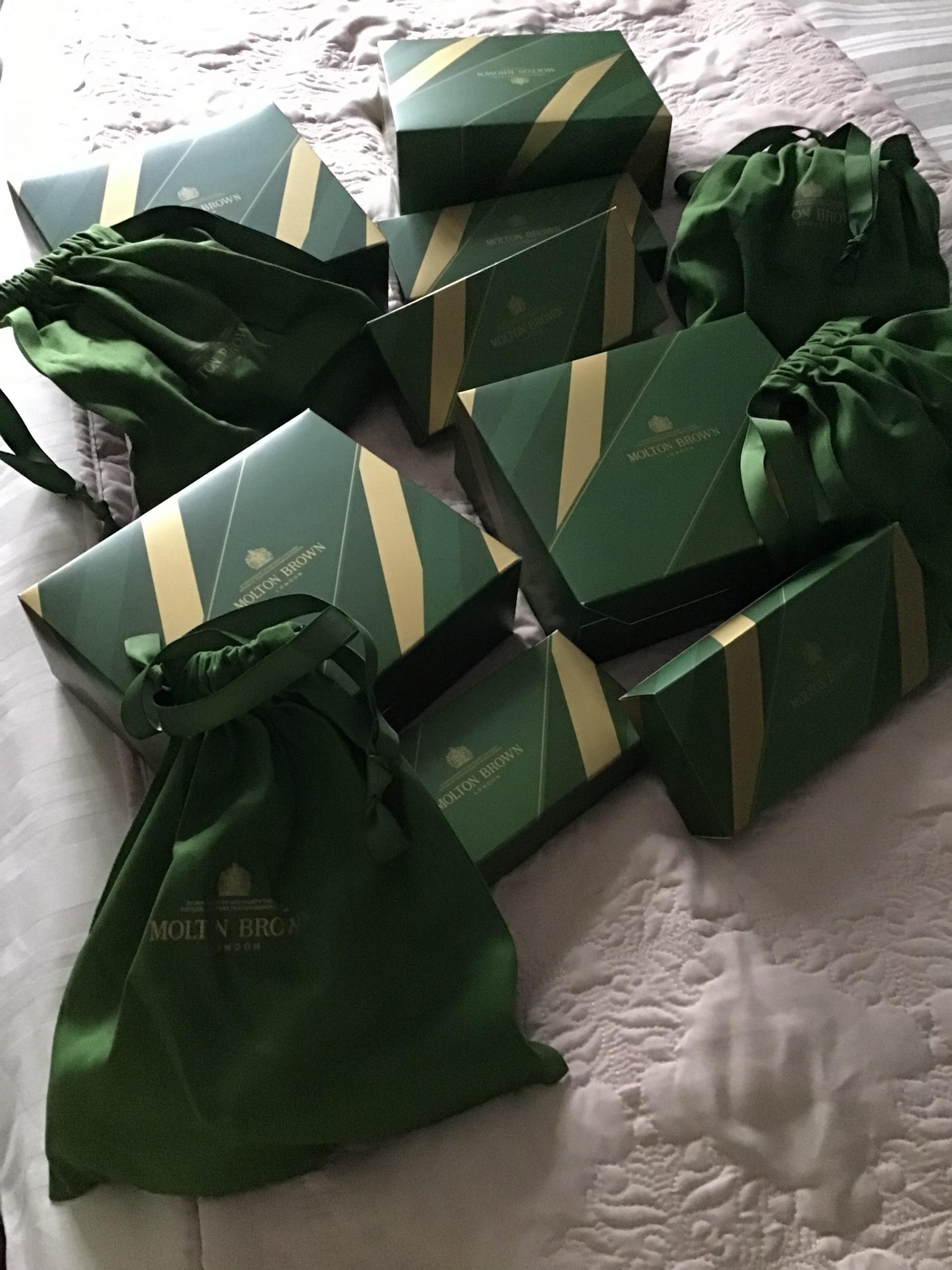 I was also sad to miss the Molton Brown Christmas Today’s Special Value. Well, I say I missed it, but as you can clearly see from this photo, I only missed being on-air with it. I ordered two sets of each of the options, and they arrived on Monday – that’s my Christmas shopping started!

So, as a lot of you already know, I’ve been having problems with my vision for several months now. There was no improvement after my cataract surgery so further investigations were carried out and a different issue was discovered. I will be off QVC for at least the next month following surgery, which I hope will start my journey to better sight – the reason we couldn’t have the annual celebratory get together, as Sophie was struggling with a really bad cold and I couldn’t risk catching it. 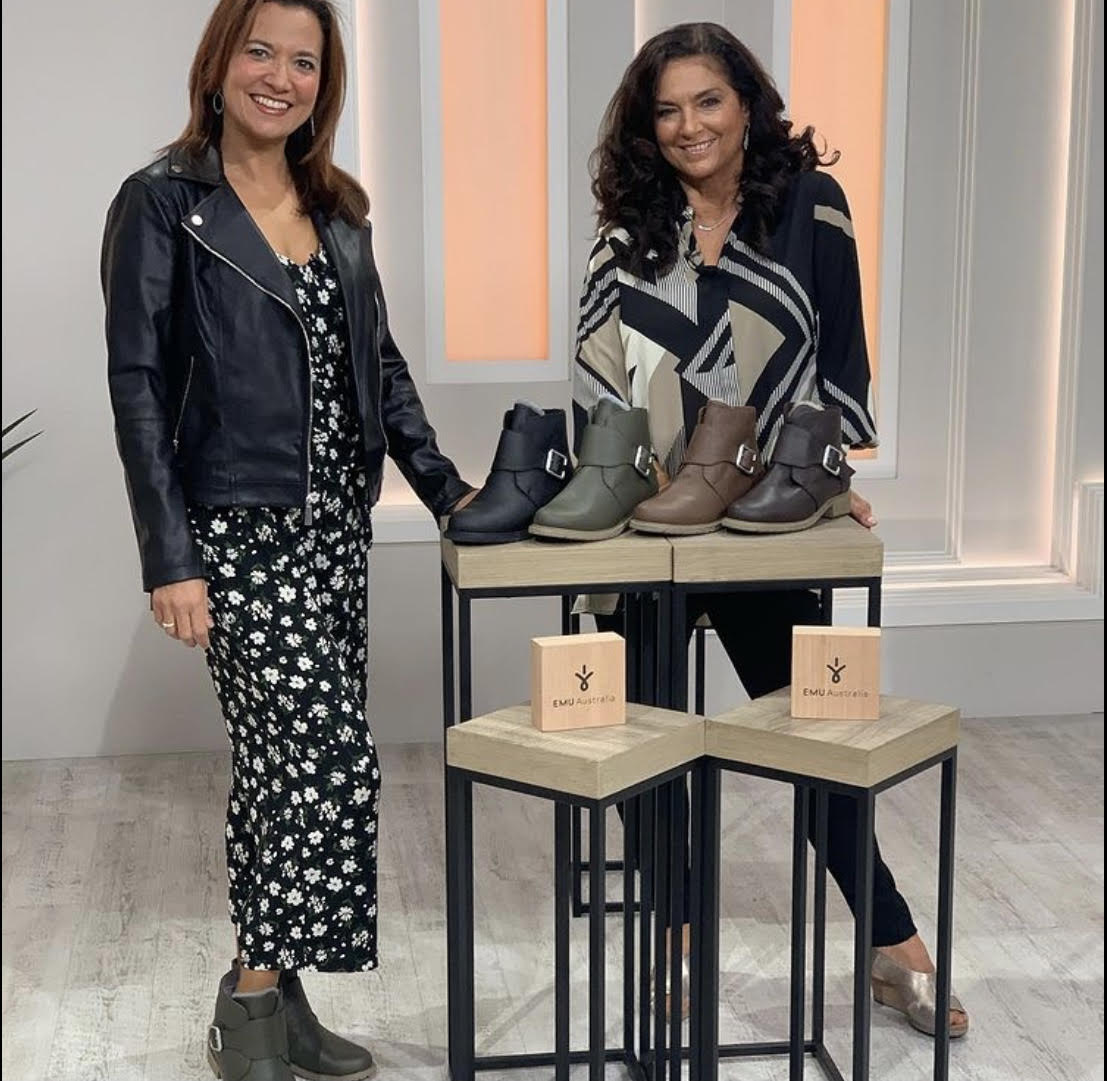 I also won’t be doing my weekly Permission to Pry chats on my Instagram for a few weeks, although if you want to see the latest one with Emu Australia guest, Sarah Booker, it is still on my grid and will be moved to join the other thirty (yes, I said thirty) P2P chats under the middle symbol above my grid.

I’m sad to be missing the QVC Countdown to Christmas for the first time in twenty-eight years, but sometimes even I have to accept that my health must come first.

Until I see you next, and hopefully much clearer, enjoy all the fabulous Christmas offers heading your way.