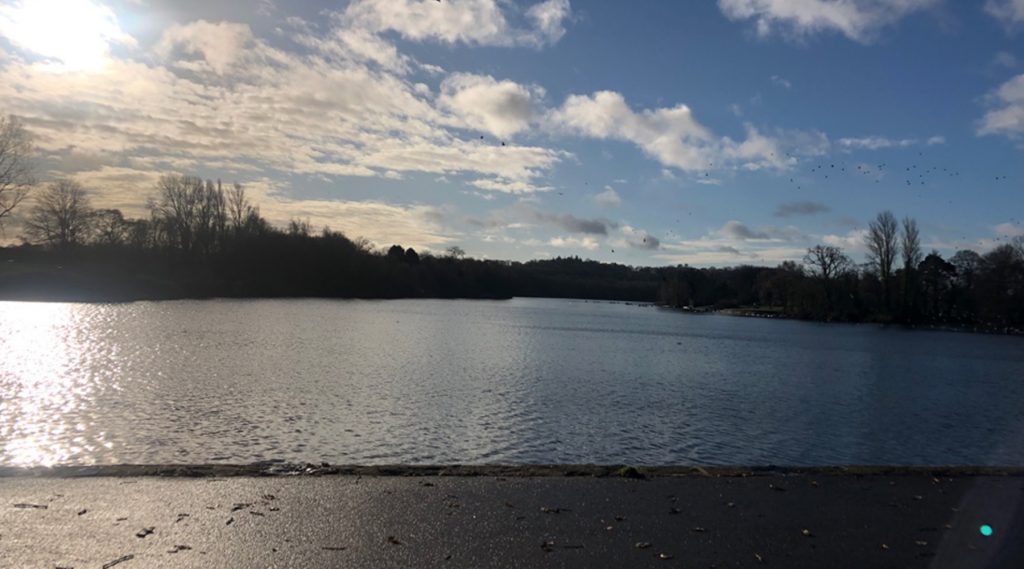 Yay! The tree is finally up and decorated and all I need to do is to connect my Kasa Smart Wi-Fi plugs to the app so I can time when the lights come on and off! J If I was actually saying this to you rather than writing it down, you may well have noted an element of relief in my voice. That’s because when Colin and I first bought the tree, spent ages trying to get it to stand straight, and then added water to the stand we discovered the stand itself had a hole in it. Sadly, not before it leaked out onto a rather large area of carpet! Of course the whole thing had to come down, which wouldn’t have been so bad if I hadn’t have already had the lights set up on it, but the hole was mended, the carpet dried and the tree is now resplendent in its stand and looking rather lovely. 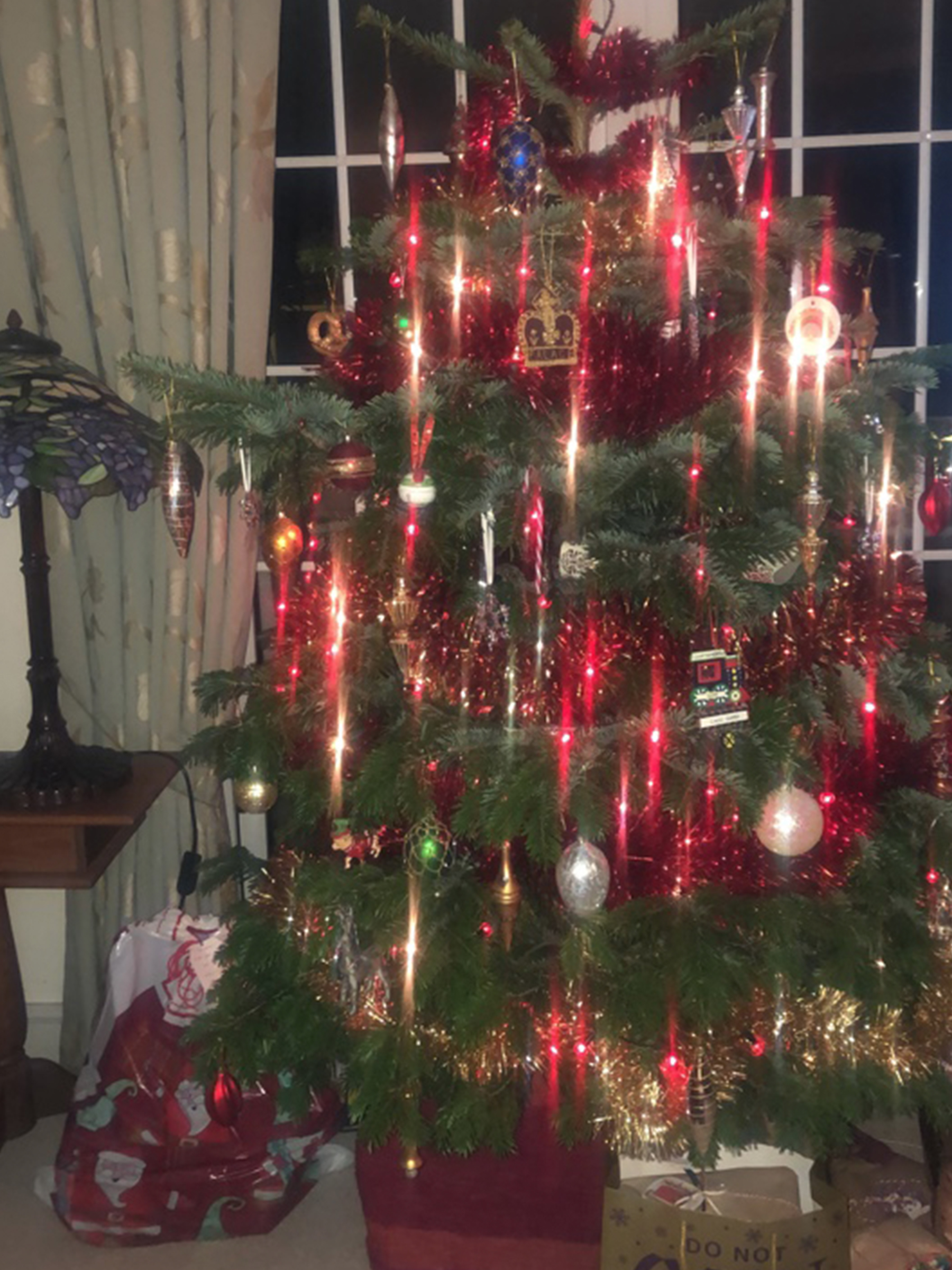 I’m not quite sure why the photograph I took of it at nighttime looks like this (bit of camera shake?) but here is a better photograph taken this morning in the sunshine. I do love a real tree although the faux ones we sell at QVC get better and better each year. 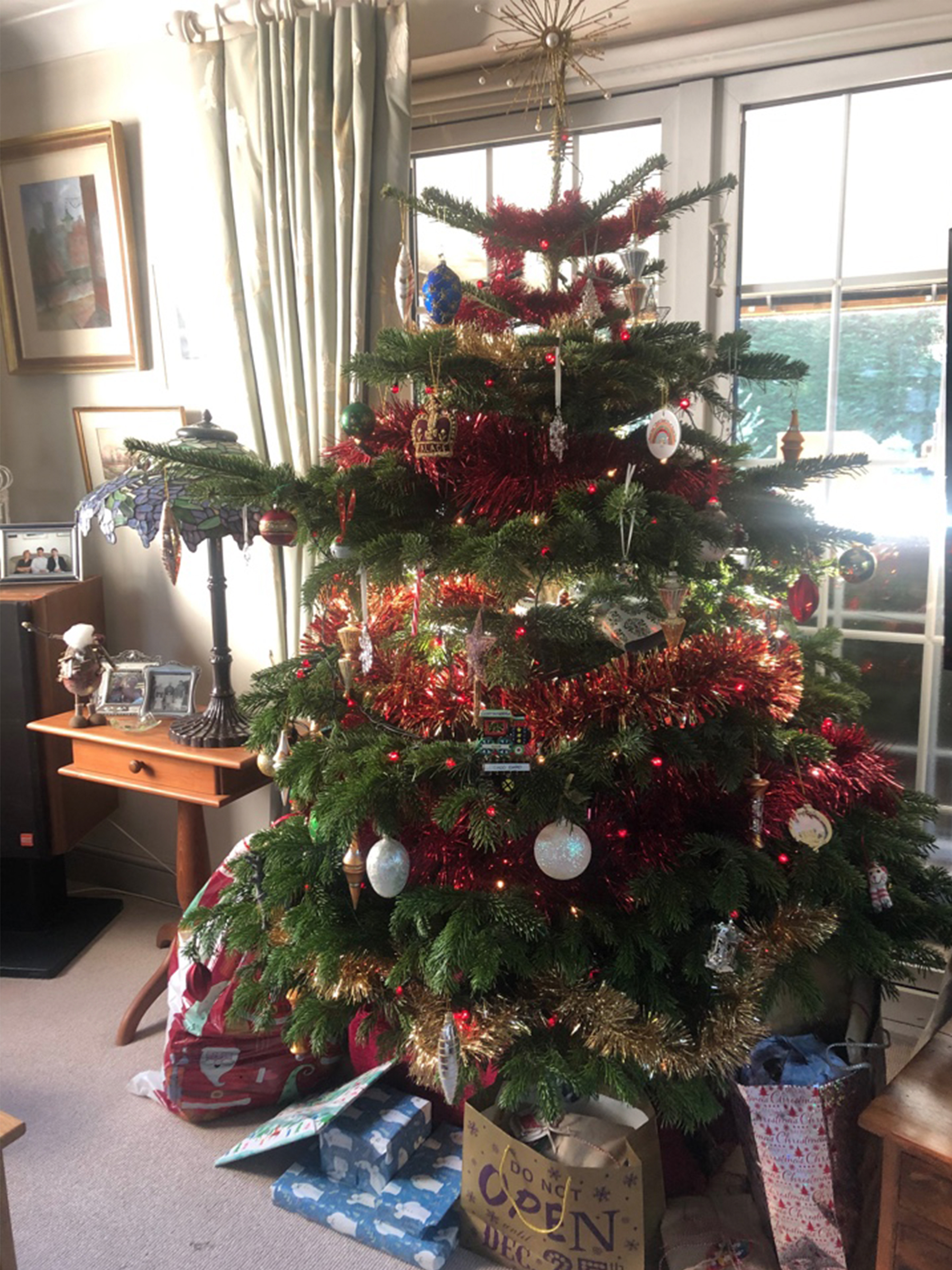 So how are you? It seems as though a lot of us are far more organised this year than last and have had the house decorated, presents bought and wrapped and cards sent by the first week in December! I don’t include myself in that number as this year I seem to be chasing my tail. I’ve been gathering gifts since the middle of the year but have only wrapped a small number of them so far – I’ve got the next four days off so plan to have that all sorted by the weekend. I did though manage to get the family’s parcel sent off to Colin’s daughter Lily who lives in Bondi, Australia, and also my niece Clare who is just around the coast in Manly. Lily’s gifts arrived and she’s keeping them stashed away until the 25th, but Clare’s present was for the baby she is expecting today! Sadly the gift hasn’t been delivered although I posted it on the 1st, but she told me that everything in Oz is predictably slow at the moment due to huge numbers of people having to send presents rather than visit their folks. I’m keeping everything crossed it will get there soon, J along with the baby!! So exciting!!!

How have you been doing with your Christmas plans? It’s so difficult with the restrictions in place to decide who’s going to be spending Christmas with whom especially if you come from a large family as we do. I think we’ve managed it pretty well though so far and as we all keep saying, this isn’t forever… 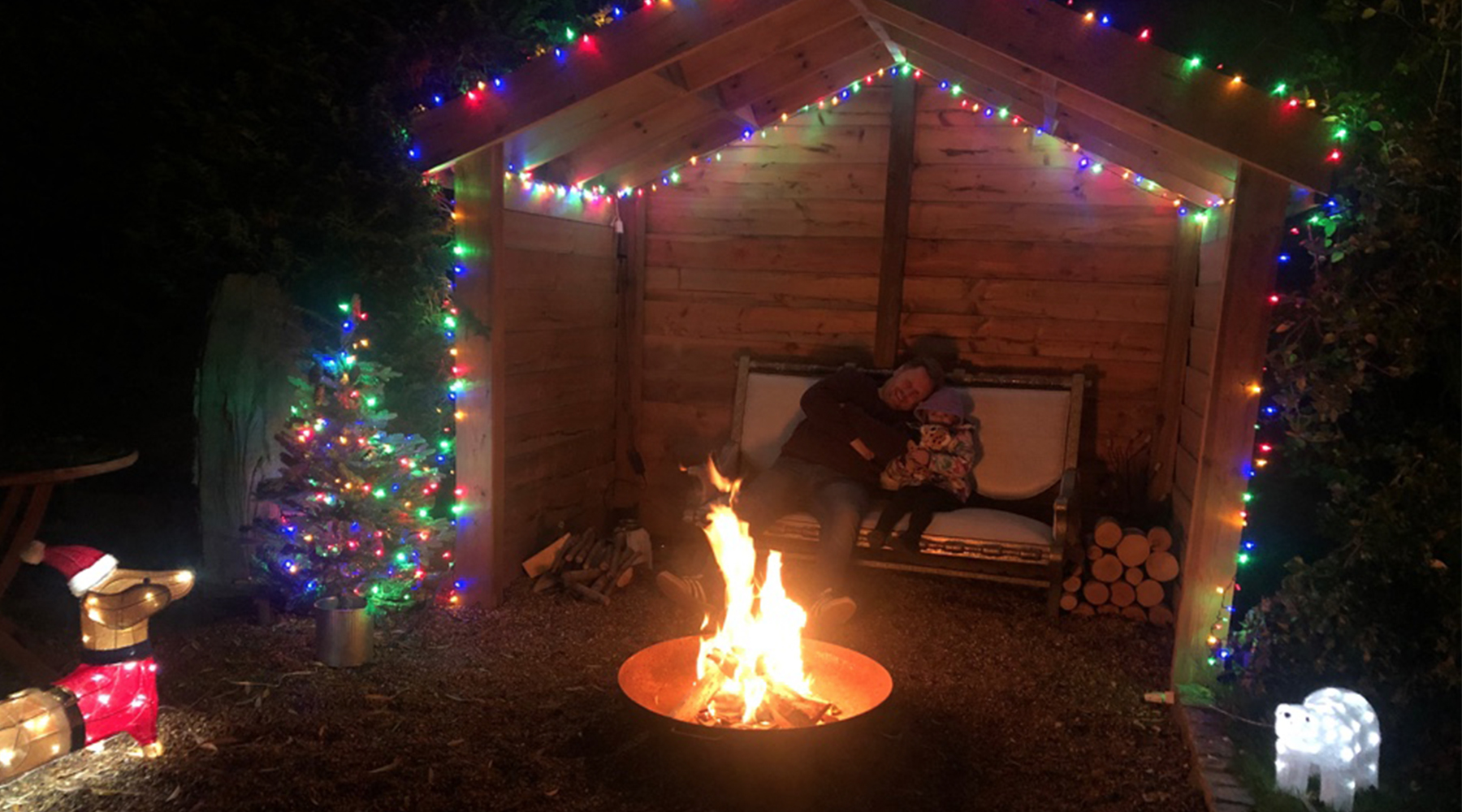 Last time I wrote, I told you about the Christmas Grotto that Colin had created in our garden and completely forgot to put a photograph of it in the blog! I thought I’d rectify that now so you can see it in all its glory and also see one of the little people it was made for. We had a wonderful couple of days with Honey when she came to stay, and she was very impressed with Grandad’s decorating skills. 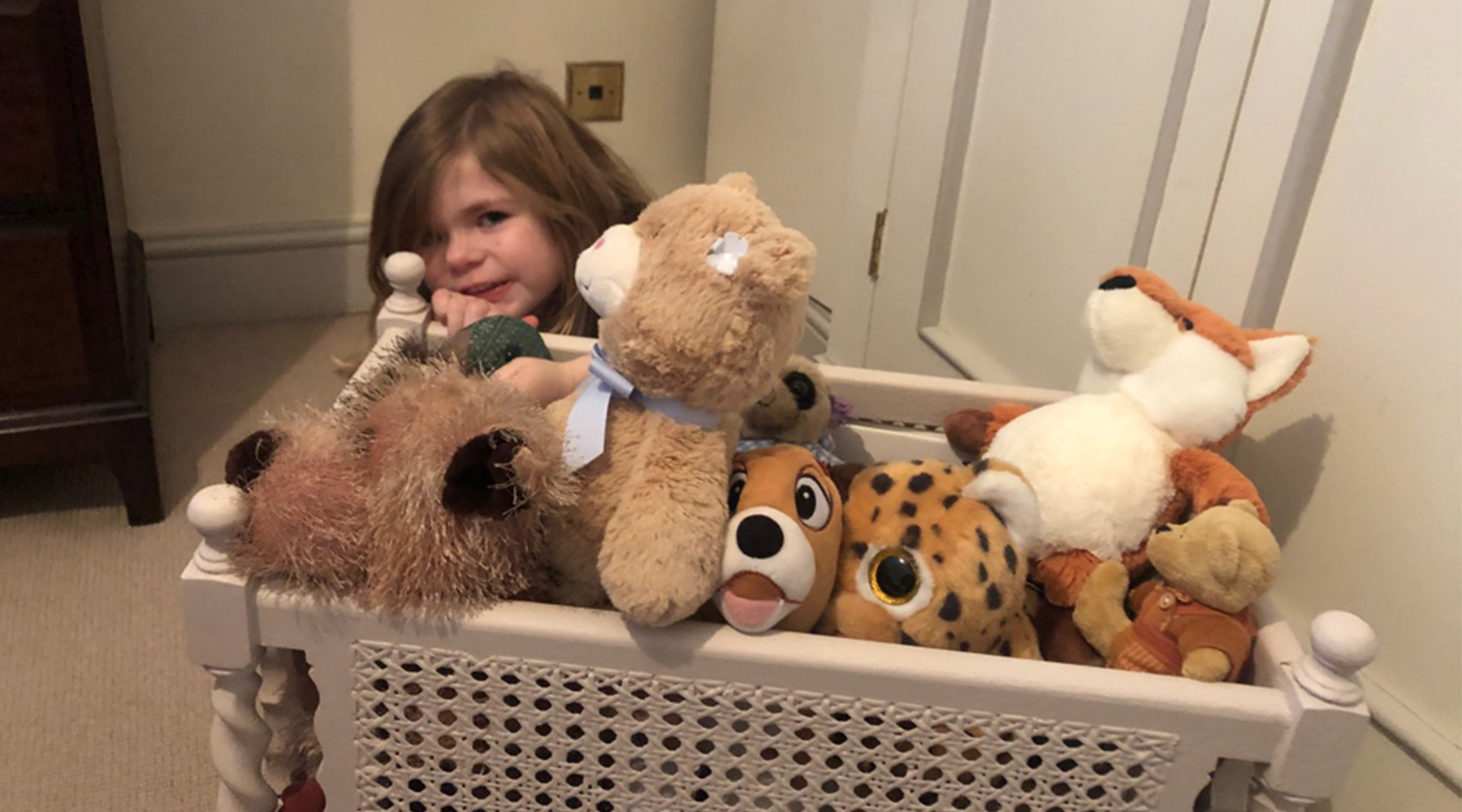 Her favourite thing was the illuminated dachshund which didn’t surprise me as she loves her two little Chihuahuas and her cat, Mitten. She also told me that when she grows up in addition to wanting to be a vet, she is planning to be a teacher, a singer and a cheerleader! And I bet she will be J. It was so good to have some special time with her, and we made the very best of the day making biscuits, sorting out her toys, painting and crafting all before 9am! 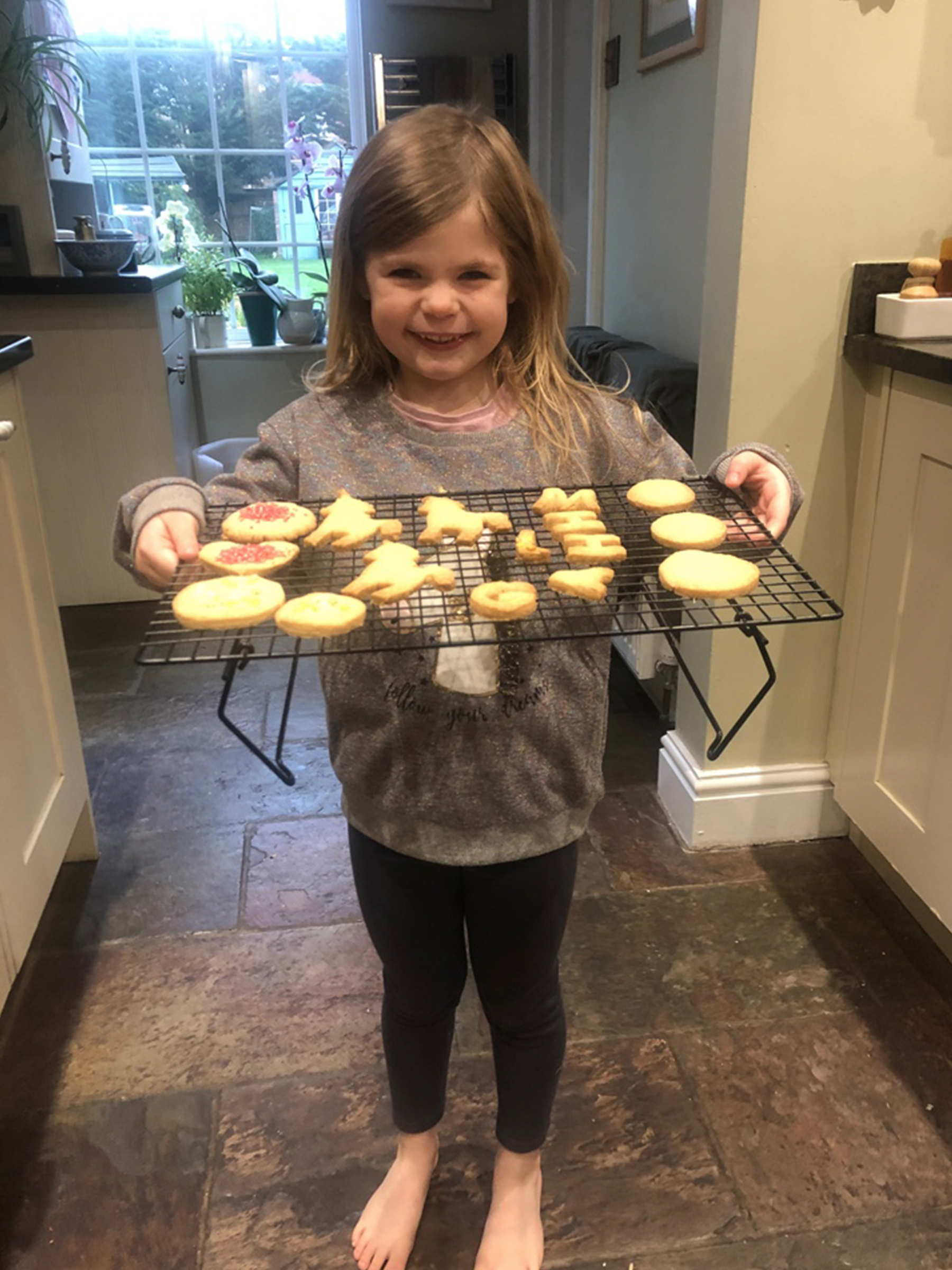 Last week I went back up to see both Honey and Lucy and we had a fabulous walk with the dogs – Bear Bear and Penny – around Coate Water Park. It had been pouring with rain earlier, but the sky cleared, and the sun shone and that took the sting out of the freezing temperatures. I managed to get some more of the Cuddl Duds fleecewear leggings while they were in stock and was very grateful to be wearing them. They are incredibly lightweight but warm and because they are available in navy, grey or black you could buy them for the guys too! 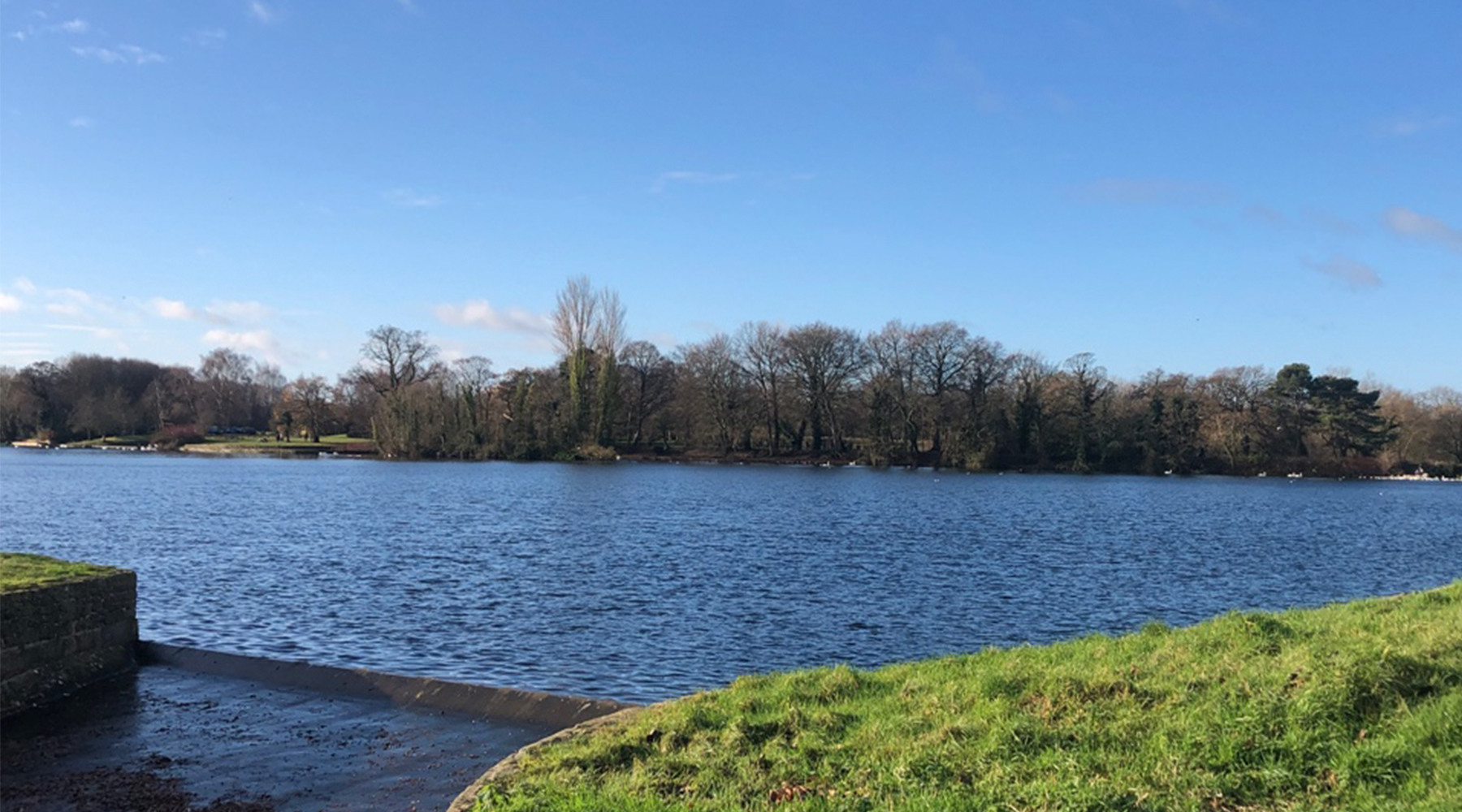 My son Jack is currently working outside and he’d be lost without his fleece thermals. I’m sure they’d be equally well received by anyone who watches outdoor sport or plays golf or even goes fishing. QVC are still guaranteeing delivery for Christmas if you order before end of play this Sunday the 20th so hopefully that will help. 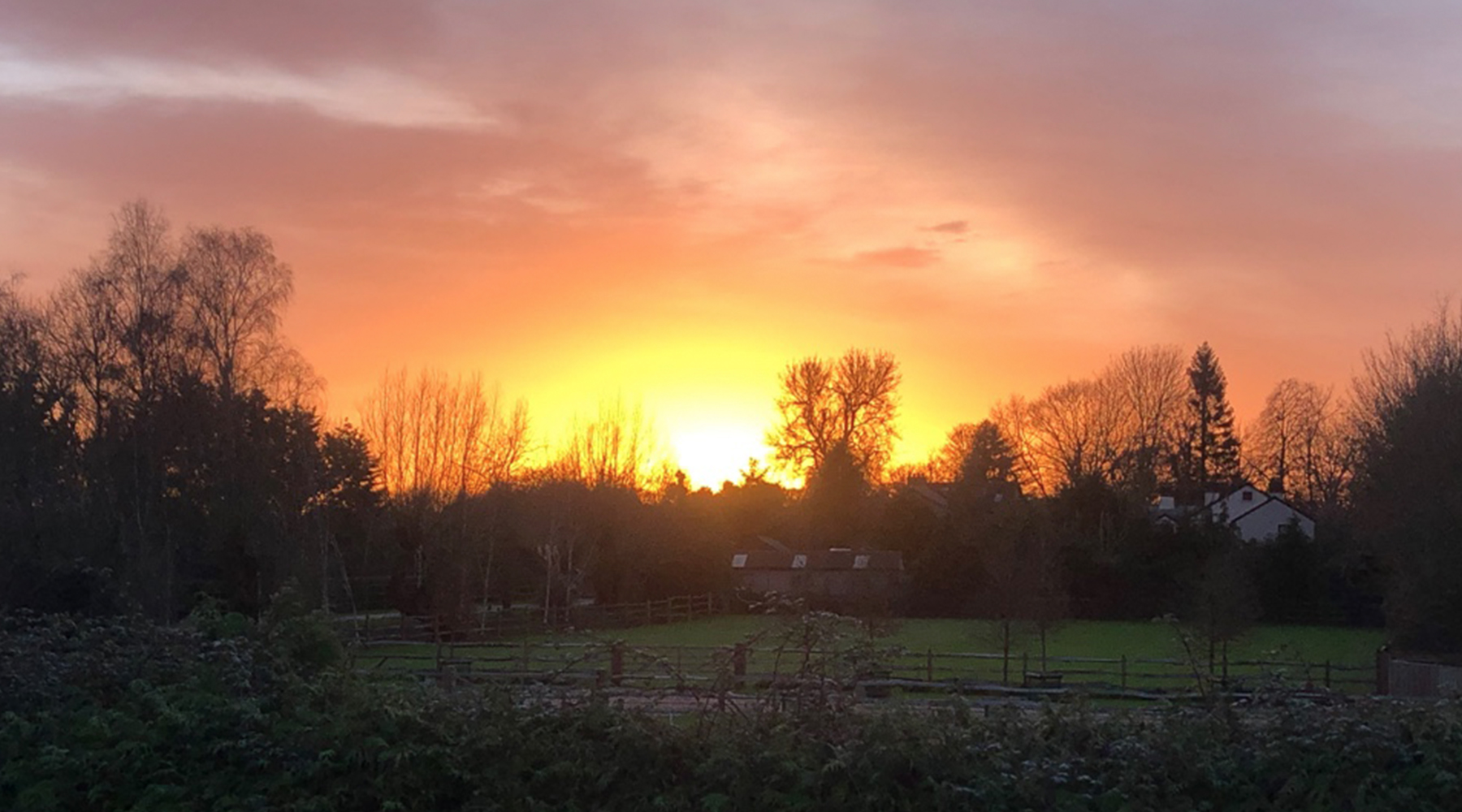 I’m getting my hair cut and re-coloured later today – it’s just got to the stage where it’s a teeny bit too long and I’m finding it harder to style it. Crazy when I consider how long it used to be. I’m rather wishing I’d waited to have my new passport photos taken until after Jo my stylist has performed her magic. Strange to think it’s been 10 years since the last photo. I’m glad it’s being replaced though as I had the last one renewed just eight days after my cancer diagnosis. I remember sitting in the photo booth wondering if I’d get the chance to travel again… But I have, and so much more besides, and I feel very blessed.

Talking of travelling, I had the most horrendous journey back from work on Tuesday night. The M4 has been closed off in sections for the last two years as they work on the smart motorway system, and it was shut at junction 3. The diversion signs were sparse and, having left QVC at 10.15pm, it took me until 1am to get home. The journey would normally take just 30 minutes. I could have cried. I’m sure if I had a proper sat nav that constantly updated the situation I’d have been home far earlier, but sadly I had to rely on Waze on my phone and thanked the Lord and also James Murden for my Rush Charger as the battery ran out while I was pootling about somewhere near Hounslow and I’d lent Colin my in-car charging lead! I hope if you have to travel over the Christmas period you won’t encounter any roadworks. 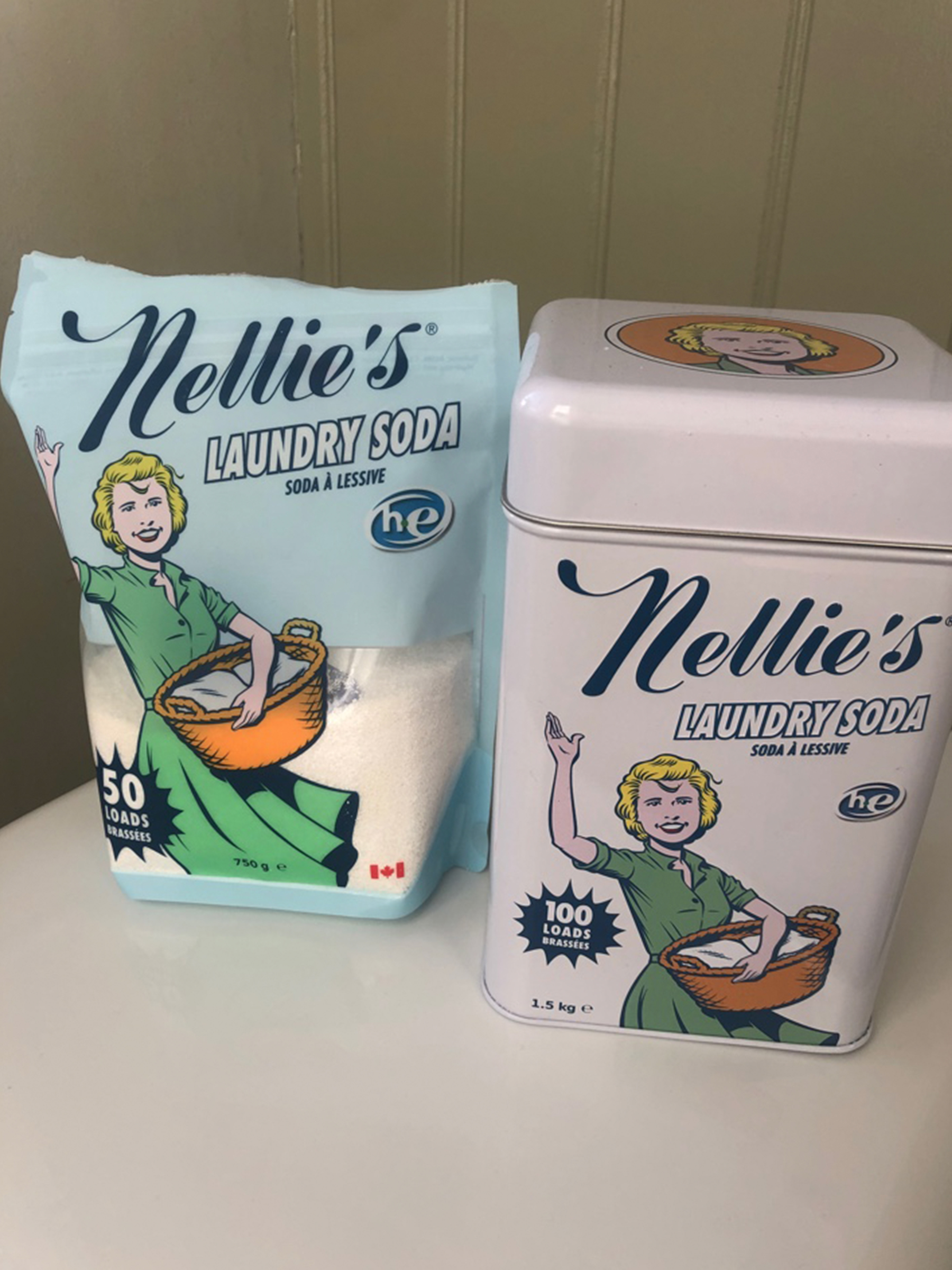 Actually, our drive has looked a bit like a building site over the last fortnight as Colin has been digging out new borders, cutting down trees and completely re-shingling everything. He’s even wired outdoor lights around the perimeter which will be a Godsend when I get home in the wee small hours. Poor man hasn’t been very lucky with the weather though as it’s been hammering down most days and I’ve had a mountain of VERY muddy washing. I know I shouldn’t be airing my dirty laundry in public, but I was given a sample of a new washing powder to try – Nellie’s Washing Soda (809822)– and being a tad skeptical I thought I’d set it the challenge of sorting Colin’s filthy work clothes. Well, I was mightily impressed and even happier to know that I’m going to be launching this product next Tuesday night at 9pm as a Today’s Special Value offer. I’ve been using a liquid laundry product for years, but this is a powder and contains a coconut-based surfactant which is natural and dissolves really quickly, so you don’t get any residue. I didn’t do any spot cleaning before I washed the clothes and put them through a 40-degree wash for two hours with just one scoop. There wasn’t a mark on them when I took them out which I thought was fabulous. I know that Kathy Tayler, Katy Pullinger and Anne Dawson have all tried it and they’ve been very impressed too, so I hope you can join me to see why it works next Tuesday.

I’ve had some great shows over the last few weeks, and because my hours have been varied, I’ve managed to catch up with a lot more of my presenter friends, some of whom I’ve not seen for months. It’s been great to catch up, but it has made me realise how difficult this pandemic has been for all of us, but in a myriad of different ways. Mental health and wellbeing have never been more important and talking things through with friends and family to my mind is imperative if we want to remain positive. I’m really pleased to have been asked to take part in a special series of podcasts that Will Gowing is putting together for January 2021. They will all focus on mental wellbeing and give us a chance to share experiences and how we manage stress. This year has been so hard for so many, and without support it can feel overwhelming. I just pray that Christmas will give us the chance to be with those we love so we can recharge and head into the new year feeling more positive. It’s all about moving forwards and not looking back… 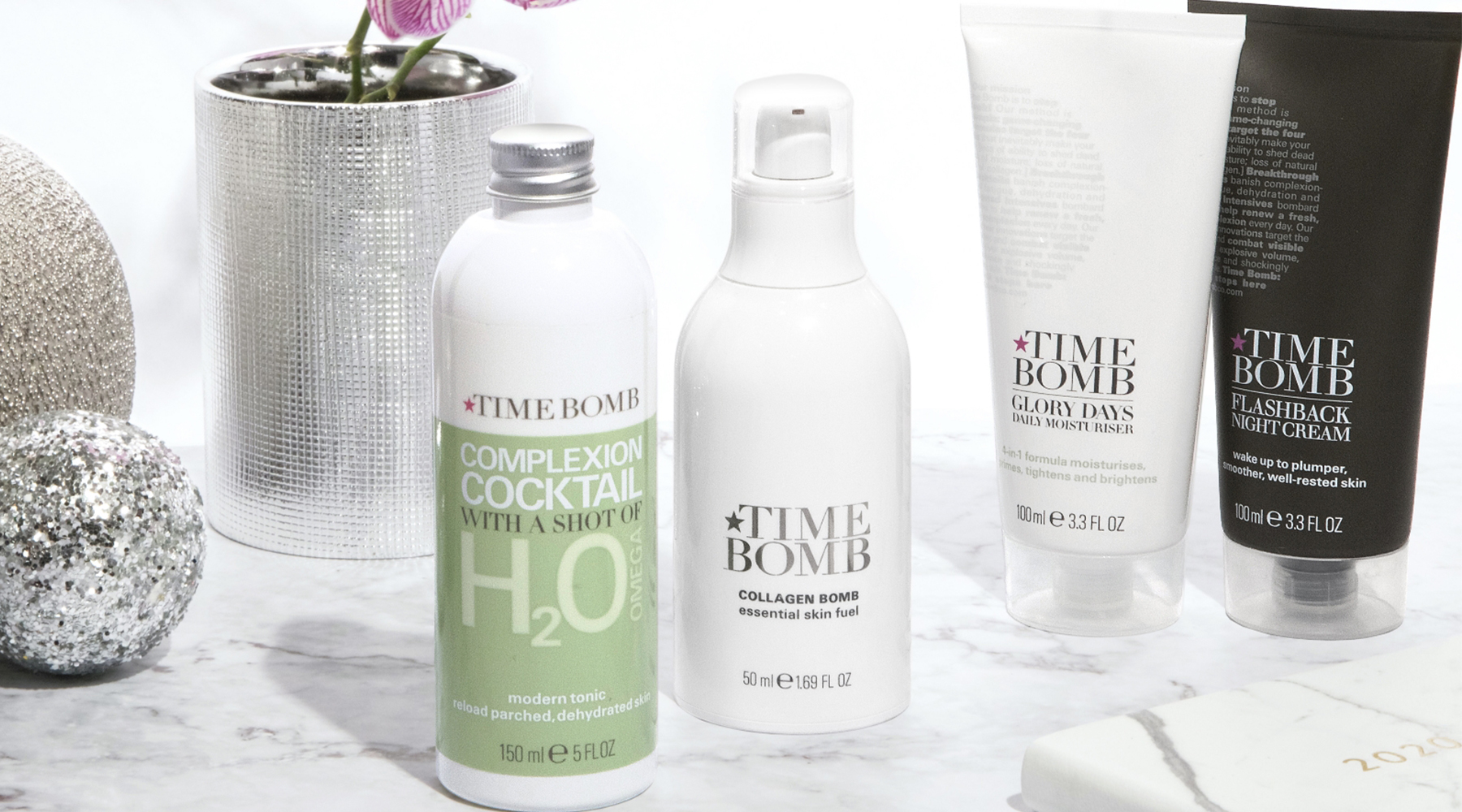 One final thing to mention is that lovely Lulu will be joining me on Monday night for the launch of her Four Piece Anti-Ageing Hero’s Supersize Collection. It’s been a while since I’ve worked with her, but she is such a joy to spend time with and this really is a fabulous offer. You’ll be able to buy it on presell from today here.

I’ll sign off now, but thank you as always for your love, support and comments here on the blog. It’s been a tough one for us all, but together we are stronger and the network we have created has worked its magic and supported so many of us this year, more than most.