My festival going days aren’t over! 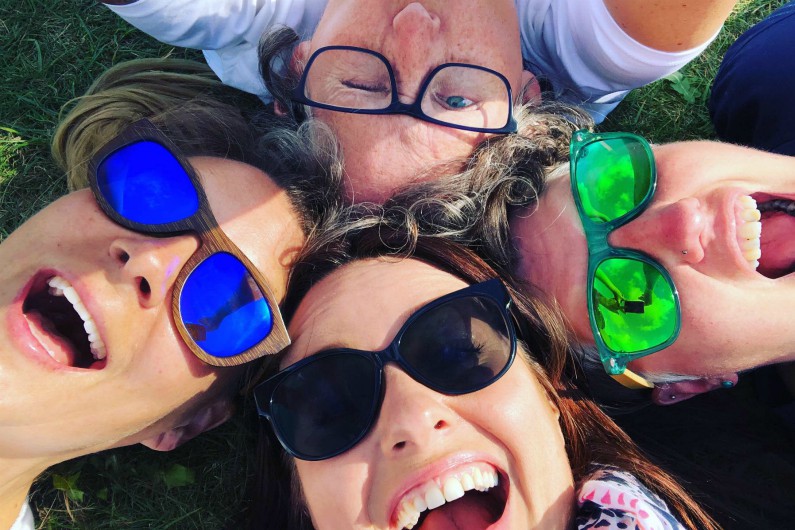 This month marks my 16th anniversary at QVC! Where on earth has that time gone to?

During my early years at QVC I became a huge fan of Glastonbury Music Festival, which is something I hadn’t expected when I was invited to go to my first one. I had no idea what to expect really, but I was most pleasantly surprised.

When you are camping in a tent and pooing in a portaloo there’s no room for being precious. I found this to be a great leveller. It meant there was no ‘keeping up with the Joneses’.

I don’t go in for all that, myself. I believe we are all of equal importance, and we all have a right to be here on this planet. Sometimes there are elements of our modern age which mean that people identify their worth by what they possess or by how much more impressive their possessions are than someone else’s.

I enjoy the fact that some of the things we rely on in the ‘real world’ are absent in an environment such as this. Everything is pared back so we are all on the same footing, and much of the social hierarchy is removed. There’s only so far the Joneses can go with tent envy and who has the best blow-up bed!

I enjoy the communal “we’re all in this together” mentality that I’ve been lucky to find at festivals I’ve attended. There’s a lot to be said for community – meeting new people, being forced into closer quarters than we are used to.

It had been a few years since I’d been to a festival but the Vegan Campout came to my attention and I thought it sounded like a good one, seeing as I’m vegan! By the way, non-vegans are welcome, too.

Many of you know Kate Green of The Royal British Legion. She and I have recently launched this year’s QVC Poppy Collection and it’s got off to a flying start, thanks to you!

Kate and her wife, Michelle, who are also recent converts to veganism, and my gorgeous friend for over thirty years, Nichola, and myself decided we’d all go and campout together.

Mrs and Mrs Green had never been to a festival and absolutely loved it! They are fab at cooking from scratch and love a bit of naughty nosh.

They brought some of their own food and equipment to cook with but we all sampled the ecstatically good vegan food on offer. Nichola is a big fruit-lover so was pleased with the offerings of fresh smoothies and juices. She also loves yoga and got up super early for classes.

Nichola and I met when we were just 17 years old and worked on dance contracts together around the world. We found ourselves dancing around to some great old retro tunes just like it was the good old days. We don’t get to see each other often enough, but it’s always just like it was yesterday when we get together.

People were extremely friendly and courteous, and the festival site was also treated with a lot more respect than I’ve seen at previous festivals.

People are vegan for many reasons, the top three being animals, health and the environment. I saw a great aerial photo comparing how Reading festival campsite was left with the Vegan Campout, and it was quite an eye-opener.

That’s not to say there aren’t people who care about the environment at other festivals, but it was interesting how much rubbish was left at other sites including tents, camping chairs, plastic blow-up beds and so on.

I recently watched a feature on The One Show about this issue. They highlighted the good work of people who made good use of the abandoned detritus, a bit like The Wombles… if you’re old enough to remember them! They made bags, clothes, sent discarded tents to refugee camps and so much more!

One of the most significant elements of the festival for me were the featured speakers. Earthing Ed, aka Ed Winters, is always very articulate and passionate. There were people from all walks of life coming at veganism from different perspectives.

The Avant Garde Vegan, aka Gaz Oakley, is famous for his gorgeous recipes. He even has a dish on the Wagamama menu – not just for vegans! He was very warm and enjoyable to listen to… made me hungry!

My two outright highlights of the entire weekend were two presentations given by two very remarkable men. Firstly, coming from a health point of view, there was Dr Michael Klaper. He has been living on a plant-based diet since 1981 and you’d never guess he’s in his 70’s now!

He’s so bright, alert, fit, healthy and so very enlightening on matters pertaining to health. If you’ve ever seen a documentary called “What the Health” you’ll recognise him from that and more besides. He reignited my interest in studying nutrition. It’s something I’ve wanted to do for a while now and has definitely been bumped up my to do list after meeting him.

Now for one of the most moving speeches I’ve ever heard in my life given by holocaust survivor, Alex Hershaft. Wow. Just wow. There were over 7000 people in attendance and you could have heard a pin drop during his time on stage.

Many of us were crying as we listened to him tell his story. I’ll leave it to you to look him up if you’re interested. He is a gentle soul with a very important message whether you are vegan or not.

Nichola surprised me when we stopped at the services on the way home. She bought me the most beautiful bouquet of flowers and some of my favourite vegan chocolates by Booja Booja! I was so touched!

I had done the driving, which I didn’t mind at all, and this was her way of saying thank you. I must admit I welled up!

When I arrived home my partner, Jamie, had sent a surprise through the post for me to enjoy once home. Some gorgeous bath bombs to soak away the festival muck! What a sweetie!!

So, my festival days are far from over but I think I’ll stick to these smaller ones and leave Glastonbury to my daughter, seeing as she played five sets there this year. Having said that, if she ever gets that chance again I’ll brave the mud and try to be first in the queue for tickets!!

I tell you what, festivals and rain seem to go hand in hand. I’m honestly so glad I had my Joules waterproof jacket with me!

The huge pockets were handy, too. It was a recent Todays Special Value – did any of you go for it? Do you love it, too? If you love Joules I do have a show coming up today (Weds) at 2pm on the QVC main channel. I could do with some of their wellies for future fests, actually.

At 3pm I’ll be with my mate Kate again for The Poppy Collection. It’ll be over on The Style Channel. Some of you may know I designed two collectors edition pieces with them this year, and what an honour it was!

I’m truly thrilled that people have been buying these special edition pieces. It means so much to the people who rely on the help of The Royal British Legion. I, myself, have become a member and am in awe of all the good work they do. You can look at my recent blog to learn more about the pieces I was invited to help create as well as shop the rest of the range here.

Once again, thank you from the bottom of my heart for all the support. Together we have raised over £1.8 million pounds. We couldn’t do it without you.

Thanks for taking the time to read my blog. I hope you have a wonderful week. I’ll be sharing my son’s chocolate brownie recipe and my daughter’s deeply meaningful tattoo next week, so drop in next Wednesday if you’re about.