Menu
Stories > Presenters > Debbie Flint > A lovely weekend with my descendants in Wales!

A lovely weekend with my descendants in Wales! 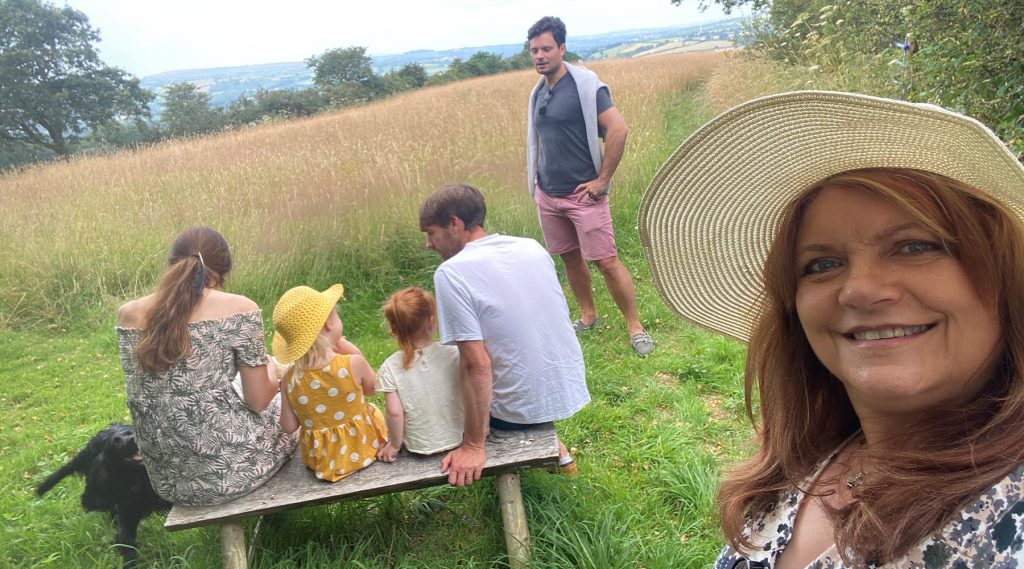 Last weekend was the annual trip with Bradley and Blake down at Lauren’s in Ceredigion, west Wales. It was so lovely to see little Phoebe playing with Blake. They are so close in age – three and a half-years old and two and three quarter-years-old, and since last year, Phoebe has become really articulate. So nice to listen to them playing, talking, and a bit of fighting, obviously! 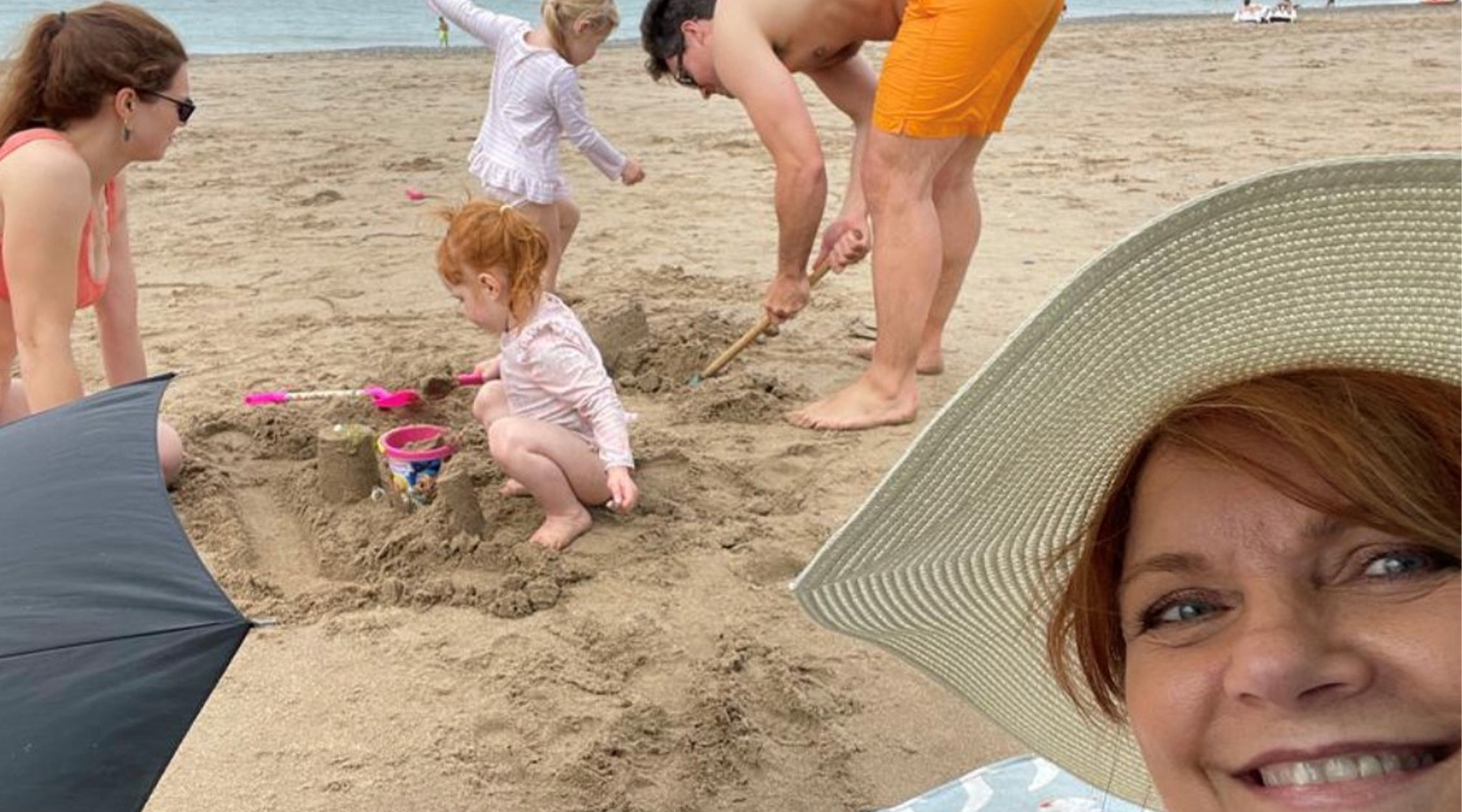 We had a couple of days out, including one down on the beach, which was fabulous because it was at the end of the really hot weather, but wasn’t too stifling. I sheltered away as usual. But the kids had a great time and built some super sandcastles and mermaids’ tails. 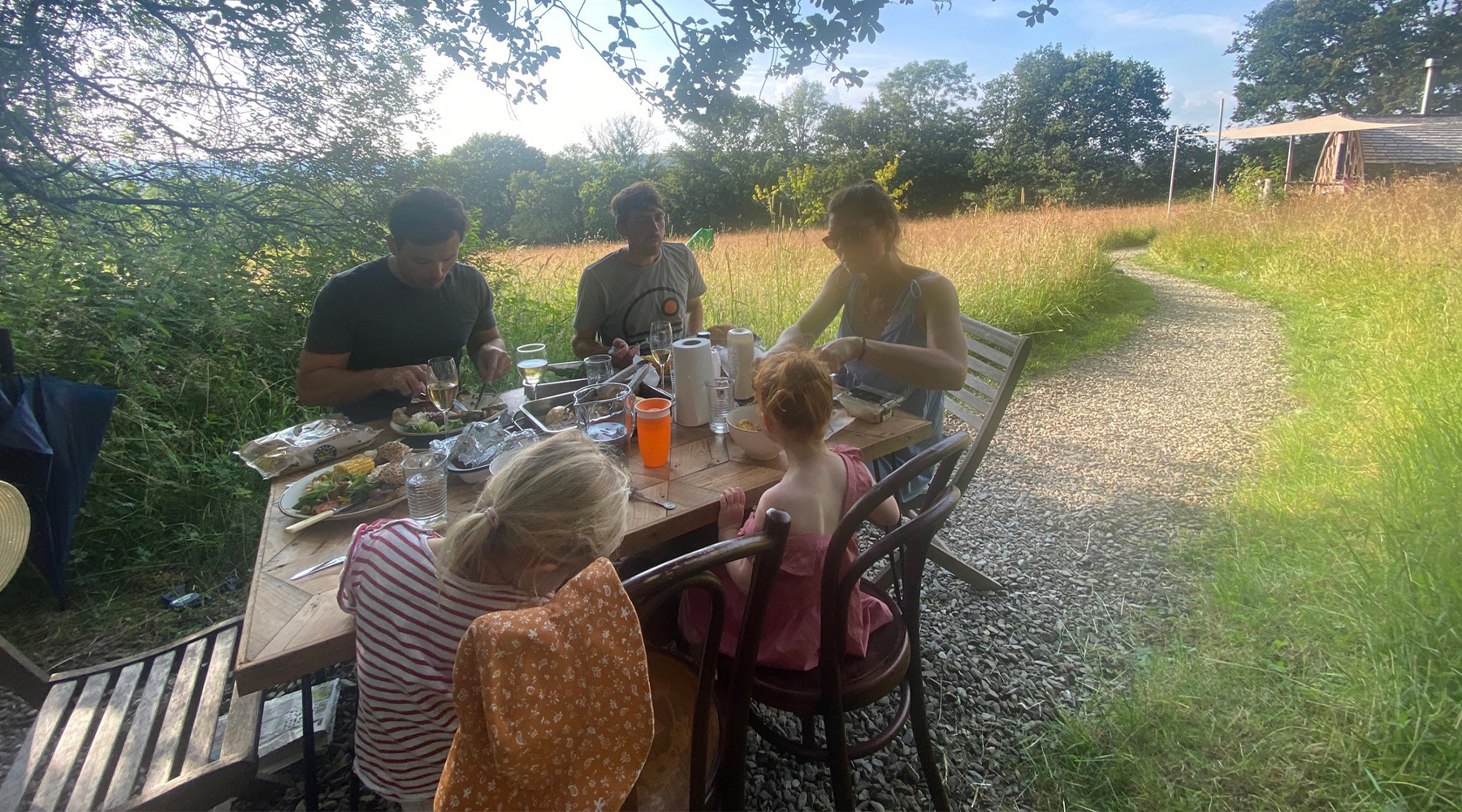 One evening we had a delicious supper under the trees outside their holiday let cabin. Nick did us proud as usual with a delicious barbecue and the kids enjoyed it too, then climbed on the gate afterwards. I took this charming little photo, which I’m going to have framed. 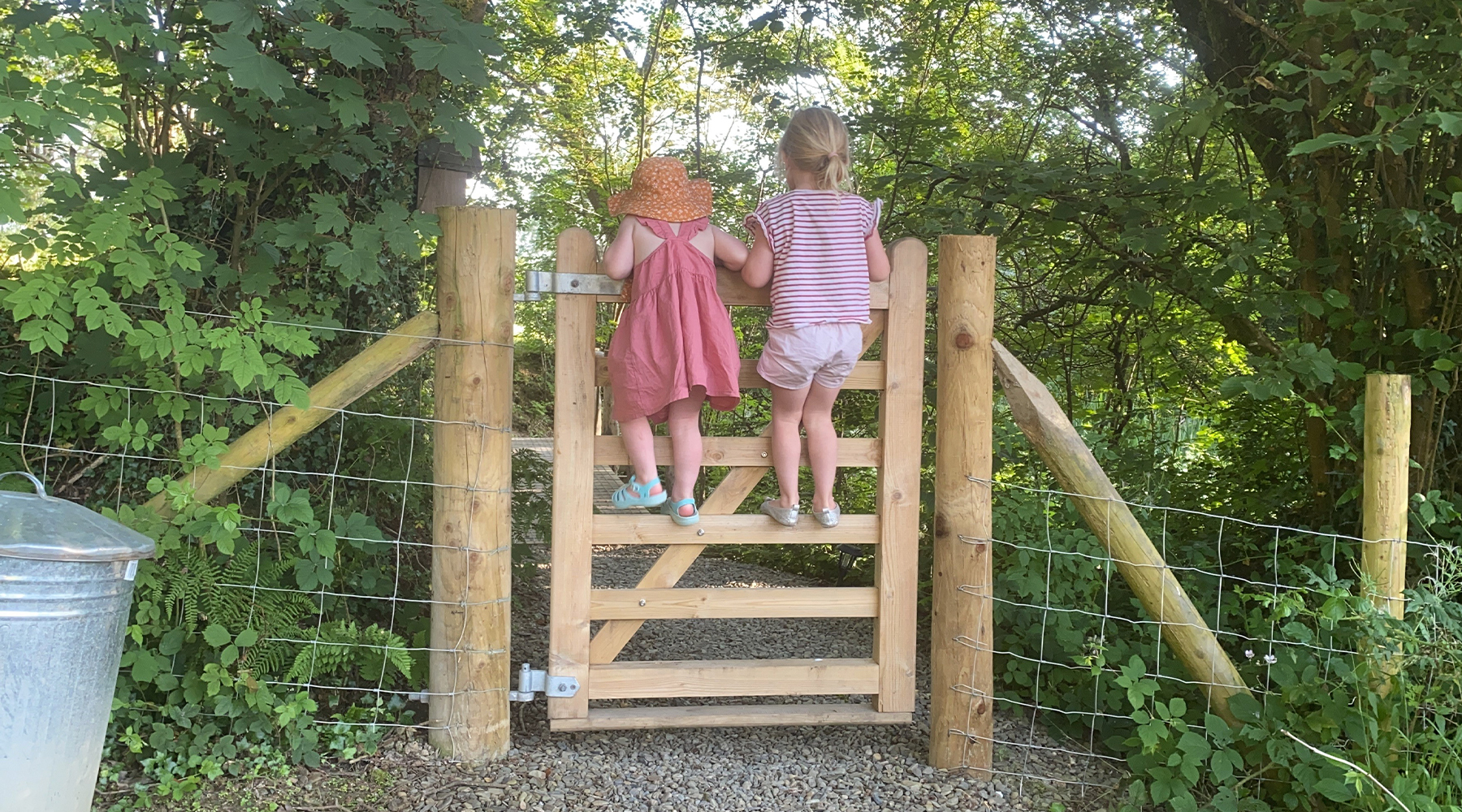 Another day, we went on the local Taifi Valley Railway, first on a very slow but fun carriage ride on the big train, then on the little pixie railway, which the children adored! Here’s a little sampler, with this week’s vlog! Go here on Facebook to see it. 🙂 Don’t forget to follow me on social media to see lots more little videos of my week behind-the-scenes. 🙂

Also on Facebook, the unusual #Thursdaybantz video I did from within the little shepherd’s hut at Lolly’s, with news of a way of joining me for a fun afternoon tea get-together for my bantz gang in Carshalton, Surrey, in August.

I’m looking forward to seeing the babies again soon. Including looking after Blake when her baby brother has been born at the end of August! 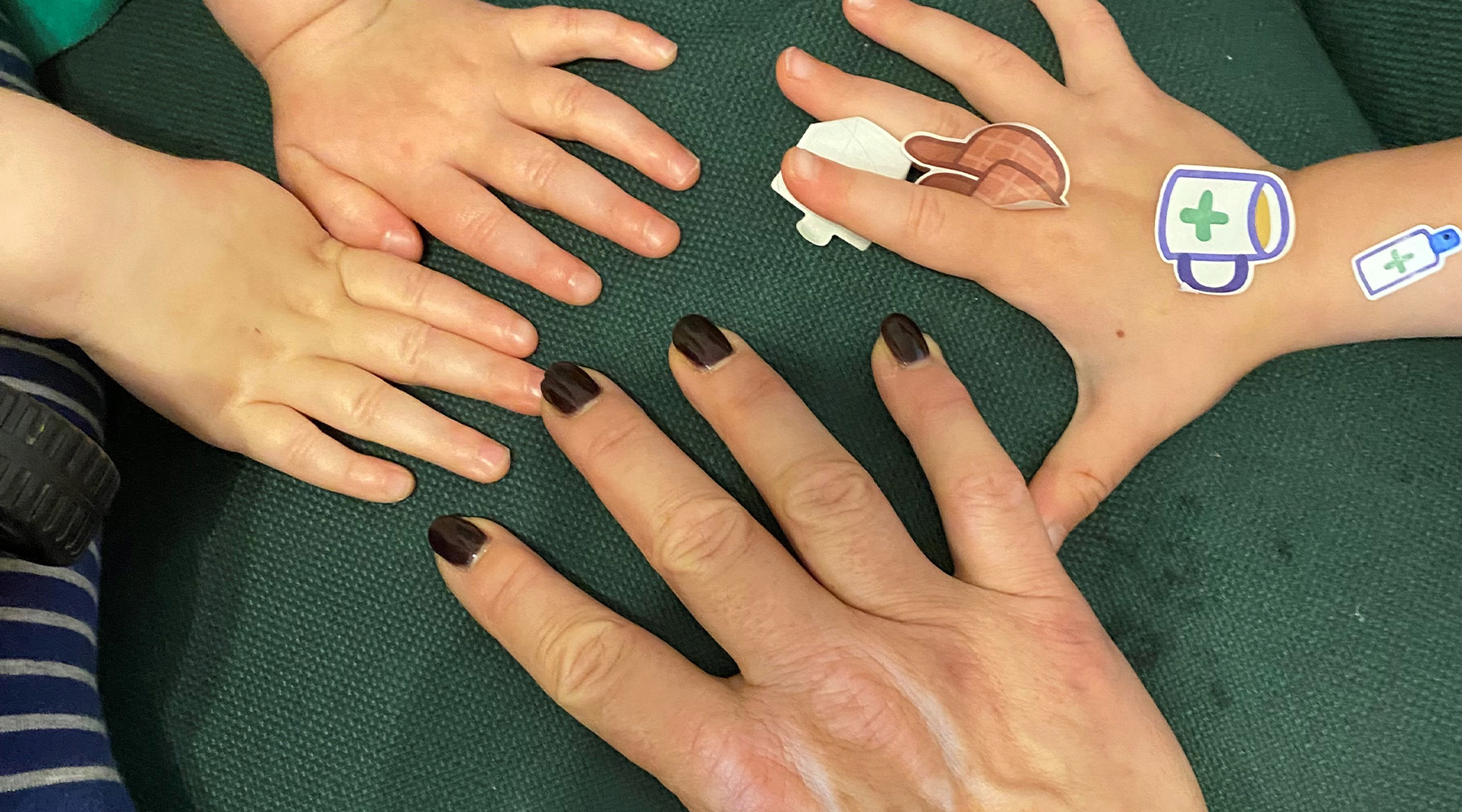 How cute to see Phoebe and Blake’s hands together. Blake is much taller than Phoebe, even though they’re only nine months apart, and has much bigger hands! Ironic, because her mum is only five foot tall, and Phoebe, the smaller one, who is quite small for her age, is so far not taking after her mum Lolly, who is five foot 10! Anyway, I thought I’d do a quick picture of all of our hands together. They had just been mucking about putting stickers on each other’s arms and faces ha ha. I’ll have to do this every year as they get older so we can see how they change or catch up or not! 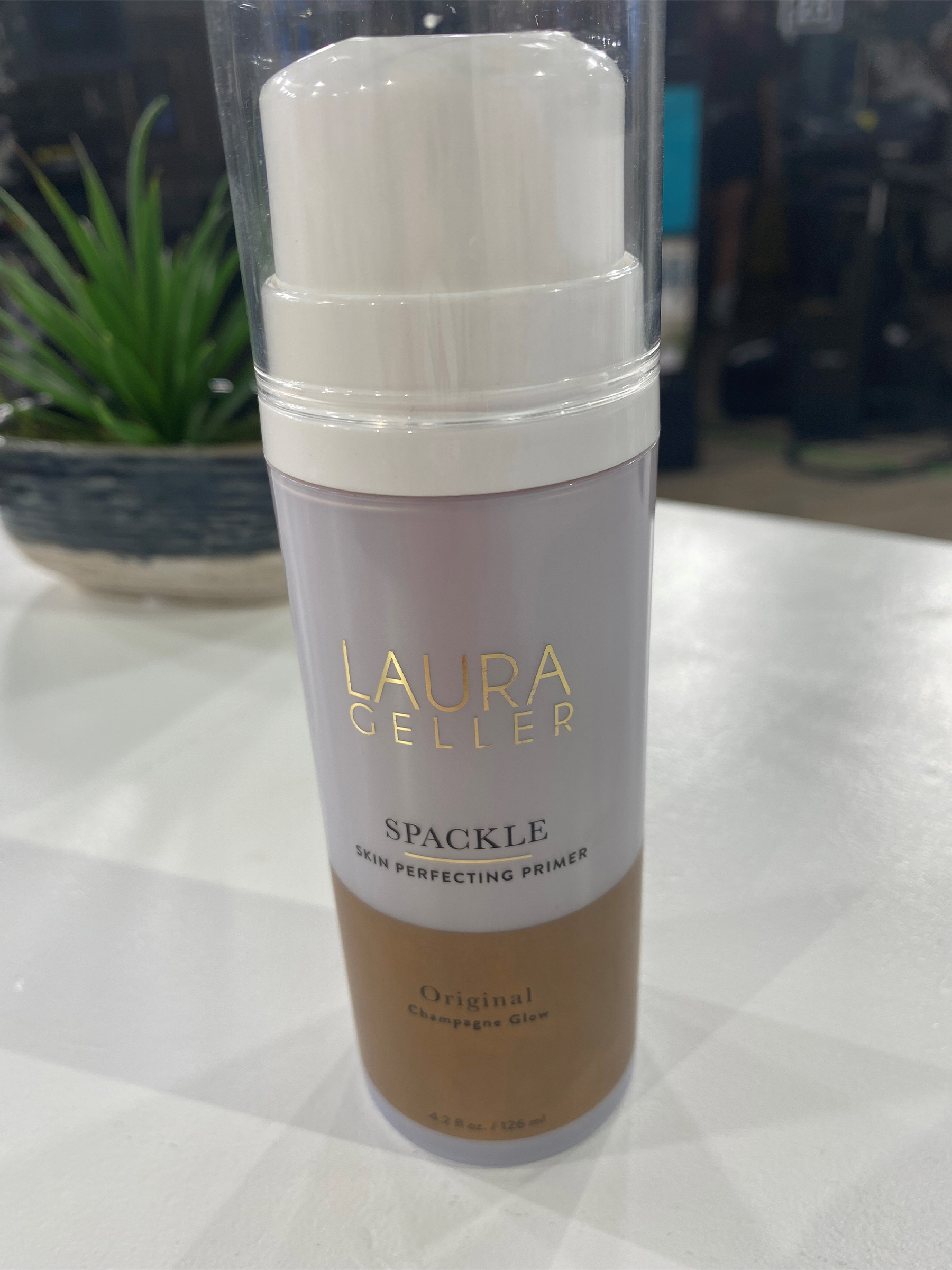 Very glad to see that this is the new supersize of the month for August, from Laura Geller. I almost always use one of her Spackle options before I put on my make-up before I go on air. I find it really makes it last and is extremely good at smoothing out the look of my skin. A supersize offer for the month of August, and with a three year shelf life it’s worth stocking up, given that half the size is usually £23. Get yours here. 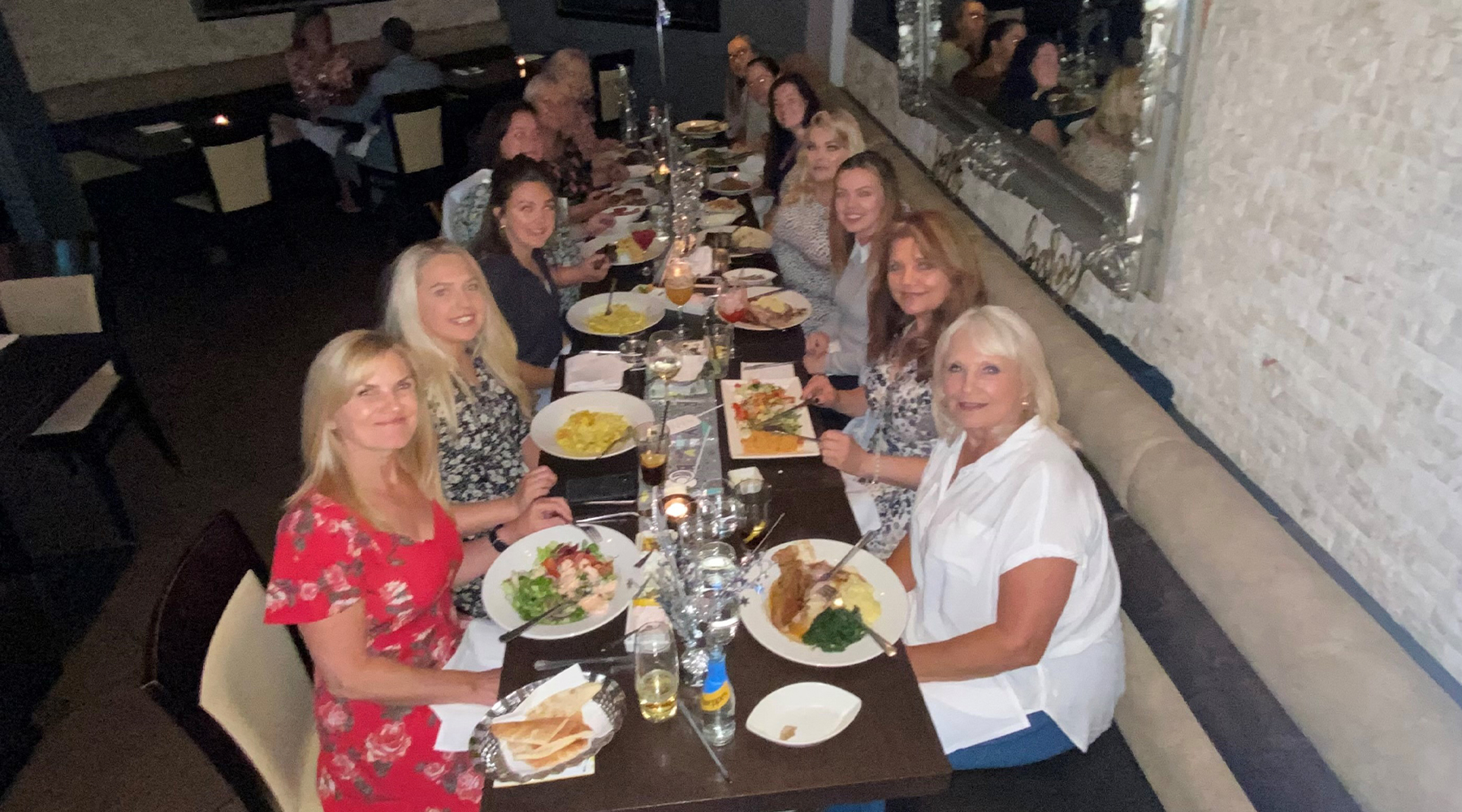 Another baby shower, another great grandchild for my lovely Mum, pictured here at the front on the right. Soon it will be my daughter’s turn! All very exciting. 🙂 Heather, my niece, is expecting her third. Mum commented that Heather’s last two may only have been 15 months apart, so they beat me and my sister at 18 months apart. However, Mum had her first three kids within three and a half years! Then another two. 🙂 I always thought I’d have more, but the time was never right and I’ve really enjoyed having a boy and a girl, seems quite perfect. Brad feels the same and won’t have any more, he says. 🙂

Saw Another Life, a movie on Prime, this week. Based on a true story set in Edwardian London, it’s the colourful and intensely moving account of Edith Thompson, a woman wrongly accused of the murder of her husband. It was a case that became a major scandal in its time. It’s a little bit dated, but a goodie as it features some famous faces, including Imelda Staunton and Tom Wilkinson! Since the book that I am writing is set in that period, this one suited me fine! I haven’t watched many movies lately, and I’ve really missed going to the cinema! Hopefully I can put that right over the next few weeks. Although maybe I can see some films when I’m looking after Blake at the end of August, when Brad and Kari go in to have their little boy, as she will be in hospital for a few days. So I will try to take her to the cinema. Blake is really good at concentrating on what she is watching, so loves movies. Unlike little Phoebe, who gets easily distracted but loves doing outdoor stuff! Lovely how they are so different.

Podcast – very excited to announce that on Monday two new faces will be interviewed by Will Gowing, so don’t miss it! Meet Ophelia and Annaliese, our two new presenters! So lovely to have some ladies with darker skin tones joining our team, well overdue I think. And Eilidh and I had a good old chat when they were in at the same time as us last week in the dressing room area. They are both really lovely. Ophelia made me smile, she said “my mum is really proud of me , she loves QVC!” Annaliese was loving the Onjenu dresses they were wearing. She said “I can cinch in my waist”. I said, “‘cinch’ and ‘waist’ are never in the same sentence where I’m concerned!” Lol. And Eilidh felt the same, ha ha. Do make them welcome. Ophelia debuts on Tuesday on Style and Annaliese the day after, also on Style. You can listen to all the podcasts here. 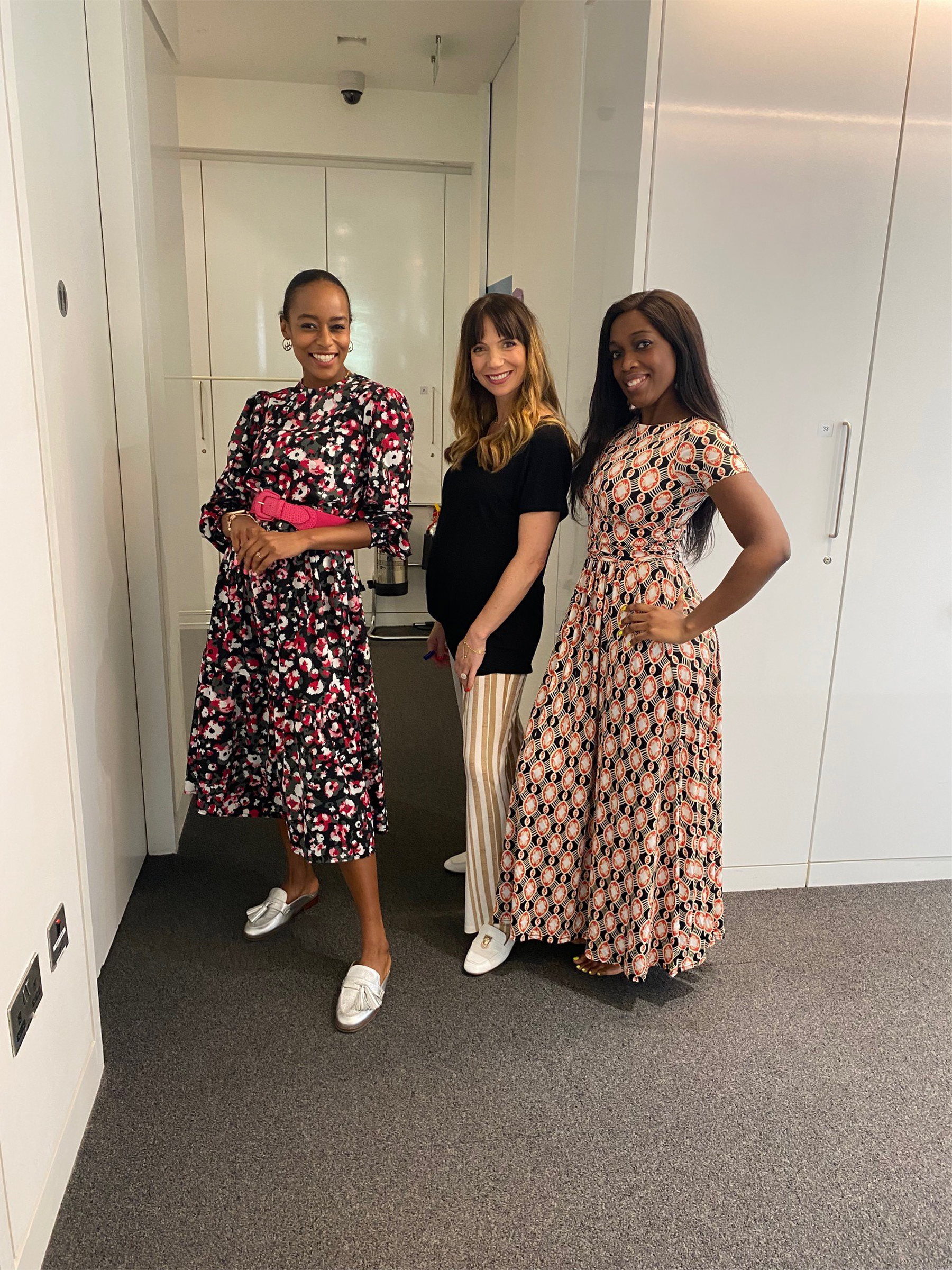 My latest audiobook download is a new mystery, the first from the Flora Steele series by Merryn Allingham.

“Sussex, 1955, Determined to save her beloved bookshop’s reputation and solve the baffling mystery, Flora enlists the help of handsome and brooding Jack Carrington: crime writer, recluse and her most reliable customer. Something strange is happening in the village, how the murderer is connected and who is hiding the biggest secret of all!”

Very much enjoying this cosy crime, for people who liked the Thursday Murder Club I think, Agatha Christie and Agatha Raisin. Give it a go if you want something gently entertaining and a great summer read.

Friday (today) – go here to see and buy what’s left of the Babyliss Curl Styler Luxe for a new, affordable way of styling your hair.

Saturday – Perricone bring us the five-piece Heroes collection. And I’m looking forward to launching the new gardening TSV at 9pm…

Sunday – … it’s the Yardforce 4 in 1 10.8 V multitool, I do hope it’s Tommy doing it, I just wonder whether he will be remote or in the studio/garden!

Now back to the today’s special values for the rest of the week:

Monday – mid-season sale day again, this time with the Tili rotating make-up brush with two heads, at a really low price. If you like the brush to do that hard work, try this one out to give you more of an airbrush look. Check out my social media to see it in action.

Tuesday – another Fitbit option for you, this time the Luxe Health and Fitness Tracker with added value featuring the premium app.

Wednesday – oh, lovely, Margaret Dabbs three-piece Supersize Hands, Feet and Legs collection. One of my must-have products. And not to be missed if you want to stock up. I use the Hygiene Cream every night, love the hand cream, and the legs lotion has such a cooling effect, great for whenever it’s boiling hot! 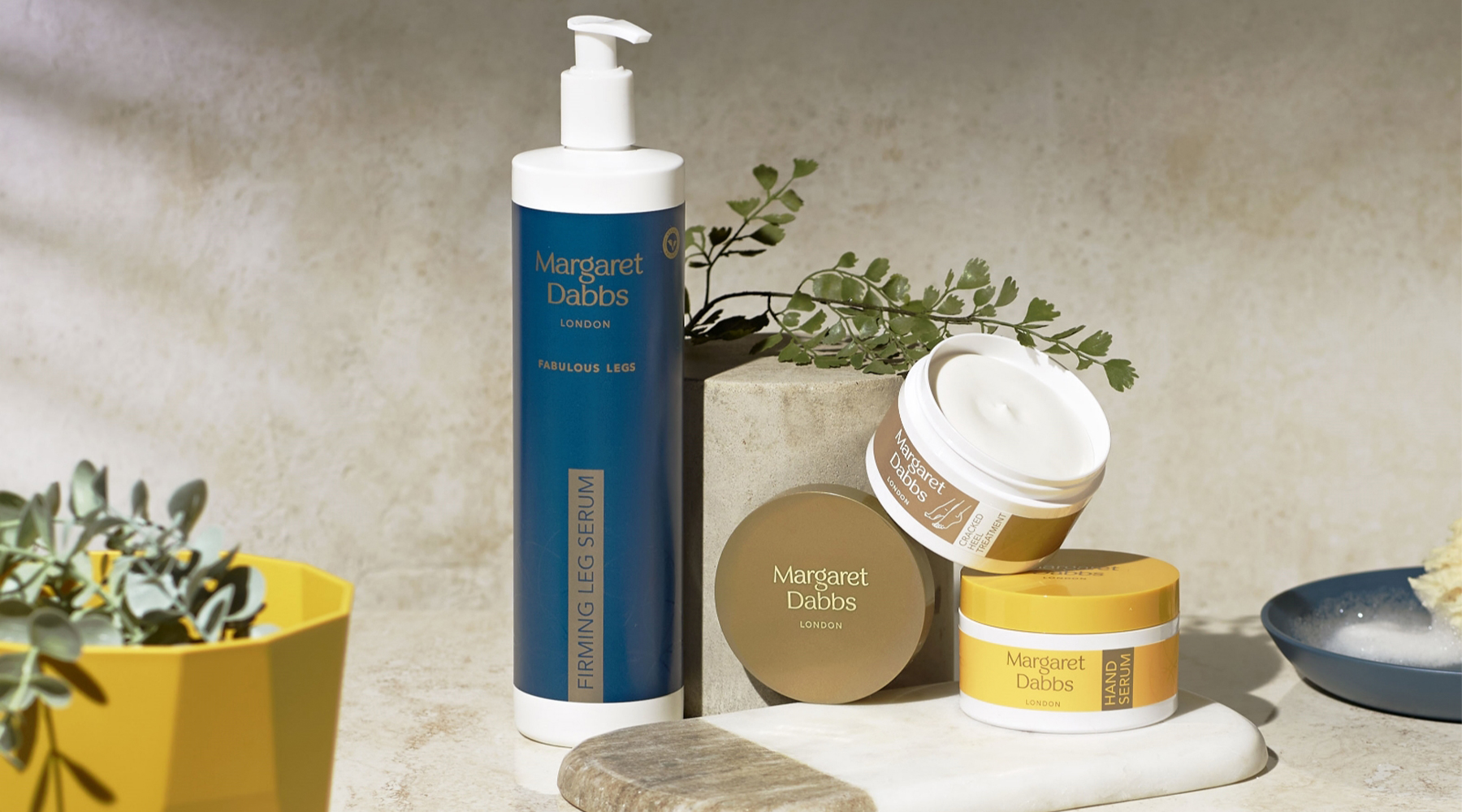 Thursday – time for the Denim & Co. marl knit zip-front hooded cardigan with pockets, which you may see me in this weekend!

Friday – definitely not to be missed – the Dyson AMO9 Hot and Cool fan, I swear by these and even took them away on holiday with me recently! Why get one from us? Well, you get the chance to try it for 60 days, and have Easy Pay instalments. I get a whole hour at 10pm.

Friday 9pm – and going on sale earlier in the week, the Ninja Health Grill and Air Fryer.

Next week – a lovely lunch as I catch up with some old friends in London and hear about their latest book successes!