Menu
Stories > Presenters > Kathy Tayler > My adventure in The Gambia

My adventure in The Gambia 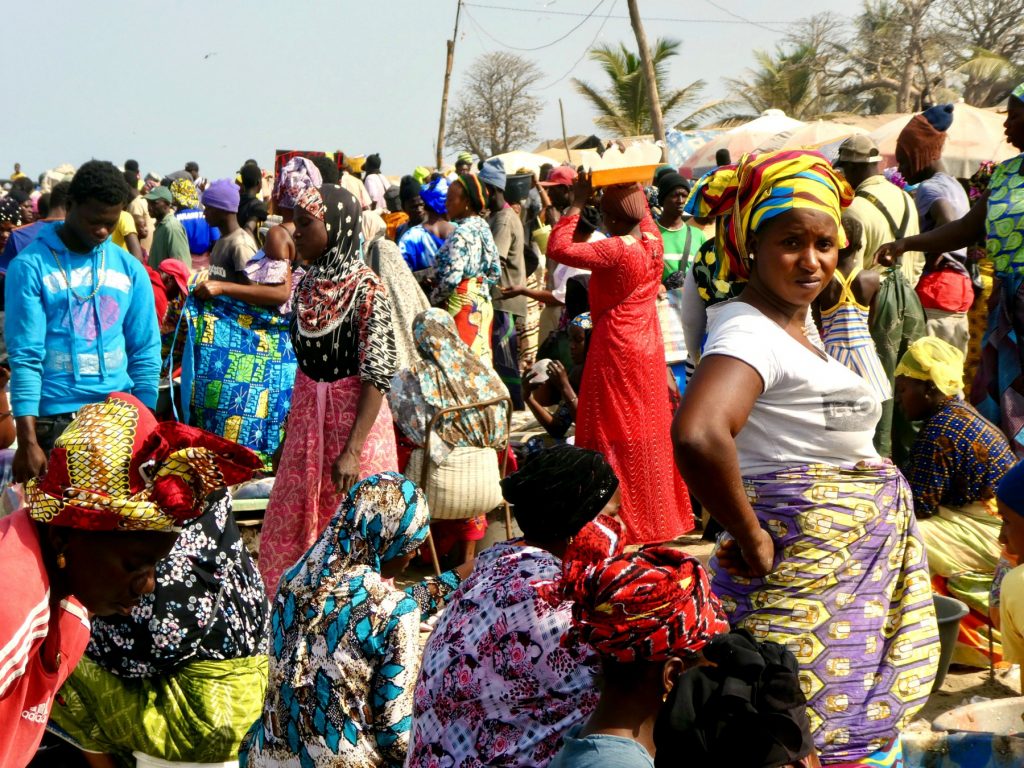 I’ve enjoyed a mixture of sunshine and culture in the last couple of weeks, with a day out in London visiting the Tutankhamen exhibition after spending a week in The Gambia.

I don’t know much about the history of ancient Egypt, so the Tutankhamen exhibition was enlightening and totally fascinating. The young Pharaoh died in BC1323 when the UK was in the middle of the Bronze Age.

The contents of the tomb, and the stories and ‘spells’ deciphered from the extensive hieroglyphics inscribed on various pieces in the tomb, indicate how advanced the Egyptian culture was. They help explain much of their beliefs about how the King would be reborn into eternal life after travelling through the darkness of the Netherworld.

The various weapons and tools, along with incredibly ornate, intricate pieces of jewellery and sculptures placed in the tomb with the mummified body of Tutankhamen, were there to aid him in some way on his arduous journey. 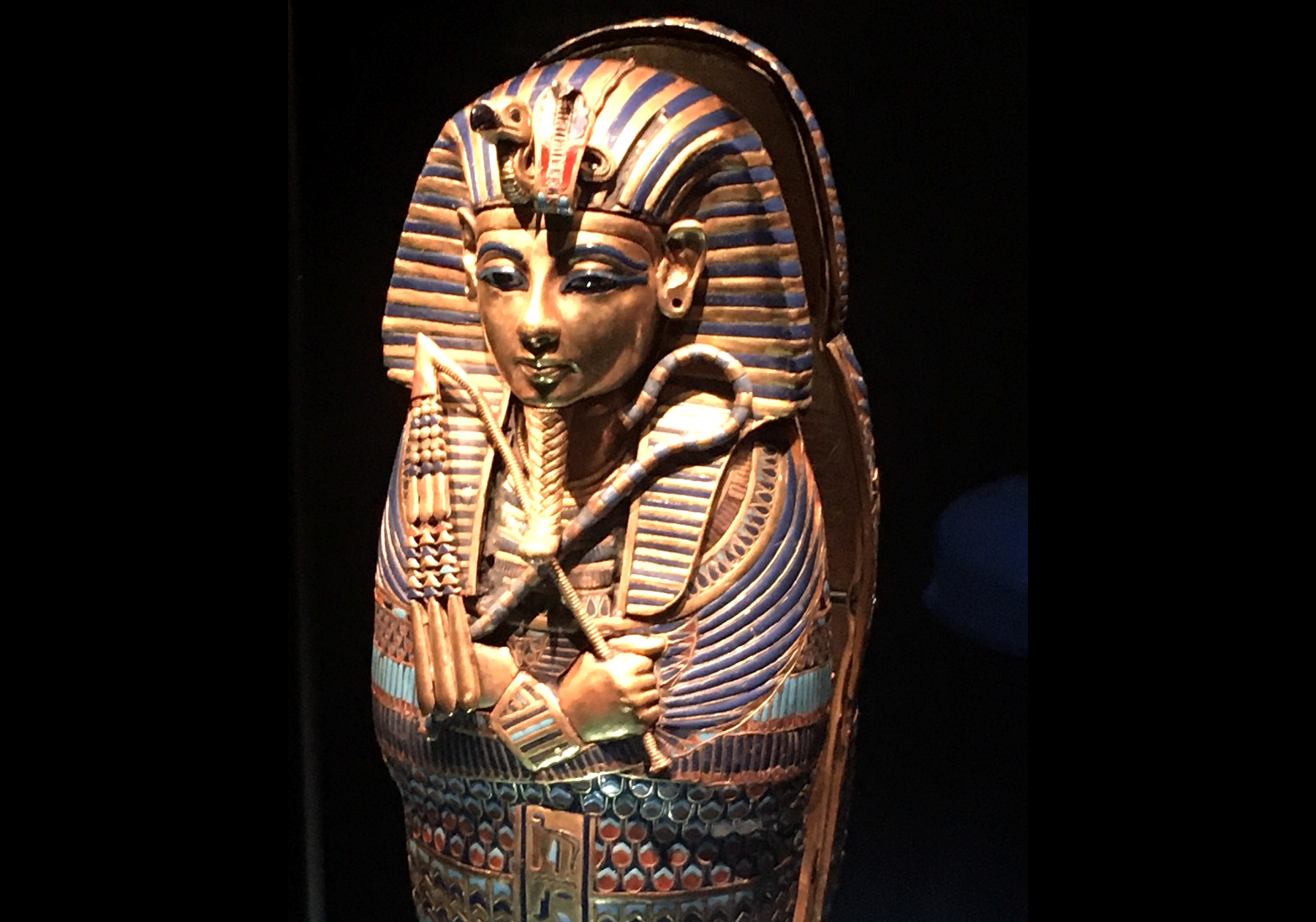 There were some beautiful exhibits – lots of gold – but also surprising ones. Who knew boomerangs don’t originate from Australia? Thinking about it, they were probably used in very early hunter/gatherer times, but they were definitely part of life in ancient Egypt.

Hunting birds was a popular pastime for the wealthy and they often used boomerangs by throwing them to stun the bird they were stalking. Boomerangs were likely included in the tomb to allow Tutankhamen to continue to enjoy the sport in the afterlife. As with most things in ancient Egypt, they also carried symbolic meaning, representing the dead Pharaoh’s ability to fight and subdue the chaos he would face in the Netherworld.

Symbolism was everywhere – gold was considered to be the flesh of gods, and Tutankhamen’s mummy was lavished with plenty of it to emphasise his elevation to a divine state – even his fingers and toes had engraved finger and toe ‘stalls’ to cover them.

The gold sandals were included because shoes were a mark of privilege. Only a high official was allowed to carry the king’s footwear, and if someone was dominated by another they were considered to be ‘under the sandals’, in contrast to the expression ‘under the thumb’ that we use now. 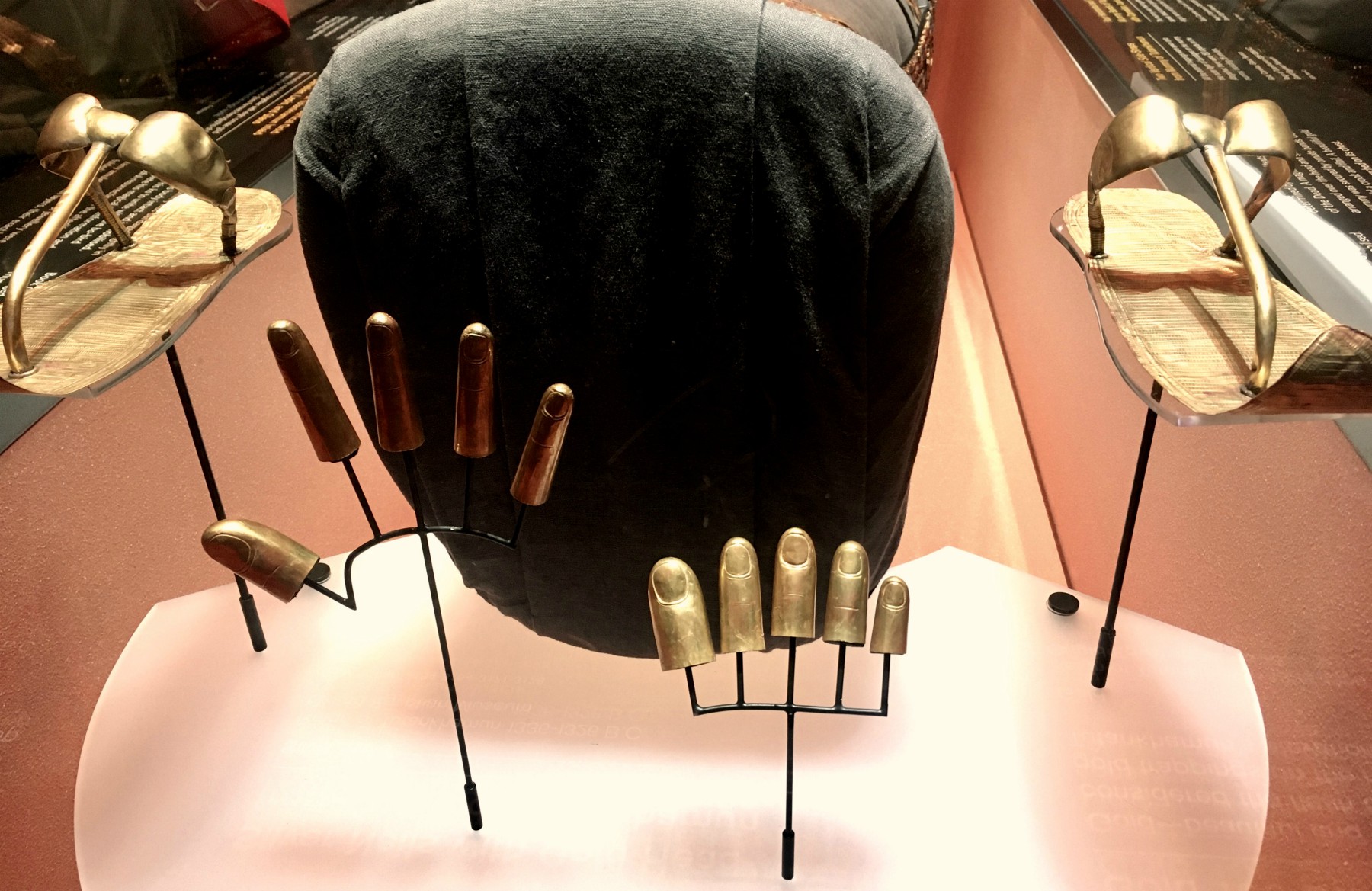 I’ve only touched on a tiny part of what there is so see and marvel at – if you have a chance to get there before it closes on 3rd May, I would totally recommend you do.

Our week in The Gambia was a holiday booked months ago but perfectly timed, as it gave me a chance to benefit from some much needed post-virus recovery, rest and relaxation.

With a six hour flight south resulting in no time change or jet lag, it’s the perfect destination when you only have a few days to spare. I’d packed a few books to enjoy but we also had a couple of days out and about exploring some of this small African country.

One of the highlights was a visit to the local fish market based on the beach where the fishermen land their catch every morning. Hundreds of colourful, traditional boats with thousands of people and millions of fish made the most amazing spectacle of almost biblical proportions! 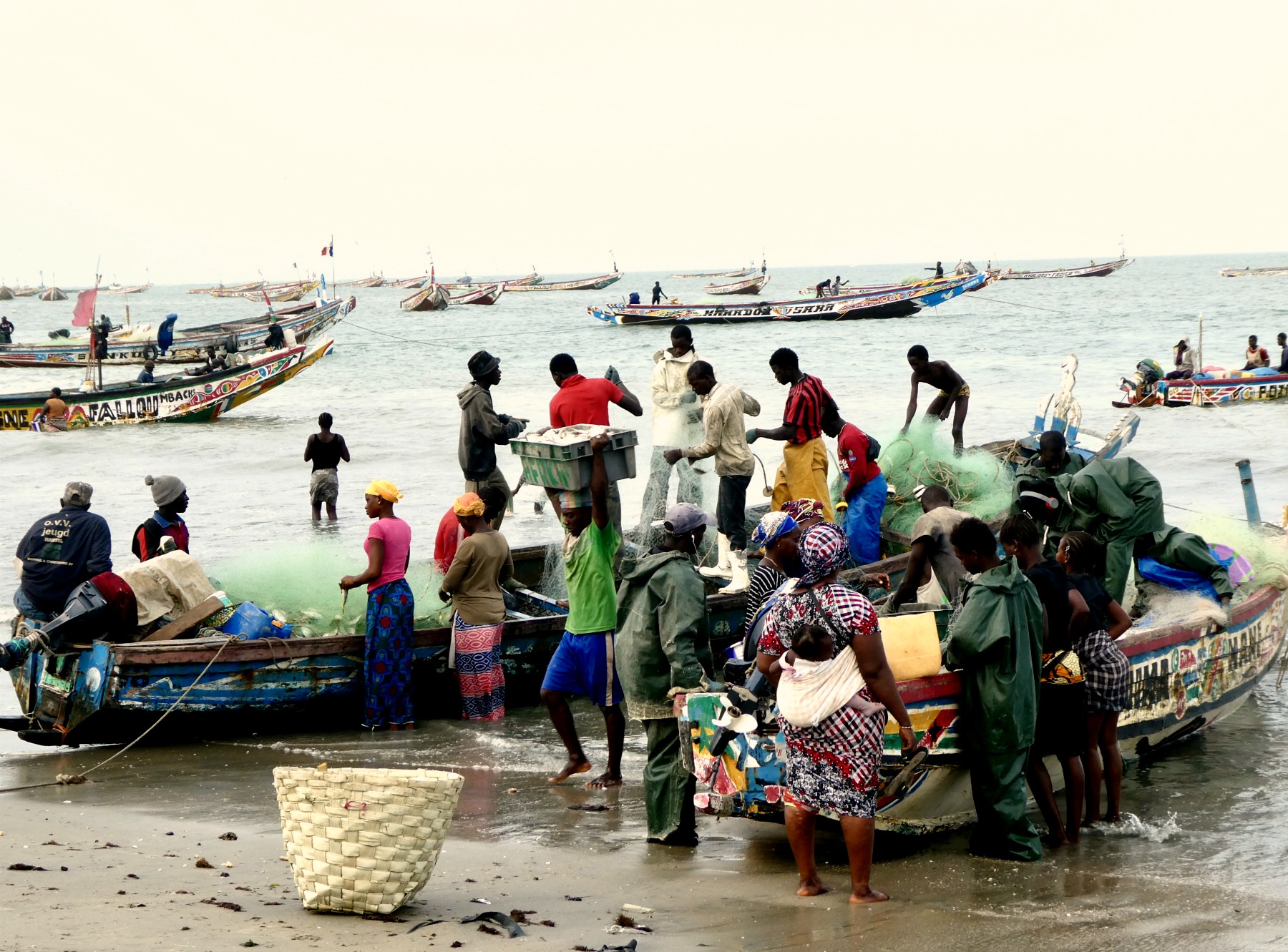 It was busy and at first glance chaotic, as there were so many people. However, it was actually well organised, with everyone knowing their own role in the process of catching, landing, smoking, salting and selling the fish. It was obviously a great social occasion, as well.

Colourful is a word to describe almost everything in The Gambia, as you’ll see from my photos. The women in particular take such care in their appearance, and look amazing in outfits made from beautiful fabrics.

Renting a couple of bikes gave us a much better feel of the place than driving would have done. The cars and roads are better left to the locals! We found a couple of craft markets packed full of wood carvings, gorgeous tie dye and batik fabrics and intricately woven baskets. We could watch the local artisans producing the goods in front of their own stalls, which makes it so much more meaningful to buy something. 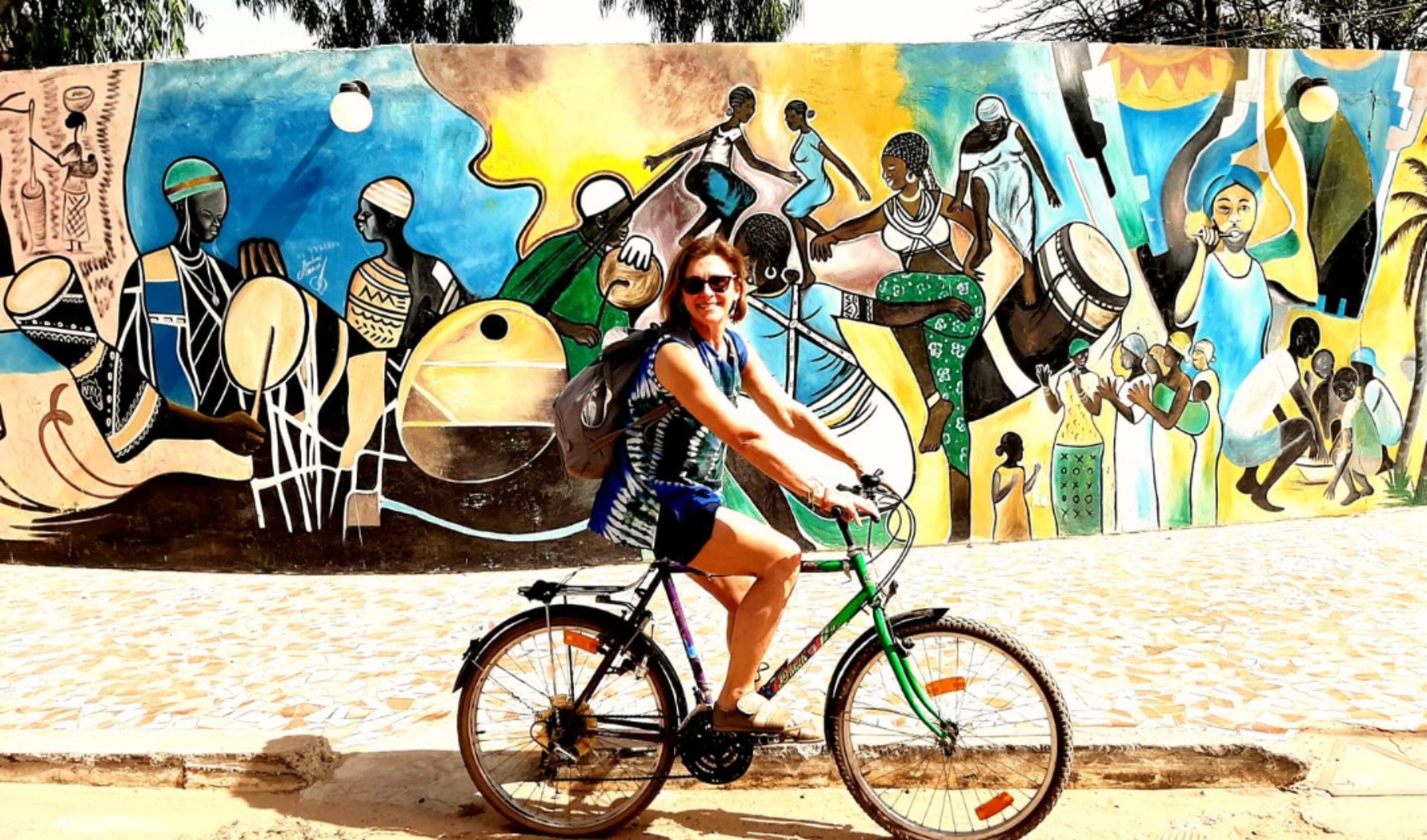 I chose a piece of fabric and asked if they could sew it into a top that as similar to one I was wearing. A few hours later, I collected a perfectly fitting bespoke piece of fashion made just for me!

Talking of fashion, we have something special coming up this week on QVC – the first ever Today’s Special Value from Perceptions, (183099). We launched the brand in May and it was hugely popular. The range mostly includes dresses that are cut in flattering shapes using fluid, easycare fabrics and at affordable prices (only one item in the entire range is over £50).

Today’s Special Value for Wednesday 11th at 9pm certainly won’t disappoint. It’s a pretty, sleeveless midi dress in five different prints for just £34.98. I’m wearing the periwinkle/white and there is also a choice of a leaf print in black/white, a floral in grey/white, a classic coral spot and an abstract print in blush/olive.

Please catch one of our airings to see the dress worn by our models – your first chance will be in the Spring Catwalk show at 9pm on Wednesday 11th with Jackie Kabler, followed by midnight, 10am and through the day on Thursday. 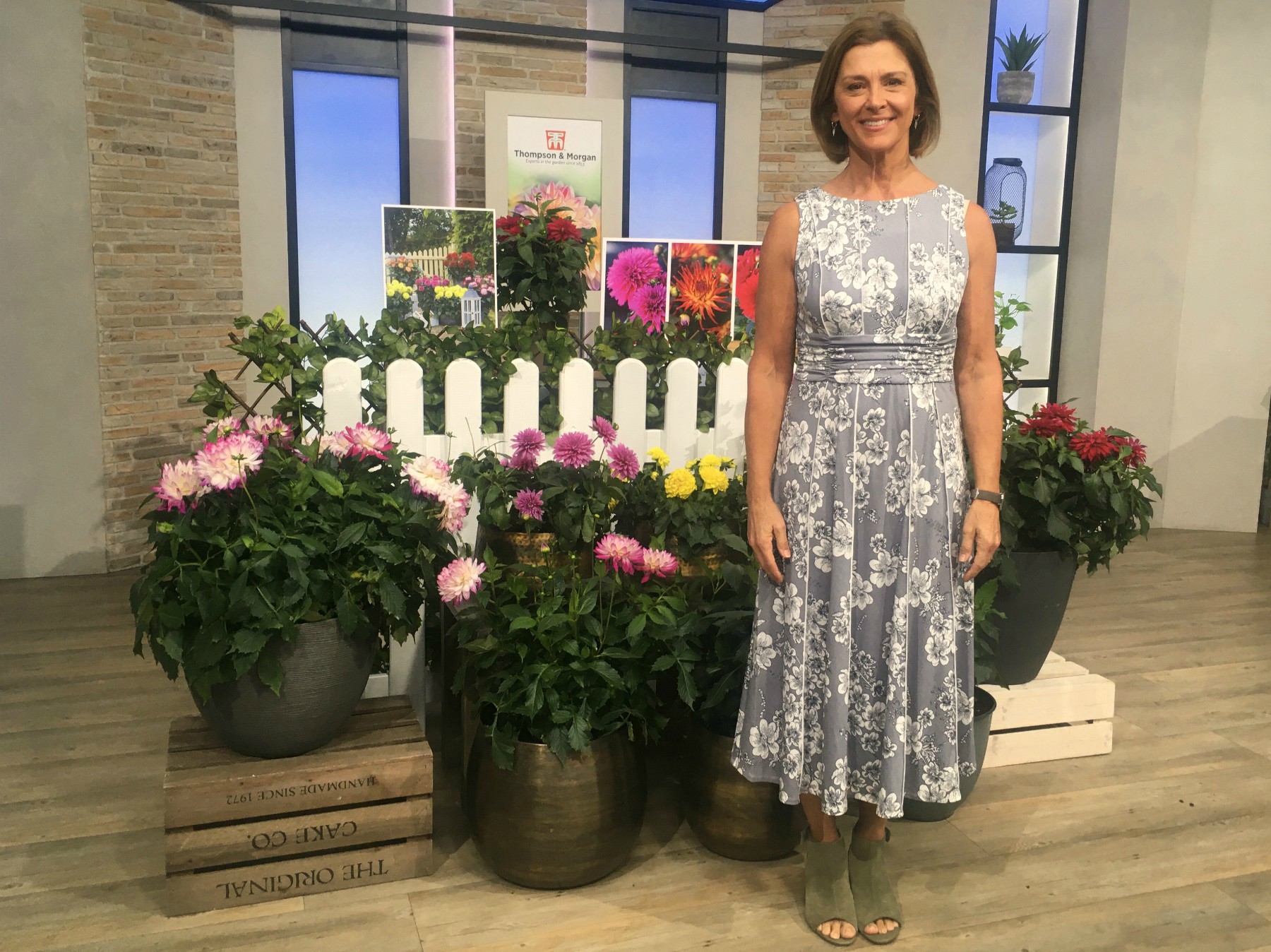 If you like the flowers that I’m standing in front of, do check out our gardening Pick of the Month. It’s a collection of ten dahlias by Thomson and Morgan specially selected for their sturdy stems and compact growth, which means they don’t need staking and don’t get too leggy.

They’re just covered in flowers, vibrant and gorgeous for an eye-catching display of summer colour! Even better, they will keep on flowering and getting bigger and better for year on year, and can be grown in pots or borders.

There’s over 30% off the price and no postage to pay if you order during March (providing we don’t run out of stock before the end of the month…), so definitely worth considering. I think I’m going to order two collections, so I receive four plants in each of the five cheerful colours – I’ll post photos when they’re at their best later this summer. Can’t wait!

All the best to you, take care