Shrek Adventure at Half Term and party sparkles 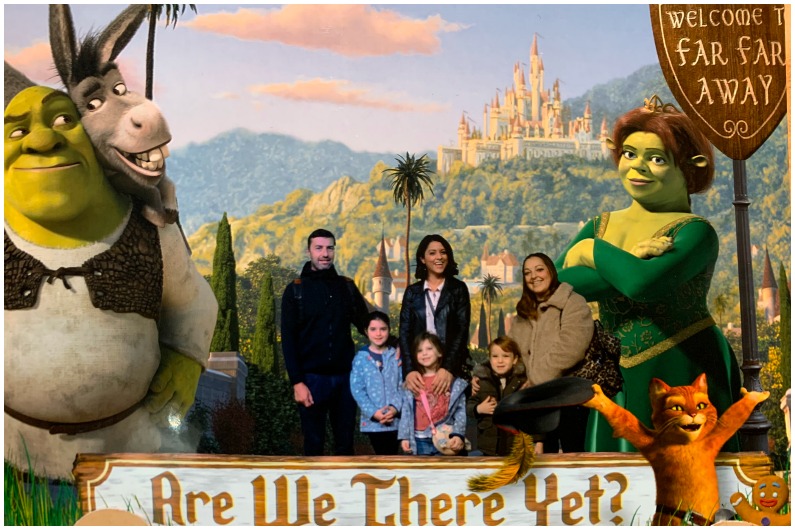 Hi there, I hope you have had a good week? We have been enjoying half term with the kids this week so I took the first half off to get to go and do some fun things with them. We headed into London on Monday as tourists for a change.

I am so used to rushing around London for work without going to see what’s in store for the millions of visitors so it was nice to see it with fresh eyes with the kids. We went in with my best friend Emma and her son Arlo who is my godson and booked tickets to see the Dreamworks Shrek Adventure. It’s on the Southbank so it was an easy trip straight to Waterloo. We got in early so had zero queues to contend with.

You start the adventure in a stationary bus but surrounded by 4D screens and you wear 4D glasses. You are immediately immersed into a world of characters flying around you which is really cool. Unfortunately it gets quite scary as it turns to witches and the bus ‘crashes’ into the woods and kills one of them. It happens to be Rumpelstiltskin’s girlfriend and he’s not happy! So begins an adventure through Shrek Land to get away from him by going from room to room to gain ingredients for a spell from live characters.

The problem was my girls took it all quite literally and no amount of telling them it was just make believe and actors would allay their fears. Both of them were in tears and wanted to leave. The problem was there was no obvious way to get out! We managed to finish the ‘adventure’ which I have to admit was really dark and understandably scary for some young kids. The last room is a dungeon where the benches you sit on move like there are rats underneath your bottom, and I myself let out a scream at that bit!!

Having seen the film a number of times we fully expected it to be fun and filled with music like the film. Other kids seemed pretty happy but having posted about it on social media I have had a lot of messages from people saying they had the same problem and had kids in tears. Once we got out of the adventure part and were with all the character models the girls were happy again and actually said they did enjoy it, which is typical! After that we headed to a theme restaurant and the kids were all happy back in the real world!!

With full tummies we hit the streets of London and walked to Trafalgar Square as Tilda and Ivy wanted to see the lions. We told them about Nelson’s Column and got pictures of them with one of the lions, although Ivy was hoping that they would ‘wake up’ to be fed!

I knew it was a long shot that it would peak their interest but I wanted them to see the National Gallery so we popped in for a quick look round but as you can see from the picture it may have been a bit premature of me to try and interest them in the paintings!! It’s one of my favourite pictures from the day though as it makes me laugh, I fully remember that feeling of being dragged to museums as a kid.

What I’ve been wearing

The cold weather is definitely upon us so I thought I would share a few of the jumpers I’ve been wearing. Perfect for autumn/winter walks and cosy nights in. Firstly, I’ve been wearing this jumper loads, on air and off. In fact I’m wearing it as I write this blog! It’s from our range of Monsoon and it’s a different take on animal print. A little more abstract due to the colours. I love the soft turtle neck on this as it gives extra warmth without feeling claustrophobic!

The second jumper was my pick from the Absolutely Famous hour we had on air on Thursday. It’s another animal print but more snow leopard. This features a cowl neck which again isn’t tight on the neck. This whole range is such great value as it ranges from £20-£40!

At the beginning of last week I got to go to a really fabulous party at the Grosvenor in London. It was one of my mum’s long term friends 80th Birthday Parties and a black tie event. It was a wonderful sit down dinner with entertainment, including ballroom dancers accompanied by the Royal Philharmonic Orchestra which was a privilege to get to see in person. Fred sadly had to sit this one out because of timings and the kids finishing school and us living so far from London, which was a shame but it was a rare opportunity to get to have a night out with my parents and my sister.

Working at QVC I was very fortunate to be able to ask the jewellery department if I could borrow some sparkle for the event. They let me have my pick of some gorgeous Butler & Wilson pieces that we have in stock at the moment. I chose a beautiful hair clip which was a nice way to add some sparkle to my hair which I clipped up on one side.

On my hand I wore a crystal rose ring with black enamel to match my black lace dress, but the icing on the cake had to be the stunning Art Deco crystal collar necklace with a silver tone base to it. It is incredibly elegant and also quite unusual with the cut and lay out of the stones. I felt fabulous as anyone wearing Butler & Wilson should. They are perfect party pieces so if you have any parties to go to this festive season do check out all the Butler & Wilson range.

Today over on the QVC Beauty Instagram Page I will be doing a takeover on the Insta Stories sharing how I do my party make-up. I wanted to show in particular how I do a really quick turnaround if I am in a rush. So often if we are going out I have ten minutes to get ready in between putting the kids to bed and the babysitter arriving and the taxi! Sometimes I have to just top up the make-up I am already wearing. So do pop on over there and make sure you are following the page so that you can see the videos.

The beauty items I used were –

I also wore a couple of really great party pieces to change into quickly. Firstly the black camisole from Gok Wan, I wear the 12 but if you are bigger busted you will need to go up a size as I found it quite snug on the chest. I teamed it with the Ben de Lisi Edge to Edge Sequin Jacket which is the perfect piece to throw on at the last minute.

That’s it from me this week, next week I will be bringing you more of our fabulous skincare offers for Christmas including Elemis.

Hope you all have a fab week