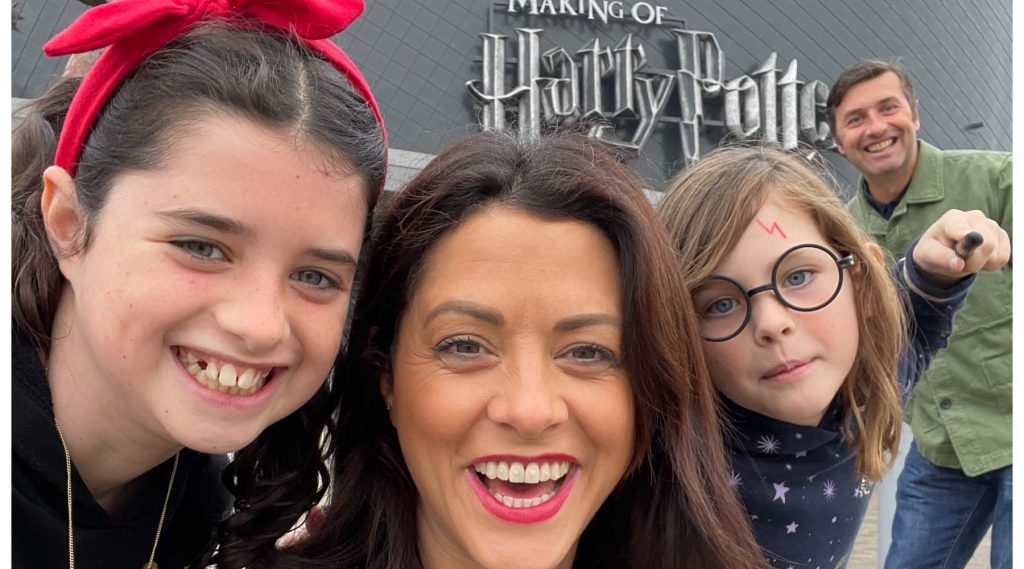 I am writing this after finally saying goodbye to the last of 10 nine-year-old girls who we’ve had over for Tilda’s Birthday party and the house has never seemed so quiet! I had forgotten how much girls of that age scream for no reason. They had a blast though, it’s great fun seeing them all together playing and laughing and dancing to music. They all know every word to Spice Girls Wannabe which is very amusing seeing as I was dancing to that the first time around at our school dances.

As part of Tilda’s Birthday celebrations, we had an amazing day out at the Warner Brothers Harry Potter Studio tour. It had been a long time coming as this was a lovely family gift from my mother-in-law from last Christmas but due to obvious reasons, we had not been able to go until now. So, it was perfect to combine this trip as part of a few days of fun.

We arrived at the studios bright and early on Sunday morning and instantly the excitement was bursting from all of us, the mere sight of the gigantic Harry Potter sign over the entrance was enough to have us all squealing! From the moment we walked through into the main foyer to be greeted by an enormous dragon we were blown away.

The attention to detail, the design of the whole place even down to the Harry Potter themed cakes in the cafes was incredible. The staff are some of the best theme venue staff I’ve ever come across, all clearly huge fans of HP and are so eager to help and make sure you have a great time.

You start with a briefing from one of the team followed by a short film in the cinema room where the stars of the movies explain what we are about to see and experience. After that, the cinema screen lifts away and reveals the enormous door that opens into the famous great hall. It’s a real wow moment, the first of many! The great hall was themed for Halloween with pumpkins hanging from the ceiling and the current additional theme to the season was the ‘Death Eaters’ so we were faced with actors throughout who would come out and perform their dark magic. 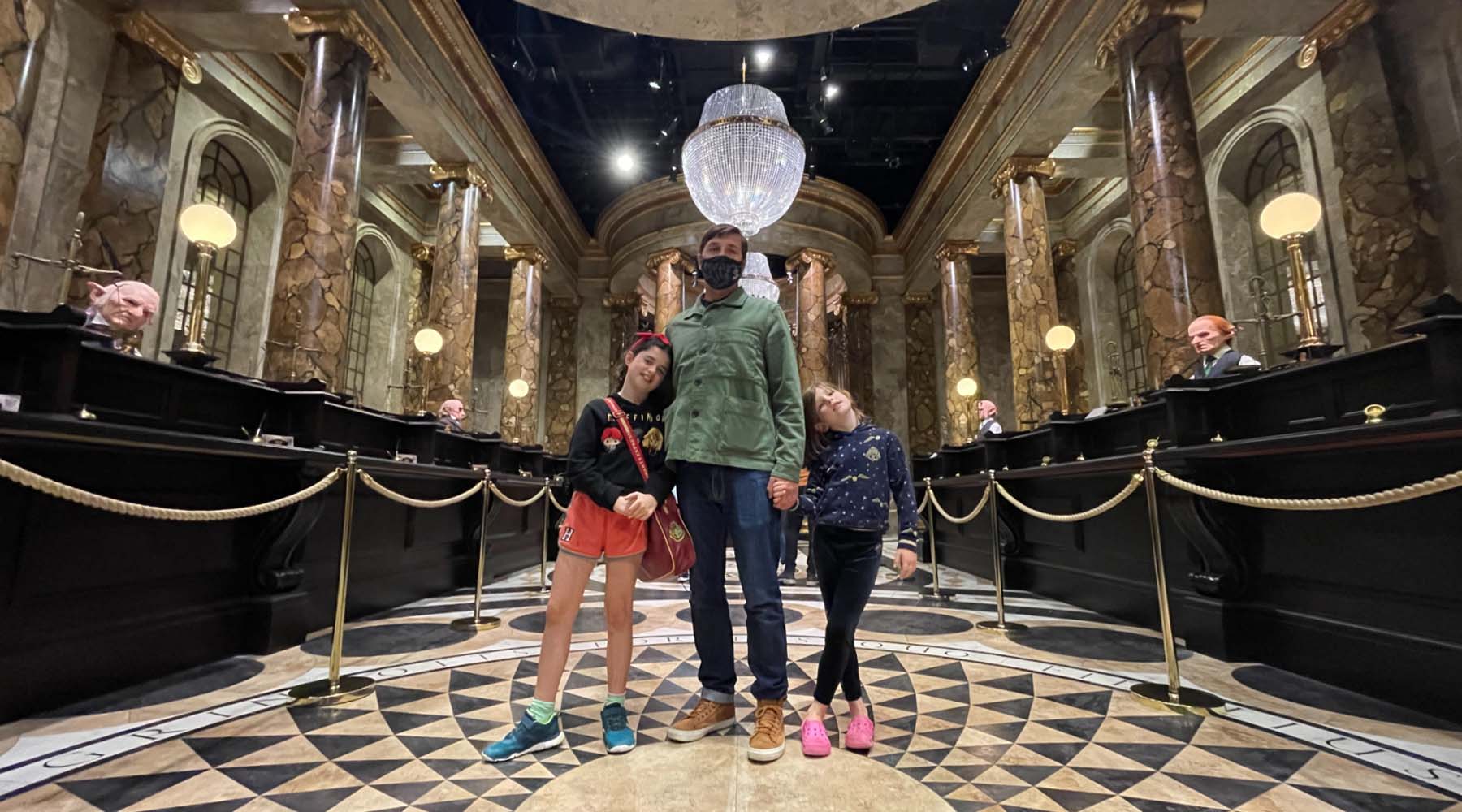 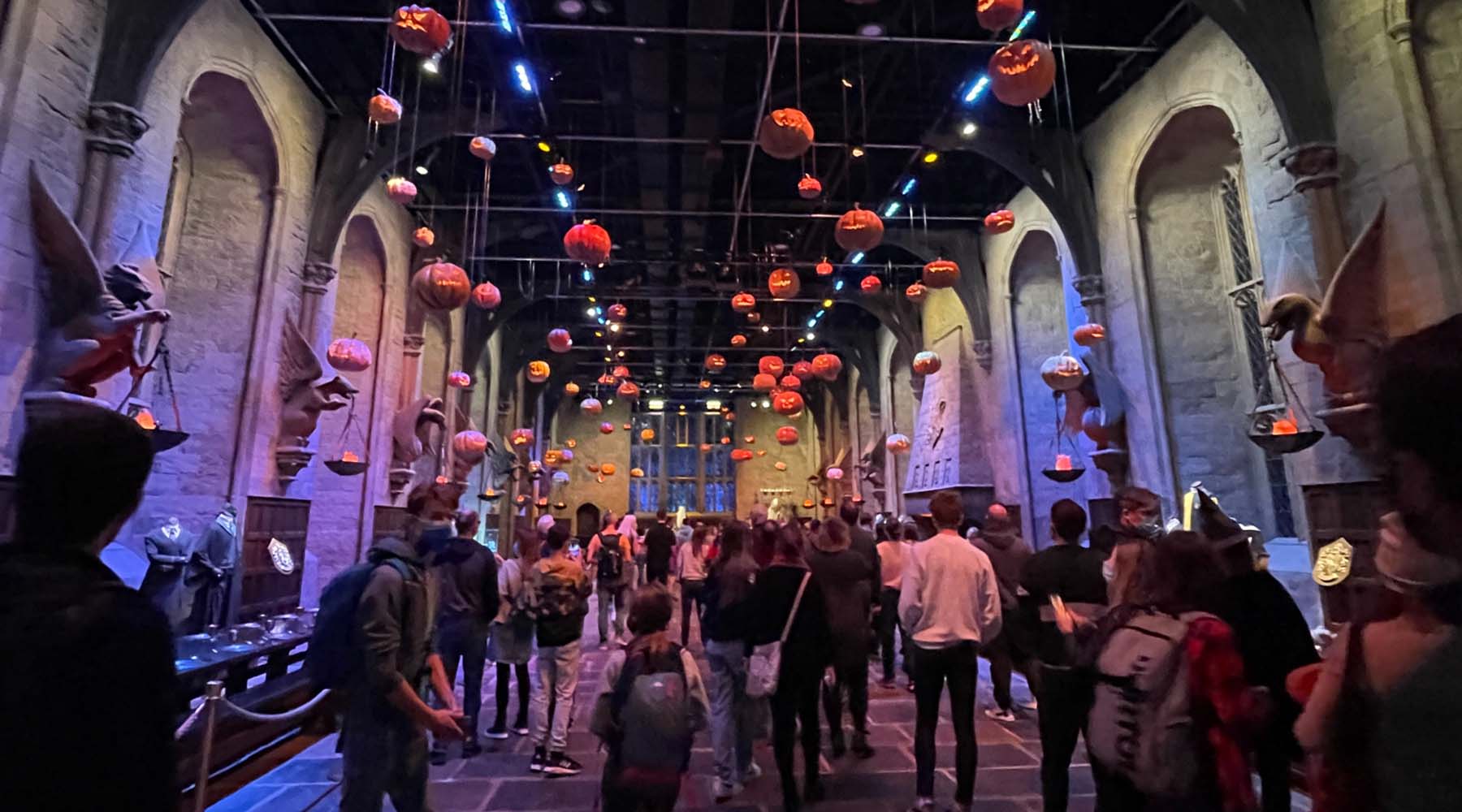 I just loved all the individual sets of everything from the Griffindor dorm room to Dumbledore’s office, Hagrid’s hut, Snape’s potion room, the Weasley’s burrow and so much more. The set details blow your mind and you see up close why the movies are so special, because they really made it all seem so real. You can see all the costumes and wigs worn by all the actors which are wonderful.

We also got the chance to have green screen pictures taken of the kids on broomsticks and a ‘Wanted Dangerous Wizards’ picture taken of all of us which was a great keepsake. ( a warning though, this is where you can end up spending a fortune!).

Next, we ventured through the Forbidden Forest which was filled with dry ice and is incredibly eerie. The giant mechanical spiders do make you step back a moment, that’s for sure. Next onto the Hogwarts express and a chance to take your picture with the famous trollies being pushed through the wall at platform nine and three quarters. 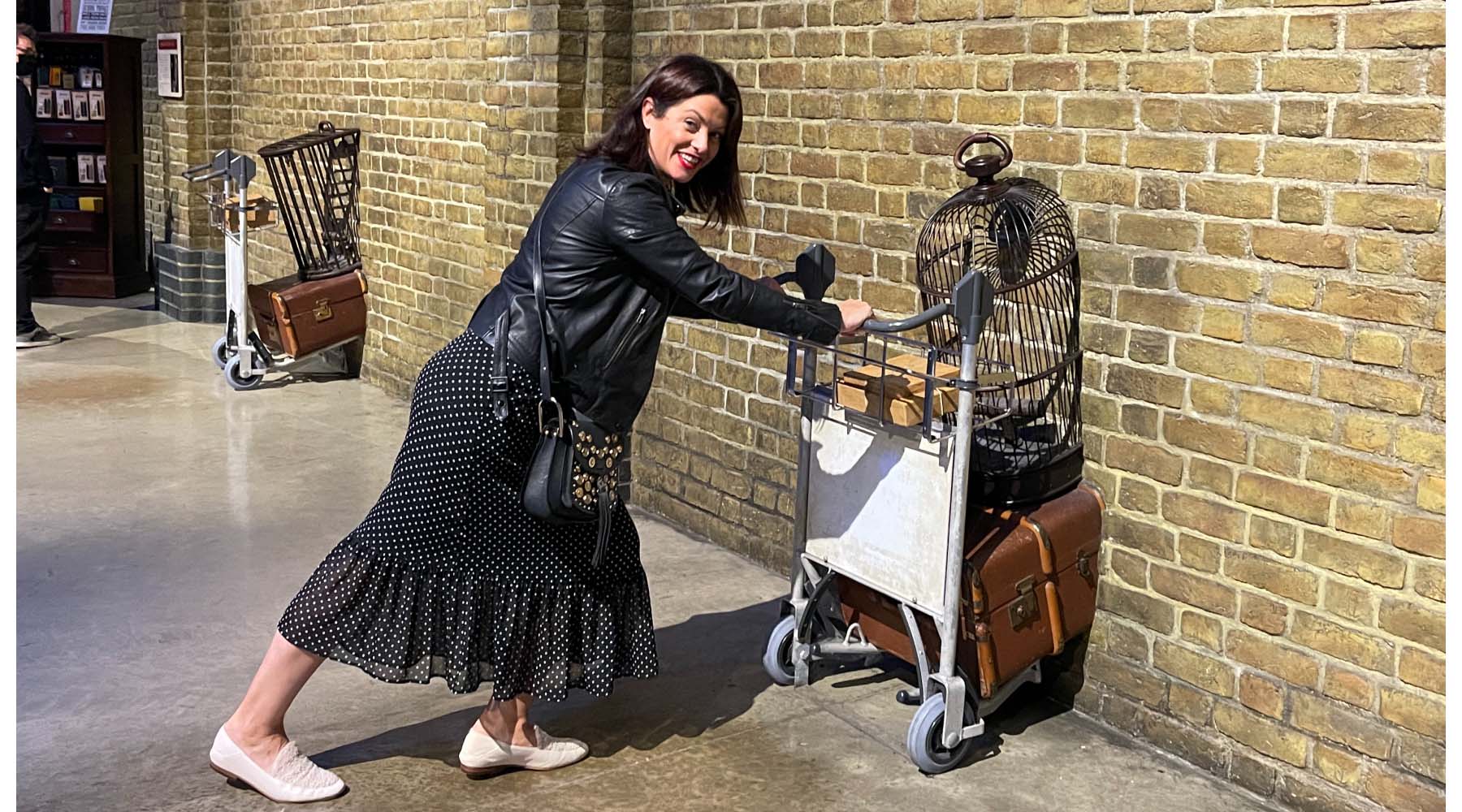 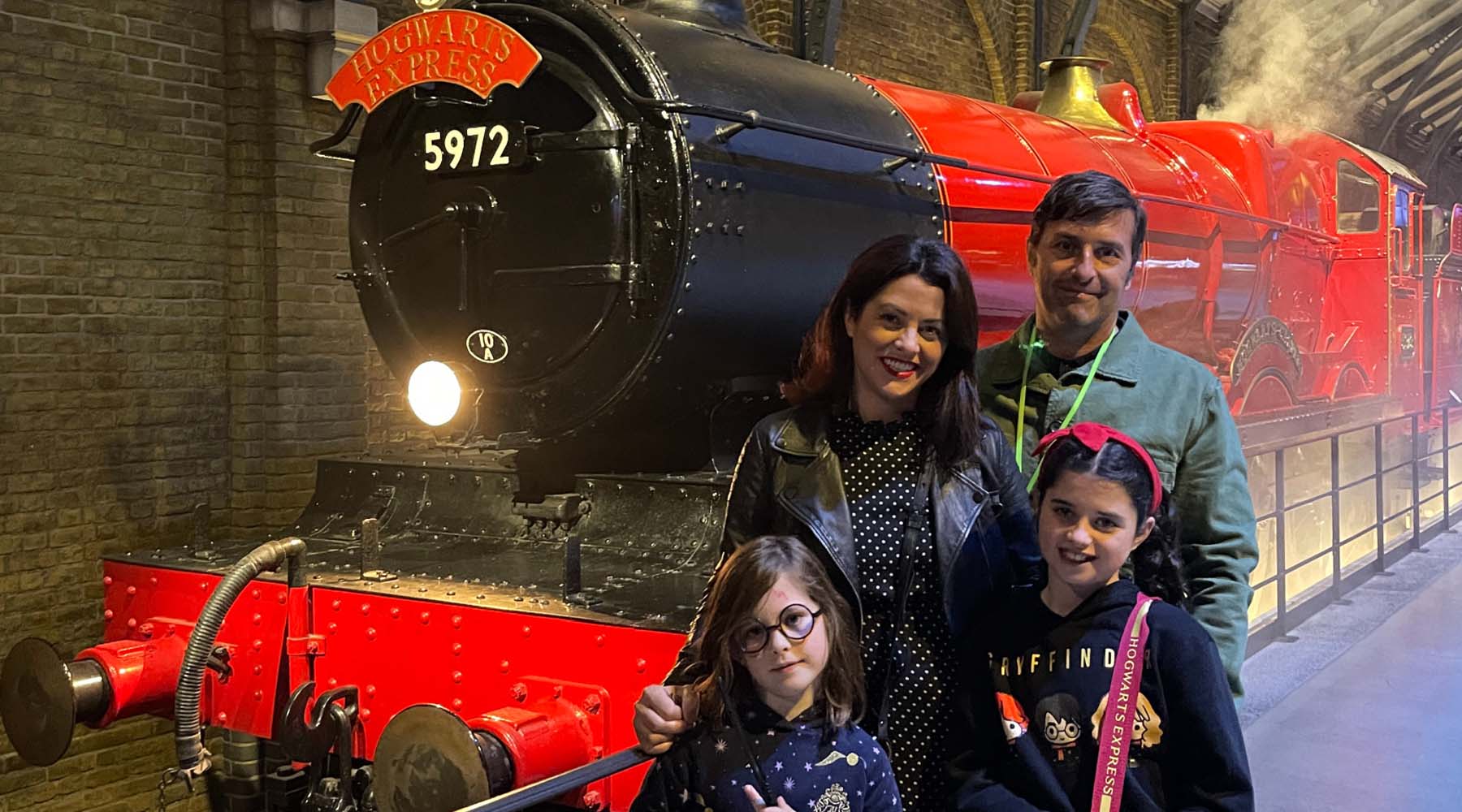 We stopped for lunch half way round the tour at the ‘Back Lot Cafe’ and I’ll admit this was the only bit that didn’t get a 10/10. The queue was PAINFULLY long! It went out the room at one point and with so many little kids waiting with tired legs and hungry tummies you can imagine it’s a bit stressful for families.

You also end up spending a fortune here too although the quality of the food was pretty good so I can’t complain about that. We did get a tankard of ‘Butterbeer’ to try too, which we knew from advice from others to just get one as we probably wouldn’t finish it as it’s sickly sweet, but it’s part of the fun so you have to try it! The advice was correct, we each had a sip and that was it. You get to keep the tankard though. 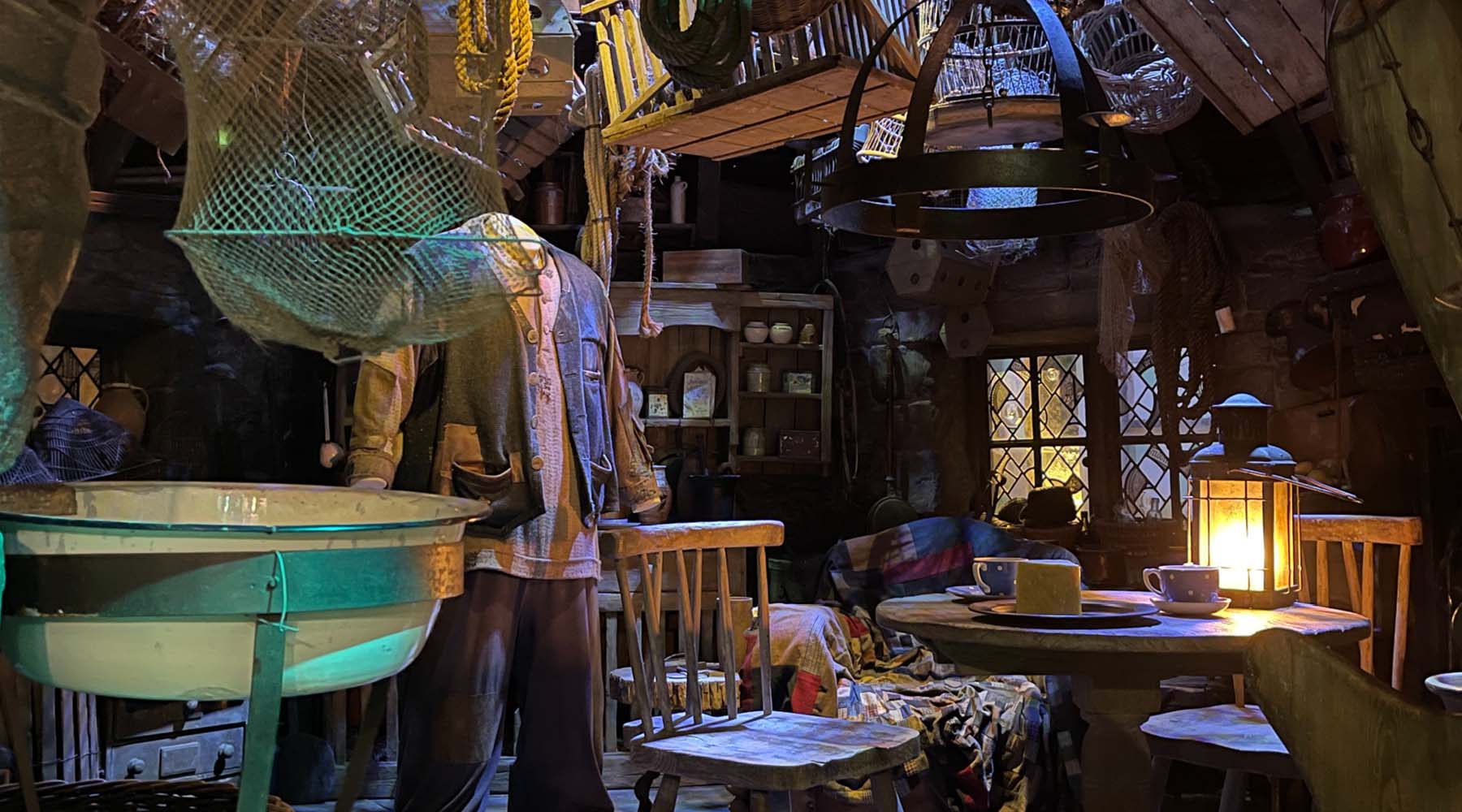 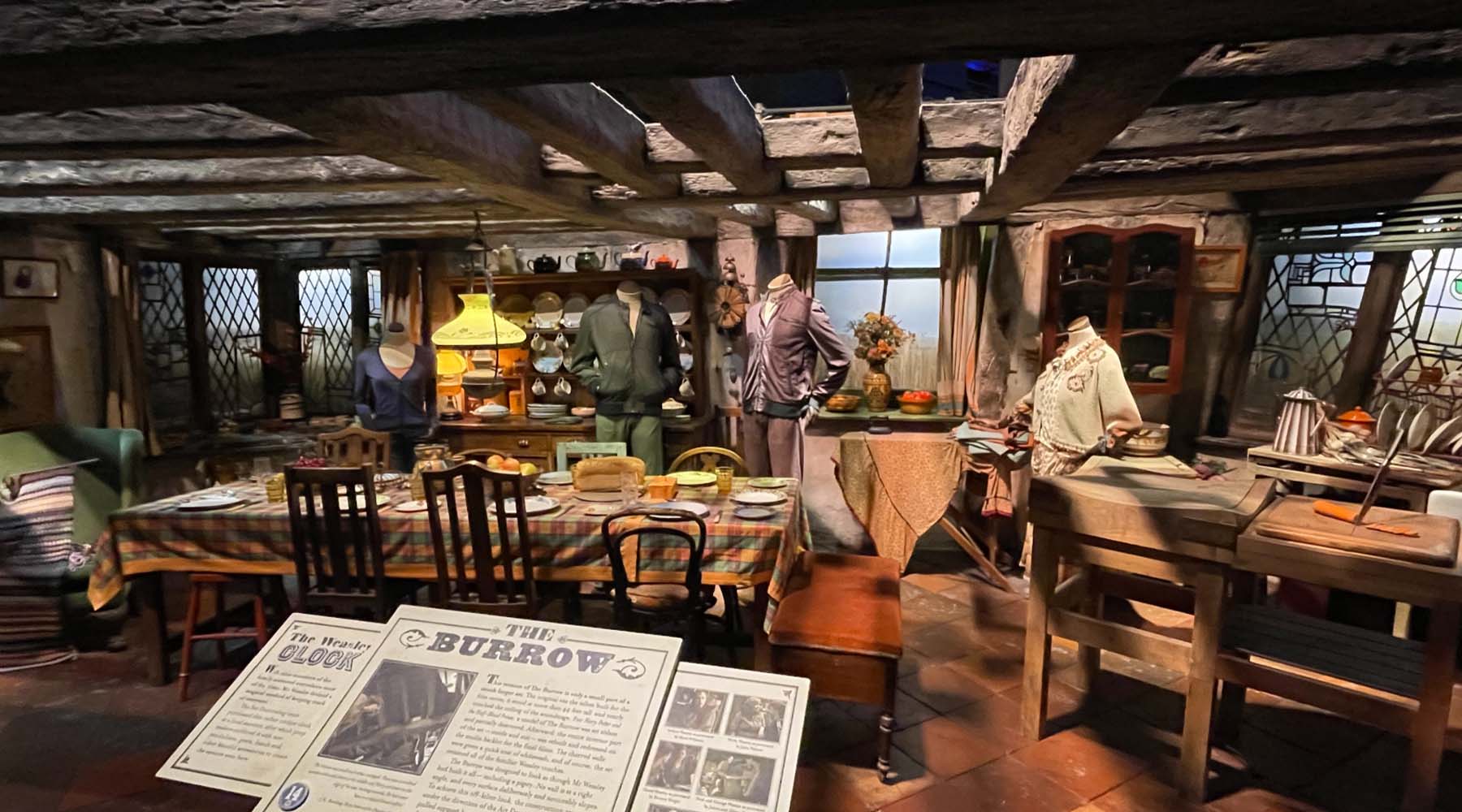 After that, we stopped to see the Dursely’s House at Privet Drive, along with the Night Bus and the open-air bridge that would lead you into Hogwarts. You can take pictures on Hagrid’s motorbike and the infamous Ford Anglia here too. After that we were wowed by the making of all the prosthetics and make-up of the goblins and giants and creatures and after that were completely dazzled by Gringotts Bank. It seems so real you forget you are on a set. Some of the bank teller positions are even taken up by the most realistic of goblins!

There are so many wonderful parts to the tour and I could go on and on, Diagon Alley, the ruin with the fire-breathing dragon, the breath-taking giant model of Hogwarts. It’s truly magical from beginning to end, even the gift shop is incredibly special. I’m actually not sure who enjoyed it more, me or the kids! Even Fred who isn’t as avid a fan as me thought it was incredible. So, if you ever get the chance to go, don’t think twice!

After that, we headed back home to the coast and managed to just make it in time to get down to watch the sunset on Tilda’s birthday eve. We try and do this for all our birthdays, mainly the kids, and they wave goodbye to the age they were, ready to wake up in the morning a brand-new number! What a weekend.

I never knew I could be so enamoured by a hair tool until the Dyson Corrale came along. I certainly never thought I would go all gooey over a new colour either. I know, I know, I should get out more! It’s just so………slick. So smart and chic in the latest navy and copper. It’s the new gift edition and comes in the super smart navy Dyson box and I got to try it out this week. 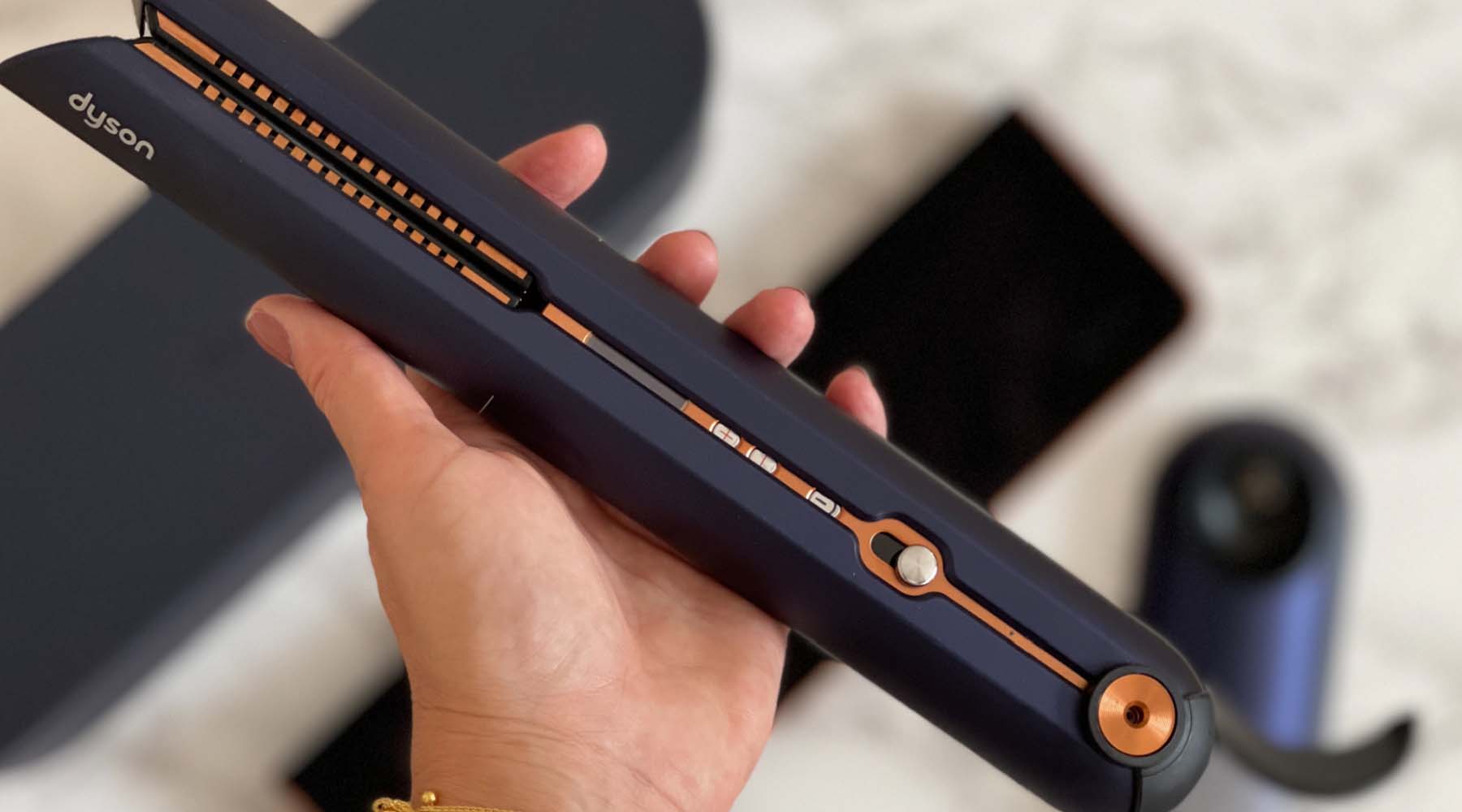 I know they are an investment but it’s also an investment in your long-term hair health as you don’t have to have it set as high as other straighteners and you don’t have to keep passing it over the hair as one pass should be enough to do the job. Funnily enough I use mine more for adding a wave than straightening and I know I’m not alone in that.

I dry my hair first with my Supersonic and then I smooth the Corrale through while adding a turn as I’m doing it which puts in the kink. It’s so easy to use although it might take a few goes when you first try it as they are fatter than other straighteners and heavier. I think it’s probably safe to say they are the best cordless straighteners on the market as they have incredible power and battery life. 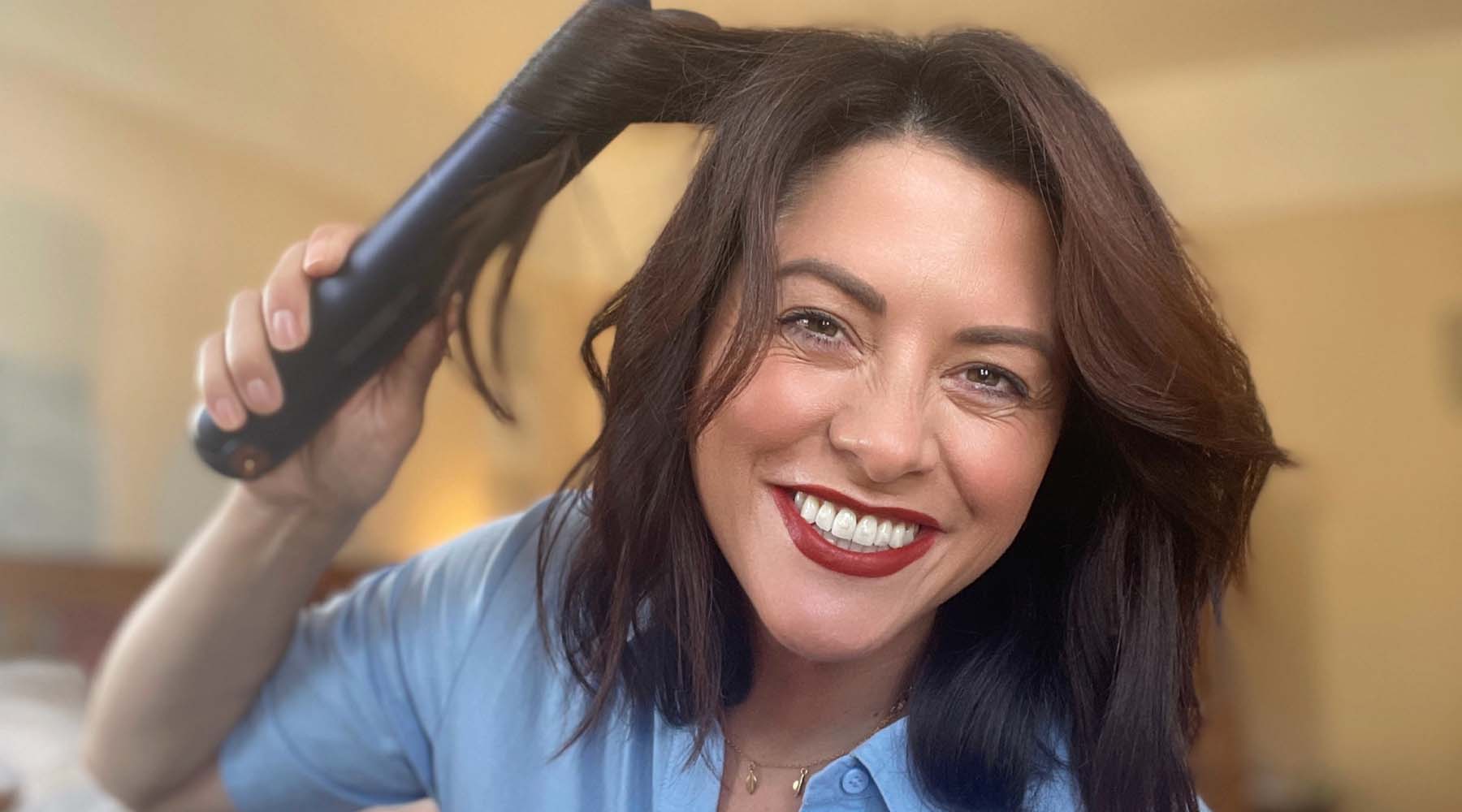 You can however also use them with the cord plugged in if you haven’t charged them. As a beauty gift goes, this is one of the best around and one that keeps on giving! This is one of those times when I can’t stress our money-back guarantee enough as with something of this cost you need to know you will love it. QVC allows you to properly try it and then make your mind up within your 60 days, this money-back guarantee is also extended to the end of January for Christmas gifting!

I’m so happy that we have this as a Today’s Special Value as I personally think this is a really special gift. My mum got me one of these a few Christmases ago and it’s one of my very favourite things. I love the shape of the Neom pod as the ceramic dome is so chic and the way it diffuses the oils into the air is just perfect and it has a lovely glow if you choose to have the light on. 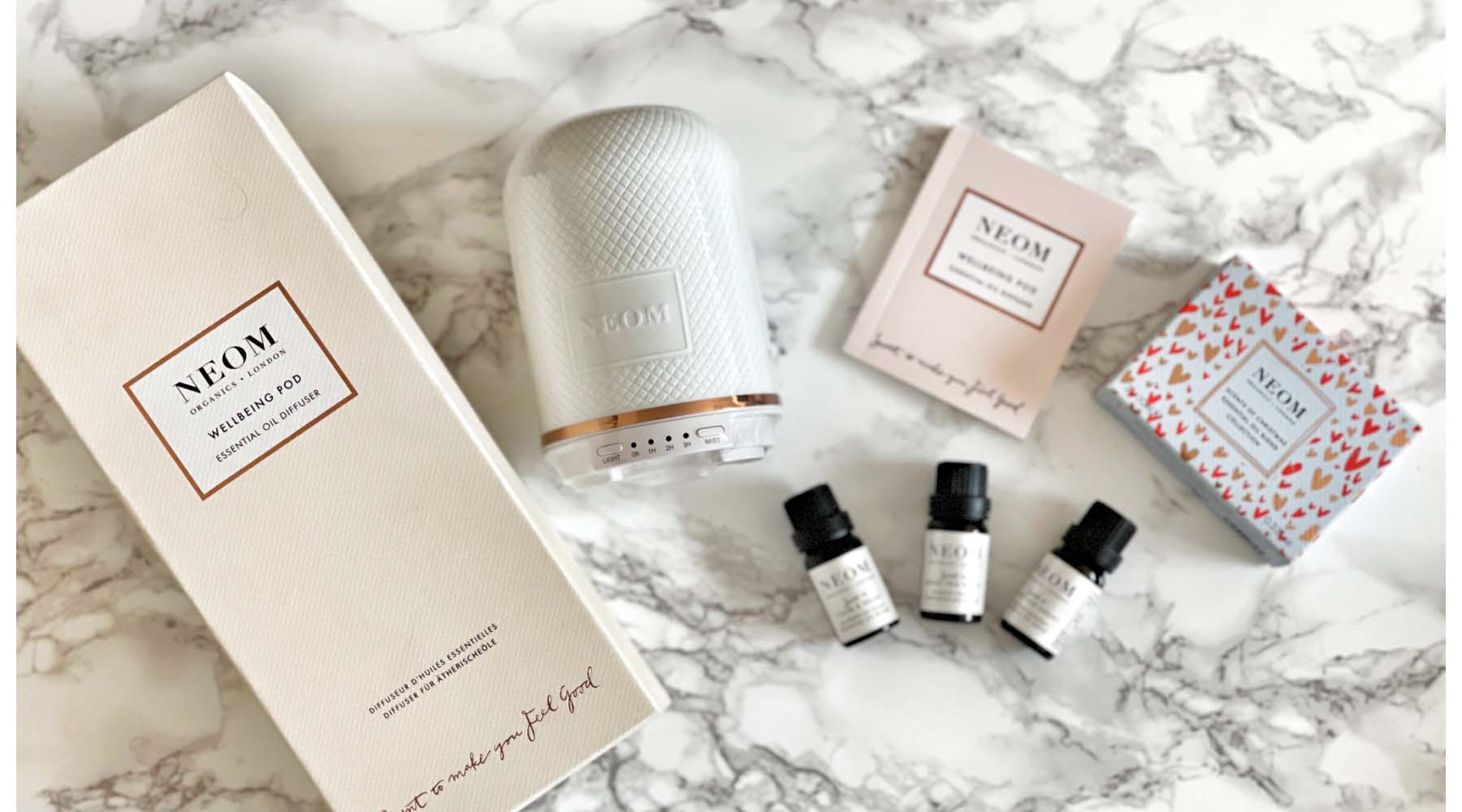 I love to make my own blends of fragrance with my collection of essential oils that I have acquired and I genuinely think it can change my mood when it’s on. I find it incredibly relaxing and even enjoy the ritual of setting it up with the water and choosing which drops I will add. It also means my house smells amazing!

In this offer you will not just be getting the pod but a selection of essential oils too. You will get a set of three including ‘Perfect Peace’ a fresh Nordic take on Christmas with pine, myrrh and lime peel, ‘A Moment of Calm’ which is a heady mix of wild rose and neroli and ‘Precious Moments’ which is a spicy mix of black pepper, ginger and citrus. It’s already available now on Pre-Sell but will be on air from Tuesday 12th at 9pm and throughout Wednesday while stocks last.

That’s it from me for this week. I need to go and have a nice quiet chill out on the sofa now after such a busy few days. I hope you are all really well.