Menu
Stories > Presenters > Julia Roberts > A lot to catch up on

A lot to catch up on 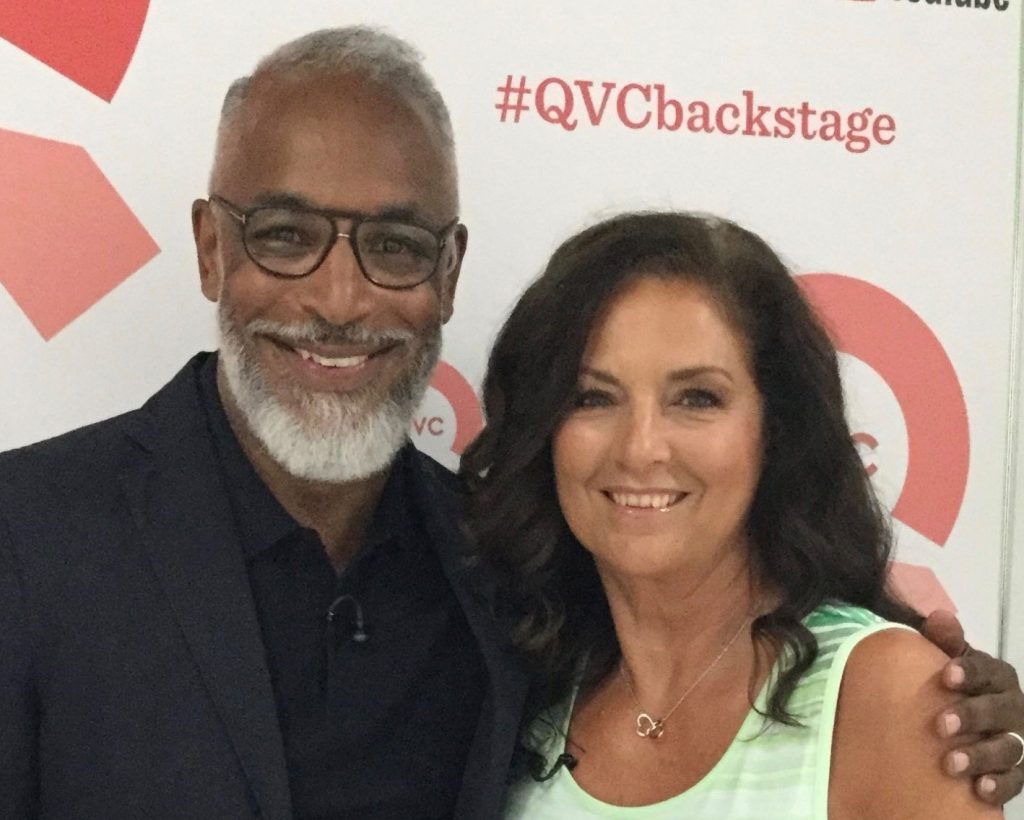 Is it really only two weeks since I wrote my last blog? Maybe that’s because I’ve had a lot going on. Until Tuesday of this week, I was on annual leave and I must say it was lovely to do my first show back with the fabulous Glen Campbell. I love working with him, and I also love this photo taken of us a couple of years ago… to be honest, it seems longer, but then I can hardly believe that around this time last year I fell off my crutches and broke my wrist. That’s all fine now, but still going for physio sessions for my ankle. In fact, I had my latest monthly visit with ‘Brutal Brittany’ on Wednesday and I’ve yet more new exercises to try and build strength and flexibility in my calf and ankle. A work in progress, but definitely getting there!

So, let’s rewind a couple of weeks, shall we, starting with the Superbowl. I’m not really a fan of American Football, but I am lucky enough to have seen the incredible Tom Brady play live when my son, Dan, and I went to New York a couple of years ago to see the New England Patriots v the New York Jets. Brady left the Patriots at the end of last season after twenty years with them and I think most people presumed he would retire as he’s in his forties. Instead, he signed up with the Tampa Bay Buccaneers and amazingly, his new team just won Superbowl 2021 – just goes to show it’s never too late to try something new; a bit like me with my novel writing… more on that later.

Dan and his girlfriend, Katie, decided to stay up and watch it live and Katie thought a few late-night snacks would be in order. She and my husband, Chris, made this snacks tray to resemble the pitch, complete with the ‘video screen’ at one end. Pretzels, popcorn and some homemade guacamole and houmous were just a few of the goodies on offer. All delicious for humans, but nothing suitable for cats, although Wilfie did check it out as you can see. 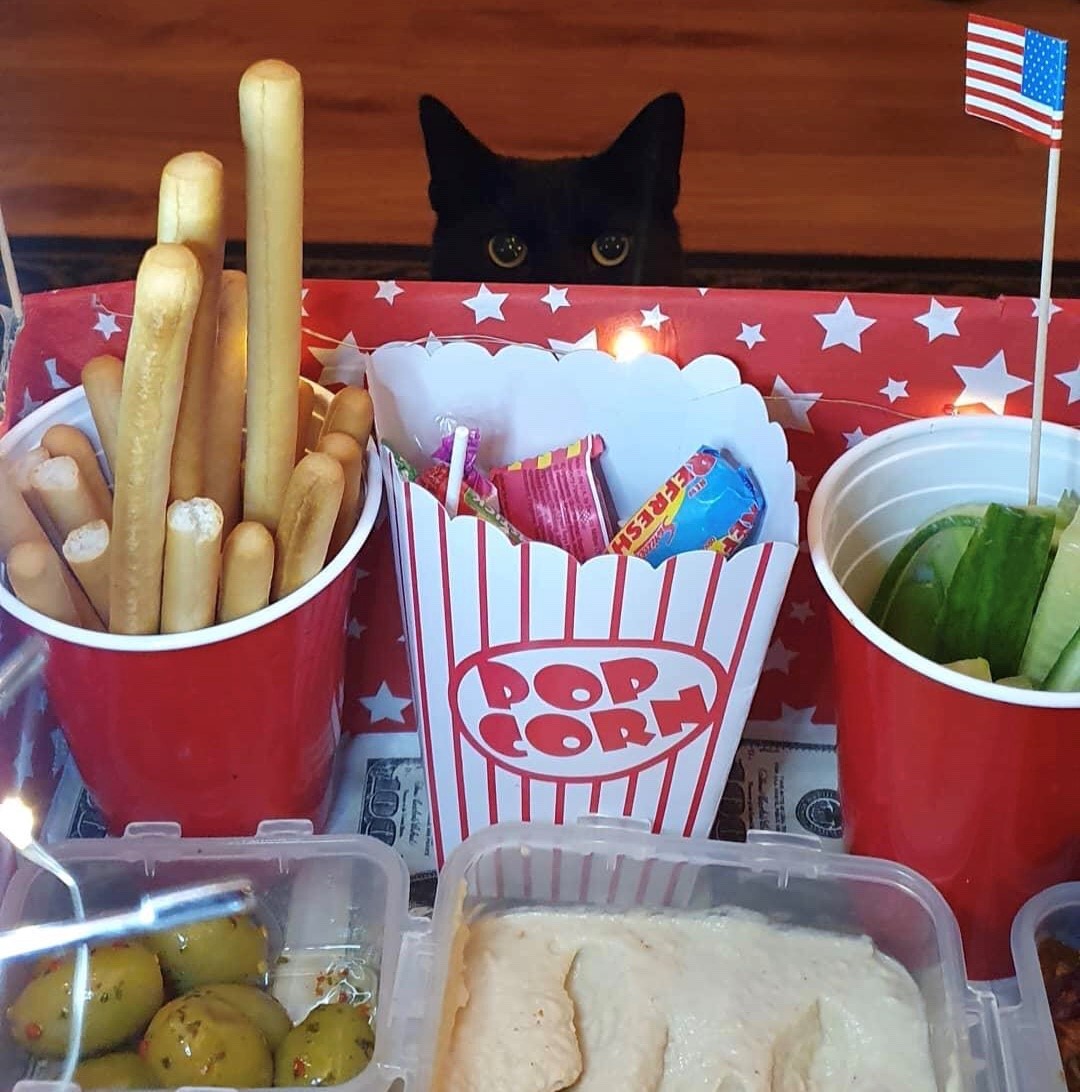 Talking about Wilfie, we had his brother Milo to stay for the day earlier this week as our daughter, Sophie, and her partner, Reece, and his children moved into their new home on Wednesday. Like Wilfie, Milo is predominantly a house cat and ‘escapes’ if doors are left open, which of course they would be with the removal men carting furniture out. The two cats used to co-exist happily when Sophie lived with us, but that’s a few years ago now. Although it might look as though they’re kissing in this picture, it wasn’t all sweetness and light! I’m kind of glad I had my physio appointment and then the rest of the day at QVC! 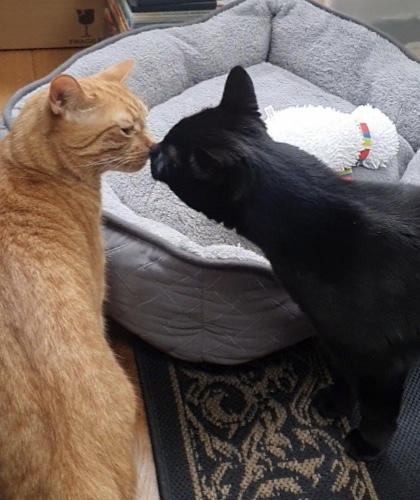 It was a busy day all round actually, as I’d taken Chris to get his Covid-19 jab first thing in the morning. He’s a couple of years older than me at sixty-six, so in the age group currently being contacted for vaccination. However, I had my first jab a week ahead of him, as I’m classified as slightly vulnerable due to my Chronic Myeloid Leukaemia. Just to reassure anyone who is nervous about having it, neither Chris nor I had a reaction other than a sore arm for him and tiredness for a couple of days for me. We’re all different, of course, but my mum at ninety-four was more or less okay with it too if that helps you feel less nervous about having it. 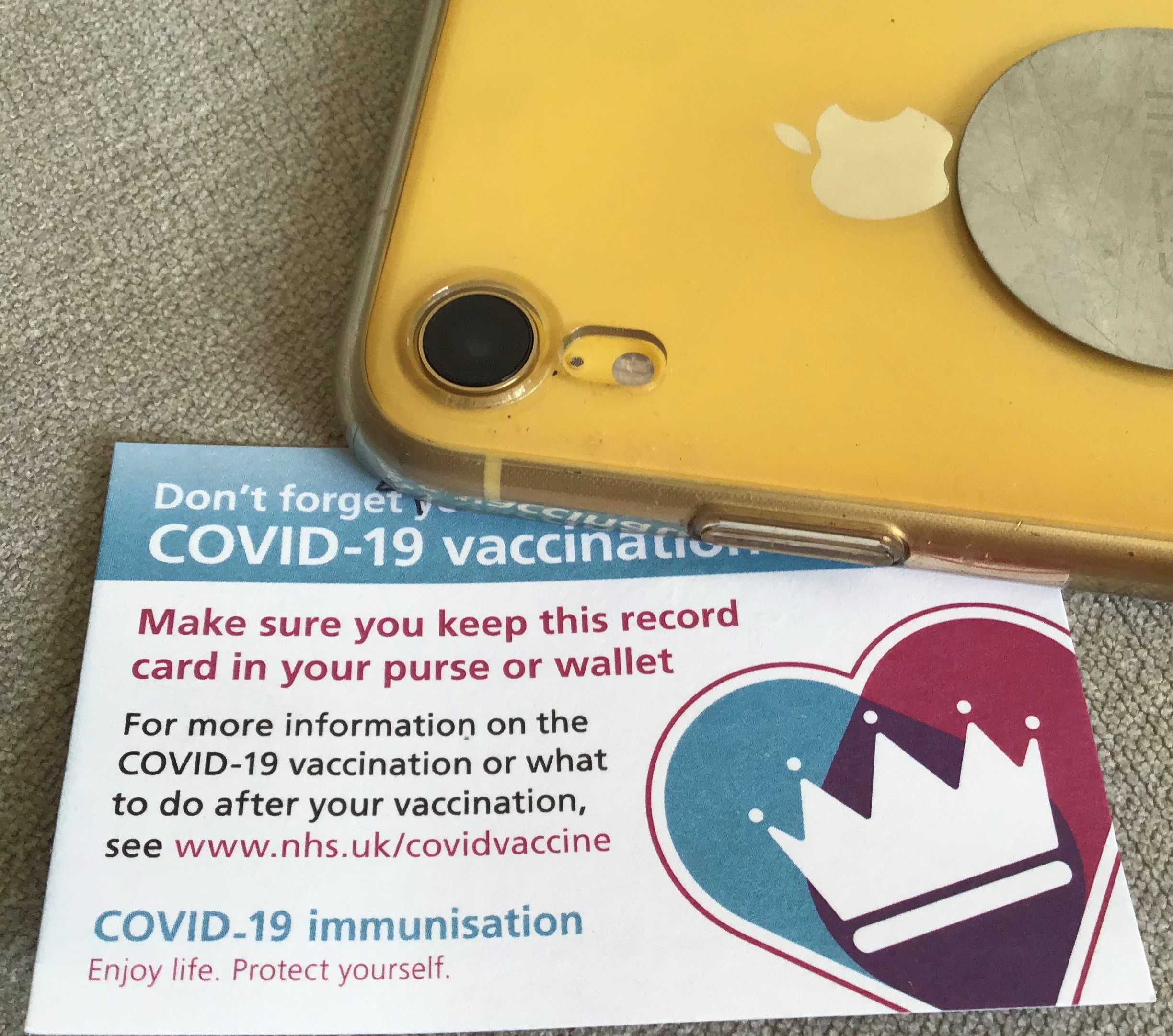 So, the day after the Superbowl, Jackie Kabler and I ‘met up’ for a chat on Jackie’s Instagram. As you probably know, Jackie has been hosting a book club since the first lockdown and now does that every first Friday of the month, but she also does some additional author chats. It was really good to catch up with her purely to talk about books and writing, which we don’t get time to do if we’re in together at QVC. Incidentally, huge congratulations to Jackie for being at number 14 in the chart of the bestselling ebooks of 2020, sandwiched between Richard Osman and JK Rowling, with her most recent book, The Perfect Couple. Every author dreams of a ‘breakthrough’ book; sometimes it can be a debut, sometimes an eighth or ninth book and sometimes it doesn’t come at all, but this was most certainly Jackie’s breakthrough and I’m delighted for her.

It was quite funny that Jackie opted to wear her pink WULI:LUU jumper, as I’d been debating whether to wear mine. Incidentally, Fashion on Friday today is WULI:LUU, Gok Wan’s range for QVC. Instead, I chose to wear a yellow jumper as I thought it matched in better with the cover colours of my new book, My Mother’s Secret – here I am at my writing desk, just before my chat with Jackie. 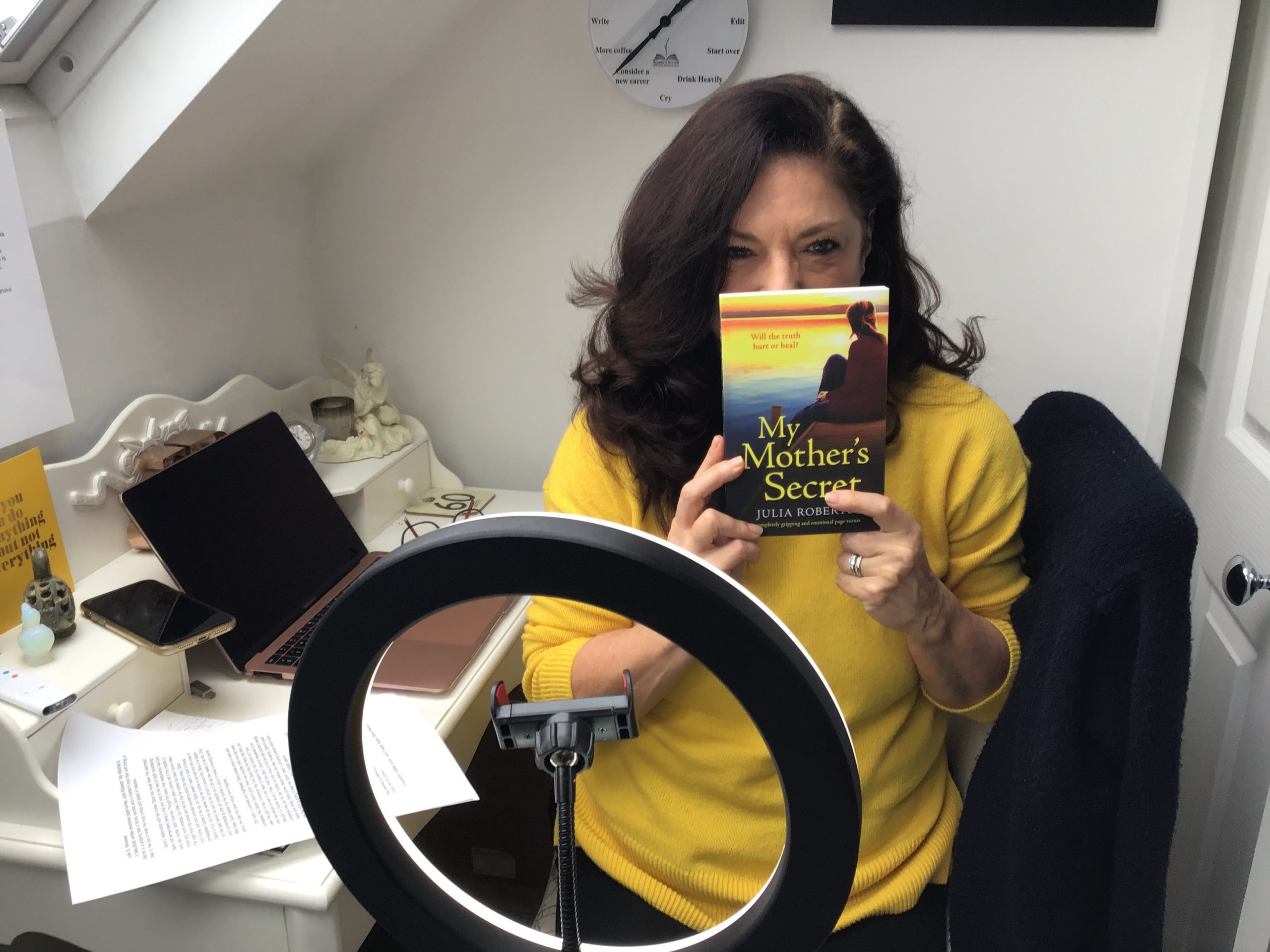 As you can see, my MacBook is open as I’d been busy writing in the morning, but I have to own up and say I had to request an extension to my deadline as I just didn’t feel creative after my ‘jab’!

By the Friday, though, I was back at my desk, after my physio/aeropilates session, but still found time to make a cashew nut stir fry in black bean sauce, served up with egg fried rice, noodles, veggie spring rolls and crispy seaweed, to acknowledge the start of the Chinese New Year… Gung Hat Fat Choy. Excuse the Italian serving dishes, but we don’t have any Chinese ones! 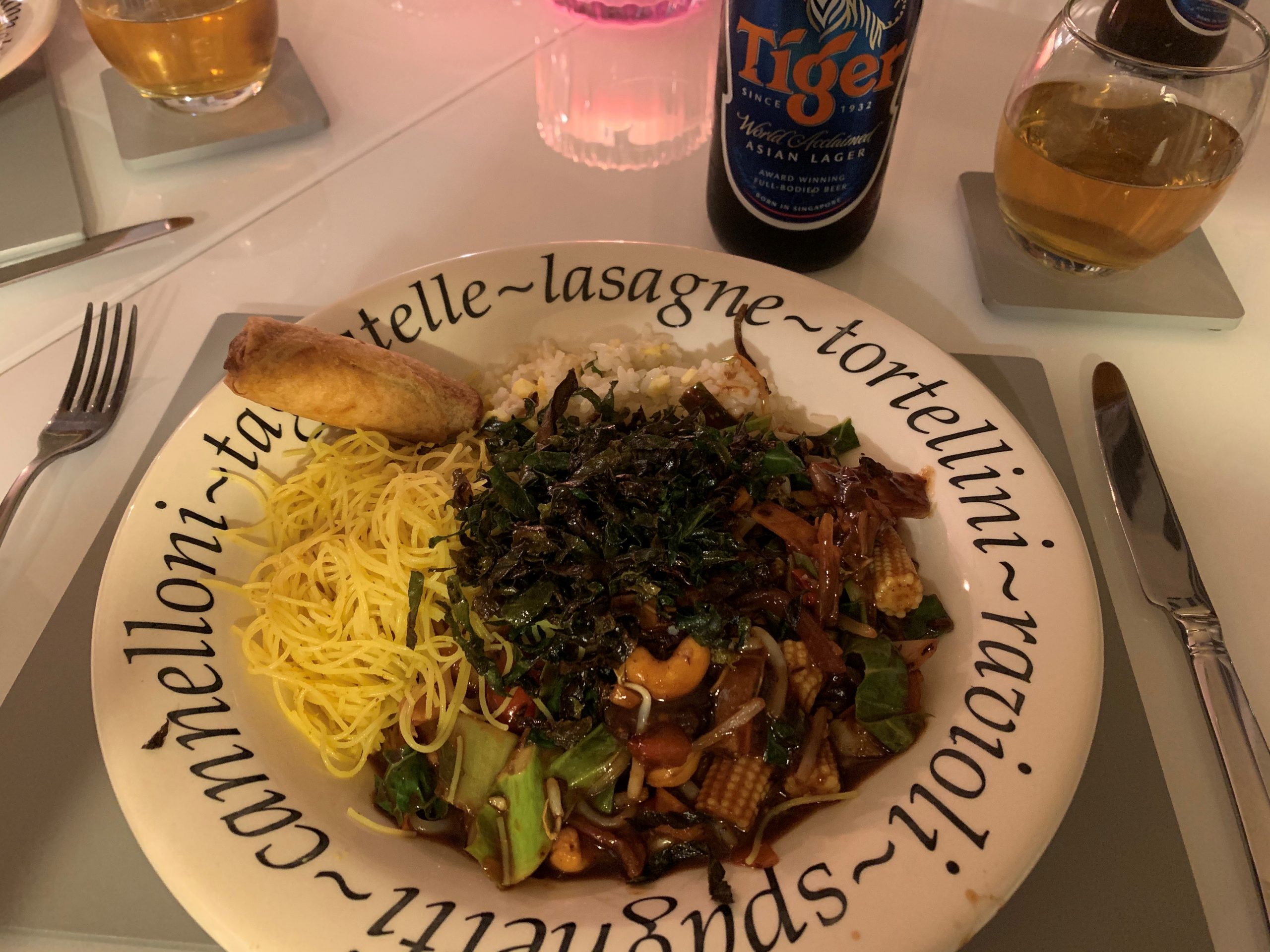 Funnily enough, I hadn’t actually realised it was Chinese New Year until the previous day when I decided to do a Throwback Thursday post on Instagram – I’m @juliagroberts, if you would like to follow me there. I chose a couple of photos from when I worked in Hong Kong in 1979 – this one, with fellow dancers Tricia and Suzanne, was our first day off after our show had opened. We were waiting at the taxi rank on Hong Island after travelling over from Kowloon side on the Star Ferry, to go and explore Stanley Market. Happy memories, but for those of you who watched ‘The Serpent’ television series there is something a little bit too familiar in those pictures. 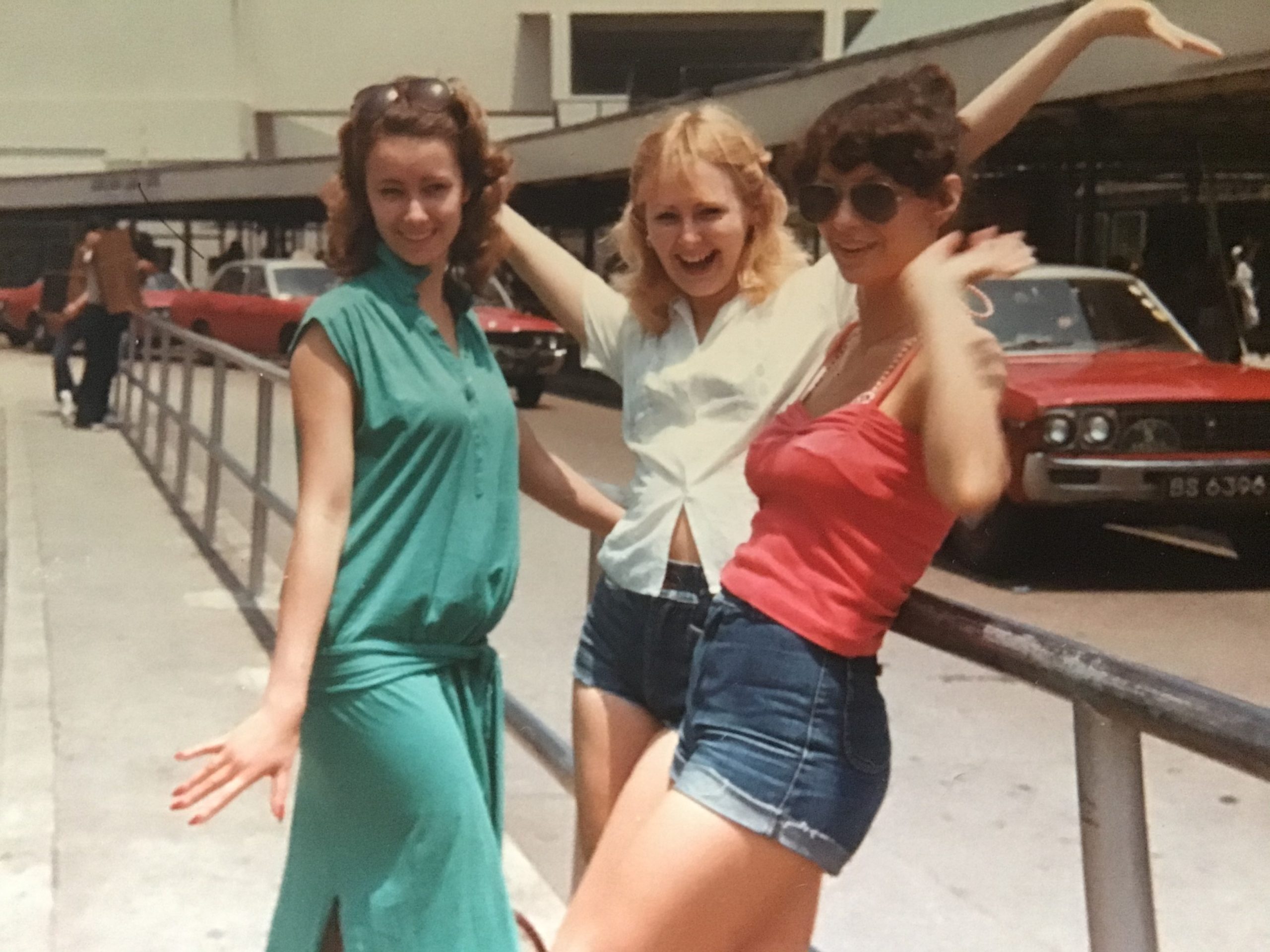 And then, of course, it was Valentine’s Day. It’s a running joke in our house that Chris is not very good at loading the dishwasher, so this card was just perfect for him – I also included a free pass with his card permitting him to load the dishwasher exactly as he wanted for one day only! 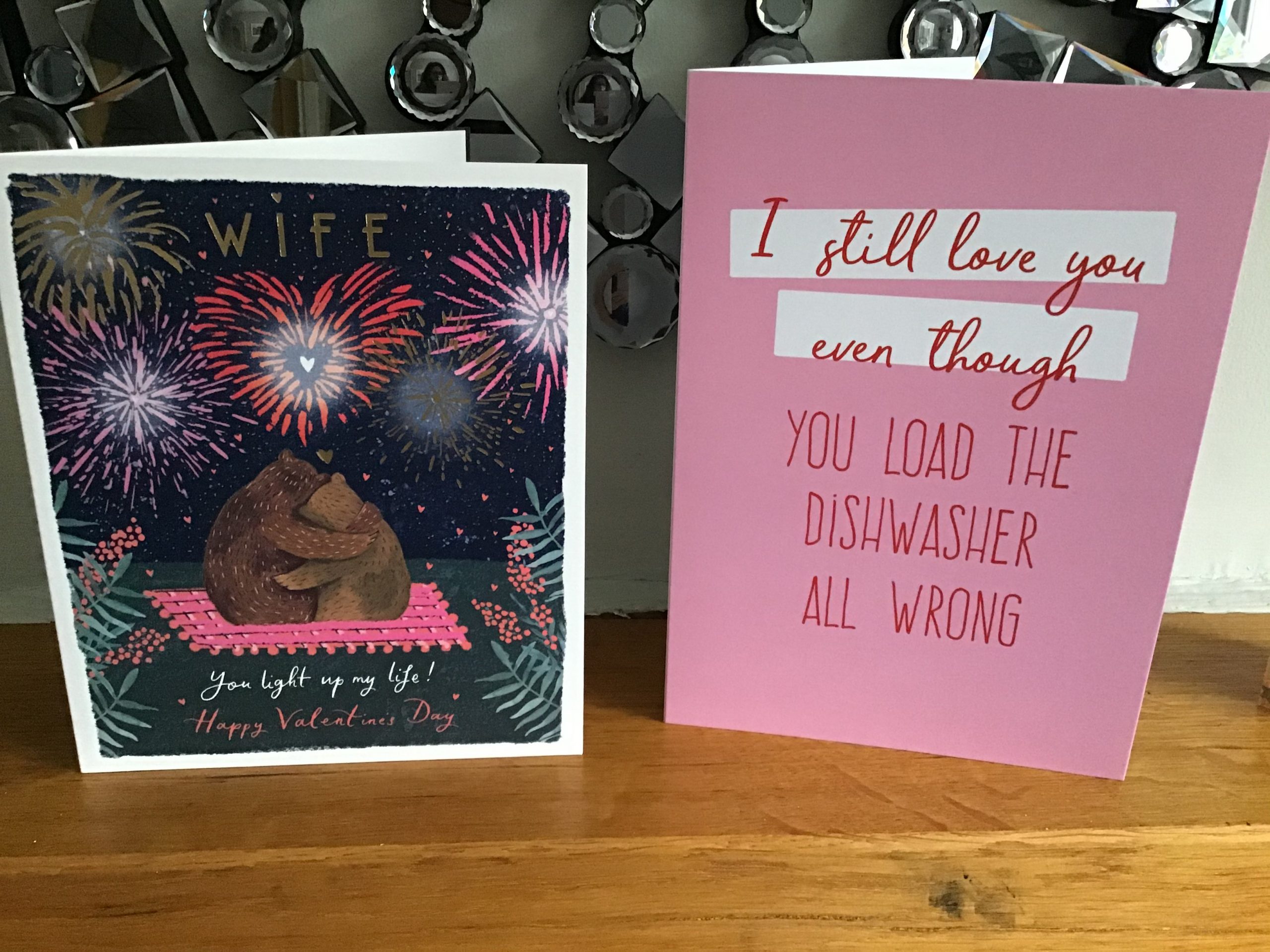 Katie and Dan had decided on homemade pizza for dinner and very kindly made enough dough, using the KitchenAid that they bought from QVC, for us to have one too. Chris did our topping as, once again, I‘d been at my writing desk, and I have to say he did a great job. Using the tomato sauce Katie and Dan had made from scratch, he added olives, capers, sundried tomatoes, onion, sweetcorn, peppers, mozzarella and cheddar… delicious! I’d made a chocolate heart-shaped cake for afters, so a bit of a ‘naughty’ meal, but good as a treat. 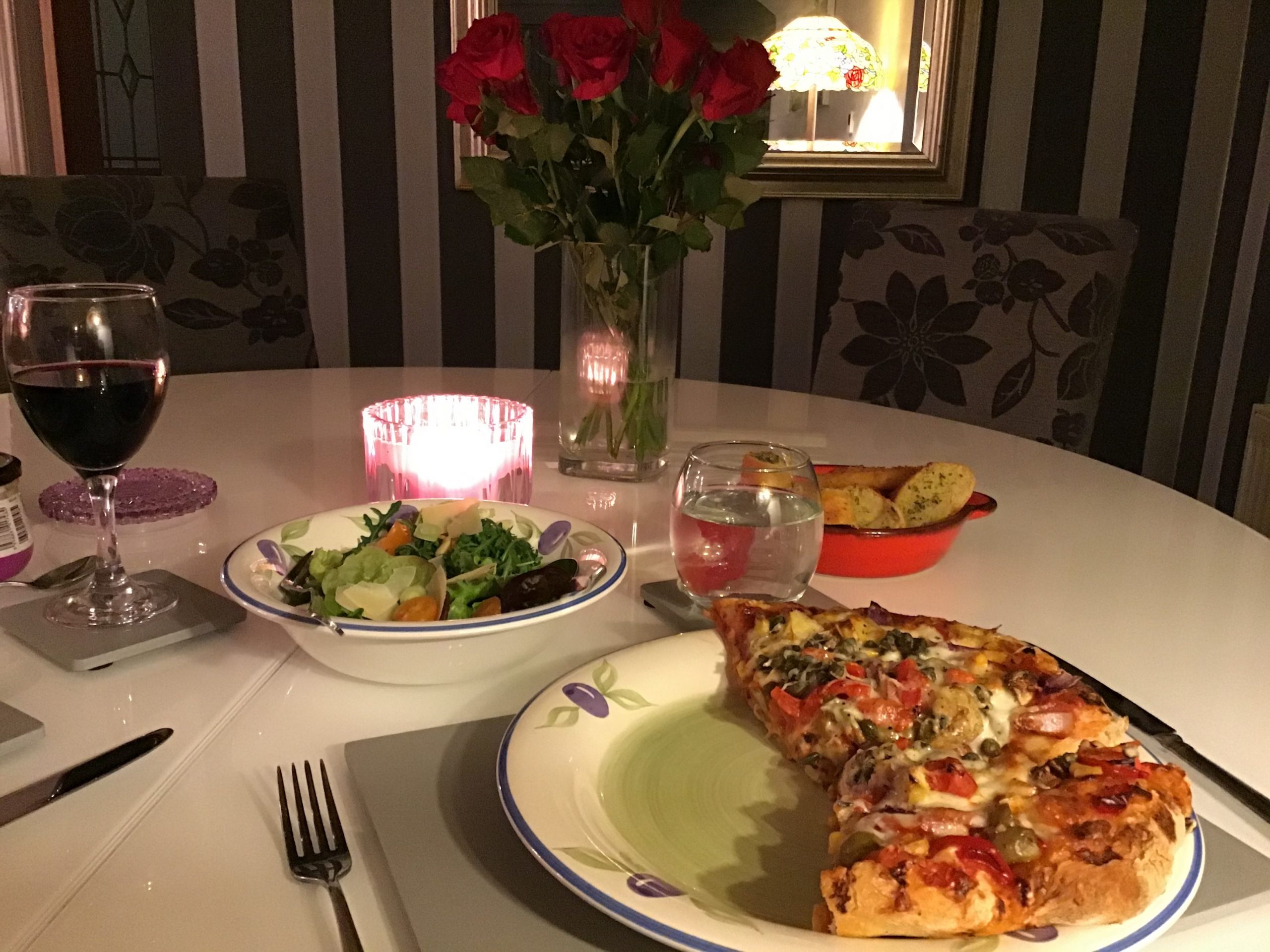 Whilst on the subject of food, I’ve mentioned before that we make our own bread – well, we put the ingredients in the bread maker, and it does the rest. Katie and Dan are hoping to move into a house of their own soon and just at the right moment, we have a bread-maker Today’s Special Value coming up on QVC next week. It’s from Cook’s Essentials and launches on air on Wednesday night at 9pm – I’m thinking a good housewarming gift, maybe?

Thinking of gifts for others, I’m already looking ahead to the Liz Earle Today’s Special Value a week on Sunday, with my mum in mind for Mother’s Day, which is rapidly approaching. It features Cleanse & Polish and Instant Boost Skin Tonic in the limited-edition Rose & Lavender fragrance, plus a new hydrating skin mask among other things – do watch our website for details of when it will be available to pre-order. I have the 2pm show with Caroline Archer and I’m really looking forward to it. 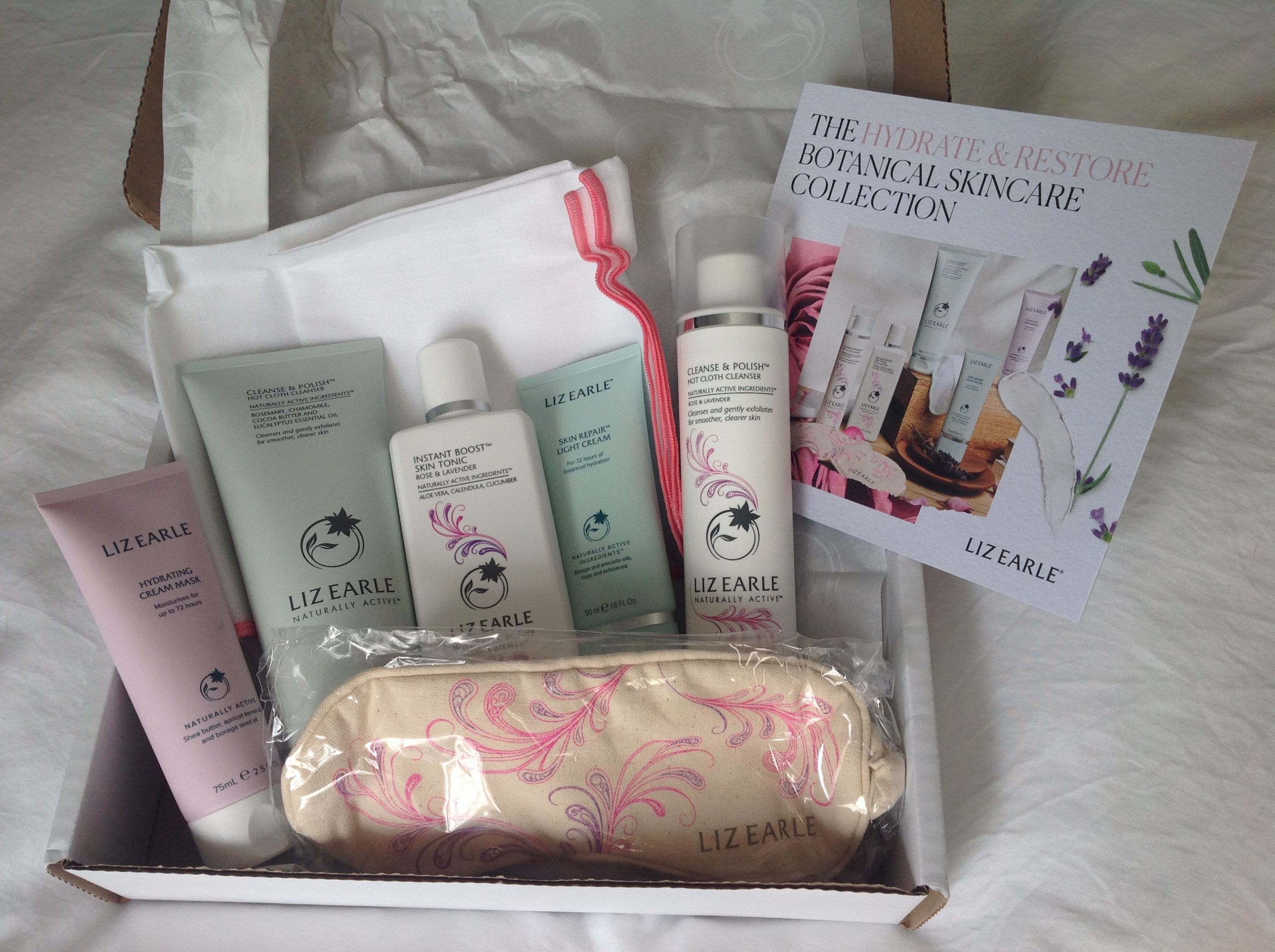 I’m not in this weekend, but if you’re looking for a new vacuum, we have the Dyson V10 Animal as our Today’s Special Value tomorrow. Then, on Sunday, it’s a fabulous bundle from Richard Jackson of 24 Garden-Ready Busy Lizzies and Cosmos plants with 475g of his iconic Flower Power – another purchase, methinks!

That’s it from me for now.
Much love,
Julia xx