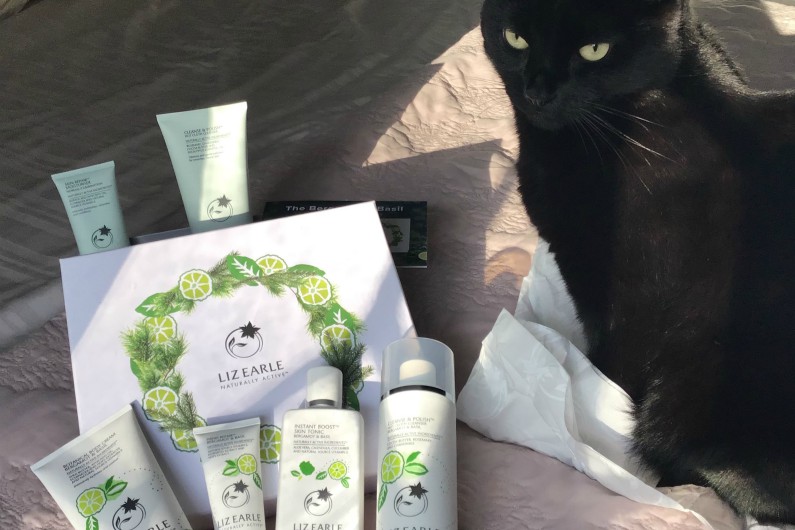 Those of you who have been watching QVC a long time will know that the first ever product I tried from the Liz Earle range was the Instant Boost Skin Tonic. I fell in love not only with the calming effect it had on my skin but also with the aroma, so imagine my trepidation when Caroline Archer told me they were bringing it out in a new limited edition fragrance for this year’s Christmas TSV. I really was quite unsure about Basil and Bergamot, unsure, that is, until I smelled it. I cook with basil a lot so wasn’t sure what to expect, but I have to say I was very pleasantly surprised and it does make a lovely fresh uplifting change from the original.

The TSV is a six-piece collection, with four of the products in this new aroma: Cleanse and Polish in 150ml pump dispenser, Instant Boost Skin Tonic, Body Cream and Hand Cream. There is also a double-size of Original Cleanse and Polish (i.e. a 200ml tube), and Skin Repair Face Moisturiser in a tube, which is where your choice of skin type comes in. If it’s a gift and you’re not sure on the skin type, go for normal/combination, and remember, anything bought as a gift comes with an extended money back guarantee to the 25th January AND the beauty P&P at the moment is only £1.95. It all comes beautifully gift-boxed with the items inside the box packaged in tissue paper. Whilst most of us love the products, it was the tissue paper that attracted Wilfie, the cat. I went to get my phone to take a photo and when I got back he was sitting on the tissue paper with that ‘mine, all mine’ look in his eyes… cats are so funny!

Anyway, it’s already proving very popular since it went on pre-order and has had ten out of eleven five star reviews on our website already. You can breathe easy, Caroline Archer, regarding the limited edition aroma for Instant Boost – it has a thumbs up from me. I’m sorry not to be on air with it this Sunday, when I’ll also be missing Butler & Wilson shows, but it’s just the way my schedule fell on this occasion – I work alternate weekends, and this is my weekend off.

Talking of our fabulous beauty guests, of which there are many at QVC, it seems Keeley Aydin from Elemis was a little annoyed with me for not saving her some of the apple pie I had posted a picture of on Instagram, so on Saturday when I got home from my on air shift, along with making my signature spinach and cottage cheese lasagne for dinner, I also made an apple crumble. You should have seen Keeley’s face light up on Sunday when I gave some to her in a Lock & Lock along with another Lock & Lock filled with custard. She was supposed to heat it up in the microwave but couldn’t resist and ate it cold, as did Chris and I when we finished off the remainder on Sunday evening. I’d used all butter instead of a mix of butter and white fat and it was delicious… I shall definitely do that again!

It’s been quite a week for me. After launching my Diamonique design bracelet to a sell-out success on Monday – I hope you love it if you bought it – I headed in to London to get the ankle treatment I mentioned fleetingly in last week’s blog. I needed steroid injections in my ankle, but also Botox injections in my calf. Yes, Botox!! I’ve always said I would never have Botox, but of course I mean in my face. The doctor asked me pre-injection if I was allergic to anything and I said, ‘Yes, injections!’ I’m not going to lie, because of having to get deep into the gastroc muscle in my left calf to try and relax it for all the physiotherapy I have coming up over the next few weeks, it actually hurt quite a lot and I’m usually pretty brave when it comes to pain having had two children and two bone marrow biopsies. Also, I thought it was one injection rather than the four I actually had, plus the steroid ones in my ankle. But I survived, and my first physio appointment is today, getting my ankle to the best it can be before surgery early next year.

The timing of starting this treatment (it’s taken four years to get help with the progressive weakening) is pertinent as next Wednesday is World Polio Day, and for those of you who don’t know, I am a paralytic polio survivor and ambassador for both Rotary International in their attempts to rid the world of polio, and also BPF who help people living with the after effects of polio.

Unfortunately, cases of wild polio still occur in some countries in the world, despite the vaccination programme largely funded by Rotary International. As the doctor was sticking needles in me, he commented how important it is to keep up with vaccinations in this country as one infected person, a carrier who doesn’t even know they have it, could cause an outbreak even in western countries where there haven’t been new cases for years. Polio can paralyse and even kill – please protect your children.

I wonder how many of you have listened to the Inside QVC podcast? Having said on last week’s blog that it had been downloaded in fifteen countries, I can confirm it’s now twenty-five and has had nothing but five star ratings on Apple podcasts so far, which is great to see. The one that I did with Will went live on Monday and is still the current one if you link from here, but there will be a new one featuring Judith Williams on Monday, followed by fellow presenter (and fellow crime author) Jackie Kabler on Monday 28th.

All the ones that have featured so far are still available to listen to including Nikki Gerwitz who founded Lola Rose, the brand of our TSV today. If you haven’t seen it yet, be quick – 343173 is a bracelet and necklace set, which as I write this at 10.30 Friday morning has already sold out in one option – my favourite is the Green/Pink mix.

I was also given a sample of this Big Deal from Vagabond to try out – it’s a long hot water bottle perfect for draping over achy shoulders or just to keep your neck warm in a draught. It’s a great Christmas present idea for someone a little older (I’m thinking my mum at 93) and my sample was even in my favourite colour!

Although our jobs as QVC presenters are mostly studio-based these days, I was out on a shoot on Wednesday, which made a nice change to my routine. I can’t say too much about it at the moment but here’s a couple of behind the scenes shots. I was a fun day that didn’t feel like work because of the people I was working with and some great 80’s tunes!

My Fashion on Friday today is with Kim from Kim & Co, who is celebrating twenty-two years with QVC UK and is still one of our most popular fashion brands. And I have the lovely Glen Campbell for FOF on the Style channel at 6 pm.

Have a great weekend (and tune in to BBC Radio Berkshire at 9.30 Sunday morning for my chat with Debbie McGee if you fancy it – books and so much more!)