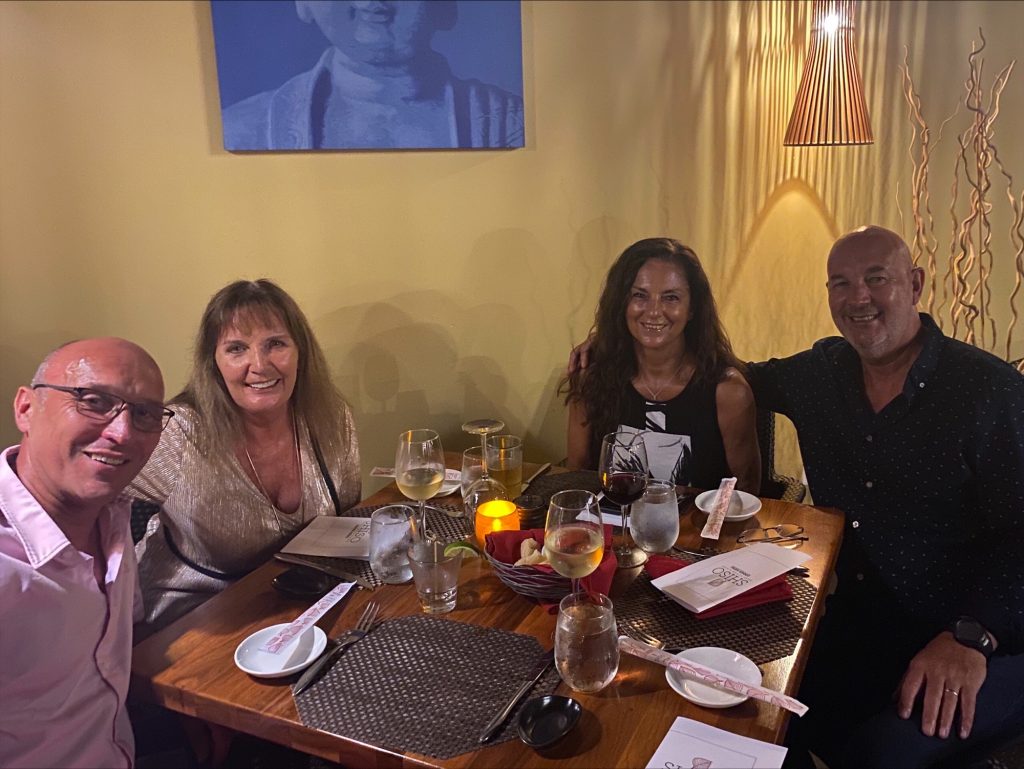 Apologies for the lack of a blog last week, but I was away on holiday. Again, I hear you ask? Yes, again, but it was to celebrate my friend Denise’s birthday who I’ve known since we met doing the Price is Right in 1983! For three weeks each year, she is the same age as me – more about my birthday and a giveaway later. 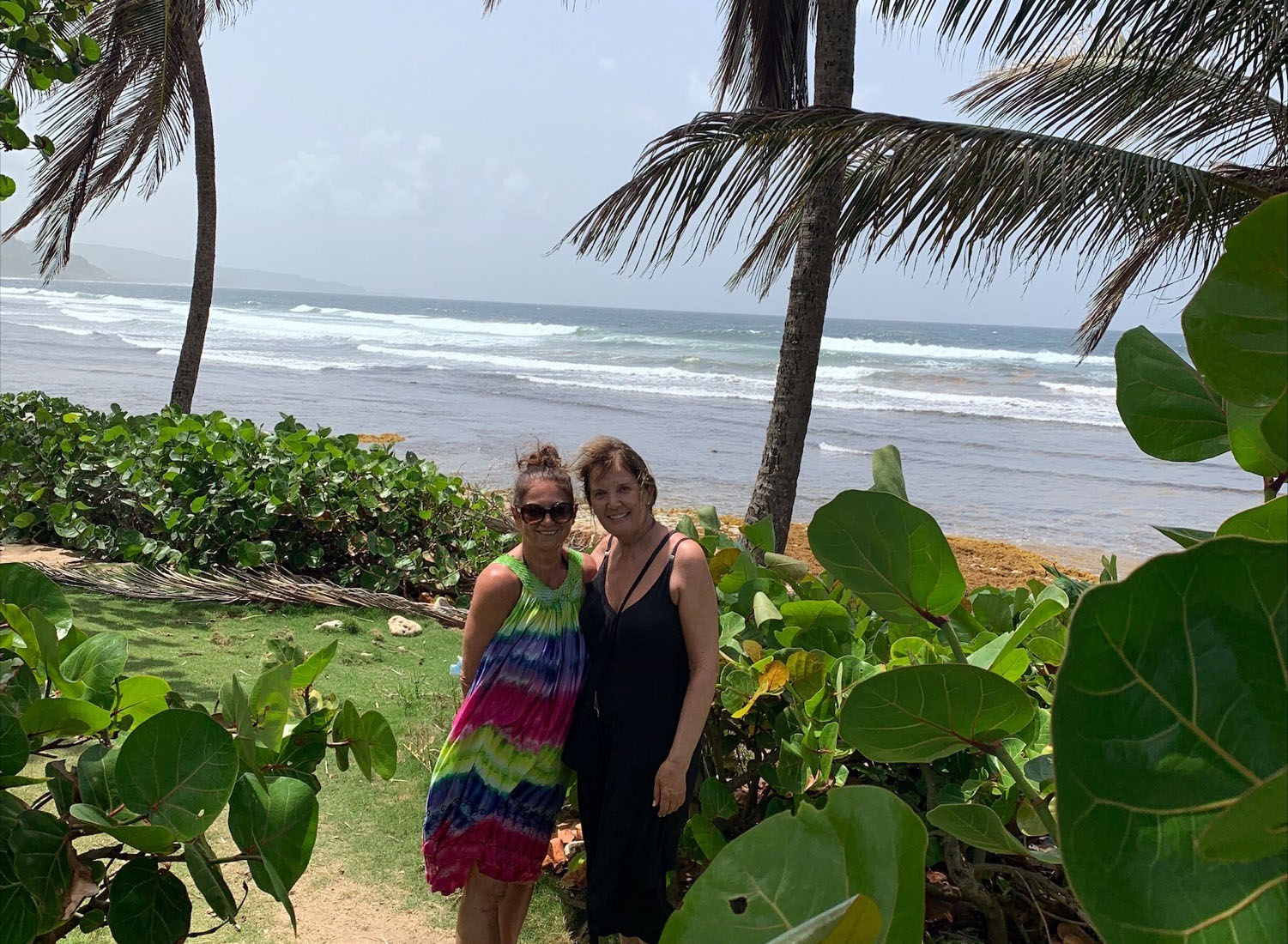 The holiday to Barbados was organised back in January and for Chris and me, it was a return to the Crystal Cove resort that we visited for the 30th Anniversary of us living together. It was a bittersweet occasion back then. I almost cancelled after losing my lovely dad just a couple of months before, but Chris thought we should go. I’m pleased to say it was a much happier visit this time around and in great company too. 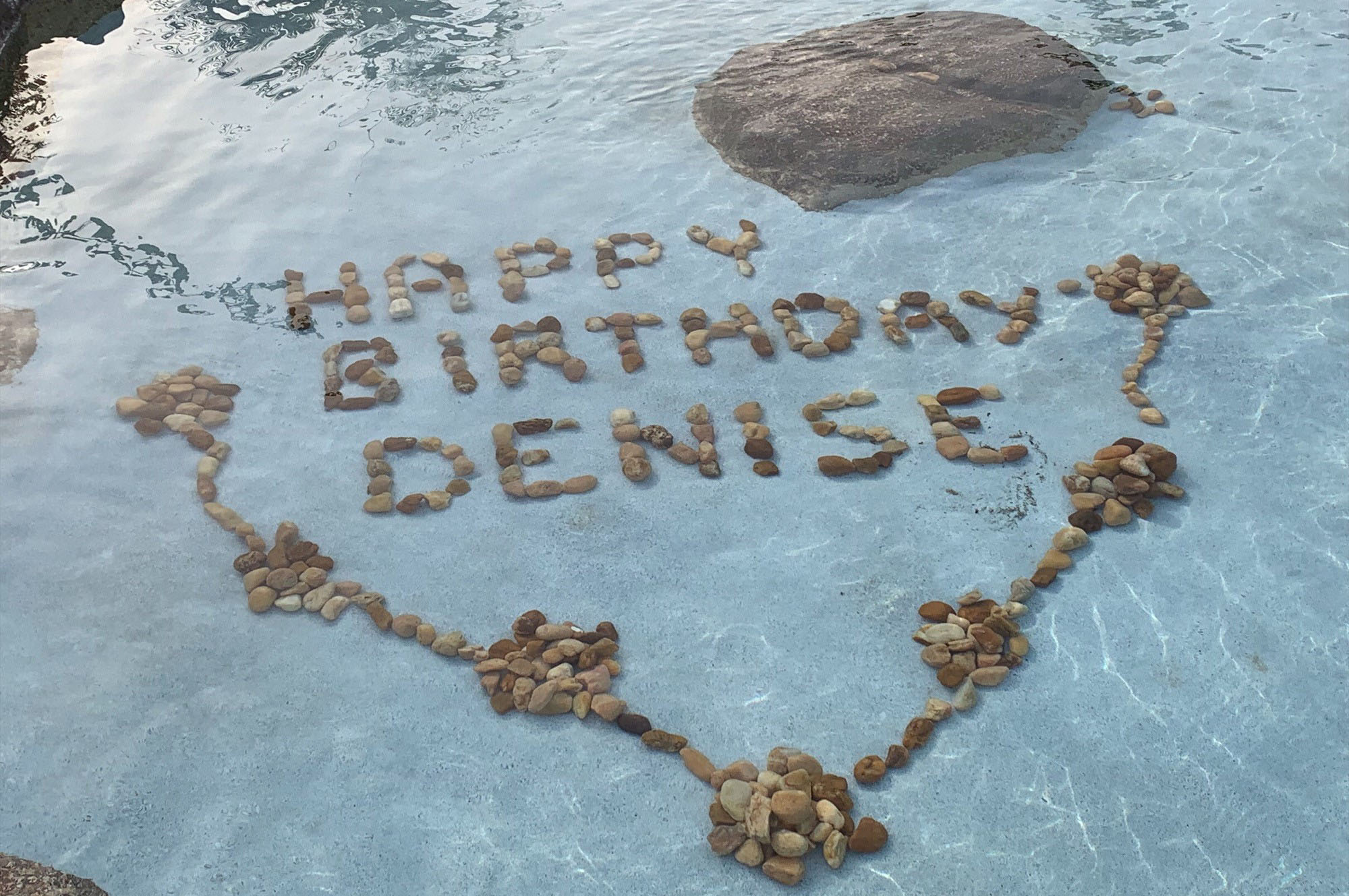 For Denise’s birthday, we had the hotel arrange the pebbles in the pool and we also ordered some chocolate dipped strawberries which we enjoyed with cocktails over a game of cards after a delicious dinner at a sister hotel. I’ve discovered a new favourite cocktail called a ‘mud slide’. I have no idea what is in it, but to me it tasted a bit like a chocolate milk shake. It’s a good job I was up every morning for a beach walk and had a twenty-minute swim in the pool each day or I’m pretty sure I would have put on a lot more weight than the 1lb I actually did! That would have been a shame, as I’ve worked so hard to lose the weight in the first place. Still, it was a holiday, and you need to let your hair down and relax sometimes.

And relax I did. I didn’t take my MacBook Air with me on this holiday as I normally do, so no writing was done, hence the lack of a blog last week. Instead, I read two and a half books, one of which was called How to Kill Your Family… I wasn’t looking for ideas!!! 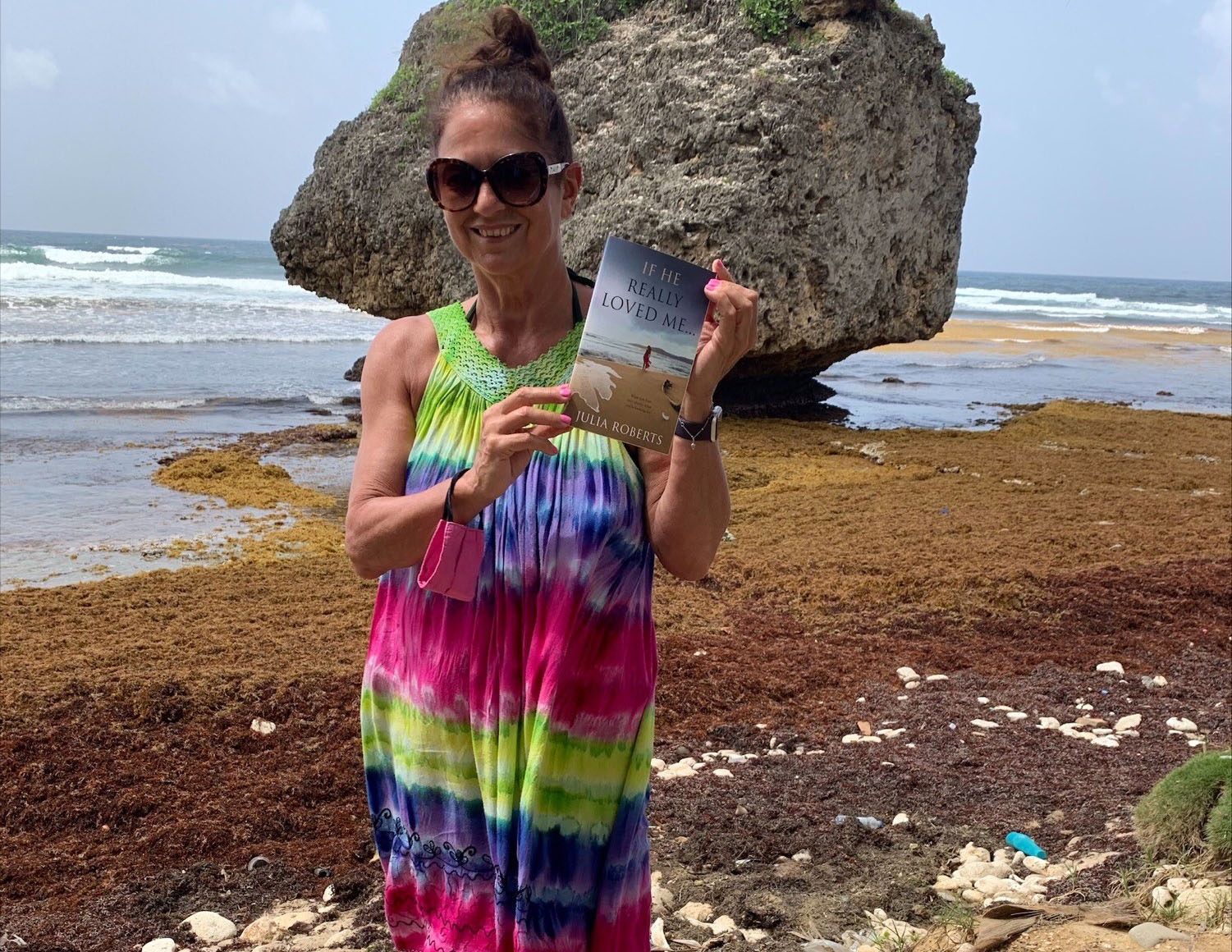 I also took a few of my books to take some photos with and then leave in the resort as I usually do. One of them, If He Really Loved Me, was particularly relevant as it is partly set in Barbados. We took this photo in the east coast resort of Bathsheba where my favourite scene from the book was set – in my book, though, there was no seaweed. Apparently, the weed has been particularly bad this year but fortunately it didn’t wash ashore on the west coast where we were staying. 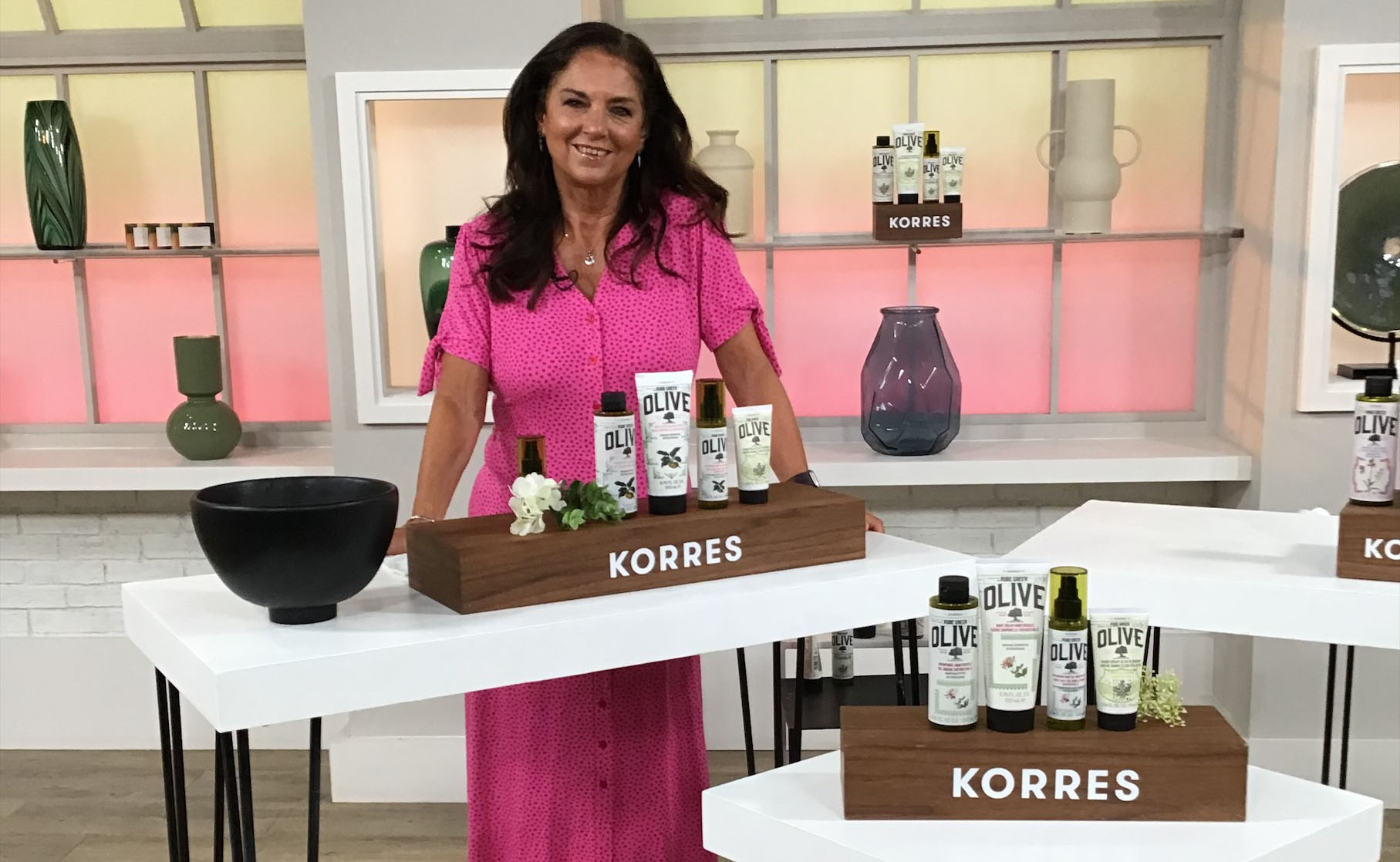 If you saw me on air on Wednesday, you will have seen that I have quite a deep tan. It’s not from sitting out baking for hours, I can assure you, as the sun was far too intense for that. It’s because I was using my favourite Ultrasun Tan Activator SPF 30 products for face and body. Actually, the body option is the beauty Supersize of the Month at the moment, with over a £10 saving if you wanted to try it. It’s a 400ml size, but it does have a 2 year shelf life once opened. You still need to be sensible in the sun, even when using Ultrasun, if you want to protect your skin. I applied after my shower in the morning, before going to breakfast and sat in the shade between 11am and 3pm, and if I did go for a beach walk, I wore a peaked baseball cap to shade my face. I also exfoliate on alternate days using the Liz Earle Gentle Face Exfoliator and a Decleor body scrub. 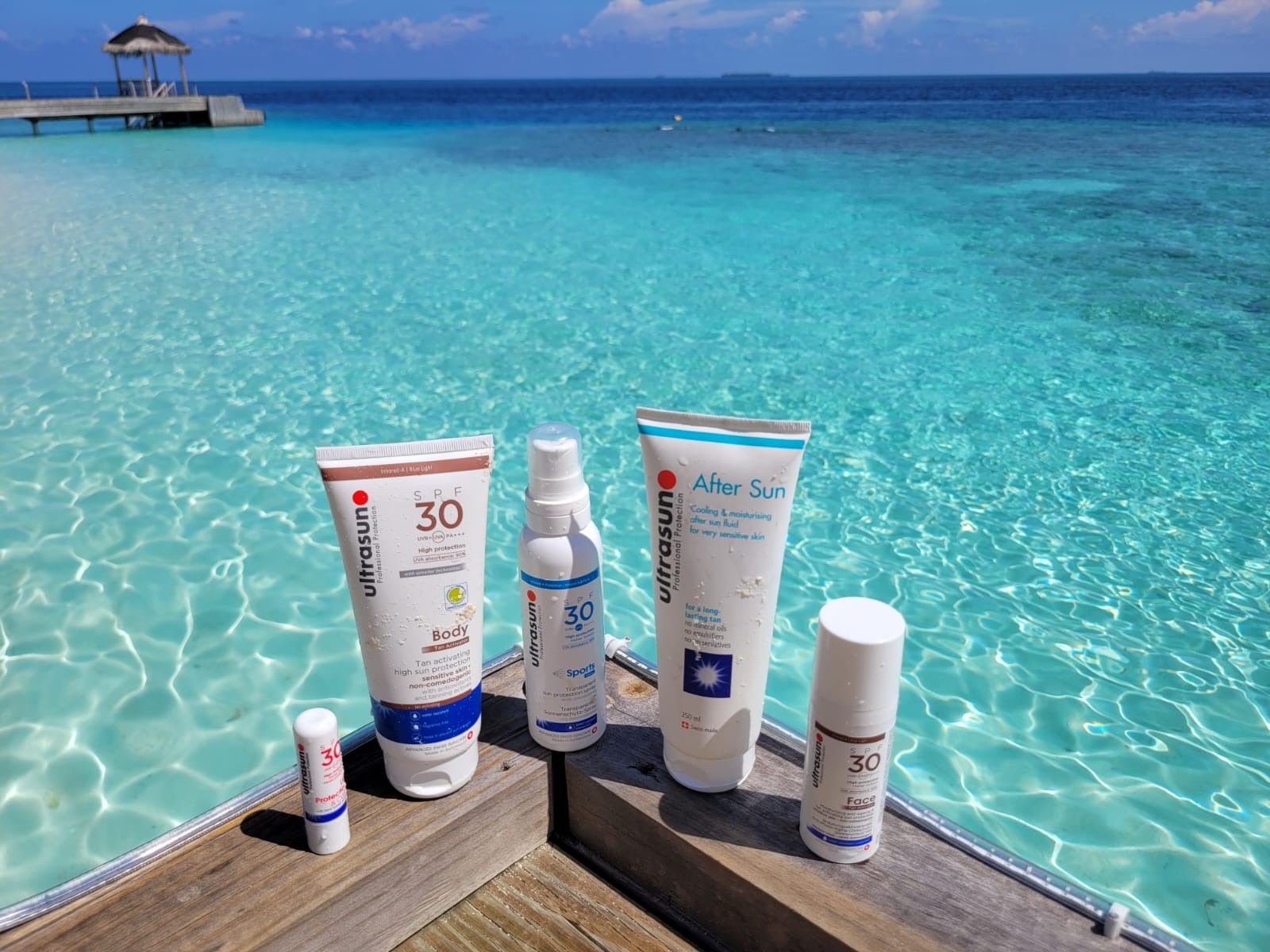 Talking of beauty products that I use, I was asked a question about my current faves on a virtual coffee morning chat that I had with some of our QVC customers just before I went on holiday. 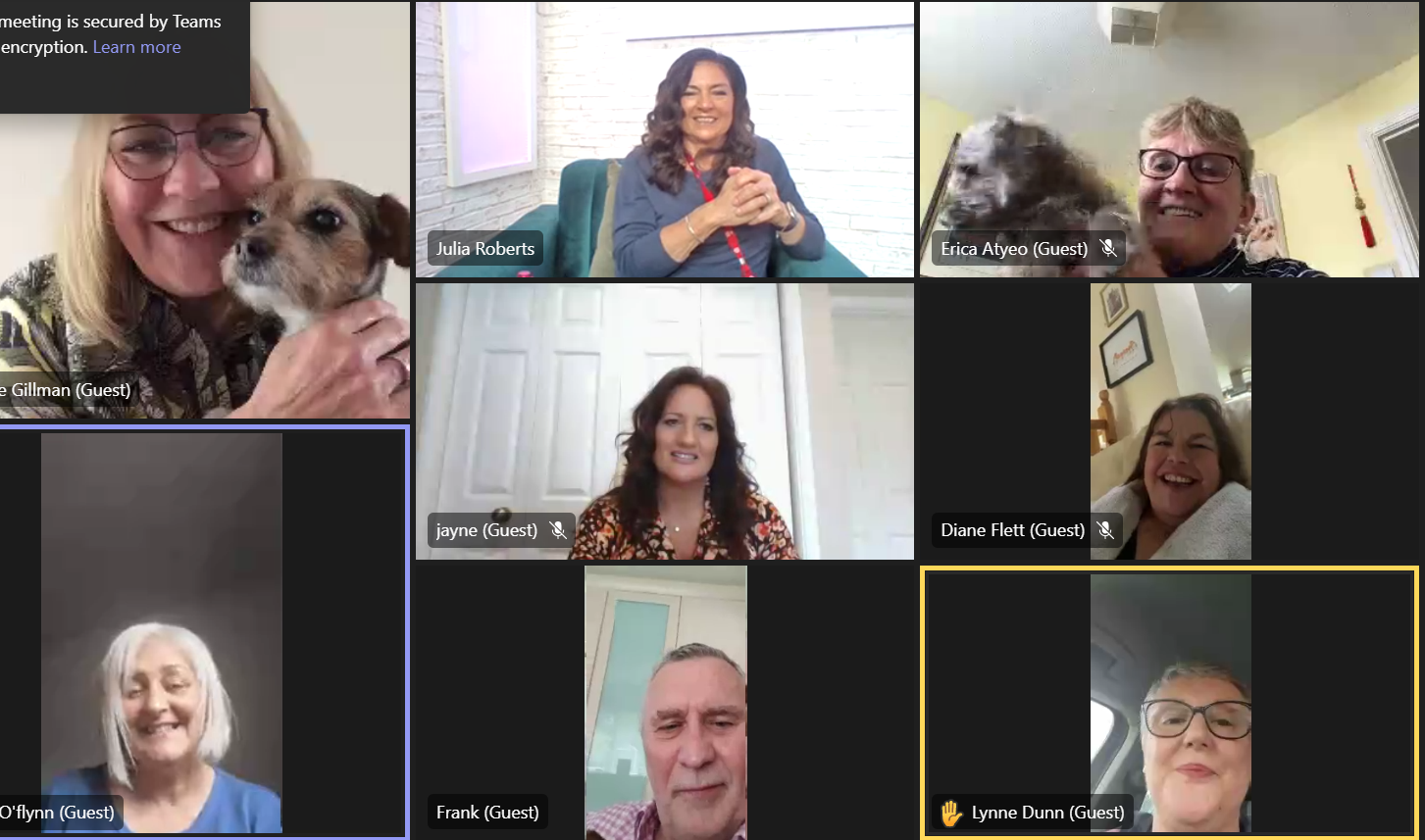 I put my presenter manager on the spot by asking if I could to a ‘birthday giveaway’ competition of some of my faves and he said yes! It will be on next week’s blog, so do remember to check back in. 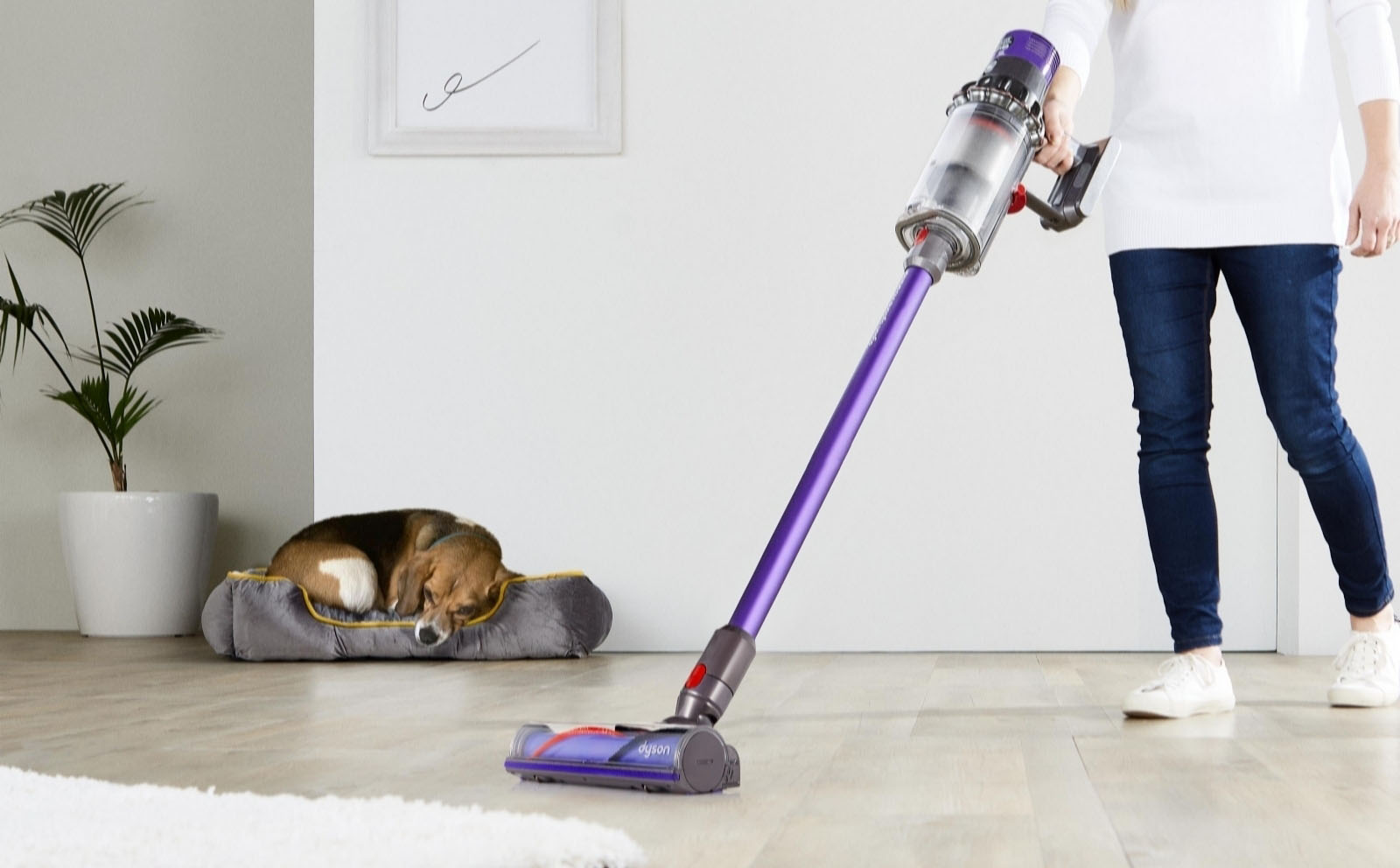 So, I’m back to work with a bang, but not actually on this weekend when we have a great offer from Dyson. The V10 has been a Today’s Special Value before, but it is on its lowest price ever, £249.96 and on 4 interest-free Easy Pay interest-free instalments, and it’s already available on our website. 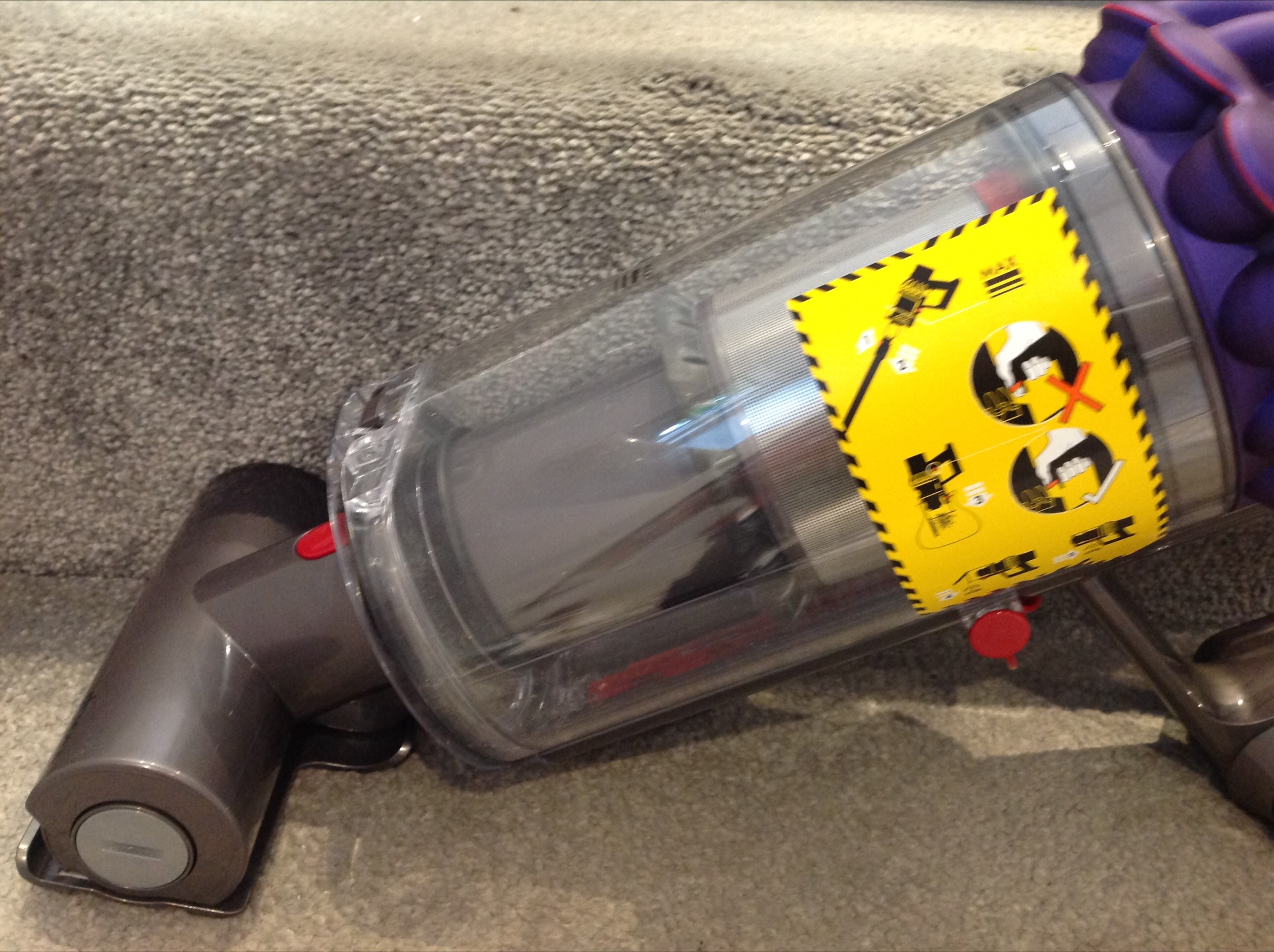 It includes two filters, which I think is a brilliant idea, as you don’t have to worry whether the washed filter is completely dry if you need to use the vacuum. I hadn’t tried the V10 before, but I gave it a little go at home and it’s more powerful than my current model and also has three levels of power.

On maximum suction, it gives up to ten minutes run time, but it’s up to an hour on the lowest setting. It’s fabulous if you have pets… we’ll be pet sitting Wilfie again soon so it will come in very handy! 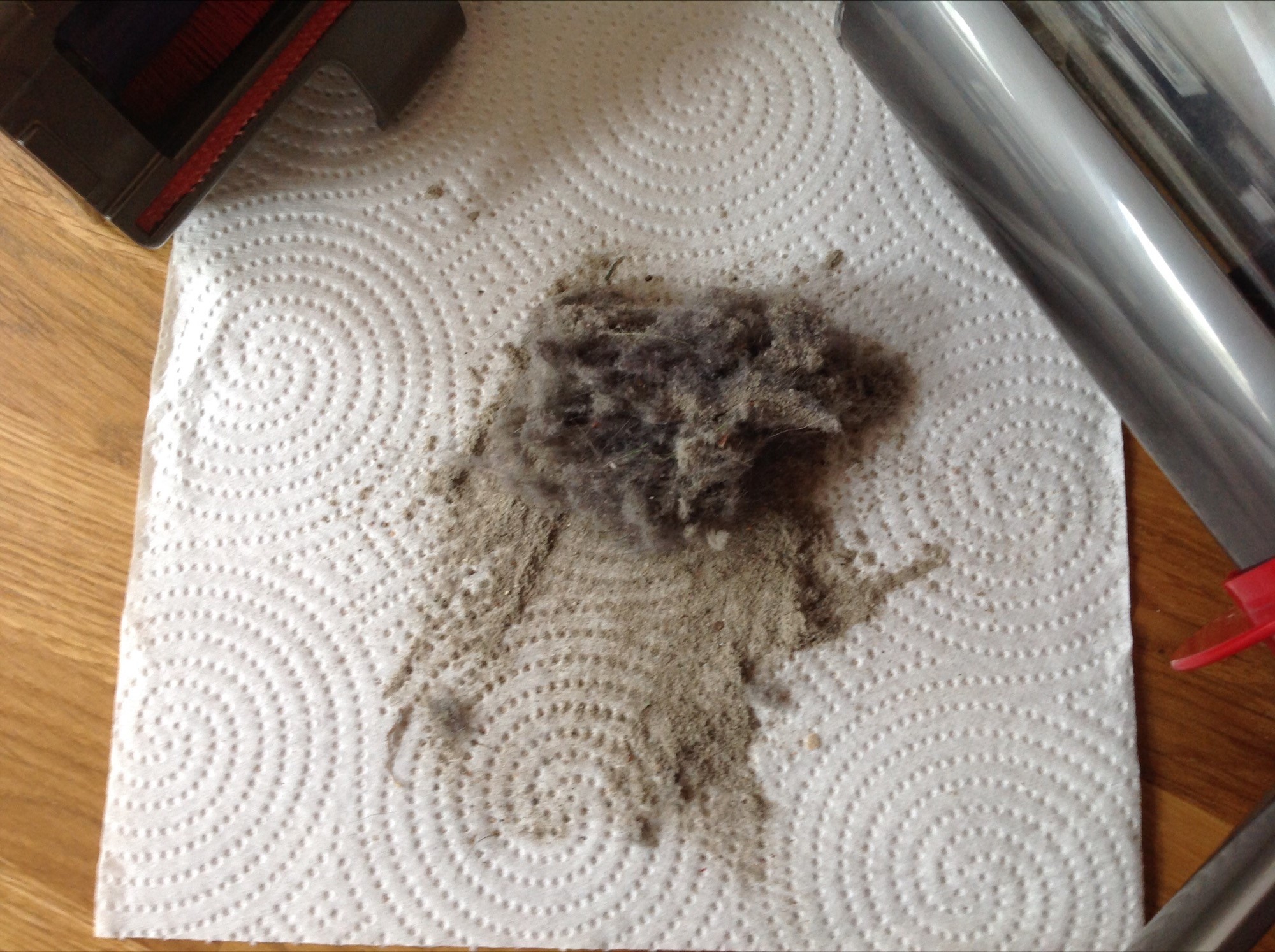 Well, I must close and head into work. Have a great weekend and remember to watch out for the competition on my next blog.