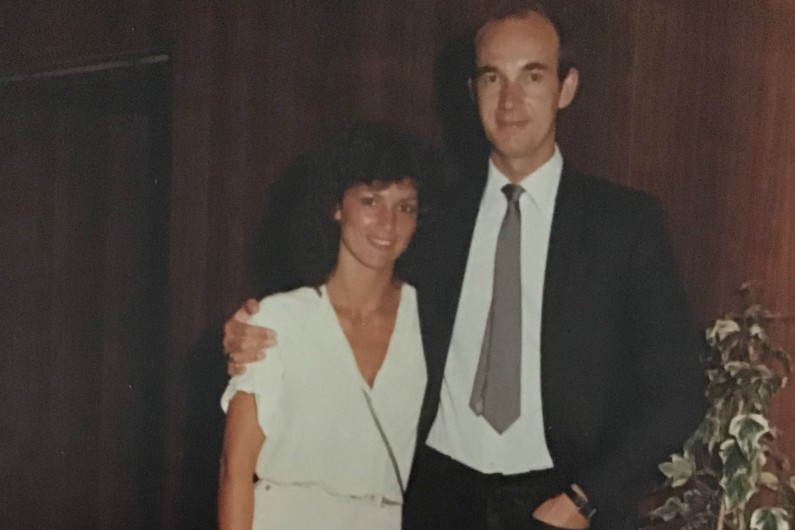 I can’t believe it’s December already – where has this year gone? It actually seems to have flown by, but maybe that’s because I’ve crammed even more into it than I usually do… and to be honest, I cram in a lot anyway. On that exact theme, I was delighted to be interviewed for an article in this month’s Berkshire Life magazine along with two other ladies for whom this has been our most successful year yet. It makes me want to go and have a lie down when I read about how much has happened this year – preferably on a beach somewhere hot!!!

I’ve had a few pieces written about me in various publications this year and the latest journalist I have been speaking with asked me for a photo of Chris and I in the early stages of our relationship, as well as for some of our recent wedding photos. I sent her this one (apologies for the grainy quality), which was taken on board the SS Canberra circa 1982 when I went along as a guest because Chris was playing in one of the bands… we look soooooo young!

The same journalist also asked for a photo of us with the children when they were little. This has proved very difficult as one or other of us was always holding the camera! The beauty of phone cameras and selfie sticks – nobody gets left out.

So last Sunday was December 1st and in the midst of frantically trying to make the deadline for my next book, I made the Christmas cake. It’s a tradition in our house to all have a stir of the mixture before it goes in the tin and make a wish. Unfortunately, Sophie couldn’t make it on Sunday because her step-daughter had a dancing competition but the rest of us all gave it a good stir. The house smelled amazing for the rest of the day! It’s wrapped away now, soaked in brandy, until I marzipan and ice it on Christmas Eve.

We also got out the advent calendars. My husband is not the biggest fan of chocolate so I spotted a cheese one (he loves cheese) online and it’s been living in the fridge in its cardboard outer wrapper for nearly a month with the words ‘Do Not Touch’ on it.

Judging by the surprised look on his face when I handed him the box, I don’t think he’d had a peek inside. It’s such a good idea for cheese lovers – QVC should do one for next year… I’m going to suggest it. The one thing I didn’t spot was that there are also ‘cheesy jokes’. Fortunately, he’s kept them to himself, along with the cheese, if I’m honest!

Of course while I’ve been manically writing, it has been very busy at QVC with lots of fabulous Christmas offers. On the subject of that ‘dancing show’, I was very upset to see Alex go – she didn’t choreograph the routine!! Anyway, back to the offers. We have another amazing weekend coming up, including a brilliant offer from Gtech, and an hour of the Dyson Airwrap tomorrow morning from 11 a.m. I’m also now presenting the Radley handbag show at 1 p.m. – handbags are such a brilliant Christmas gift idea… hint hint family – due to presenter sickness; there’s a lot of it around at the moment, so remember to take your vitamins.

Then Sunday is Beauty Day. We have a brilliant Today’s Special Value from Tarte – a sparkly box with a top layer containing four separate eyeshadow/blusher palettes. They are magnetic, and you fix them into the holder, which you’ll find in the pull-out drawer of the sparkly box… along with a lip gloss, mascara and Shape Tape Concealer in your colour choice. It’s already available online and is going down very well.

I’ll be with you bright and early on Sunday morning at 9 a.m. for an hour featuring not only the Tarte TSV but also Elemis and much more. I then have Tweak’d at 10 a.m. and I’m launching Italian brand Perlier at midday. I’ve been researching in preparation for my show and I must say I like the sound of them. They are based near Turin and grow their natural ingredients in 150 acres of pesticide and insecticide-free land. They have an 80 year heritage and the products I have tried so far are lovely and my sensitive skin has been fine – please do patch test any new beauty products before you use them, as any of us can react to anything.

Whilst on the subject of amazing beauty deals, we have a brilliant Molton Brown Today’s Special Value coming up on Thursday – perfect for separating into smaller gifts or giving as one BIG treat!

Just to go back to last Sunday for a moment; my son and his girlfriend went to see MY favourite film, Love Actually, shown with a live orchestra. Funnily enough, Alison Keenan was also there with her hubbie, Colin… I am definitely going if it’s on again next year. Anyway, the reason I mention it is because we presenters were asked to do a little ‘festive filming’ for your amusement. I was paired up with Debbie Flint and we were asked questions about various Christmas topics – we had thirty seconds to answer. The first topic was Christmas films – please watch, it was very funny!

I wasn’t much help, was I? But I like to think that my late rush at the end won Debs and I the task. I’ll post another one next week.

So, before I dash into work (almost named a reindeer there – another of the festive video questions), I just wanted to give you a quick heads up on a new promotion called Five at Five. It will be at five o’clock on Friday, Saturday and Sunday and will feature a specially selected item on five…. yes FIVE easy interest-free instalments. Join me for Fashion on Friday today to find out what it is.

Hope to see lots of you over the weekend,
Much love,
Julia xx