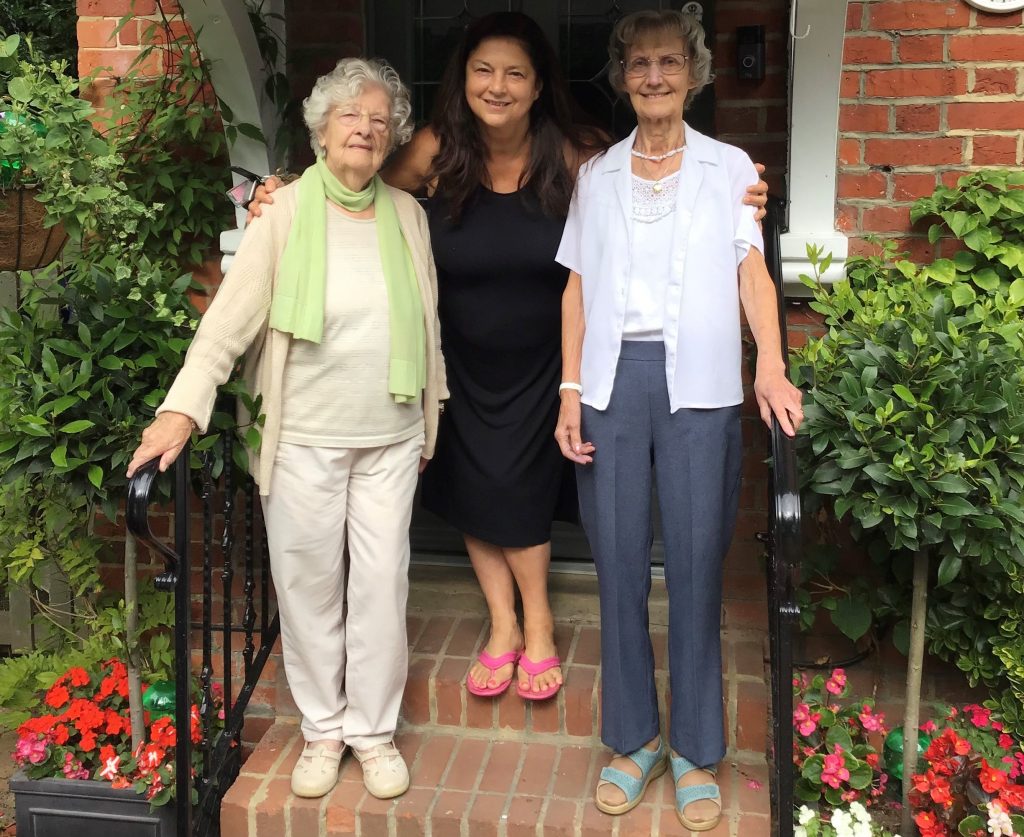 I may have mentioned in my last blog that we were hoping that both Chris’s mum and my mum would be able to come down for a few days for a visit during the summer months. They’ve previously been to our house at Christmas and at Easter, but not in the height of the summer and so have missed seeing our garden in its full glory. Because of their ages, eighty-seven and ninety-five respectively, it is mostly the thought of the two-and-a-half-hour car journey that is so daunting, but I always leave the arrangements very ‘loose’ so that they don’t feel any pressure. It certainly did the trick, as Chris fetched his mum from Spalding, and our son fetched my mum, Jojo as all her many grandchildren call her, from Nottingham and they were both happily chatting on our sofas in the family room when I arrived home from QVC last Friday. 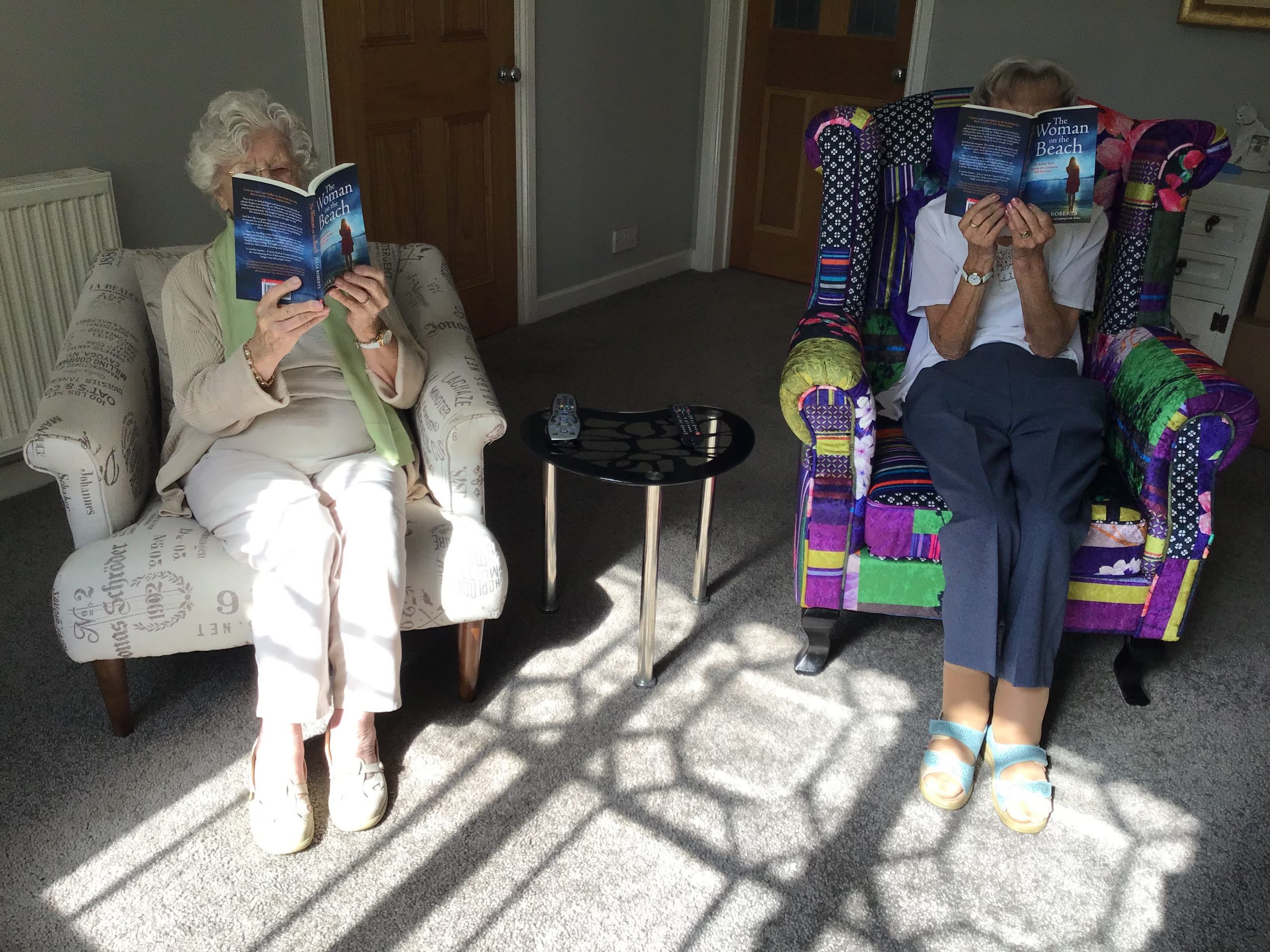 It has been lovely having them to stay, particularly as my new book was published the day before they arrived, so they have had something to keep them occupied (more on my book publication day later) when we’ve been busy with routine chores. They’ve also spent plenty of time walking up and down our garden, getting their vitamin D and both remarked how different it now looks from when we moved into the house seven-and-a-half-years ago. 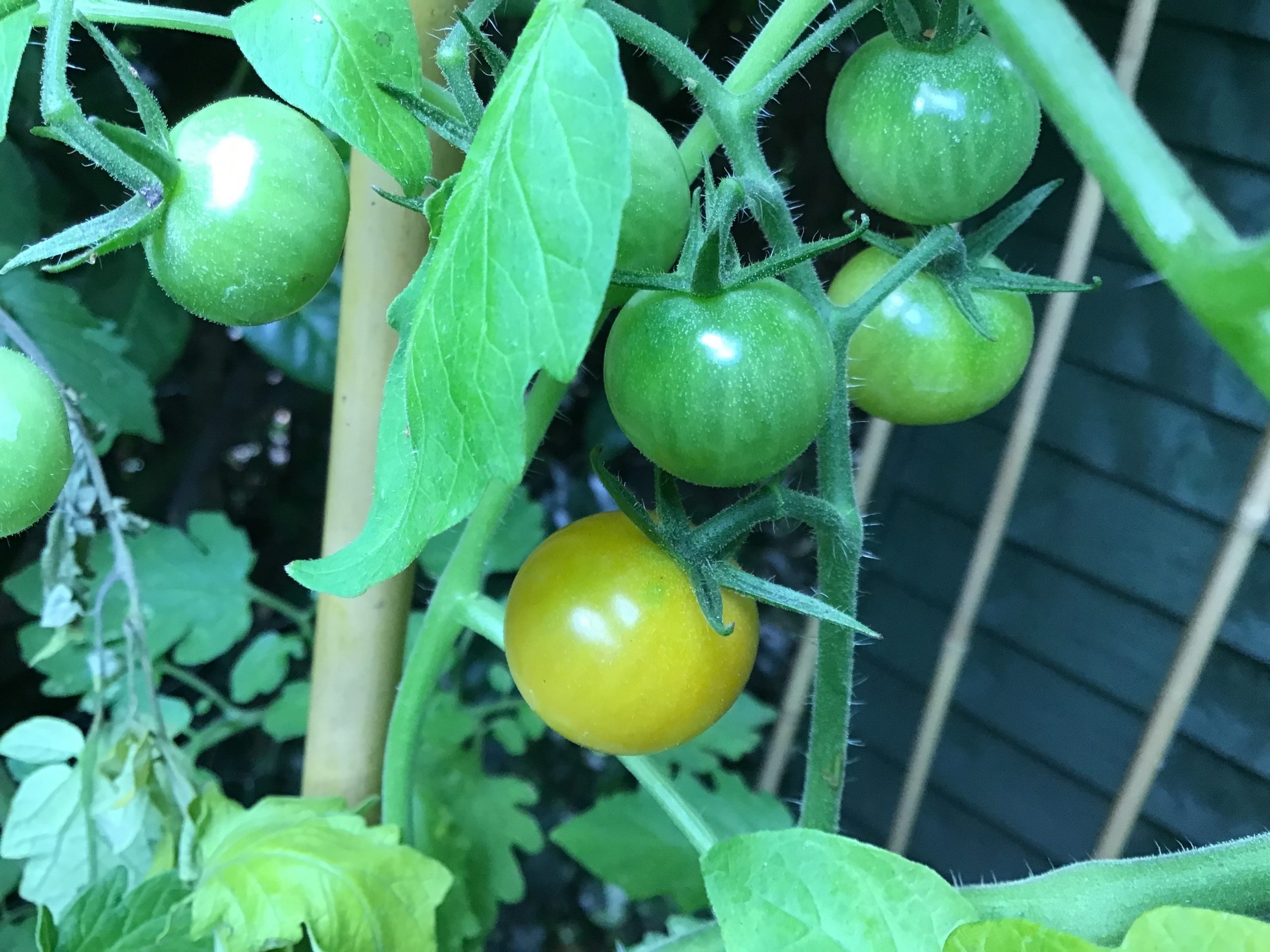 Just as a quick aside, I thought I’d share a photo of my first ever home-grown tomato approaching ripeness. They are planted in a spot that catches a lot of morning sunshine, so I would have hoped they would have ripened sooner, but let’s face it, there has been precious little hot summer sun this summer!

My runner beans are also starting to form. There aren’t masses of them, but they should be big enough to pick in about a week or so… quality not quantity. 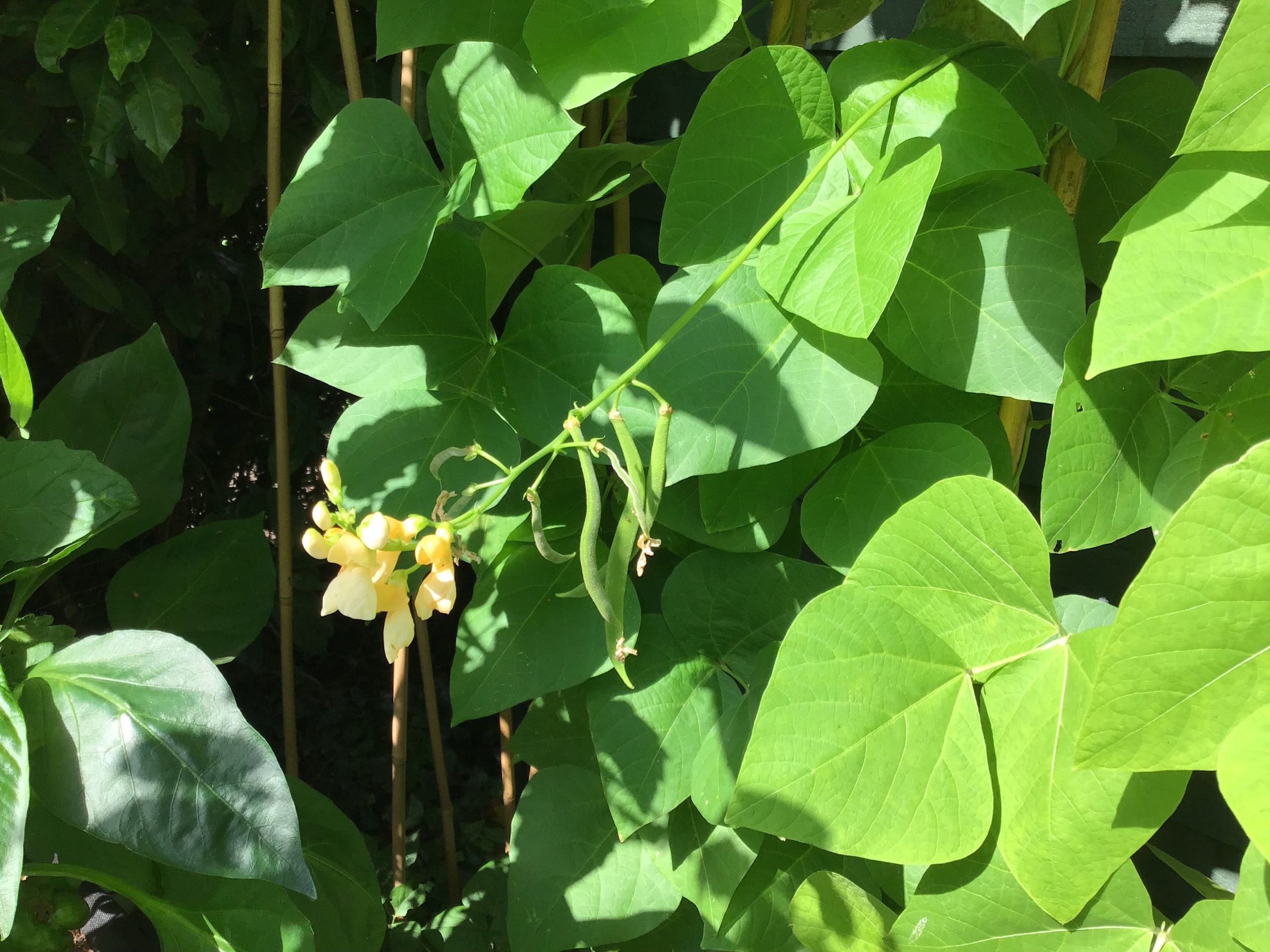 My mum isn’t a huge fan of television, apart from QVC of course, but we have managed to tempt her with recordings of The Chase after dinner before settling down to play dominoes, something we would never normally do. They are both pretty competitive to be honest, although we’ve all struggled to see some of the ‘dots’ because this was a set we bought our children, now in their thirties, when they were learning their colours and how to count. It’s amazing how similar a blank and a four can look in dim lighting… or maybe that’s just my eyes. I won’t even go there… I’m still having vision issues, which is why I was missing from the Butler & Wilson Anniversary show yesterday, which I’d really been looking forward to. By the way, we deliberately put the dominoes in the box haphazardly to drive a certain member of the family crazy! They know who they are!!! 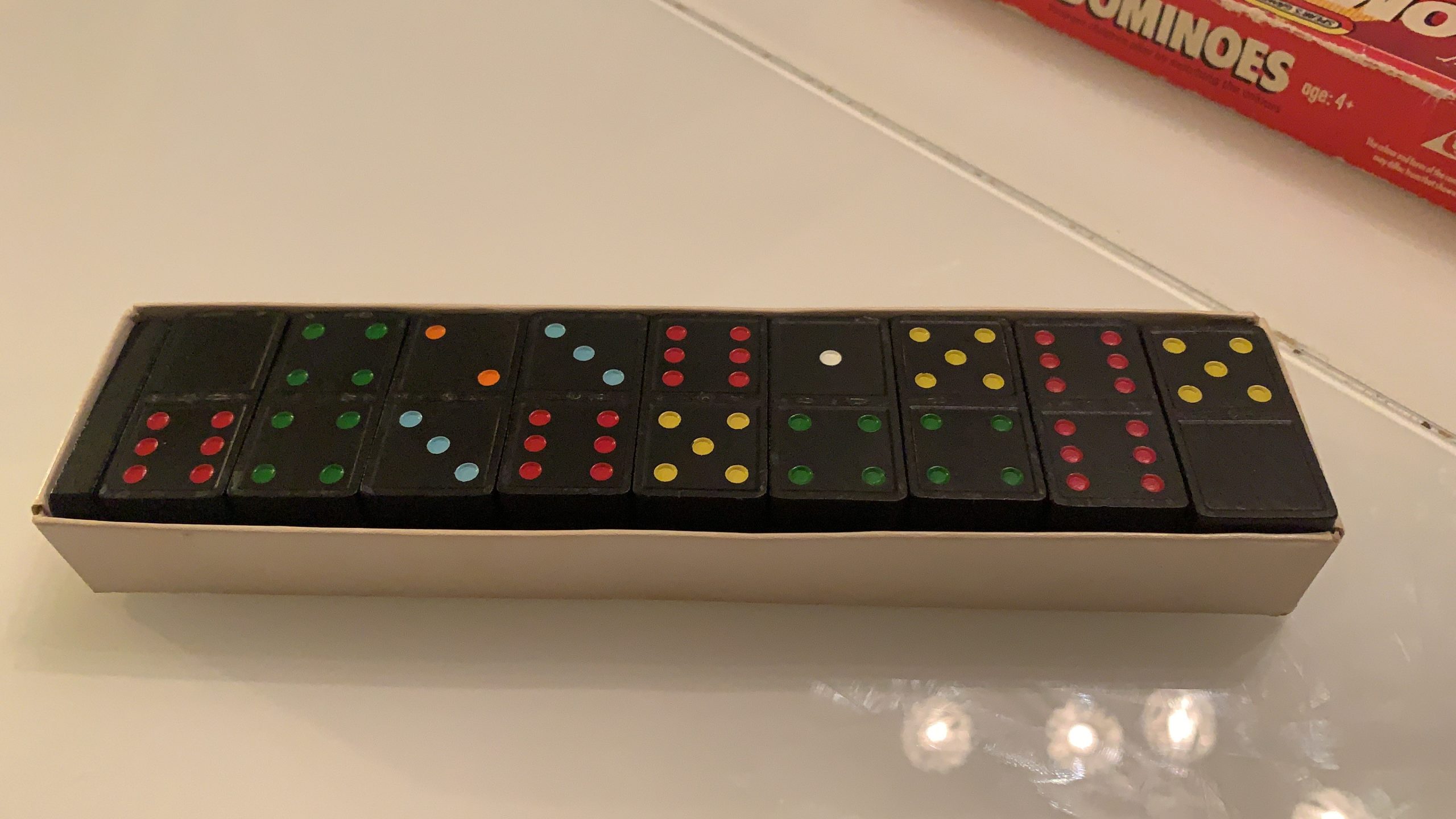 We’ve also been able to take our mums to see both of our children’s new homes and their puppies, of course. I think these are the memories that will sustain them in the long winter months ahead. 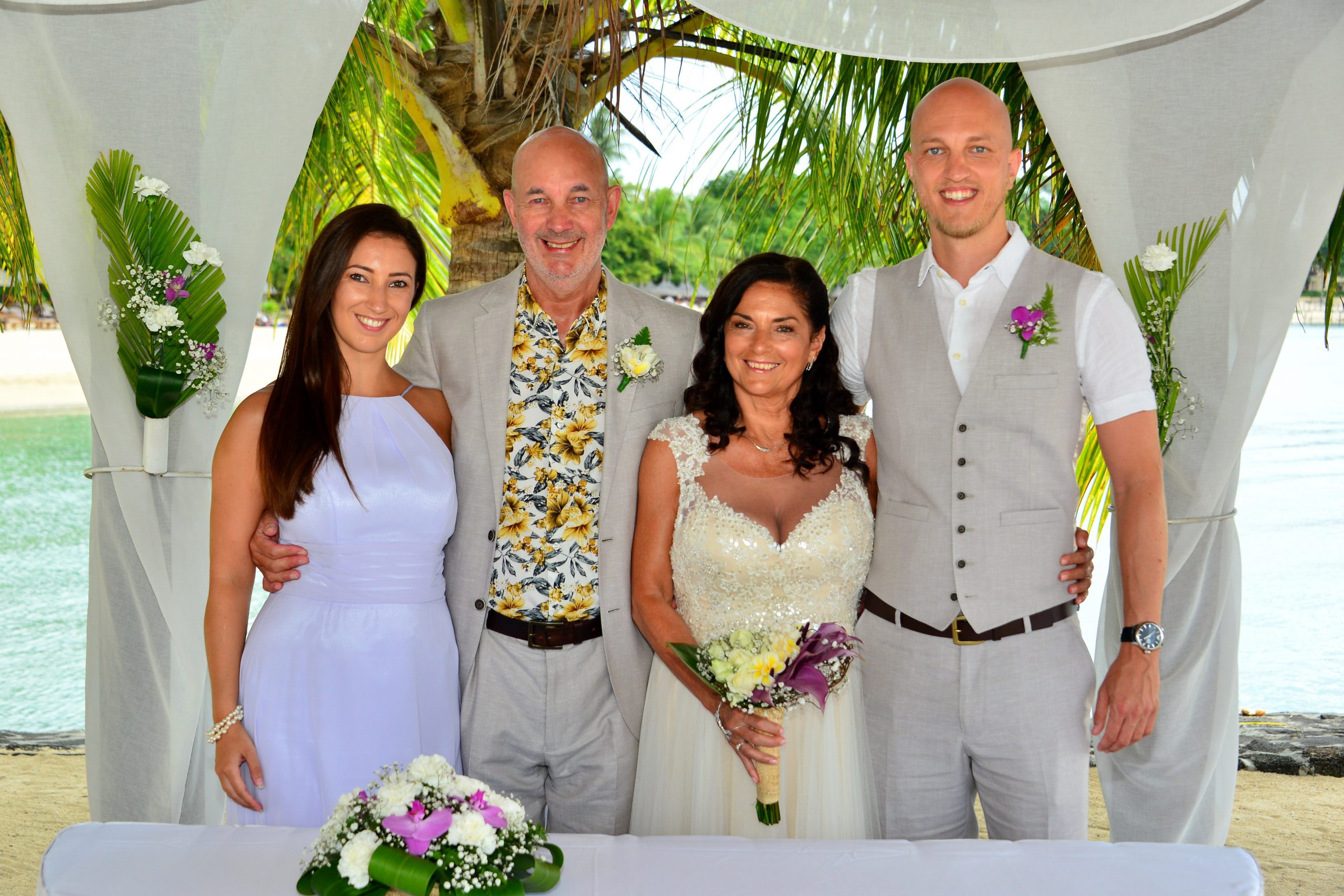 Of course, one memory that neither of our mums could experience first-hand was our wedding in Mauritius. Today is the second anniversary of that, so I thought I would share a couple of photos for those of you who missed them at the time. Our son was Chris’s best man and also walked me down the aisle (well, technically a red carpet laid out on the sand) and our daughter was my maid of honour. I love this photo of the four of us, which I will eventually get around to framing, probably for the family room wall. 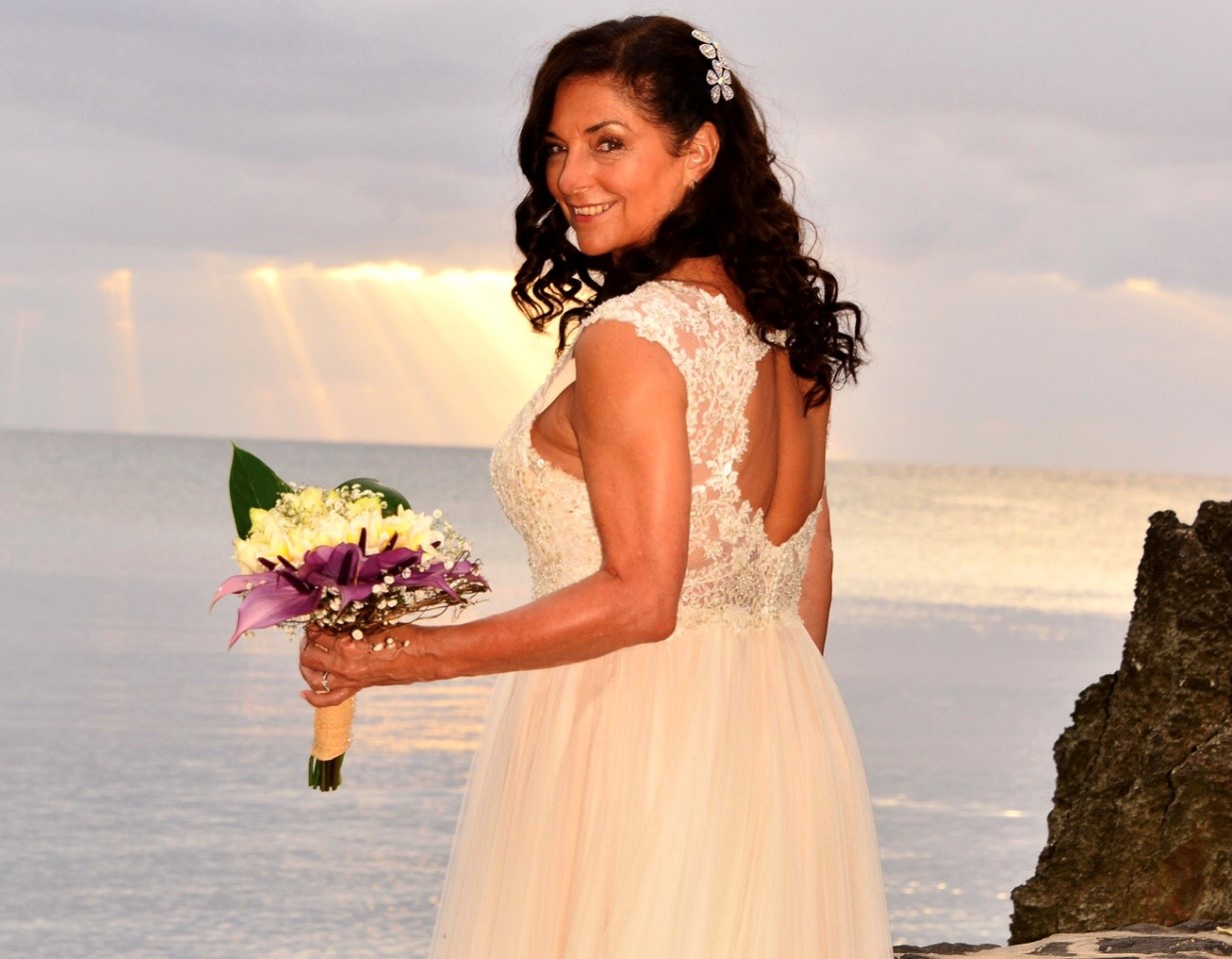 Sophie had styled my hair on the day (first time ever with no practise run!) and this photo clearly shows the Butler & Wilson hair-slide that I wore along with a beautiful ‘panja’ bracelet from his collection, so in a way, Simon was there on the day, which felt right – after all, we’ve known each other now since his first show on QVC twenty-six years ago. 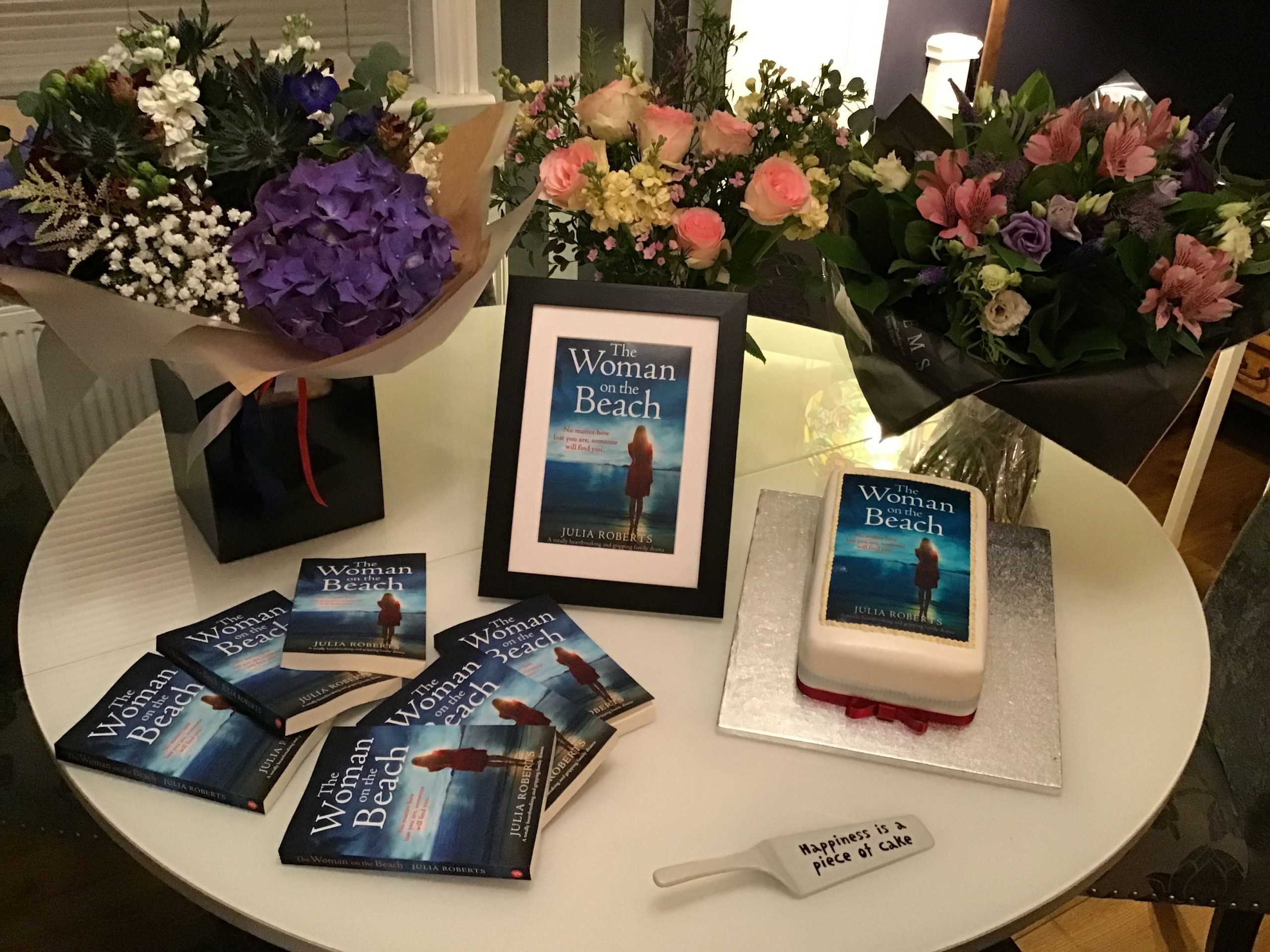 As I mentioned earlier, it was Publication Day for my ninth novel, The Woman on the Beach, the day before our mums arrived. I had some beautiful flowers from my family and my publisher, and Chris had the now traditional cake made featuring the cover of the book. So, although the mums missed Publication Day, they certainly had a share of the cake, which actually lasted until Monday, even sharing it between ten of us! 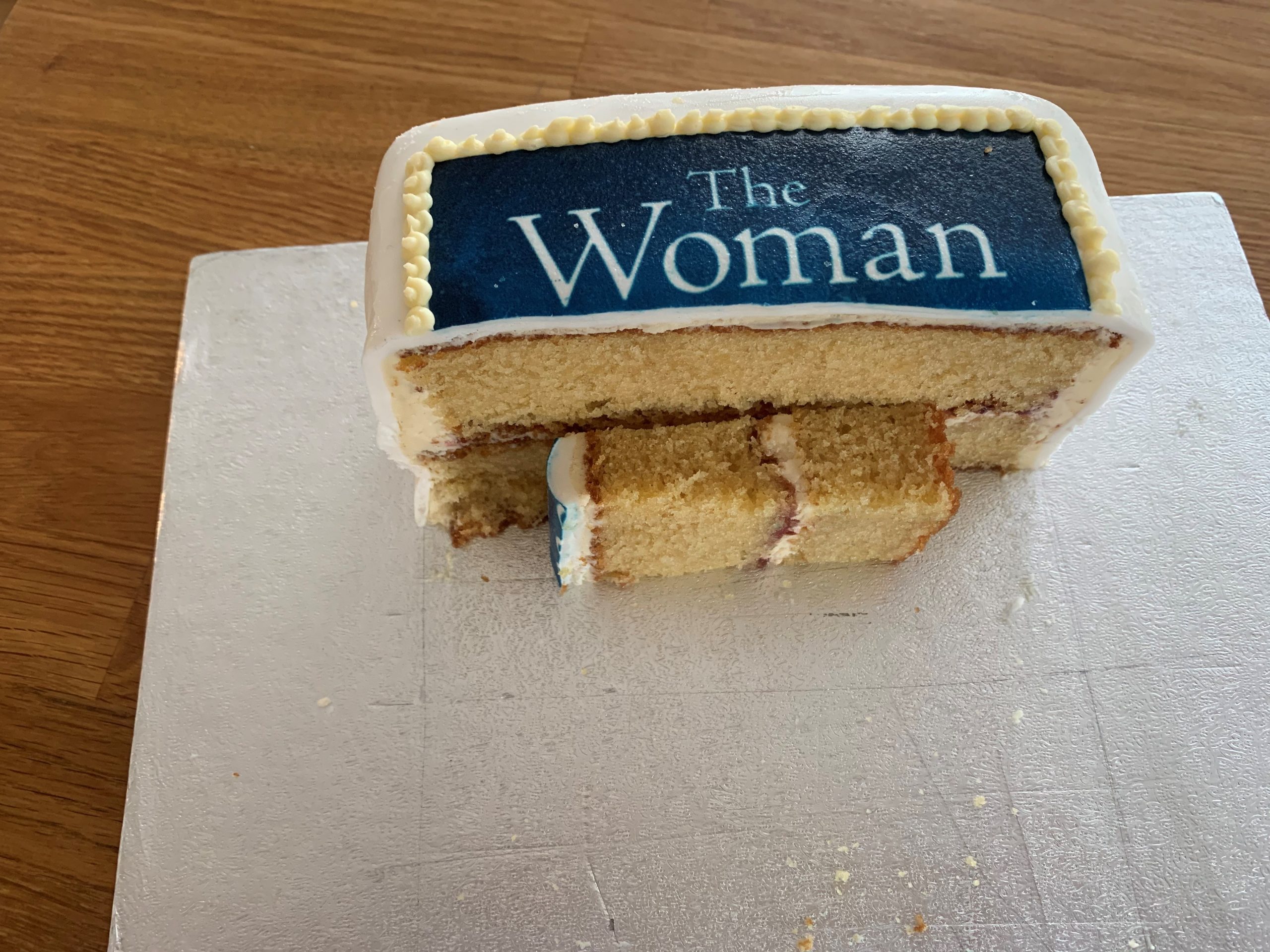 Thanks so much if you’ve bought the book – it’s had some truly amazing reviews and has spent the week since publication just outside the top 100 in the main ebook chart. I did a Facebook Live last night on my page JuliaRobertsTV, reading the first couple of chapters, and my mum made a guest appearance at the end – I’m pretty sure it is on my timeline if you wanted to have a look – because she has stayed on for an extra couple of days, while Audrey returned home on Wednesday. 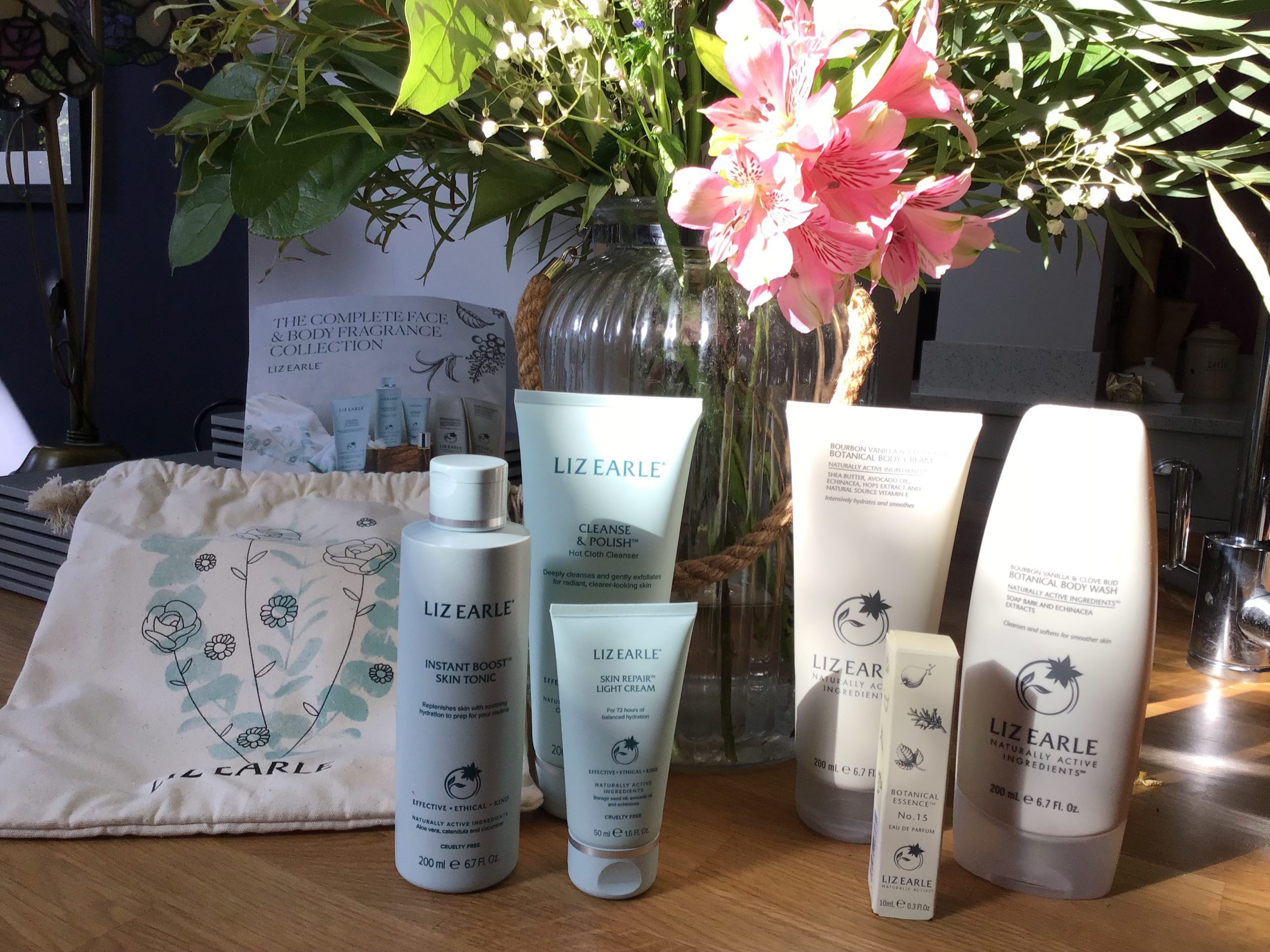 Speaking of mum, her favourite skincare range is Liz Earle, which just happens to be the Today’s Special Value this Sunday. It’s already on pre-order, but if you haven’t seen it yet, it stars the basic three cleanse, tone and moisturise but most importantly (for me anyway) the Bourbon Vanilla & Clove Bud Body Wash and Body Moisturiser, and also a boxed No.15 fragrance in the convenient handbag size. As usual with our Today’s Special Values on QVC, the price is VERY good, so I wouldn’t leave it too late in the day to order if you don’t want to miss out.

I won’t be in for Fashion on Friday today as I’ve taken the day off for our wedding anniversary. And we have more celebrations on Monday as it will be Chris’s birthday… he will be sixty-seven, but don’t tell him I told you!

Let’s hope the weather picks up for us all to enjoy a sunny Bank Holiday weekend.