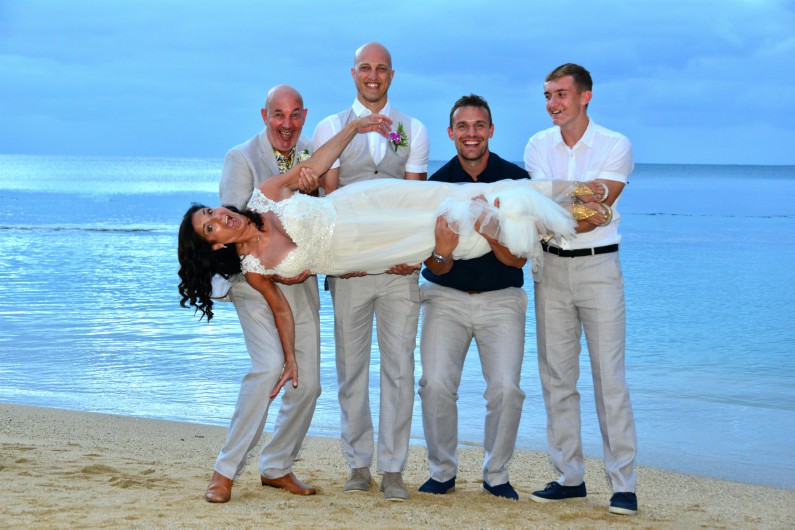 We’ve been back from Mauritius for almost two weeks now, but it feels more like two months if I’m honest. Today will be my eighth day on air out of nine so I am really looking forward to my five days off before my next run of QVC appearances. I promised you more wedding pics this week and there are some later in the blog, but I think my favourite wedding photo has to be the one above, which was taken approximately two seconds before I hit the sand – the expressions on all of us are priceless! As I say, more wedding stuff later in the blog.

In fairness, I did have Tuesday off, but instead of relaxing I had a catch-up meeting with my editor at Bookouture regarding book three in the Rachel Hart series, from which I had to rush home to prepare dinner for seven. I had invited two friends over (we have been trying to organise a dinner with them since we moved to our current house almost six years ago… I kid you not) and Sophie and her boyfriend, Reece were also joining us. Unbeknown to me, our children were also planning to hand over our wedding present, which I’ll tell you more about later.

So, there has been plenty going on at QVC over the past week or so and lots to look forward to this weekend. If you’ve seen me on air the last couple of days, I have been wearing the Ruth Langsford TSV, which launches on air tonight at 9pm but is already on pre-order. I am not usually the biggest fan of animal print, but I LOVE everything about this tunic, not least the fact that it is in a 60% cotton and 40% viscose blend.

It’s light enough to wear right now, but perfect to layer when the winter kicks in. I’ve been wearing the Berry option (in size medium if you normally go for the same size as me), but it also comes in Blue, Grey, Khaki and Natural. I have a feeling it may go quite quickly so you may want to order early – actually I’m planning on getting another one once I can make my mind up between the Khaki and the Blue! Well done Ruth, absolutely fabulous, particularly with the zip detail at the back.

Sunday’s TSV is a 6 piece collection from Bareminerals, which again is already on pre-sell. I mentioned both of these on air yesterday as we were running a one-day £5 off promotion for purchases over £40 in one transaction. Watch out for these special flash promotions over the coming weeks as they could save you a few pounds; very handy once you start your Christmas shopping. And while we’re on the subject, do remember to redeem your voucher, if you earned one, before midnight this coming Sunday (22nd September) or you will lose it.

Two great TSVs over the weekend and a new award-winning jewellery designer, Sam Uhbi, debuts her collection designed especially for QVC on Tuesday with Katy Pullinger. It is unique and eye-catching jewellery, and if you are a glasses wearer (or buying for someone who is), this beaded glasses chain might appeal, so you never have to hear those words, ‘have you seen my glasses?’ again. There are four to choose from: cultured pearl, onyx, smoky quartz and my favourite, mixed agate. Check out our website to see some more of the pieces as they become available.

So…. what was Chris and my wedding present from our children? Sophie and Reece arrived for dinner on Tuesday carrying this picture.

It’s exactly my sort of thing… a jetty with a view out to the sea… and then I looked more closely. The two people deep in conversation sitting on the end of the jetty are Chris and I. Sophie had taken the photo without us knowing and loved it so much that she suggested to Dan that they should have it made into a print and framed. Honestly, I can’t think of a more thoughtful, personal or precious wedding present. It is already up on the wall in our lounge and we both absolutely LOVE it.

The wedding seems a long time ago now but I did promise you a few more pictures and a bit more about the day and our honeymoon, so here goes. You saw the boys about to drop me in the picture at the top, so it’s only fair to show you the girls, including my friends Teresa and Natalie, and Sophie’s stepdaughter, Amber.

And here also is a picture of our whole wedding party.

These photos were all taken by the official photographer who you can see slipped into an unofficial photo of Sophie with our wedding cake (it was a sponge marble cake – very tasty).

After we had finished having all the photos taken, we went up to the ‘posh’ restaurant at the Maritim resort, Chateau Mon Desir, for our wedding dinner. Excuse the quality of this photo, but I thought you would like a flavour of the evening, which started off with a toast of the champagne very thoughtfully gifted to us by Jill Franks and her fabulous husband who we all know and love almost as much as Jill does!

The food was delicious and I loved the way the main course arrived covered with silver domes which the waiters then removed ‘in sync’ to reveal our meals. The ‘best man’ speech, delivered off the cuff by our son Daniel, brought a lump to my throat – I hope he meant all the lovely things he said. I really am so incredibly proud of the people our babies have become.

The evening continued with music and dancing (me still in my wedding dress) until we finally retired, exhausted but so very, very happy.

The following day could have been such an anti-climax, but no… Daniel and I decided to go para-sailing, something I have always wanted to do. I’m not going to lie, I was a bit nervous but it was so worth conquering my fears to float in the air a hundred metres above the boat – so peaceful, calm and other-worldly. Sophie really wanted to do it too, but Reece was not so keen – I think she persuaded him by pointing out that her sixty-three year old mother had done it! I’m not sure he enjoyed it exactly but it’s something to tick off the bucket list.

The day the others were coming home was also ‘my husband’s’ sixty-fifth birthday, so we all gathered for a birthday/farewell lunch before we headed off to our honeymoon hotel, the Zilwa Attitude.

It was quite a different vibe from the Maritim and initially I was a bit disappointed, but it didn’t last long. They had decorated our room, which was right on the beach, with rose petals on the sofa and bed – very thoughtful. I loved swimming in the pool and as you can see, the view from my sunbed was pretty awesome.

We had a lovely week with just the two of us, mostly just sitting around reading and relaxing and enjoying the different restaurants in the evenings – bliss! We did get chatting to a couple in their twenties, Steph and George, who were also on honeymoon. We were admiring each others wedding photos and I asked Steph how far in advance she had ordered her wedding dress – she replied, ‘a year, how about you?’ She almost choked on her drink when I said four weeks!!!

Well, it’s back to real life now and although I have a few days off there won’t be much time for R&R as I have another book to get written. Oh, and we’re also off to the theatre on Wednesday to see BIG The Musical, which was my birthday present from the family – I’ll tell you all about it on here next week.

Enjoy the weather while it lasts!
Much love,
Julia xx