I Love Skechers! Can you tell? 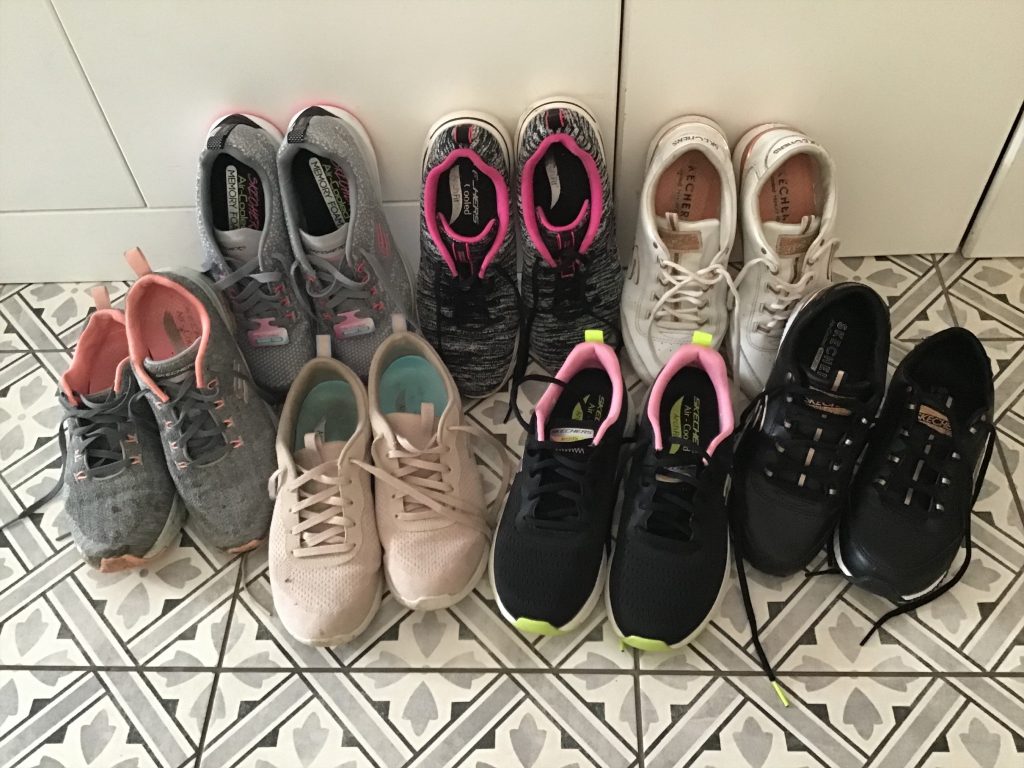 We have a Skechers Today’s Special Value today on QVC and as you can see from the above photo, I’m a huge fan of the brand. Not only have I got this collection of trainers (plus the pink ones I was wearing when I took the photo), but I also have several pairs of boots, some sparkly toe post sandals, which I didn’t purchase from QVC, and several pairs of their fitness leggings! I’ve had some very kind comments about my recent weight loss and one or two questions asking how I’ve achieved it. The simple answer is diet and exercise… but let me elaborate.

After all the health issues of the past two years, starting with the ankle surgery and swiftly followed by the broken wrist, I’d been unable to keep up with my normal fitness regime. I’m fortunate to have my little home gym, but my ankle wasn’t strong enough for most of my Aeropilates exercises and certainly not the jumping using the cardioboard. Even walking on the treadmill was a massive effort and to be honest quite painful. Without exercise in my life, the weight had crept on, but I didn’t realise the implications until after my brain surgery, I was having a problem with high blood pressure. I hate taking medication unless I absolutely have to so was keen to avoid going on blood pressure tablets. I asked my endocrinologist what I could do to lower my blood pressure and he was quite blunt in saying, ‘lose some weight.’ Wow!

I’m not going to lie, I was a bit upset at first as the increase in weight was in part due to being unable rather than unwilling to exercise, but the next morning I started counting calories and committing to a daily exercise routine. That was mid-November and even with Christmas, Valentine’s Day and my recent holiday, I’m now almost two stone lighter and back to the weight I was for our wedding in 2019, and I feel so much better for it.

I chose not to follow a fad diet because I know they don’t work in the long term for me. I’ve stuck to between 1200 and 1500 calories a day (mostly) and exercise for a minimum of 30 minutes a day, although it’s usually an hour. I’m almost at the weight I want to be when I turn sixty-six this June (and officially become a pensioner) and when I get there, I intend to adopt a 5/2 approach to keep the weight off. Five days of being ‘mindful’ what I eat and two days more relaxed. So, to get back to my original point, I love my Skechers trainers and fitness gear for helping me achieve my weight loss… so far!

Just to return to mentioning my holiday for a moment, as well as the photo of the line-up of Ultrasun products we used while we were away, I also recorded this little video to mark their 30th anniversary – how could I miss the opportunity to congratulate them for keeping me protected in the sun from such a glorious location?!?

So, Happy 30th Birthday to Abi and Ultrasun and thanks for such great products. If you didn’t know, there is a special deal on a supersize of the Face & Scalp Mist Spray SPF 50 for the whole of April.

My son and his girlfriend are currently away on their holiday, which they were unable to take this time last year due to the pandemic. They’re in the Maldives, which is definitely on my list for a revisit. We went when our children were in their mid-teens, and they are now mid-thirties, so it’s long overdue as at the time I remember it being said that the islands may only have thirty years before disappearing into the ocean due to rising sea levels.

Of course, we packed them off with Ultrasun and strict instructions to stay out of the sun in the middle of the day. Dan’s tried snorkelling for the first time – apparently, he was swimming alongside a shark which as his mother made me panic a bit! 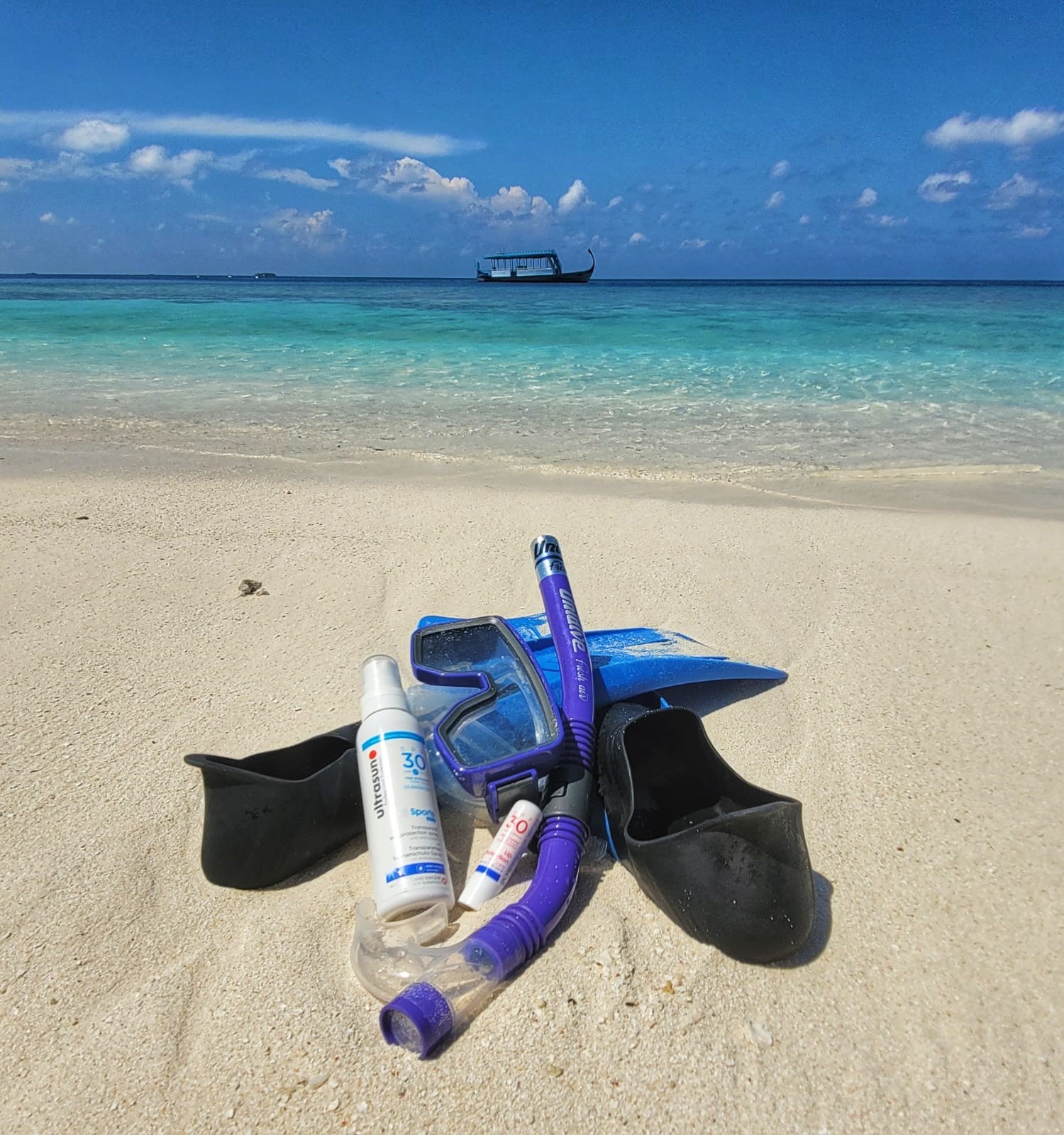 Mother’s Day seems like ages ago. Dan and Katie were with us in the morning as they’d been to see Six the previous afternoon, Katie’s birthday present, and had stayed overnight. Before I left for QVC, Sophie called in with her card, which I found very touching and also thought looked a lot like the two of us! 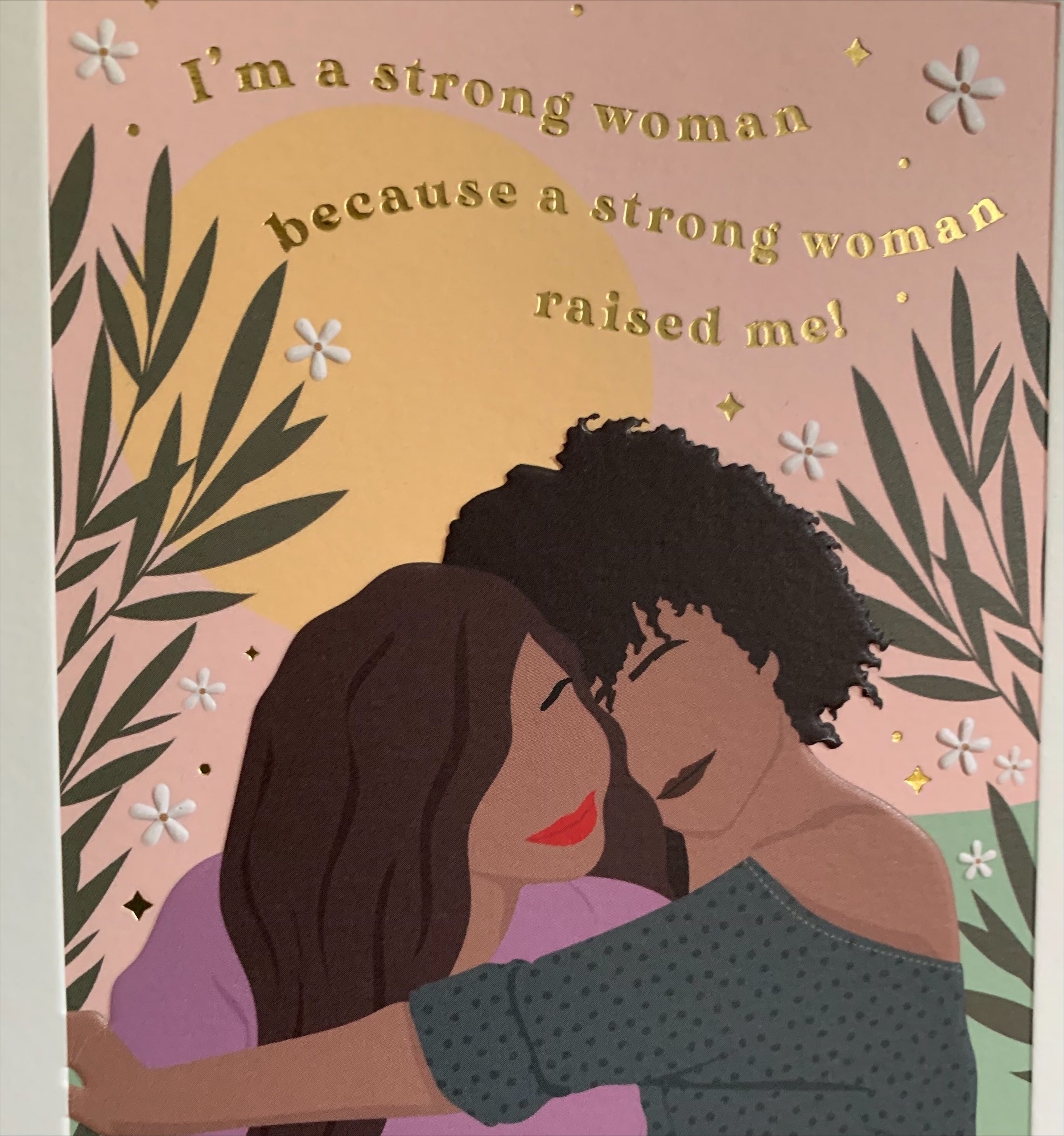 I had some lovely flowers from the children, and also these from Chris – how amazing are those colours! 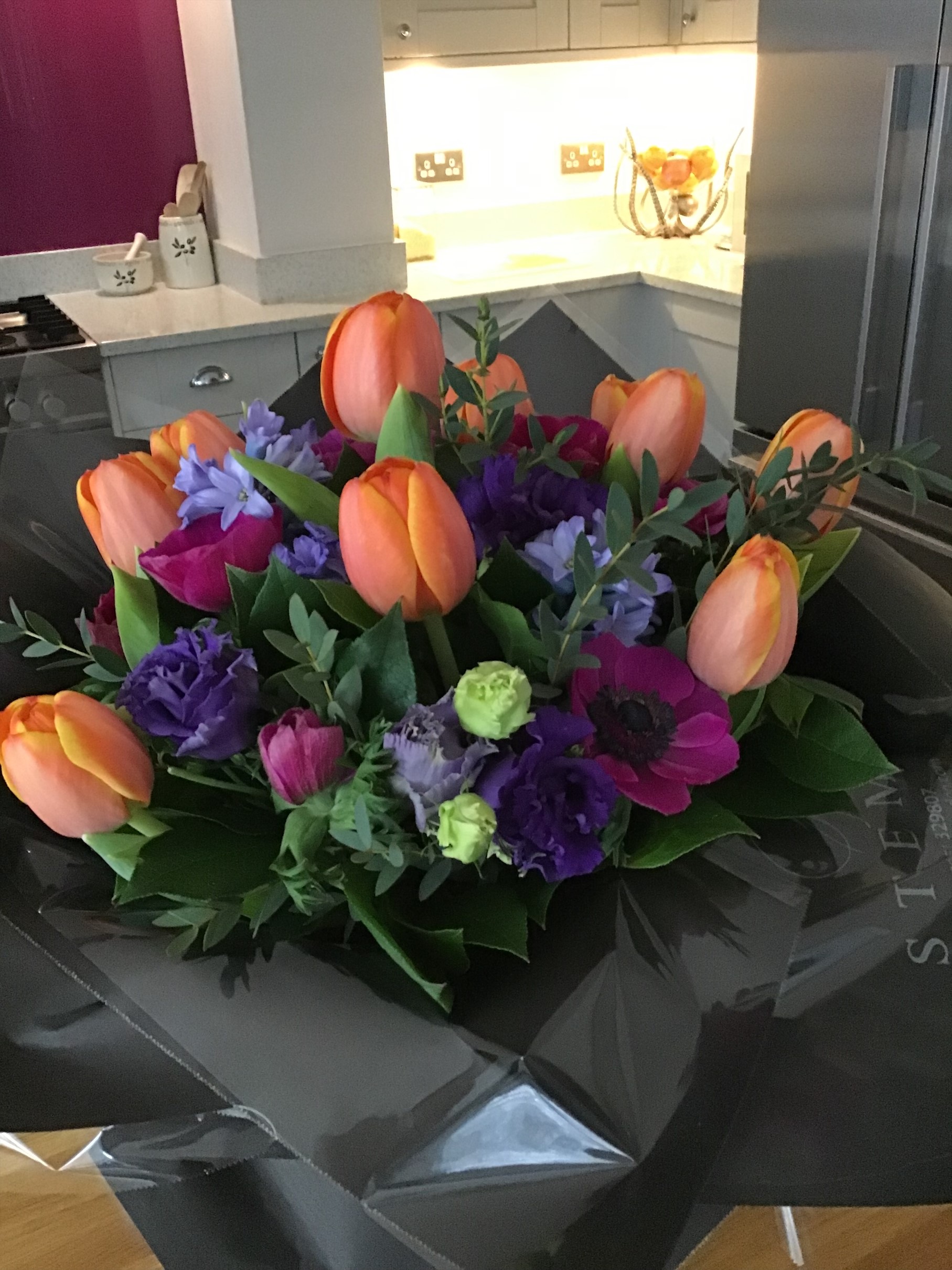 We weren’t able to see our mums as I was working, but we spoke to both of them on the phone. We know we’re very lucky to still have them both and for them to be living independently. I love this photo from thirty-three years ago with Nana (Chris’s mum) holding teddy and she and Jojo helping Sophie, while I helped Dan. That says it all really… Mum’s giving a helping hand!

We had a rather sad anniversary on April 1st. Can you believe it’s four years since we lost our beautiful cat, Poppy. She was a couple of months short of her twenty-third birthday which is an amazing age for a cat. She was certainly ready to head over the rainbow bridge, so we had to say our goodbyes. I will never forget the kindness and understanding of one of our QVC producers, Andrew, who I rang in tears at 7am to say I wouldn’t be able to make my shift that day. 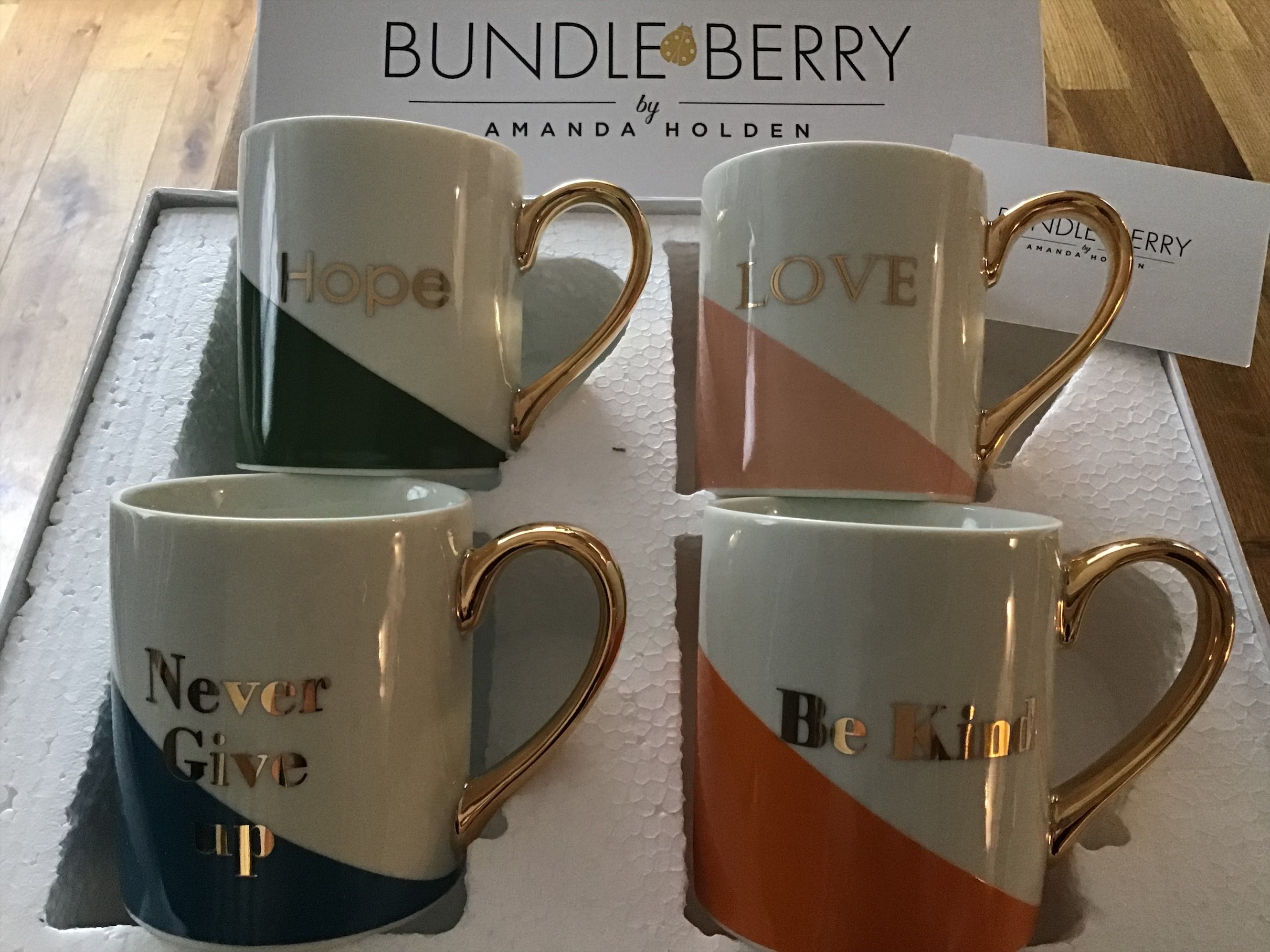 On the subject of kind, I’m sure some of you might think that I say I ‘love’ things and buy things from QVC when in fact I don’t. The thing is, I wouldn’t say it if I didn’t mean it and I totally fell in love with this set of Bundleberry mugs last time I had a show. My intention was to put an Easter egg in each mug and gift them to people however, that’s not going to happen because I love them too much!!!! I’m also awaiting delivery of the outdoor clock in Ivy Green, which was on advanced orders for the week of Easter Monday and to be honest, I’m still toying with the idea of getting the white version too for inside my gym. Sometimes, it’s hardly worth me going to work!!! 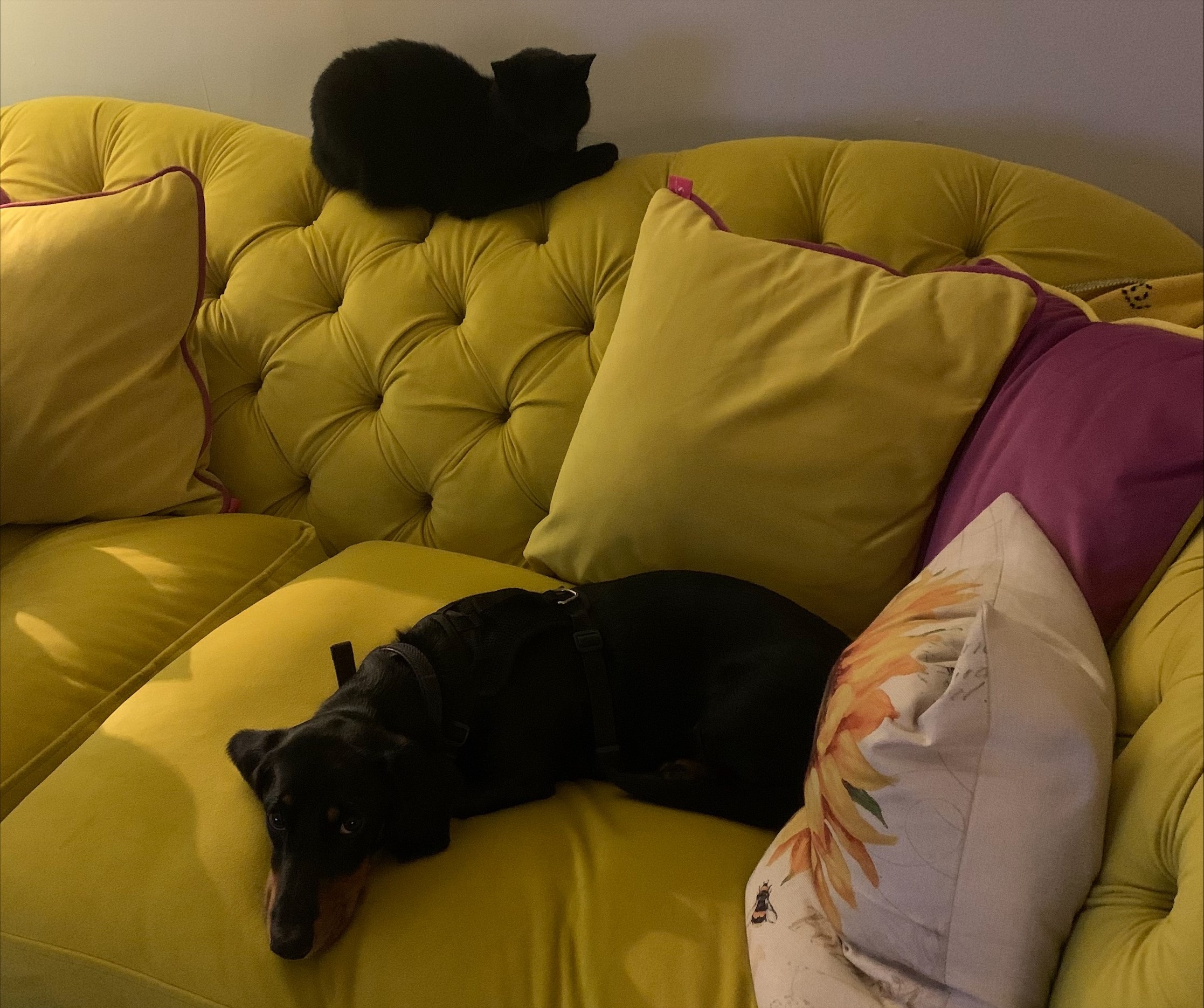 Speaking of which, I need to head off now to make my 3pm show, which just happens to be Skechers apparel! It will give me a break from looking after these two, Quin and Wilfie, while their ‘pawrents’ are on their hols! And don’t be fooled, they don’t actually get on too well, although they are improving.