I think you’ll find that’s mine 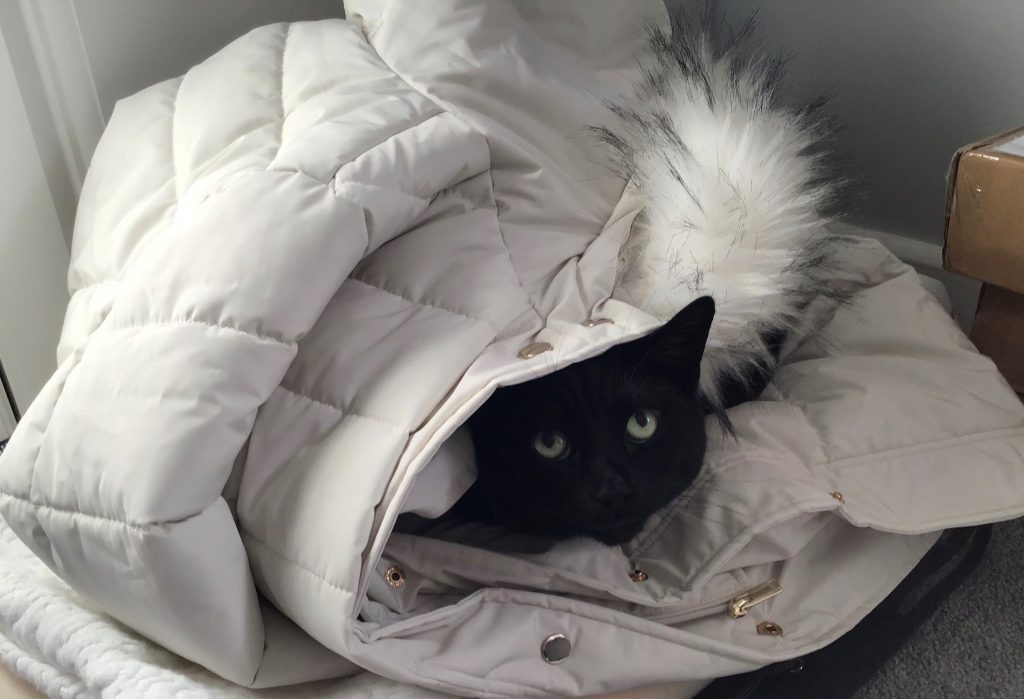 We presenters are very fortunate in that we are sometimes supplied with samples in order to take our own photographs for blogs and social media. I’m particularly happy when it is a product from a brand I truly love, which was the case last week when a sample of the Centigrade Today’s Special Value coat for the 28th November showed up in my dressing room in a beautiful shade of winter white called Bone. I’ve bought myself a new Centigrade coat each winter for the past five years or so and am always pleased with both the look and the fit. I folded it up in our bedroom, intending to try it on the next morning, only someone beat me to it! He looks very cute, but I think it might be a bit on the big side for him. I’ll take some proper pictures of me wearing it for next week’s blog, maybe posing by our new railings.

After we had our new front door fitted three years ago, we have been meaning to get some railings to flank the three steps that lead up to it, as it looked a bit bare without. I guess it’s a bit like not filling your eyebrows in when you’re wearing eye make-up – it’s not quite complete. 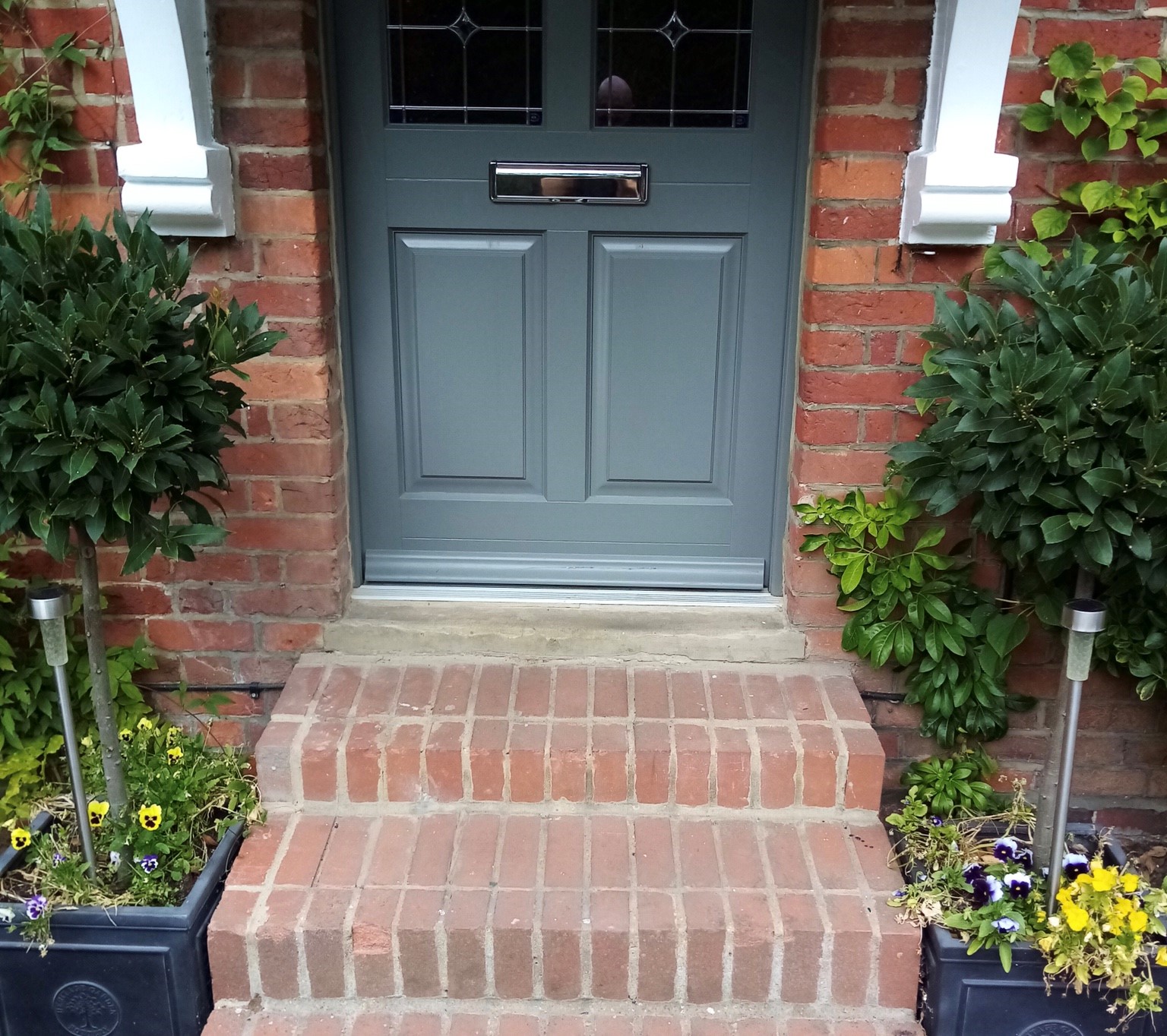 The guy came around to measure up a few weeks ago and then he had to make them. We got quite excited when he sent us this picture through of the work in progress. 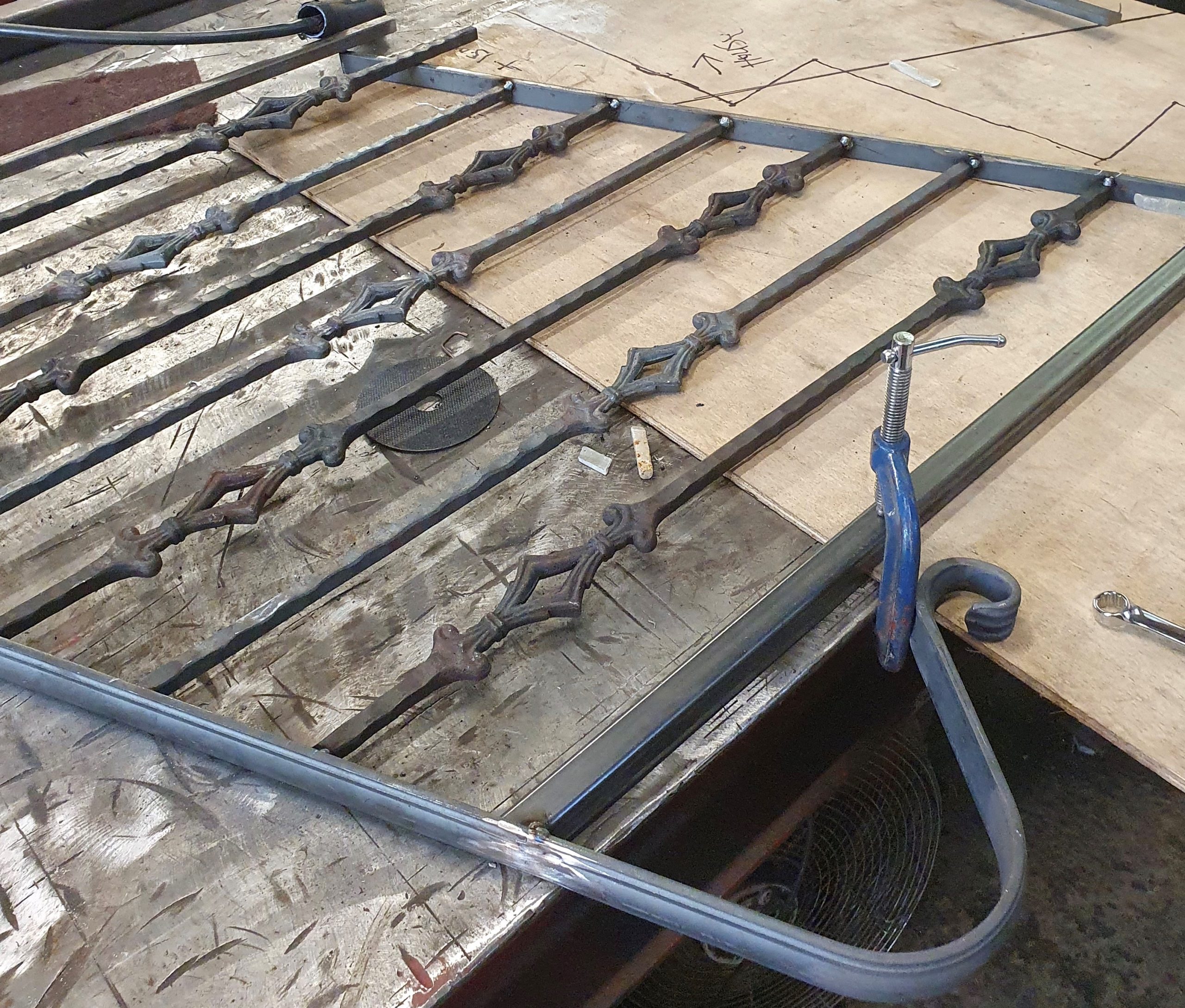 He came to fit them last Friday and I’m absolutely delighted with them and it does feel good to be able to keep people working where possible. To be honest, I could definitely have done with them when I was on crutches earlier in the year after my foot and ankle operation, but better late than never. And Mum has always wished we had some to help her climb the steps rather than having to hold on to us – she is very independent. It will be lovely to show them to her in real life, but until then she will have to make do with a photo on her new iPad. 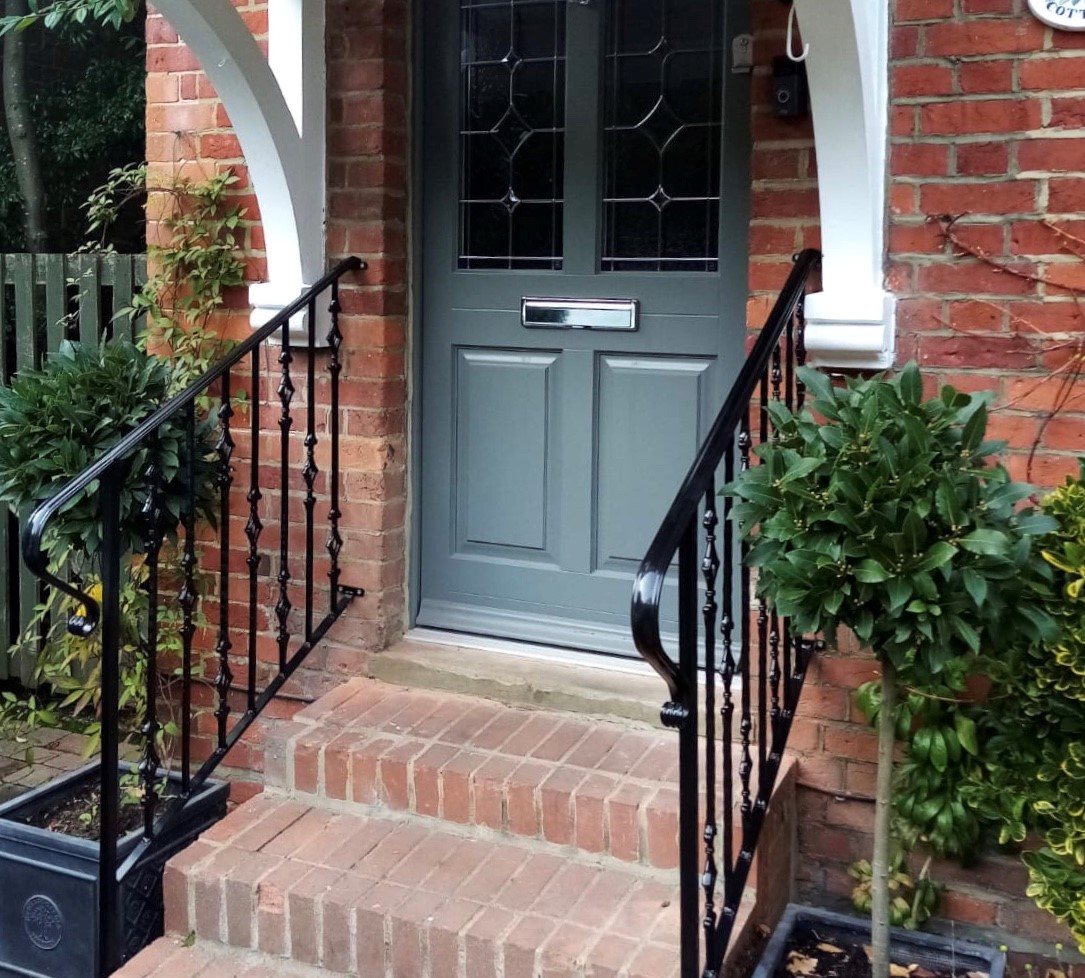 I say new iPad, it is actually my son, Dan’s old one, which he put back to factory settings before we sent it to her so that we will be able to do Facetime calls with her. The practice one went very well last week, so I’m looking forward to being able to see her as well as hear her for some calls. Big thanks to my husband, Chris who wrote out very comprehensive instructions and even drew diagrams!

This is going to be a difficult weekend for us. Tomorrow it will be thirteen years since we lost my dad, just six days before Dan’s 21st Birthday. It was unexpected, but I’ve always been grateful that he didn’t suffer a protracted illness. 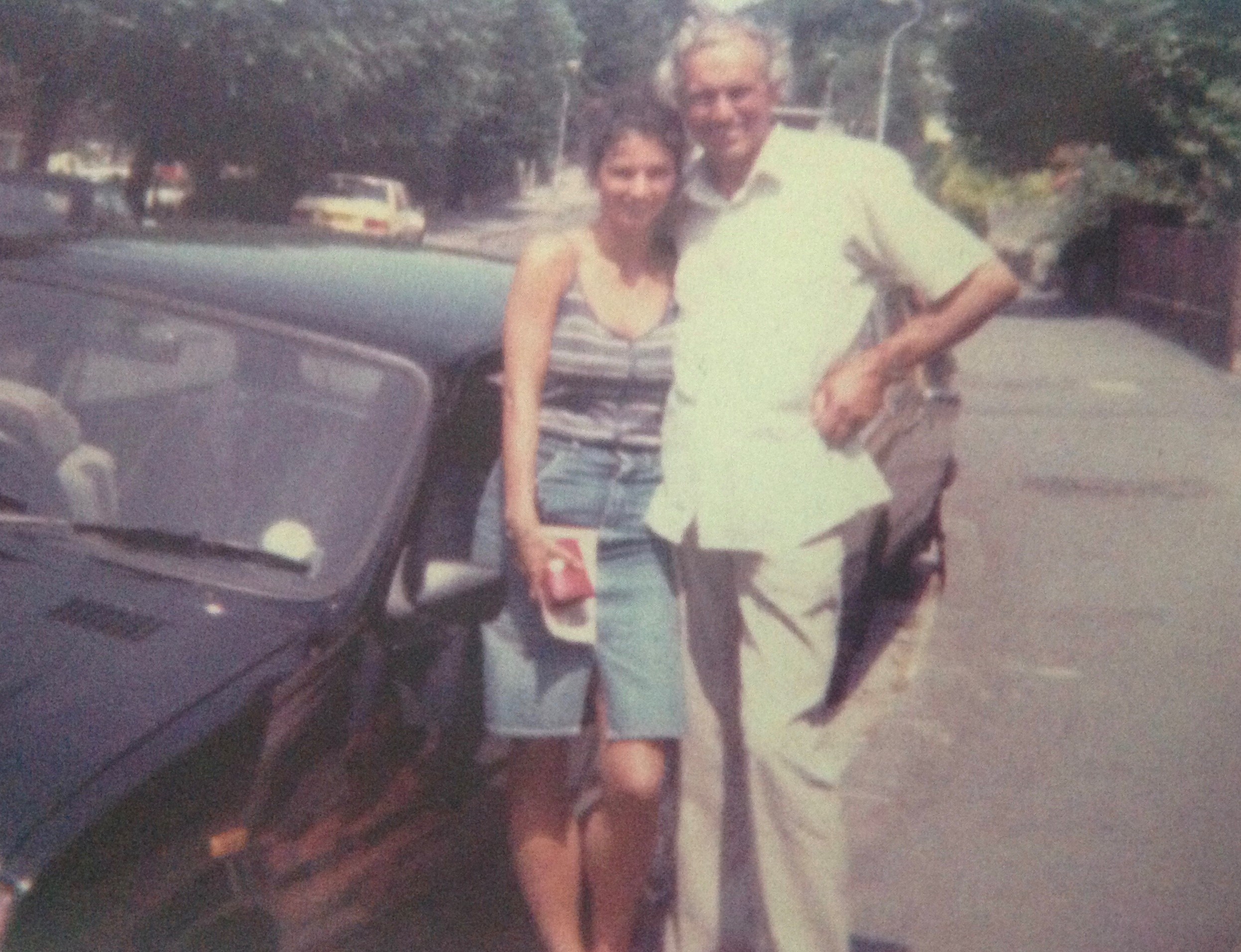 It was one of the worst days of my life and one of the hardest chapters to write in One Hundred Lengths of the Pool, which I’ll be reading more from on my Facebook page and Instagram Live tonight at 8 p.m. – remember, you get to choose the chapters. Maybe tonight someone will choose chapter 10, which is my ten favourite films. I say that because my number one film, Love Actually (replacing Gone with the Wind, which had been my fave for years) was released seventeen years ago today. I watch it every Christmas and love all the different story lines. Hugh Grant plays the prime minister in it, which reminds me; has anyone been watching The Undoing? He stars alongside Nicole Kidman and Donald Sutherland and I have to say it is one of the best TV dramas I’ve seen in a long time. I so hope the ending is as good as the rest of it has been.

We’ve also been watching I’m a Celebrity – this year from a castle in Wales rather than the Australian jungle. Question: does anyone else think Victoria Derbyshire, one of the contestants, sounds exactly like our Jackie Kabler? I mentioned it to her when I saw her at work yesterday and she said that although loads of people have said that to her, she doesn’t hear it herself.

The bit I like least about the show is when they have to eat disgusting stuff. Even when they’ve won all the stars, the things they are given to prepare meals with are yuk! I’d rather stick with the rice and beans, but then I am a veggie.

I’ve been baking this week, but only because there was some leftover pastry from a lovely lemon tart that Katie made last weekend. Dan is a fan of lemon desserts, so I suggested Lemon Meringue Pie, which I probably haven’t made in forty years or so. 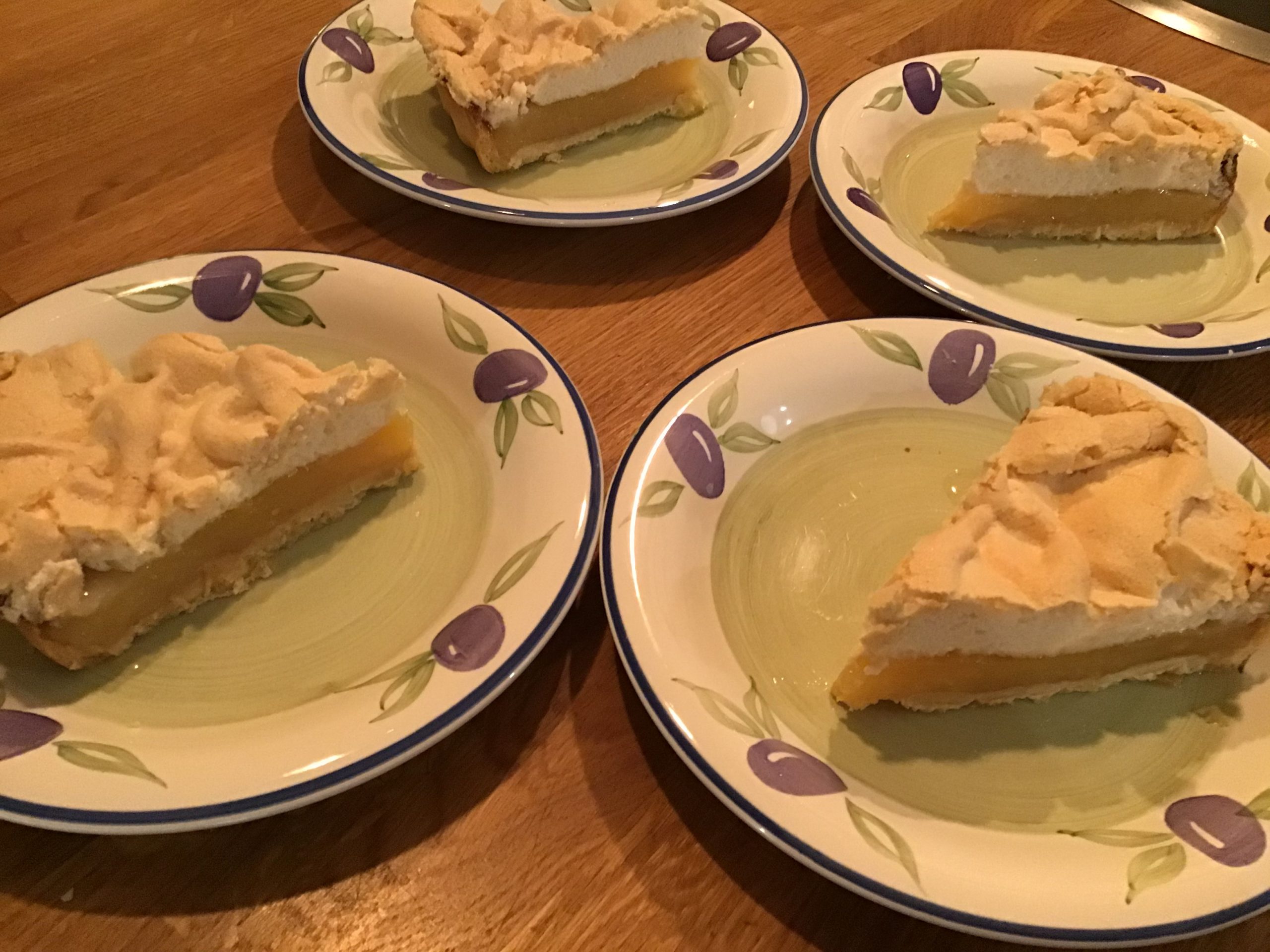 The recipe is from the Bero Book, which I was the cover girl for in 1966, although that one is now kept safe in my office and I use a later edition to bake from. I was quite pleased with the result although if I’m honest, it was a bit too sweet for me. 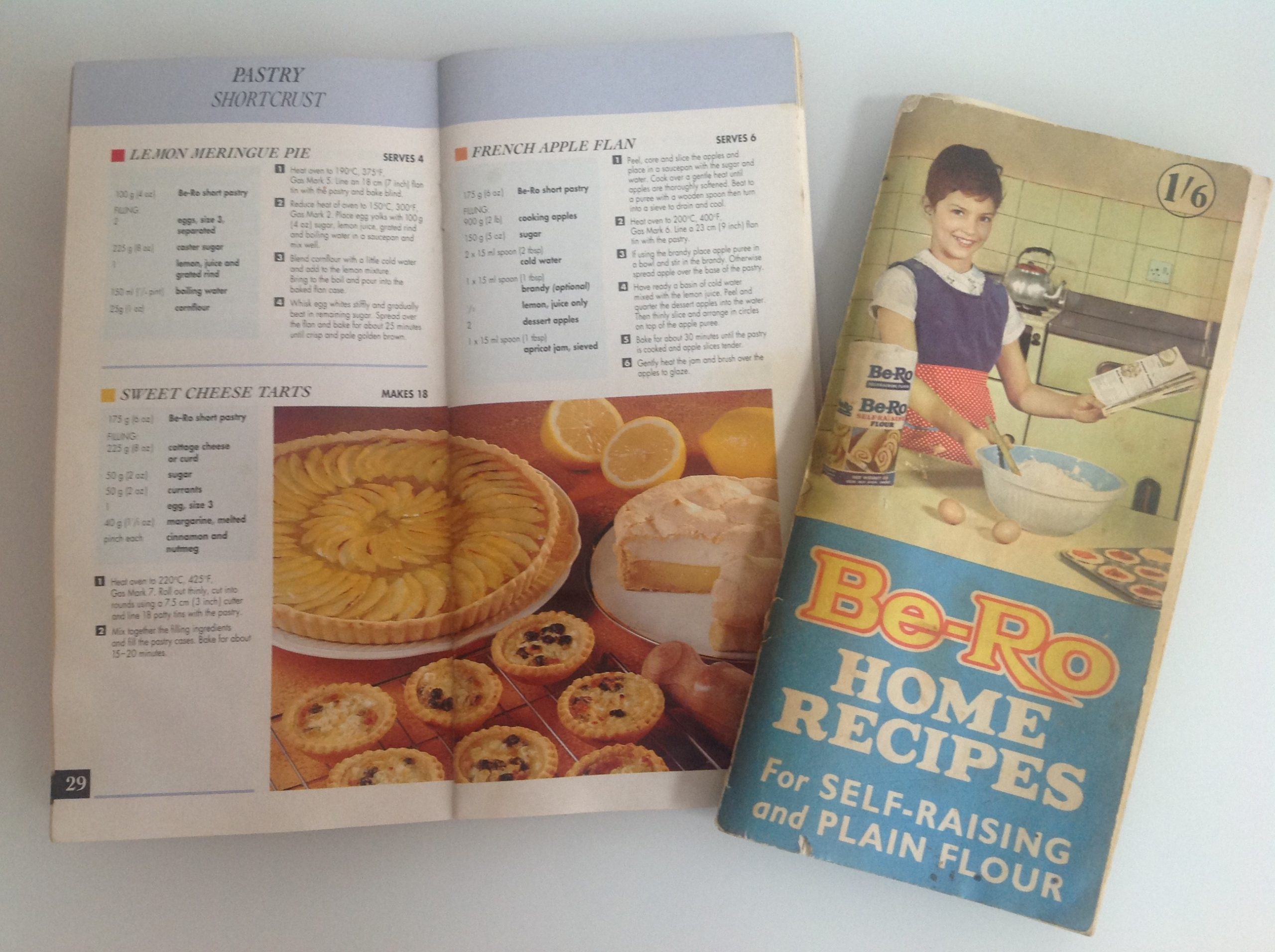 So just time to tell you about three fab Today’s Special Values coming up on QVC over the next week, although the Bareminerals Today’s Special Value launching on-air tonight is already on pre-sale. There is a supersize of the Original Loose Mineral Foundation (I’ve just checked our website and my shade, Medium Tan and my winter shade, Medium Beige are on advanced orders week commencing 7th December), Mineral Veil, Barepro Eyeshadow Stick in a new shade of Copper Rose, Buttercream Lip Gloss in Must-Have, Lashtopia Mega Volume Mascara and a Full Flawless Face Brush. It all comes beautifully gift packaged and is under £38 and on three Easy Pay interest-free instalments.

It should be featuring in the Saturday Morning Gift Show, which I am presenting at 9 a.m., if we’ve got enough stock. Also in the show is the latest ‘blanket with sleeves’, – it’s by Silentnight and is called a ‘Snugsie’. We have a lot of this style of blanket at home and they really are a great idea for snuggling up watching TV or reading – there are six colours available and currently only £15. 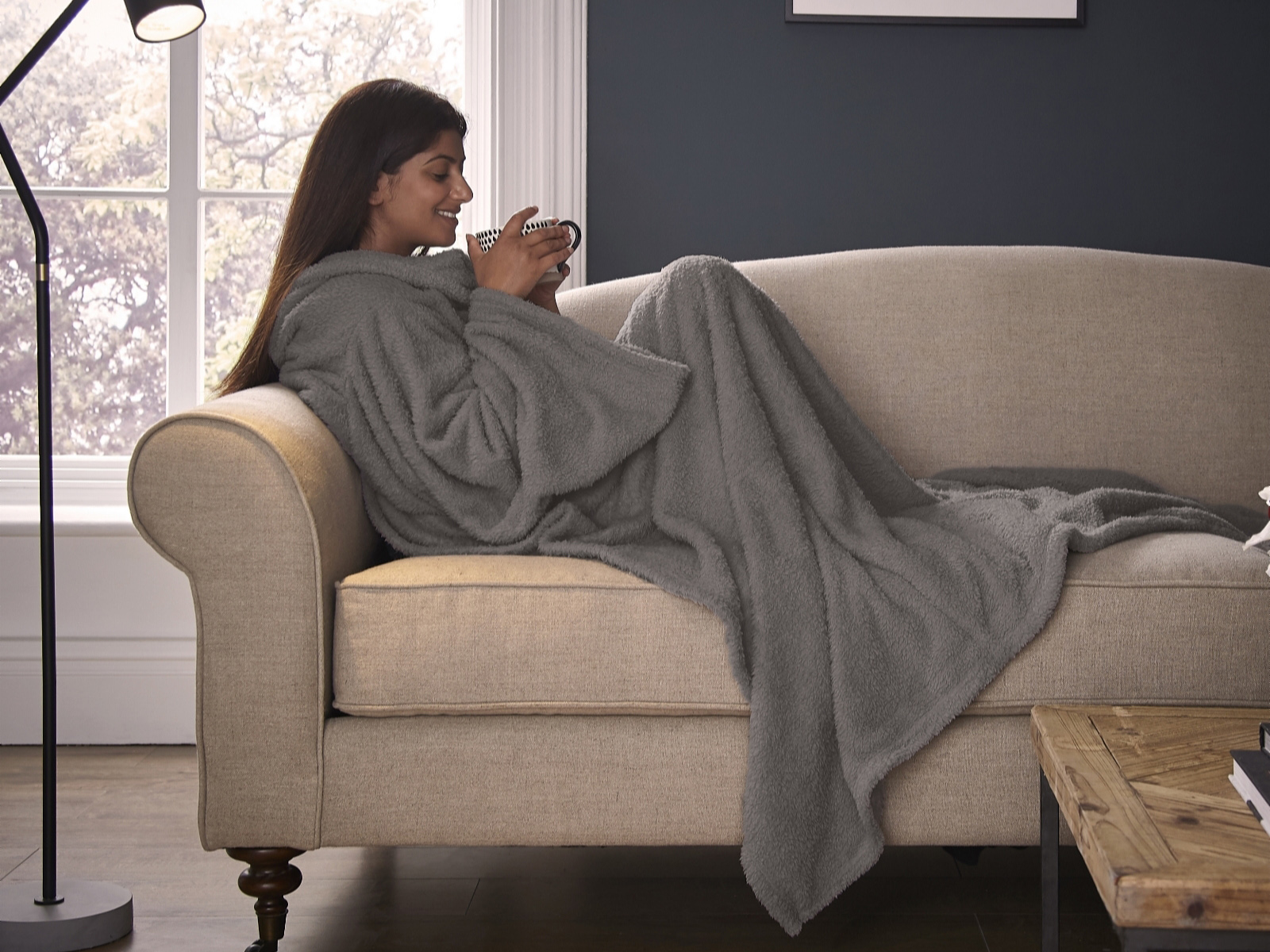 You could maybe have some candles burning while you are all snuggled up. This great set from Price’s is the Today’s Special Value next Tuesday, 24th November. It’s a 66-piece set for under £25 and features three new fragrances, Black Orchid and Musk, Spiced Apple and Cinnamon and Salted Butterscotch, along with favourites Warm Cashmere, Winter Spruce and White Jasmine. There are six boxed jar candles and a corresponding box of ten tealights in each of the fragrances – perfect for splitting into small gifts! 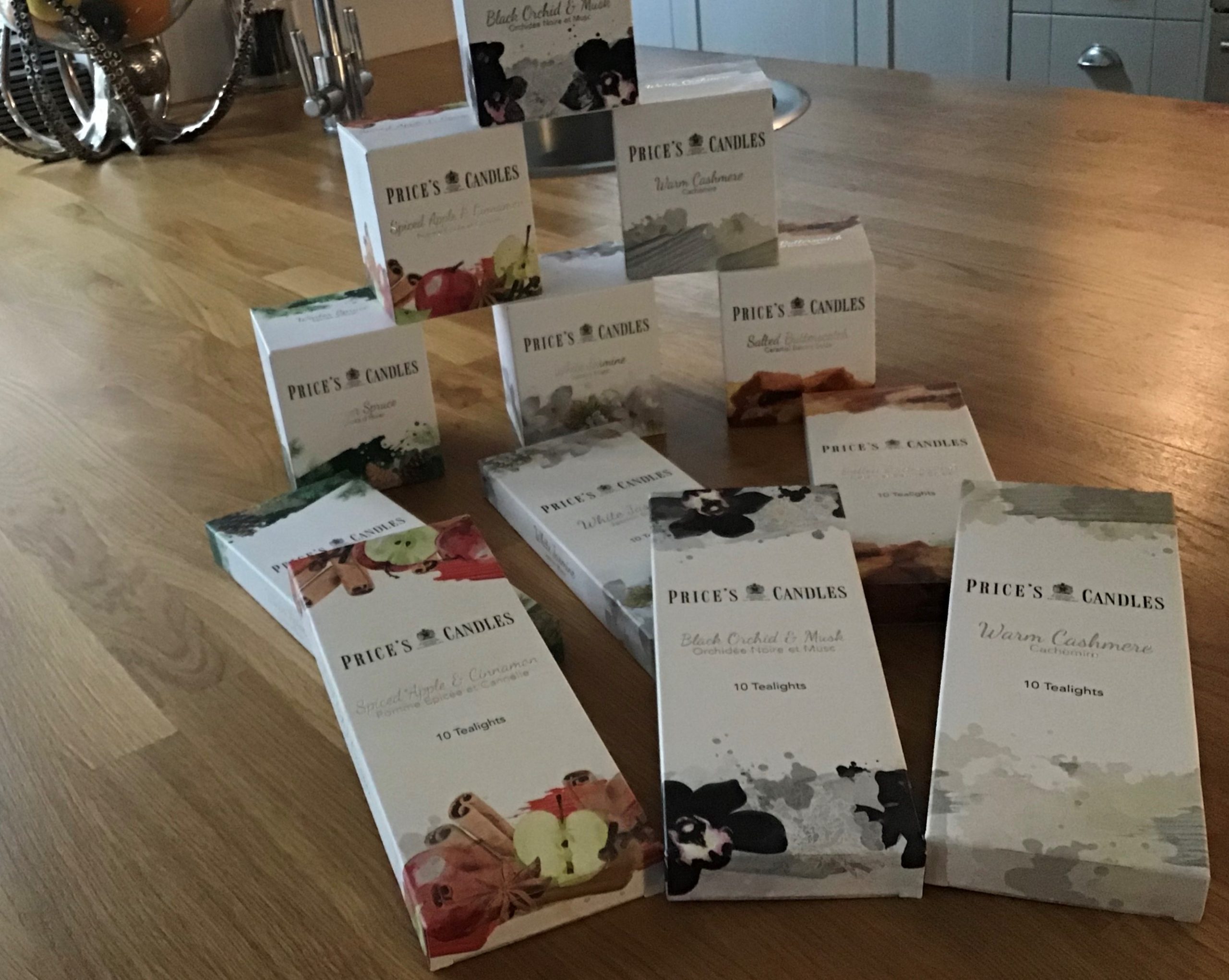 And also keep an eye out for the Korres Today’s Special Value next Friday. This photo doesn’t really do it justice in terms of size – the body wash is a litre! I used it yesterday for the first time and it had a nice moisturising lather and a very pleasant aroma. 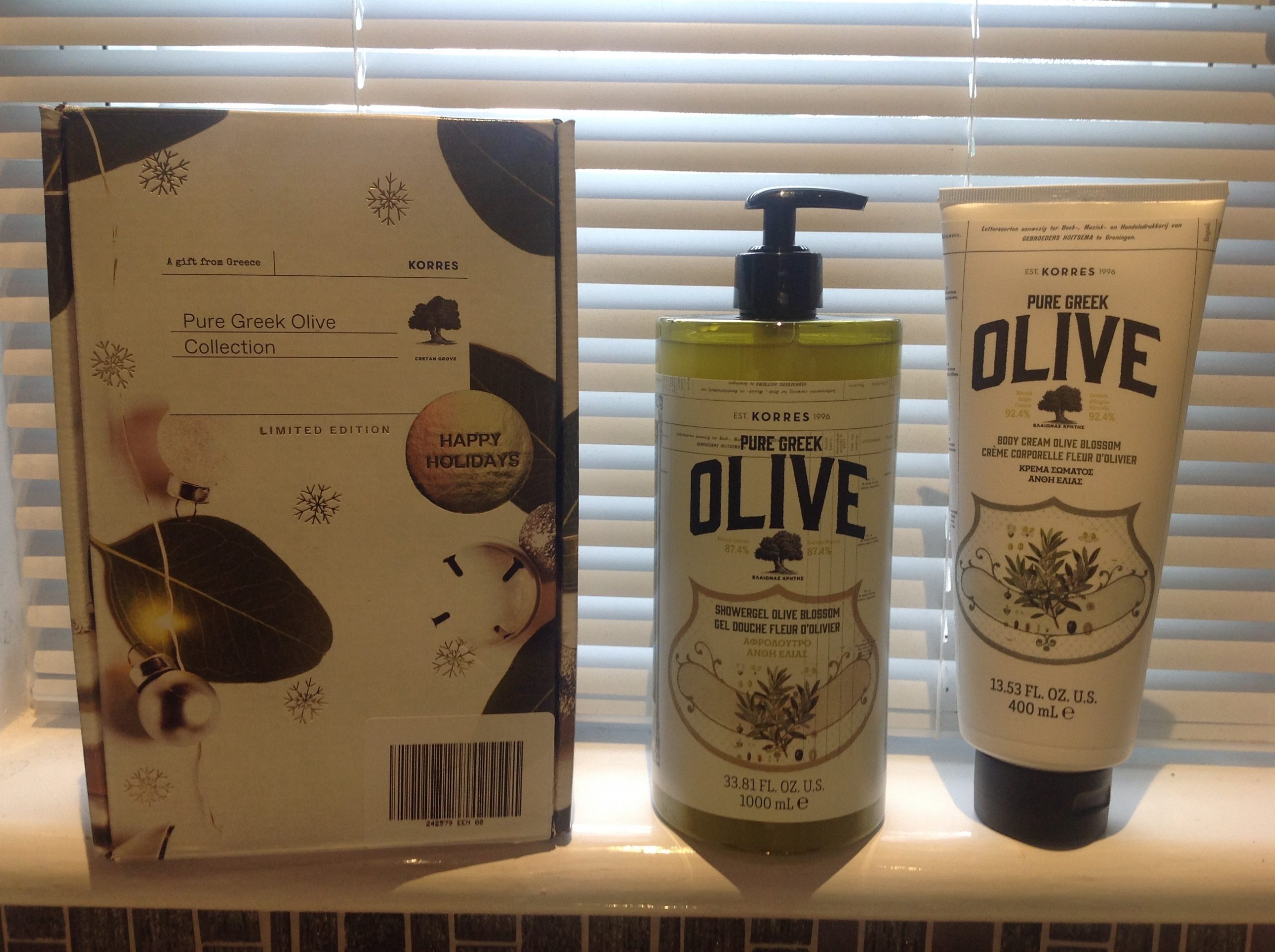 So, back to where we started with the Centigrade coat – watch my social media this week for some photos of me wearing it rather than Wilfie.

Have a great weekend.
Much love,
Julia xx