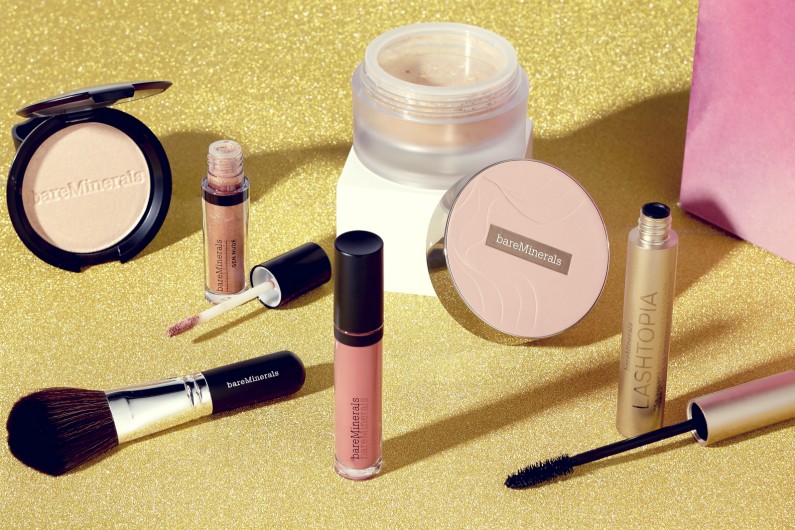 I suppose you could argue that we are all original, but I’m talking about Bareminerals foundation. I have tried lots of foundations, from Bareminerals and other brands that we stock at QVC, but I always come back to Bareminerals Original because I love the natural finish and feel of it on my skin (it doesn’t feel as though you are wearing foundation) and it is buildable coverage. It is in a supersize in Sunday’s TSV, but is just a small part of the six-piece collection, which has already been selling well on pre-order.

The collection comprises the foundation in an 18g size with a flawless face brush for perfect application, a lipgloss in a berry-rose colour, Lashtopia mascara, and two new products: Endless Glow Highlighter, which is non-glittery, and a Metallic Liquid Eyeshadow in a rose gold colour. The value is immense, as bought separately from Bareminerals it would cost £173 and our price is £35.97 plus the reduced £1.95 P&P on beauty products until Christmas. It’s also on three interest-free instalments if you want to spread the cost.

There are eight foundation shades to choose from (two are on Advanced Order) and if you generally wear similar colours to me, I am medium tan at the moment but in the depths of winter, if I haven’t been on holiday, I move into medium beige. It really is a great offer, but then it had to be to gain the TSV spot on Beauty Day!

Yes, Sunday is a day of beauty on the main channel and we have a fabulous line-up for you. It is normally my weekend off, but I’m coming in to present Molton Brown at 10 a.m. and Philip Kingsley at midday, followed by a Facebook Live at 1 p.m. Also watch out for some of the new lines from SBC in their 3 p.m. show with Charlie Brook. In particular, Grapefruit and Ginger Body Wash and Arnica and Sandalwood Muscle Soak, which I have been making good use of… let me explain.

A couple of weeks ago, I told you about the Botox injections I had in my left calf to relax the tight gastroc muscle, a result of my infantile Polio. Well, I have now had three physiotherapy sessions, part of which are manipulating the muscle manually, but also, wait for it… Pilates exercises!! It turns out that my love of Pilates and the Aeropilates machine that we sell has probably kept me as mobile as I am. It is trickier trying to force my body to stop ‘cheating’ by using my stronger leg in preference to my weaker one, but I can already feel a small amount of improvement. My only issue is that the calf permanently feels as though it is about to cramp up… hence the use of the muscle soak, which I have to say smells rather nice too.

Talking about TSVs (as I was above), have you ordered your Yankee Candle one yet? Thankfully I ordered mine last night before Glittering Star sold out and went to advanced orders. I smelled the fragrance on a recent show I did with Rosa and really liked it. As I sit writing this at 10.30 on TSV morning (Friday 1st), three of the other options have also gone to advanced orders, so quick sticks if you want to take advantage of the deal – two large jars, two medium jars and two small jars in your choice of fragrance for less than the price of two large jars. I’m seriously tempted to order Fluffy Towels as well – decisions, decisions!

Away from QVC, I’ve been concentrating on writing book three in my DCI Rachel Hart series, although I did spend Wednesday morning doing a bit of tidying up in the garden.

It was a gloriously sunny day and the decking was covered in leaves so I got my ‘witches broom’ out (the one Gill Gauntlet sells on QVC) and had a good old sweep up. Quite appropriate really, as it was Halloween yesterday. I’m not a big fan of ‘trick or treating’ but I did like this idea that my make-up lady yesterday told me they do on her street. All the houses that want to participate put a pumpkin on the doorstep – no pumpkin, no knocking. What a good way to avoid upsetting people, particularly the less-able or elderly who don’t want to partake. While I think about it, there is a free ‘spooky-ish’ short story on my author website if you’d like to read it, and all the action in Little Girl Missing takes place around Halloween and Bonfire night… I’ve just been informed that LGM has been selected for a month-long 99p e-book promotion on that website named after a river in South America, if you get my drift.

Speaking of which, we went to a quiz night on Wednesday at my son’s golf club, which we had all been looking forward to – our team was called ‘Quizzie Rascals.’ I’ve never been there before and within ten minutes a lovely lady called Philomena came up to chat with me because she had recognised me from QVC. According to her husband, there are constantly parcels arriving from QVC – a bit like my house really! Anyway, we had fairly high hopes of doing reasonably well as there were sports rounds, music rounds, picture rounds and animal rounds as well as geography-type questions, hence the connection with the river in South America. We weren’t too bad on some rounds scoring eights and nines out of ten but two rounds really let us down, sport (mainly because there were no questions on men’s football or the NFL) and animals… do you know what species a squab is the young of??? No, neither did we, but we do now.

Just before I finish, if you’ve spotted me wearing a sparkly bracelet and a pair of dangly earrings they are from a new range called Hilary Joy, which is launching with Dale Franklin at 1 p.m. on Jewellery Day this coming Tuesday. They are not yet available to purchase on the website but do check out the show and also the online Season of Jewellery feature if you’re not around to shop on Tuesday.

And lastly, well done to David for winning the GBBO this year, although I have to say my heart went out to Steph – it just wasn’t her day. AND what a fantastic achievement for England to reach the final of the Rugby World Cup. Come ON Boys… just one more win!