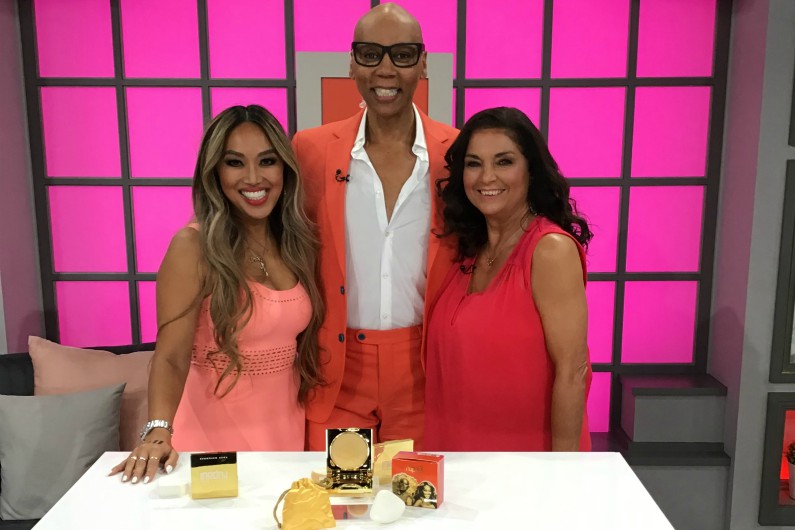 In eighty-two days it will be Christmas and that time will simply fly past if the rest of this year is anything to go by!! We have now launched our countdown to the big day with a three day event, Discover the Magic of Christmas, which I’ll talk more about later in the blog. Firstly, I wanted to thank you for all the lovely 26th anniversary messages on social media – I am always mindful that without our customers (i.e. you) QVC would not have been the success it is, so a HUGE thank you. I hope you took advantage of the 10% discount we offered on air on our birthday? Maybe you, like me, treated yourself to the Lindt TSV? I’m going to confess and say that I’m not the biggest fan of the ‘red balls’ but I thought some of the other flavours were delicious, as you probably realised if you watched my presentations on air. My order will be safely stashed at the back of the ’emergency chocolate cupboard’ until Christmas (yes, we really do have one), soon to be joined by some Hotel Chocolat I should imagine as I’m presenting the 5 p.m. show next Thursday and doubt I will be able to resist ordering… for Christmas, of course.

As mentioned in last week’s blog, we go out as a family to celebrate the QVC anniversary and this year was no exception. I had some Virgin Experience Day vouchers, which I had paid to extend twice as I’d been too busy to use them, so we decided they would be perfect for our dinner out at Bella Italia in Windsor. It was an ‘unusual’ location, but the food was tasty, the waiting staff attentive and the conversation flowed along with the Prosecco. A really nice evening with lots of laughs, just as it should be.

Actually, I’ve had lots of laughs at QVC over the past week too. It started last weekend with Mally and Ru Paul. He was an absolute joy to work with, very professional and as nice off screen as he was on. He had been doing the rounds on his London trip to promote his new Drag Race UK show, which started this week on BBC. He was highly entertaining on The Graham Norton Show, not too sure about the cockney accent, and also made an appearance on Strictly Come Dancing supporting his friend Michelle Visage. I wonder if you are watching it this year? I like to tune in to see which pieces of Butler & Wilson jewellery the dancers and judges are wearing. I thought Michelle was excellent this week, as was Karim and Dev, but my heart was completely stolen by Will! Who are your favourites??

As well as working with Ru Paul on Sunday, I also had the pleasure of my first show with Gok Wan yesterday. He is another consummate professional, full of energy and enthusiasm and as friendly and warm off air as he is on.

If you missed his new collection, WULI:LUU, designed exclusively for QVC, there are still a few pieces available on our website, including the ‘Tough Stuff’ T-shirt I was wearing. I like the message – we have to be made of tough stuff to survive these days – but also the fact that it’s made in 100% cotton. Mind you, the temperature has definitely dropped over the past few days, so it might become a layering piece in the near future.

Speaking of colder temperatures, we’ve just had a smart meter installed and it is quite a shock to realise just how much energy boiling a kettle costs. We have flicked the heating on for a few minutes first thing in the morning to ‘take the edge off’, but we haven’t succumbed to the underfloor heating in the bathrooms yet. The birds have noticed the drop too, making themselves heard if the bird feeder has run out of Richard Jackson bird food. We’ve had lots of blue tits visiting along with chaffinches, robins and some bigger birds too. No little bustards though, which will only be funny and relevant if you were watching my show with Frankie on the Style Channel last Sunday… I promise you, there really is a bird called a little bustard, and also one called a great bustard – I should probably leave that there!

I’m not actually in at work today, as tonight we are going to the Royal Albert Hall to see ‘Skyfall’ with a live orchestra, so I am missing the ‘launch’ of Christmas on QVC. Today marks the start of the extended money-back guarantee too. Instead of the usual thirty days, the guarantee is until 25th January, thirty days after Christmas, which really helps when purchasing Christmas gifts early. We also have another of our Festive Find promotions over the three-day Discover the Magic of Christmas event – you can opt for three interest-free instalments on all your purchases of on air items by using the code SHOP3Z. As with all our promotions, and there will be loads between now and Christmas, do check out the full Terms & Conditions on our website.

One of the best has to be the £1.95 P&P on beauty products, which I’ve just taken advantage of while ordering my Molton Brown TSV, launching tomorrow at 9 p.m. but already on pre-order. I’ve gone for the ‘fresh’ option because it has my son’s favourite ‘Tobacco’ body wash in it, but there is also a ‘warm’ option, which has Rosa Absolute and the new Suede Orris body wash – it’s a six-piece collection and as you would expect, it’s terrific value.

I’m going to finish there as we are having early dinner before the concert. Have a great weekend, and I’ll see you next Thursday for some chocolatey loveliness.