Spring is in the air and in my step… 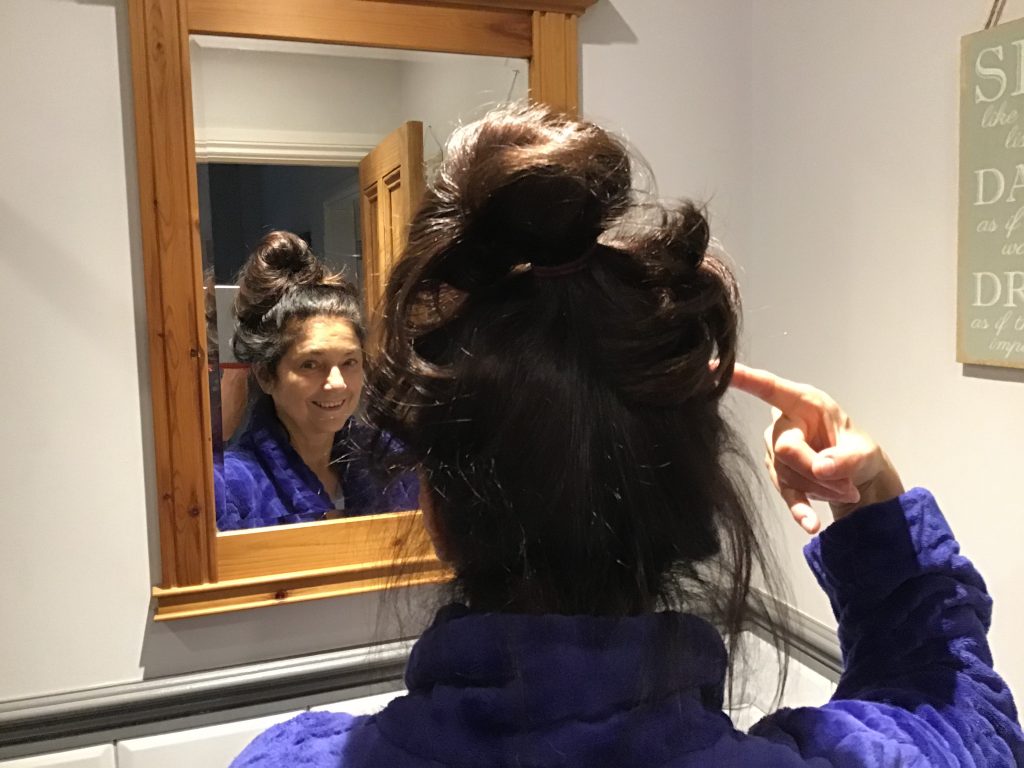 Well, here I am, another week down the road to recovery after my ankle surgery and it feels as though some real progress has been made, although you wouldn’t have said that if you’d seen me last Saturday!

I’d had one bath since my operation, but that was before I broke my arm and we managed quite well. I was desperate for another relaxing soak rather than perching on a stool in a shower cubicle, which is only just big enough, particularly as we had the fab Molton Brown Today’s Special Value and I wanted to feel part of it. I managed to get up the stairs without too much difficulty, encouraged by the gorgeous scent of Heavenly Gingerlily, but on arriving in the bathroom, I realised the enormity of the task ahead with no left side. Chris was all for abandoning the mission, but I think you all know me better than that… no way! I managed to get in okay by sitting on the edge of the bath, swinging my right leg over and kneeling on it before wriggling it underneath me to sit down in the warm foamy water before undoing my airboot on the left leg. However, getting out was another matter – even I was wondering if I could manage it. Eventually, after draining all the water out and placing towels in the bottom of the bath for traction, I managed to lean on the elbow of my broken arm sufficiently to push up through my right thigh. Thank goodness for all those hours spent on my Aeropilates machine! The ordeal didn’t end there either; I hadn’t realised that I had no left hand to take my weight on the bannister on the way down, so I had to resort to coming down unceremoniously on my bottom. I’ve stuck to showers with the gorgeous Liz Earle Cleanse & Polish Body since, although I am tempted to try a bath later this evening as a reward for all my effort with my physiotherapy exercises, which have delivered really good results this week. I can now walk for a continuous twenty minutes on my two crutches, putting about 75% of my body weight through the foot in the airboot, followed my a further five minutes with just one crutch. Ideally, the crutch should be in the opposite hand to the broken ankle but I can’t do that with a gutter crutch so it’s a bit more difficult.

Monday is my X-ray day when I find out if I will be allowed to leave the airboot off and move on to the next stage of recovery – please send positive vibes my way. In readiness for that, I have been shopping for hi-top trainers and flat ankle boots. They don’t seem to be very popular at the moment, but I’ve managed to get some Reebok trainers for walking on my treadmill wearing my ankle brace and also two pairs of footwear from QVC.

These Skechers boots are nice and wide so will be ideal while I still have a bit of swelling as the tendons and ligaments settle down. They’ll also be warm while we’re still experiencing cold weather. 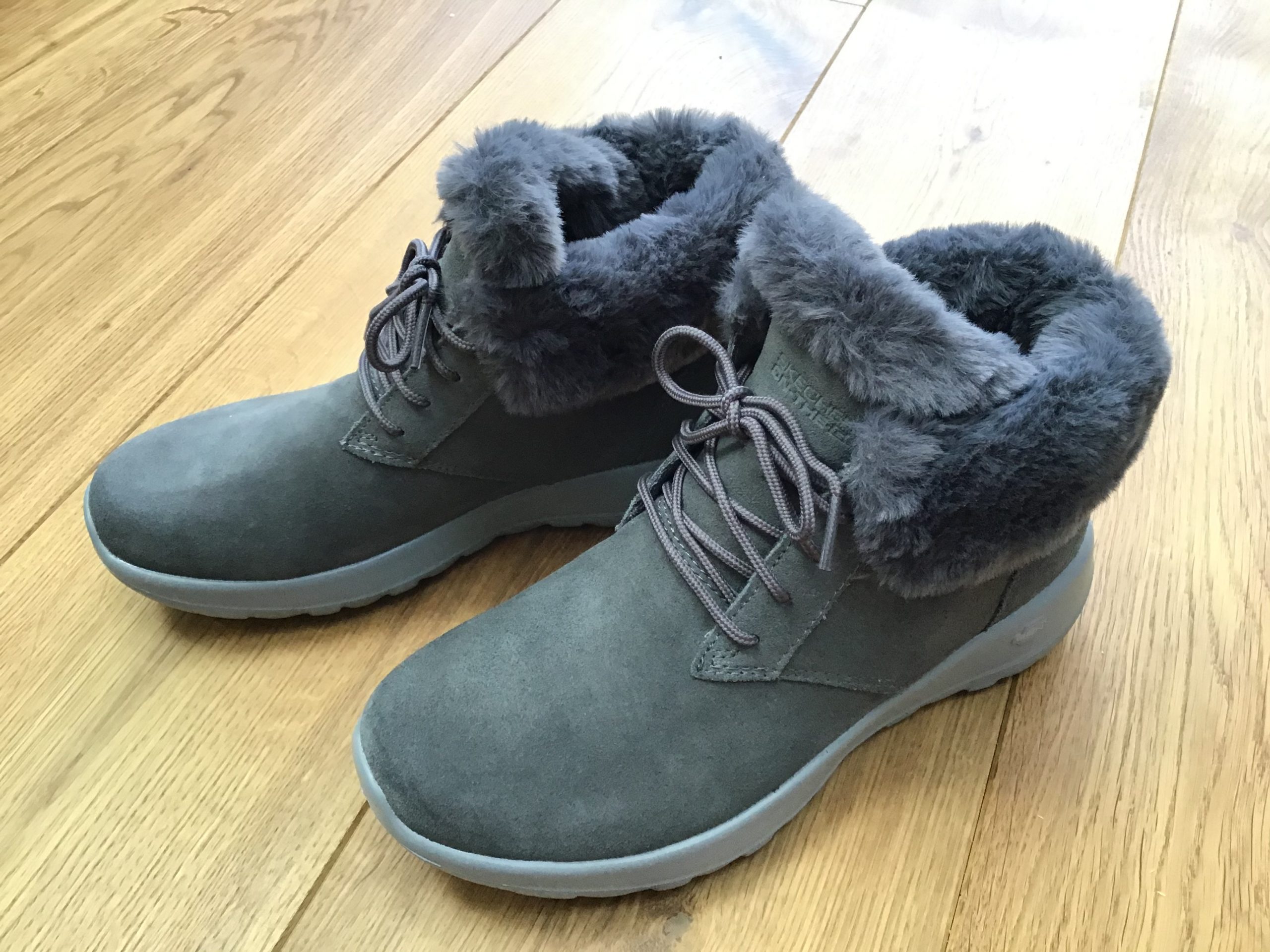 And then, for a bit of glam when I’m eventually able to come back to work, I’ve ordered these from Geox. They’re not dissimilar to the Geox trainer style I have which have been much admired but will give me more support around the ankle. 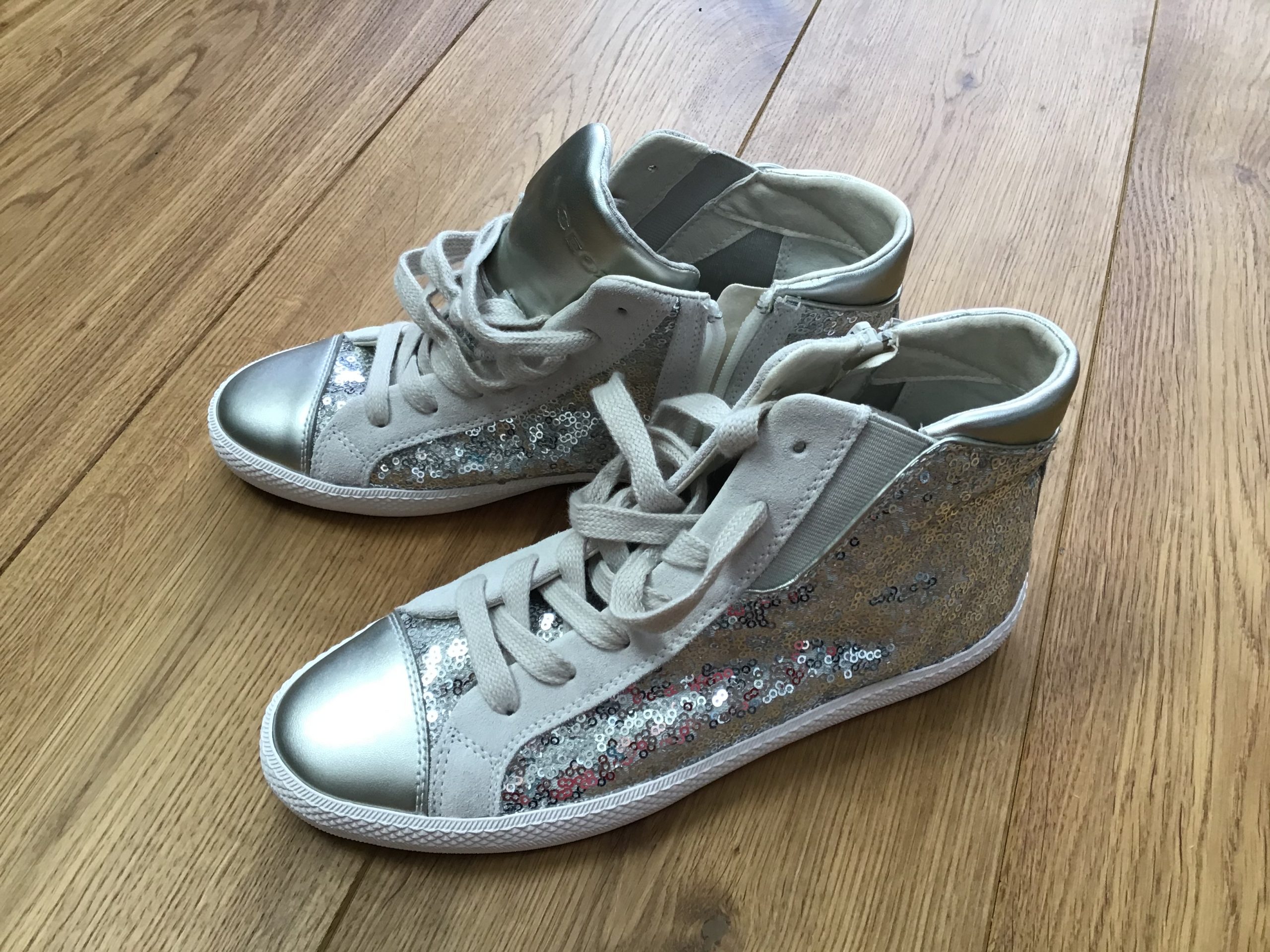 I’ve also managed to get back into my usual wardrobe of leggings and tops this week after being restricted to wearing dresses, which is much more practical for doing my exercises in. Mind you, I’ve enjoyed wearing dresses, especially as it’s now completely acceptable to wear them with trainers or flat boots. We have a first Today’s Special Value from Perceptions coming up next Thursday, which would have been ideal for me as it’s a midi length. It’s not on pre-order, but here is the item number, 183099, to watch out for. It comes in five different colours and prints and, wait for it, is under £35 – I have a feeling it may be rather popular.

Sunday was St David’s Day and we decided to have a bit of Welsh cuisine for lunch. I make my own version of leek and potato soup which is very easy to do, but I don’t think I’ve attempted Welsh rarebit since I was at school and I’m pretty sure we used milk as the liquid rather than beer. The toast did get a little burnt around the edges as you can see, but it didn’t spoil the yummy taste. 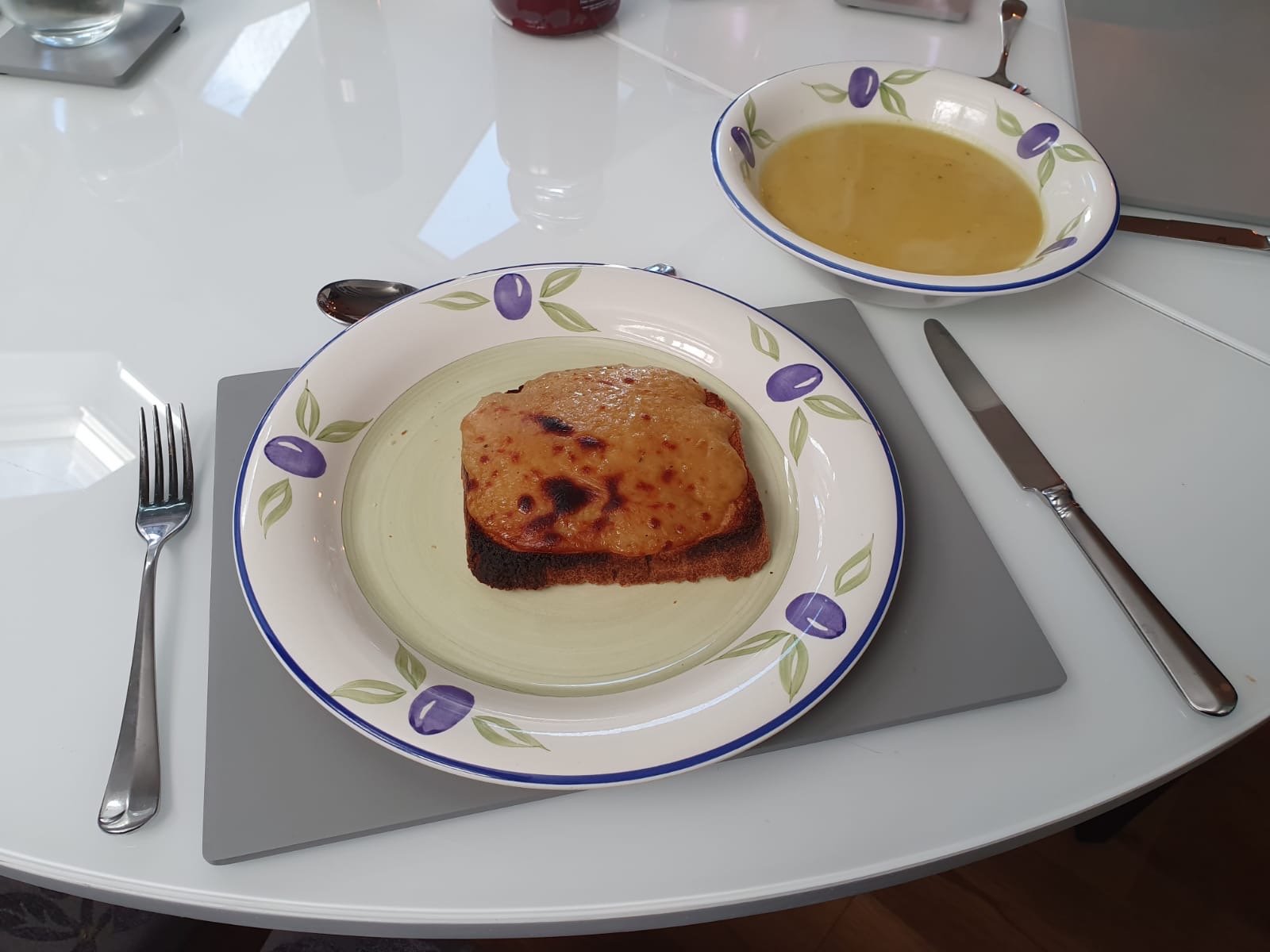 We were going to make Glamorgan sausages for dinner as well, but I was too tired so we did them on Tuesday instead and they were delicious served with a red onion and chilli chutney.

Speaking of Tuesday, I had my first crutches-only trip out when I went to the hairdressers to have my colour done and a bit of a trim. It was so lovely to feel my hair being washed with two hands instead of one – it felt and looked great when I left the salon. Unfortunately, I have to tie my hair up for my exercises and, as I mentioned last week, it’s the one thing Chris hasn’t really got to grips with. This is one of his better attempts!!! 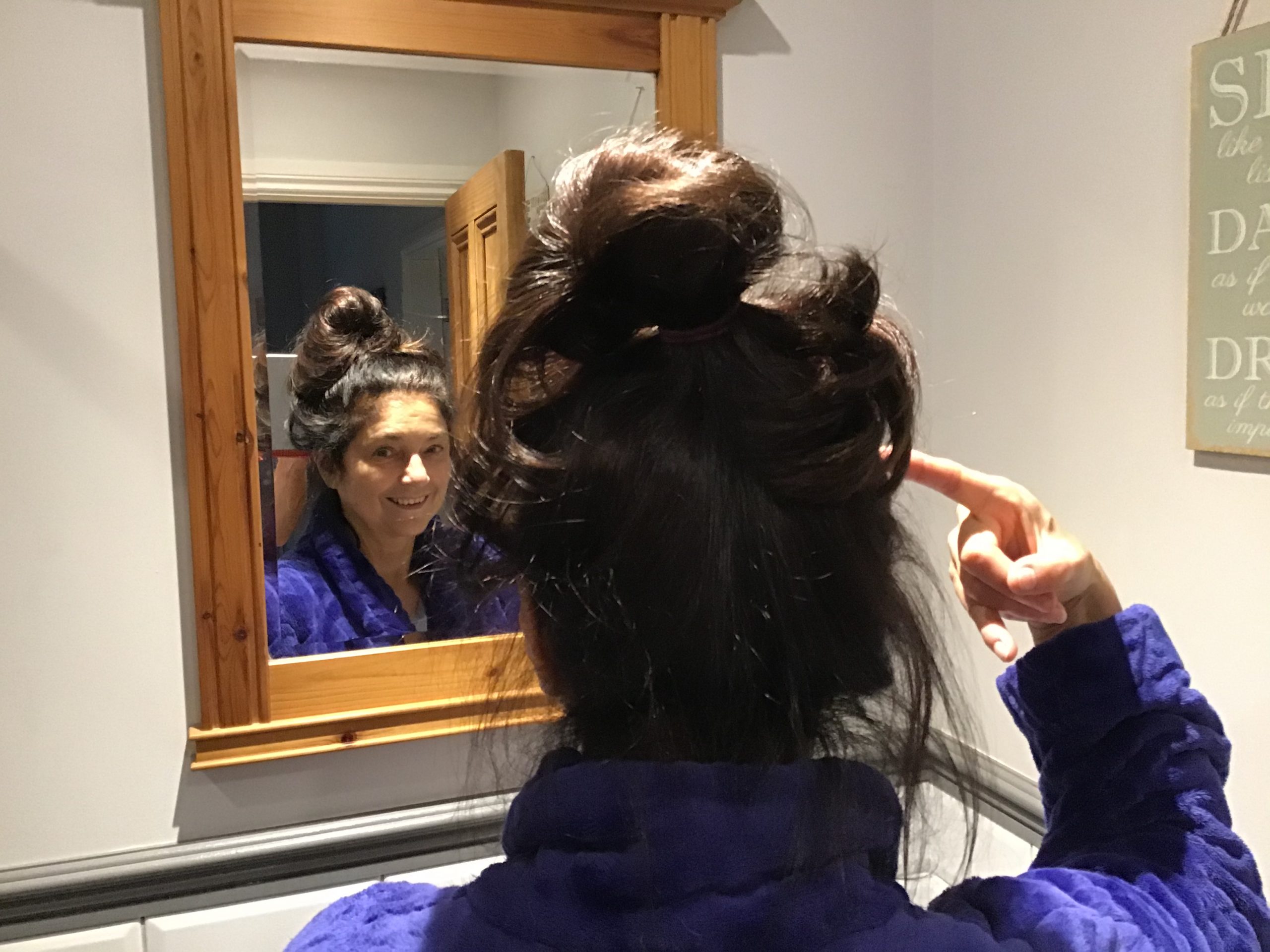 Tomorrow is Jewellery Day on QVC and the brand chosen for the Today’s Special Value is Lola Rose. Belinda, as the style is called, is a pretty heart-shaped design necklace in a choice of six different semi-precious gemstones and is already available to pre-order. I think my favourite is the white mix, how about you? There is also a competition on the QVC Facebook page at the moment to win £245 of Lola Rose goodies. All you have to do to be in with a chance of winning is comment on the Facebook post with a picture of your favourite Lola Rose piece and it could be you.

The Lola Rose Today’s Special Value might make a nice Mother’s Day present, which is only a couple of weeks away, or a birthday gift. Unfortunately, it’s too late for my mother-in-law’s birthday, which is today. It’s the first birthday where I’ve officially been able to call her Mum in all the forty-two years that I’ve known her. This photo, with my daughter Sophie, was taken at Christmas four years ago when she was on the sherry! Chris’s sister is visiting from Australia at the moment, which has hopefully made her special day even better. 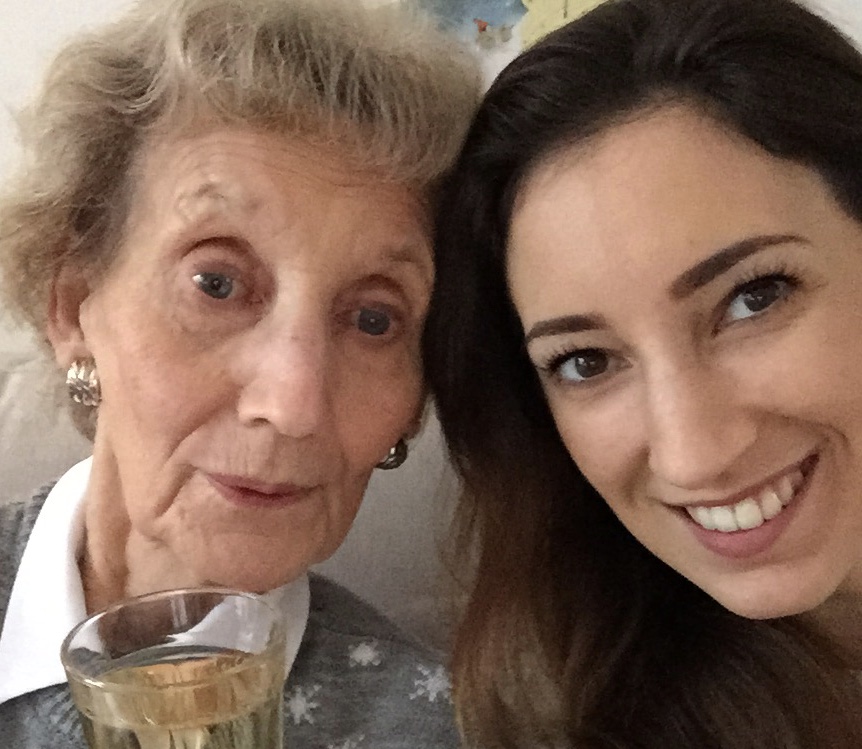 There is another special day on Sunday when it is International Women’s Day. I was watching one of the morning breakfast shows today and stayed watching because one of the guests was Jemma Forte, our Molton Brown guest. They were discussing a poll where viewers voted for their most inspirational woman in a film… Bridget Jones came out on top! Really? I loved the films and the scattiness of the character, but I’m not sure I would describe her as inspirational. I think second placed Erin Brockovich (who was a real person) would have got my vote. Who is your female inspiration? By the way chaps, before you feel left out, there is an International Men’s Day on November 19th.

There have been times this past week after an hour long physio session when I have just wanted to curl up like a cat. 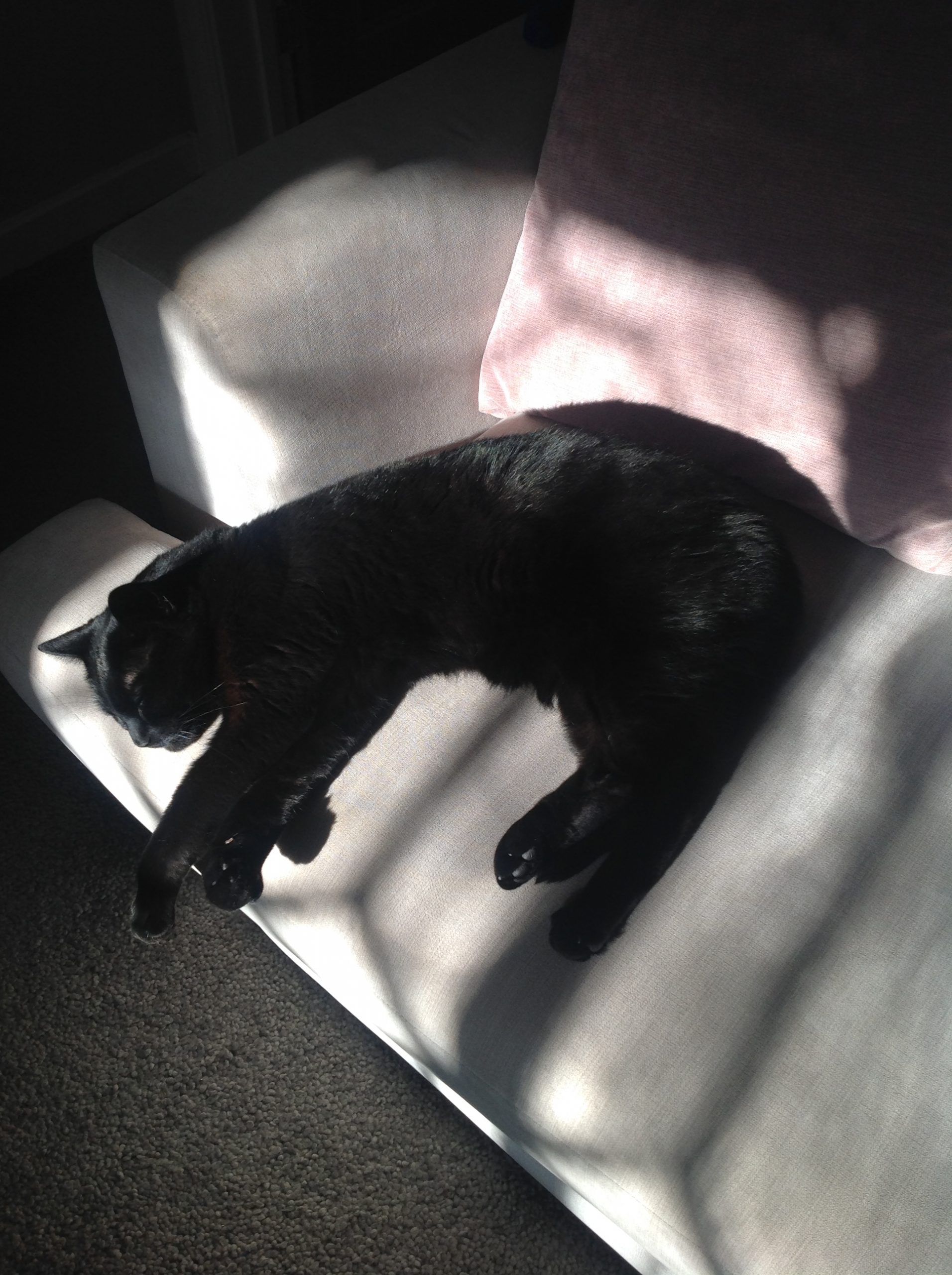 Look at Wilfie, relaxing in the sunshine. You’re probably thinking what a chilled cat, butter wouldn’t melt in his mouth… Think again. 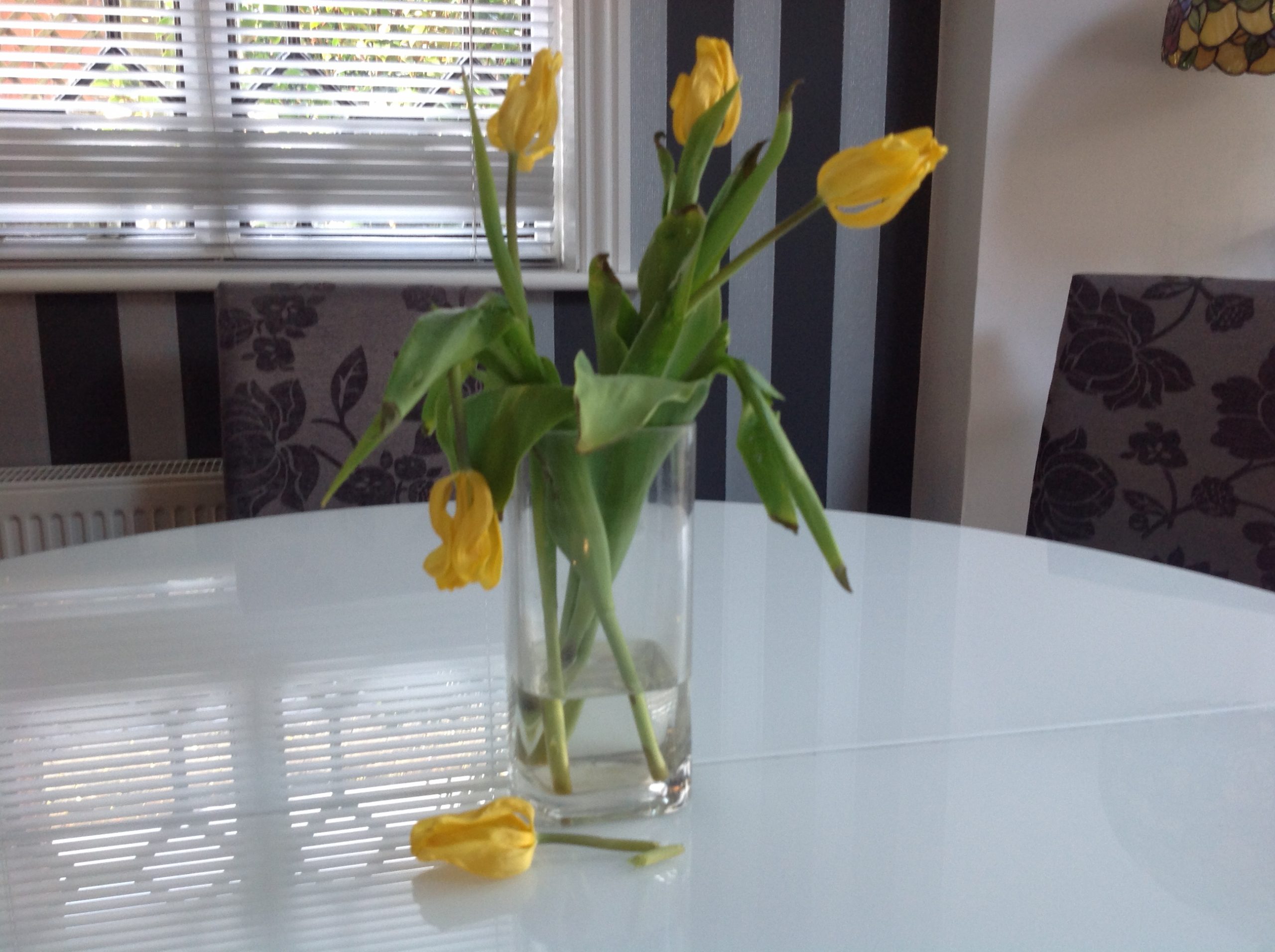 These are what is left of the dozen yellow tulips that one of my kind neighbours bought for me last week. Wilfie likes to tap them until they break, which is why I usually have Peony flowers around the house. He still taps them but they remain intact.

Well, that’s it from me for another week. Hopefully I’ll be back by the end of the month,