Mrs Maxwell… Pleased to Meet You 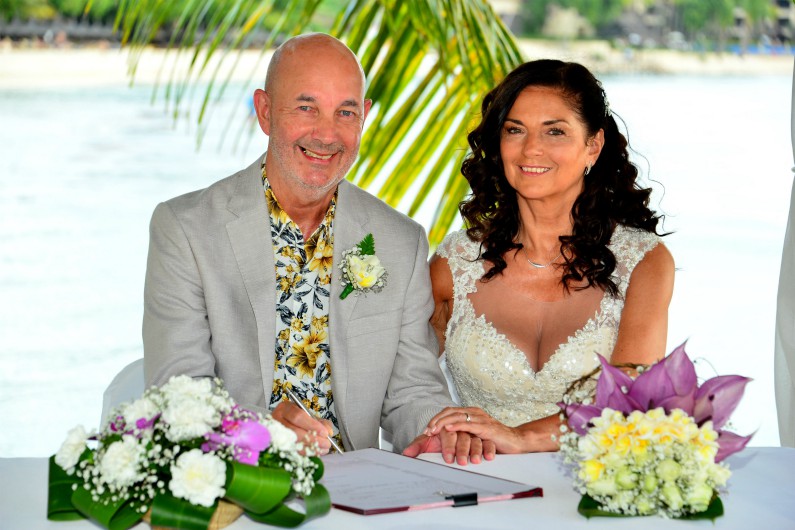 Is it really four weeks since I wrote my last blog? The time has flown by and has been absolutely filled with wonderful things – too many to mention all in one blog so I hope you will bear with me and allow me to split the wedding stuff into this week and next. Can I just say a massive thank you to all of you who left comments on my last blog wishing Chris and I well – I will try and get round to answering them all this coming week now I’ve come back down to earth!

I’ve had a lovely response to the pictures I’ve shared so far on social media and I’ll be sharing a few of my beauty secrets in the run up to the wedding later on in this blog – funnily enough, Elemis and Philip Kingsley both feature and both have TSVs coming up in the next few days.

It was a really busy time for me just prior to flying off to Mauritius, not just with all the wedding stuff but also my next book, What He Did. Don’t laugh, but I was actually finishing the copy edit at 4pm on Monday 19th and our flight was just after 9pm – talk about down to the wire.

So, after a twelve hour flight, we arrived in Mauritius and it was… raining. In fact it rained all the way from the airport until just before we arrived at the Maritim Resort and Spa, where the sun was out and the skies were blue – phew. Our whole wedding party was impressed with the hotel and the location. On the first night we tried out the buffet restaurant, and in particular blue macarons – I think they used a lot of food colouring, which we all found very amusing.

After a lovely day on the beach, the second evening was made extra special for me when Sophie got up to sing with the band, with her dad playing the drums. She sang her ‘party piece’, Valerie, first and then she got up again and sang ‘Still the One’ by Shania Twain. Unknown to me, Chris had asked her to learn it to sing at the wedding, unaccompanied, but the band knew the song – needless to say I was a blubbering wreck by the end of it, which continued as Chris stepped out from behind the drums to sing, ‘Have I Told You Lately That I Love You.’ The band were so generous allowing the Maxwell family takeover!

It wasn’t wall to wall sunshine, in fact there were a few days when it was warmer here in the UK than it was in Mauritius but honestly I have no complaints, even the day the heavens opened and we all rushed to take cover in the bar with a hot drink to warm us up as we played the card game, Chase the Ace. My hot drink of choice was Russian coffee – like Irish coffee but with vodka instead of whisky.

We were hoping the weather would stay dry on our wedding day and thankfully it did. After spending the morning on the beach (vaguely surreal), me with Philip Kingsley Elasticizer on my hair, we all met up for lunch in the beach restaurant where I opened all our lovely cards – thank you so much if you sent one, all those that arrived before we left travelled with us. There was also a special card from my mum who wasn’t able to be with us. We were getting married on what would have been Mum and Dad’s platinum wedding anniversary and she had organised for Sophie to bring a bottle of Moet & Chandon to Mauritius as that was the champagne they had toasted their marriage with seventy years previously – no mean feat when you consider they were married in 1949 and everything was in such short supply after the war. It was a wonderfully kind and thoughtful thing to do and had me blubbing all over again… honestly, I was an emotional wreck by the time I eventually said, ‘I do’.

The wedding was at 4.15 and once again I had a lump in my throat as our son, Daniel, took the place of my dad to walk me down the ‘aisle’ and give me away, to the sound of ‘A Thousand Miles’.

Just as an aside, the four songs from our playlist for the actual ceremony were only decided upon at 4.05pm – thanks to Sophie’s boyfriend, Reece for doing the honours with his mobile phone. Daniel was also our best man and Sophie was our bridesmaid – this made the day so special for Chris and I.

There were so many lovely little touches, like Dan carrying the rings to us on a flower, but I won’t go into any more detail for fear of boring you. What I can say is that although it wouldn’t be the right thing for everyone, this was exactly what Chris and I wanted – an intimate ceremony in a gorgeous location with family and friends. I’ll share more pictures of the whole group next week and also tell you more about the evening celebrations, the rest of the holiday at the Maritim and the move to a different hotel for our honeymoon.

What I did promise is a list of the products I used in the countdown to the wedding.

Sun care was paramount, and I used my usual Ultrasun Tan Accelerator 30 for the face and body. Chris actually used the same on his face but opted for the Ultrasun Sport 30 for his body – neither of us burnt at all and we both came home phenomenally tanned. As I mentioned, I had Philip Kingsley Elasticizer in my hair for the whole of my wedding morning but I had also used it a couple of times prior to the event and on our honeymoon too. Sophie did my curls on the day – I think she did an amazing job seeing as we hadn’t had a practice run at all. My hair slide was Butler & Wilson and I also wore a B&W Panja bracelet as my something ‘borrowed’. Blue was the sapphire the lovely Alison O’Reilly had generously set inside my beautiful wedding band, old was the feather necklace my friends who were at the wedding, Nat and Teresa, had bought me for my 60th birthday and new was a pair of silver feather earrings my mum treated me to.

Anyway, back to beauty… if you haven’t tried Philip Kingsley, we have a TSV coming up on Tuesday, with the gorgeous Rose and Lychee fragrance. And Rose also features in the Elemis TSV, this coming Sunday, which is already on pre-order.

The rose facial oil is new, but the rest of the collection are favourites, with the emphasis very much on hydration; Pro-Collagen Marine Cream Ultra Rich, Oxygenating Night Cream and Pro-Collagen Advanced Eye Treatment. I am so looking forward to seeing Keeley on Sunday at 11am. In Mauritius I was using my Elemis Pro-Definition Facial Oil and Overnight Matrix to help my skin recover overnight, along with a pre-evening meal treat of Decleor Aromessence Solaire topped with L’Occitane Immortelle Divine Cream. I also was lucky enough to have a few foot massages with L’Occitane Foot Cream, courtesy of the groom, and a couple of back massages with Decleor Svelte Oil – my back needed to look good in my dress.

On my fingernails, I wore OPI Bubble Bath Nail Envy and on my toenails I had the Nails Inc bluey/gold colour from the recent TSV because Chris said he liked it!

My husband and I returned from Mauritius last Saturday and I must admit it has been difficult to settle in to any kind of routine after so long away. How nice then to have the prospect of the Butler and Wilson 50th Anniversary party to look forward to on Tuesday evening.

Because we are limited to the number of photos we can have in our blogs I can only post this one of Simon and myself from the sparkliest party I have ever attended but do check out some of the other presenter blogs as I’m sure they will have posted more. Debs, Jill, Ali K, Ali Young, Will, Dale and Clare were all there on the night along with lots of our fab QVC guests and models. I was very honoured to be featured in the video running all night in the QVC section of the fifty years of Butler & Wilson – if I can get hold of a copy I’ll try and put it on next week’s blog. Simon also kindly called Chris and I forward during his speech to congratulate us on our marriage. Just as another aside, I wore the ‘bride to be’ veil Simon made me wear in our show on the 18th, on the night before our wedding in Mauritius, so he was there in spirit.

Well, I’d better finish there as I need to head into QVC for Fashion Day, including my first Fashion on Friday double-header for a while. My dressing room won’t look like this picture today, but how thoughtful of Katy Pullinger, my dressing room roomie, to decorate with bunting and balloons, not to mention the bubbly!

Hopefully I haven’t gone on about the wedding too much, but if you’ve had enough of it maybe skip next week’s blog with the second instalment.