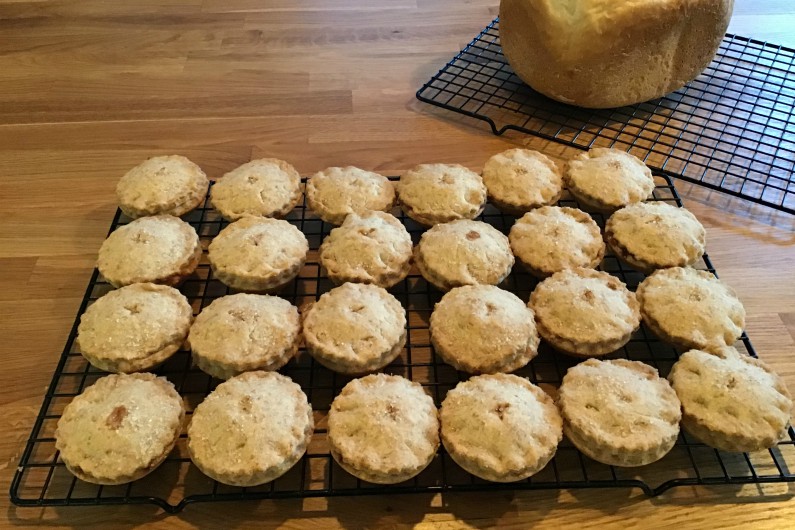 Isn’t it funny that one thing can suddenly make it feel more like Christmas – usually it’s when I make the Christmas cake, but this year I have been so busy with QVC and writing my latest book that I didn’t really get into the festive spirit after baking the cake, even with the gorgeous aroma and the lashings of brandy it received. However, on Wednesday morning I made my first mince pies of the year (recipe later in the blog) and this morning we are going to buy the Christmas tree – now it feels like Christmas, even without snow!

If you’re not feeling it yet, take a look at the second Presenter Festive challenge, where we had to name Santa’s reindeer in thirty seconds! I thought Debs Flint and I did quite well, but we were pipped at the post…

I quite like the idea of ‘Flasher’ as a reindeer name – maybe Santa should enlist some new helpers?!?

Well, I don’t know about you, but I have been doing quite a bit of QVC Christmas shopping, my latest purchases being two Luxenoa candles – I couldn’t possibly tell you who they are for but I can confirm they both they smell divine! We also received some Snowdonia cheeses and the Velvetiser this week, the latter being our ‘wedding present’ from my mum. It arrived on Tuesday and we ‘christened it’ straight away on Tuesday evening… Chris had milk, I had 70% and our son had hazelnut – successful all round. We used almond milk and it worked perfectly. We won’t be using it all the time, but how nice to have it there for a little treat when we fancy one, especially if we do get snow this winter.

There is something so cosy about snuggling up on the sofa with a hot chocolate drink when it’s cold outside. Although, I discovered on air this week that fashion guest, Glen Campbell has never had hot chocolate!!!!

I also discovered that Glen’s favourite snack at this time of year is a mince pie and a cup of tea. This was after he moaned about me not bringing him a mince pie in after my baking bout that morning. I will take him one in today as we are working together for fashion on Friday – do remember that we now have a specially selected item to start the 5 p.m. show, which will be on FIVE easy interest-free instalments (same on Saturday and Sunday at 5 p.m. too).

But back to mince pies, and as promised, here is my recipe:

This is my weekend off but don’t miss out on some of the great Today’s Special Value offers we have between now and when I’m next in on Thursday. Lovely Fiona Brackenbury will be launching the Decleor TSV on air tonight at 9 p.m. – it’s already been selling very well on pre-sell if you’re a Decleor fan.

Also, Harry Slatkin is back on Tuesday with a Homeworx TSV. I was lucky enough to work with Harry on his first visit to QVC UK a couple of months ago and as well as being beautifully fragranced, his candles look good too. And then we have a Radley purse TSV offer on Wednesday.

Purses are such a great gift idea, but do remember to include some money (preferably a coin) when you give a purse to bring the recipient good fortune – it may be an old wives’ tale but I’m not going to risk going against it!

Before I leave for work, just a heads up on this week’s Inside QVC podcast… it’s our very own beauty expert, Alison Young, and on Monday, the new one will be Simon from Butler & Wilson – something to listen to while you’re decorating the tree perhaps?? – we’ll be doing this monster tomorrow … photos next week!

Have a great weekend.