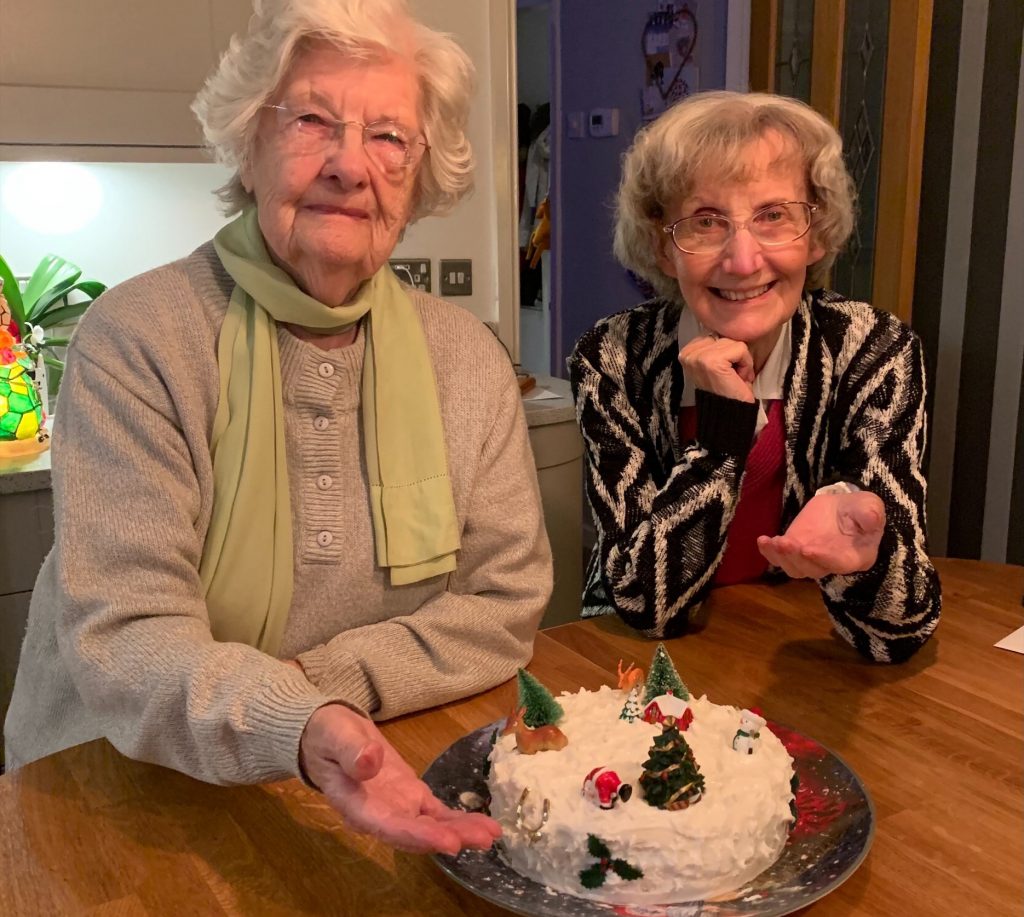 I hope you have all been able to enjoy Christmas to some degree. It’s been a strange one for me as for the first time in twenty-nine years, I haven’t been on either the Christmas or the New Year shift on QVC. The good news is that my second cataract operation of 2021 went really well and that if things continue to improve as they are, I will be back on screen on 13th January. I’m hoping for a year less interrupted by periods of sickness absence… I’ve attended no fewer than seventy-six medical appointments and nine video consultations in the past year. There will still be medical appointments, in fact my first is a brain scan on January 5th, the first since my surgery in October, but I’m hoping it will all be about returning to optimum health in 2022.

But back to Christmas for a few moments. We were very fortunate to have both our mums to stay for the festive period. It was actually their second stay this year as they both came down in August for a few days, which kind of made up for them not being able to visit last Christmas. We got them to make themselves useful by decorating the Christmas cake on Christmas Eve, something the children always did when they were younger. The decision making of what to put where took a while, but the end result was good, and it tasted yummy (even though I say so myself!)

I had some lovely presents, including an Apple watch from Chris, so that I can keep an eye on my fitness now that my ankle is in better shape. I’m back on my treadmill (up to 2.5 kilometres walking per session now) and of course I can’t do without my Aeropilates machine. Even in the early days of recovery following my major ankle surgery, I was able to perform a few exercises and it continues to be my favourite piece of exercise equipment both for my physical wellbeing and my mental wellbeing. If you haven’t tried it yet, watch out for the upcoming Today’s Special Value on January 10th – I’m not overstating when I say it could end up being a life-changing decision for you, as it was for me over twenty years ago.

The hour where I escape to my gym at the bottom of the garden sets me up for whatever lies ahead for the remainder of the day and I end my ‘session’ by singing along to a song called Clown, by Emili Sande. Those of you who read my blogs regularly know that I’m fortunate to have a very thoughtful husband, but he excelled himself this Christmas. I’m not going to lie, I cried when I opened my first present from him and discovered this beautiful cushion that he’d had made for me. I cried again at another present, which I’ll tell you about later. 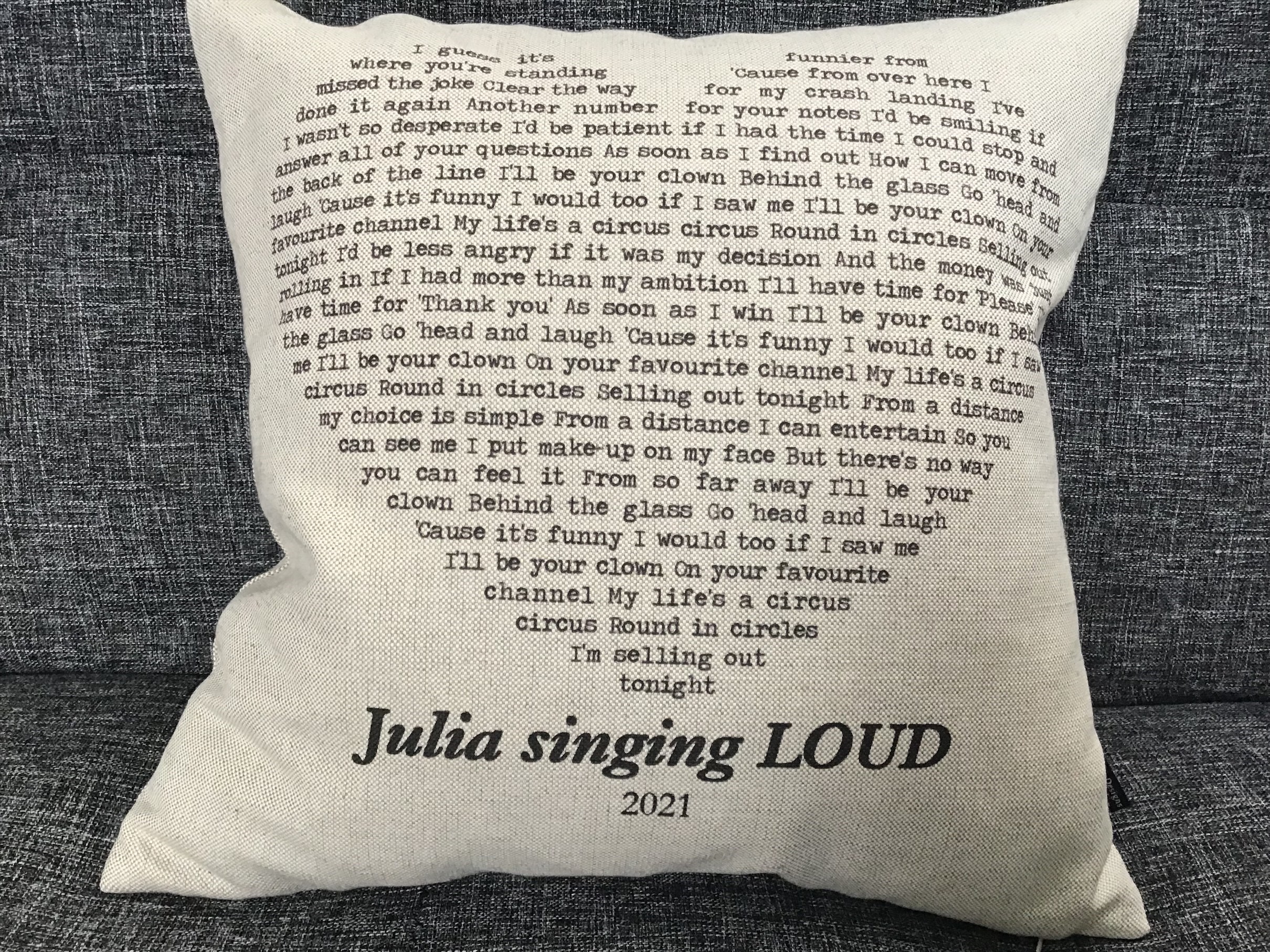 We also had our daughter Sophie and her family at ours for Christmas Day after we’d all done lateral flow tests, of course – we weren’t taking any chances around the mums even though they’ve both had their boosters. We were particularly mindful as our son Dan and his girlfriend Katie had both tested positive just before Christmas, so we weren’t able to have them for Boxing Day as had been the plan. I’m so hoping that we will be free of the restrictions of this global pandemic by the time next Christmas comes around!

So, before the year is out I thought I’d take a look back over what has been at times a challenging twelve months for me – I’m sure I’m not alone in that, and I hope things improve for you if you’ve been struggling, as they have for me recently.

January – The first ‘eye’ appointment with a local optician who discovered I had cataracts in both eyes so not the greatest start to the year, but it was also the month that My Mother’s Secret was published so it ended on a high! 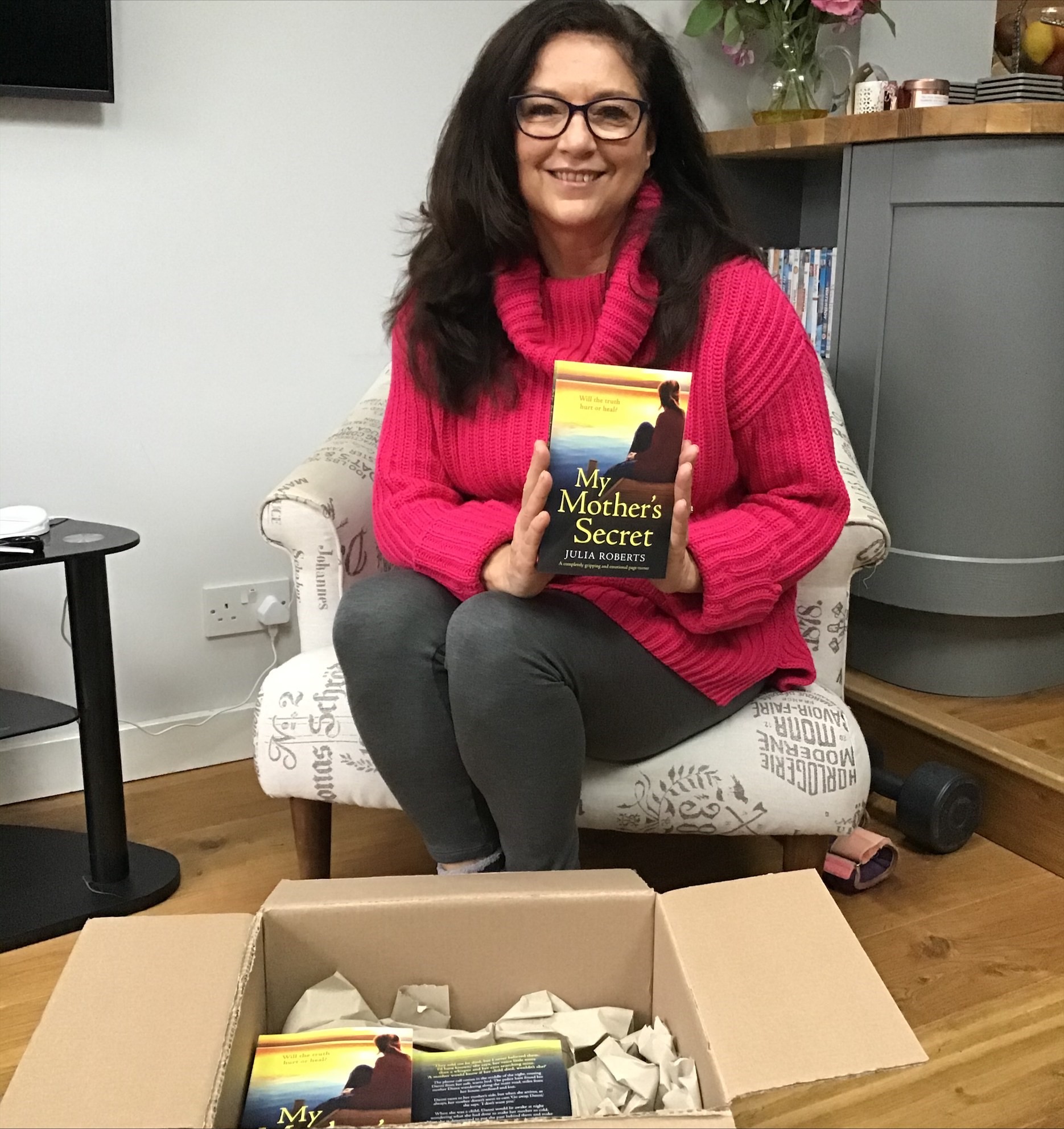 February – Our daughter Sophie and her partner bought their first home together. More eye appointments for me and the seed of an idea for Instagram Live.

March – Permission to Pry was born. If you haven’t watched it, it is an hour-long chat with a QVC guest aimed at finding out more about the ‘person’ rather than the product they represent. 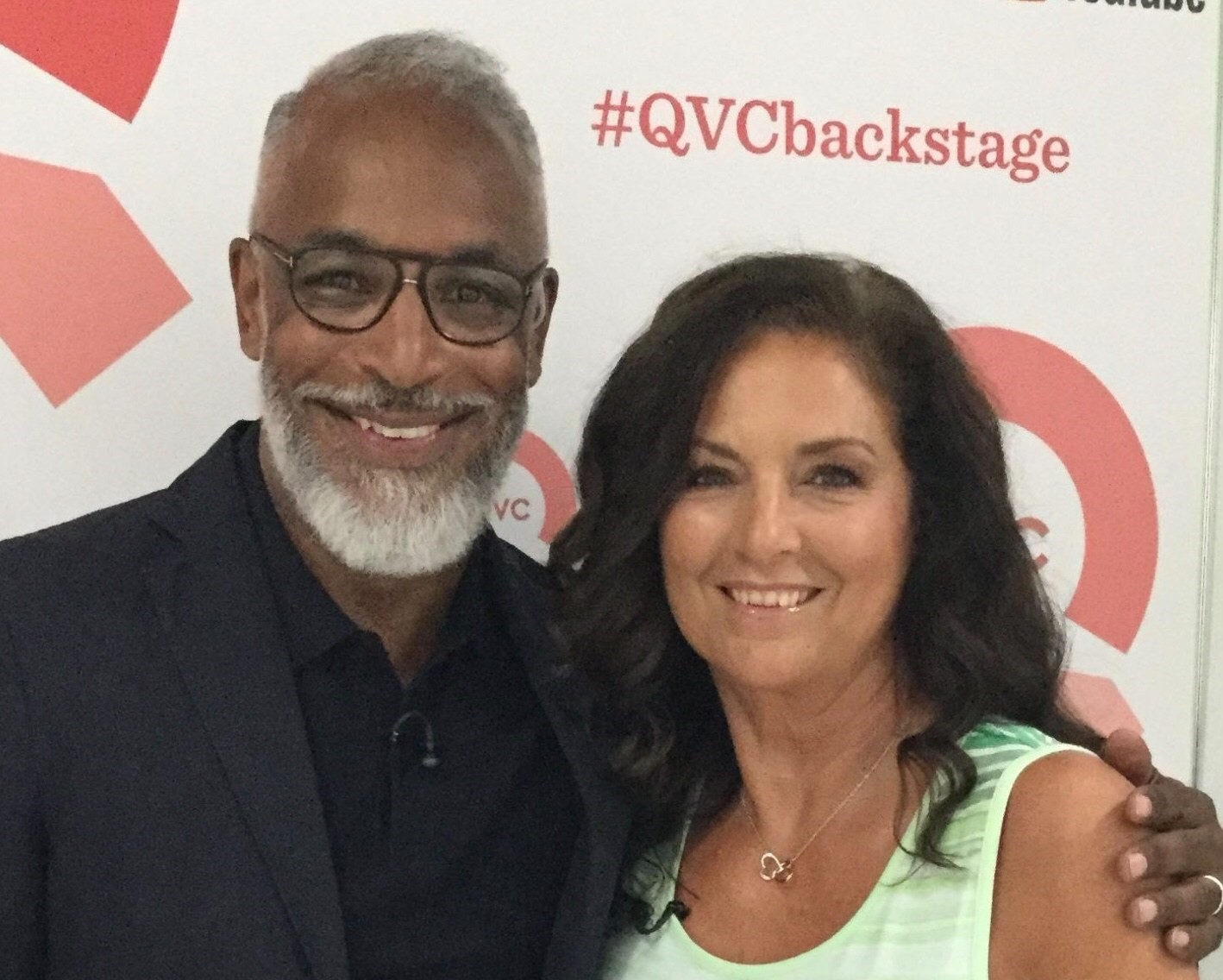 Glen Campbell was my first ever guest and for some reason his is the only video chat missing from my Instagram page (you can find the other thirty by tapping the middle button at the top of my photo grid – and yes, I did thirty-one, the last on QVC’s 28th birthday prior to my brain surgery). Do check them out, you’ll find out stuff you could never have imagined about some of our best-loved QVC guests. I’m planning on restarting Permission to Pry early in 2022.

April – A sunny Easter followed by snow a week later!

May – Our son and his girlfriend bought their first home together after living with us for the previous seven months. They also acquired a Dachsund/Jack Russell puppy who they called Quin. My first cataract operation of the year. 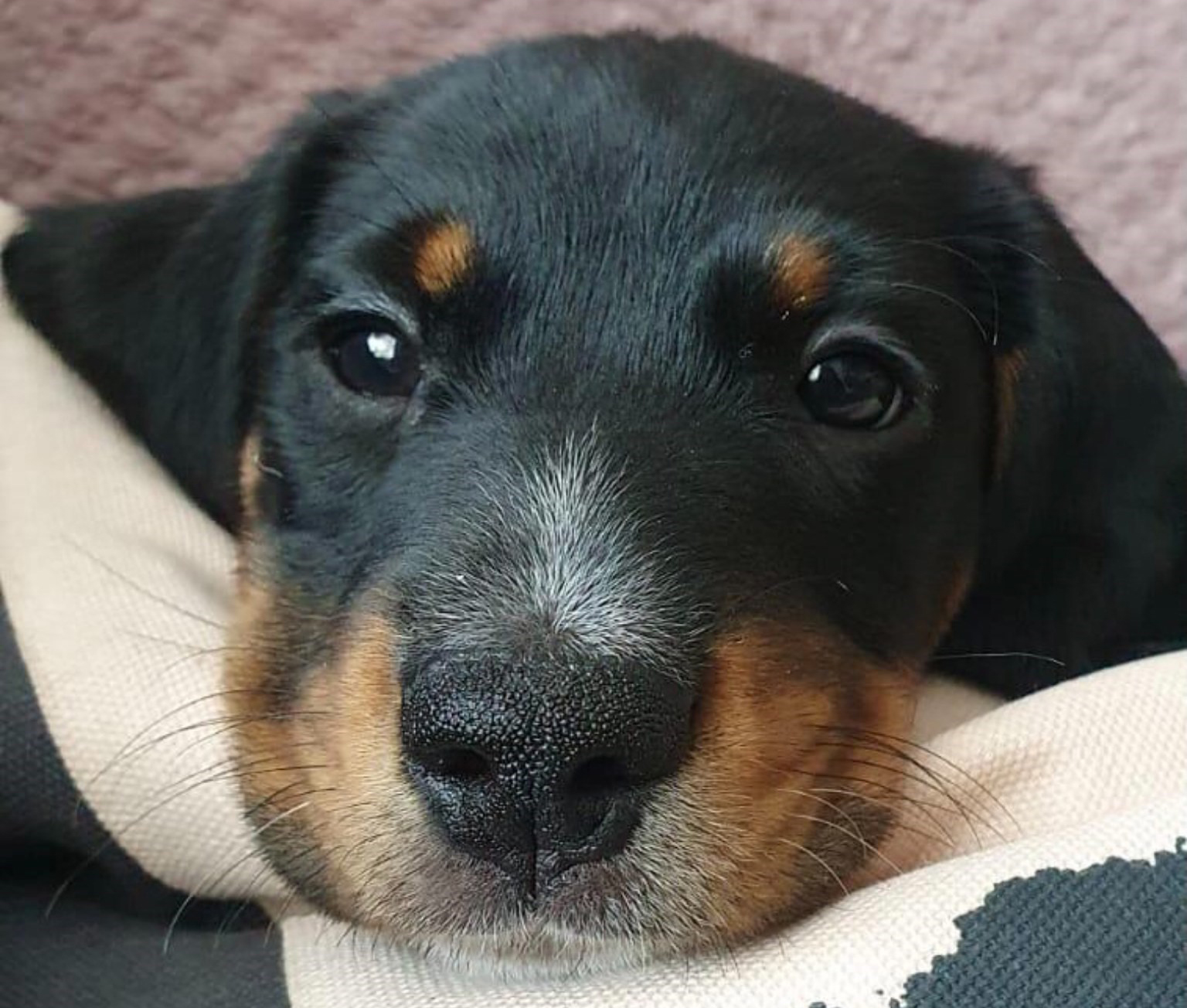 June – Lots of visits to eye specialists who couldn’t decide why I was unable to see properly! Sophie and her family acquired a Labradoodle and called him Baxter. I can’t believe he was ever this small as he’s quite a size now! 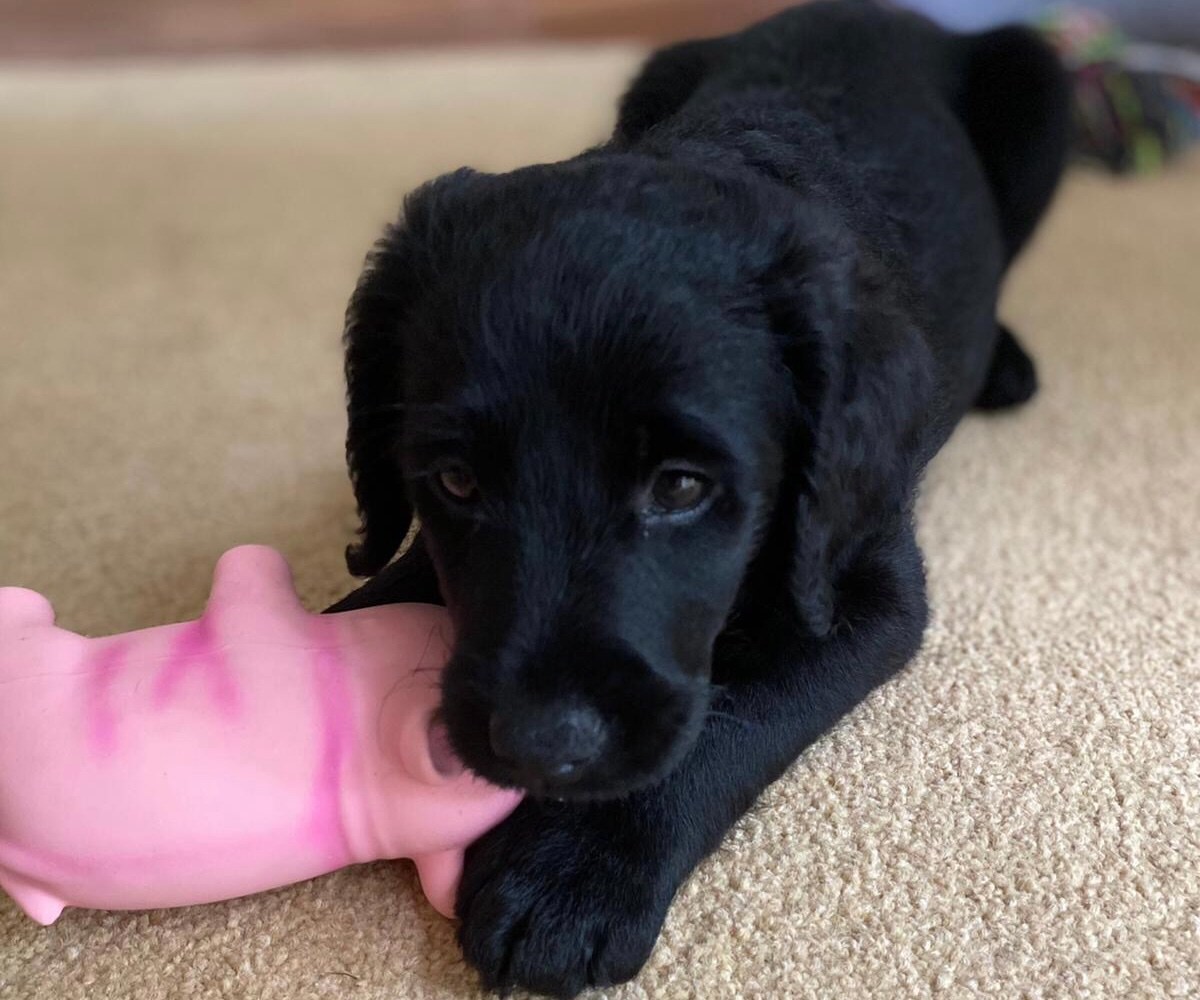 July – Wilfie came to stay for two weeks while Dan and Katie were on their holiday. I love this little face! 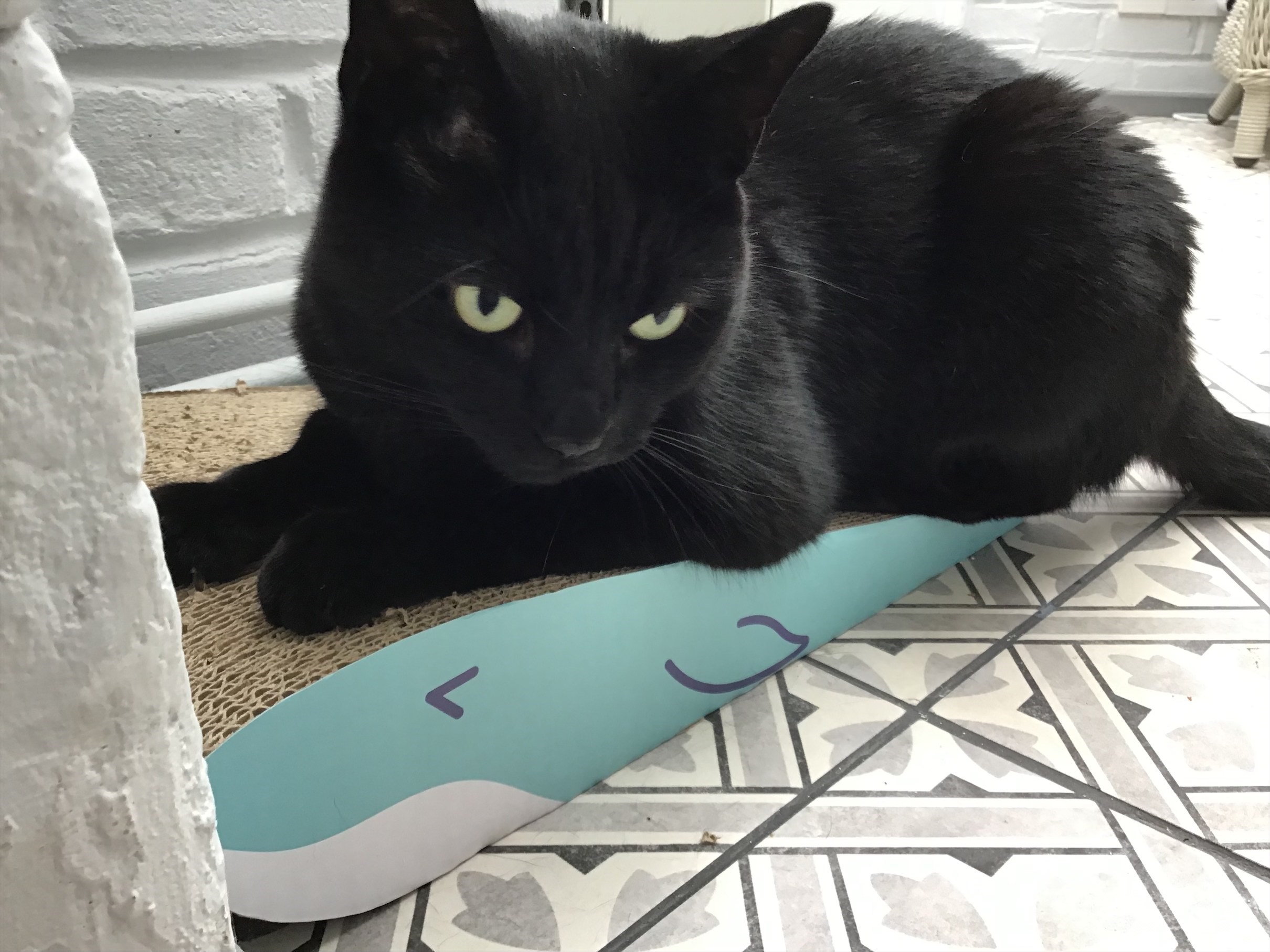 August – Our mums came to stay as mentioned previously and my second novel of the year, The Woman on the Beach, was published on the 19th – it has actually been my bestselling book so far, hitting the number one spot in various category charts and number seventeen in the main ebook chart – a real high spot of my year! Publication day was also when I found out about the brain tumour, or to give it its proper name, ‘macro adenoma of the pituitary gland’. It was quite a size and was pressing on my optic nerve hence the distortion to my vision. I feel incredibly fortunate that it was discovered before any permanent damage was done to my eyesight.

September – We managed to get to the seaside for the first time in 2021 – only for the day but it was worth it. I was the woman on the beach in West Wittering (along with hundreds of others). 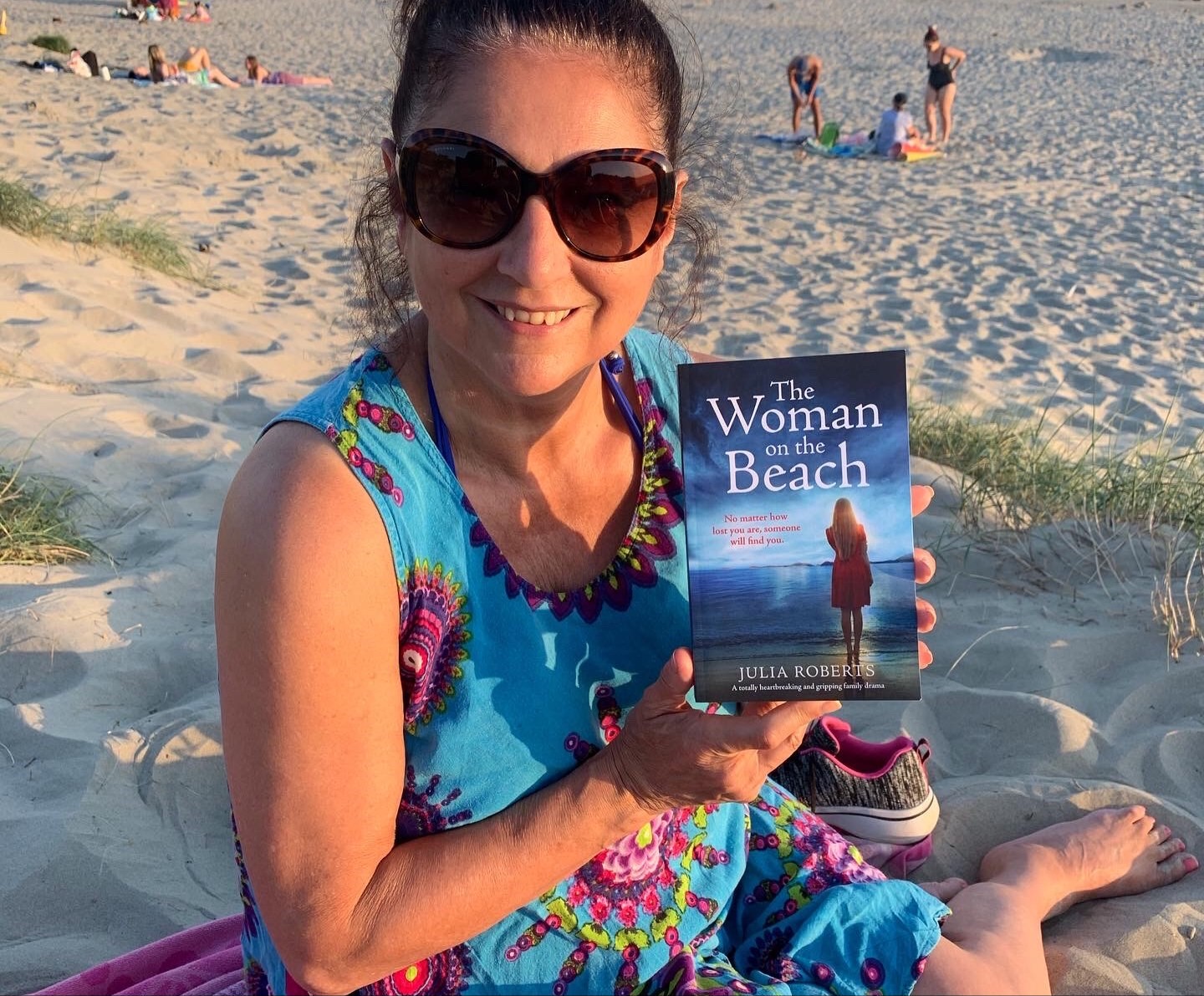 October – It was QVC’s twenty-eighth birthday on the 1st, which was my last day on air before my pituitary gland surgery on the 7th. I would like to thank all of you who sent me messages (apologies that I’ve still not managed to answer them all, but they have all been read and appreciated). I also want to thank those colleagues whose messages really helped me through a very anxious time… you know who you are. I also posted this photo from thirty years ago as a throwback Thursday on Instagram, which Chris then had cleaned up and made into this picture – my second lot of tears on Christmas Day! 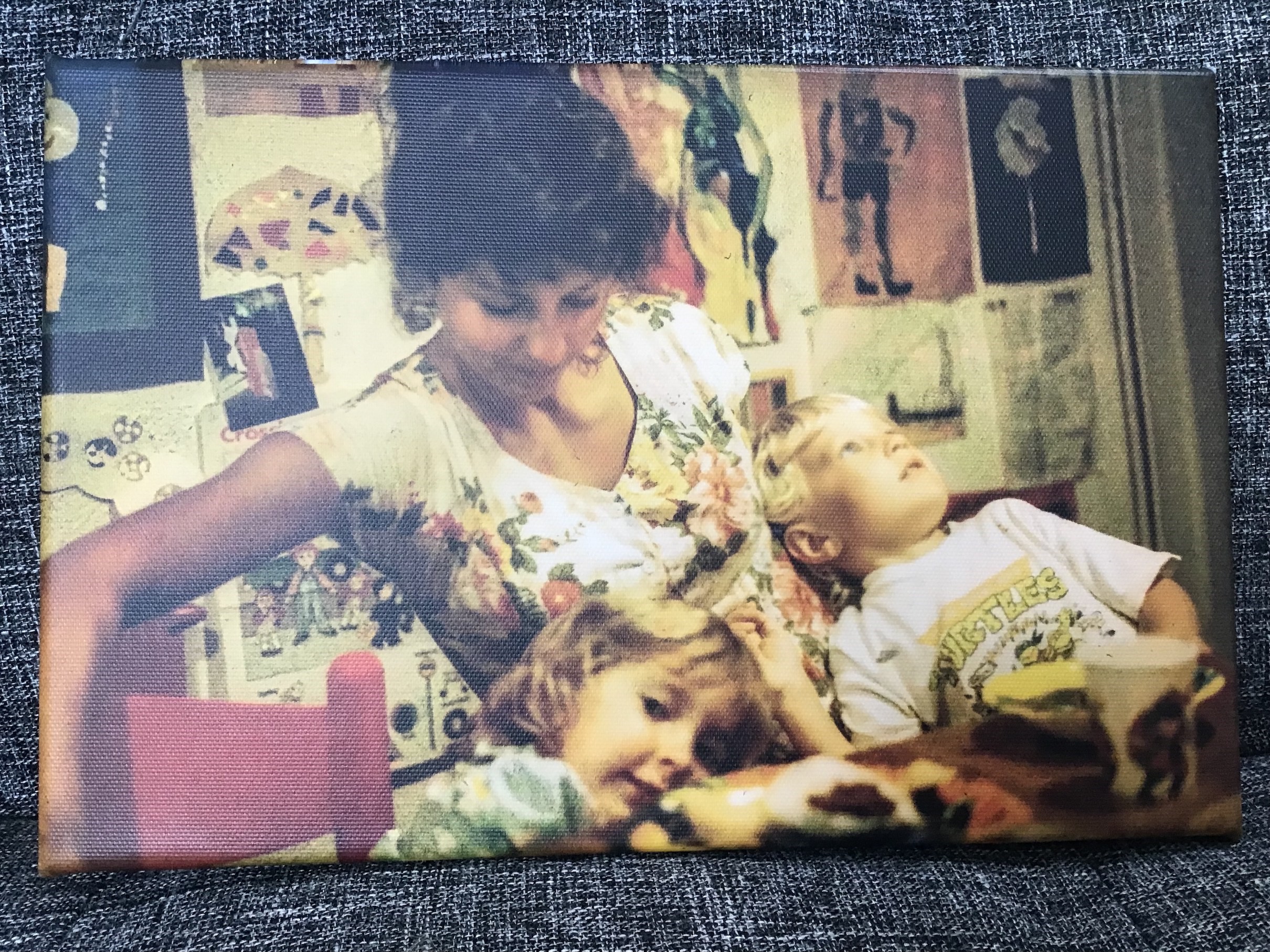 November – I returned to QVC briefly. At this point a mention for our presenter stylist, Stine, who takes some lovely photos of a very reluctant model (me – so I use the word model lightly) to post on Instagram. I had loads of nice comments about this MarlaWynne outfit, including from my mum. 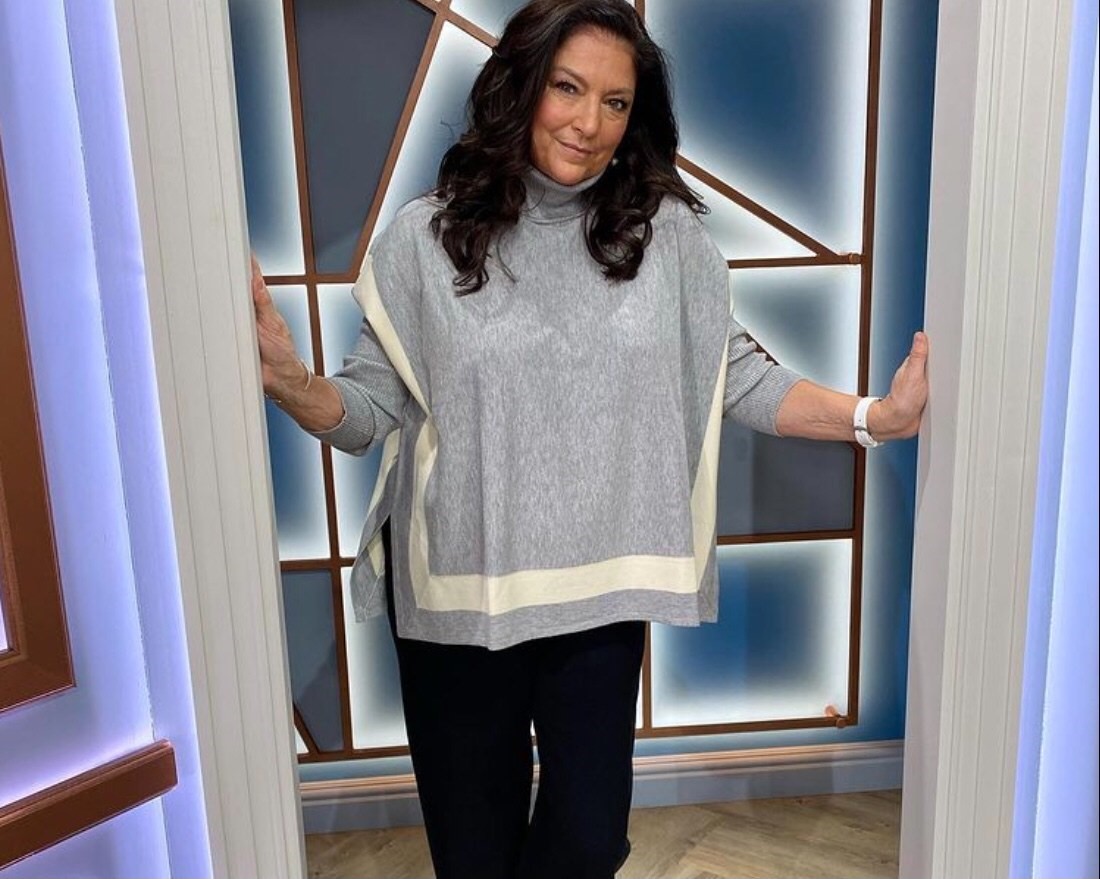 December – My eye doctor managed to squeeze in my second cataract operation of the year so that I could have a fresh start ‘eye wise’ in 2022.

So, 2021 was a mixed year for me but one that has certainly made me appreciate how important good health is. With that in mind, I’ve determined that in 2022 I will make more time for relaxing and watching the birds feed on The Grumpy Gardener fat balls, which has brought me enormous joy this year. If your birds haven’t tried them yet, give them a treat, especially as they are going to be at a reduced price this January.

Yes, I have books to write and a full-time job at QVC, but Chris and I need ‘us’ time, which will hopefully include a proper holiday now that my eye issues are sorted – only another two weeks before I’m allowed to go swimming!!!!

Thank you for shopping with us this year, for reading my blogs (and books if you do) and for all the kindness you’ve shown me this year.