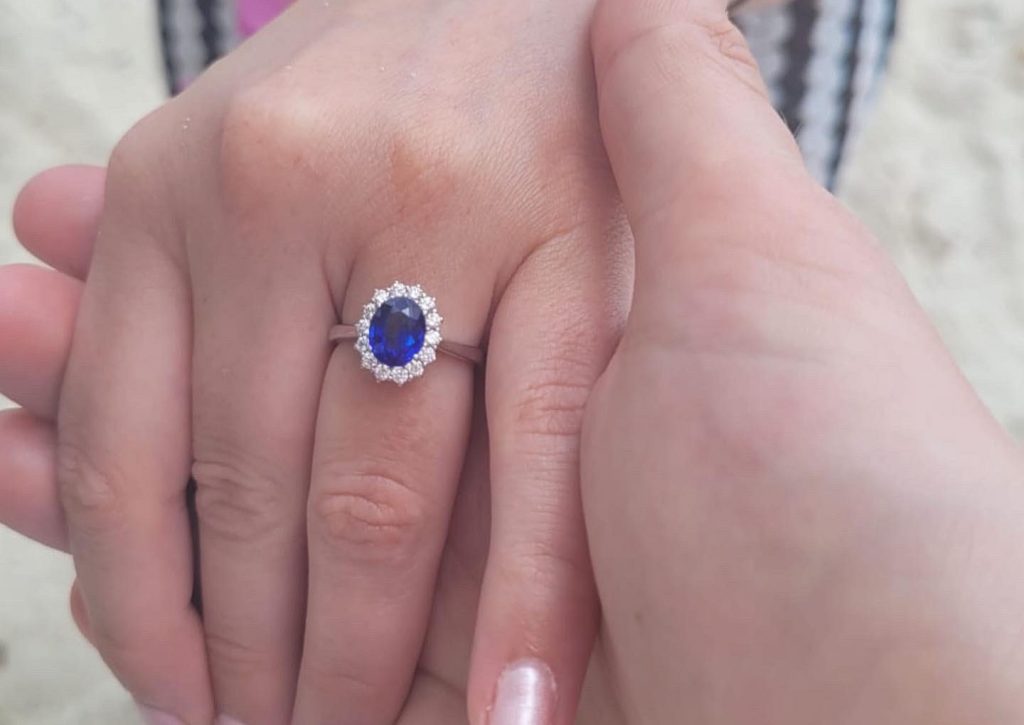 I’m starting today’s blog with some lovely family news. While they were away on their dream holiday in the Maldives, which had been postponed by a year due to the pandemic, my son, Dan proposed to his girlfriend, Katie and she said yes! We are so happy to be welcoming Katie into the Maxwell family – as my mum put it when they rang to tell her the news within hours of getting back from holiday, ‘she’s one of us’, which I hope is a good thing! 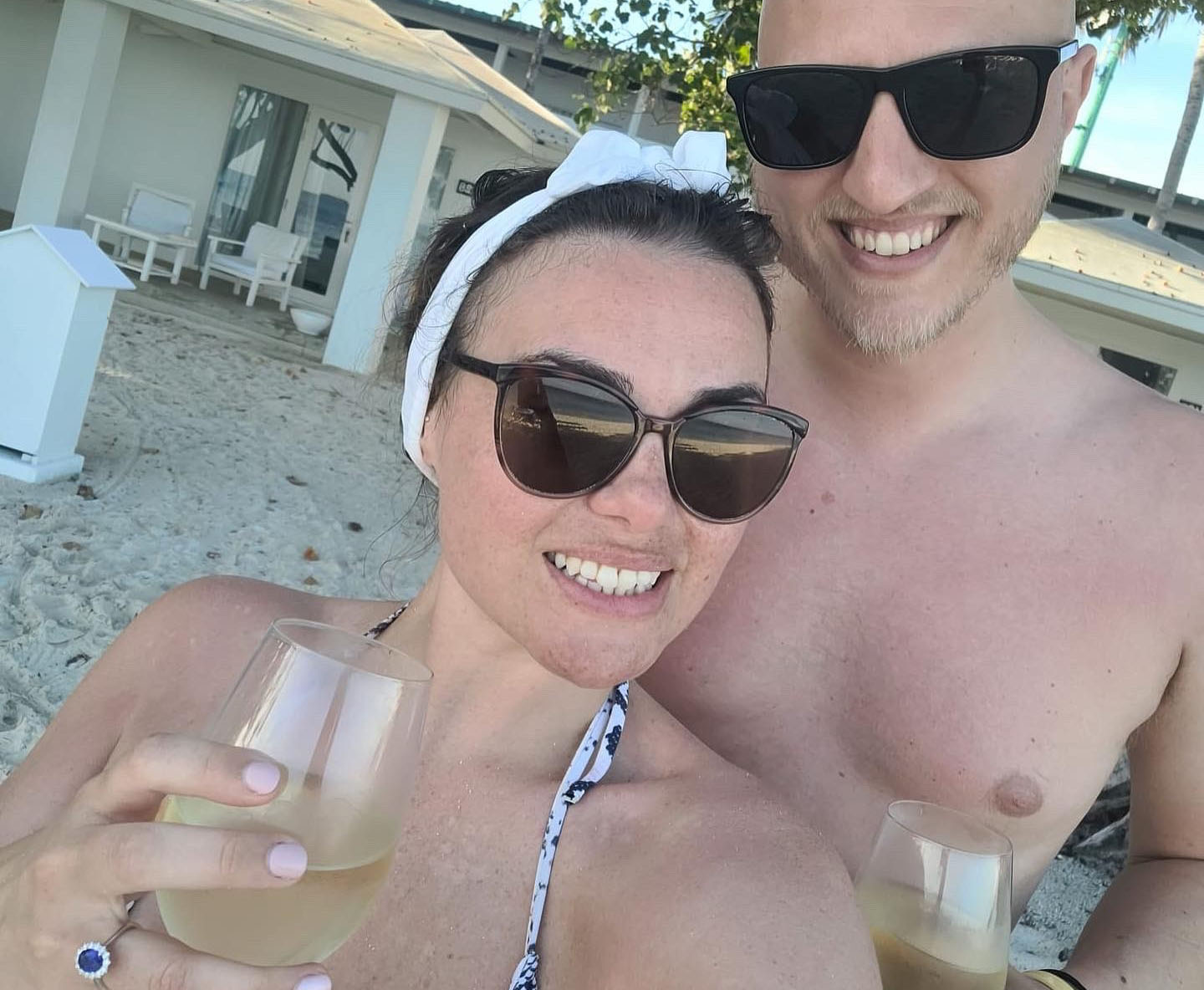 I have to say a big thank you to our fabulous Alison O’Reilly, who designed the stunning ring which Dan had to smuggle out to the Maldives in his sunglasses case so that it would be a surprise for Katie. She had expressed an interest in having a sapphire ring if they ever got engaged as that is the birthstone for September, the month they first started dating. I’m sure you’ll agree, that is not just any old sapphire… it’s truly a stunner!

Alison also designed my beautiful engagement ring and, as mentioned in my previous blog we celebrated the fourth anniversary of our engagement earlier this month. I also mentioned that I had another anniversary approaching.

It’s ten years since the 360 health check that highlighted an ‘issue’ with my blood. I took the call on Friday 13th April while I was at work and on Monday 16th April I was at UCLH for further blood tests. The bloods were checked while I waited, and I was then called back into Dr. Gavin Ling’s office where I received a preliminary diagnosis of suspected Chronic Myeloid Leukaemia, which could be confirmed by undergoing a bone marrow biopsy that he recommended I had there and then. 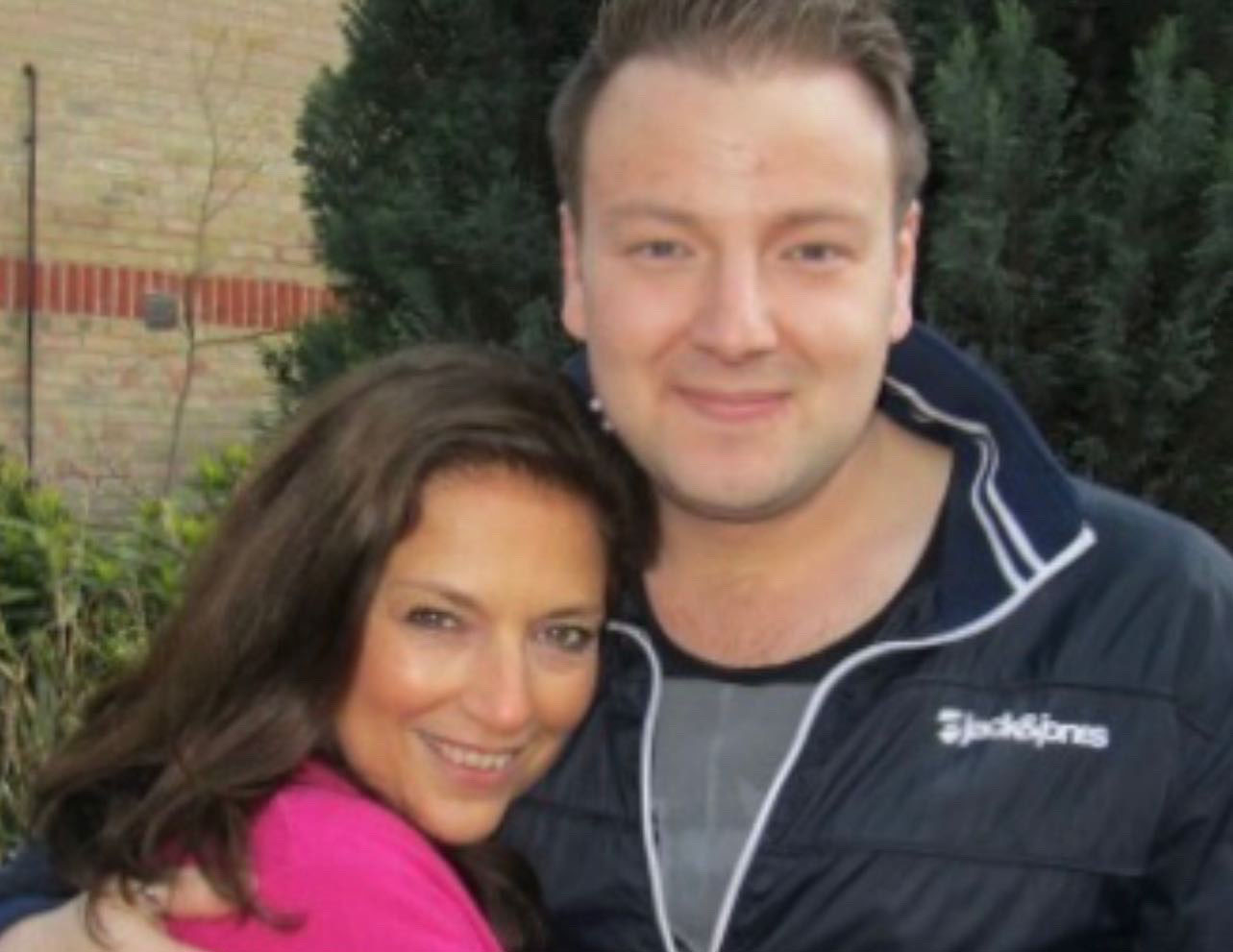 This photo was taken the next day. It was at the leaving do for one of my favourite ever people that I’ve worked with in my 28 plus years at QVC, Dickie. I was feeling quite fragile, both emotionally and physically, but there was no way I could miss his send off. I hadn’t mentioned to anyone what had happened the previous day, but I’m fairly certain Dickie knew something was up.

My follow-up appointment for the results of the biopsy was with Professor Anthony Goldstone on April 26th. It confirmed the preliminary diagnosis, and my treatment began immediately. I always remember the ‘prof’ saying in answer to my question about prognosis, ‘You’ve got a good fifteen years if you respond well to treatment. You should easily make 70!’ It seemed a long way in the future, but I’ll be 66 in June so I’m rather hoping he was erring on the side of caution.

What his words did do though, once I started to feel okay after the initial onslaught of the oral chemotherapy drugs, is spur me on to do things I’d always wanted to do. Like writing my books, who knows if Life’s a Beach and Then, my first book would ever have been started, let alone finished and self-published if I hadn’t had that time limitation hanging over my head. I’m currently almost done with the first draft of my tenth novel, which is due out in the autumn. By the way, if you live in the Margate area, I’ve been invited to be a guest speaker at the Birchington Literary Festival on May 1st, which is an appropriate date, as it’s a first for me.

So, having seen plenty of my family over the Easter weekend, we’ll be meeting up again next Tuesday to celebrate me making it through another year since diagnosis. We may also raise another glass to the happy couple (there have been quite a few already) and toast our daughter, Sophie, who is about to start a new job. It’s all happening for the Maxwells at the moment. 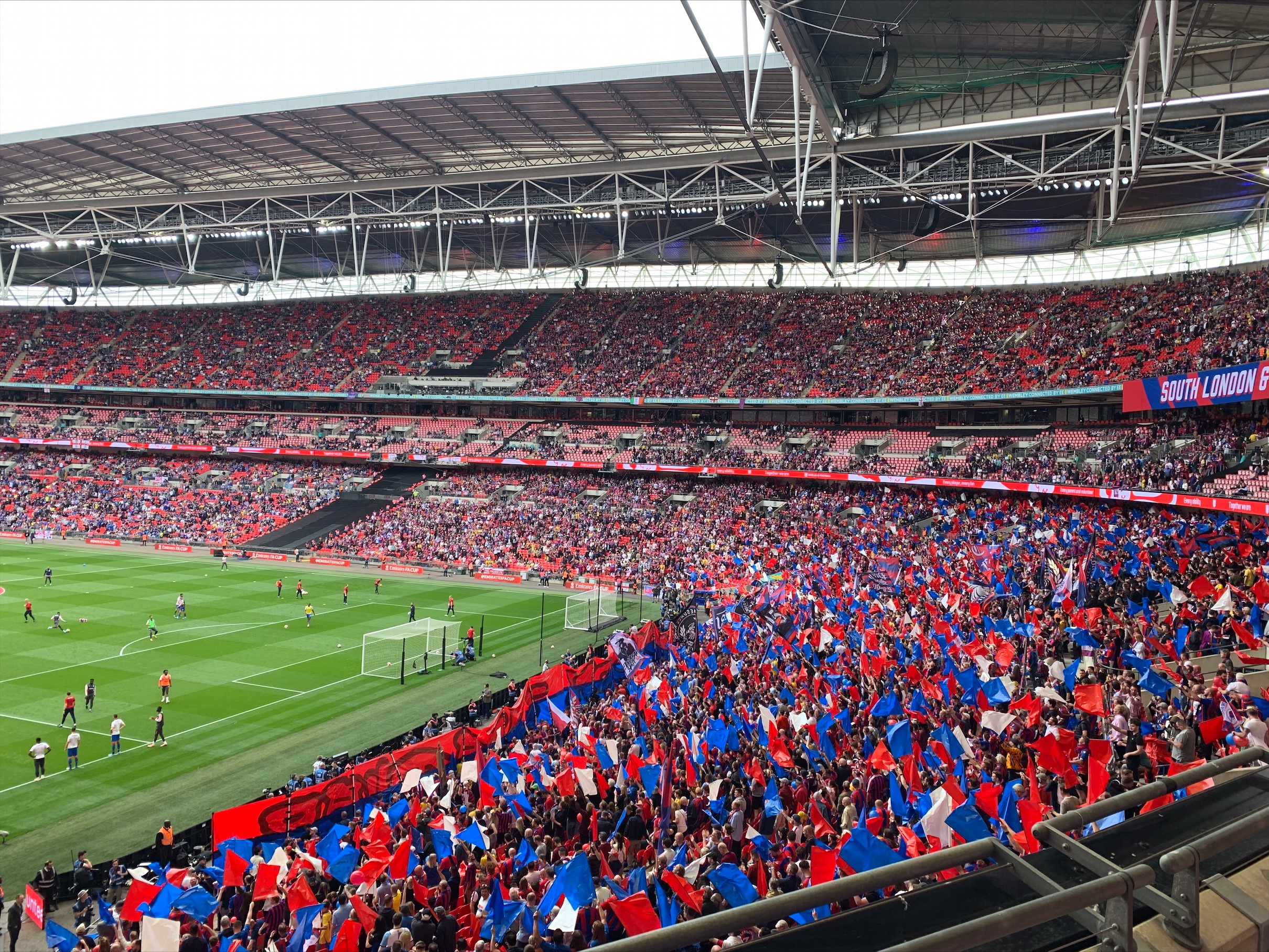 One thing we won’t be toasting is Crystal Palace in the final of the FA Cup. Dan and I went to Wembley for the game last Sunday but despite the amazing atmosphere created by the ‘red n blue army’ we just couldn’t manage a win on the pitch.

I’m still so proud of what my team have achieved in their first season with Patrick Vieira at the helm. 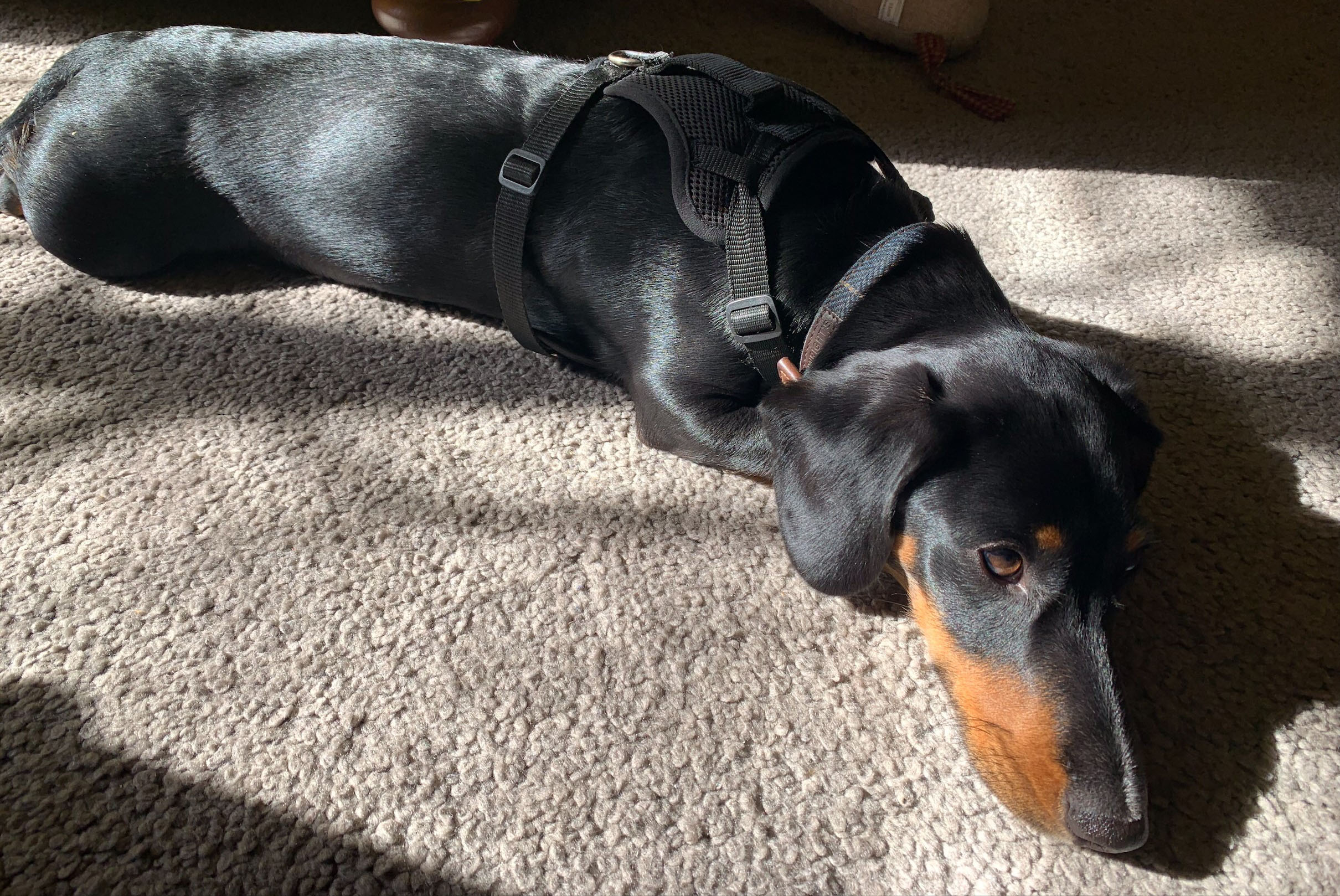 Well, the house feels very quiet now that Quin and Wilfie have gone home from their ‘holiday’ with us. It was lovely having them to stay, but it did make me realise that a dog is much harder work than a cat! 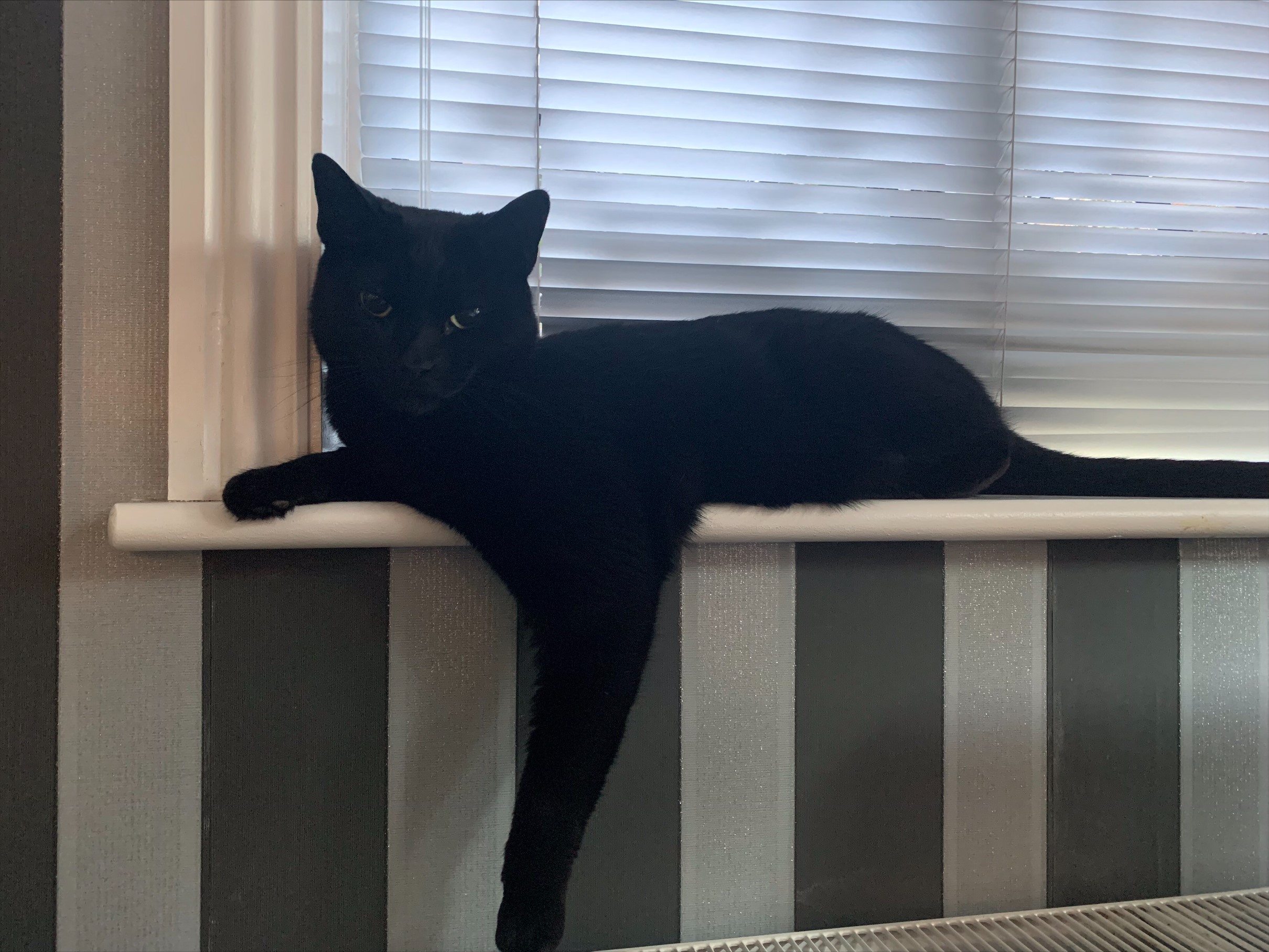 I’ll also be scattering some Richard Jackson grass seed in the little brown patches (not sure where they came from) after the Richard Jackson Moss Killer has had a chance to work. It’s been so lovely to get out in the garden in the fabulous weather we’ve had, albeit for short breaks from my writing desk!

I’m heading into work shortly for my shows, including the Fashion on Friday double-header at 5pm on main and 6pm on Style. I had loads of compliments on the Finery dress I wore last week. I’ve been hankering after it for a while and finally took the plunge getting in both the red and the navy stars option. Finery is fast becoming one of my favourite brands, although Monsoon have some gorgeous styles this season. 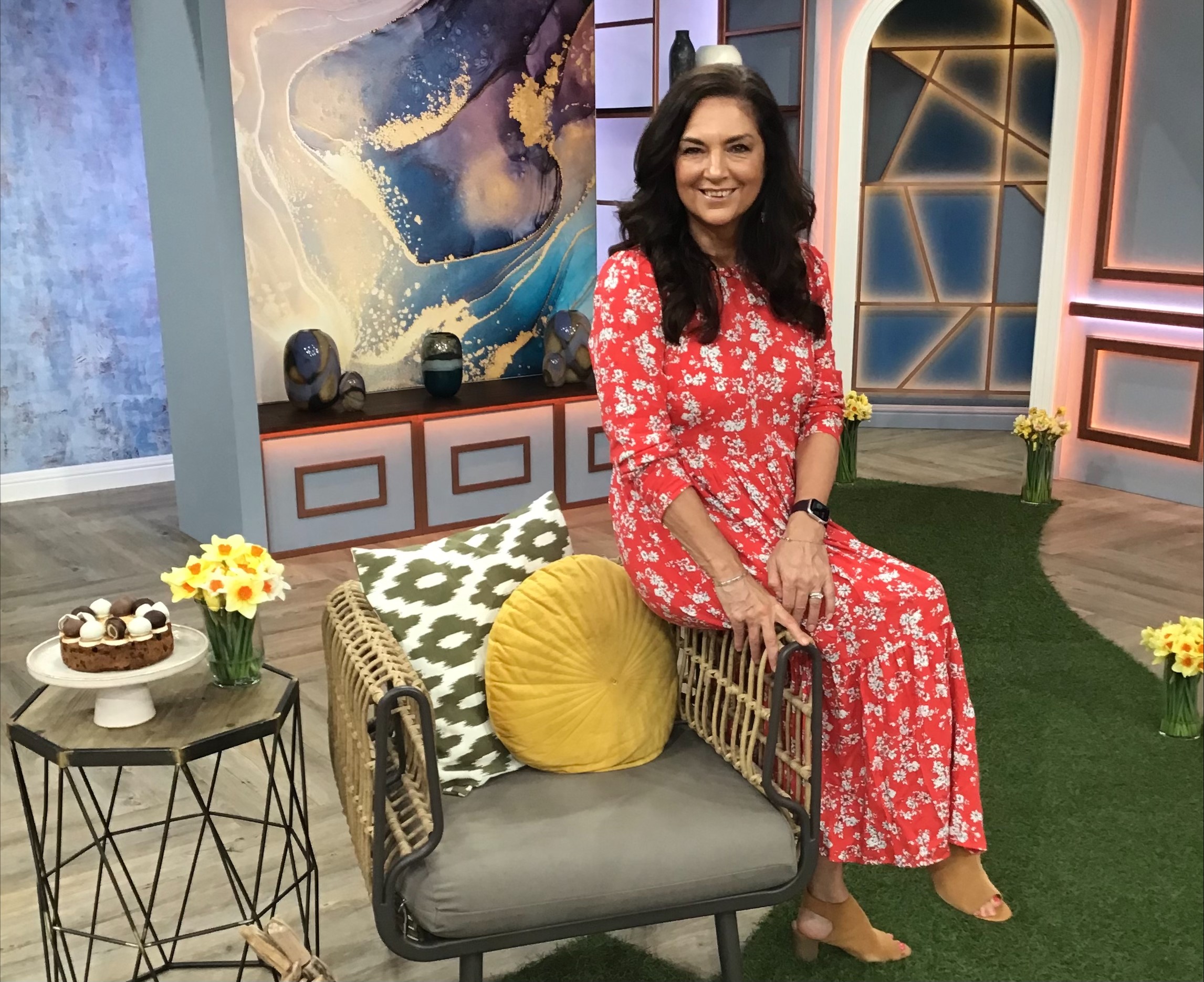 If beauty is your QVC ‘thing’ though, I hope you can join us this coming Sunday. We have some of your favourite brands, featuring Molton Brown, Nails Inc, Liz Earle and Laura Geller to name but a few and the Philip Kingsley Today’s Special Value on the day is already available to order on our website. It’s featuring a gorgeous Mango and Hibiscus fragrance which smells like an exotic holiday! There is 500ml of the Body Building Shampoo, 500ml of the Moisture Balancing Conditioner, and 150 ml of the Elasticizer, all in the fragrance, plus 150ml of the Elasticizer Booster Conditioning Treatment, which you use in place of regular conditioner between Elasticizer treatments. If bought individually from Philip Kingsley, it would be £160 so our Today’s Special Value price is saving over £100 and it’s on five interest-free easy payments to spread the cost. 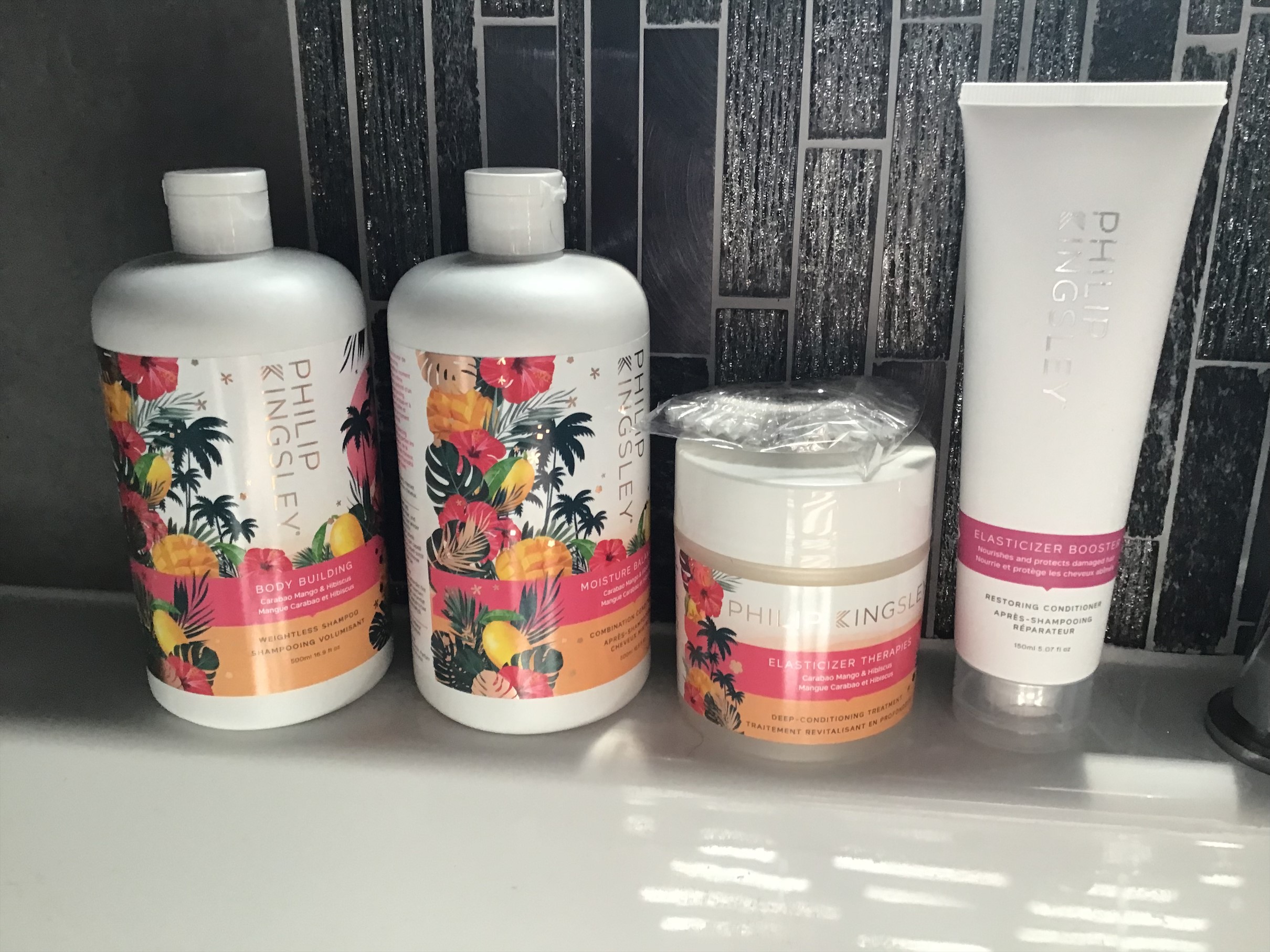 Just a quick mention before I go of a new beauty product featuring this weekend. The brand is Frances Prescott and the product I’ve tried is called TRI-BALM. It cleanses, exfoliates, and moisturises and is a balm in a stick. I’ve applied it all over the face and left it for ten minutes, which is a pleasure because it smells divine. 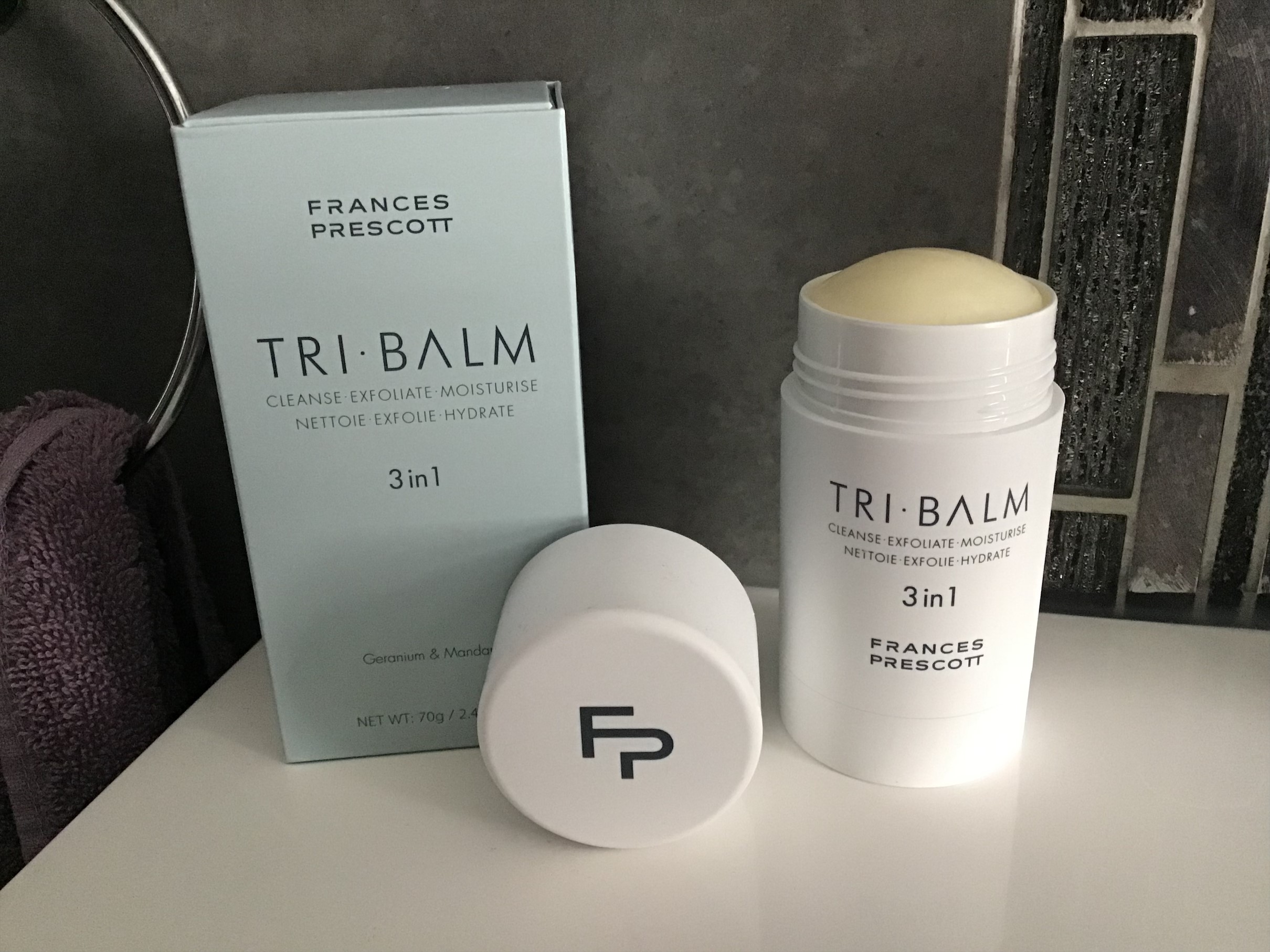 Enjoy the weekend and of course Bank Holiday Monday on May 2nd and I’ll be back with my next blog in a fortnight.