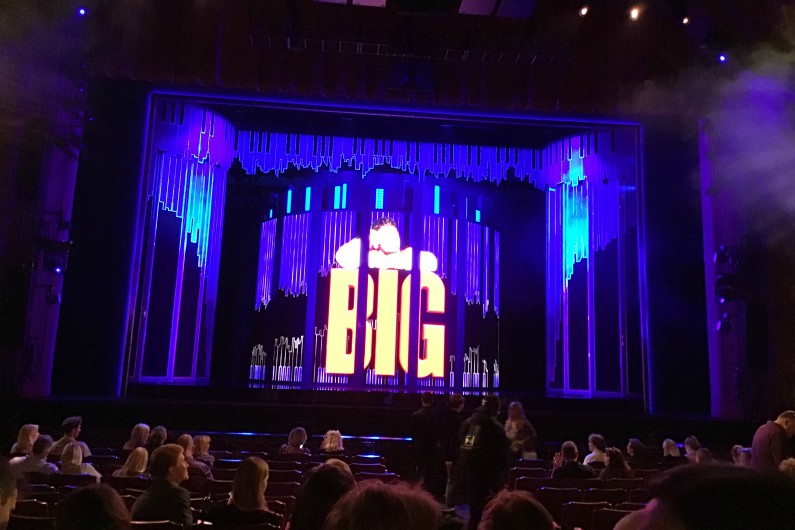 As I mentioned on last week’s blog, I had a trip to the theatre this week to see Big The Musical, which was a birthday gift from my family. I absolutely love the film so when I heard it was coming to the West End as a stage show I got very excited and my son picked up on it and came up with the idea of getting me tickets. It’s on at the Dominion Theatre in Tottenham Court Road, so I took the opportunity to tie in my latest blood test at UCLH ahead of my upcoming appointment with my professor on the 10th… they do seem to come around very quickly!

After having my blood taken, we had a couple of hours to kill before the show so went to have pre-theatre dinner at Stephen St Kitchen, which is very close to the theatre and I know is good because we had my publisher, Bookouture’s summer party there. Both Chris and I are veggie so we selected the halloumi burger (his with portobello mushroom and mine without – not a fan of mushrooms) and greens in butter which were delightful!

The show itself was good, with excellent performances from Matthew Kelly, Kimberley Walsh and Jay McGuiness, but I did feel it focussed more on the fun element of a child in a man’s body and lacked the the emotion of the film. I would still recommend it as an entertaining evening out though. We had really good seats but I was finding the theatre a little on the warm side so at the interval I was routing around in my handbag for a hair-tie… I always have one, or should that be, almost always!!! In the end I had to resort to the lanyard from my QVC work pass to tie my hair in a ponytail, which must have looked a bit odd but did the trick!

I do love a trip to the theatre and it made me think again what a good show my book Alice in Theatreland, set in the West End of London in the 1970s, would make. My husband could write the music, I could do the lyrics… we all need to have dreams and aspirations! We have another present to catch up on next week – Skyfall with a live orchestra at the Albert Hall – which was last year’s Christmas gift for us both from our children – how lucky are we!

Talking of nights out with the family, we will be going out on Tuesday to celebrate QVC’s 26th birthday. We’ve always tried to organise something as my epic journey with QVC has had a huge impact not just on my life but theirs too. Dan was six and Sophie five when QVC launched on October 1st 1993 – and I looked like this…. proof to those of you who keep saying that I haven’t aged that I most definitely have!!

You can catch up with a few of my memories of the past twenty-six years on a brand new podcast called Inside QVC, which we are launching next week and you will be able to download via your usual method if you are a regular listener to podcasts. I’ll try and get my blog editor to put a link to it on next week’s blog if, like me, podcasts are something you haven’t really got into yet. Will Gowing hosted and we had fun reminiscing – he’ll also be doing podcasts with lots of the other presenters, celebrity guests, brand founders and even the current CEO of QVC UK.

Back to our annual family celebration of QVC’s anniversary because one of them particularly stays in my mind… cute kitten pictures alert!!!!! In 2013, Sophie was in a flat share in Surbiton so we had gone to a restaurant there for our celebratory dinner. She was very insistent that we should go back to her flat for coffee afterwards, which was where we were first introduced to Wilfie the kitten, who she had rescued along with his siblings.

She asked if we might be able to look after him the following day as she was working, while she tried to find new homes for them all. I did think it was a little odd when I picked him up and was handed a cat bed, litter tray and a week’s worth of kitten food! Do we think I was conned… but who could have resisted that gorgeous face?

He is actually our son’s cat but those of you who read my blog regularly know how much I adore him and he’s still pretty cute as an adult – Wilfie that is, although they both are, of course.

I have a couple of Celebrate With Us Shows on Tuesday at 11 am and 1pm and there may just be one of our special ‘flash’ promotions running for the day – sshhh, I didn’t tell you, but well worth tuning in.

Before that, we have a busy and potentially very entertaining weekend with some great offers. Mally is back for several shows over the next couple of days with RuPaul – yes, THE RuPaul from the TV show RuPaul’s Drag Race. Chloe and Jill have shows today and I have one tomorrow at 2pm. I’m also on the hour before with the L’Occitane TSV, launching on air tonight at 9pm but already available on our website on pre-launch. It’s a beautiful four-piece collection which is gift boxed and is particularly exciting, as we have a his or hers option. For the ladies, it is the limited edition Herbae fragrance, a fresh green floral, and you get a 50ml Eau de Parfum, Shower Gel and Body Milk in 250ml size and a 30ml Hand Cream.

For the gentleman it is Cedrat, which is a woody base with citrus notes, and the collection is 75ml Eau de Toilette, 30ml After Shave Cologne, 250 ml Shower Gel and 130ml Spray Deodorant.

Whichever option you go for, it is less than half price and on three Easy Pay interest-free instlaments. That could be a couple of presents ticked off your Christmas list if you like to get organised early.

Sunday’s TSV is completely different – we are talking a cordless vacuum cleaner from Shark who are taking the cordless market by storm.

I have a show at 5pm so hopefully we will still have stock available, following on from which, I have a new show for QVC UK, Harry Slatkin Home Fragrance. He’s been on QVC US for years and is described by the New York Times as the “king” of home fragrance – if you have a look online you will see that he has lots of celebrity fans, including one of the most famous chat show hosts in the world… initials OW, to give you a clue. I am a massive ‘candle’ fan, we light them every night at home for ambience, so I’m looking forward to that show immensely.

There is our birthday on Tuesday, with a rather tasty TSV if you are a Lindt chocolate fan, and then our two-day Winter Fashion Event where we have reduced the P&P to £1.95 – in fact you can already shop the event with reduced P&P online. The event also sees the launch of Gok Wan’s own range for us, WULI:LUU, as the TSV on Thursday – exciting!

Ask me again how QVC has changed over the past twenty-six years and I would have to say one of the biggest things is in the number and diversity of ranges and brands we now offer. If you’ve been with us for the whole journey, thank you for staying on board and if you’ve just jumped on, I can promise you a voyage of discovery ahead.

Apologies that I haven’t managed to get around to replying to all your lovely wedding comments – I have read them all and hope to respond over the weekend – I’ve been working through them backwards!