The day my life changed 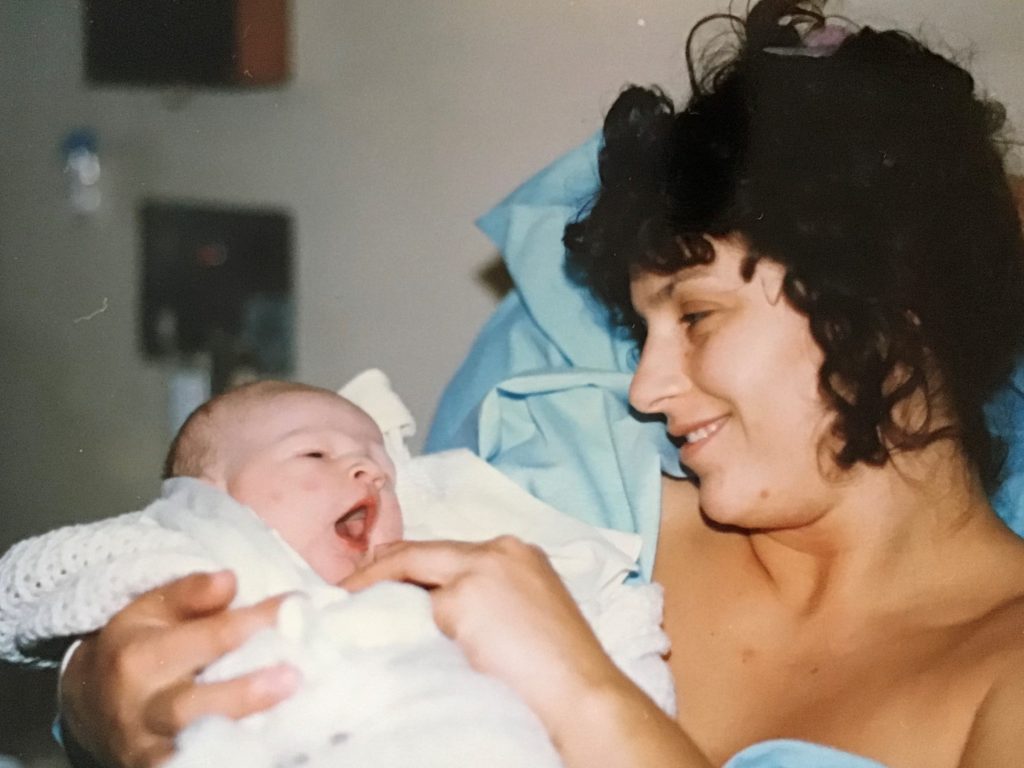 Two days ago, my son, Dan’s best friend from school Phil and his wife Rachel had their first baby and I sent them a congratulatory message adding, ‘Your life has changed forever’. I know this because that’s what happened to me thirty-four years ago today; the day that Dan was born. The picture of us above was taken a few minutes after he was born when all the pain of the previous eight hours disappeared as I gazed as this amazing little human and felt a different kind of unconditional love; the love between a mother and her child. It’s something I was able to draw on for my latest book, which coincidentally went on pre-order on the 27th October and is published on the 27th January – maybe it’s a good omen, not that I’m superstitious or anything! 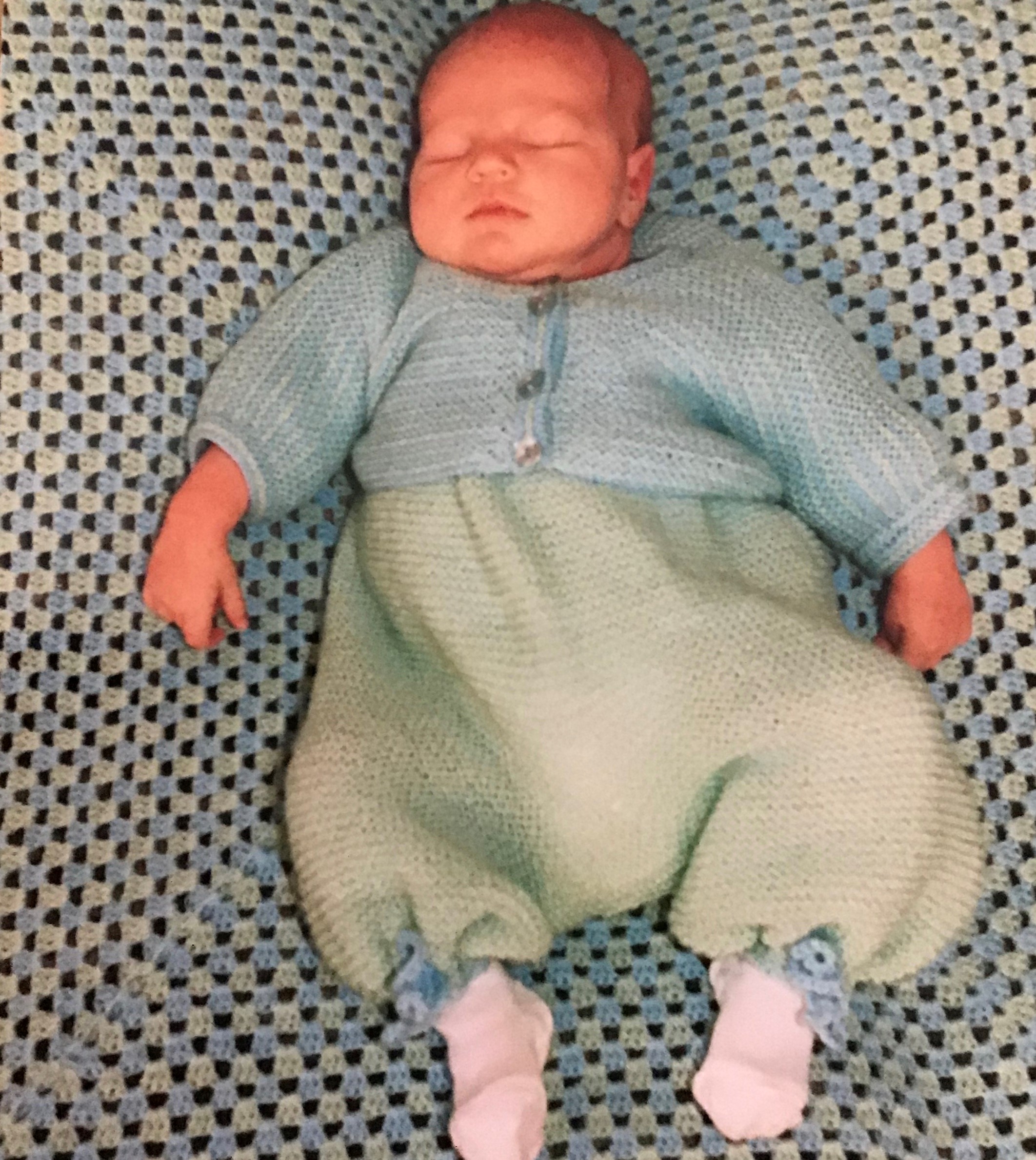 Anyway, back to Dan. He weighed in at an eye-watering 9lb 1oz and was 22 inches long, so was always destined to be tall. In the second picture where he was a few days old, he is wearing an outfit that I knitted for him and lying on a blanket that I’d crocheted. I did it in predominantly green as Chris and I hadn’t wanted to know the sex of our baby from the scans and we thought that was the most unisex colour. I seem to remember being pretty convinced that I was having a girl, despite everyone telling me that ‘my bump’ looked more like a boy; all at the front, I didn’t even look pregnant from the back. 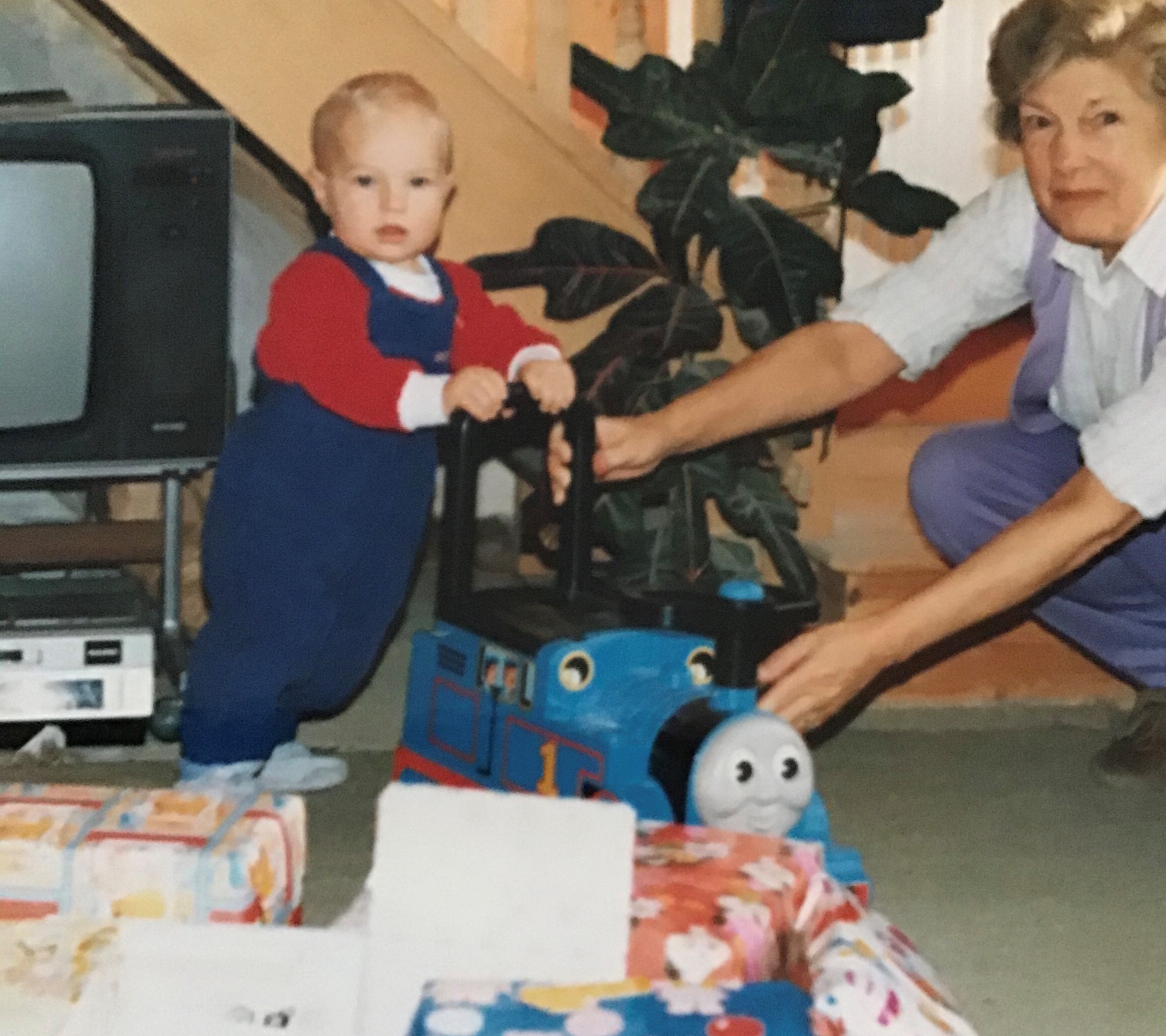 Picture three, taken on his first birthday is with my mum, who I often mention on air. She would have been sixty-one when this photo was taken, but she certainly doesn’t look it and was extremely agile as she used to be a dance teacher; to be honest, she’s still incredibly agile and upright at the grand old age of ninety-four and always willing to try something new. We had a second FaceTime call this week and she really enjoyed being able to see as well as hear us. 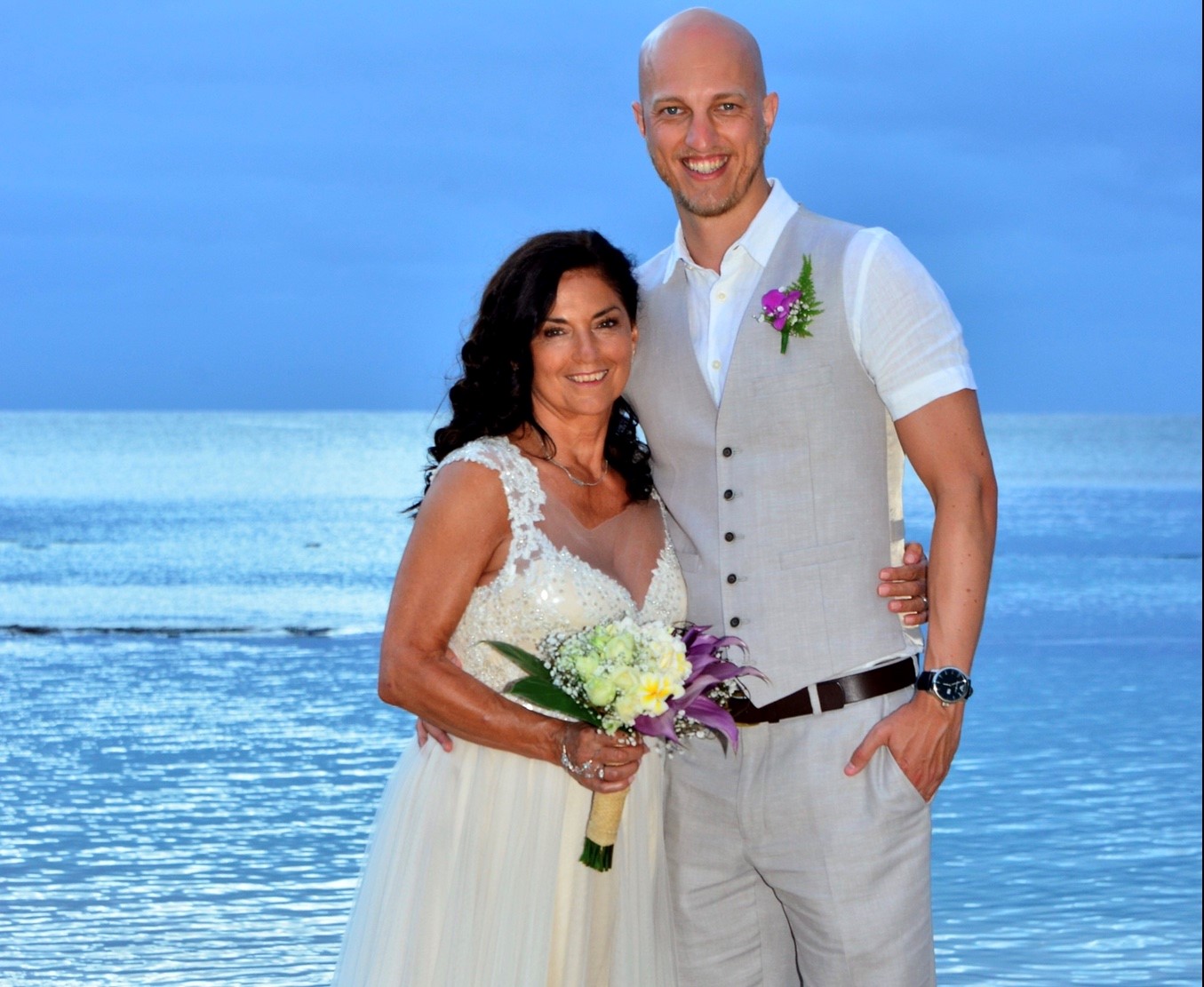 There have been hundreds, if not thousands of wonderful moments with Dan captured on camera (or these days, more likely phone) over the years, but our wedding photos where Dan was not only our ‘best man’ but also gave me away have to be right up there with the best. As he took my arm before walking me down to the beach pavilion where Chris and I were married, he whispered, ‘Your dad would have been very proud of you.’ I don’t know about Dad being proud of me, but I do know I’m very proud of the kind, caring, thoughtful person he has become.

Like a lot of people, his birthday this year has fallen in lockdown, so it’s going to be a bit different, but his girlfriend, Katie, was determined that it should still be his special day and came up with the idea of a ‘theme’ of a place they both really like, but have yet to visit together. I won’t say too much, but I’ll post a couple of photos next week and these coffee-flavoured cup cakes might give you a clue! 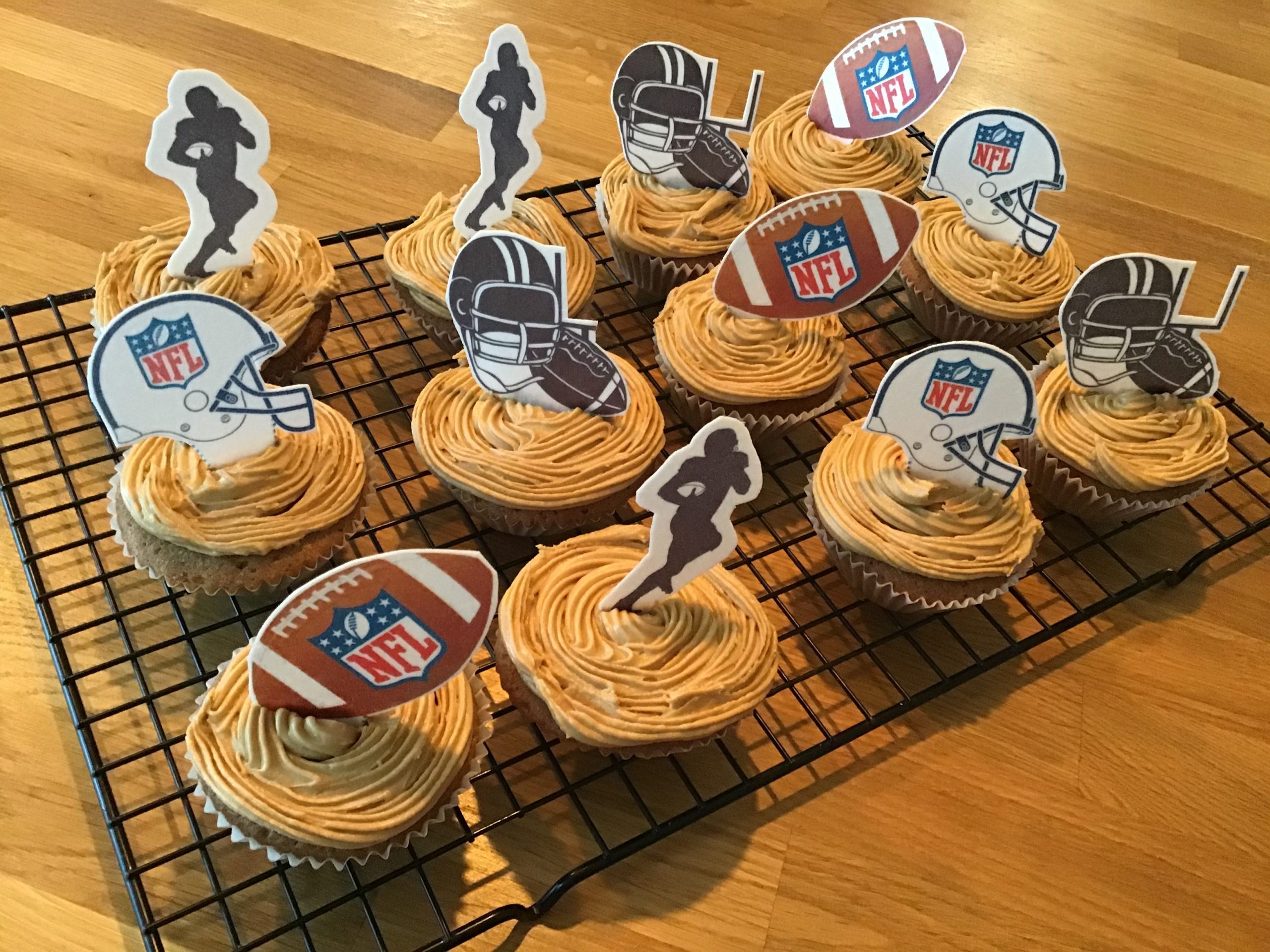 Funnily enough, our football team, Crystal Palace, are the featured game on TV tonight, which I’m not sure is a good thing following their dismal performance on Monday night against the team that were bottom of the Premier League – let’s hope they do better tonight. 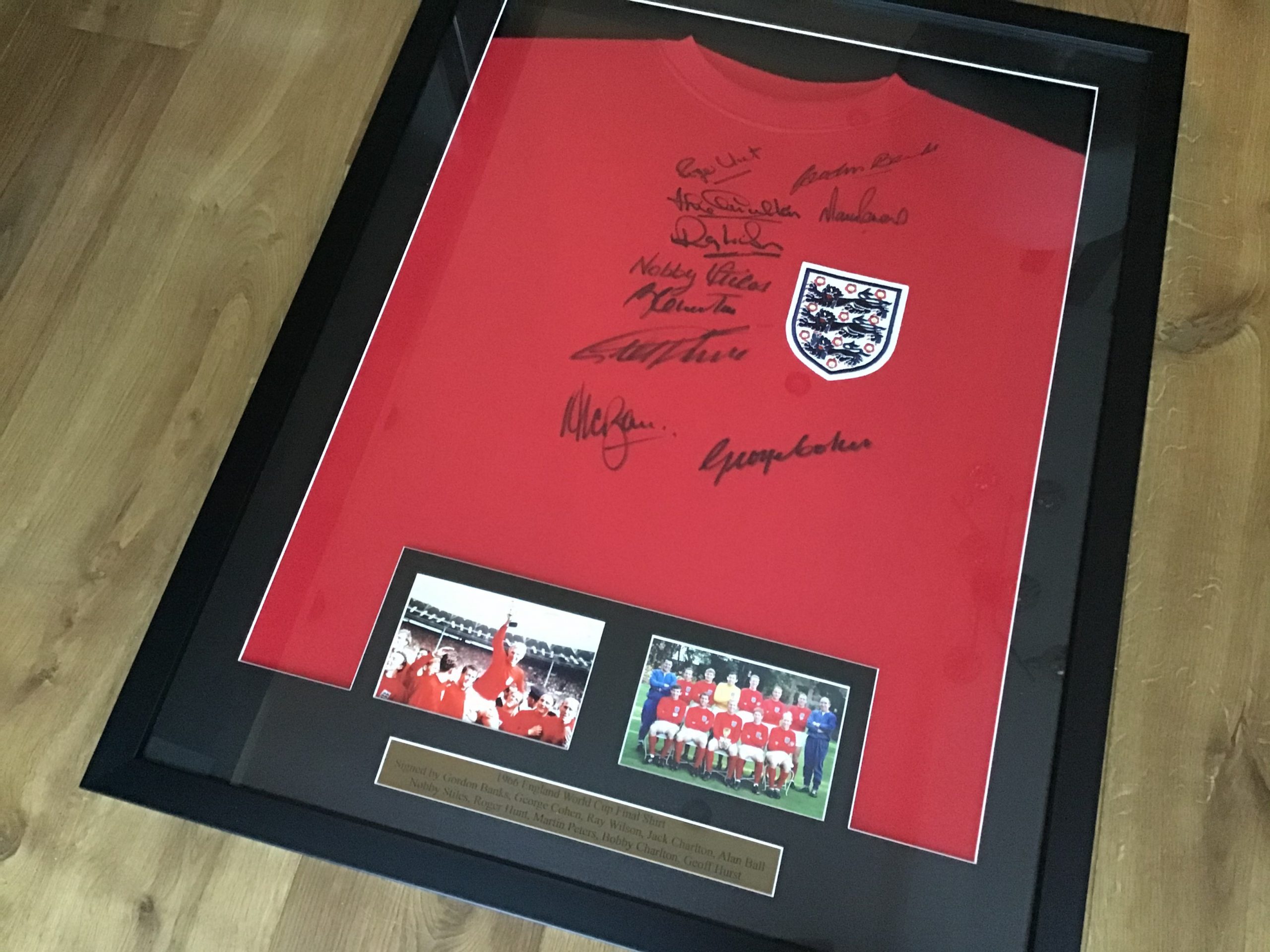 And talking of football, Dan finally got around to having his signed England shirt framed. I bought it for him from QVC probably over twenty-five years ago, so it has taken a while! It has all the signatures of the 1966 World Cup winning squad with the exception of captain Bobby Moore who sadly had already passed away when the shirt was signed by the former players. I’m not going to lie, I didn’t realise the frame was going to be quite so big, but it will be perfect on the wall of his ‘man cave’ (or should that be Dan cave) when he and Katie eventually have their own home. 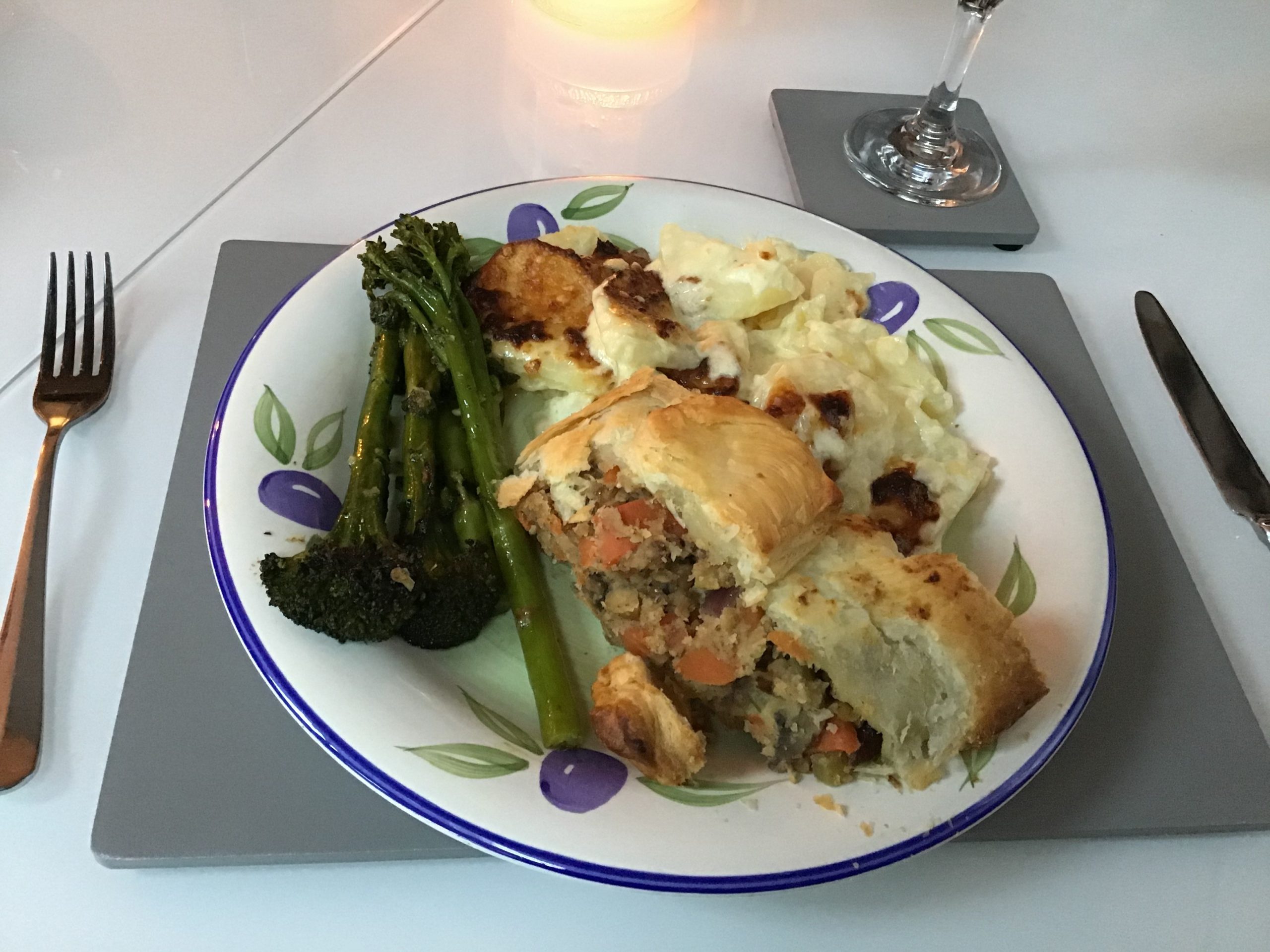 Speaking of Katie, she had cooked a delicious Sunday lunch of Nut Roast Wellington, Dauphinoise Potatoes and Tender-Stem Broccoli when I arrived home from work after an amazing Liz Earle show with the lovely Caroline Archer. So not only is Katie kind and thoughtful in all the effort she has put in to organising things for his birthday, she’s also a great cook! She is doing his birthday cake, so I’ll pop a picture on here next week… we keep telling her to apply for The Great British Bake Off – happy with this year’s winner, he deserved it overall, I think. 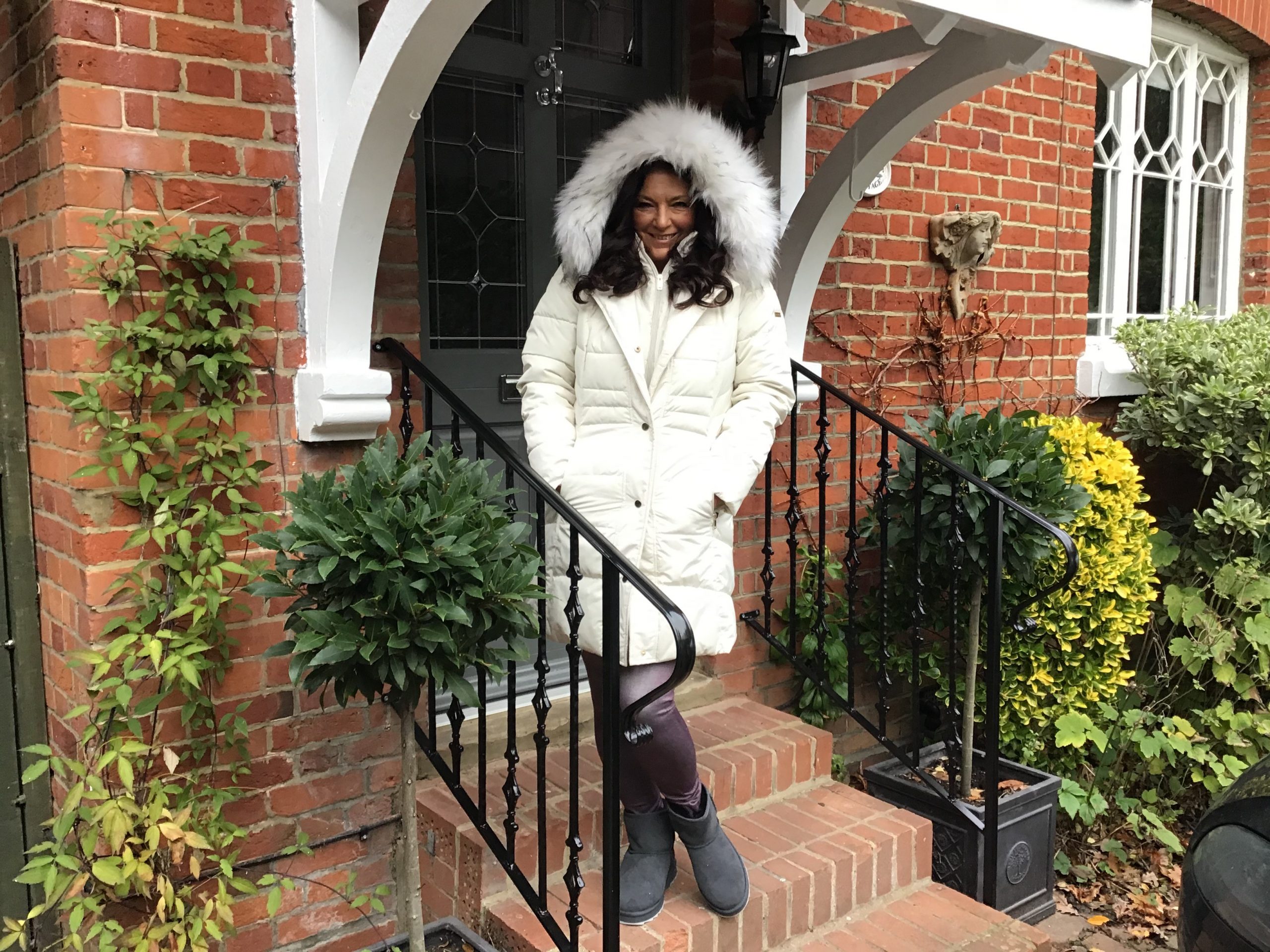 So, on last week’s blog I showed you the photo of Wilfie ‘wearing’ the Centigrade Today’s Special Value coat, which launches on air tonight at 9 p.m. Here’s me wearing it (it fits me better) with both the hood up and the hood down. This is the Bone colour which I absolutely love, but it also comes in Navy, Black, Dusty Pink and Loden Green – check out our stylist Stine’s blog if you want to see lots of us presenters wearing it in various locations, and I’d recommend ordering early, as not only would this be a great self-purchase but also a stylish and useful Christmas Gift. 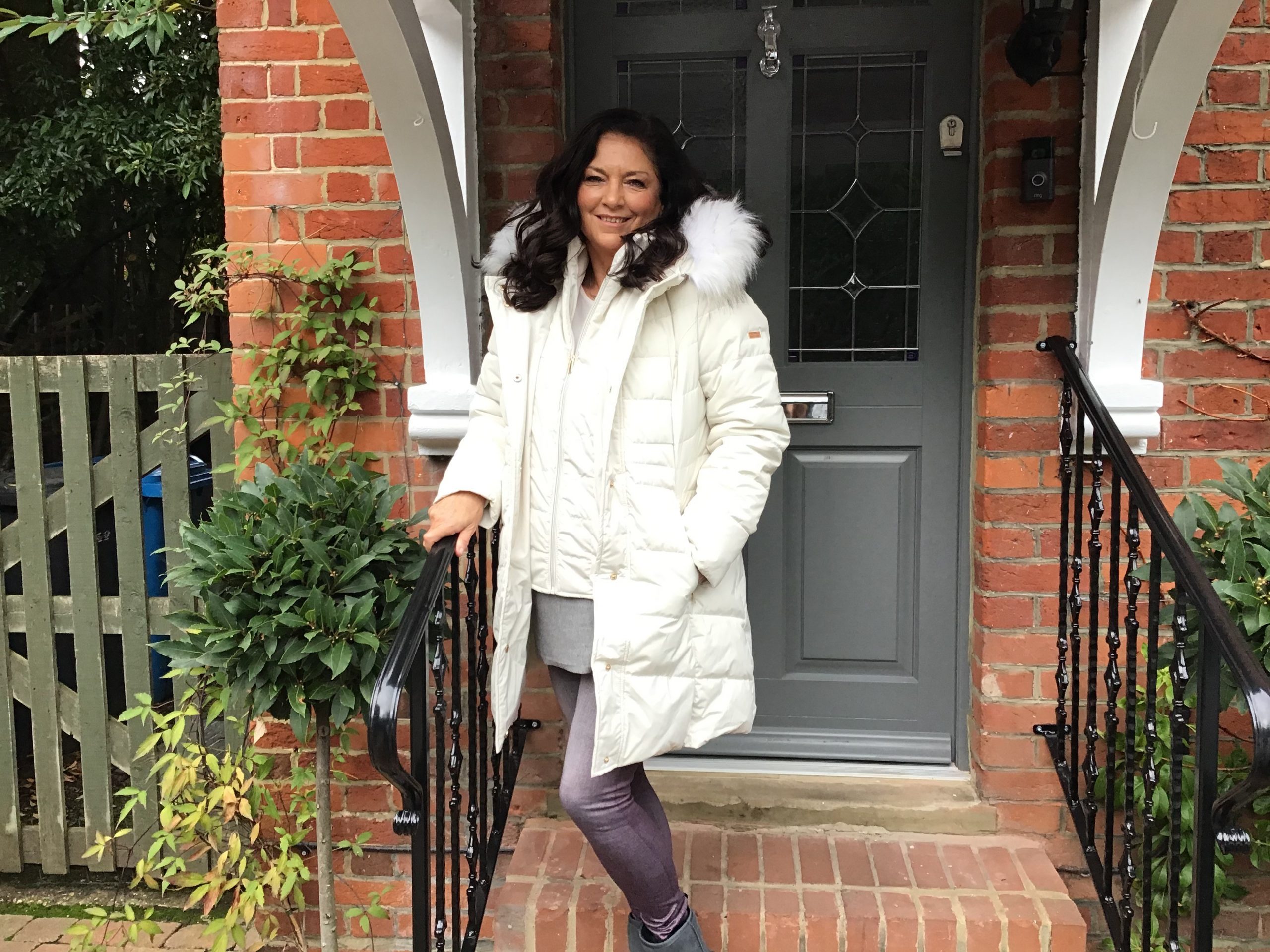 The coat will be the second of our three Black Friday Event Today’s Special Values. The first is from Korres, which I’m on with this afternoon at 3 p.m. and then Sunday’s is a 6-piece Age Benefit Collection from Gatineau. There is a code to use at checkout on our website for the duration of the event if you want 3 Easy Pay interest-free instalments… ALL3EZ – there are a few exceptions, so check our website for full details. And watch out for a new code to use on Cyber Monday to get 15% off selected brands when you spend £50 or more.