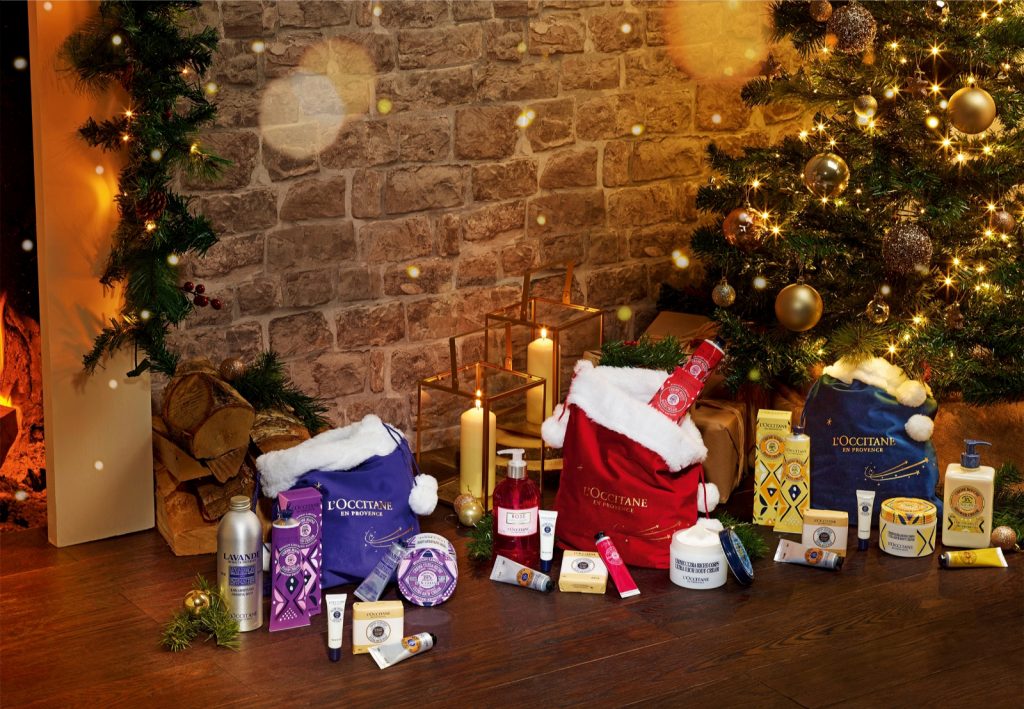 This is generally the time of year for wrapping things up, not that I’ve started yet, but this weekend is an event called ‘QVC Unwrapped’, where you will be invited to find out what goes on behind the scenes in order to bring you what you see on television and also on our website and other social media platforms. It’s kind of like having a VIP backstage pass at a gig so that you can access all areas. There will be cameras where there are not usually cameras, like in our prep kitchen and the guest and presenter areas. I’ve just had a thought… I hope Katy Pullinger has been keeping our dressing room tidy while I’ve been off sick! That aside, here is Will Gowing to tell you more about what you can expect…

Along with all the behind-the-scenes footage, we also have two amazing Today’s Special Value offerings on air to tempt you with, particularly if you are in full Christmas gift-buying mode. 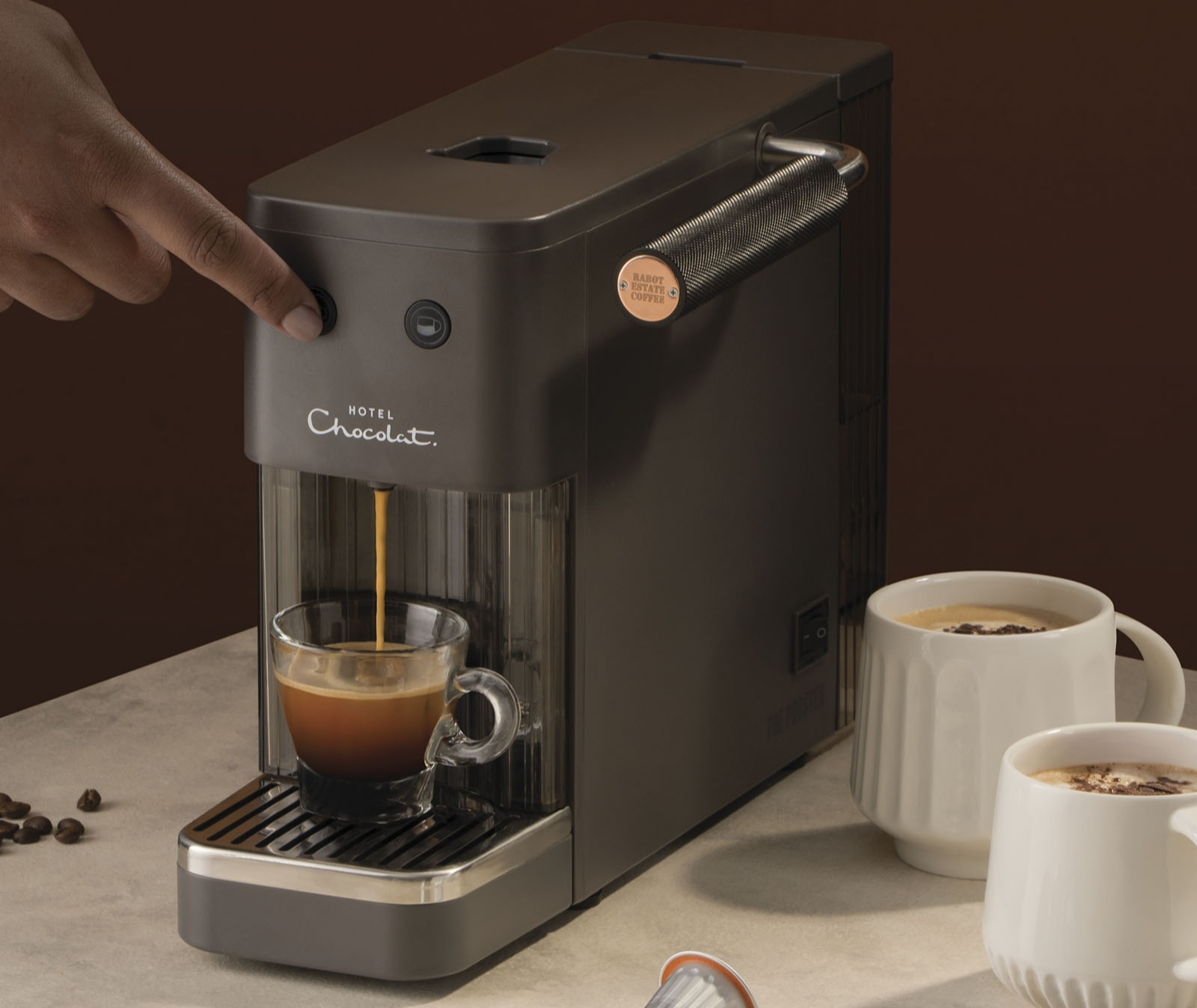 The first is from Hotel Chocolat, but is nothing to do with chocolate. We’re delighted to have the world launch of the Hotel Chocolat Podster Coffee Machine, which comes with 20 capsules to get you started but is also compatible with Nespresso and other standard size pods. It’s made by Dualit who make the Velvetiser. I have to say I’m very impressed with the quality of manufacture, which I’m familiar with, as we bought a Dualit kettle earlier in the year and I can honestly say that so far, it’s the best kettle we’ve owned. I also love the fact that it comes with a Podcycler, which makes recycling the pods really easy – you can even use the coffee grounds to enrich the soil in your garden. It’s already available to purchase on pre-launch and is on 3 interest-free Easy Pay instalments. 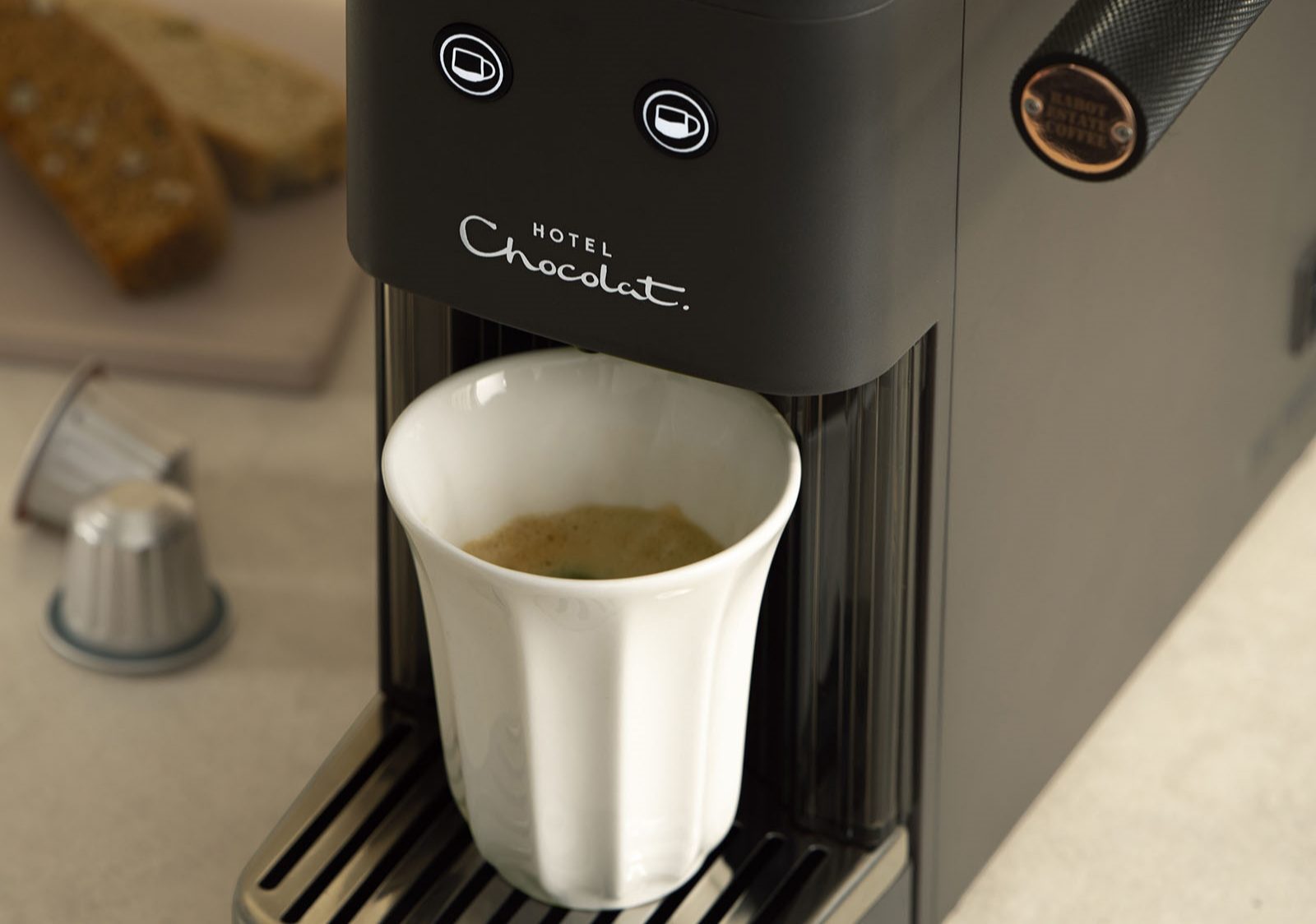 But if coffee is not your thing and you prefer beauty, Sunday’s Today’s Special Value from L’Occitane could be right up your street! I say Sunday’s TSV, but of course, it launches on air at 9pm on Saturday and once again is already on pre-launch. 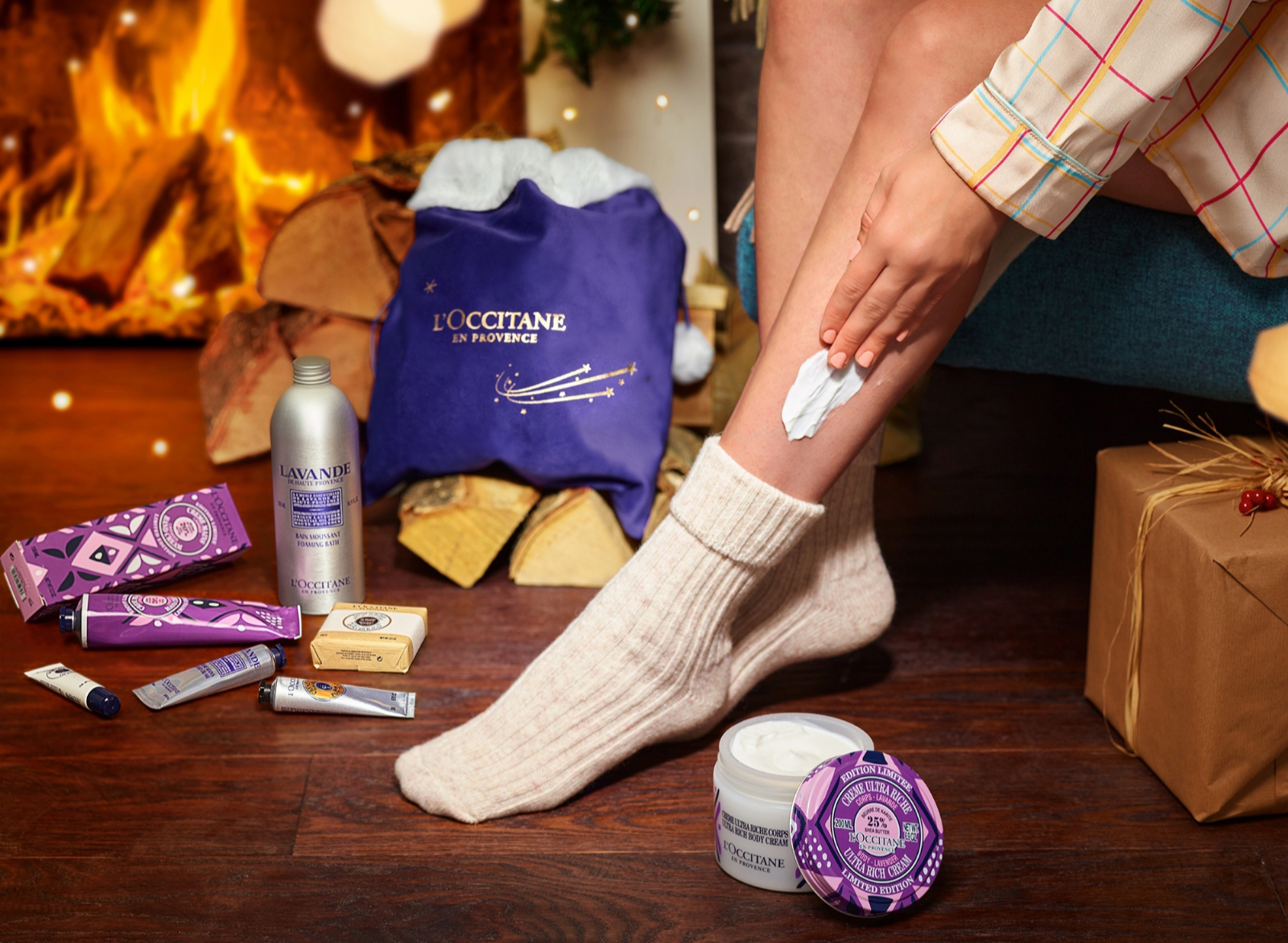 There are three fragrance options to choose from:

Each option is a 7-piece collection and comes with a drawstring bag decorated with pom-poms, so perfect for gifting, or ‘sifting and gifting’ if you want it to be more than one present. And, did I mention that it is on 5 Easy Pay interest-free instalments if you want to spread the cost? It’s a win win!

So, many of you will be sat in front of your TVs this weekend enjoying QVC Unwrapped, but my husband has other plans… let me explain. 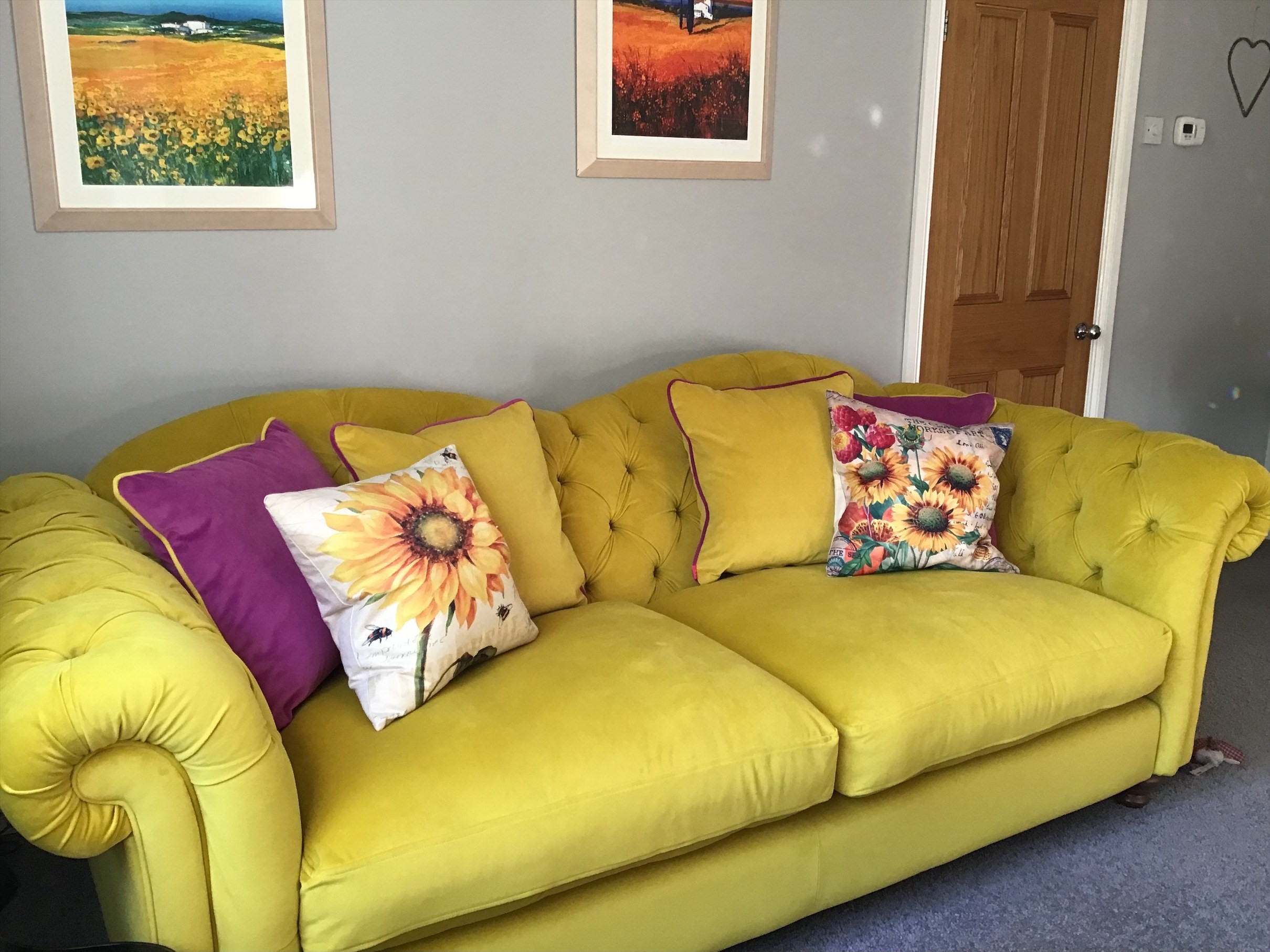 Last weekend, Dan, Katie and Quin came to visit and to see the velvet cushions for our new sofas, which had arrived a couple of days previously. Can I just say that the wait was worth it – our comfy new sofas are now even comfier. Anyway, whilst sitting watching ‘Strictly’ (how amazing was Rose btw), Dan commented that they both really liked our shelves and would Chris be up for making some for them. 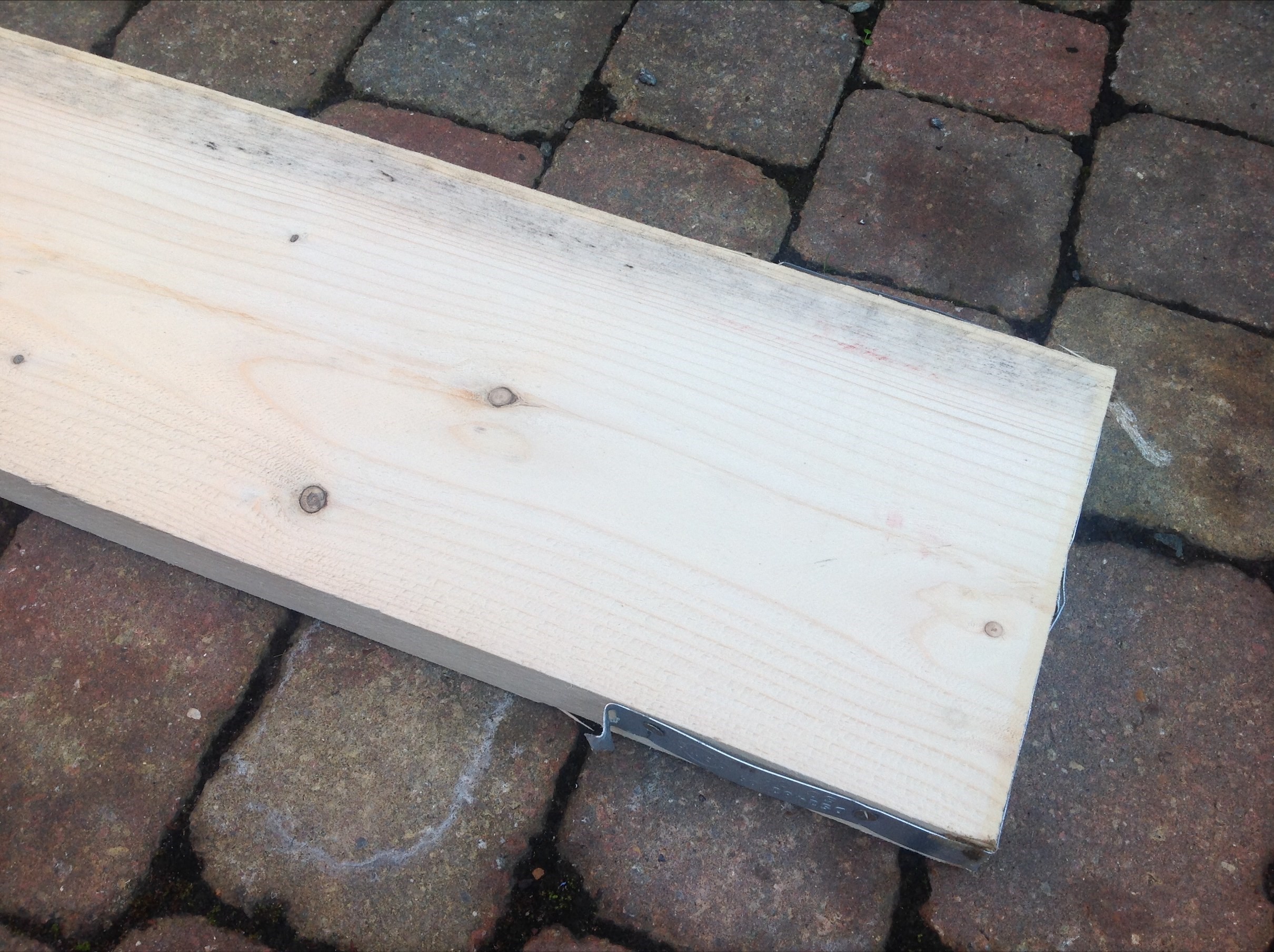 So, yes, that is a photograph of a scaffolding plank lying on our drive, which Chris will transform into two varnished shelves just like the ones in the photo below – the brackets are due to arrive tomorrow so that really is his weekend taken care of. Maybe he could turn it into a business – don’t get any ideas, I’m joking. 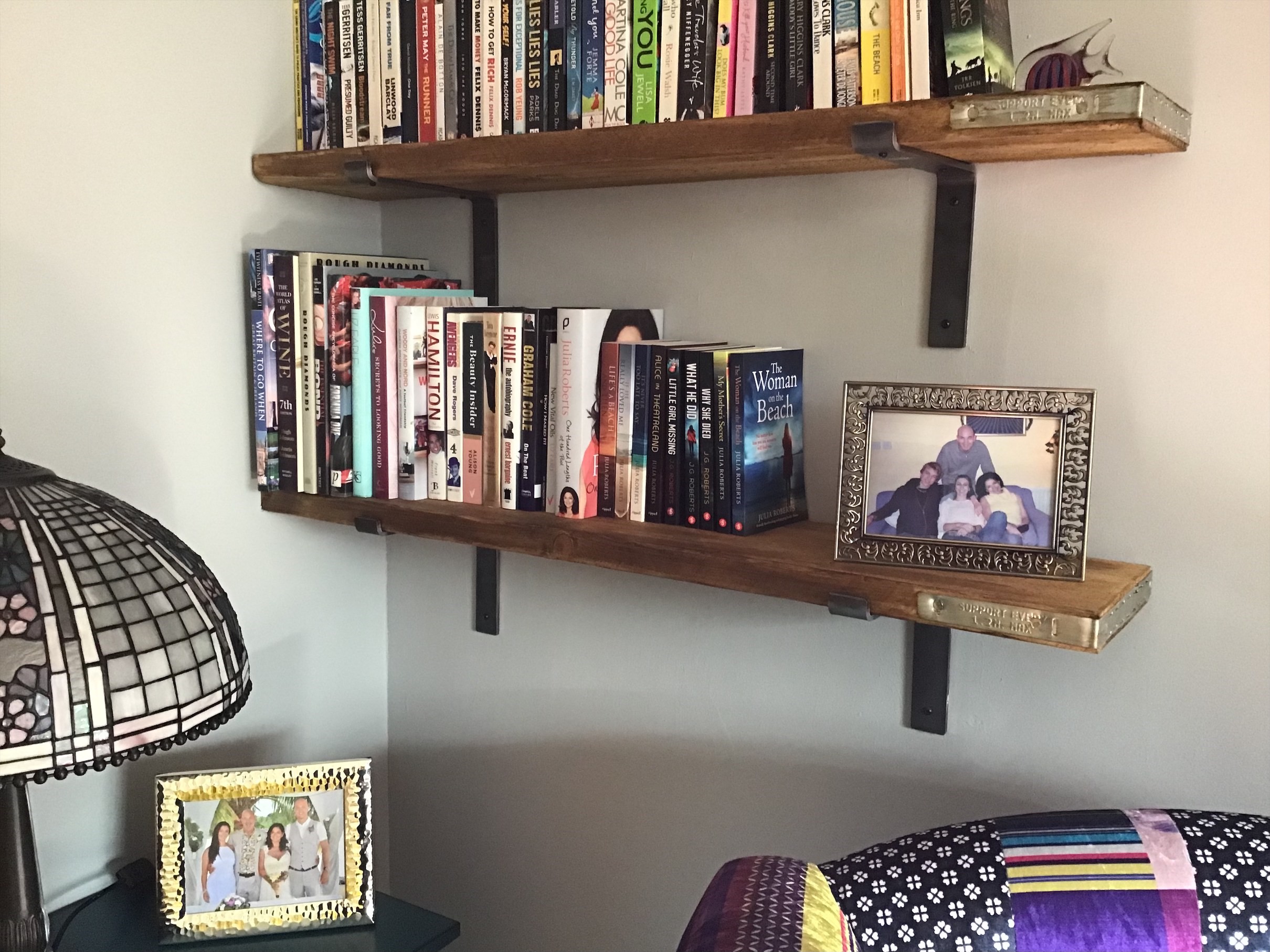 When I was taking the photo of the shelves, I noticed what an eclectic mix of books I had on display. The really funny thing is that the bottom shelf comprises almost entirely of books I’ve written or that are written by people I know! Some are by ‘QVC people’ like Ali Young, Tova, Lulu, Liz Earle, Jemma Forte, Jackie Kabler and Simon Wilson and most are signed. 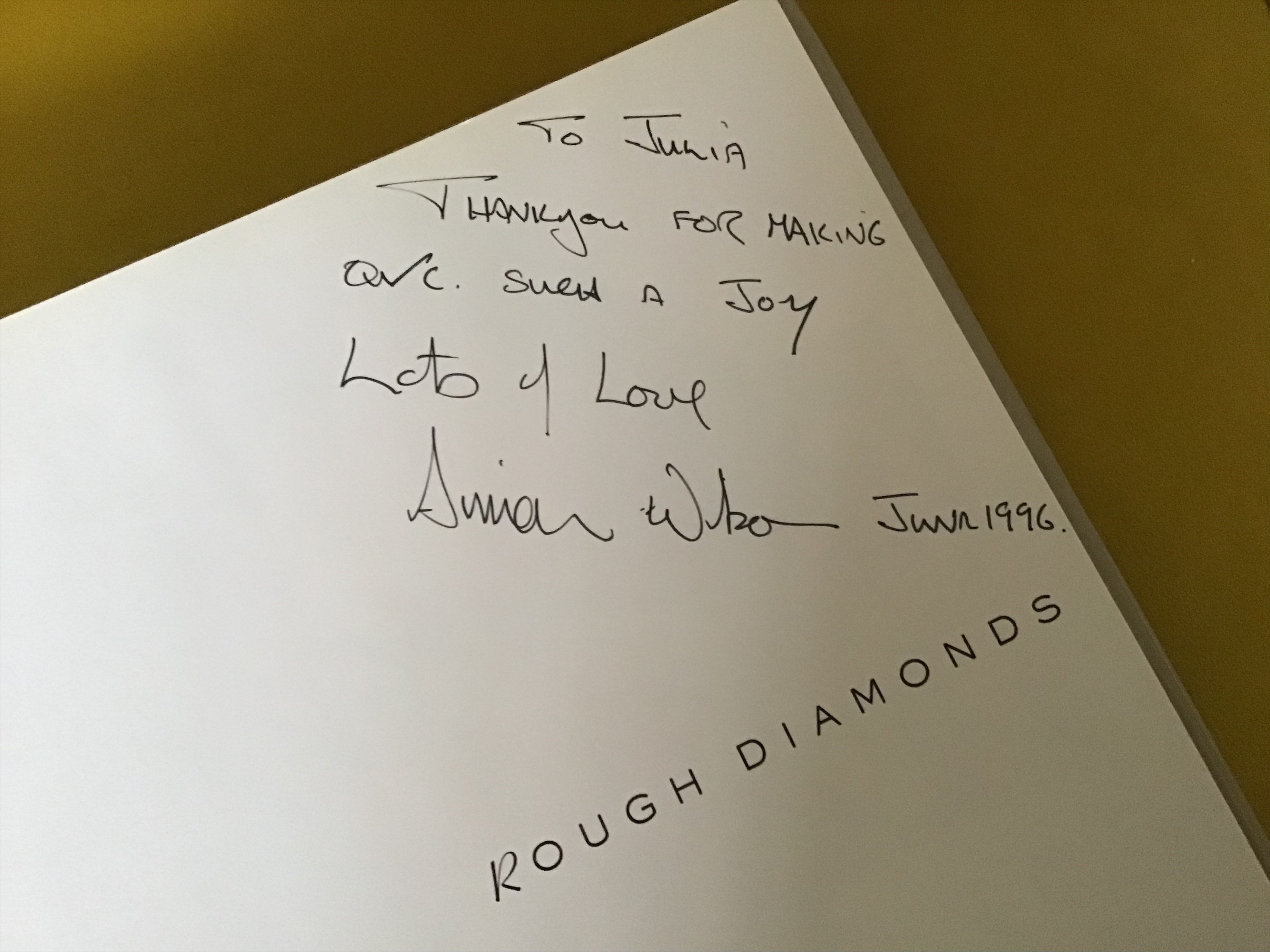 I can’t believe this message in the front of Simon’s Rough Diamonds book was from 1996! Where does the time go? Incidentally, I’m hoping to be doing Butler & Wilson as one of my first shows back – more on that in a minute! 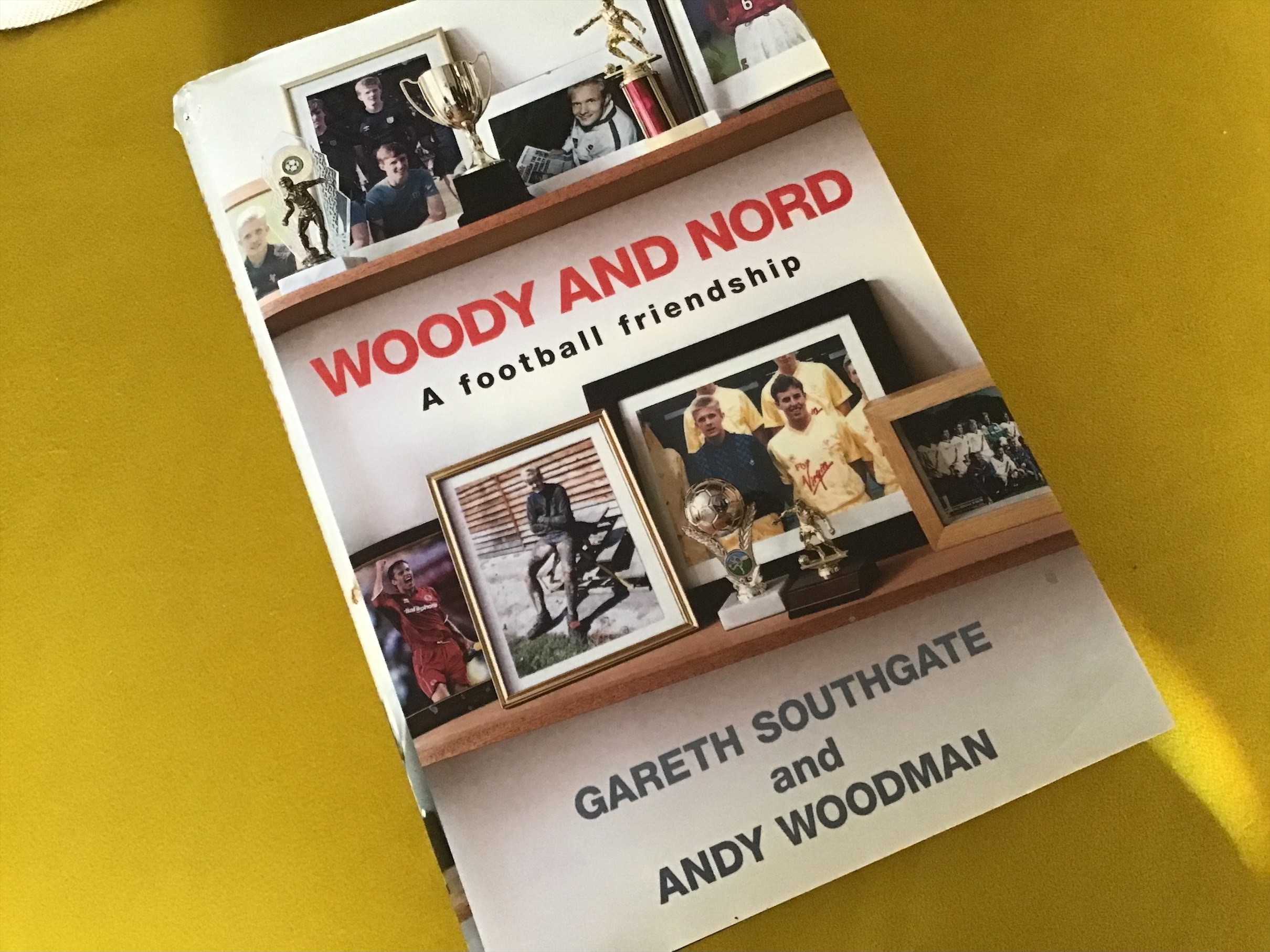 There are also a couple of books written by friends who are not connected to QVC. There is one called ‘On the Beat’, written by my friend Graham Cole who played Tony Stamp in The Bill, and there is also this book called ‘Woody and Nord, A Football Friendship’. It’s about two former Crystal Palace players, which is how I know them, Andy Woodman and the current England manager Gareth Southgate. Probably a good moment to mention that England deserved their two impressive victories to qualify for next year’s World Cup tournament. I was particularly pleased to see Conor Gallagher, a current Palace player make his debut… it doesn’t happen often!

Back to books for just a moment, my latest, ‘The Woman on the Beach’, was selected for a promotional deal on Wednesday which propelled it to number 17 in the UK Kindle chart, where I was rubbing shoulders with John Grisham and Richard Osman, to name but two. I’m so grateful for the success of this book, particularly as it has come at a time when I needed something positive to focus on with all the issues with my health. Speaking of which, I had an appointment with my neurosurgeon which was also on Wednesday as it happens, and he has given me the green light to return to work – Hooray! (I think Chris is probably thinking that too).

So, whilst I’m missing the QVC Unwrapped weekend, which I would dearly love to have been part of, I should be back on your screens for Fashion on Friday next week.

Just before I finish, I would once again like to thank you for all your lovely messages – I will reply to them all, I promise. 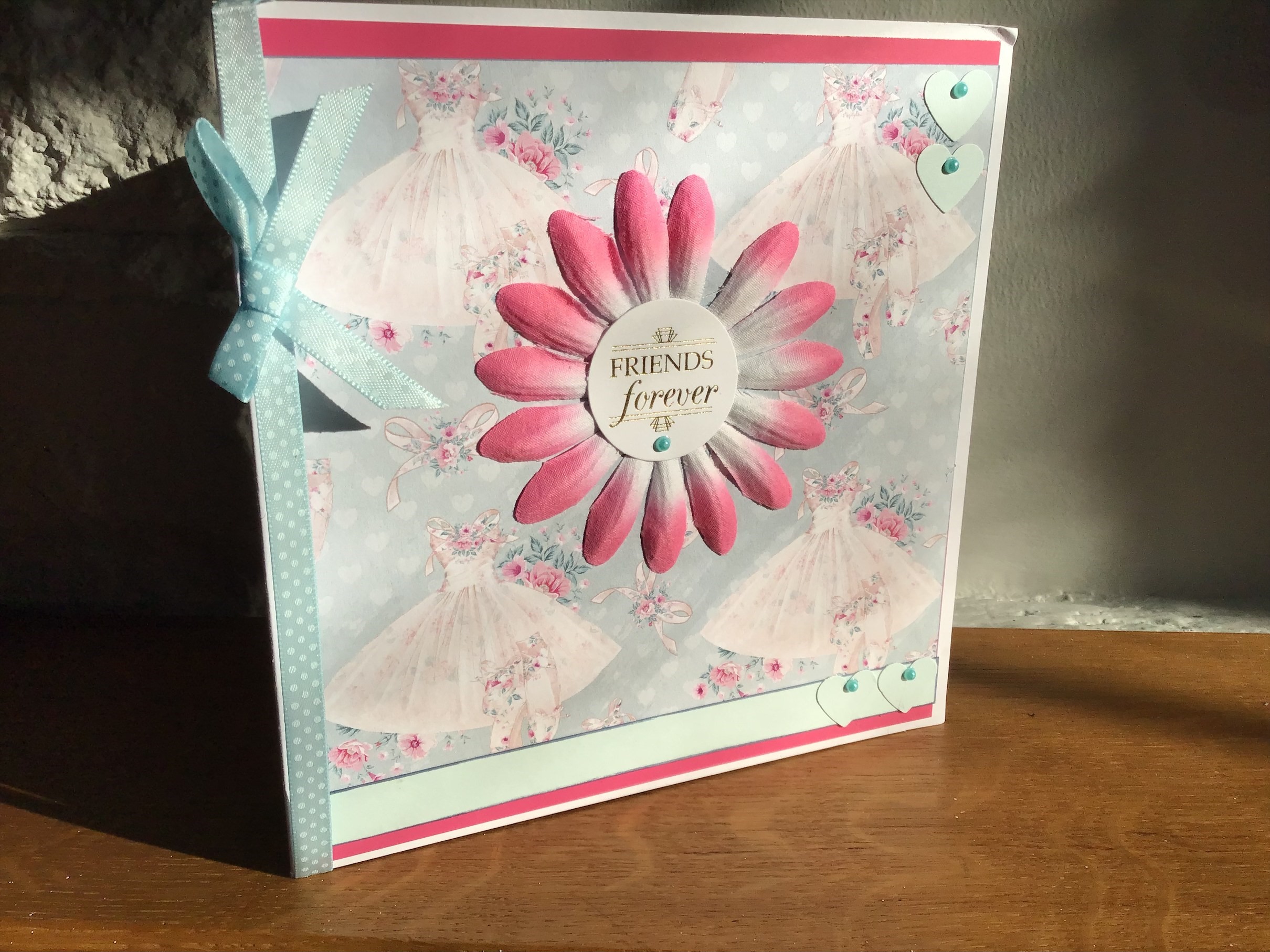 I also want to thank Diane, an avid QVC viewer and a friend of mine since we were dancers together in a theatre show in Barcelona in 1976, for making me this card. In it she says, ‘I hope you are recovering at a pace that is right for you.’ To be honest, I’m normally a hundred miles an hour person, which is why Diane wrote that to remind me to slow down.

So, I’ll see you all in the latter part of next week and hoping to restart Permission to Pry on Instagram soon too.