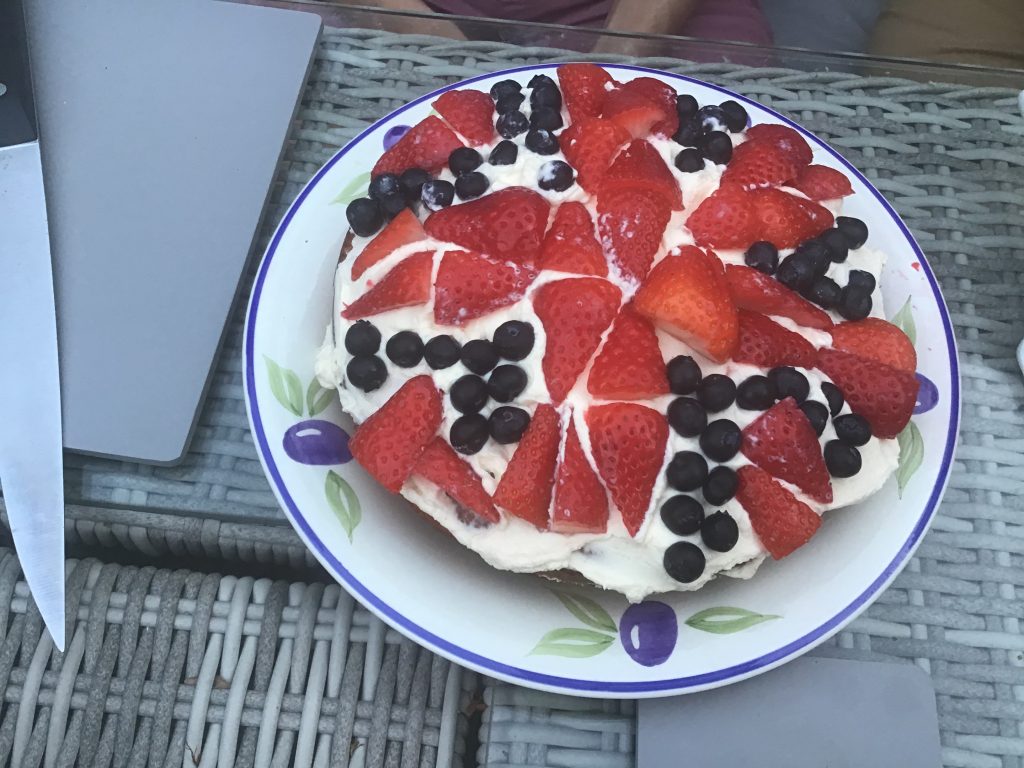 You’re probably wondering what the title of this week’s blog means – all will be revealed later, but if you love quizzes, keep on reading. First though, is it really only a week since VE Day? This week seems to have flown by in a haze of working at QVC, writing, daily physio and baking, the last of which Dan’s girlfriend, Katie and I have done a lot of this past week.

We were both busy last Friday morning creating VE Day goodies. I made a broccoli, cheddar and walnut quiche, coconut tarts, apricot jam tarts and some more scones, and Katie made the delicious Victoria sandwich cake, pictured above, decorated with cream and fresh fruit to represent the Union Jack flag. It’s a good job there are four of us to share the eating of these creations and that three of the four of us are regulars in the gym! 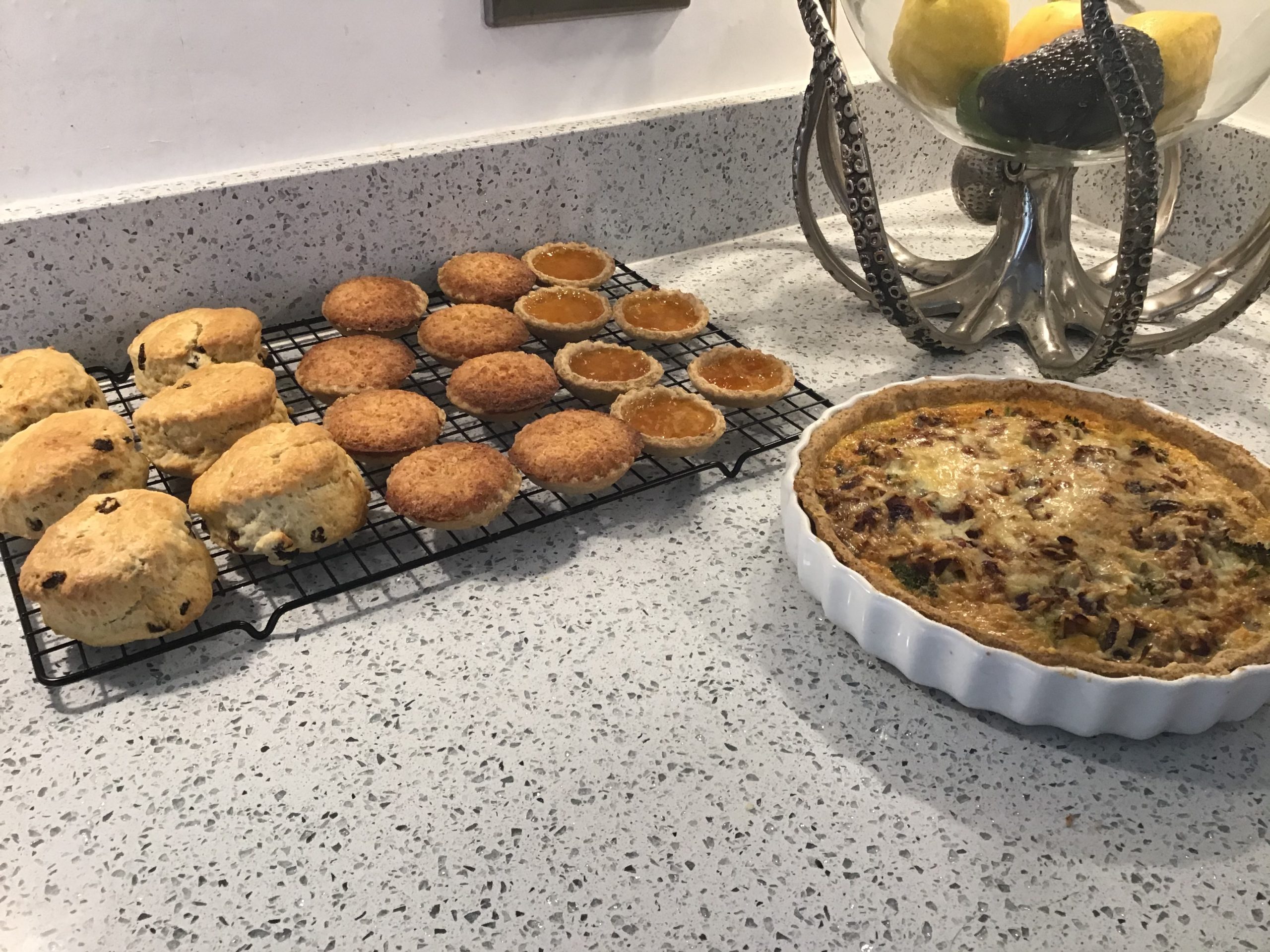 Chris also popped round to leave our elderly neighbours some scones and tarts to have with their morning coffee – we didn’t share the cake though! That batch of baking has cleaned us out of the self-raising flour that Alex Kramer kindly gave me, and we can’t get any more in our local supermarket at the moment, so we’ve turned to recipes that use plain flour instead. Katie made these delicious shortbread biscuits – I didn’t even know I had that heart-shaped cutter! 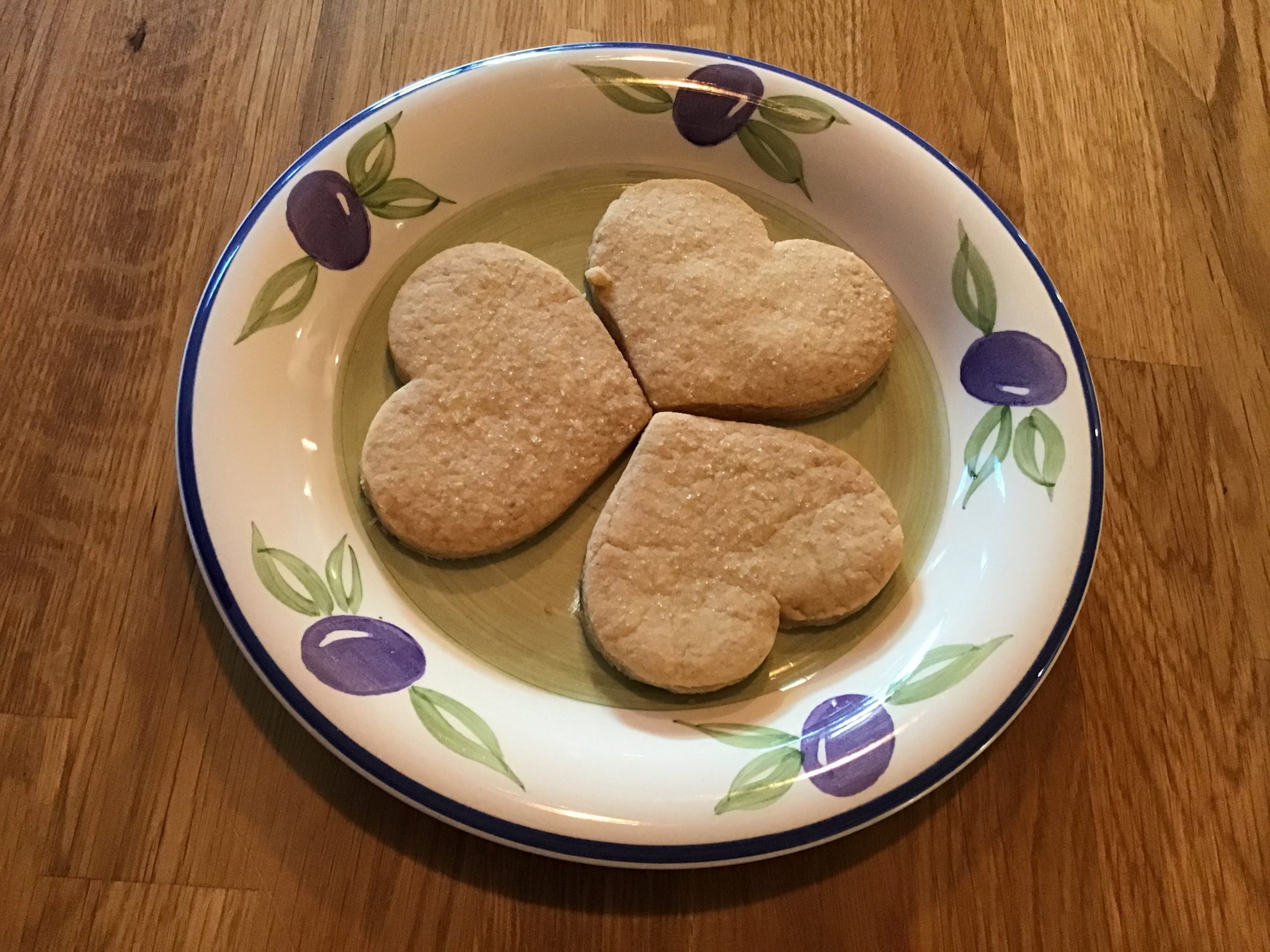 I wonder if any of you tried my scone recipe from last week’s blog? They can actually be made using plain flour, you would just add another teaspoon of baking powder.

Amid all the baking last Friday morning, I suggested to Dan and Katie that they made some bunting. In my mind, I was thinking of simple triangles coloured in red or blue and leaving the third one white, but the two of them got very creative as you can see from this video.

We all stopped what we were doing at 11 a.m. and I have to admit I got very teary-eyed. My dad, who we lost almost thirteen years ago, would have been one hundred years old next month if he had lived. He served as a ground crew engineer in the RAF, keeping the planes in the air. This picture of him so reminds me of my son, Dan, particularly around the eyes and the mouth. 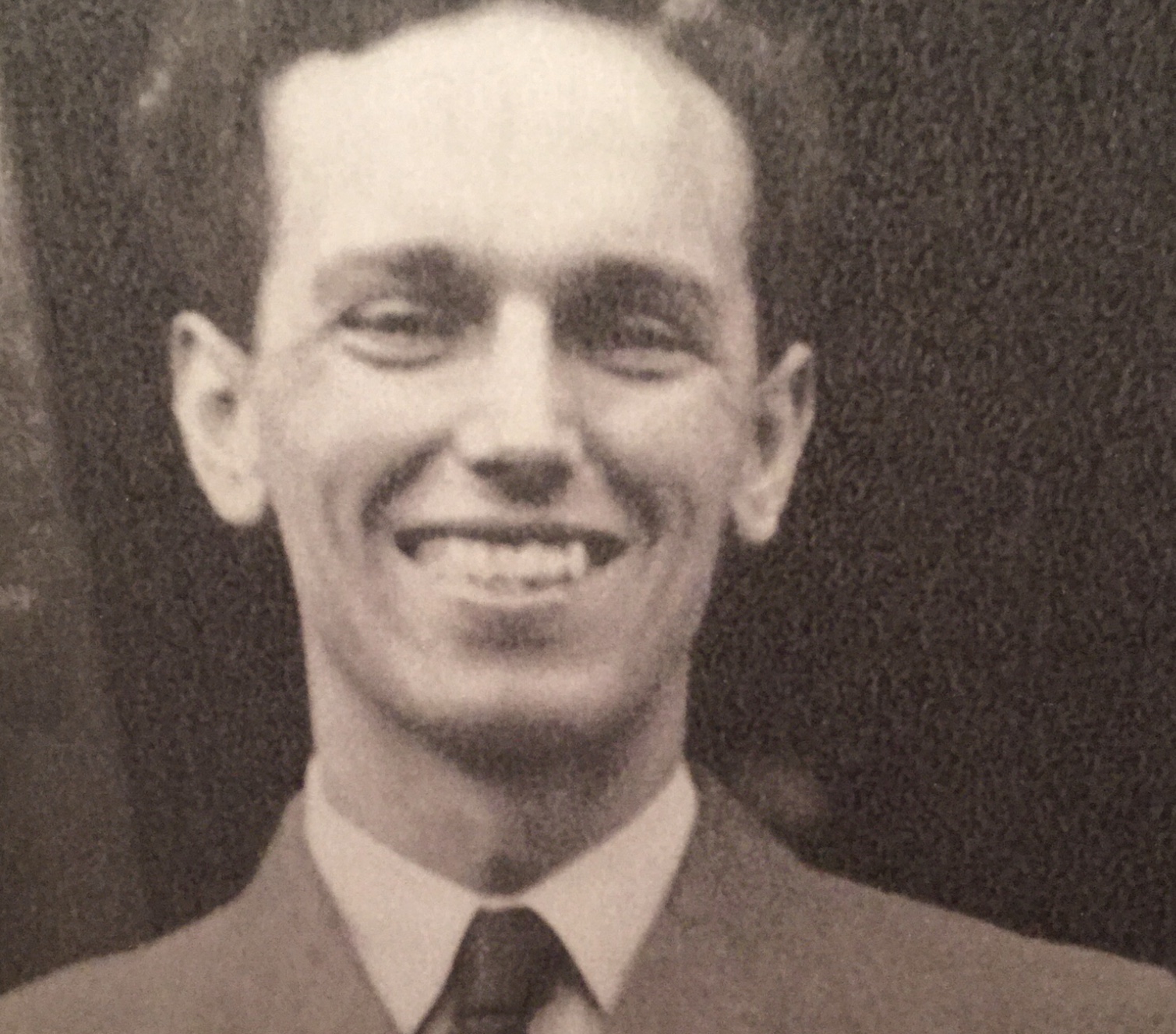 Last Friday was also the first of my Facebook Live short story readings on my @JuliaRobertsTV Facebook page, which I will be doing for the foreseeable future. Thanks so much if you joined me live for ‘A Recipe for Love’ but if you missed it, the video is still available to watch. I’m doing it again tonight at 8 p.m., with another of my self-penned short stories entitled ‘The Shadow of Her Smile’, which has a slightly spooky edge to it, as it is Halloween themed. They are the only two short stories I’ve written, so I’ll either have to get scribbling for next week or do an excerpt from something longer. 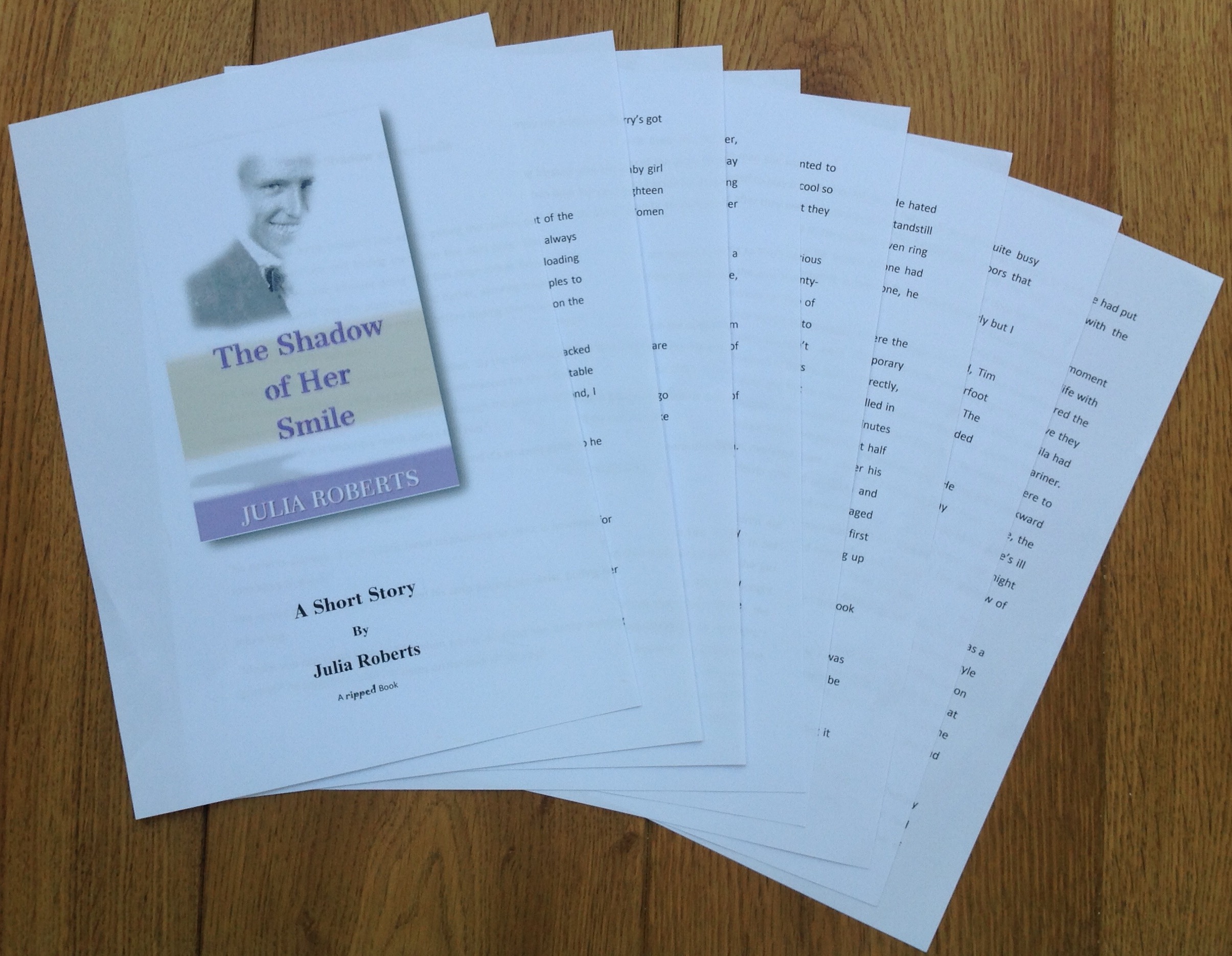 So, while I’m talking about live events on my Facebook page, I’m excited to tell you that from this coming Monday, the iQVC quiz will be up and running. I’ve mentioned several times on here the quiz we do as a family on Thursday evenings and funnily enough, it got a mention on last night’s News at Ten for achieving the Guinness World Record for most people participating in an online quiz – well done Jay! We’ve really enjoyed quizzing and it gave me the idea of doing a QVC themed one. I came up with the name iQVC because the first two letters are IQ, so testing your QVC knowledge, but I also thought it might be helpful for some newer customers to learn a bit more about us through the answers. The quiz will comprise of five rounds each of ten questions, four of which will relate to QVC people, brands and products, including a picture round, and then concluding with a general knowledge round. If you like the sound of it, join me at 8 p.m. this coming Monday (May 18th) – just for fun!

Movie night this week was my choice and I was torn between Les Miserables and The Truman Show. In the end The Truman Show won, but only because Katie hadn’t seen it. The scene where Marlon is sat with Truman on the end of the bridge pretending to be his friend when in fact he is being fed lines via an earpiece is heart-breaking – I won’t say any more in case you haven’t seen it, and I’m not a fan of ‘spoilers’!

So Wilfie is still refusing to play ball (football, that is) but I thought you might find this amusing. 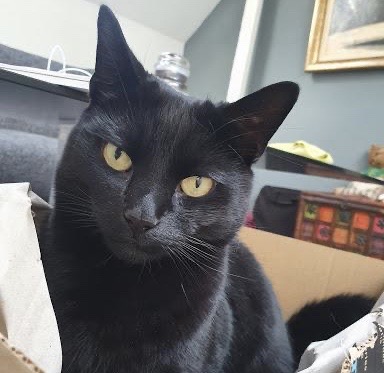 Most cats enjoy sitting in cardboard boxes, so Wilfie has been having a field day with all the deliveries we’ve been having to the house lately – most recently the Molton Brown Big Deal this week in Tobacco, which was the first option to sell out. However, does your cat enjoy biting the cardboard??? Don’t worry, Wilfie doesn’t actually eat it, he just bites and then tosses the cardboard pieces around himself like some kind of homemade confetti! 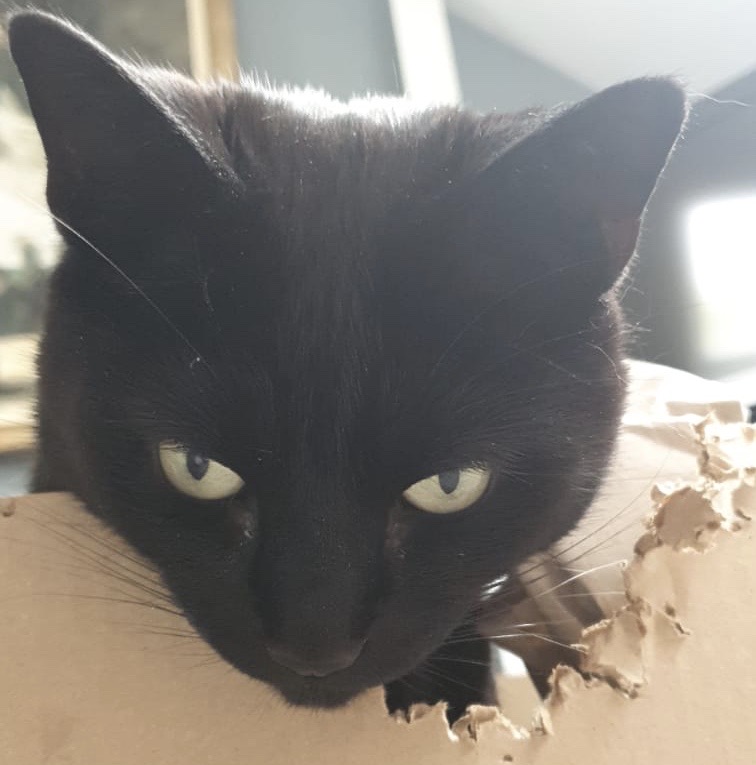 I’ll be heading into QVC shortly for a double helping of fashion today. There is the regular date with Fashion on Friday at 5 p.m. and then at 6 p.m., the first full hour of Sam Edelman footwear. It’s an American brand that has been going for over forty years and I can confirm that the trainer style I was wearing on air yesterday are not only stylish but really comfortable.

I’m then off for the weekend when I’ll be doing some more gardening, planting my QVC purchases. Here is the latest progress report on the ever-expanding tree fern and creeping into the picture are my lavatera, some forget-me-nots and some beautiful purple alliums. 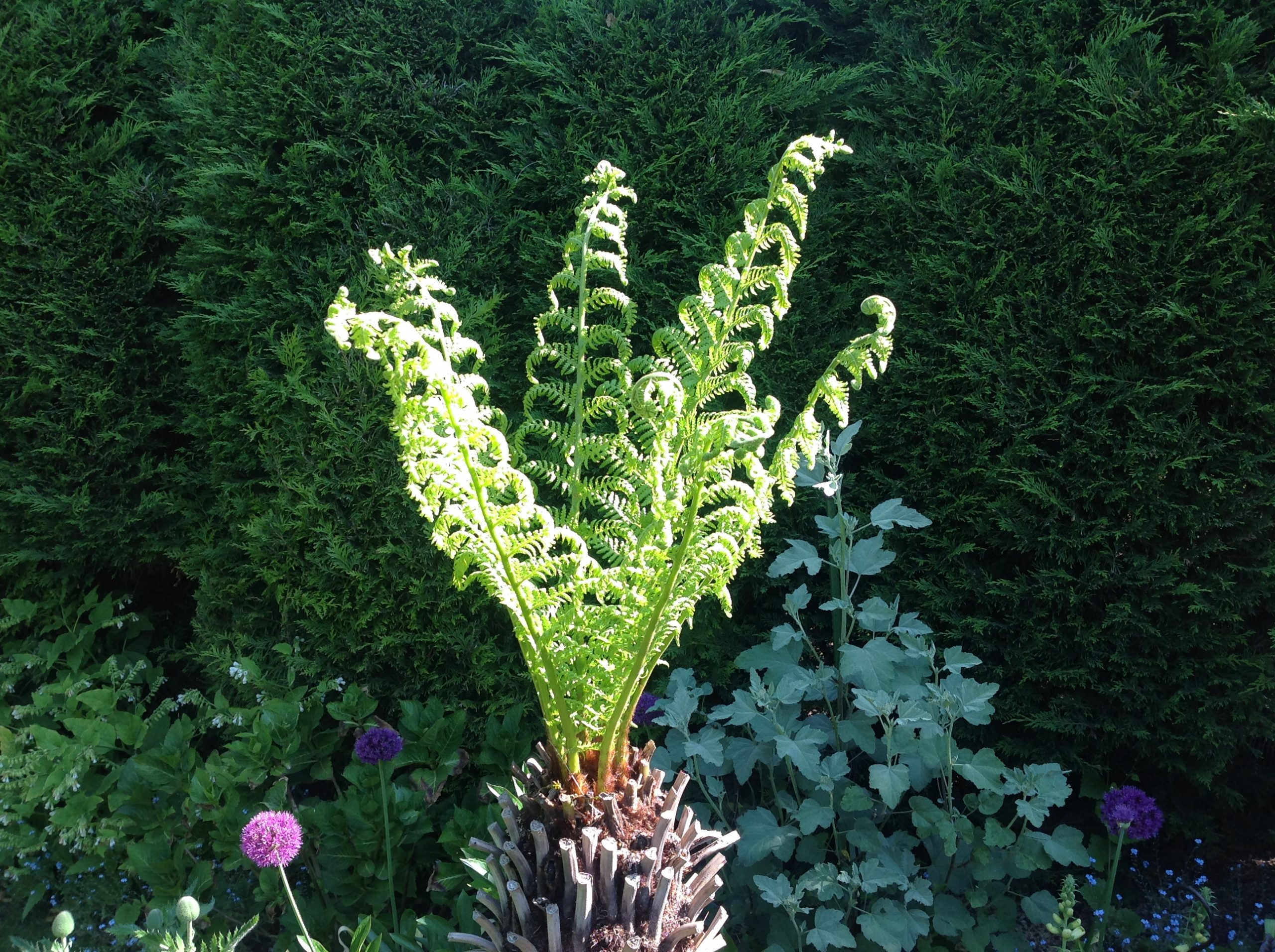 It’s the first time I’ve grown allium – these are from de Jager bulbs – but it certainly won’t be the last. Speaking of bulbs, I will update you on my Richard Jackson lilies next week.

So, although I’m not on air until next Thursday, you can catch up with me live on my @JuliaRobertsTV Facebook page prior to that for my story reading or the iQVC quiz, or preferably both.