As the bunnies say, happy Easter…. 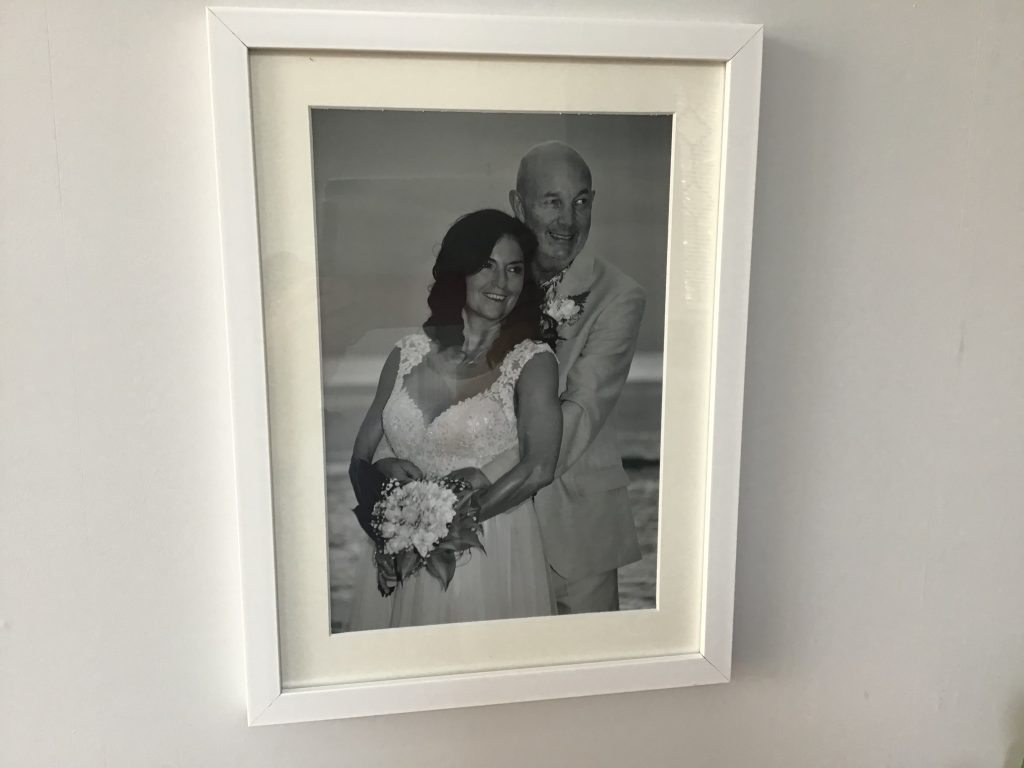 There’s no denying that it’s going to be a very different Easter for most of us this year in lots of ways, but particularly not being able to see our families in person unless we’re living with them. My lovely mum sent us a card and £20 to spend on Easter eggs, some of which you’ll see pictured below. 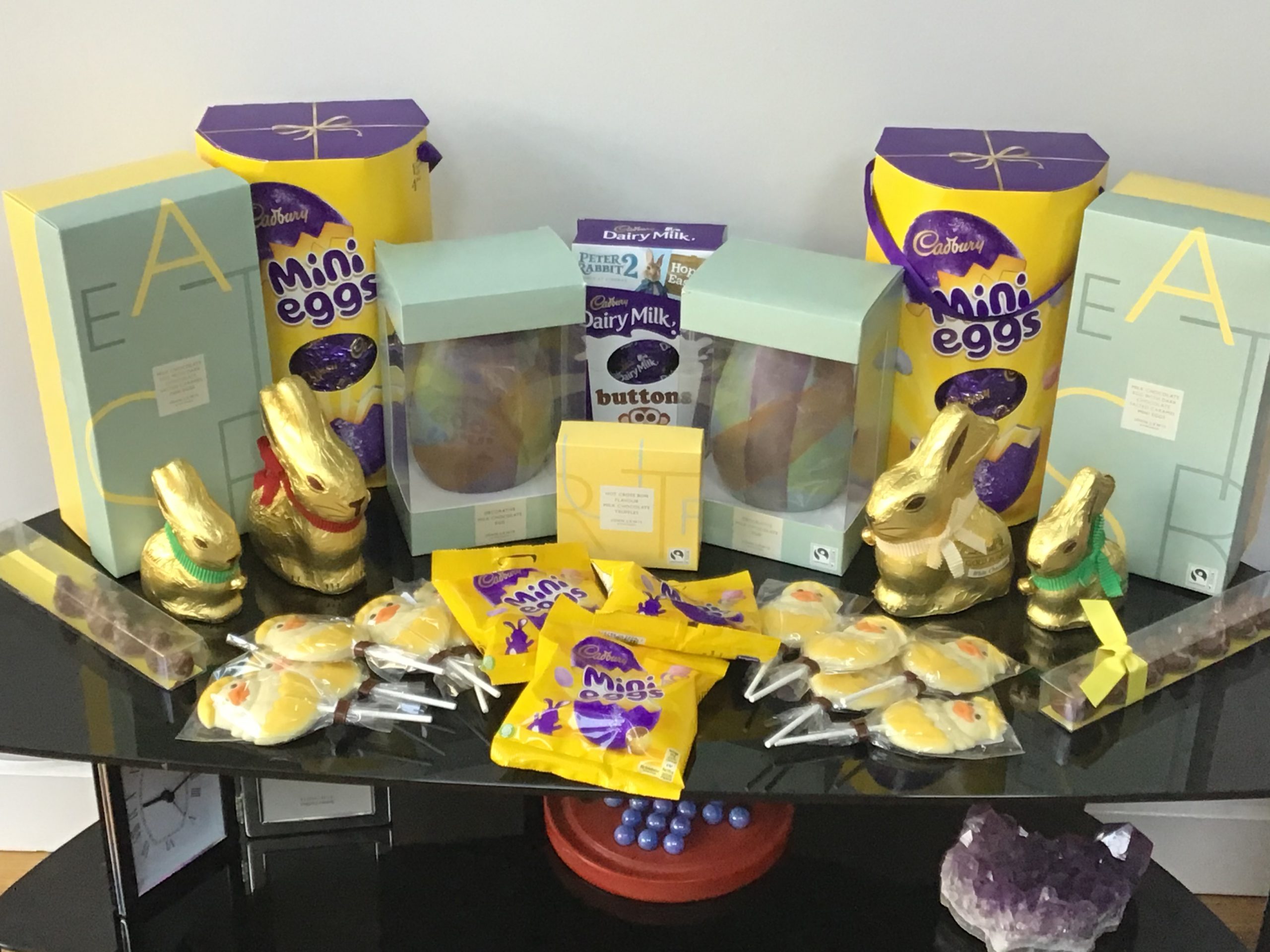 To be honest, I don’t normally put up decorations as we do at Christmas, but Dan’s girlfriend, Katie, bought this string of rabbits wishing a Happy Easter, which I thought were really cute. 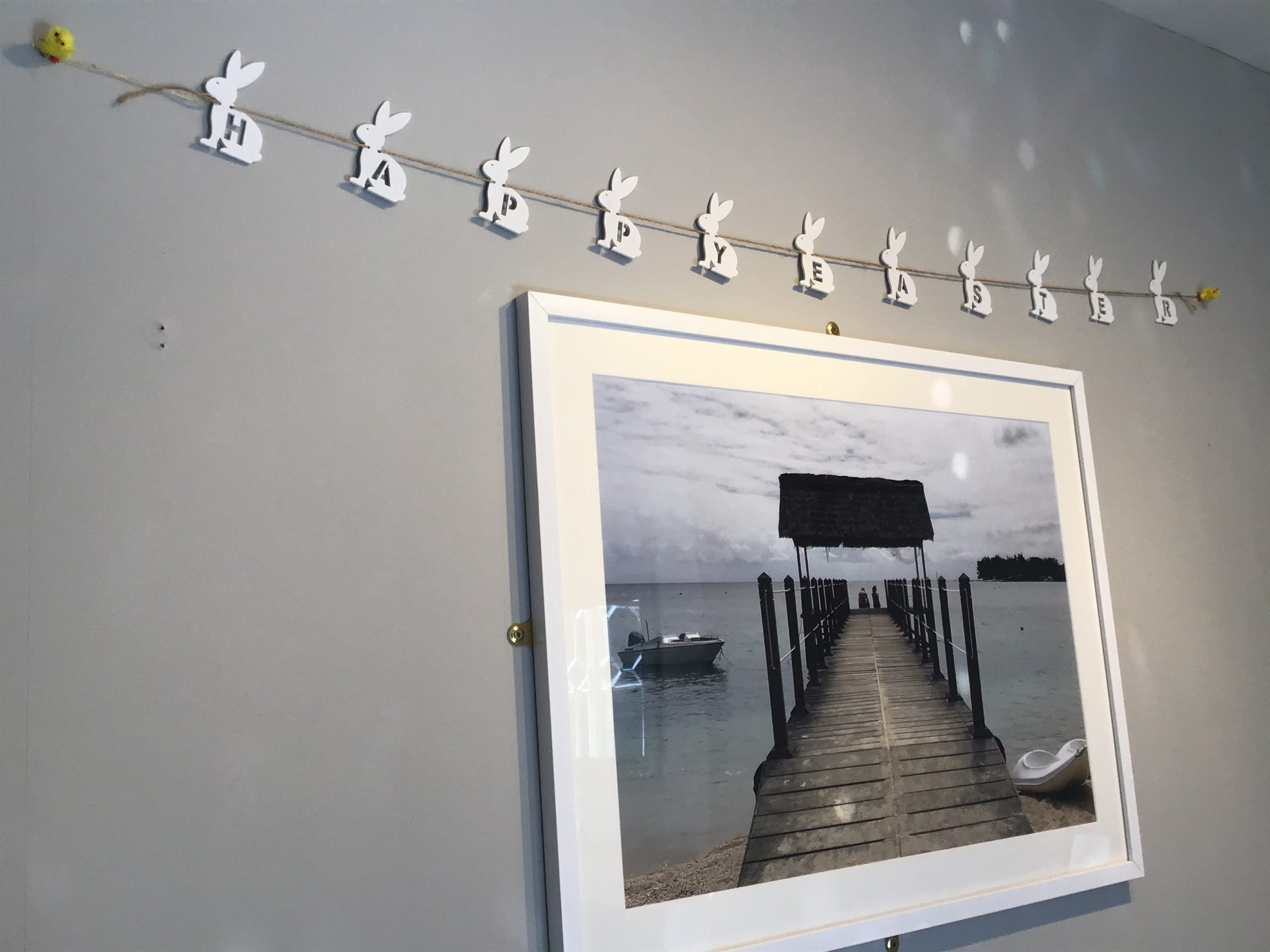 We decided to put them up above the photo of Chris and I, secretly snapped by our daughter Sophie, the day after our wedding in Mauritius last August. I’m not going to lie, that seems like a lifetime ago, but it’s good to have the memories of such a special day to look back on, particularly in these unprecedented times.

Putting the Easter bunnies up also prompted us (well, Chris, actually) to put the black and white wedding photos on the wall that Sophie and Reece had framed as our Christmas present. With our holiday in January, followed by my operation, we simply hadn’t got around to it, but I couldn’t bear the thought of reaching Easter with them still propped up against our bedroom wall. We’ve put one by the bed in our room and the one pictured at the top of this blog is in the family room. It was such a thoughtful Christmas gift idea, as was the wind spinner my sister Lynda bought us, also now in position in the garden. This one wasn’t from QVC, but we do sell them from time to time and they make a great addition to the garden as they twinkle and sparkle. 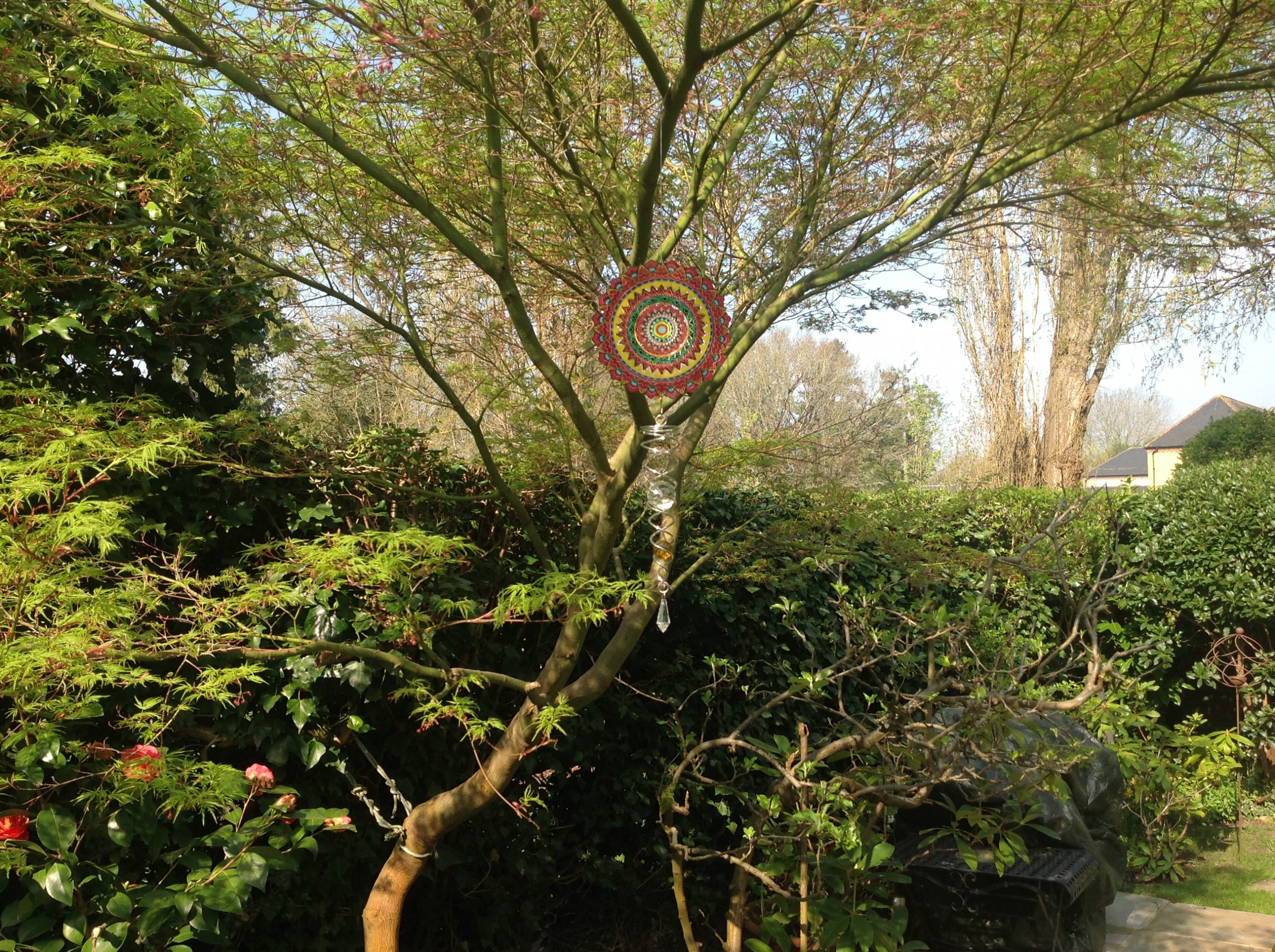 This is the time of year when those of us who are lucky enough to have outdoor space start to think about plants and you will be spoilt for choice this weekend on QVC. We have lots of gardening shows and two garden-related Today’s Special Values.

Tomorrow we have a collection of Whetman Pinks from Plants2Gardens – such pretty flowers and with a beautiful perfume, then on Easter Monday we have a cordless lawnmower and grass trimmer from Yard Force. It’s a good weekend to be shopping with us as we have a SHOP3Z code available from 9 p.m. tonight for the whole of the Easter weekend if you want to take advantage of great offers on three interest-free instalments. Check the website for full terms and conditions, but just to say, the code can’t be applied when shopping on the app or on QCut.

I wonder if you are planning a special menu to cook at home for Easter? I’m not sure we’ll be that hungry if we tuck into this chocfest, but I think we’ll be pacing ourselves with the chocolate as Katie is making ‘toad in the hole’ and I’m doing Eton mess for dessert when I get home from work. We’ll probably try and have another video call with Sophie, Reece and his children after dinner, as Pictionary last Saturday was hilarious, particularly with my terrible drawing! The first thing I had to draw was a canon – think about it for a minute and you’ll understand why I was in hysterics!!!

On Sunday we had our Fawlty Towers ‘event’ evening as the real one had been cancelled. 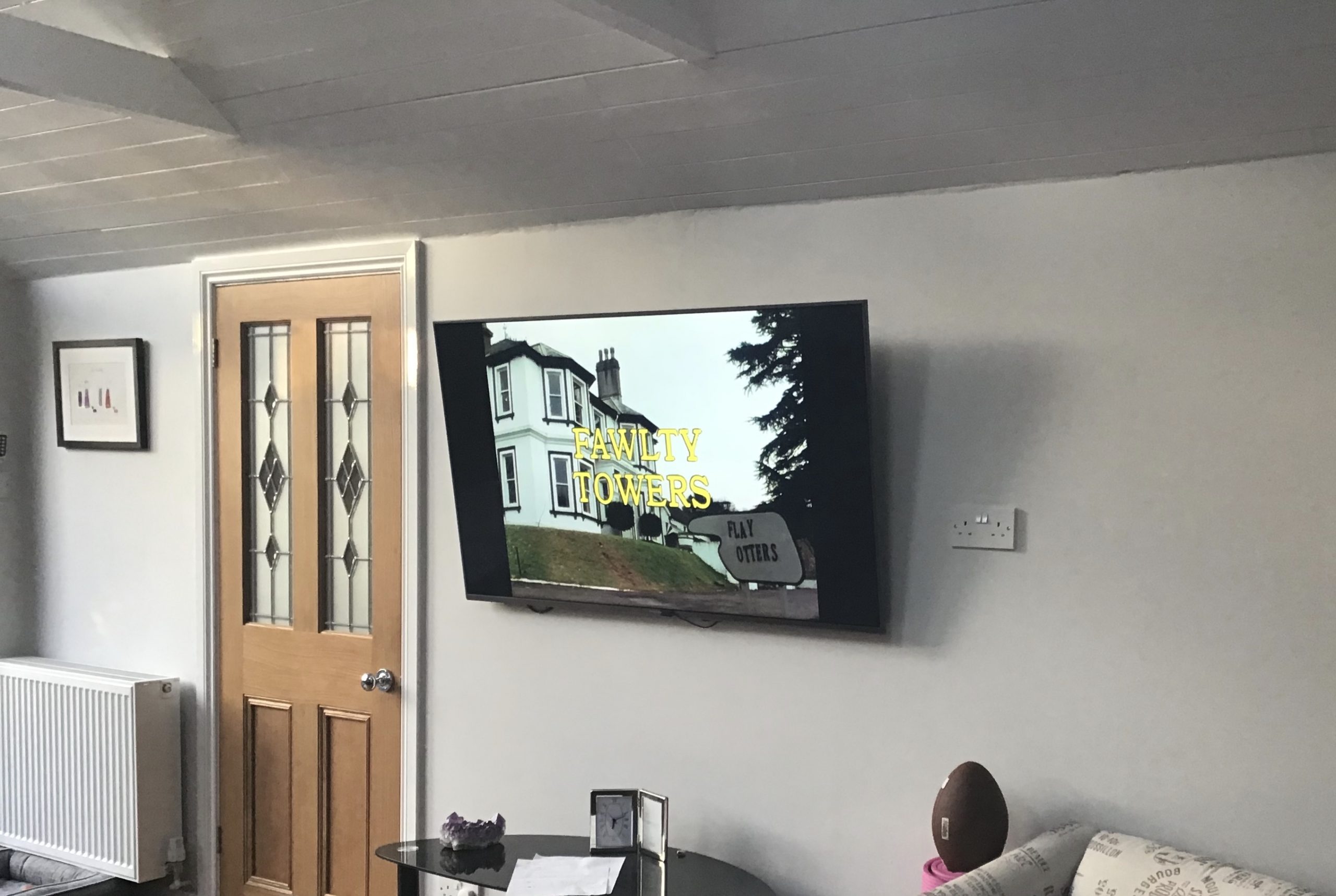 We watched four episodes of the classic comedy series on Netflix over the course of the evening. Our dinner started with Waldorf salad, which Dan and I made following Jamie Oliver’s recipe. 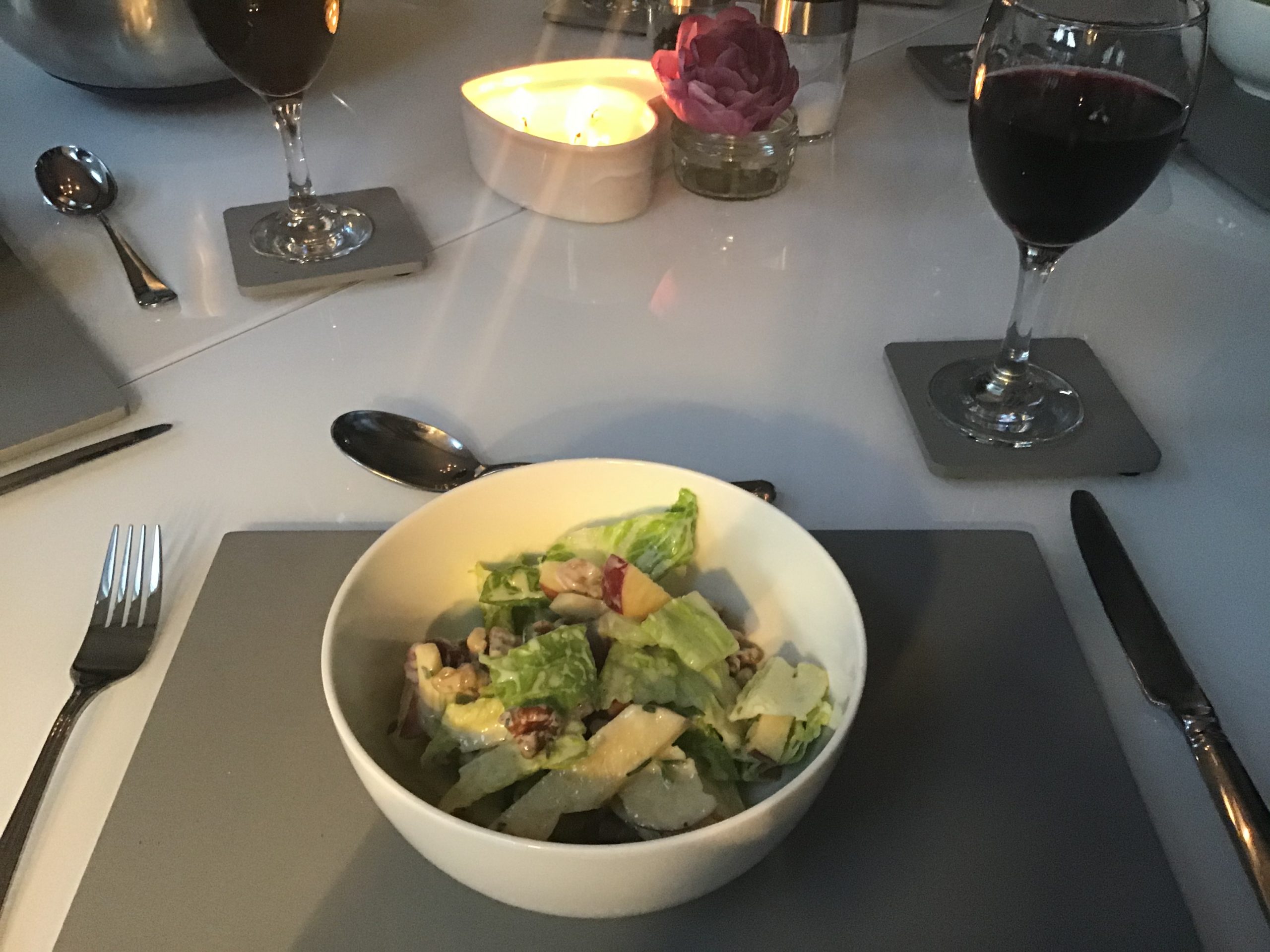 It was absolutely delicious, but was easily enough for eight people as a starter, so if you find it online, adjust the proportions accordingly. We didn’t waste what we didn’t eat – I picked out the lettuce which had gone soggy and put in fresh for us to finish on Monday lunchtime. 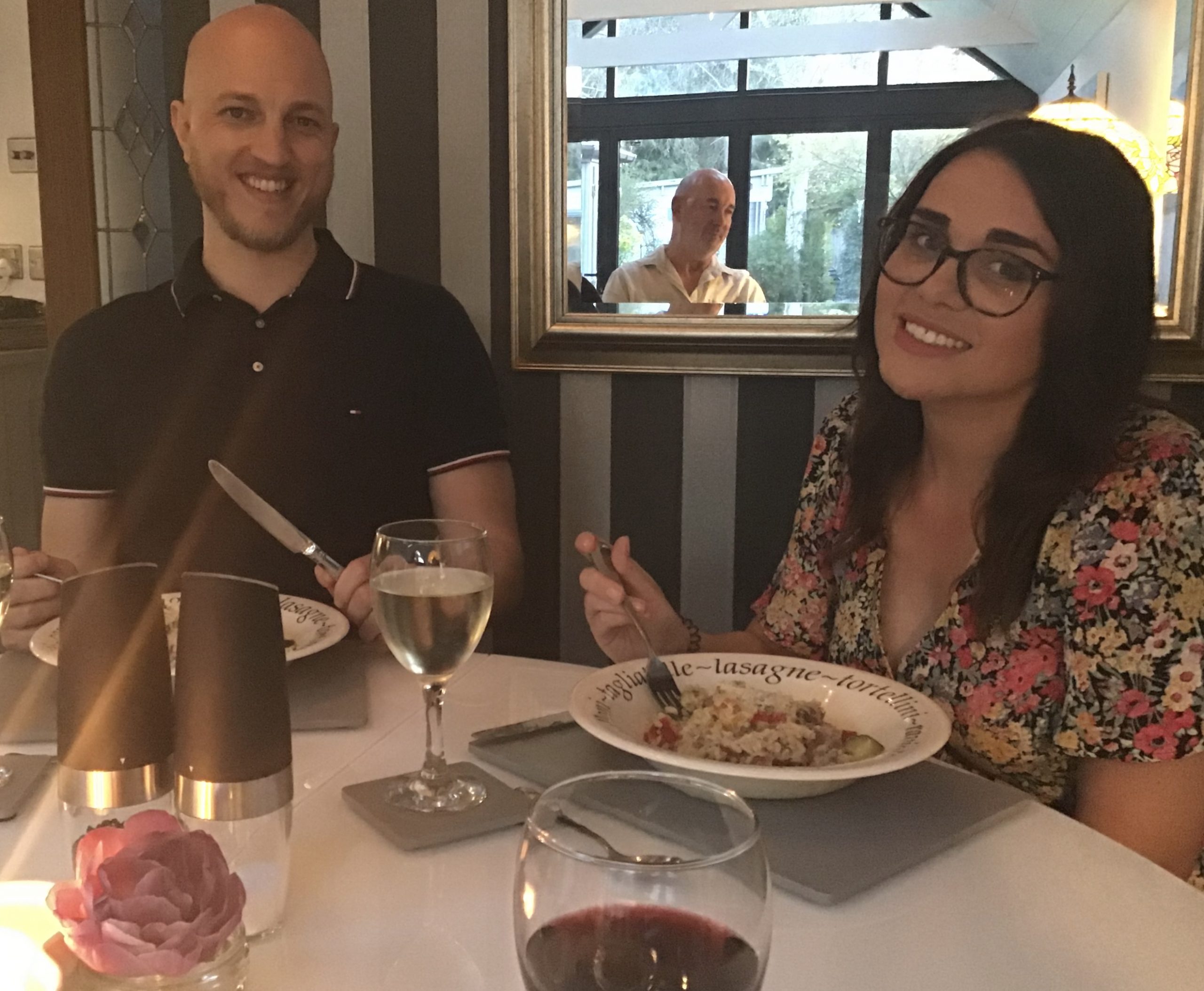 Our main course was courgette and chargrilled pepper risotto, which seemed to go down well with Katie and Dan – I didn’t realise there was a reflection of Chris in the mirror when I took the photo – and then we finished off with trifle. 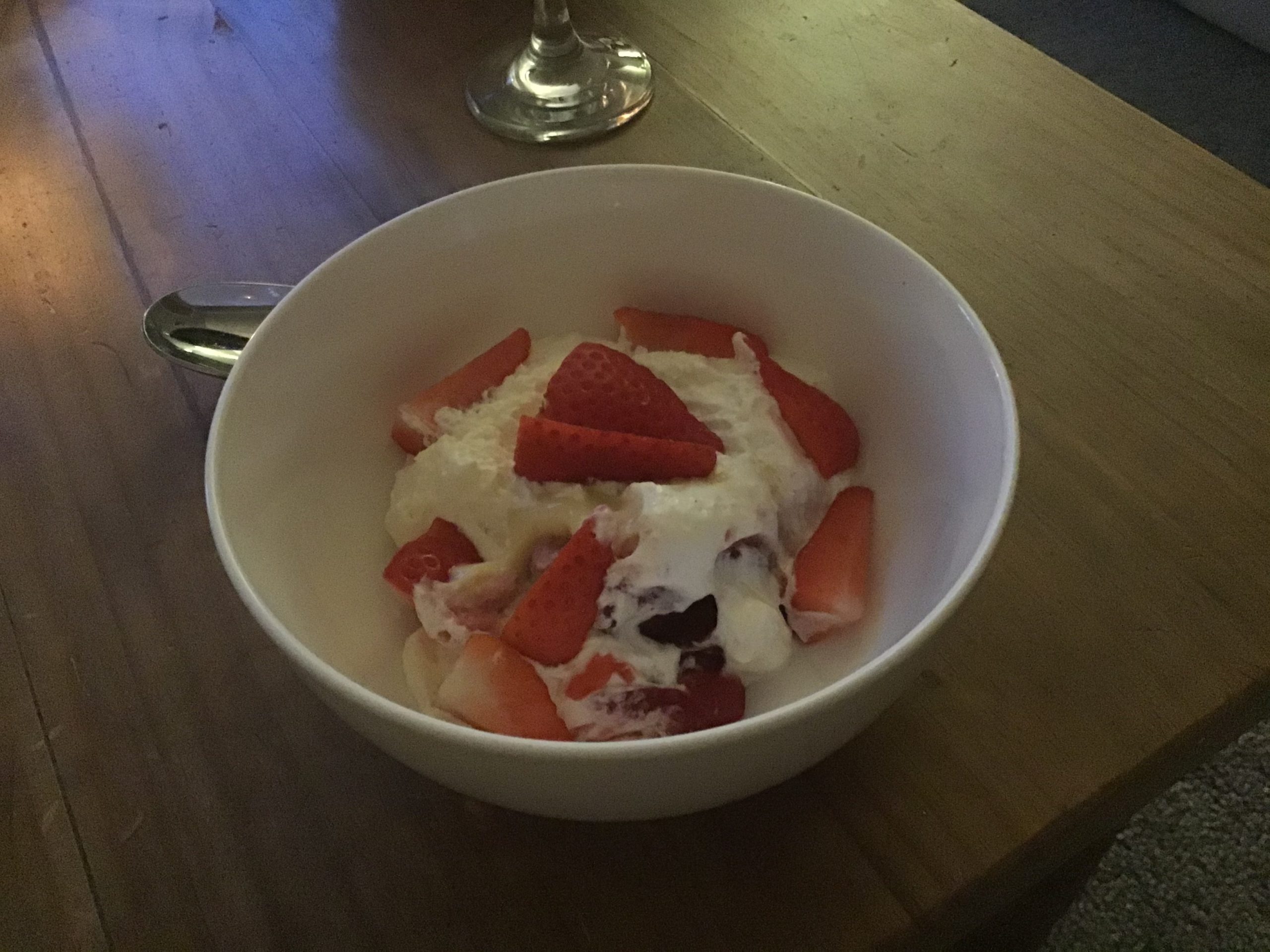 I’m so glad we made the effort and hopefully we’ll have the real ‘experience’ later in the year when everything is up and running again.

Talking of classic television, what could be more classic than Dr Who? Many years ago when I used to do extra work and small parts in television shows, I was booked for an episode of Dr Who where an old lady was transformed into being young again. As it was filmed, I assumed it had been shown, but apparently not according to @doctorwho1980’s on Twitter, who posted a short video from which this still was grabbed. 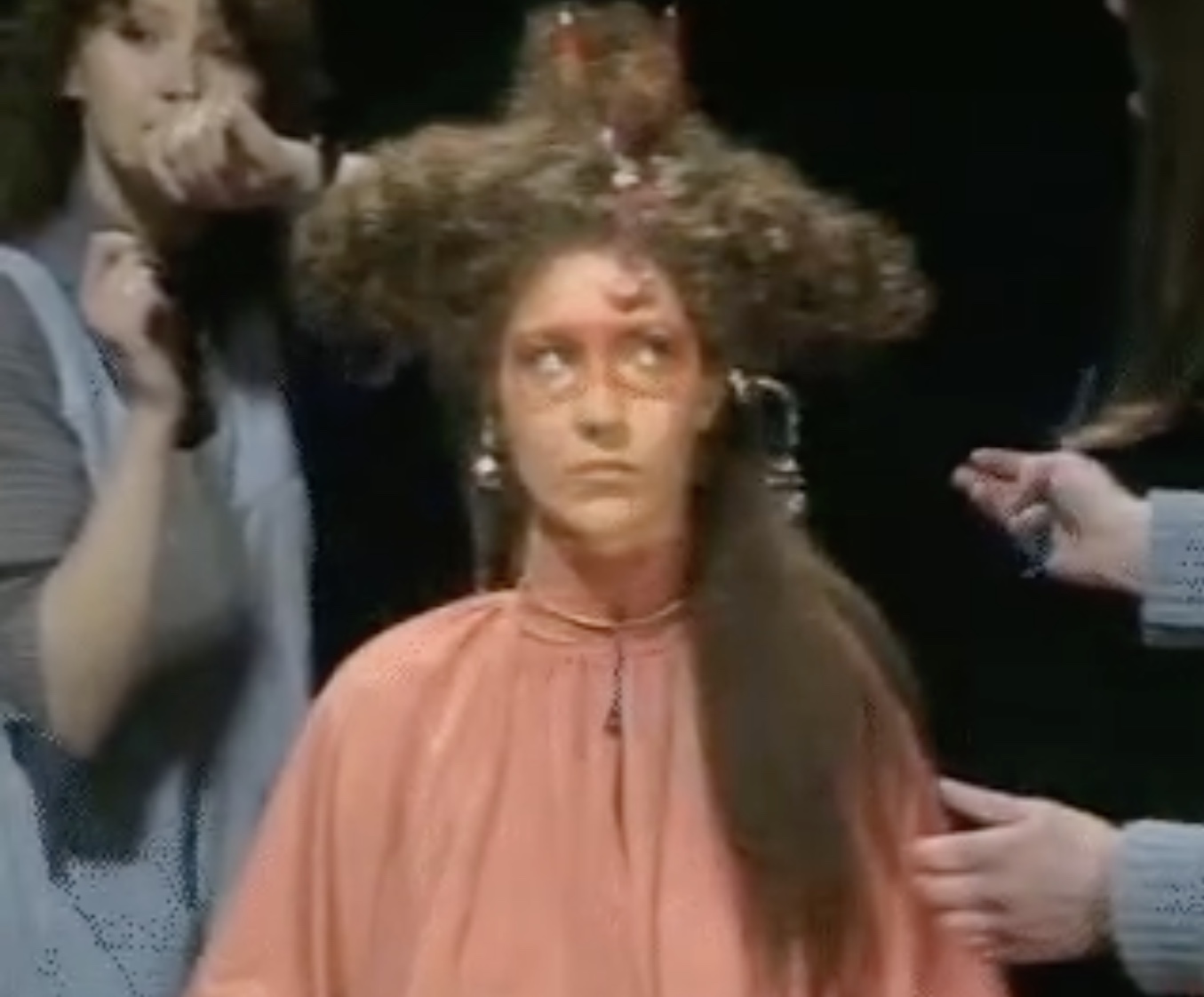 The funny thing is, I look exactly like my daughter Sophie and I’m not the only one to say it. Apparently, I filmed this nine days after appearing live on A Song for Europe in a group with Cheryl Baker the year before she joined Buck’s Fizz – the variety in the life of a freelancer in 1980!!!

So this week’s picture of Wilfie, aimed at bringing a smile to your faces, is him behind the Venetian blinds in our family room – apparently he had heard a fly buzzing around and was trying to catch it. 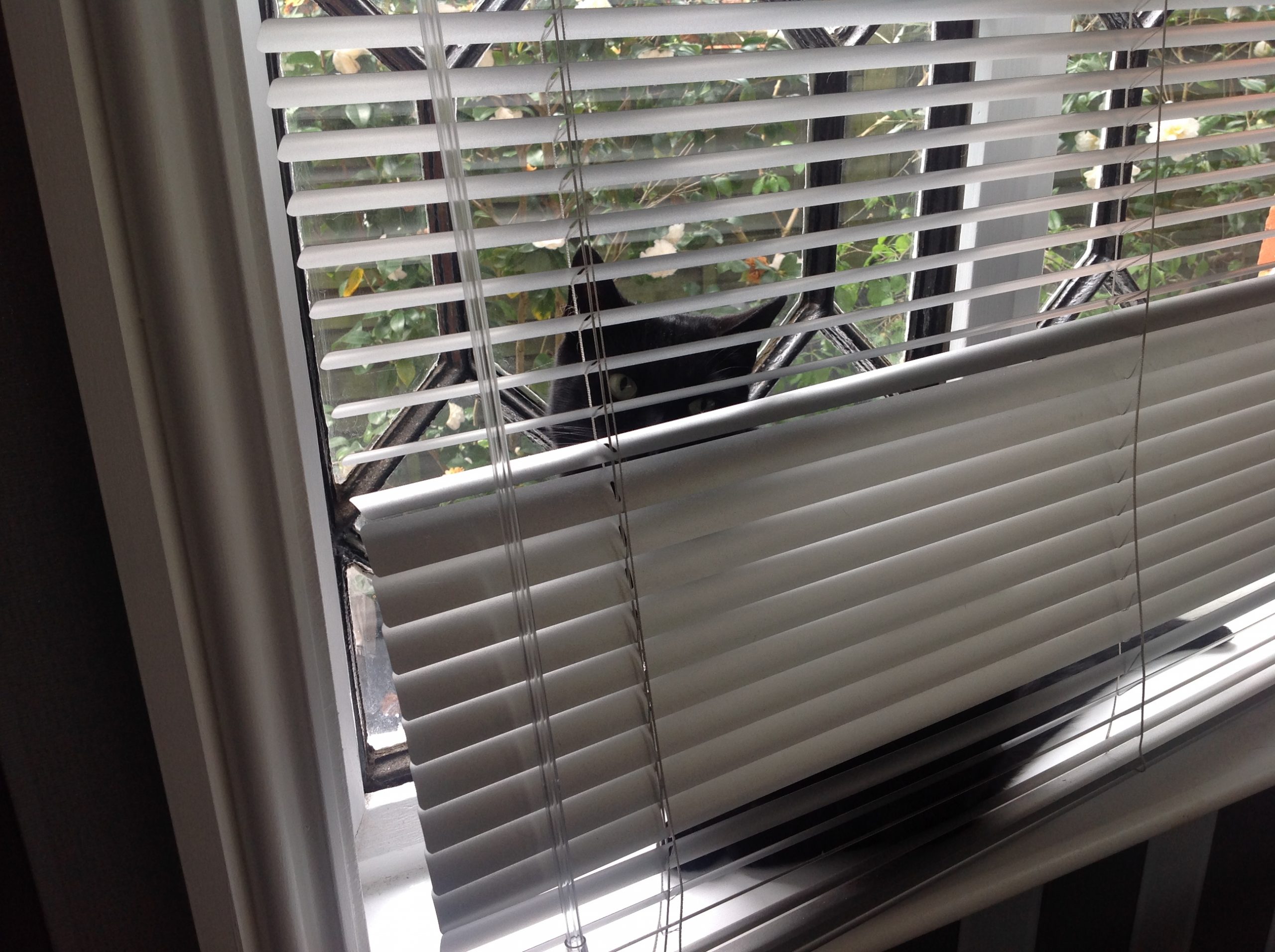 I’ll try and capture a video of him playing football with his mini foam basketball next week – he’s quite good at intercepting!

Well, I need to be heading into work shortly, but before I finish I wanted to let you know about the Giving Back Campaign. QVC has always been passionate about supporting charitable causes and you may have already seen on-air that we’ve launched an appeal with the National Emergencies Trust (NET). The company have pledged £50,000 to the NET’s Covid-19 appeal and have further committed to donating £2 for every £1 donation up to a further £50,000, making a total potential donation of £125,000. Please check our website for full details of how you can help us raise these vitally-needed funds to help support those most in need.

And if you’ve been downloading my ebooks to help while away the long hours of isolation, the final part of my Liberty Sands trilogy, It’s Never Too Late to Say… will be free for five days from this Saturday.