It wasn’t all bad 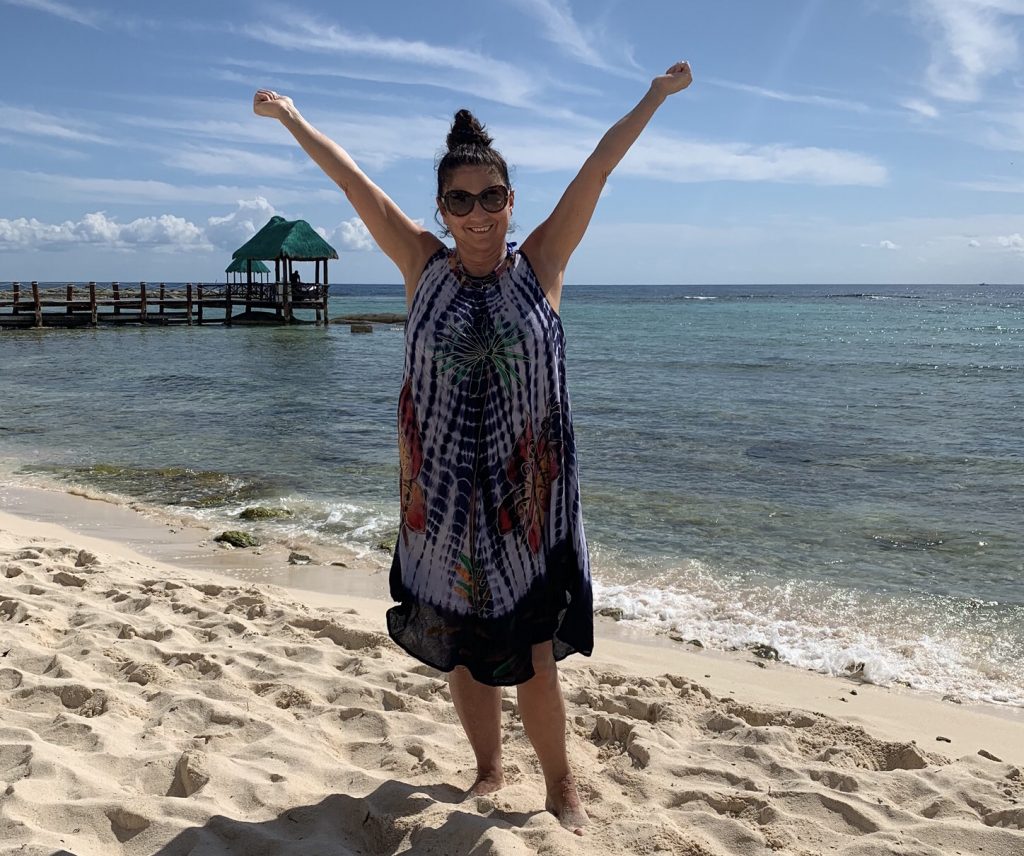 With everything that is going on in the world right now, it would be easy to write 2020 off as ‘a bad year,’ but looking back there have been some real highlights with wonderful examples of people doing some truly amazing things – Captain Tom springs to mind! And going to the doorstep to applaud our NHS for all that they do for us was another example of the spirit of ‘we’re all in this together’. On a personal level, I’ve had some highs and lows (like most of you reading this) but I thought I would concentrate mainly on the highs for my round-up of 2020.

January – we booked a last-minute holiday to Mexico, prior to my planned ankle surgery at the end of the month. When I say last-minute, we booked it on the Saturday and were on the plane the following Wednesday! As things have turned out, that’s the last time Chris and I were on a plane. It was exactly what I needed to prepare me mentally and physically for my operation and also gave me a couple of hours writing time each day to finish the first draft of the third book in my Rachel Hart crime thriller series. Funnily enough, something that happened there gave me both the inspiration and the opening chapter of my ninth full-length novel which I’m currently writing… everything happens for a reason, so they say!

Within days of our return, I was in theatre having the operation to change the position of my left heel (it involved breaking the bone and inserting metal to help re-align), having some excess bone removed and artificial ankle tendons as mine were badly frayed and apparently could have snapped at any point.

February – the operation had gone well, and after the first few very painful days (I’d refused heavy-duty pain killers as I don’t react well to them) everything had settled, and I was moving around on my crutches pretty well. The cast came off after two weeks to be replaced by an aircast boot which wasn’t very comfortable particularly sleeping in it at night. Even at that early stage in my recovery, I had my first physiotherapy session and was determined to ‘get back on both feet’ as quickly as possible – then disaster struck! I got one of my crutches caught in some bedding and fell with the crutch cuff still around my arm. I broke both forearm bones (the radius and ulna) at the left wrist, but fortunately they were clean breaks according to the X-ray. After an anxious 24 hour wait where I kept my fingers crossed (on my right hand, of course) that I wouldn’t have to have a plaster cast, I was told that I could keep wearing the splint the hospital had given me, provided I didn’t use my left hand. We had to buy a different crutch, one that I could rest my whole forearm in, and we hired a wheelchair for getting to my physio appointments and also to the charity quiz night organised by my daughter, Sophie’s dance teachers. The photo is of us celebrating after winning both the quiz and an ‘actions to music’ section in which Chris and Reece used my crutches as giant flutes! 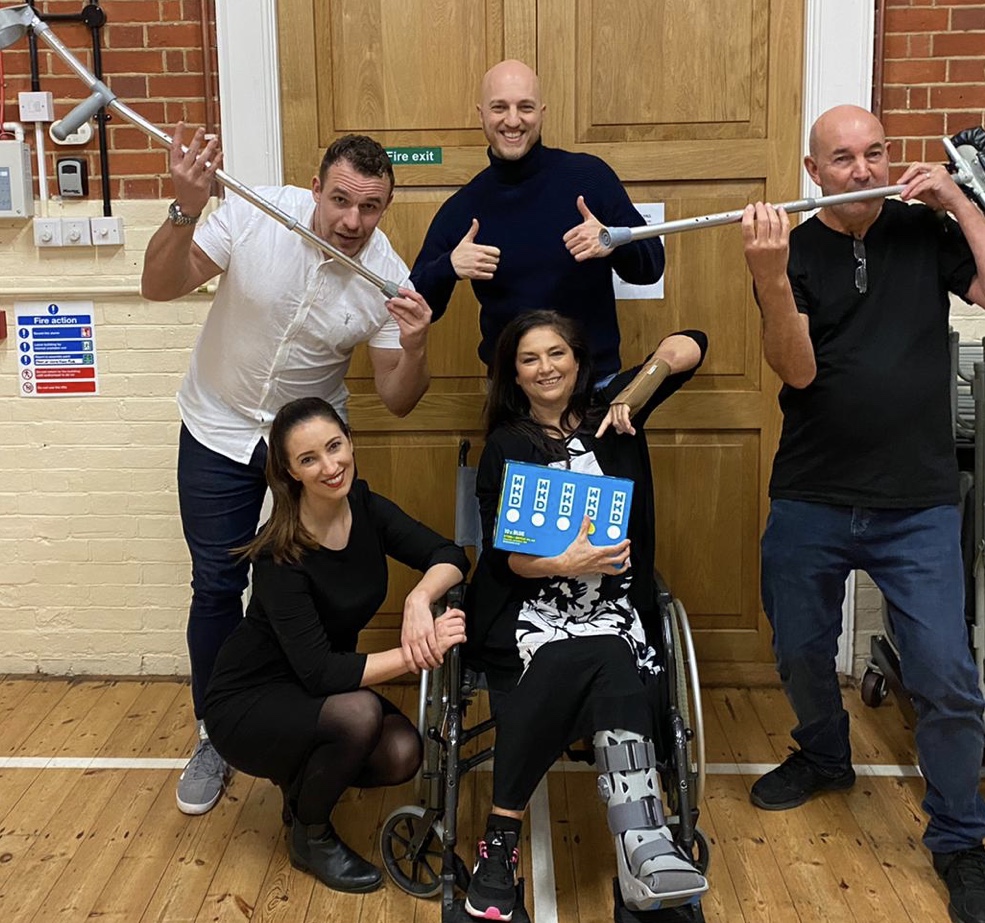 By March, I was able to go for my first walk wearing an ankle support rather than my cumbersome airboot – you can see how happy I was, even though it was only to the end of our lane and back, not far at all. I was really looking forward to getting back to work as I’d been more or less in my own personal lockdown for eight weeks, then the whole country was locked down due to the pandemic. It made me even more determined to get back to work to help provide an alternative to the constant news updates for those that wanted it. 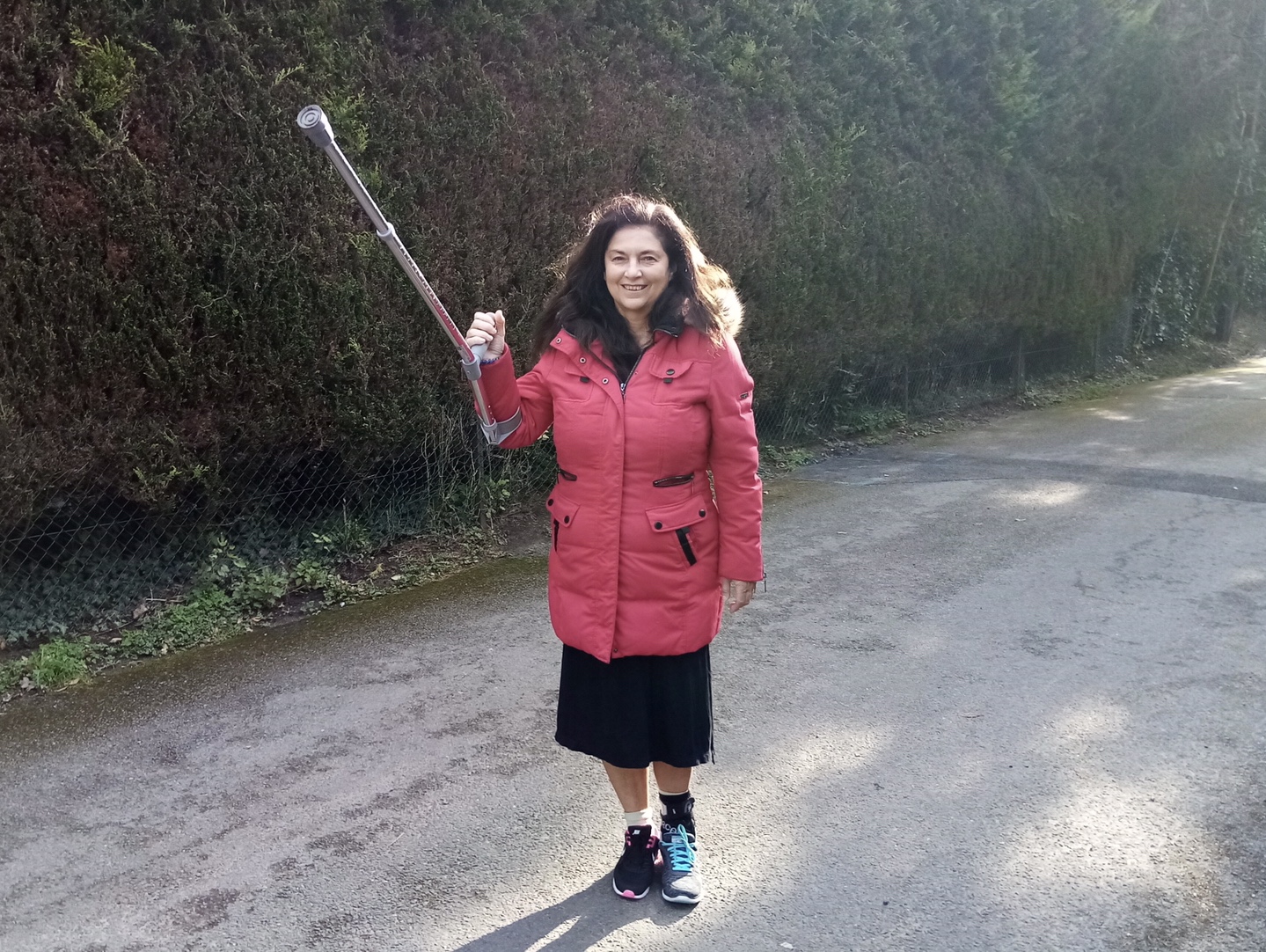 I returned to QVC on April 2nd and as soon as I’d got used to being back at work I started to plan a QVC quiz, an idea I had after taking part in Jay’s Thursday night pub quiz – did anyone else do that? We did it all the way through lockdown after our weekly ritual of clapping on the doorstep. We always did a FaceTime with Sophie and her family afterwards to compare scores and answers – we got our neighbours involved too.

May – having planned my QVC quiz, with an enormous amount of help from our son, Dan who set it up as a Powerpoint presentation for me, we did the first one in mid-May and continued with it until the end of June. I’d be lying if I said it wasn’t an enormous amount of work, but I really enjoyed it and hope you did too if you took part. May also saw the publication of Why She Died, while behind the scenes I was working on a couple of new ideas to pitch to my editor. 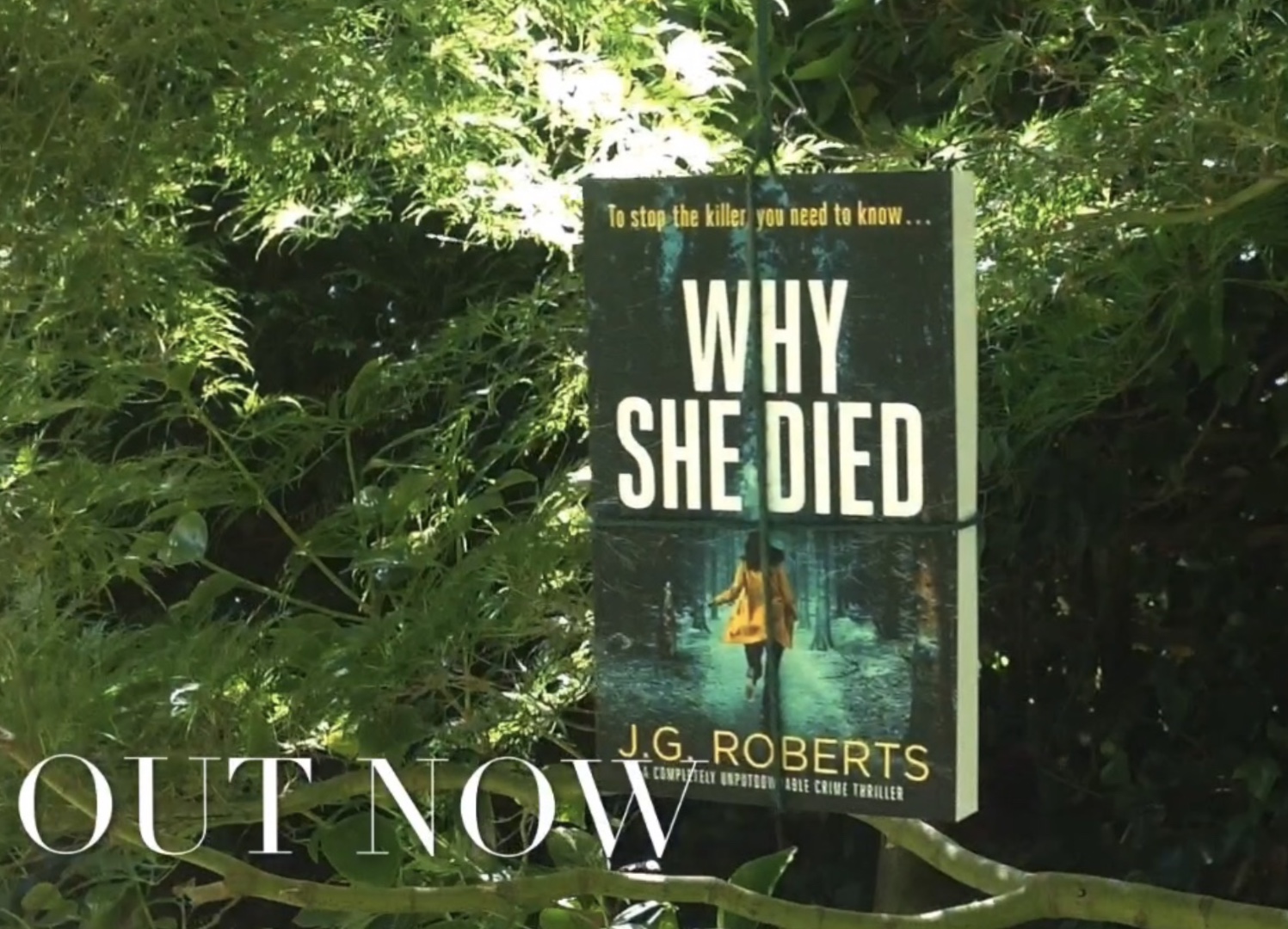 June – my editor liked the ideas I had pitched, and I signed a new two-book deal with Bookouture, the first of which is out next month. It was also my birthday and thankfully some of the lockdown restrictions had been eased so we were able to have a socially distanced barbecue in the garden with Sophie and family as well as Katie and Dan. How amazing was this cake that Katie and Dan made? Tasted great too. 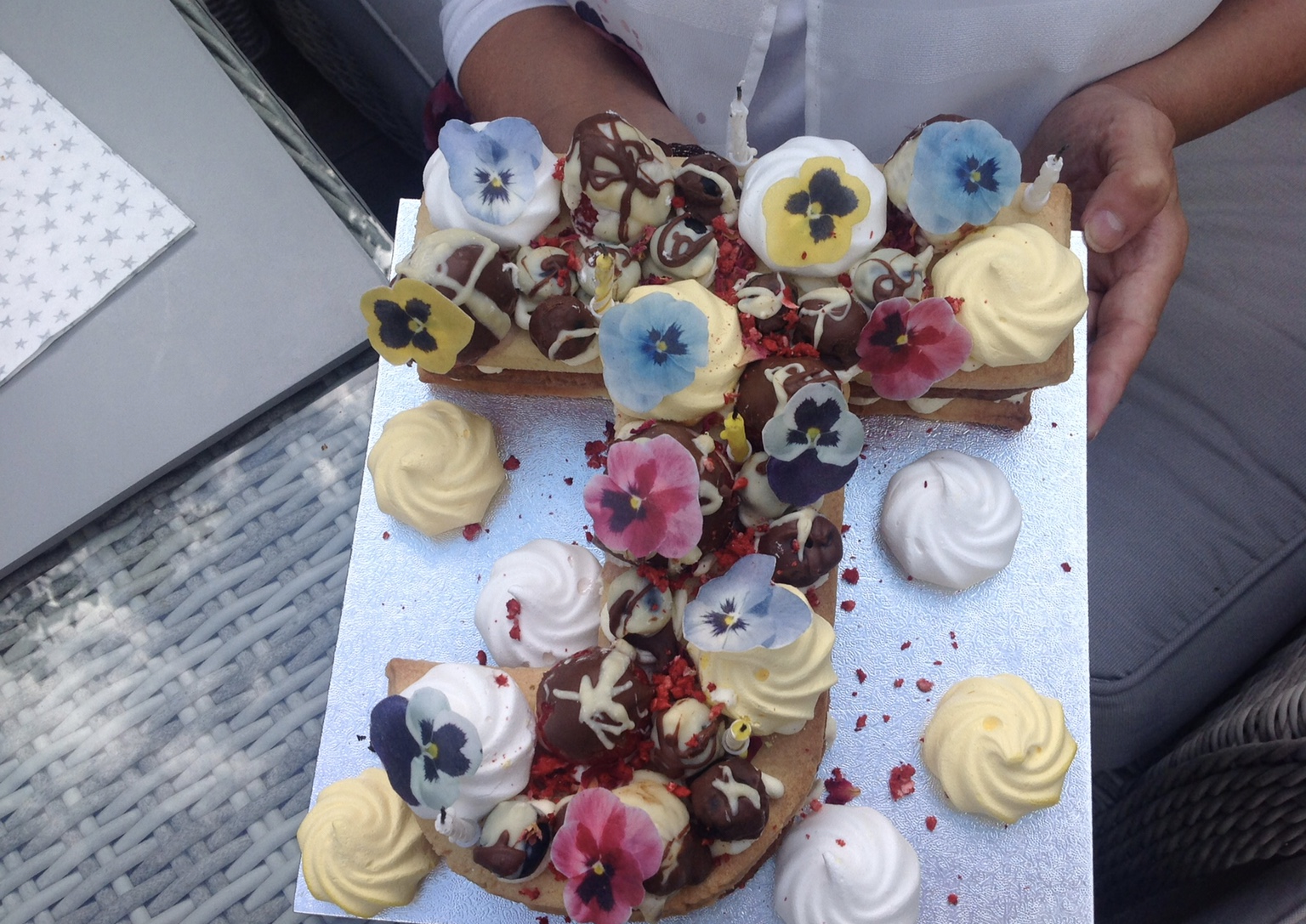 Earlier in the year we had cancelled the booking we made for a villa in Spain for a joint family holiday. As we had all already booked the time off from work for the end of July into August, we decided we would still holiday together but at Debbie Flint’s retreat in Devon rather than Javea. We weren’t all there for the whole time, but the crossover days were enjoyable with days lazing in the garden and evenings playing card games and also Jenga and Articulate. The weather was a bit of a mixed bag, but we were able to get to the coast at Bude a couple of times and a small place called Instow, where I particularly enjoyed walking along the flat beach, albeit wearing my trainers and ankle brace! 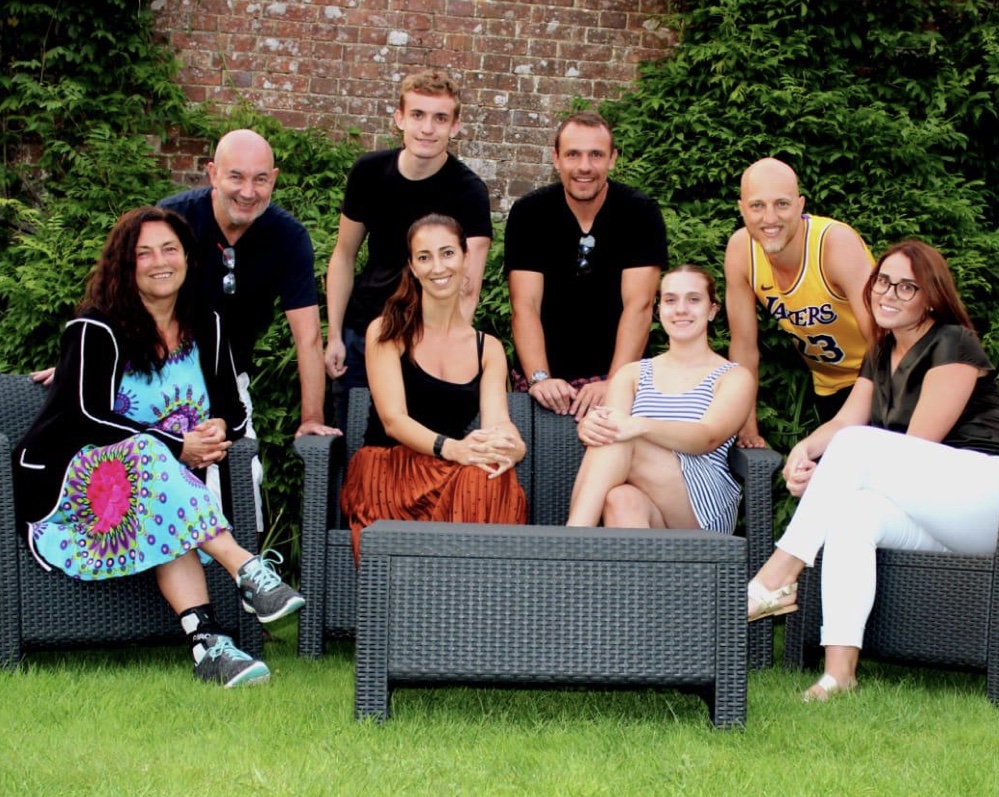 August – Chris and I celebrated our first wedding anniversary. We’d been hoping to have a party for the people who weren’t able to come to the wedding in Mauritius but decided it wasn’t sensible, especially for our elderly mums. So, it was low-key affair, but we were treated to another Katie and Dan fabulous cake creation! 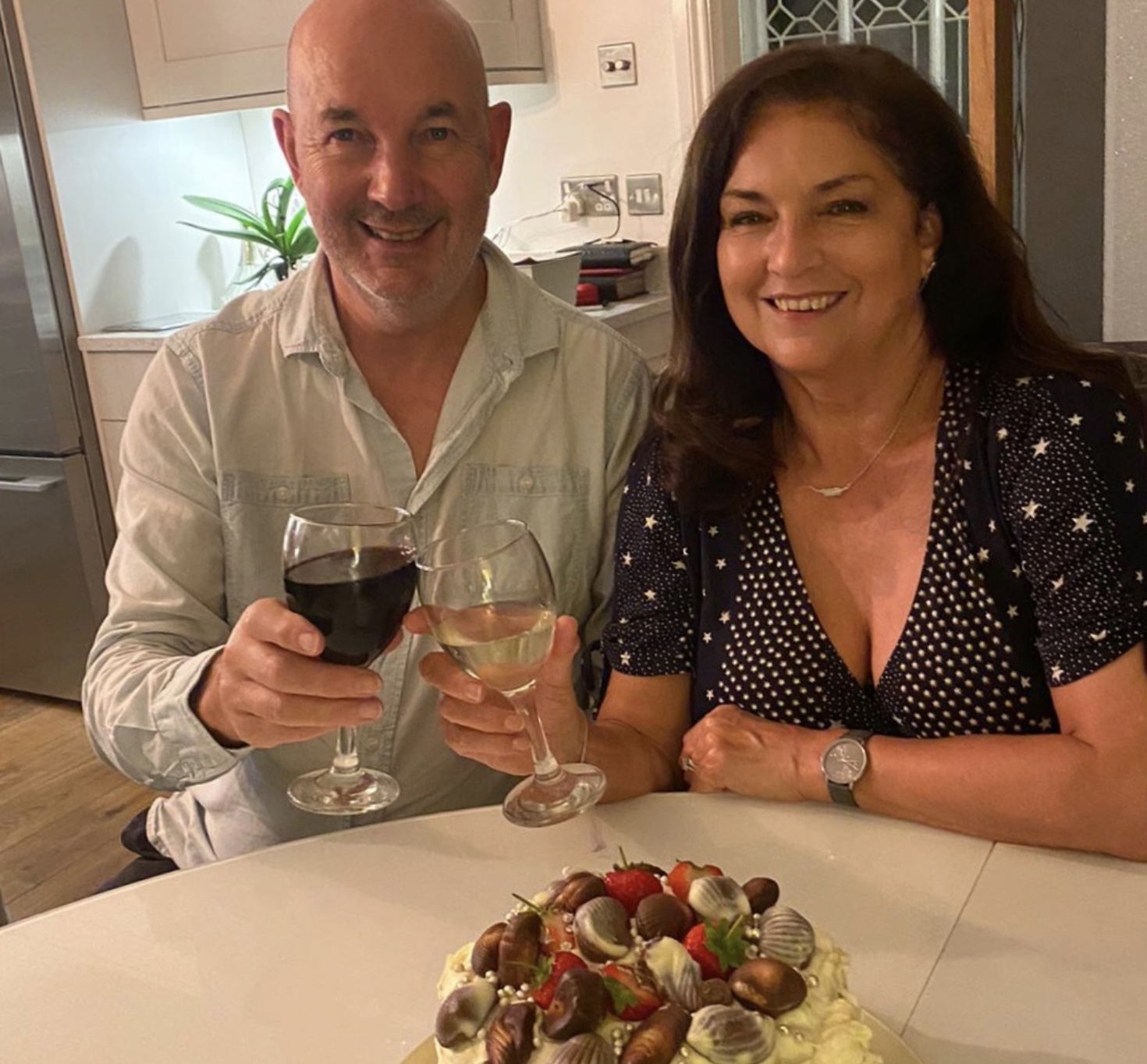 It also featured chatting to Will Gowing on the QVC podcast. Although I’d been on one of the very early episodes alongside QVC’s CEO, Rob Muller, that had been to talk about my memories of QVC as I’ve been with the channel from the start. Episode 49, (still available as they all are if you fancy a listen) was more about my personal life, my career path that led to QVC and more latterly, my writing career. As an aside, two of the people I worked with in the early days of my dancing career have recently passed away. I did my first summer season in Guernsey with Cannon & Ball in 1973, and pantomime in Croydon with Barbara Windsor in 1978/79 – both are a big loss not only to their family but to the entertainment industry. By the way, you can listen to Will’s latest podcast here – it’s a round-up of his year of interviewees. 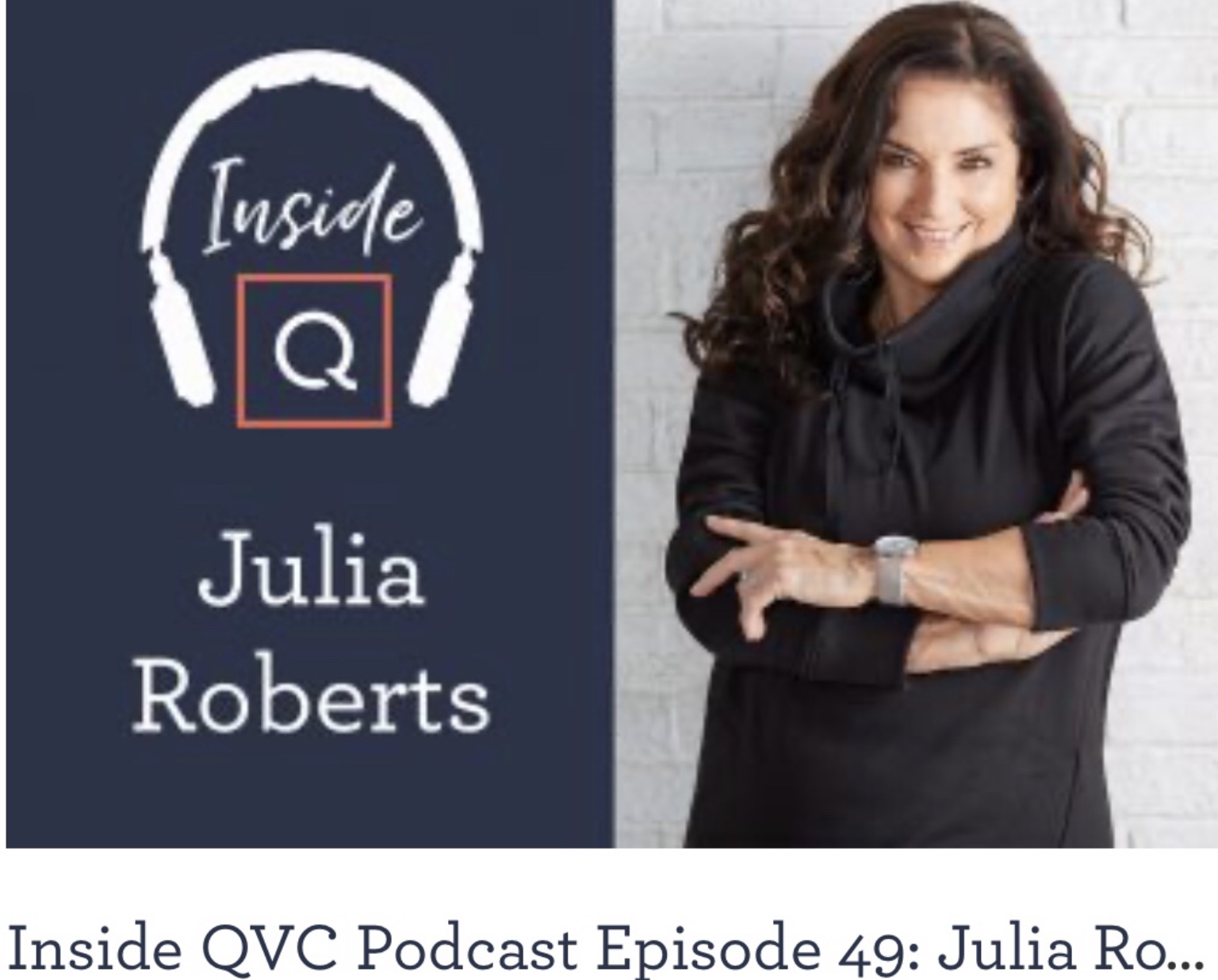 September saw us attending the funeral of Chris’s uncle in Spalding, making us acutely aware of the restrictions around numbers permitted to attend. My heart goes out to you if you’ve had a similar experience this year. Later in the month we managed a few days away on our own, staying at Katie’s family’s flat in Wells Next the Sea in Norfolk. It was a first for both of us, quite strange really considering its proximity to both Spalding and to a lesser degree Nottingham. Although it was quite breezy, we were blessed with sunshine on four out of our five day stay and I would highly recommend the area if you like vast expanses of unspoilt coastline.

October saw QVC celebrate its 27th birthday and was also the month my next book, My Mother’s Secret, became available on pre-order. It’s very different from the crime thrillers I’ve previously written for Bookouture. It’s an emotional family drama centred around a difficult relationship between Danni and her mother Diana. Most of the early reviews have referred to it as a ‘tearjerker’ and recommended having a box of tissues handy – I must confess there is one scene which even I couldn’t read without shedding a tear… and I knew what was coming! 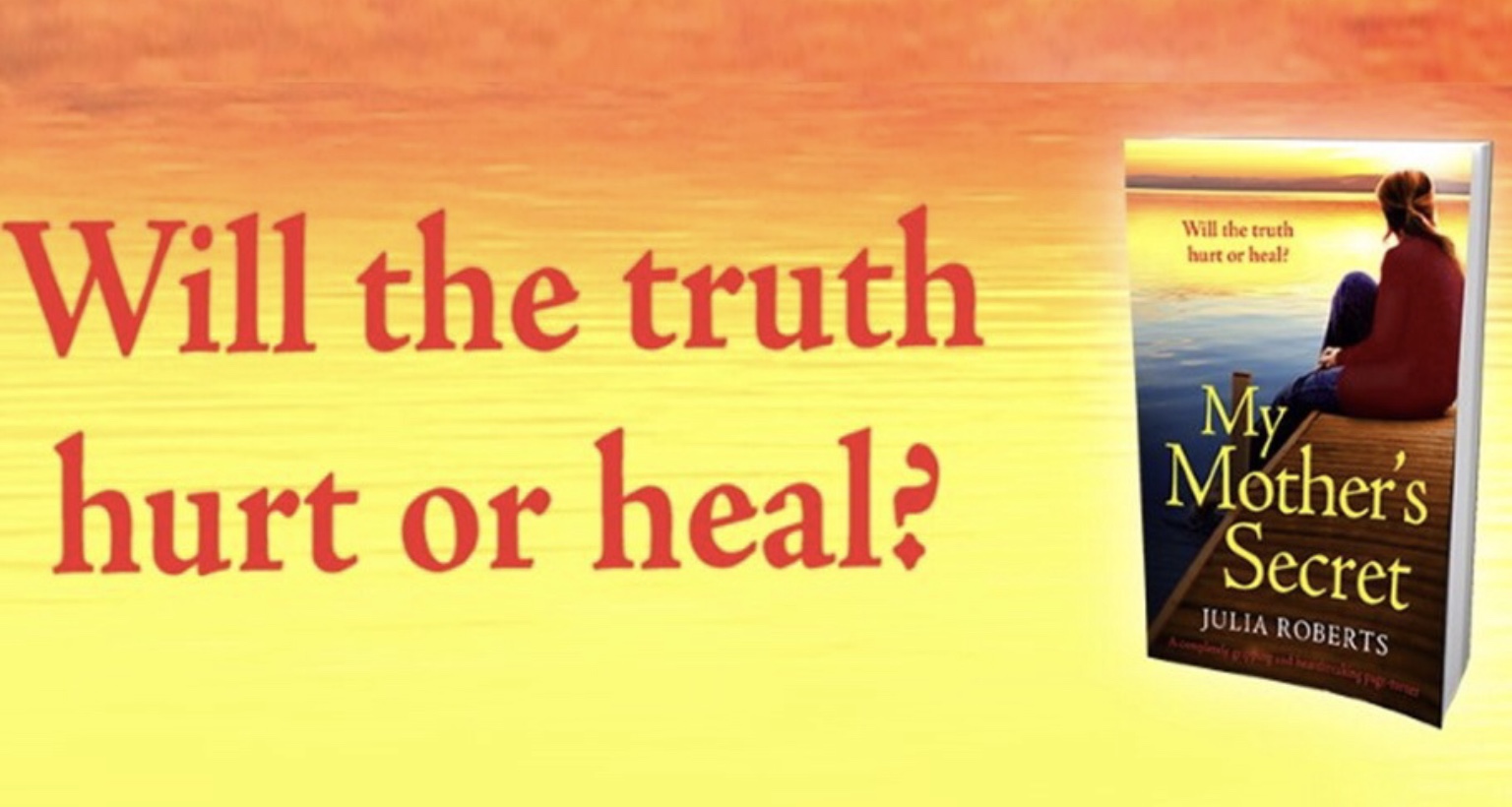 Early November saw us go back into lockdown and saw Katie move back in to live with us as she had during the first lockdown – it’s such a difficult time for dating couples if they are unable to see each other. Dan’s birthday is the end of November so she wouldn’t have been able to see him for that if she hadn’t – it’s a good job she stayed on when lockdown finished, or we wouldn’t have been able to have her at Christmas either and would have missed out on her delicious Nut Wellington!

We tried to make Dan’s lockdown birthday a bit special by having a themed ‘New York’ night, with a hint of American football thrown in – don’t mention his team, the Patriots, as they haven’t had the best of seasons! We did (veggie) burgers, truffle oil fries and corn on the cob, all washed down with American beer and followed by a piece of chocolate/orange birthday cake that Katie made. The only downside was that his sister couldn’t be with us as she normally would. For me, those are the moments that re-enforce my determination to stick to the rules so that we can return to a semblance of normality sooner rather than later.

And so, we find ourselves in December with 2020 almost behind us… although I think we would be wise to manage our expectations for 2021. Christmas was the four of us in our household with FaceTime calls to Sophie and her family, which included a hilarious game of Play Your Cards Right, hosted by Dan and ably assisted by Katie. We also did a FaceTime with my 94 year old mum – I’m really impressed that she’s been able to do these calls on Dan’s old iPad without getting flustered – and a What’sApp video call with Chris’s mum, which she loved, so I’m guessing there will be a few more of those in 2021. 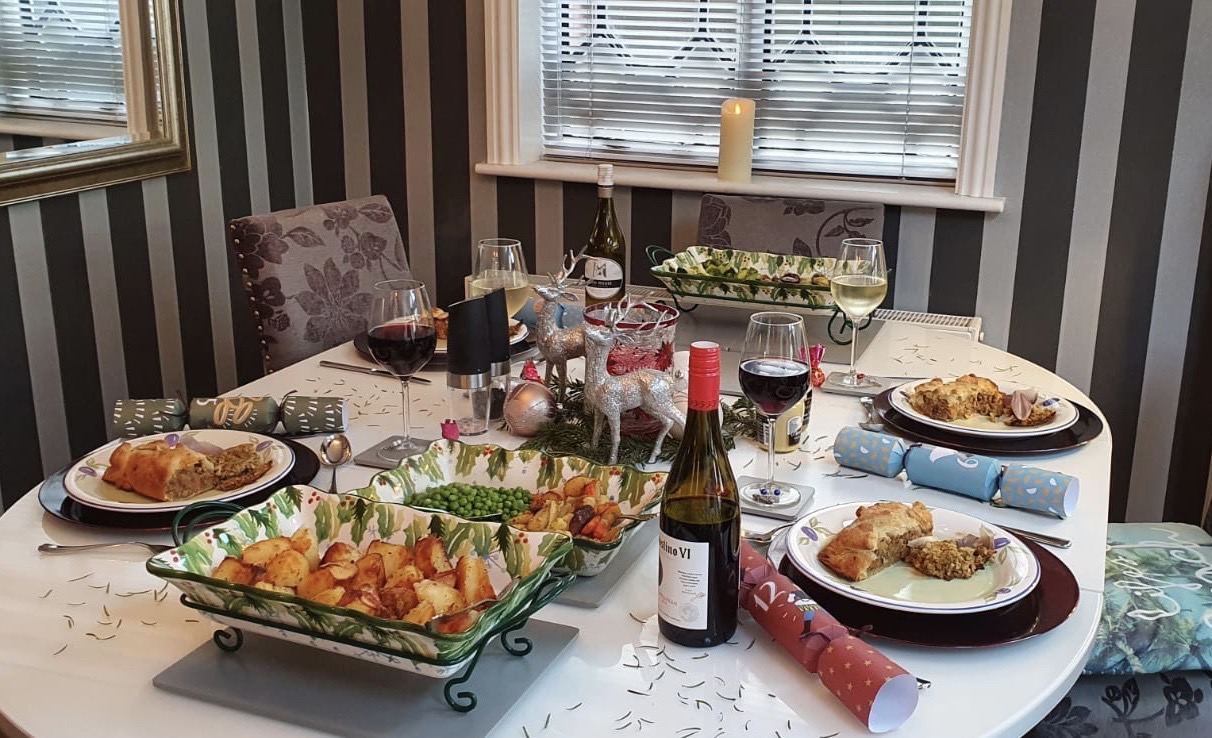 So, that’s my round-up of a pretty difficult year for all of us. Again, I’d like to thank you for watching, shopping and commenting on here and also my social media platforms – you’ve helped us to feel that keeping going through this crisis, despite some concerns in the early days, was the right thing to do, and QVC have made our working environment very safe. No doubt 2021 will bring its challenges, but if we stick together and try to show consideration for others, we’ll get through this. 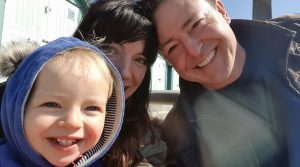 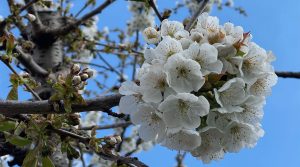 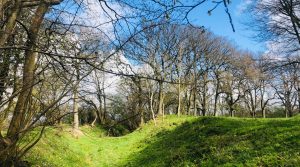